It's unusual for Kevin to have a three-day weekend for Martin Luther King's birthday, but lucky for us, this year his office was closed.

The weather's been bitterly cold and we even got a dusting of snow (that melted before morning).  The kids wanted to show Kevin their new ice skating skills.  Having already reached my skating quota for the week, I enjoyed a second cup of coffee in our toasty apartment while the three of them hit the ice.  We all met up at the brand new Titanosaur exhibit at the American Museum of Natural History in the afternoon. 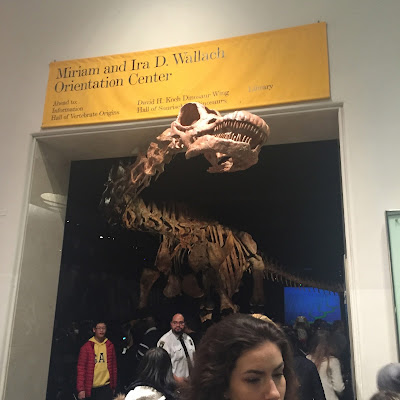 It's one of the largest dinosaurs ever discovered and is so big that it couldn't even fit into a single room in the museum.  Its head is poking out of the front door.  I would have preferred to wait until the crowds died down in a couple weeks to check him out since everyone and their brother was there the first Saturday he was on display.  But of course the kids were having none of that. 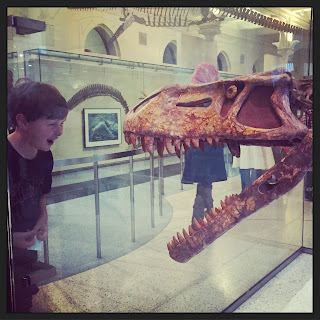 Because the kids were so excited about their new class at the Cathedral of St. John the Divine last Friday, Kevin and I thought it might be interesting and even fun to go to a real church service there on Sunday.  So Sunday morning we got up early and walked up the hill to the church. 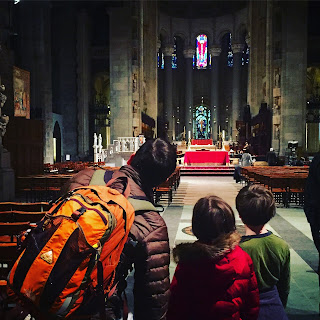 It was the very first church service the kids had ever been to (and maybe my third or fourth) and I think they were pretty impressed.  The ushers must have spotted us as newbies because they led us right up to the front row of the imposing cathedral.  It was a very nice service with singing accompanied by the massive organ, and a sweet sermon about some of the leaders of the Civil Rights Movement, given the proximity to MLK Day.  I have to admit that I felt a little like an interloper, knowing I was there purely for the experience and not for any religious reasons, especially when a kind woman behind us approached us after the service and told us all about the Sunday School for children downstairs and that she hoped to see us next week. 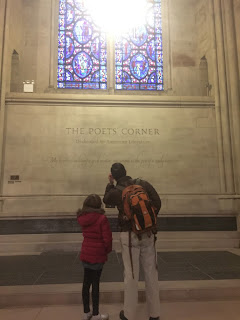 After the service we spent almost another hour just roaming around the enormous cathedral.  It just kept going and going, with room after room, chapel after chapel.  The church was hosting several art exhibitions, including some modern art, so it was like being in several museums at once.  I'd love to return to take one of their guided tours. 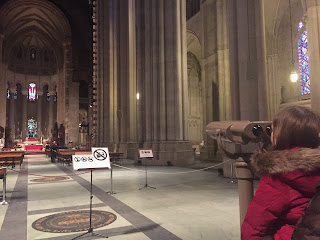 On Monday we took advantage of the fact that Kevin was home on a weekday and took a tour of the Federal Hall down on Wall Street.  They only offer tours on weekdays and we've been wanting to go but didn't want Kevin to miss it.  And the timing was perfect because the kids had just finished talking about the Constitution in their History class, and the Federal Hall in New York is the site where George Washington was inaugurated as our first president. 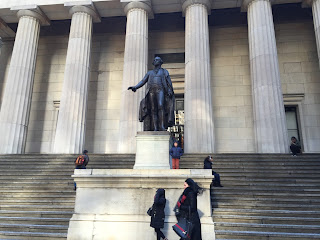 The building is part of the U. S. National Parks Service so the tour was free and led by a park ranger.  The statue above is in the exact spot (and elevation) where Washington stood to take his oath of office.  We got to see the very Bible that he put his hand on to be sworn in, which was the highlight of the day for me.  It's been used four or five times for other presidents to be sworn in, the most recent being Jimmy Carter and Bush Sr.

The kids were really into the tour because not only was the ranger incredibly knowledgeable and personable, but because this is the exact time in history that they're studying right now and it really helped to bring it all to life for them. 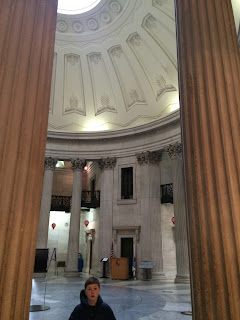 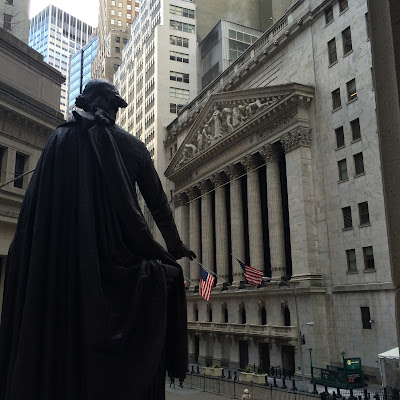