She never stops surprising me. 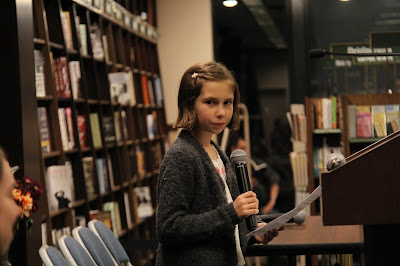 If you know Ella personally, then you know that she is a soft-spoken, what most would consider shy kid.  She is definitely an introvert - she'd much prefer to spend an hour in her room by herself reading or playing with her dolls than an hour at a birthday party (except for the cake part).  So when she asks to take part in things like presenting at the history fair or reading her own short story on a stage in front of dozens of strangers, I just don't know what to make of her. 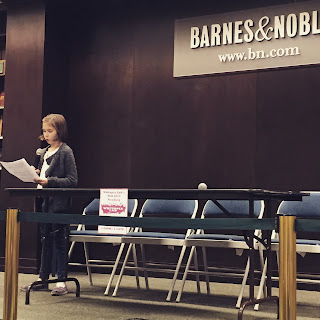 She and Holden have been taking creative writing classes at a great non-profit space called Writopia, where they are mentored by real published authors.  You may remember that a few months back we went to watch their friend Charles read his story at a local independent bookstore.  Ella said she'd like to read hers the next time Writopia had public readings.  When I saw that this time it wasn't going to be at a small bookstore but at the Barnes and Noble on the Upper West Side, the same stage that major international writers have read from, I thought she might change her mind. 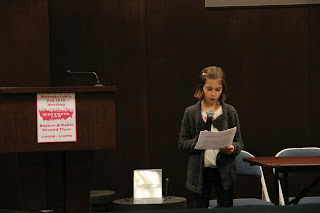 Not only did she not change her mind, she didn't seem nervous at all.  Not even when we walked in a few minutes late and saw no one that looked like a child.  It seems that I accidentally signed her up for the teen reading night.  But she didn't say a word.  They called her name, she marched up to the stage and read her story, proudly.

She's not the only one who was proud.
Posted by Gretchen at 10:20 AM