That Time Salman Rushdie Read to Us

I'm going to leave that title hanging until the end of this post but let me tell you, that was a highlight in my three years in New York City...

Some fun things that happened this week... 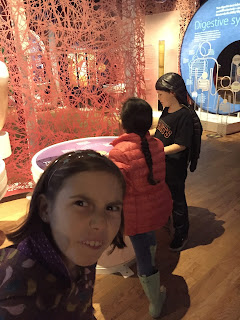 The kids and I spontaneously popped into the Natural History Museum this week to check out their brand new exhibit on bacteria and microbiomes, The Secret World Inside You.  It's a really thorough exhibit that we'll need to return to a few times to really get it all, which is why having memberships to all of these museum is so great - you never feel guilty for just popping in for a 20 minutes here or there.


I also was introduced to a museum that I had never heard of before and am so glad to have discovered.  My friend Julie invited me to join her for a jewelry making workshop (specifically mala beads) at the Rubin Museum of Art.  It's a gorgeous museum in Chelsea that focuses on Hindu and Buddhist art from the Himalayas, India, and neighboring areas.  It was so, so nice to spend an afternoon focused on doing something that I wanted to do that didn't involve the kids and gave me some quality time with a good friend. 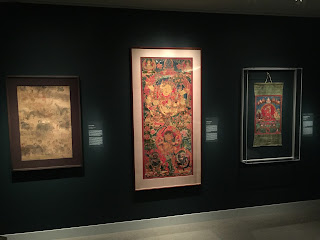 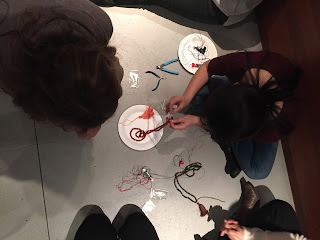 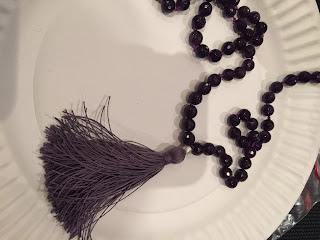 I actually got a lot of time this week to refill my own cup.  I went to see a great documentary all by myself on Friday while the kids were treated to a Cuban music and dance show with some other homeschoolers.  If you get the chance to see Peggy Guggenheim: Art Addict, see it.  It was part of the DOC NYC film festival going on now in the city.  Kevin and I are going again tonight to see a different documentary. 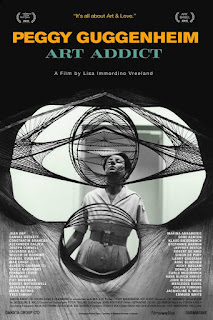 And on Wednesday while the kids were in science camp all day for Veterans Day, my friend Alina took me a Korean spa in the middle-of-nowhere-Queens that was so strange and surreal I couldn't even begin to describe it to you.  There were sleeping rooms filled with dozens of dozing adults at ten in the morning, strange pod-looking saunas, and hot tubs with jets so strong one almost knocked Alina out of the pool.  We had lots of good laughs and again, hours of uninterrupted girl talk.  Just what my empty cup needed.

With such an amazing week you'd be surprised to hear that I haven't even gotten to the highlight yet.  Salman Rushdie has been my very favorite author of all time since I first read Midnight's Children almost twenty years ago.  Since then I've read many more of his novels and even his autobiography about his time under Fatwa from Ayatollah Khomeni for writing The Satanic Verses.  I think his writing is so magical and lyrical.  You can't try to understand it sentence by sentence, but rather you have to give in to it and trust that it will all come together and create a story and picture as you go along.

Well, as part of The Whitney Museum's retrospective on an artist named Frank Stella who among other works did a series based on Moby Dick, as well as the 164th anniversary of the publishing of the novel, the museum had a marathon reading of Herman Melville's novel over two days, inviting many authors to take turns reading aloud from the book.  Salman Rushdie was first up on Saturday morning and we were sitting front and center. 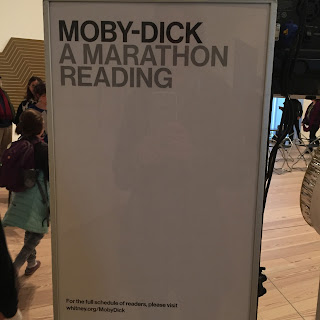 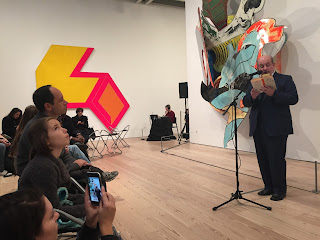 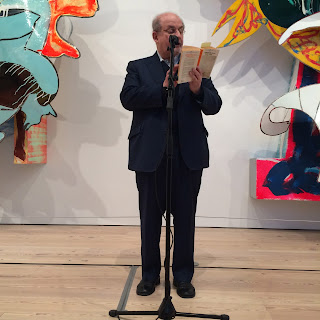 People, my hands were shaking the entire time. 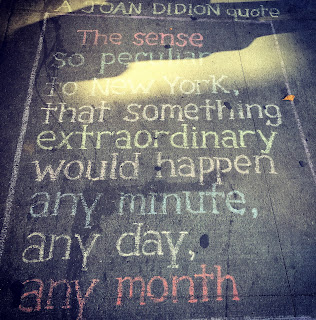