It was a great birthday week.  Thank you for all of the birthday wishes from near and far. 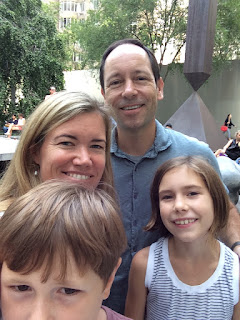 We just made it to the last day of the Members Preview of the new Picasso Sculptures exhibit at the Museum of Modern Art on Sunday.  The exhibit opened to the general public on Monday so Sunday was the last day we could see it without the crowds (which are expected to be big - this exhibit has been hyped around here). 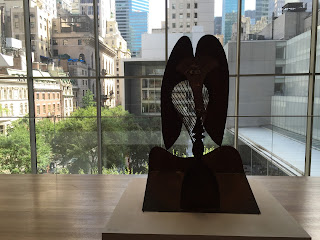 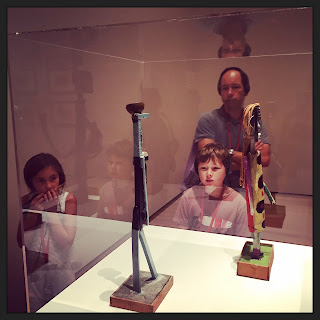 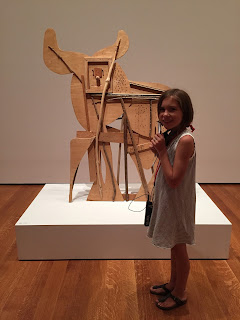 We did the audio tour, as usual, which really helps to keep the kids engaged.  What we all loved about this exhibit is how accessible Picasso makes sculpture to the kids.  We heard lots of, "I could do that with recycled materials at home!" and "Mom, save the cardboard boxes from Amazon, I want to make a cow."  Picasso was never trained in sculpting so his work doesn't follow any rules or conventions of sculpting.  I think the kids liked that.

We had a week filled with lots of friends.  Our apartment was officially "warmed" this weekend with dinner parties on both Friday and Saturday nights with different friends.  We have another planned this coming Saturday as well.  We're finally back to our old California ways, entertaining at home every weekend.  We love it and it's so much more fun for the kids than meeting up with friends at a restaurant.

We also saw a lot of old and met a lot of new homeschool friends this week with their classes in full swing.  Wayfinders (sword fighting/role playing) started in Central Park this week which is by far the highlight of Ella and Holden's week.  Some old friends returned and lots of new friends started.  And I love it because all of the moms hang out on picnic blankets and trade war stories.  There were even birthday donuts for me :) 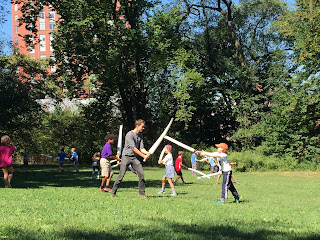 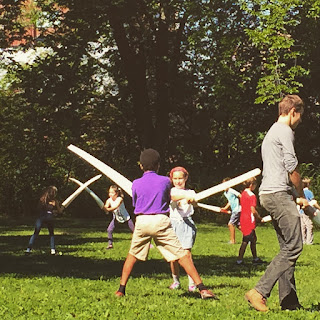 We enjoyed the gorgeous weather in the afternoons at our nearby Morningside Park.  Yes, this is really Harlem. 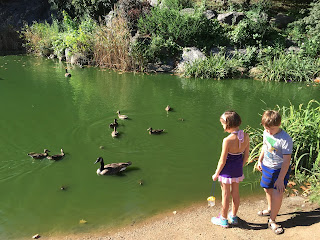 And we joined in a local "Homeschool Recess" that has been going on for years on Wednesdays in the north end of Central Park.  As we walked up to the playground the kids scanned the park and didn't recognize anyone.  They suggested we just go home.  I suggested we try to make new friends.  Two hours later I couldn't drag them away. 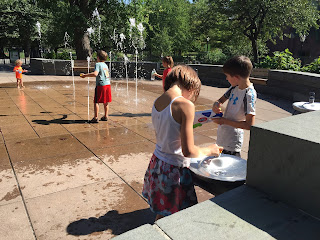 About two dozen homeschoolers in the area meet every Wednesday afternoon here to play.  And there were almost as many moms, dads, tutors - all exchanging information and offering support.  It's quite a change for us from a year ago.

Luckily, Ella had her first fashion design and sewing class that evening, so I was finally able to get them to leave the playground and get on the subway.  When we got off the elevator and saw the perfectly pink space with a giant runway down the middle of it, I thought she might explode with excitement.  Ever since moving to New York she's been very conscious and experimental with her dress.  And she's always loved sewing and creating things from fabric.  So I think she's in her element here. 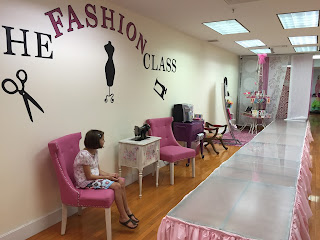 Meanwhile, Holden and I walked around the corner to the Main Public Library which is more like a museum, housed in a gigantic Beaux Arts building with Patience and Fortitude (the two lion statues) keeping watch out front. 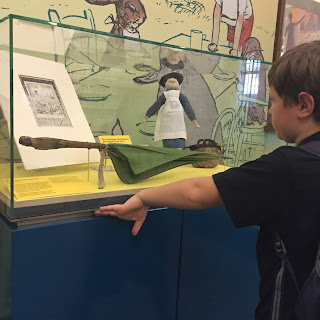 In the Children's section they currently have a small exhibit of items that belonged to the author of Mary Poppins, P. L. Travers, including her actual umbrella which was the inspiration for Mary Poppins' flying one.

The weather was too nice to stay inside for long so we wandered outside to Bryant Park and found the games area - ten or so tables with a a large cart filled with board games - and played a rousing round of Scrabble.  Right in the middle of downtown Manhattan in the middle of a work day. 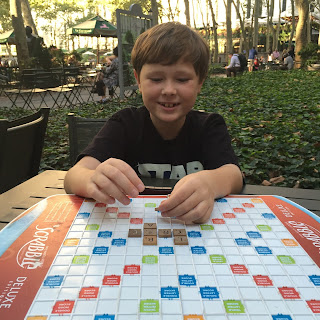 There's nothing you can't do in New York City.
Posted by Gretchen at 9:02 AM