OK, I'm going to try very hard not to do that again.  Skipping my mid-week post seemed like a good idea at the time.  As you can imagine, we've been busy bees, people. 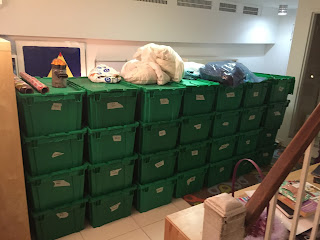 These boxes don't pack themselves.  But because a week in New York City is equivalent to a month anywhere else, I've got too much to tell you all about.

First let me take you all the way back to last weekend.  Before even packing a single box we decided to have some fun.  We spent Saturday up in the Hudson River Valley checking out very old mansions formerly belonging to very wealthy people. 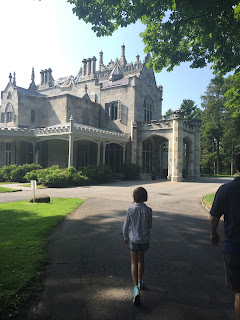 First we stopped at the author Washington Irving's home called Sunnyside.  The famed author of The Legend of Sleepy Hollow and Rip Van Winkle lived and wrote here in the mid-19th century.  We had a terrific docent who really brought the home and surrounding land alive for us. 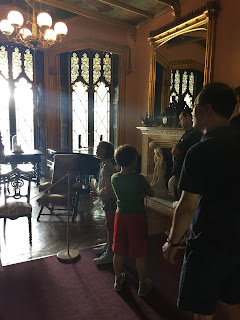 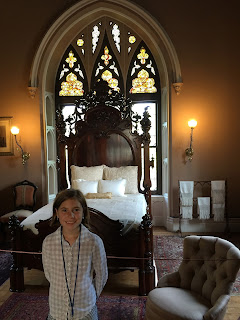 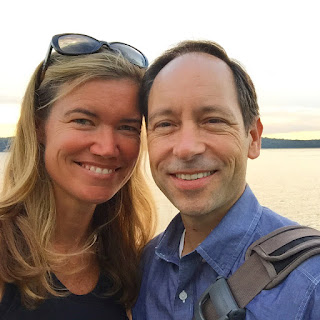 And after that we visited Lyndhurst, a Gothic Revival mansion of the same era but on a much grander scale.  Lyndhurst was owned by, among others, railroad magnate Jay Gould.  The kids loved both tours and their settings along the Hudson River is gorgeous.

Our weekdays consisted of the kids doing schoolwork for a few hours each morning (including Spanish lessons with their tutor) while I packed.  I've got this packing thing down now.  I could do it in my sleep. (Actually, I wish I could.  That would save me so much time.)  By afternoons though I was both feeling guilty keeping the kids cooped up indoors on beautiful summer days, and also desperately wanting to get out and about myself.  So our afternoons were filled with play dates and park visits, swimming and ice cream. 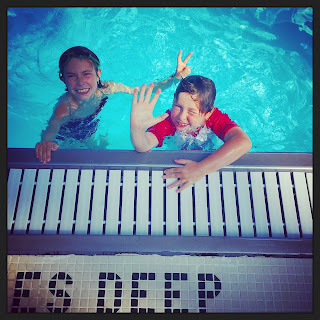 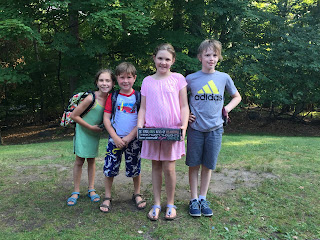 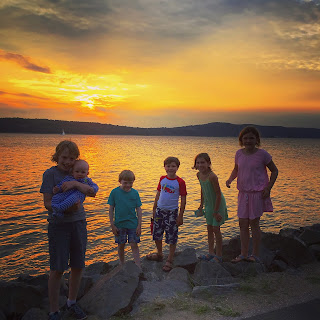 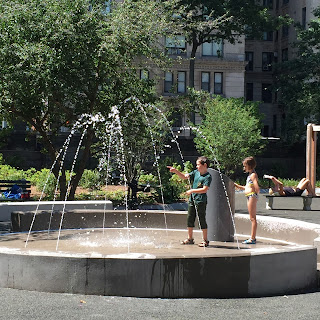 Our evenings were pretty packed as well.  On Monday night there was a band playing in Central Park.  We were too cheap to spring for the $40 tickets so we met Kevin for a picnic dinner just outside the concert venue and enjoyed a free concert. 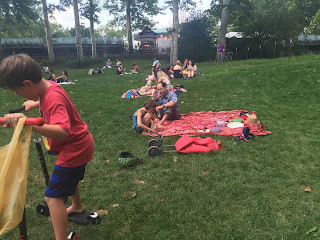 On Wednesday night our friend Nate was in town from San Francisco so we took him to our current favorite bar on a boat on the river, The Frying Pan.  It couldn't have been a nicer summer night to be sitting on the Hudson River at sunset, watching the boats go by. 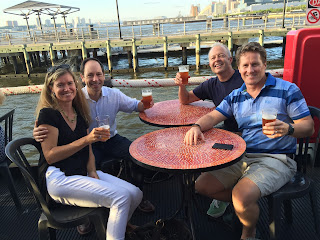 Thursday night was the big launch party for the third and final book in a series that Ella loves - The School for Good and Evil.  It was held at an incredible kids' bookstore, Books of Wonder.  She especially loved as the author autographed her book, he told her that there's a new character in this book named none other than Ella. 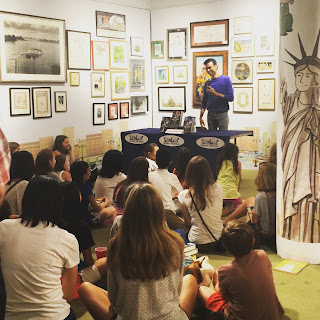 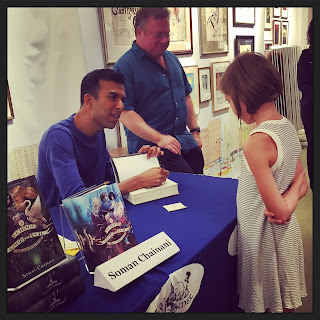 When Kevin was home alone while the rest of us were still in California, he spent a Friday evening listening to a jazz trio in Central Park.  So we decided to see if that same trio was playing again this Friday night.  And indeed, they were. 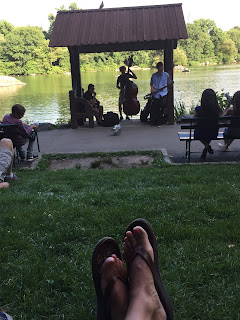 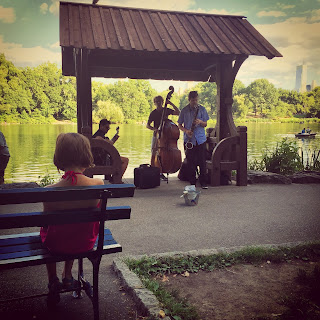 Not a bad way to wrap up a busy and productive week.

By Saturday morning we had run out of boxes and couldn't get more delivered until Monday morning.  We were left with no excuse not to get out and enjoy the beautiful weather.  We did as we love to do - got on the subway and randomly decided to get off and explore a new neighborhood.  The Lower East Side and Chinatown isn't exactly new for us, but there's always more to explore.

We found ourselves at the Tenement Museum.  I know it doesn't sound like much, but let me tell you, be sure to add it to your to do list for your next visit to NYC.  It was really amazing.  Our group of about ten people were given a quick history lesson on immigration into the city in the early 1900s.  We were asked to pretend to be a family that has just arrived from Southern Italy after a 20 day trip across the Atlantic Ocean on a steamer.  We are very poor, don't speak English, and are frightened.  We are taken into a tenement apartment to meet Victoria (who really lived in that building), a 14-year-old girl from Greece who has been in this country for three years (played by a costumed actress).  Our family can ask her any questions we have for her as new immigrants.  It was such a great way to learn about the immigrant experience, see how they lived and probably how many still live today.  The kids loved it.  Unfortunately, I wasn't allowed to take pictures inside and you know how much that killed me! 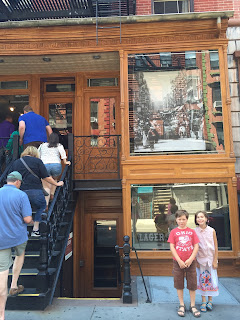 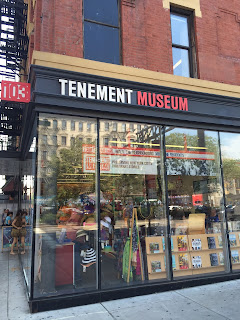 From there we continued with our day of exploration by walking through Chinatown, Little Italy, SoHo, and over to the West Village.  We stumbled upon Elizabeth Street Garden, an adorable little sculpture garden in NoLiTa (North of Little Italy).  We pulled out our books and read for a while.  Then in the West Village we found a restaurant table available on the sidewalk and we made ourselves at home for a couple hours of excellent people watching. 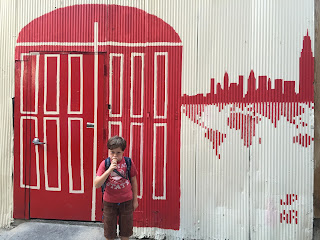 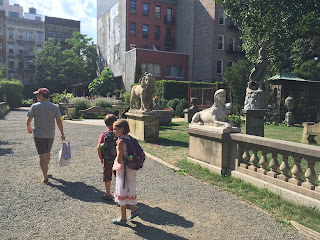 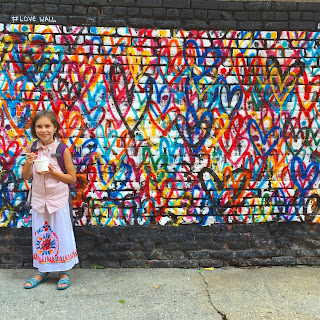 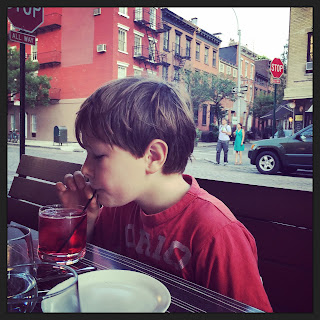 A full week but we wouldn't have it any other way.