Meeting an Astronaut and Shopping in Sugar Hill

We are in the home stretch of our first year of homeschooling, people!  Holden finished his 3rd grade math curriculum a few weeks ago and is well into his 4th grade math work (even though he just finished 2nd grade).  He wrapped up all of the rest of his 2nd grade core curriculum last Friday.  He'll spend the next week or so working on science and history with Ella, and I have him on a summer program to work on his typing skills, handwriting, and cursive.  Ella and I are working hard to get her through all of her 4th grade material before her friend Francesca arrives a week from Thursday.  I think we can do it.  All while continuing their Spanish and other extracurricular classes.

You're lucky you're getting a blog post at all!

Last week we snuck in a field trip with other homeschoolers to see a performance of Japanese drumming, which it should not surprise you, Holden loved.  We enjoyed a nice lunch afterward on the riverside in the shadow of the George Washington Bridge. 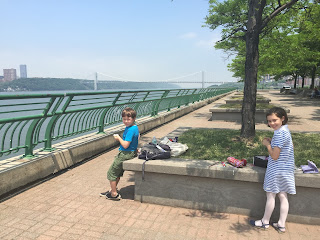 We also got to see our homeschool buddy Charles, read an original piece at our favorite bookstore, Book Culture.  They host readings from Writopia, where the kids have been taking creative writing classes.  They've been asked to read publicly before but were hesitant.  I thought having them watch Charles (who is even more shy than they are) would give them confidence - and it worked like a charm.  They'll both read in the fall. 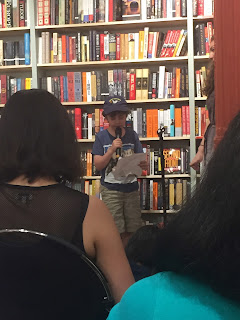 Friday was their final mythology class of the year at the Met.  And Kevin and I celebrated with a rooftop glass of wine.

Saturday was sports day and Ella even braved the heat and humidity with her first double header.  I am very proud to say that the Peaches won both of their games, even though the second game was against middle-schoolers! 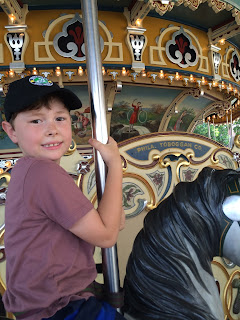 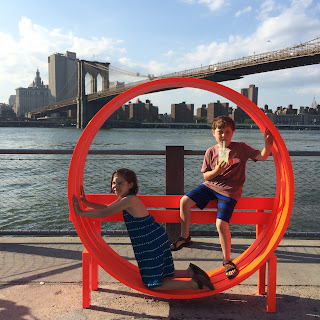 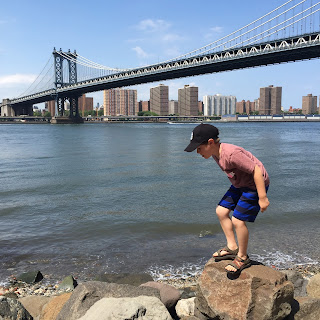 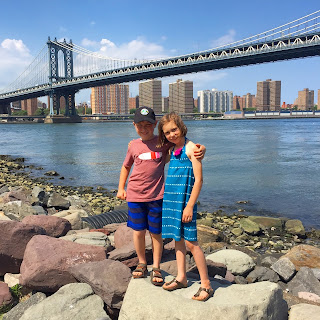 After all the games, the four of us met up on the other side of the East River in Brooklyn.  It was a beautiful day for the riverside park and after an obligatory ride on the carousel we stumbled upon the World Science Festival.  How lucky was that? 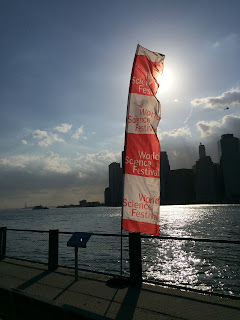 We even got to meet a real, live astronaut (and she is a girl!).  Nicole Stott spent three months on the International Space Station and even spent 18 days in an underwater facility that NASA has off the Florida coast, called what else?  Atlantis.  I'm not sure which one of us was the most star-struck talking to her. 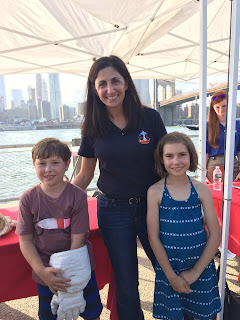 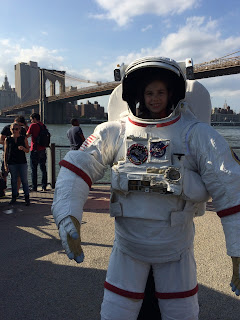 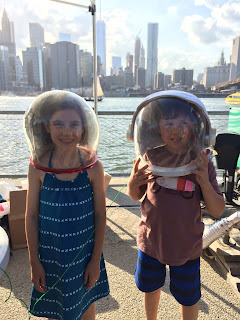 From there we enjoyed a free hour of music back on the floating barge as part of Bargemusic.  You may remember that we did this about a year and a half ago in the middle of winter.  There were very few people there that time, just us and several homeless guys coming in from the cold.  This time the barge was packed (probably holds just under 100 seats) and the music was mesmerizing.  A violinist, cellist, and pianist played Beethoven's Opus One, Shubert, and some French guy. 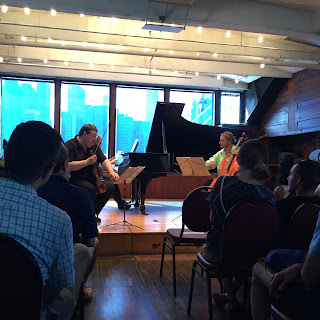 Sunday morning we woke up and scuttled across the park back to the Met.  The kids were helping their friend Francesca back in California, with a school project.  Francesca had read From The Mixed Up Files of Mrs. Basil E. Frankenweiler, the story of the sister and brother who run away from their Connecticut home and hide out in the Metropolitan Museum of Art.  Instead of writing a book report, Francesca decided to act as a reporter and film an interview with Claudia and Jamie, the characters in the book, and ask them all about their adventures.  Ella (Claudia) and Holden (Jamie) happily obliged.  Francesca's dad recorded the FaceTime interview and will help Francesca cut it into a film for school. 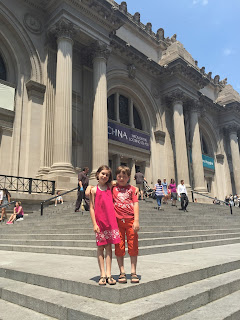 From there we headed uptown to Harlem.  I wanted to check out a fun weekly market held in someone's Brownstone, Sugar Hill Market.  It features a variety of goods all made in Harlem: soaps, chocolates, clothes, ceramics, even coffee roasted right here.  So fun to peek inside someone's home. 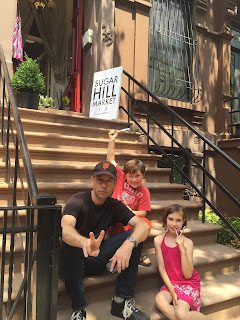 We wandered all around Harlem and had planned to have a late lunch in an open air market in Spanish Harlem with lots of amazing Latin food stalls, but the hot, humid skies opened up and dumped rain on us.  So we ducked into the closest restaurant with a covered patio and enjoyed Sangria and a very late brunch.  You don't have to go far in Harlem for good food. 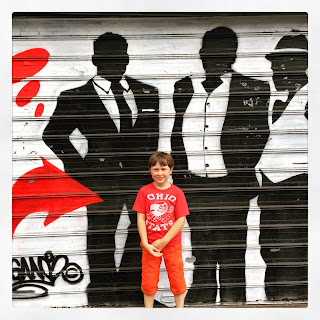