Getting Our Culture On

After a month or so of feeling gloomy and being in bad moods, we got one of those Only In New York weekends and all is well again in our world. 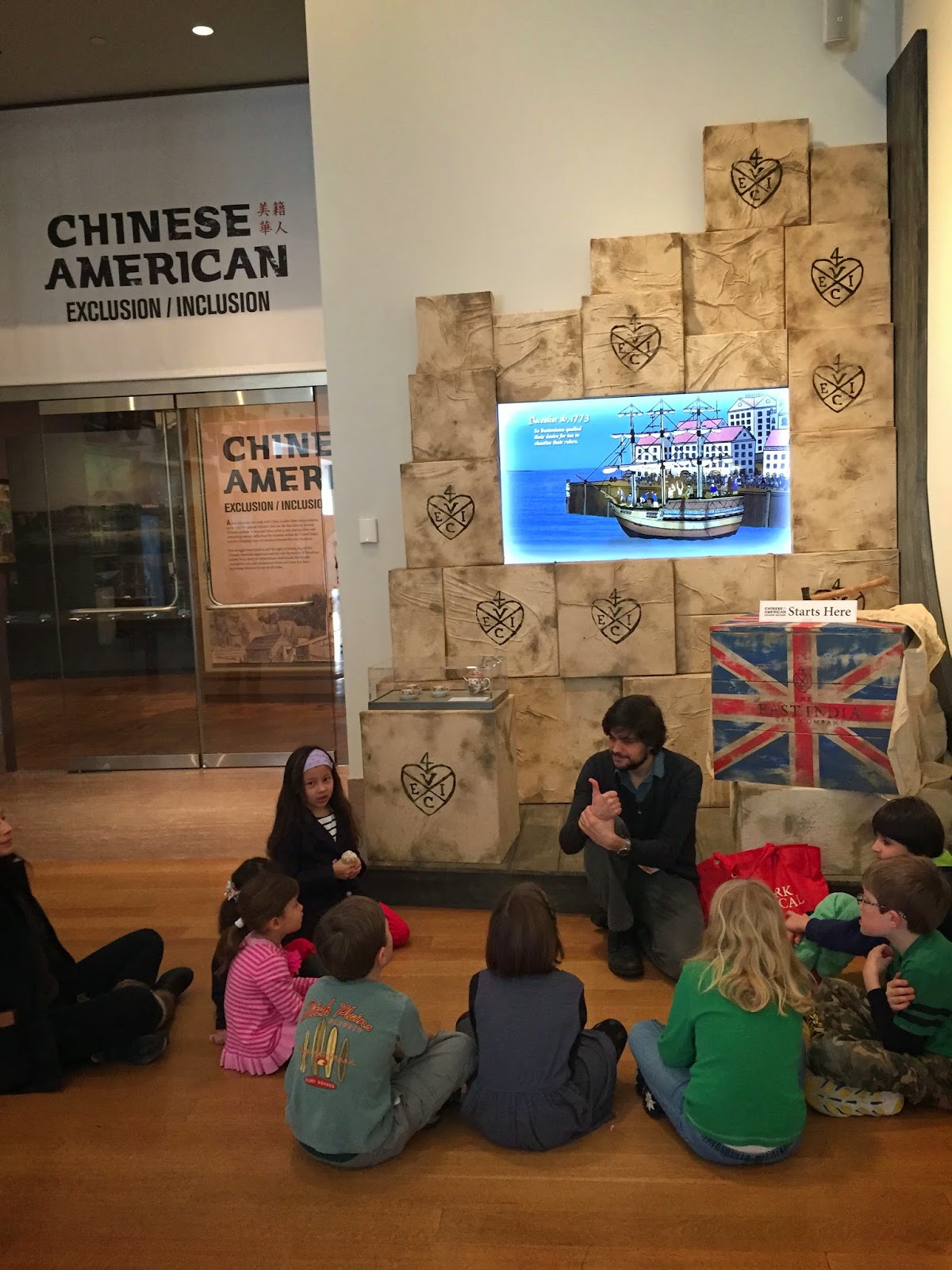 On Friday, before their class at the New York Historical Society, the kids and I got to join a group of homeschoolers taking a docent-led tour of the Chinese-American exhibit at the museum.  It documents the plight of the Chinese as new immigrants to the United States in the early 1800s.  A Chinese-American mom wanted to have a guided tour for her daughters and took the initiative to ask the museum if they'd be willing to lead a tour for a group of homeschoolers.  It was a really great exhibit (and pretty disturbing, considering how terribly the Chinese were treated) and as usual we got a whole lot more out of it than if we had just walked through the exhibit on our own. 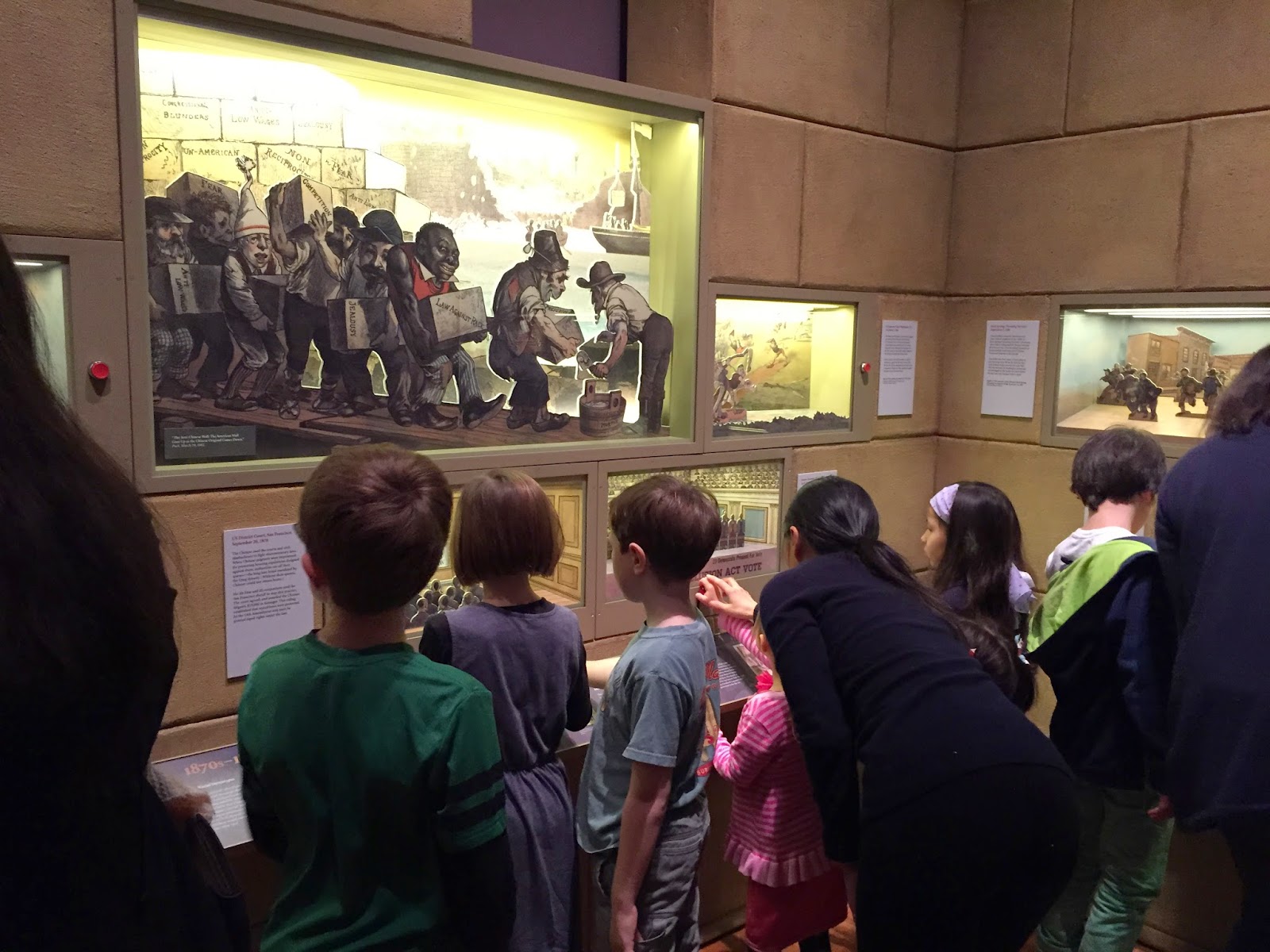 While the kids were in their history class after the tour, I got to have a really nice lunch with another homeschool mom.  I feel like in just a few short months the kids and I have really built up our homeschool community, which of course was one of my big concerns starting out on this adventure. 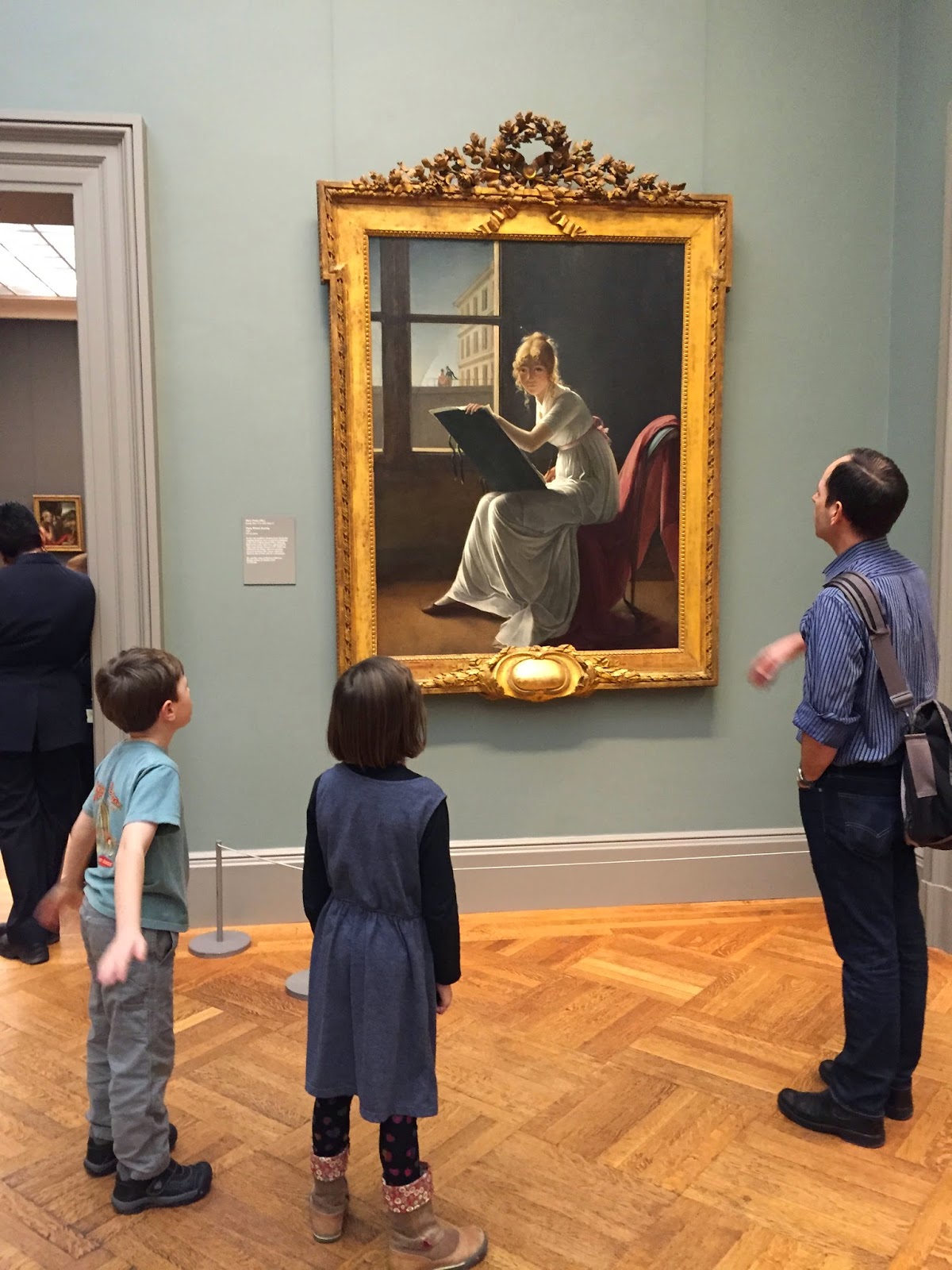 In the evening, the kids' World Mythology class at The Met started back up again for the semester.  Friday nights are our family's favorite time of the week.  We're all in our happy place.  The kids really love their class and the teacher and have made some friends.  They both luckily love mythology and who wouldn't love getting to spend an hour and a half hearing stories and seeing artifacts or art related to that story and then getting to sketch it?  This week they learned about Dionysus and Hephaistos.

Meanwhile, all adult members of the museum were given a coupon for a free glass of Champagne at check-in that night, so Kevin and I happily made our way to the Balcony Lounge.  I don't think we were supposed to be in there - the Balcony Lounge is a private bar area for members who give a lot more money than we do (not to be confused with the Balcony Bar, where you can often find us on Friday nights).  But we weren't sure where else we were supposed to get our free Champagne, so somehow we were allowed to join the aristocracy.  Knowing that we likely would never be able to return to the Balcony Lounge, we decided to spend the entire hour and a half there, eating snacks and drinking Champagne and martinis. 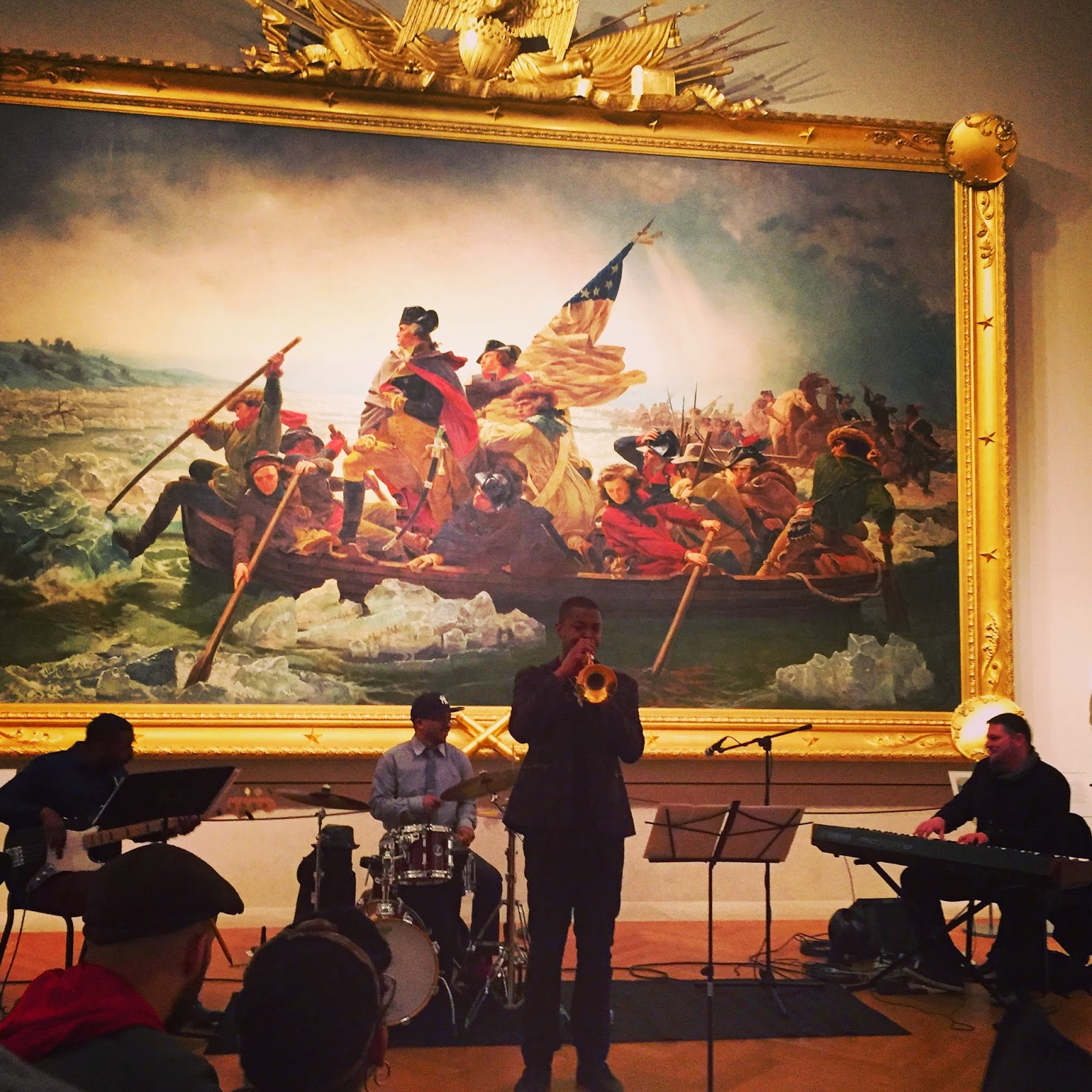 Friday night was Jazz Night at the museum, so once we picked up the kids we took them around the museum to see some of the 15 different ensembles that were playing.  The musicians were all incredible and frankly, we couldn't believe that we were standing in front of world-famous works of art, listening to world-class musicians, drinking free Champagne.  How did we get so lucky?

On Saturday we saw a play down in the Theater District.  There's a theater called The New Victory that specializes in high-quality theater for kids and families.   The kids and I have been there a couple times before on field trips with their school last year but this was Kevin's first time.  We saw a fantastic play called Lionboy performed by a British theater collective.  It is based on the trilogy of children's novels of the same name - a dystopian future where a corporation called the Corporacy is more powerful than governments and sells pharmaceuticals but actually creates cats that will cause everyone to be asthmatic (job security).  The main character travels from England to France in a rowboat across the English Channel in search of his parents who've been kidnapped, is kidnapped himself by a circus boat, can talk to lions and eventually helps the circus lions return to Morocco...it was insane and fantastic and we all really loved it. 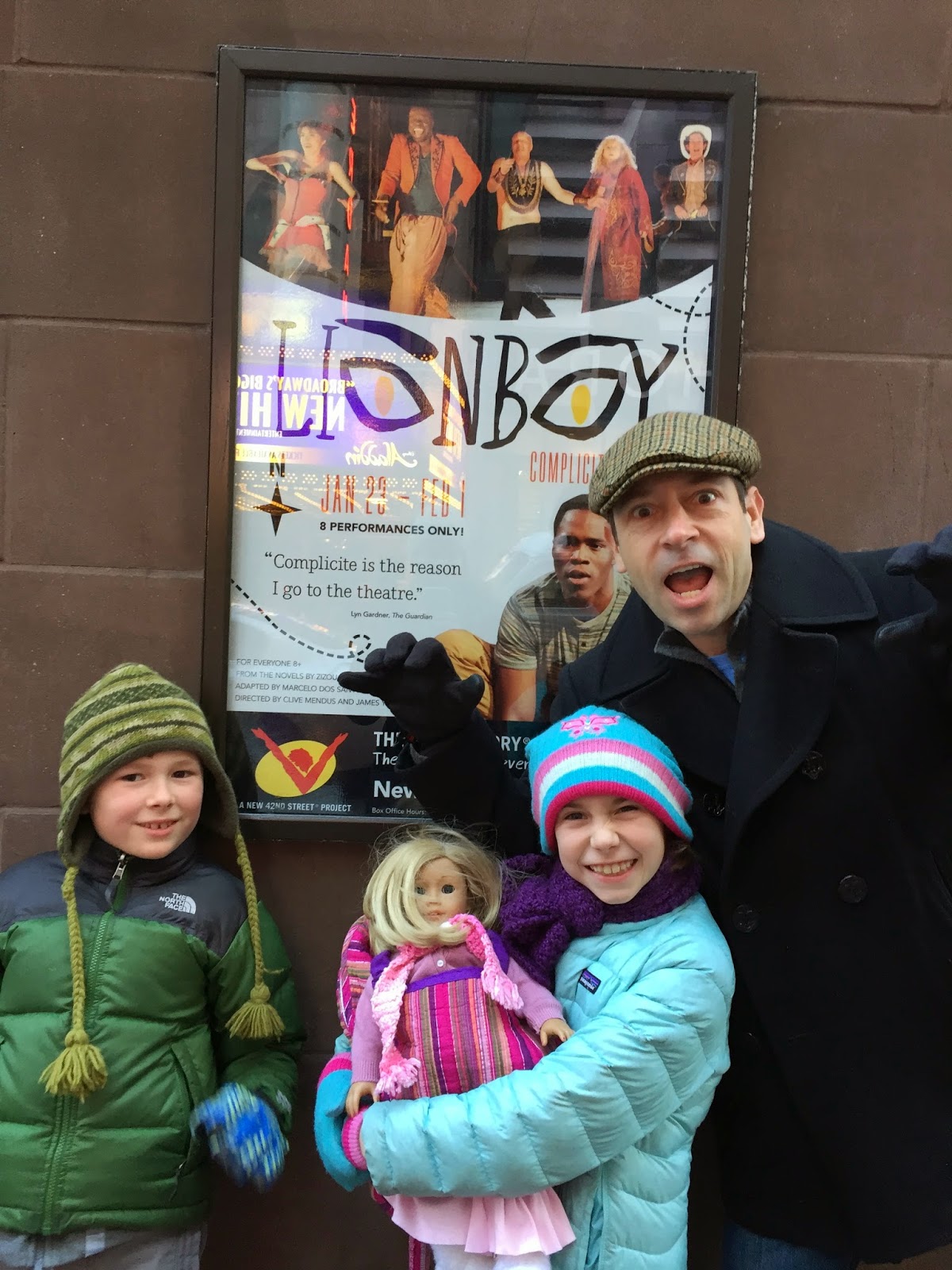 Sunday didn't let us down, either.  We headed down through Brooklyn and back up to Queens for our first real visit to that borough.  I've been wanting to see the Noguchi Museum for a long time but it's such a haul for us to get all the way there (an hour by subway even though as the crow flies it's probably just 3 miles or so).  I got an email from them this week saying that they were having a children's open house on Sunday so I thought it was time to visit.  We loved it but I will say that we'll have to come back in late spring or summer because a lot of the museum is an outdoor garden which was all covered in snow.  In case you don't know, Isamu Noguchi was a Japanese-American artist in the 1900s who lived in both Japan and New York (and traveled extensively).  He was primarily a sculptor but was also known for his furniture and lighting designs.  The kids enjoyed making some mini-sculptures before we walked throughout the museum. 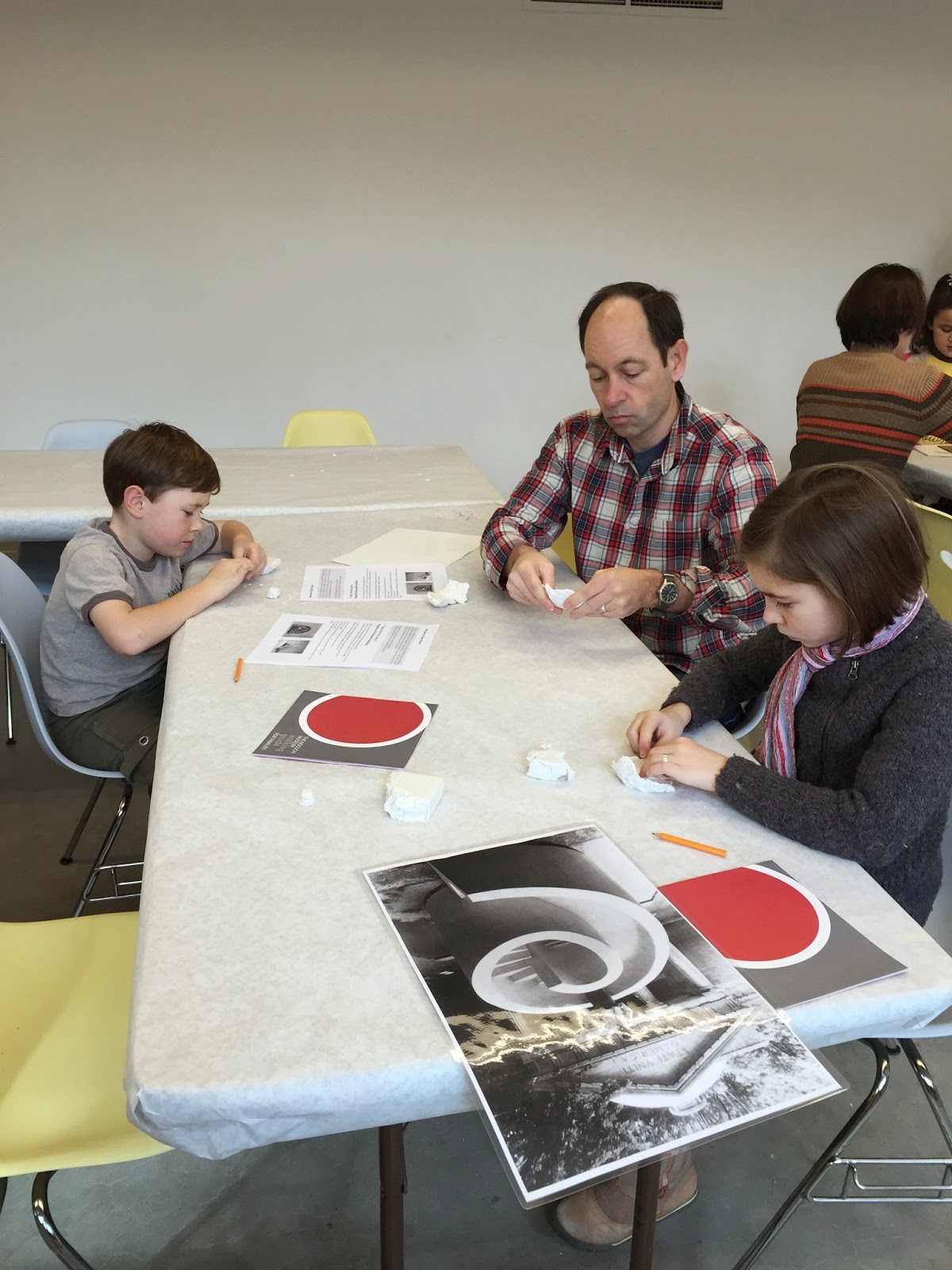 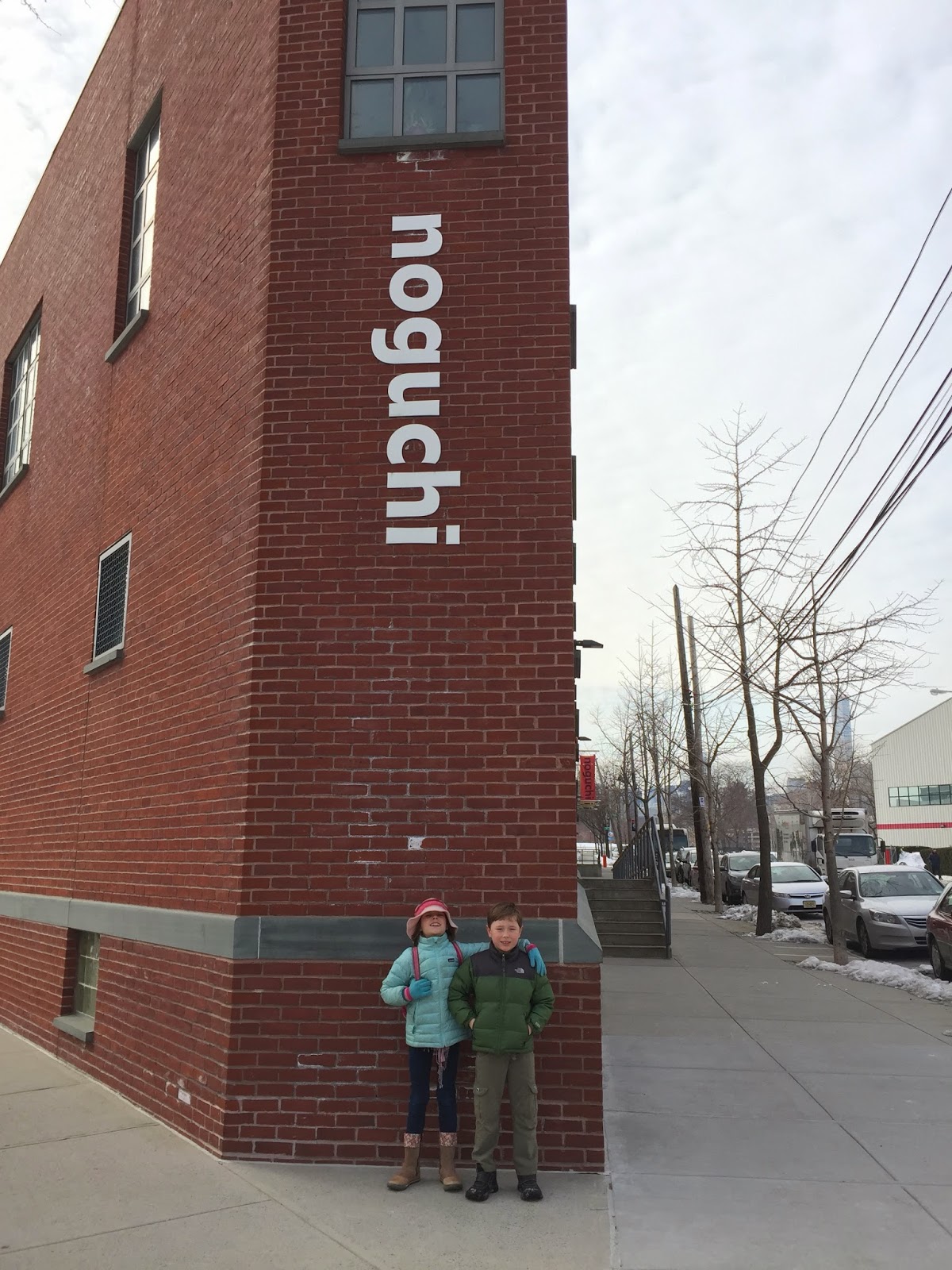 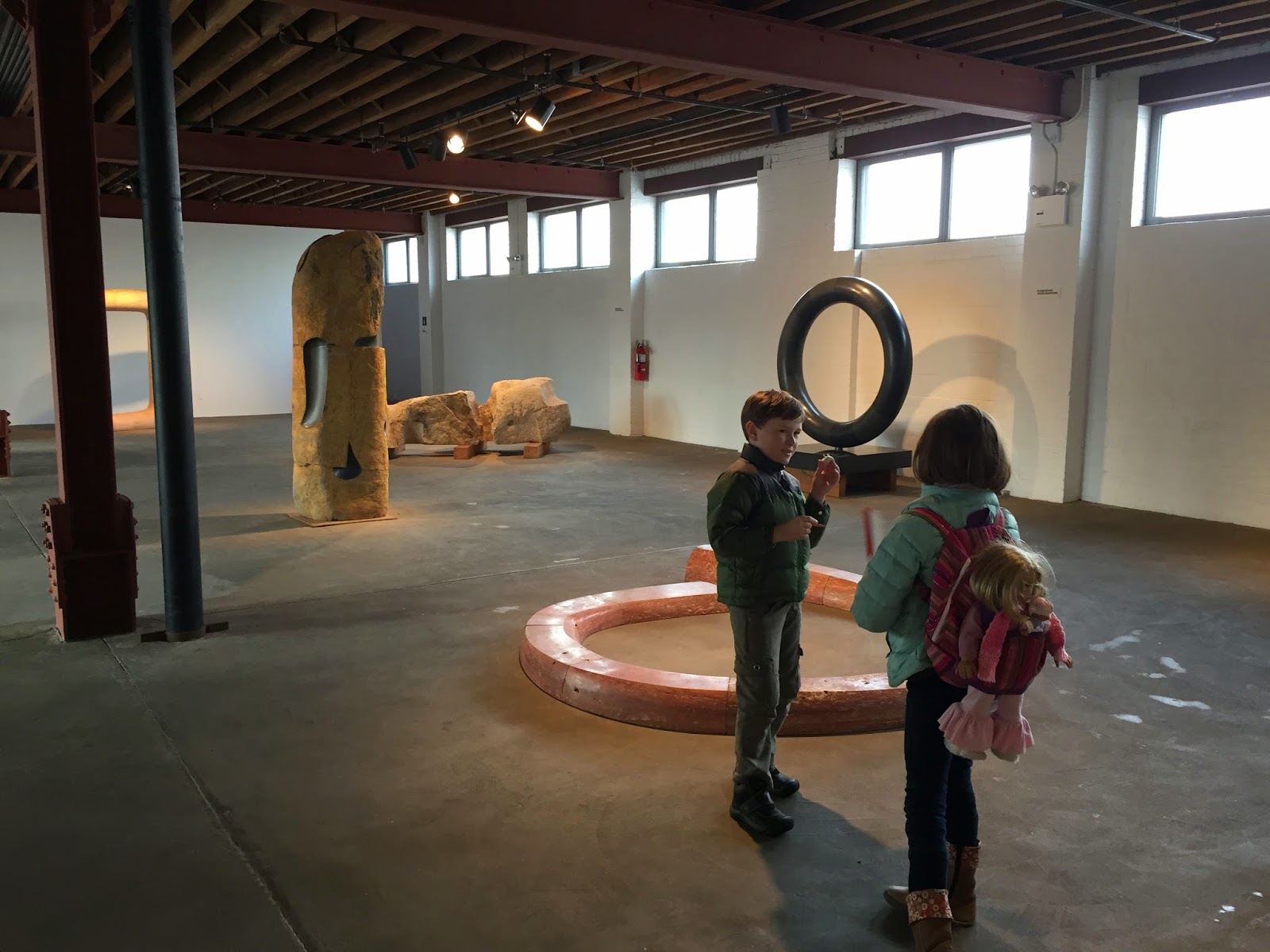 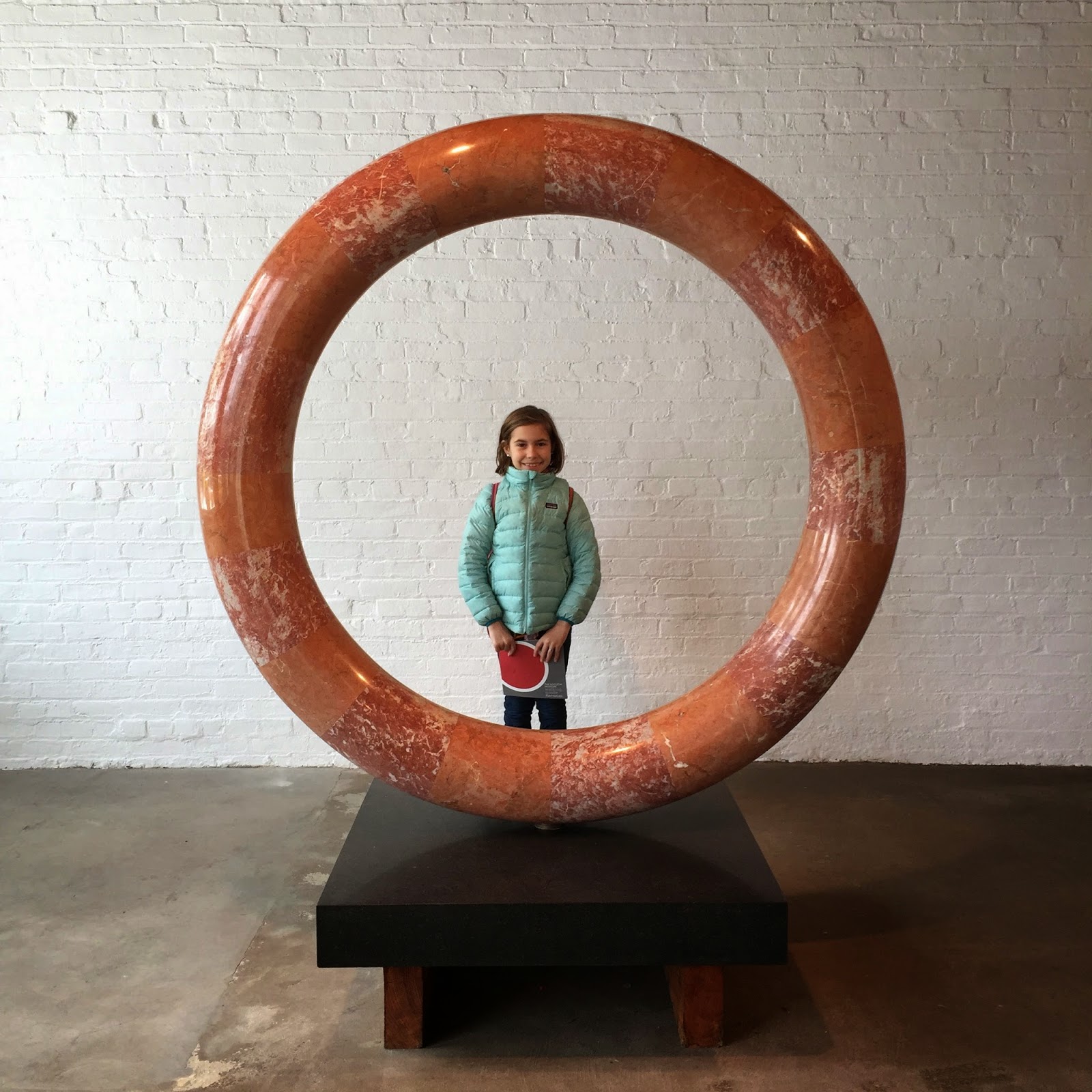 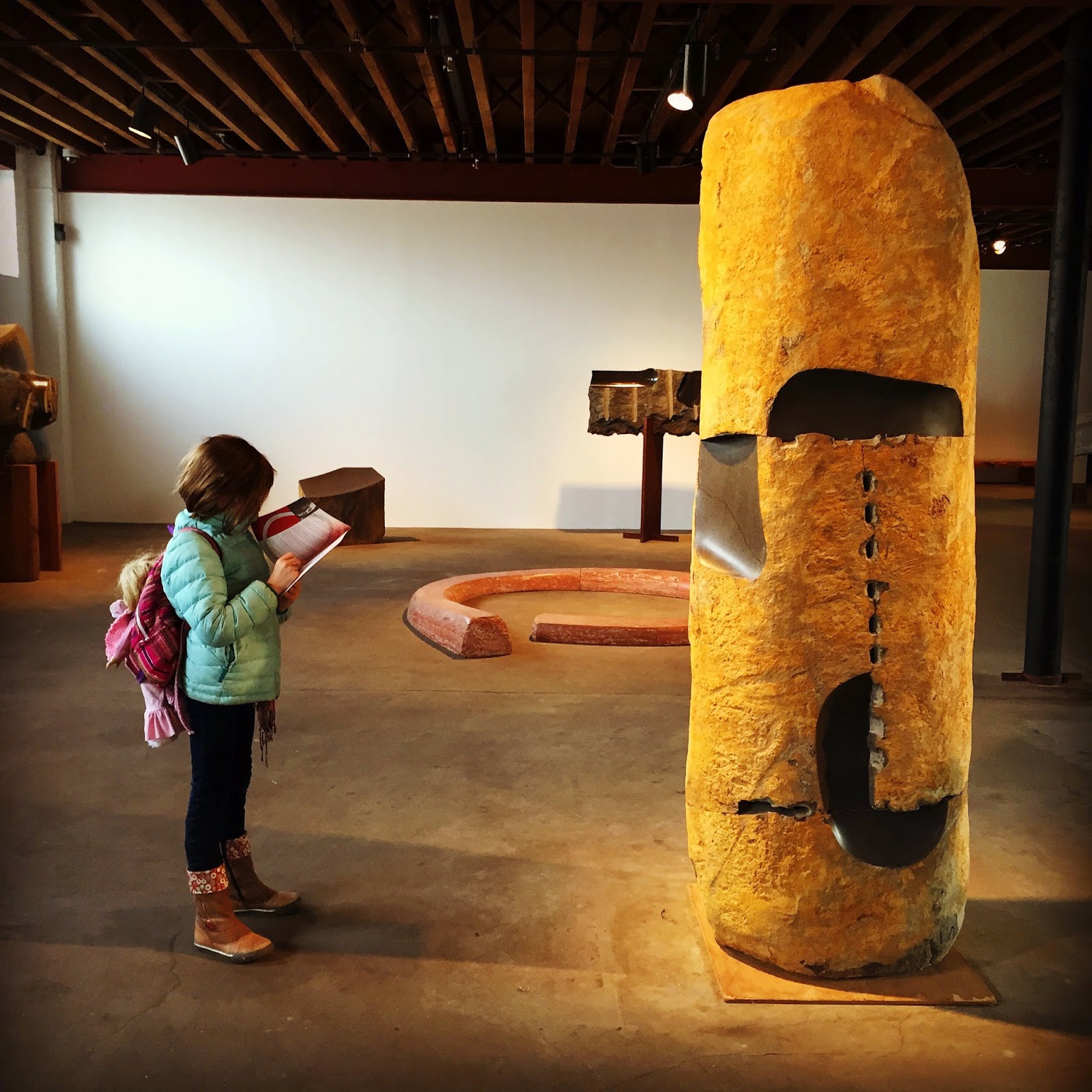 On our walk back to the subway we stumbled upon a sculpture garden along the East River, Socrates Sculpture Park.  Again, we'll have to return when the weather heats up as many of the sculptures were concealed by snow.  But we still had a great time climbing around the ones we were able to see. 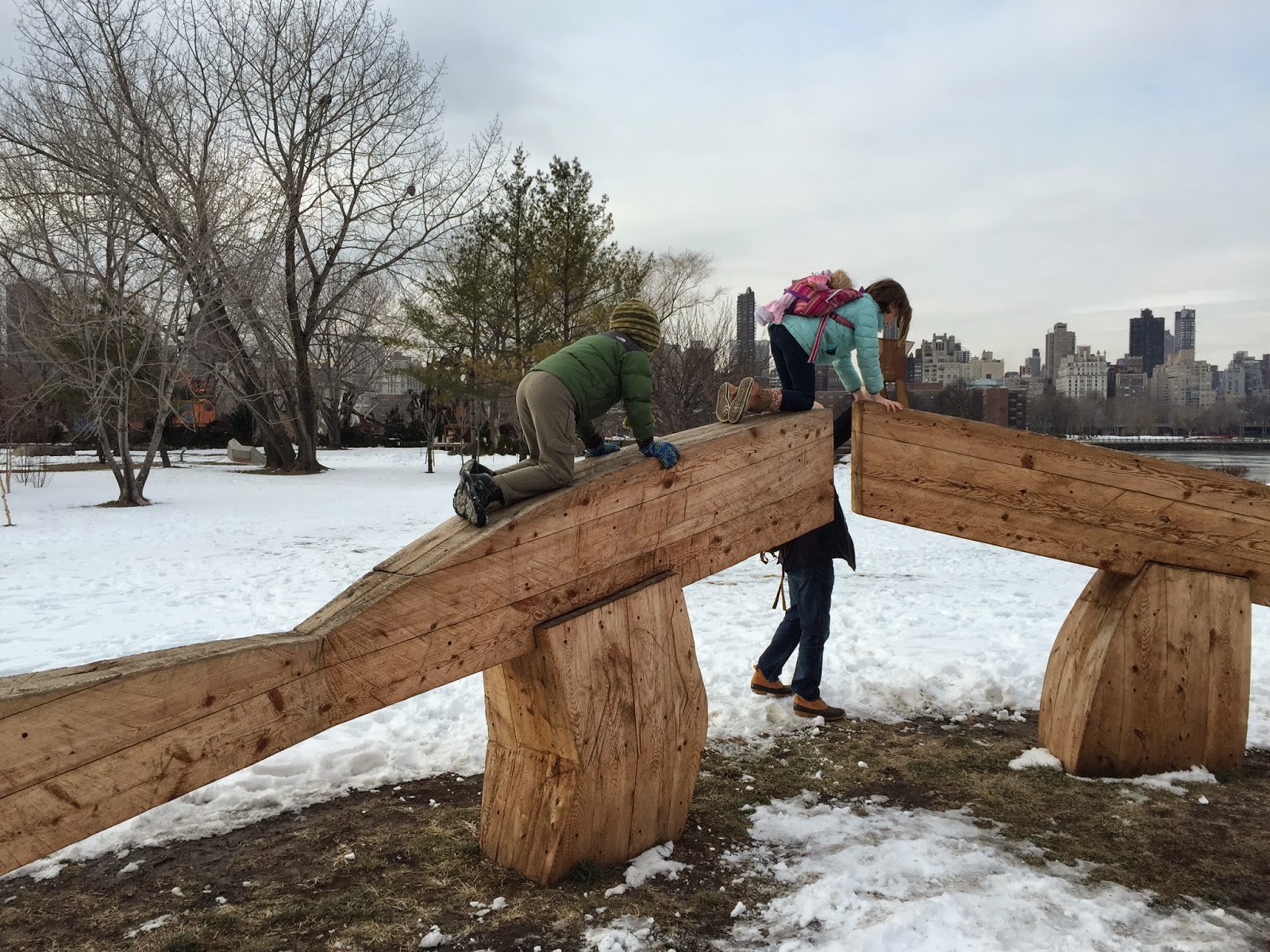 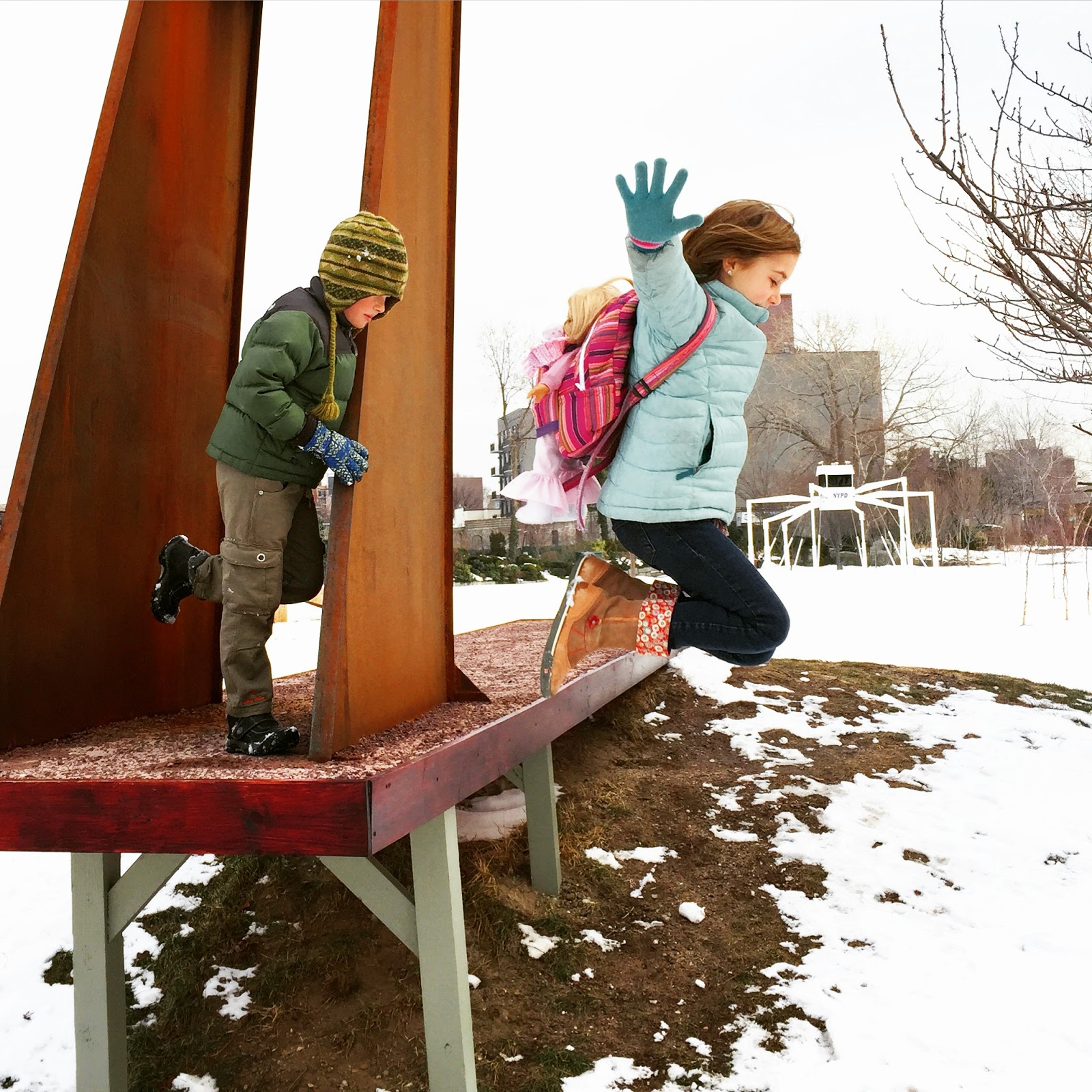 Kevin headed over to a buddy's house on Sunday night to watch the Superbowl while the kids and I joined some friends and went to see a movie and watched the halftime show in an Irish pub (Ella's new favorite genre of food).

And that was just three days.  The snow may be falling but the clouds have lifted.
Posted by Gretchen at 2:27 PM