I need a substitute.

We had our first sick day.  Mom/teacher was sick on Friday (hence no blog post) and it was an interesting day.  Thank god the kids love to read.  They read for hours on Friday and were so good sitting for two hours in my doctor's waiting room, happily reading.  The doctor and receptionist both commented on how well behaved and patient they were, which of course made me laugh.

But there's no time to be sick in New York City.  So the week was still filled with field trips and adventures.

On Wednesday we didn't have any classes or trips planned so I thought it would be nice to find somewhere new to do our schoolwork.  We packed up our books and walked down to the Natural History Museum and found their library, which in and of itself was an adventure.  It's not well marked and it turned out it is through a door off one of the dinosaur rooms that we've been in a thousand times.  We've never seen the door before and now it was a like a secret passageway.  We got through the door and down the dark, hidden hallway only to find a locked door and a sign saying that only museum employees were allowed in before 2pm.  The librarian must have seen our sad faces through the glass doors because she came over and unlocked them.  I told her we were looking for a quiet place to study and she happily let us in. 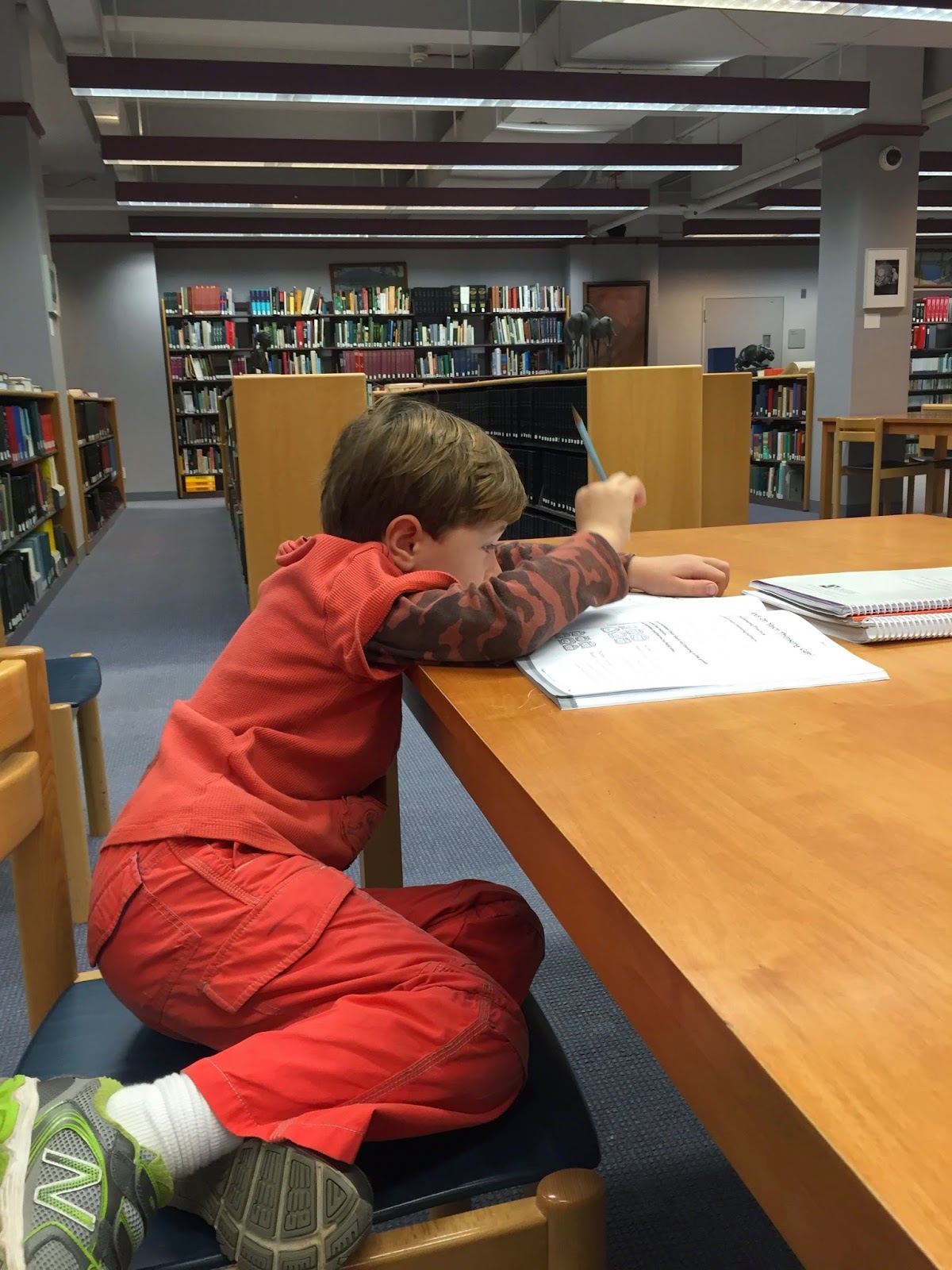 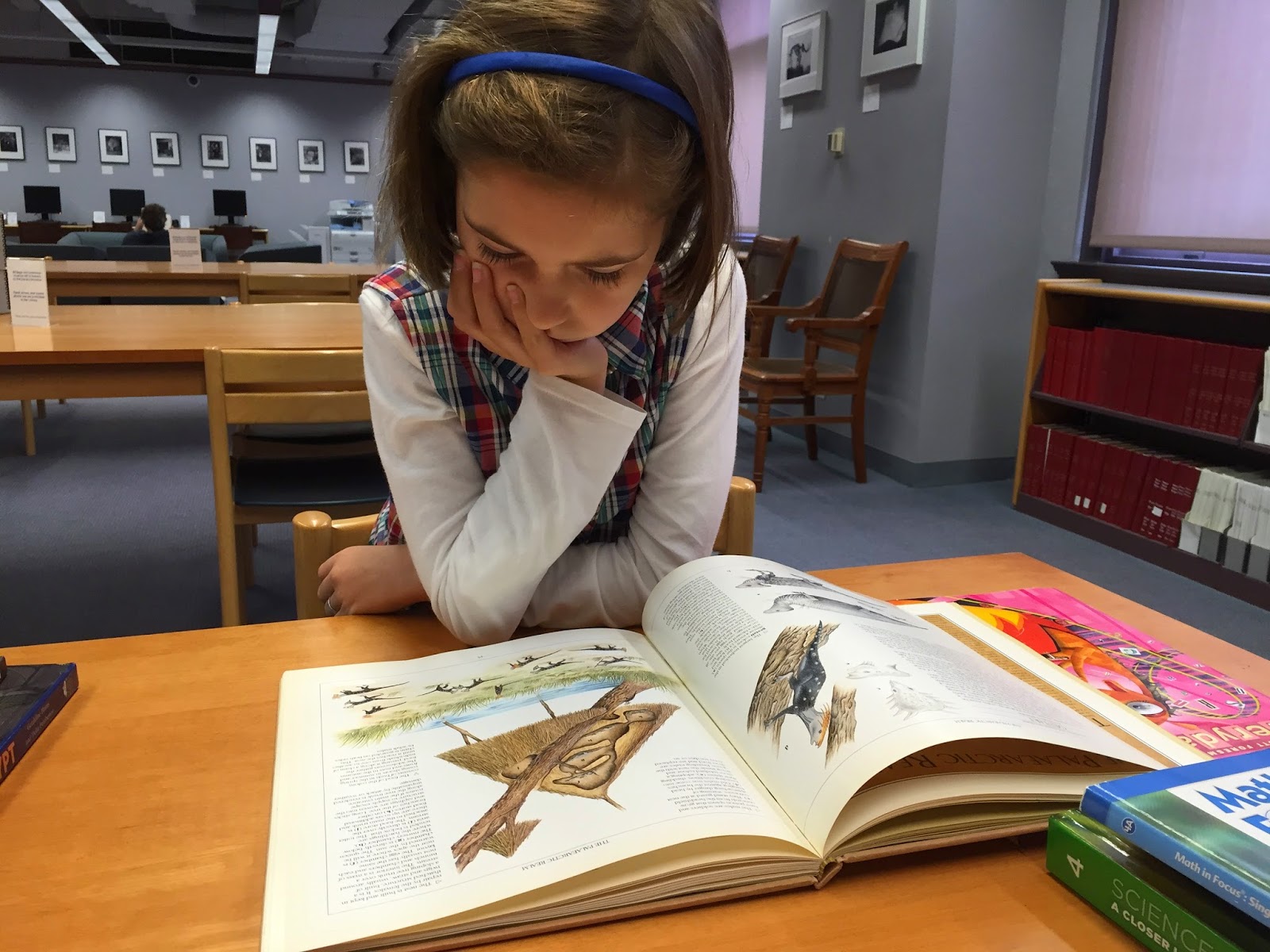 For most of the three hours it was just us and a few scientists.  One elderly man finally walked over to our table to see why we were in the library in the middle of a school day.  He spied the history and math books spread out on our table and gave a disapproving snort.  He told the kids to follow him.  We did as we were told and without a word he led us to the children's science book corner and suggested we might find more interesting reading there and walked away.  We did indeed and after that not much more math and history were accomplished.

Thursday was a cold fall day but it didn't stop us from going on our outdoor field trip.  Wildman Steve is a naturalist who for 30 years has led walks throughout parks in and around New York City to teach kids and adults about the environment and getting back into nature.  He took our group of homeschoolers on a foraging tour around Central Park, teaching us how to find edible plants (and more importantly, teaching which were poisonous).  He was so knowledgeable and funny and Holden said it was the best field trip he's taken in his entire life.  Holden was right up at the front of the 30 or so people in our group, raising his hand, asking questions, and pointing out new plants and fungi to Steve.  And the park was just so beautiful with all of its fall foliage. 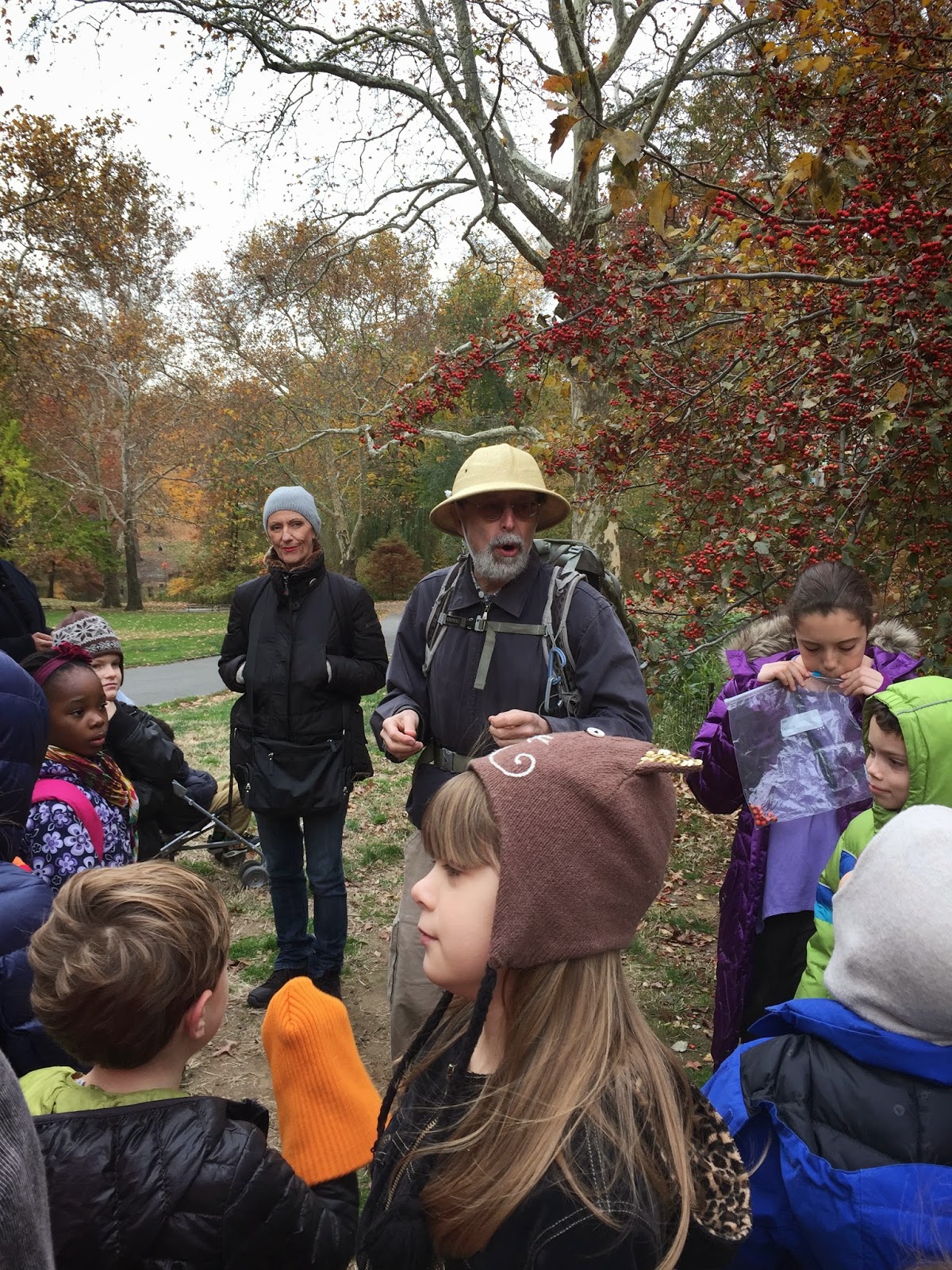 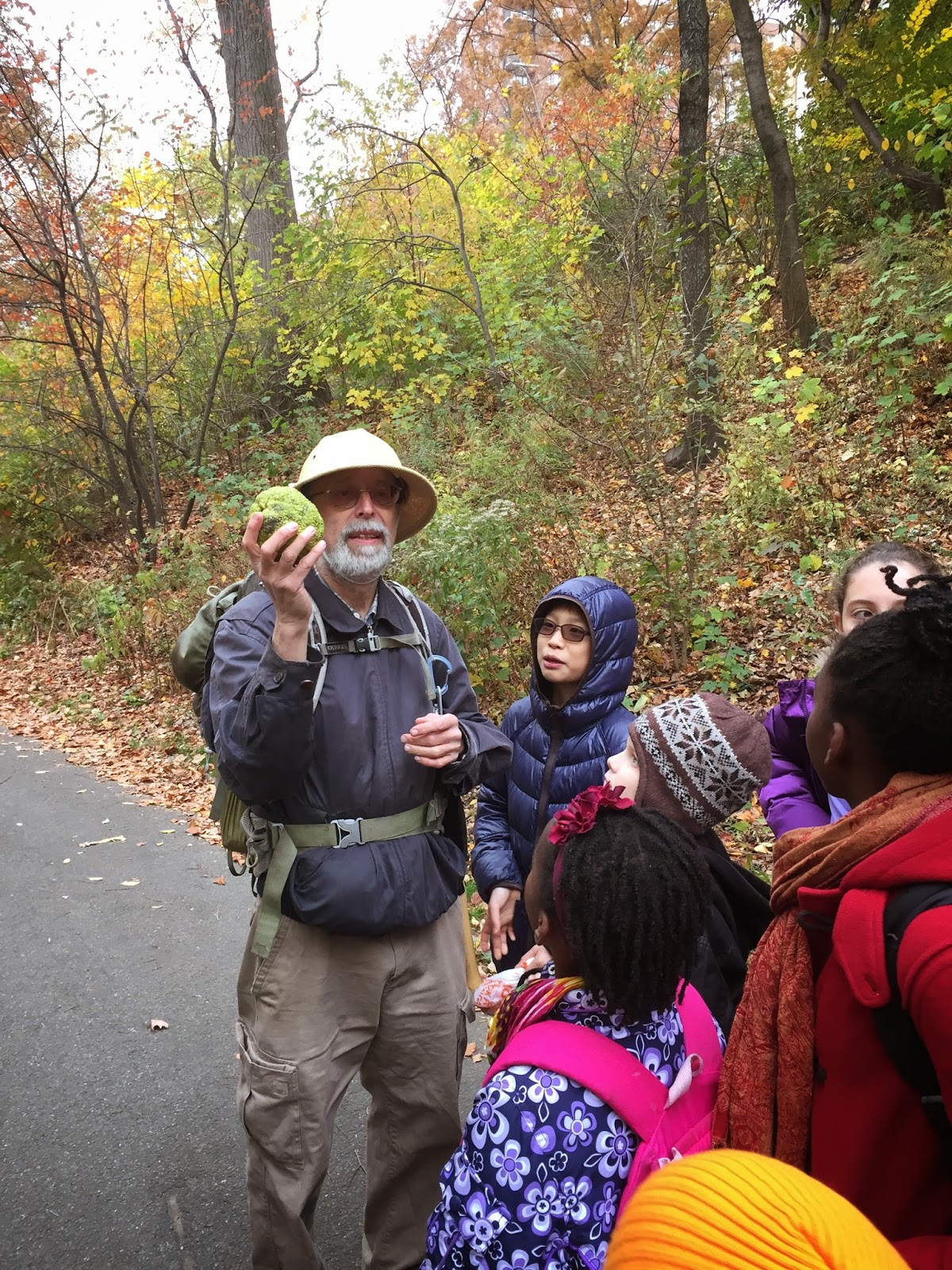 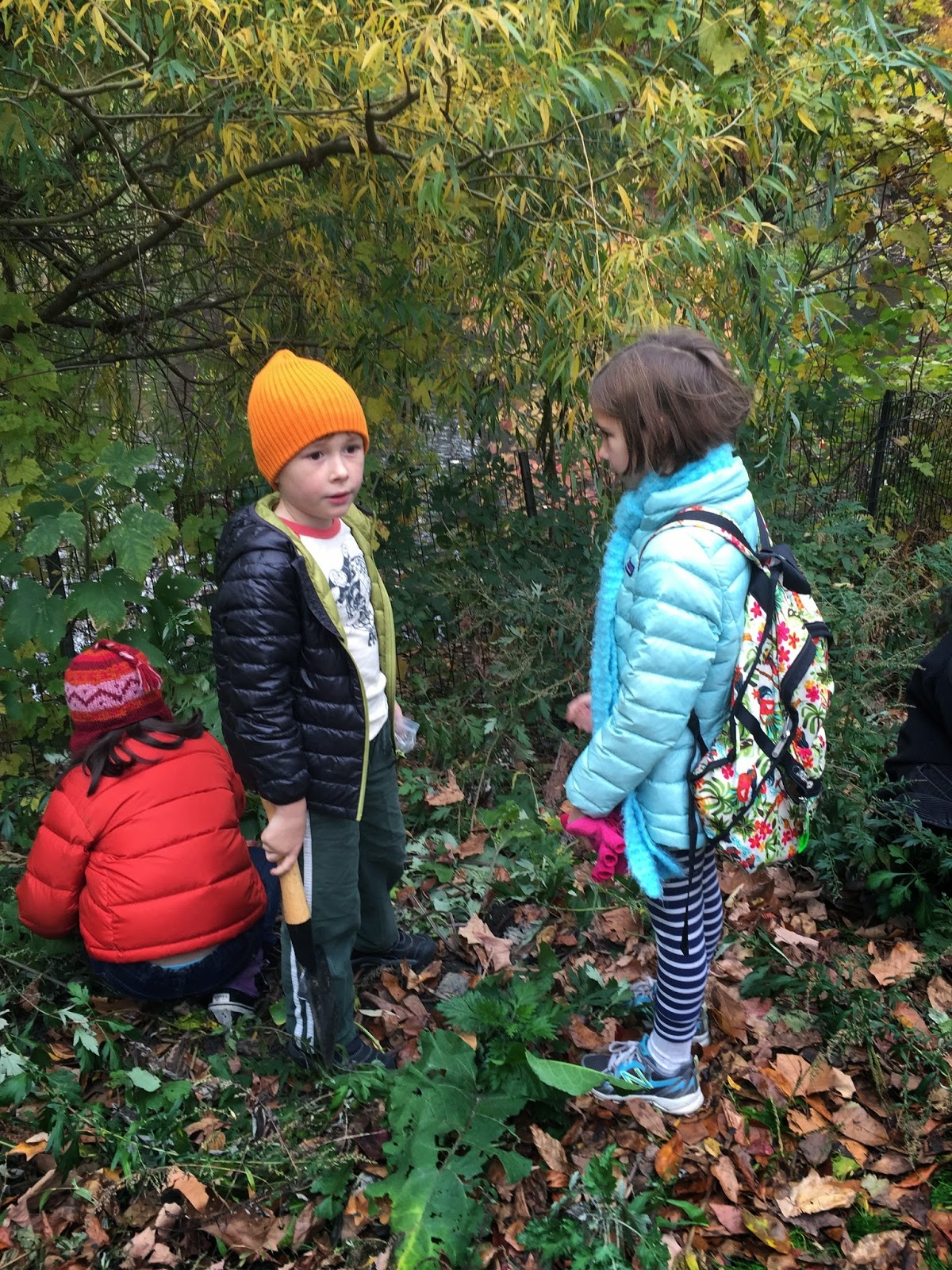 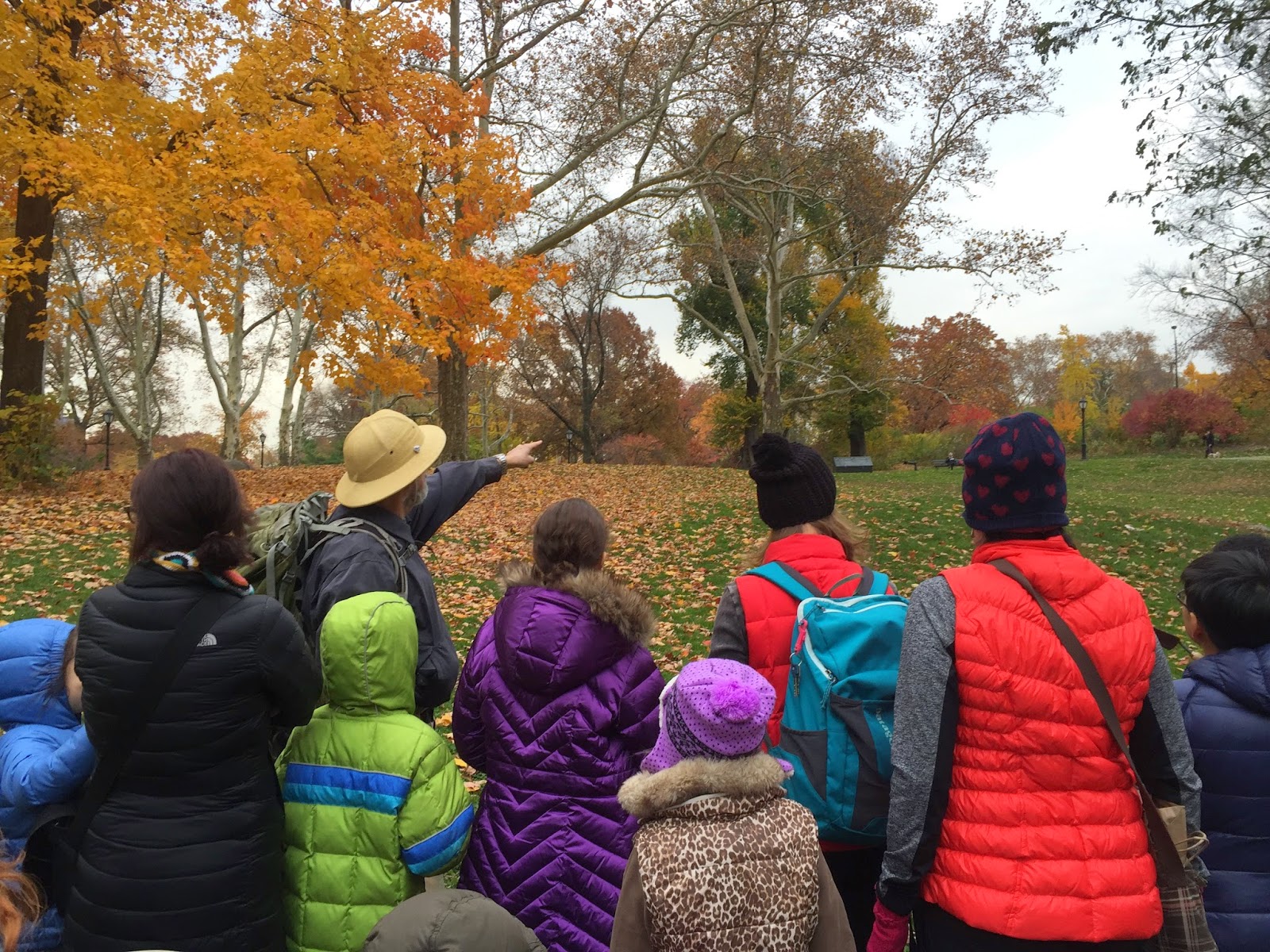 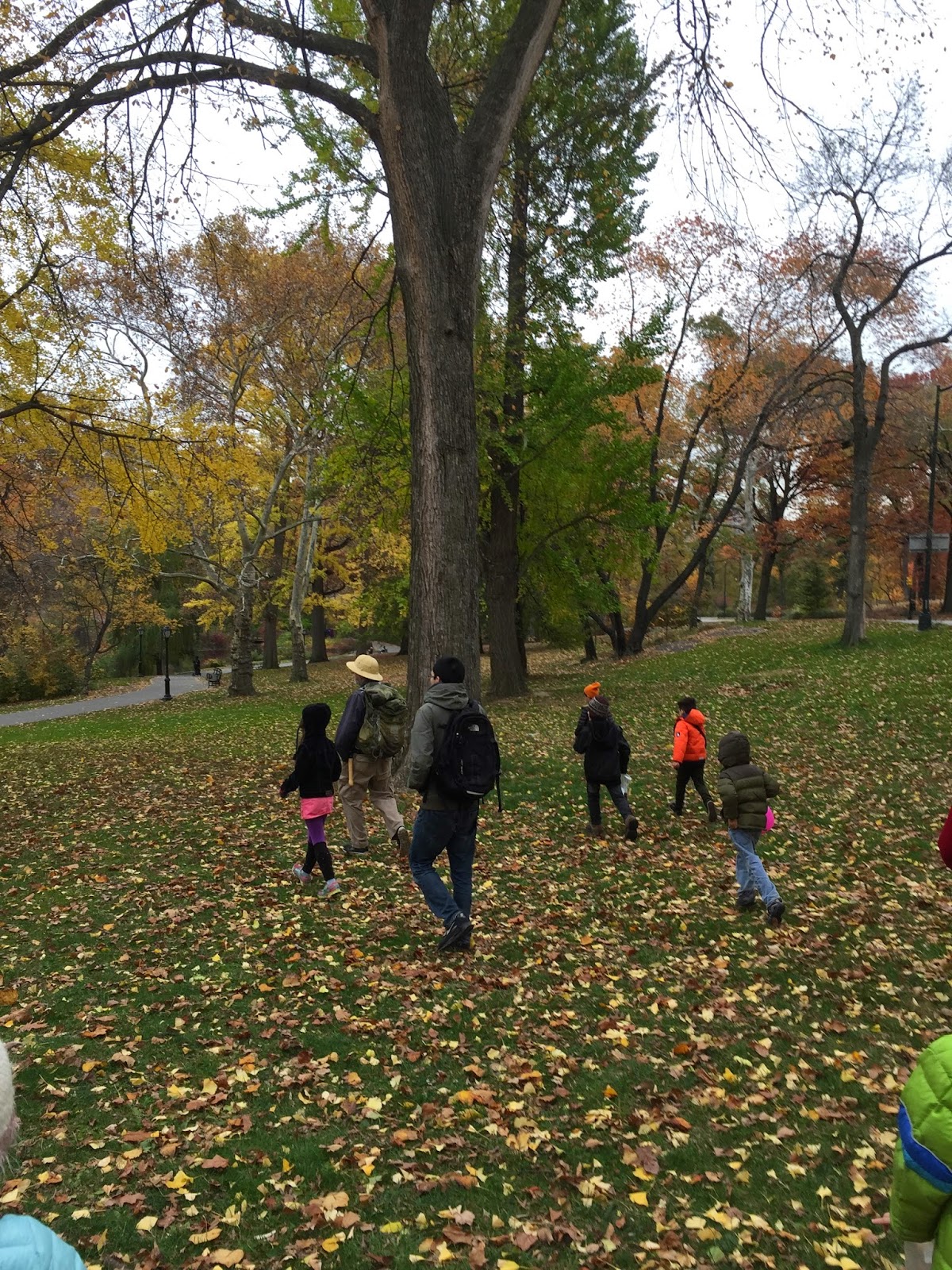 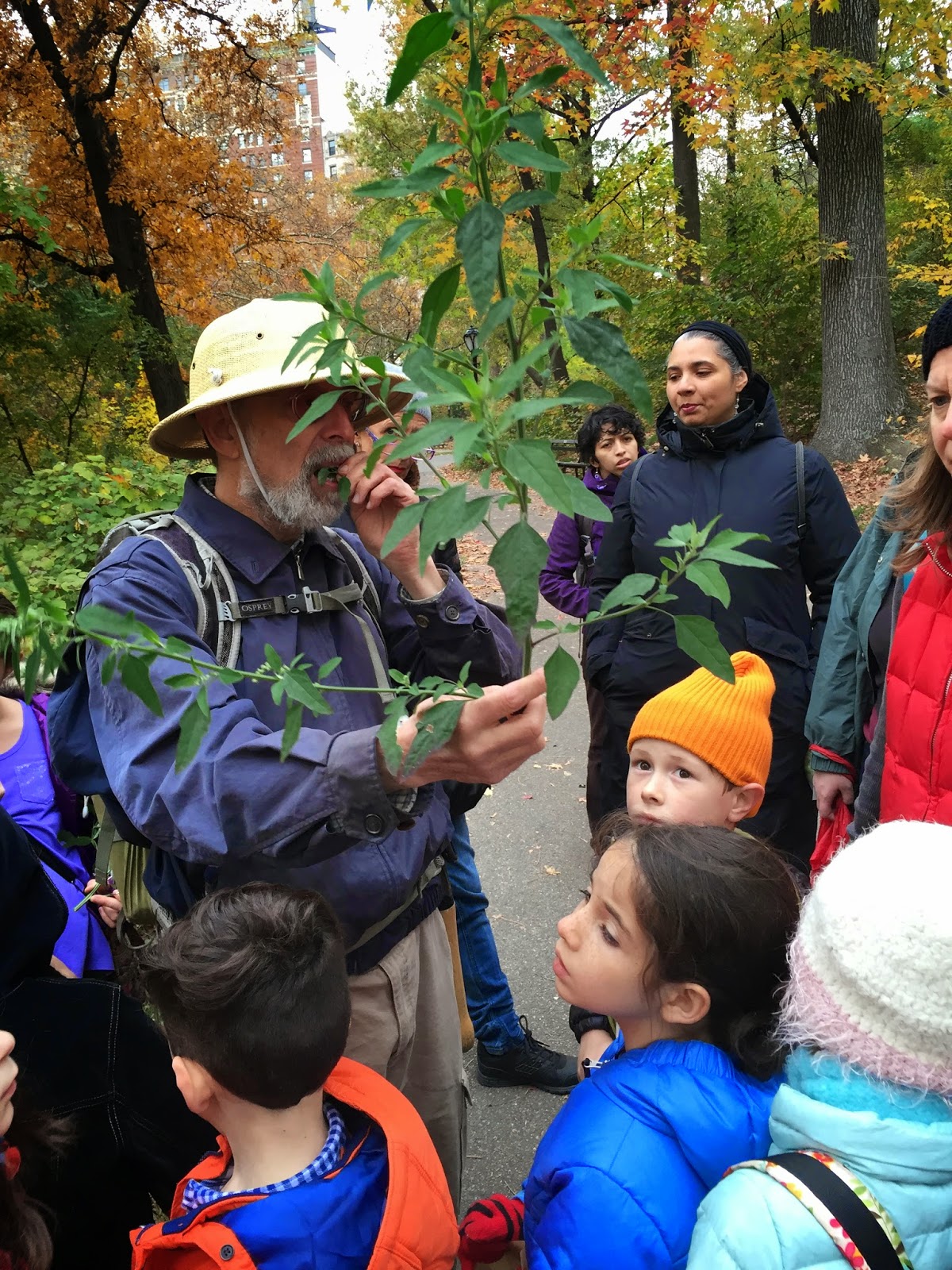 That same night we met Kevin after work at the Natural History Museum for a Members Only opening of a new exhibit, Nature's Fury.  I just love going to those exclusive exhibit openings (remember the Pterosaurs?).  Not only do they give you free wine but you get to hang out in the museum at night and see the exhibit when it is much less crowded.  As the name suggests, the exhibit is about the science of natural disasters such as earthquakes (lots of photos of San Francisco), tornadoes, hurricanes and volcanoes.  I was a little worried that it might be too disturbing for the kids but they seemed to enjoy it. 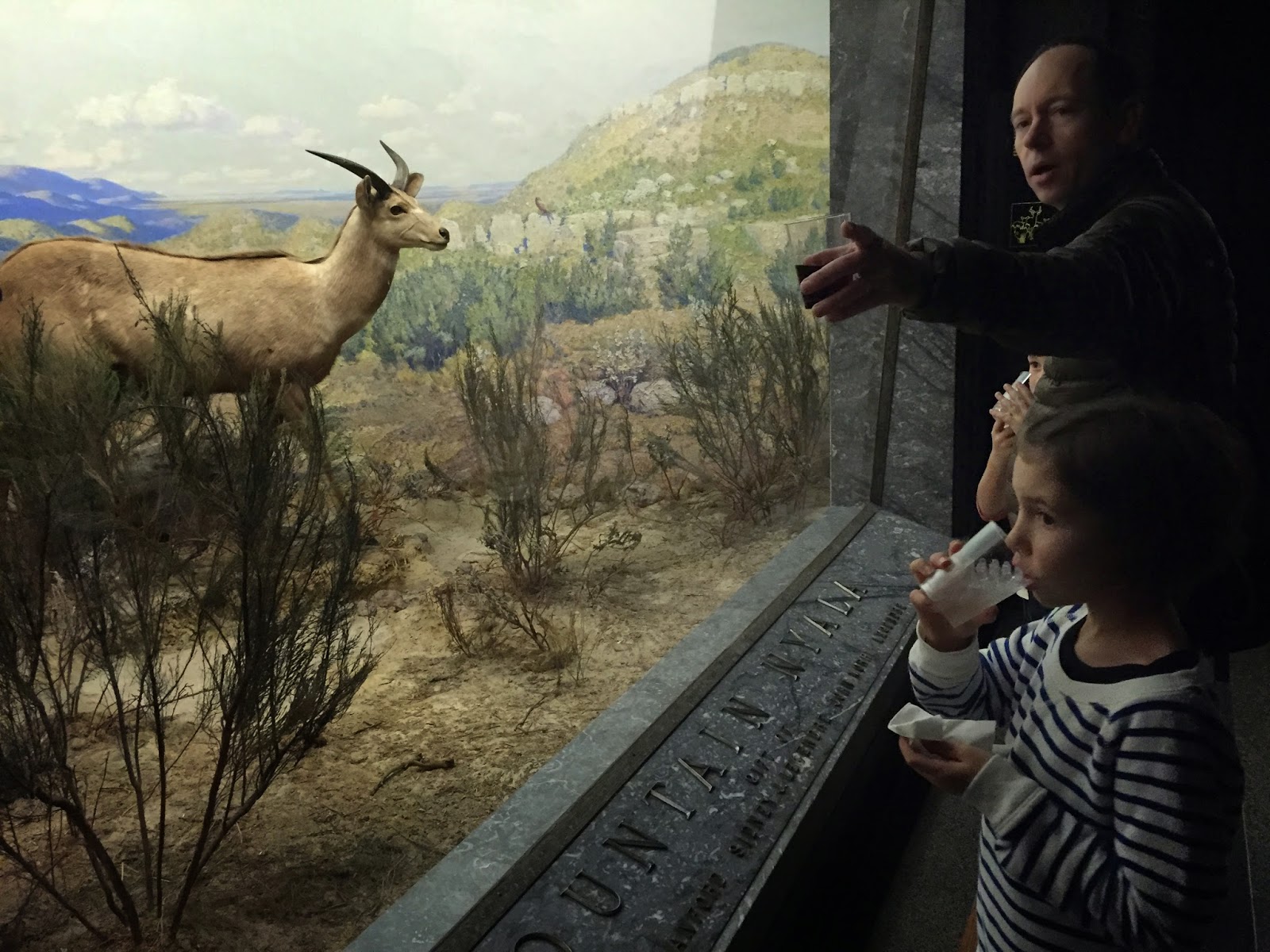 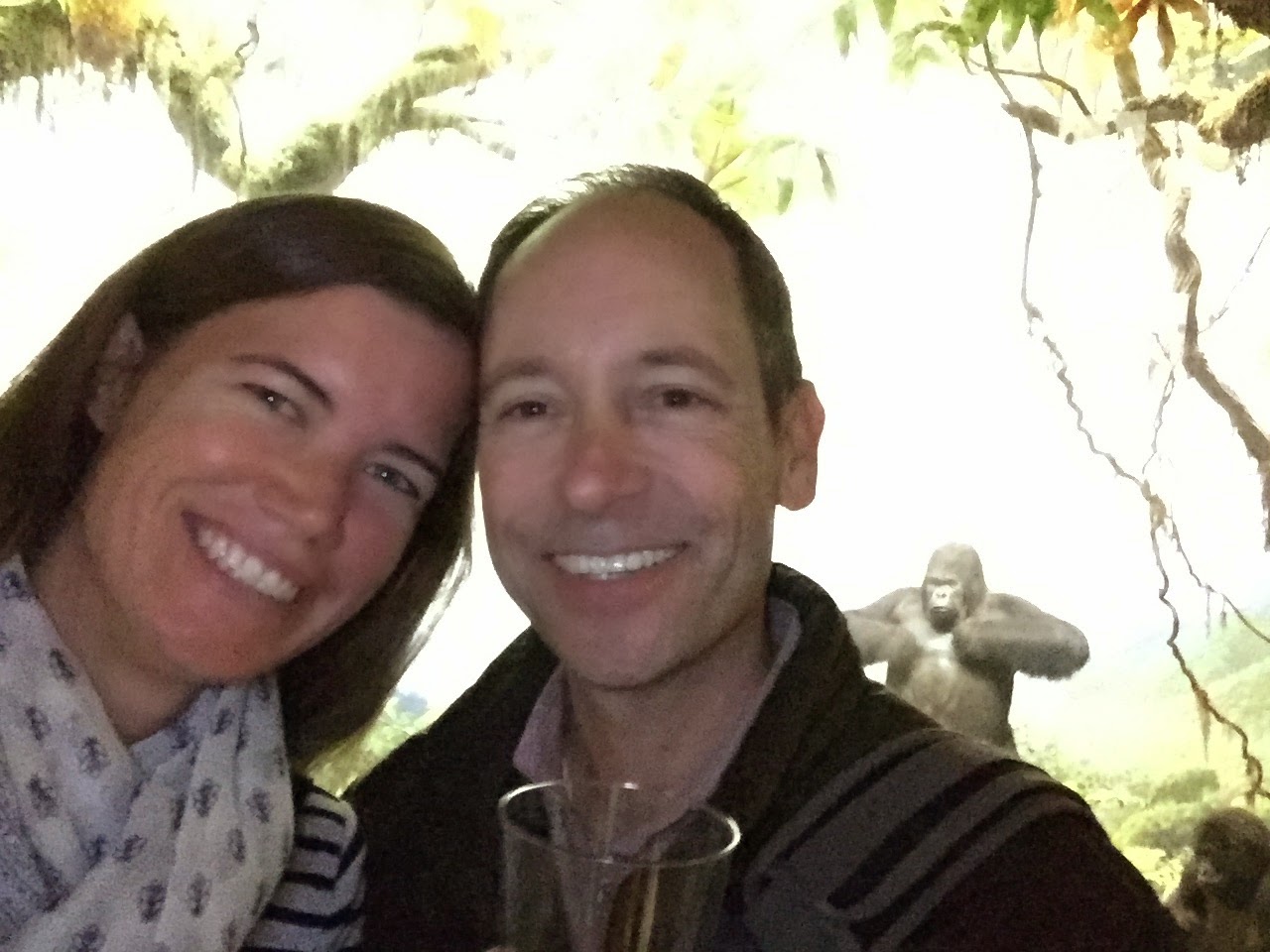 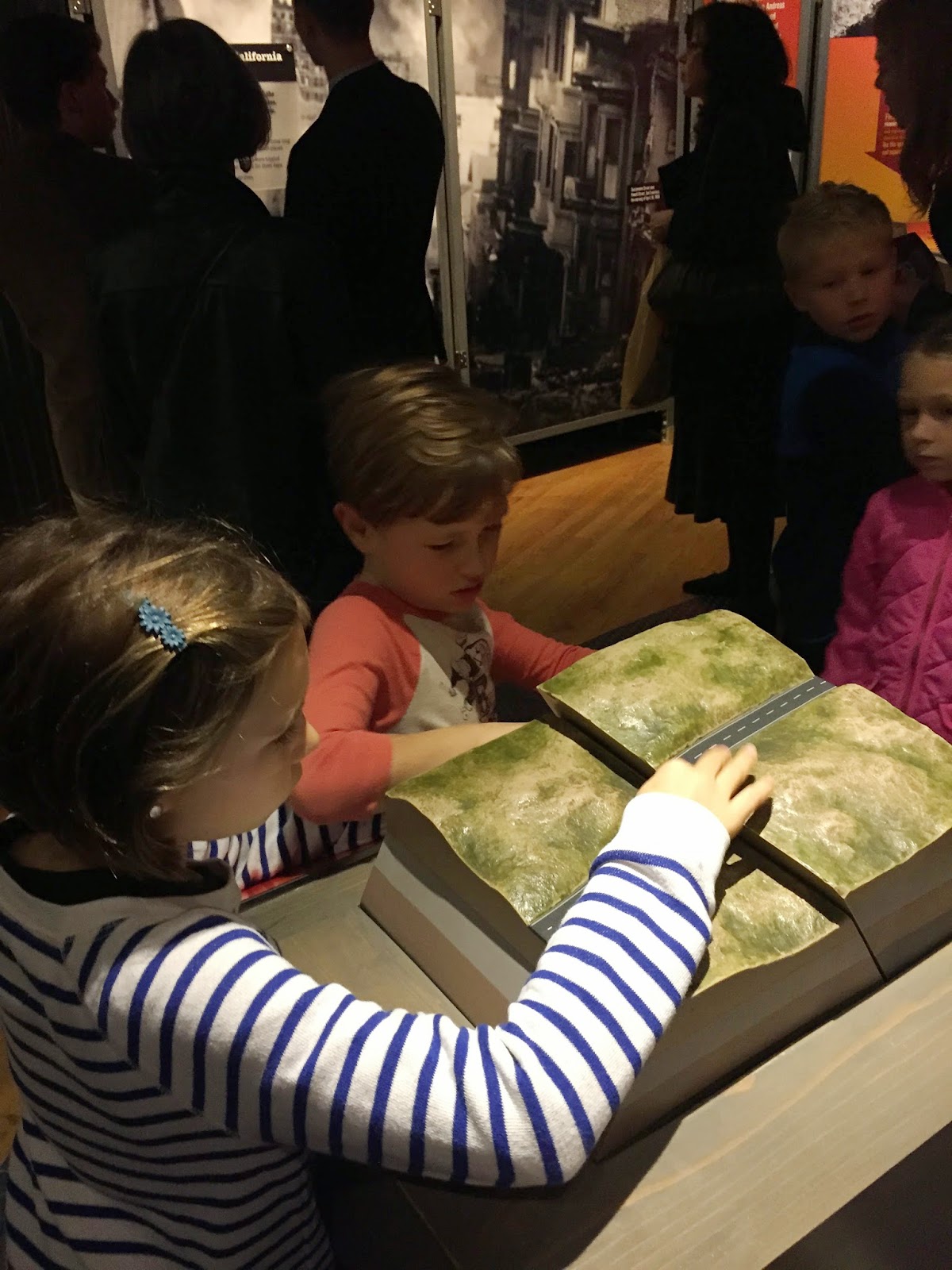 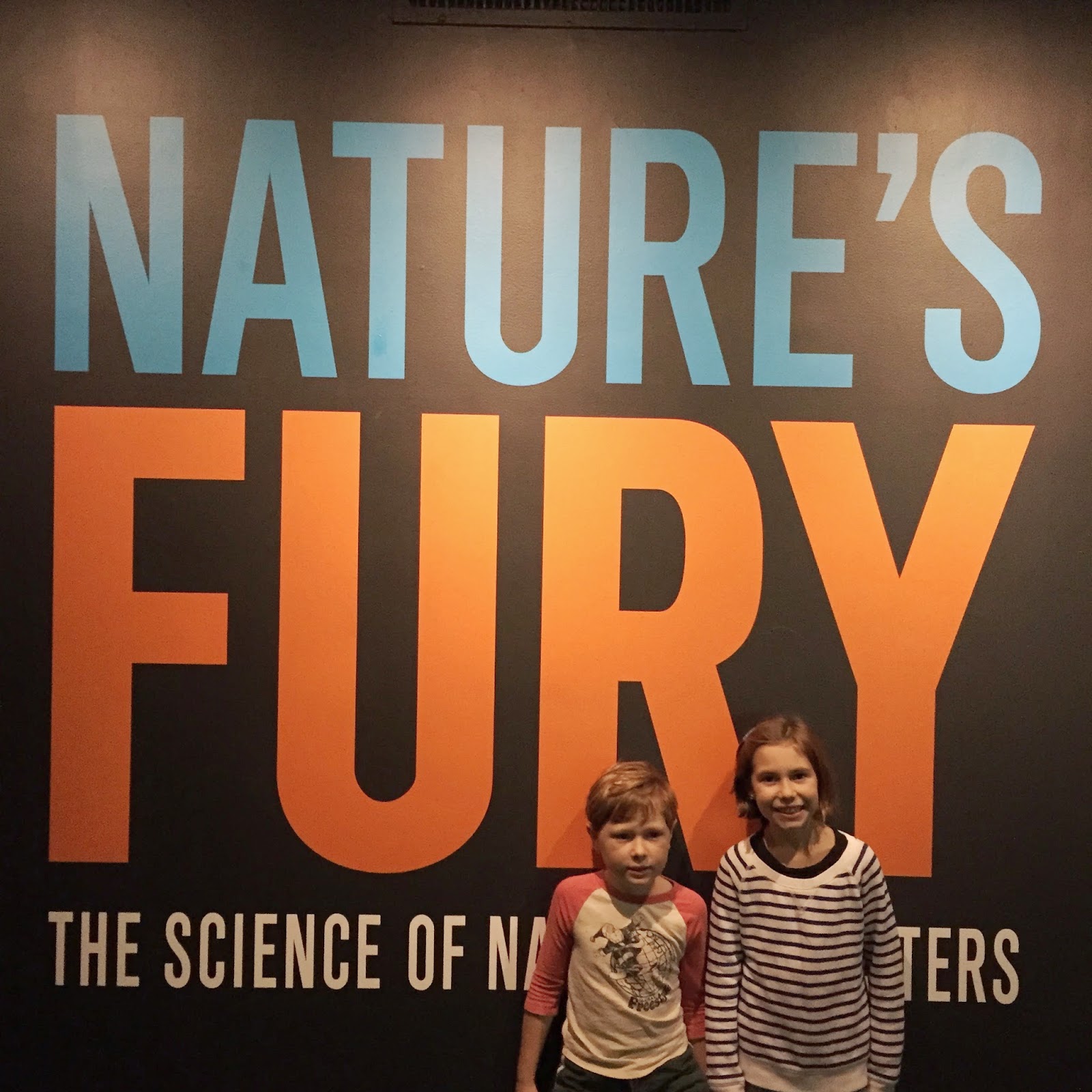 Kevin got to see his old college roommates from Vassar last night, Emily and Emmet.  He hadn't seen them in 20 years and he said it was like they hadn't missed a beat.  Old friends are good that way. 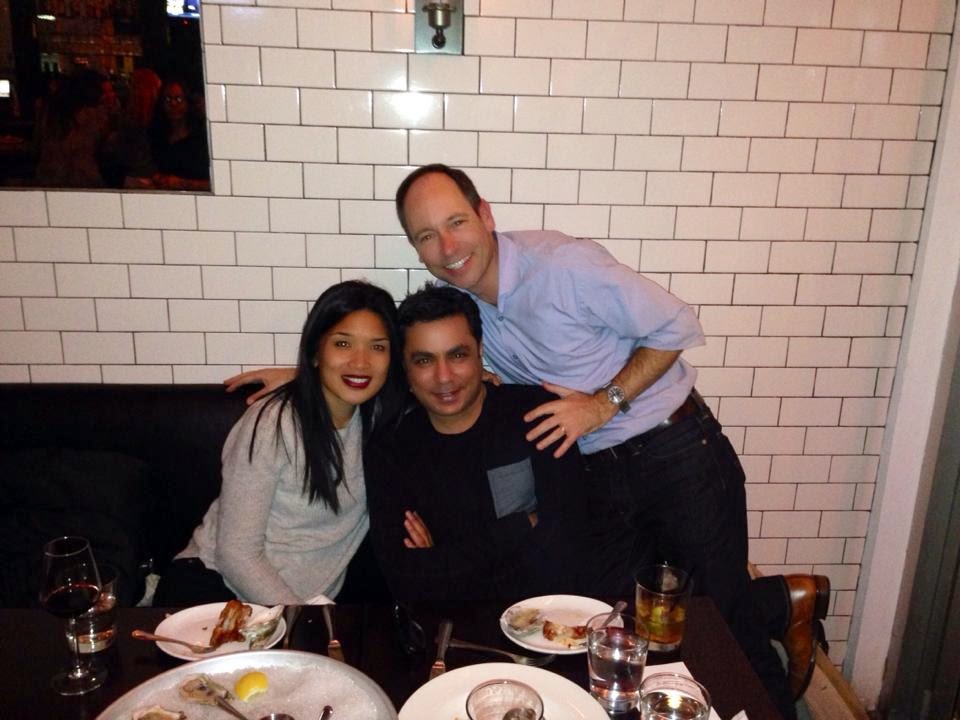 While Kevin was catching up over cocktails, the kids had one of their favorite classes of the week, World Mythology at The Met.  Apparently last night was devoted to studying Buddha, whom coincidentally we had just read about this week in our history book.  Ella was proud to show off what she already knew about him to the class.  She said they got to walk around the museum and sketch lots of statues of the Enlightened One.

Even though I was feeling like crap I hung around the museum and checked out an exhibit that I knew Kevin had no interest in, Leonard Lauder's Cubism Collection.  I got the audio tour to help distract me from my discomfort and really enjoyed learning about early cubism.  The collection was recently donated to the museum from Mr. Lauder of the make-up company Estee Lauder.  It's amazing how little I know about art history and how much renting one of those five dollar headsets can teach you in an hour.  I'm confident that had I just walked through the exhibit without the audio tour I would have made it through in about 15 minutes, coming away fairly unimpressed.  But having someone explain to me the process and history behind each piece really helped me to appreciate the works more.

I'm hoping to get some rest this weekend and let my meds kick in, but I'm guessing that won't happen.  The kids finally finish up their last weekend of sports for the year so I get to sit in 30 degree temps today and try to enjoy Holden's last soccer game.