I Wanna Wake Up in the City that Never Sleeps

Who knew vacation could be so exhausting?

There was no midweek post last week because honestly, all we did was recover.  We slept in (well, the kids and I did - Kevin dutifully woke at dawn and went to work), the kids played a new video game called Minecraft, and I did what needs to be done when you've been away from home for a month - unpacked, laundry, grocery shopping, housecleaning, blah, blah, boring, boring.  Plus, we had a bit of rain last week so it was a nice excuse to just hang out in our tiny apartment and plant our roots again. 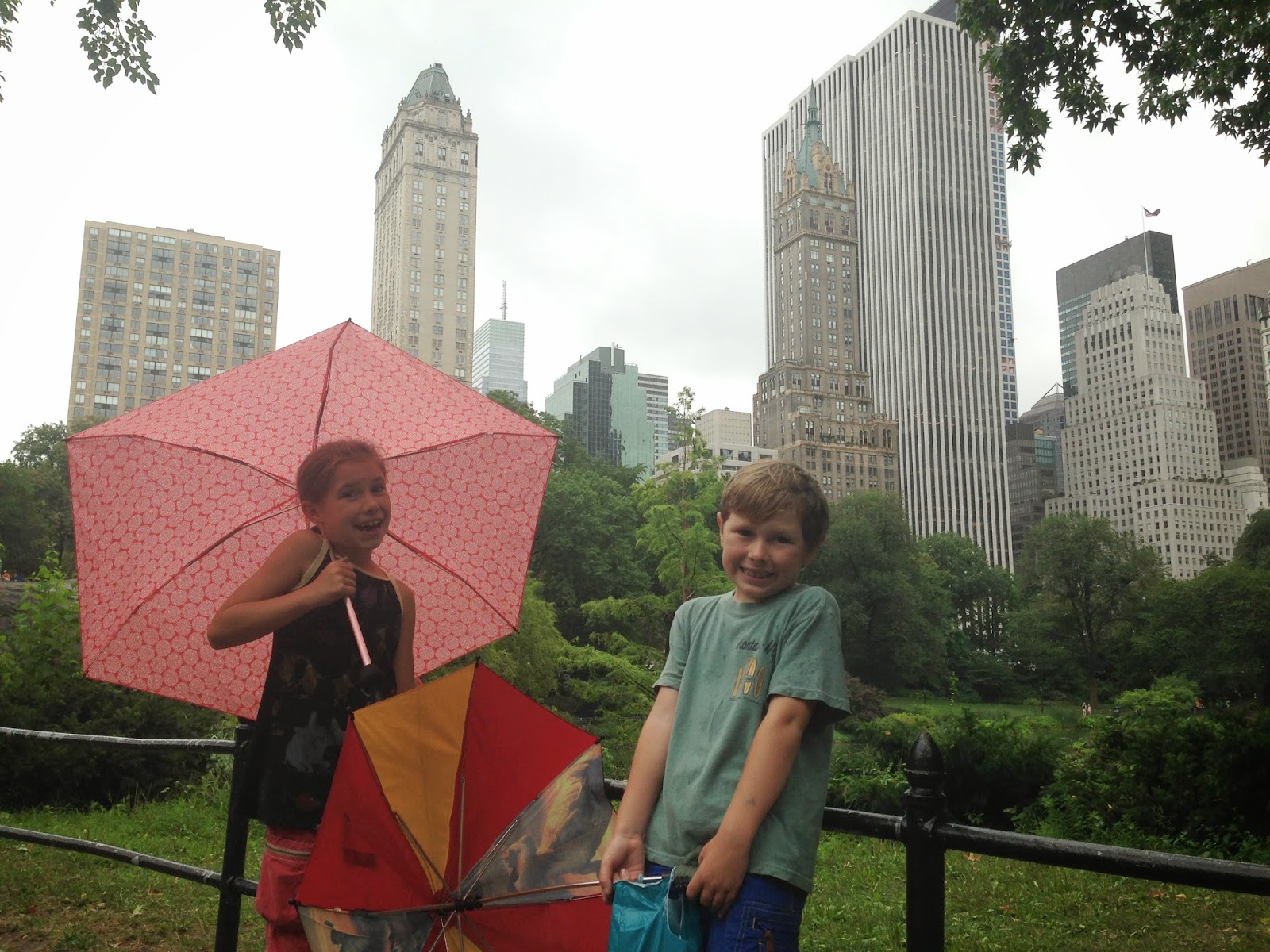 We did get out early in the week briefly to see my old friend Celia (if you were at our wedding, you might remember that she read a poem) and her daughter Ariel, whom I hadn't seen in years and could hardly believe how big and beautiful she had gotten.  Luckily for my kids, Ariel chose to meet at Dylan's Candy Bar, a three-story behemoth of sugar that would make Willy Wonka swoon. 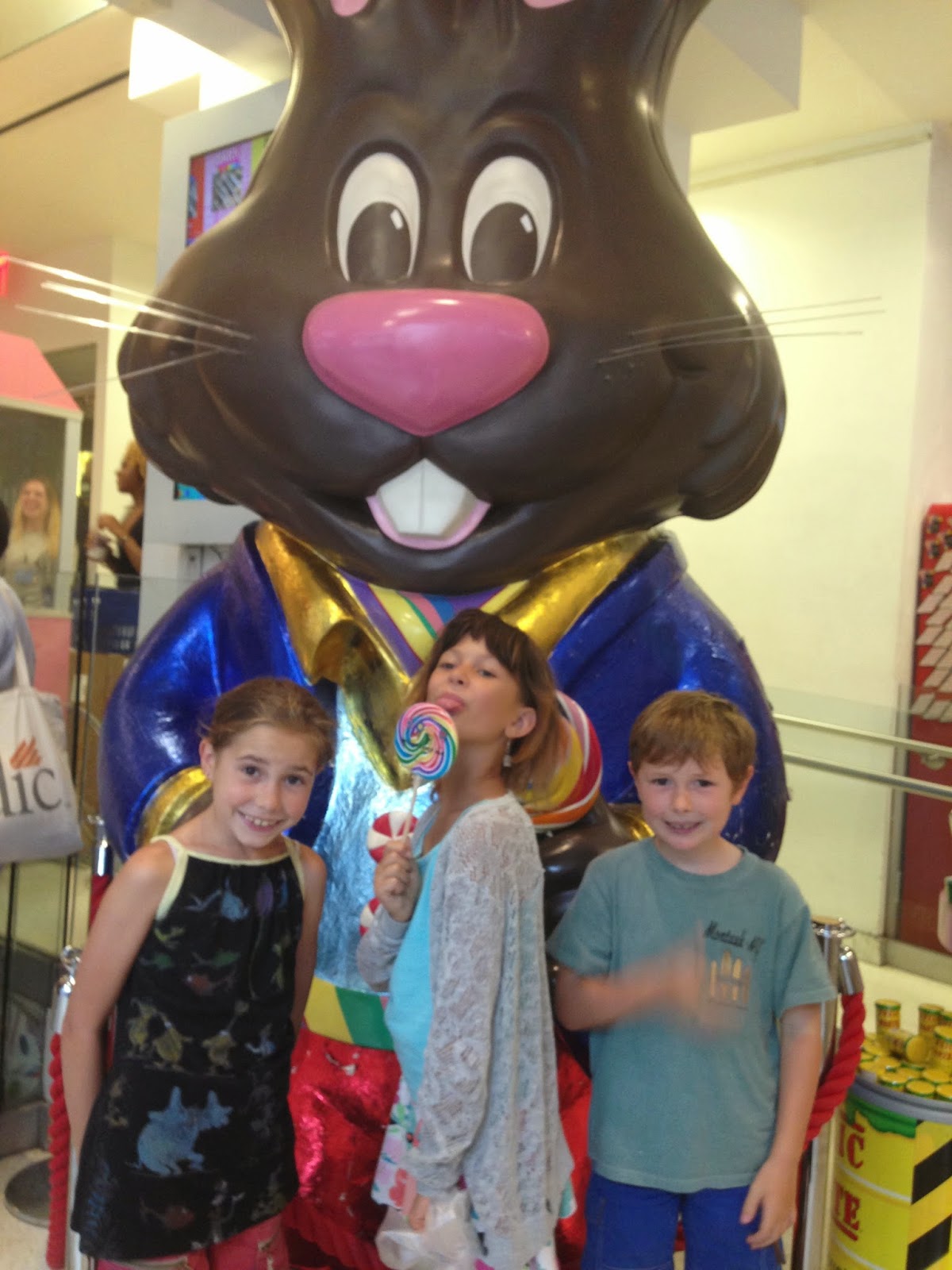 By Friday our brains were back in the right time-zone and the sun was out so the kids and I made our way to the West Village for an amazing performance of The Lightning Thief, the Musical.  I was skeptical about the "musical" part, given the book it's based on.  It didn't seem like a musical kind of thing (but what do I know?  Rocky is now the biggest grossing musical on Broadway). 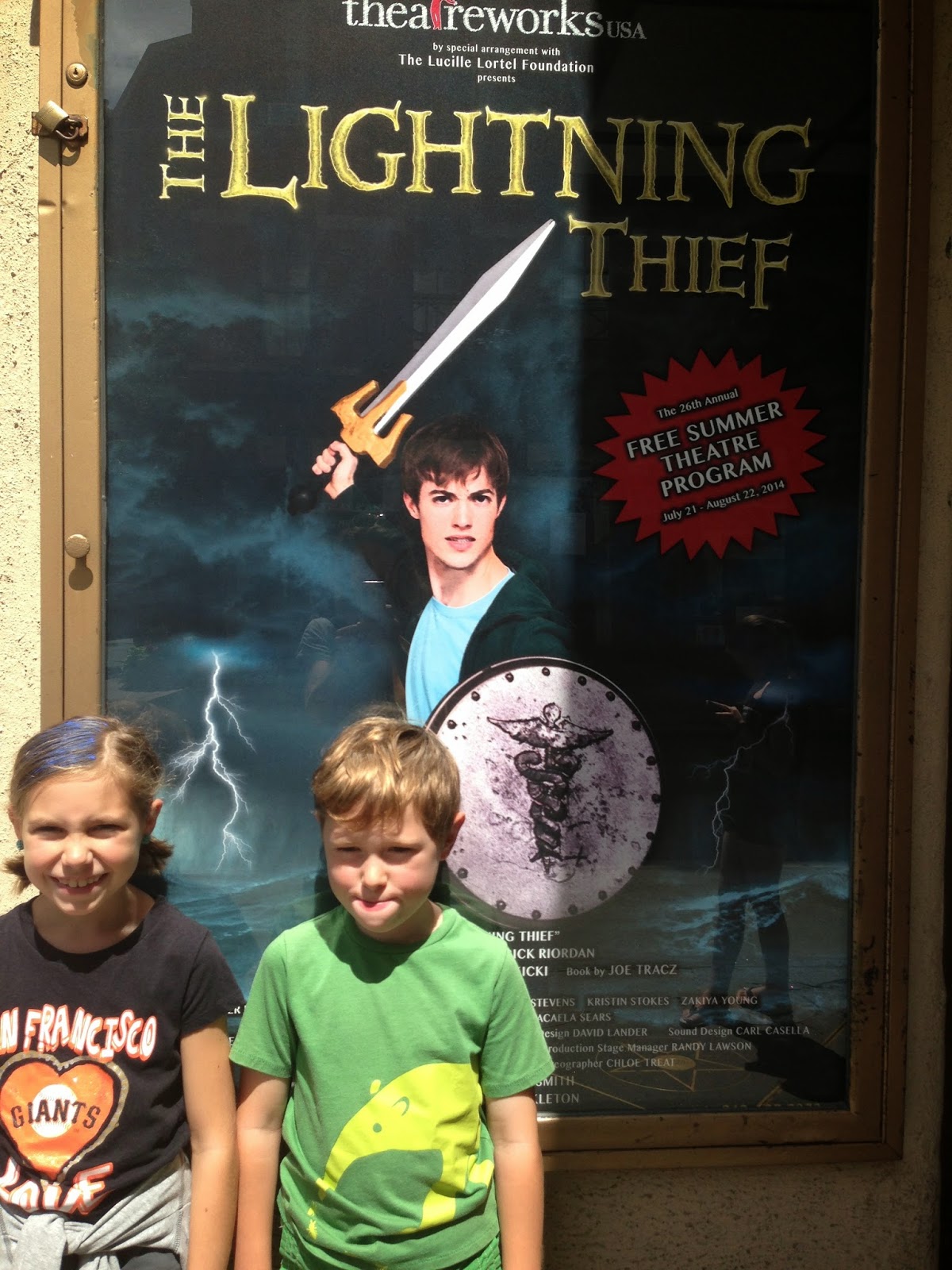 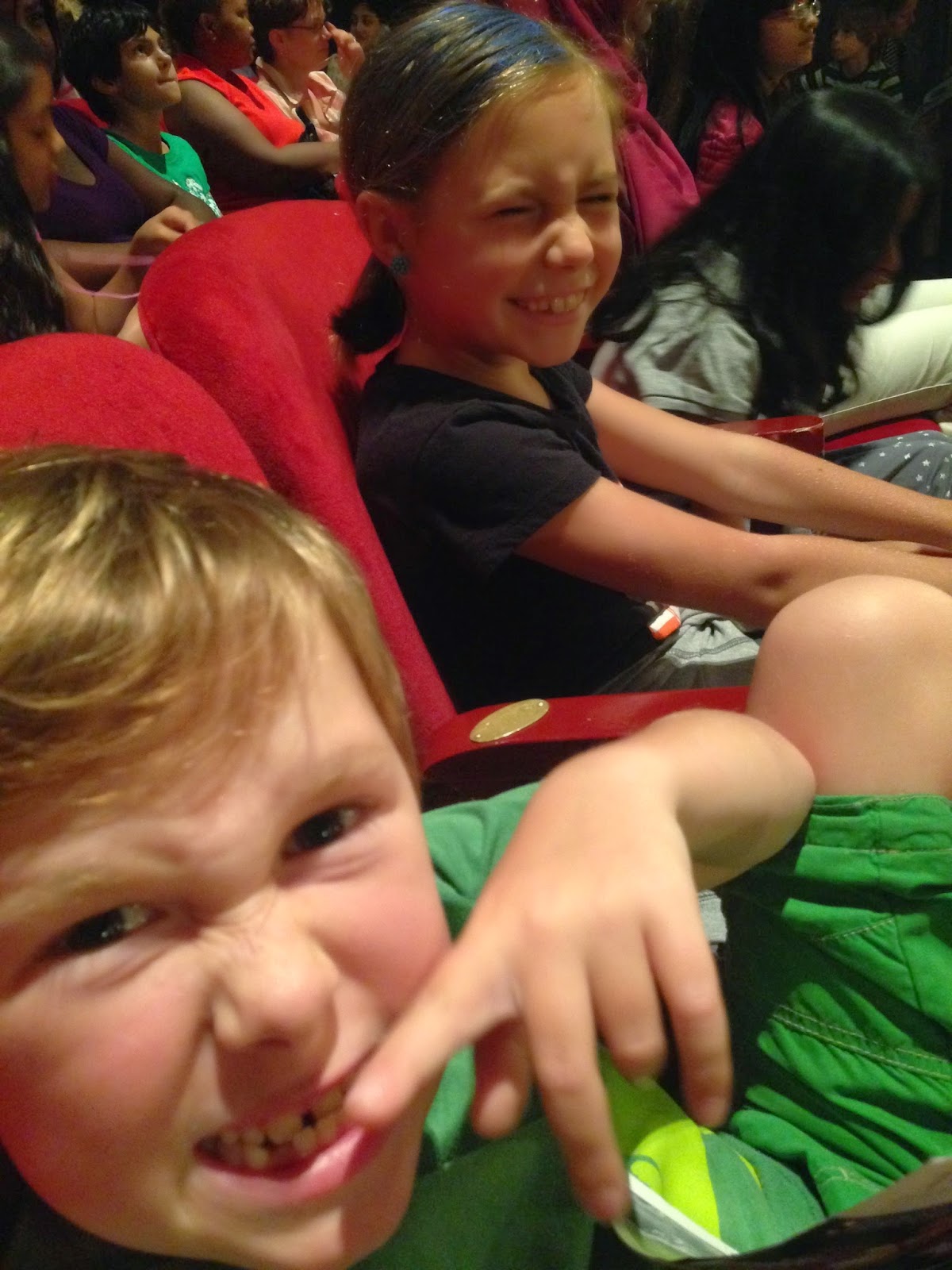 Throughout the entire performance I kept regretting that Kevin wasn't there to see if with us - he would have really loved it.  So guess what we're about to do today?... See it for a second time!  It's that good (plus, it's free!).  Ella has read another series by the same author, Rick Riordan.  Kevin and I were so proud of her because each of the three books in the series she read were at least 500 pages long and filled with a complicated plot.  I've tried to get Ella to read this Lightning Thief series and Ella just rolls her eyes to the top of her head and sighs with exasperation of a teenager, "Mawwwwm, you know I'm into Egyptology, not Greek Mythology!"  Excuuuuuse me.  Well, I'm happy to report that after seeing this musical Ella is asking to pick up the first book at the library.


After the show we walked over to our favorite kids' book store, Books of Wonder, and spent literally 3 hours there reading.  When we saw a tiny mouse run across the floor and to the back of the store where the cafe is, Holden insisted we tell the store clerk.  He looked at Holden and said, "Welcome to New York, kid.  You're lucky it wasn't a rat."  I love New York. 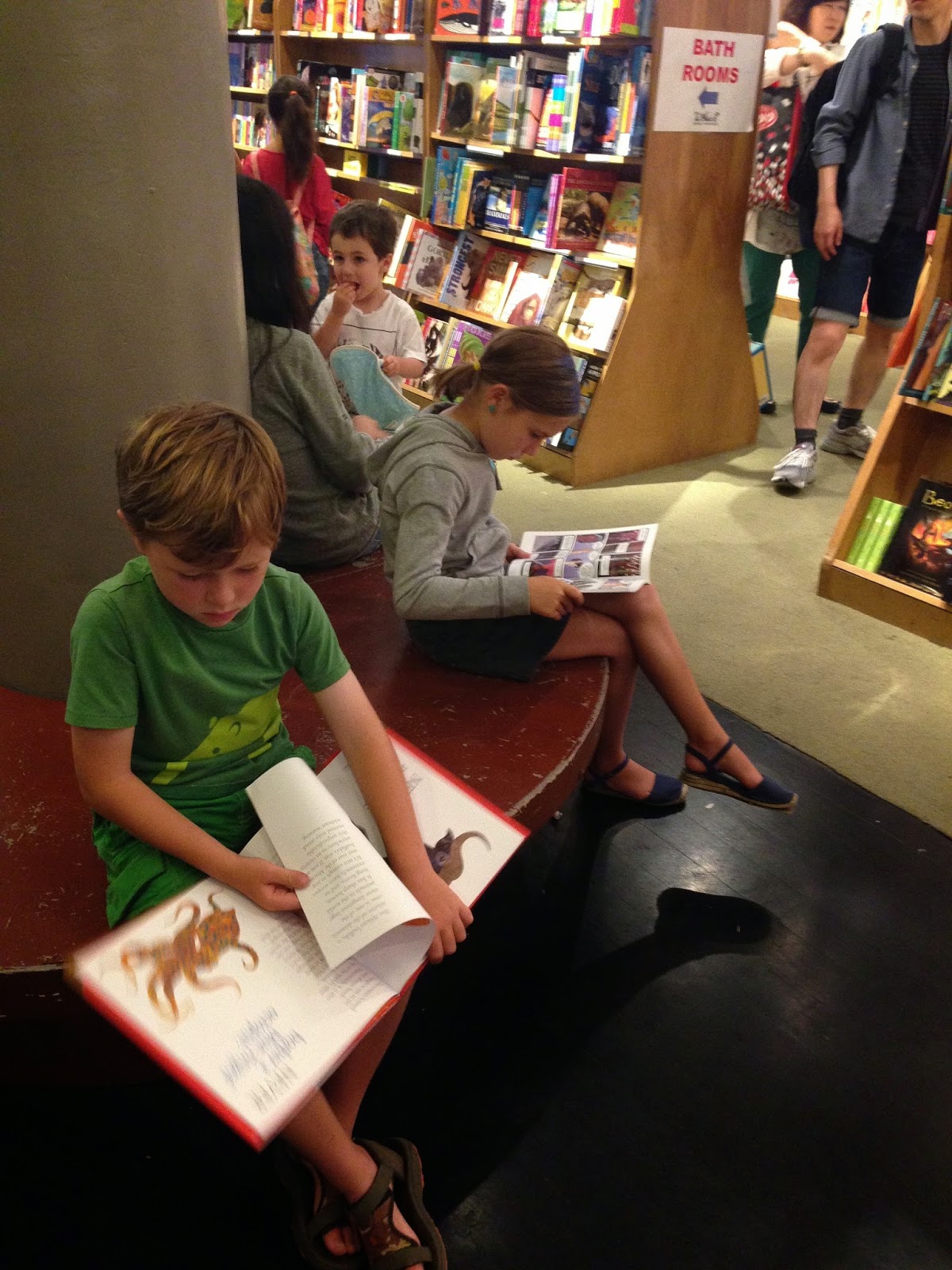 Yesterday (Saturday) was Summer Streets - the day where they close off Park Avenue to cars and let pedestrians and cyclists run wild.  We walked a couple miles (while the kids scootered) and enjoyed the sunshine. 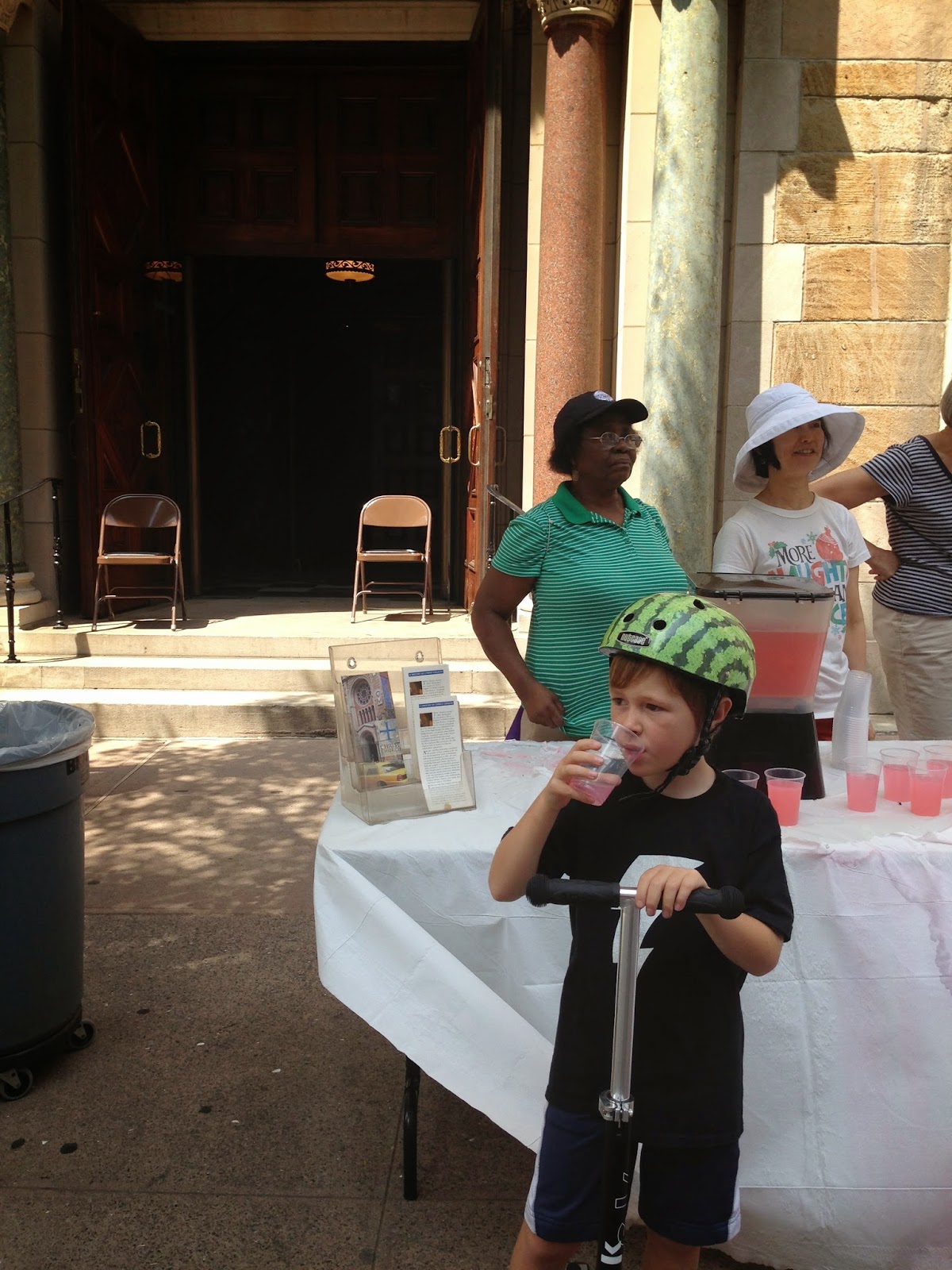 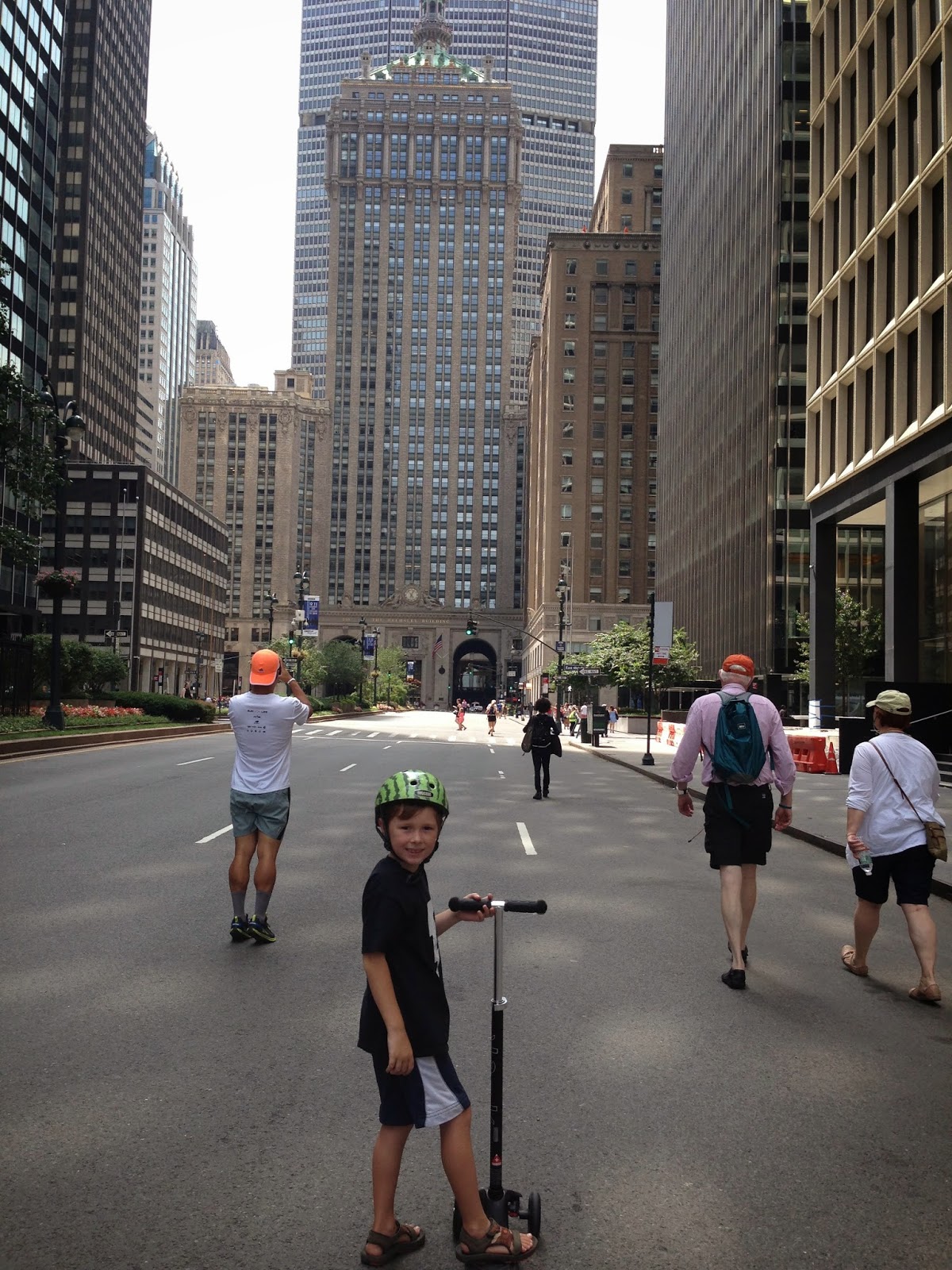 We also made a pit stop at The Julliard School Store because when you're in need of good music sheets for kids, why not go to the source?  I may regret that stop because now the kids are both learning the theme song to the recent LEGO movie, Everything is Awesome.  Which means that I am hearing it over and over and over... 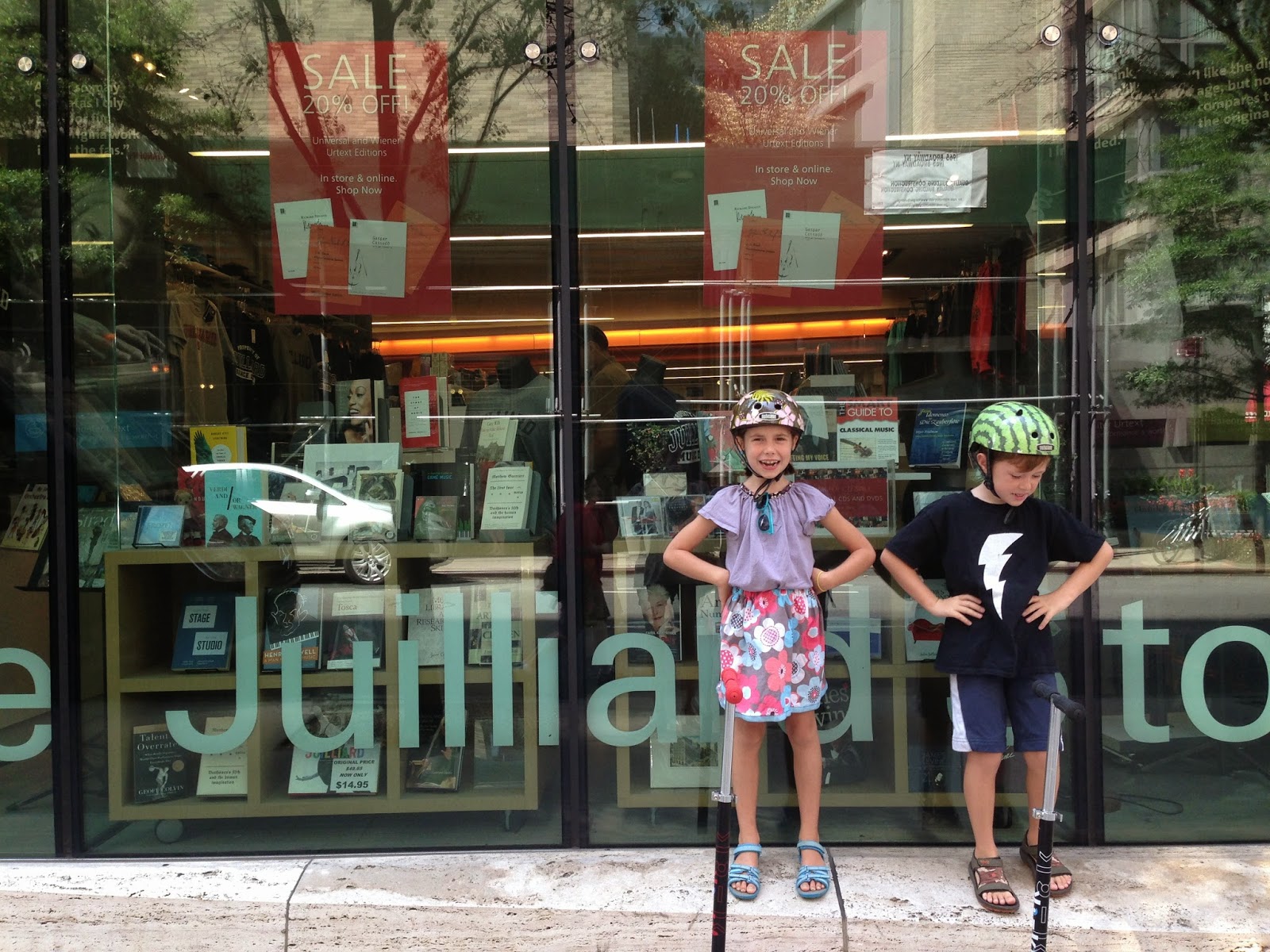 And finally we ended up in Bryant Park, Kevin and I reading in folding chairs we found while Ella and Holden rode circles around us on their scooters, all while being serenaded by a Frank Sinatra impersonator. 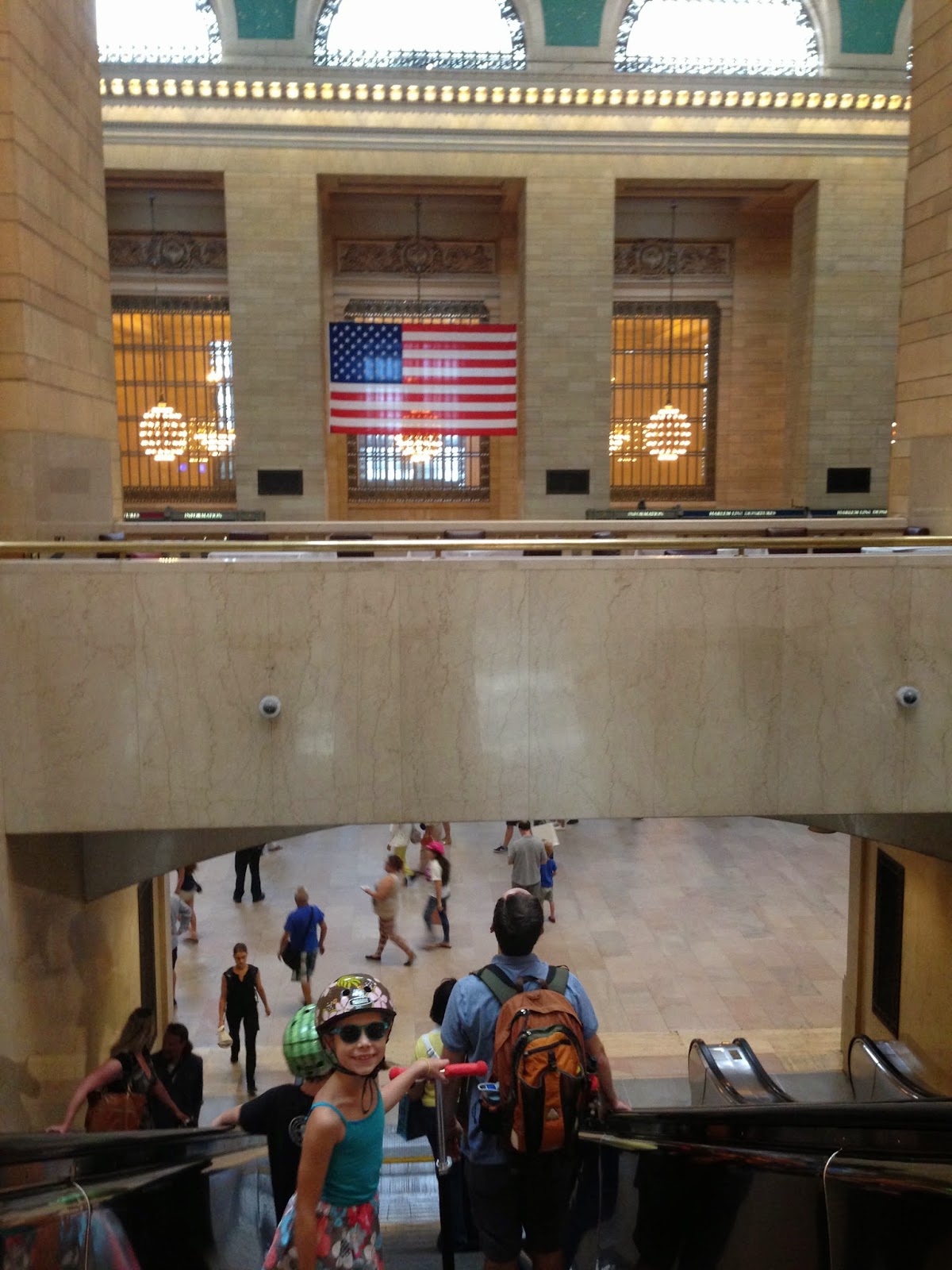 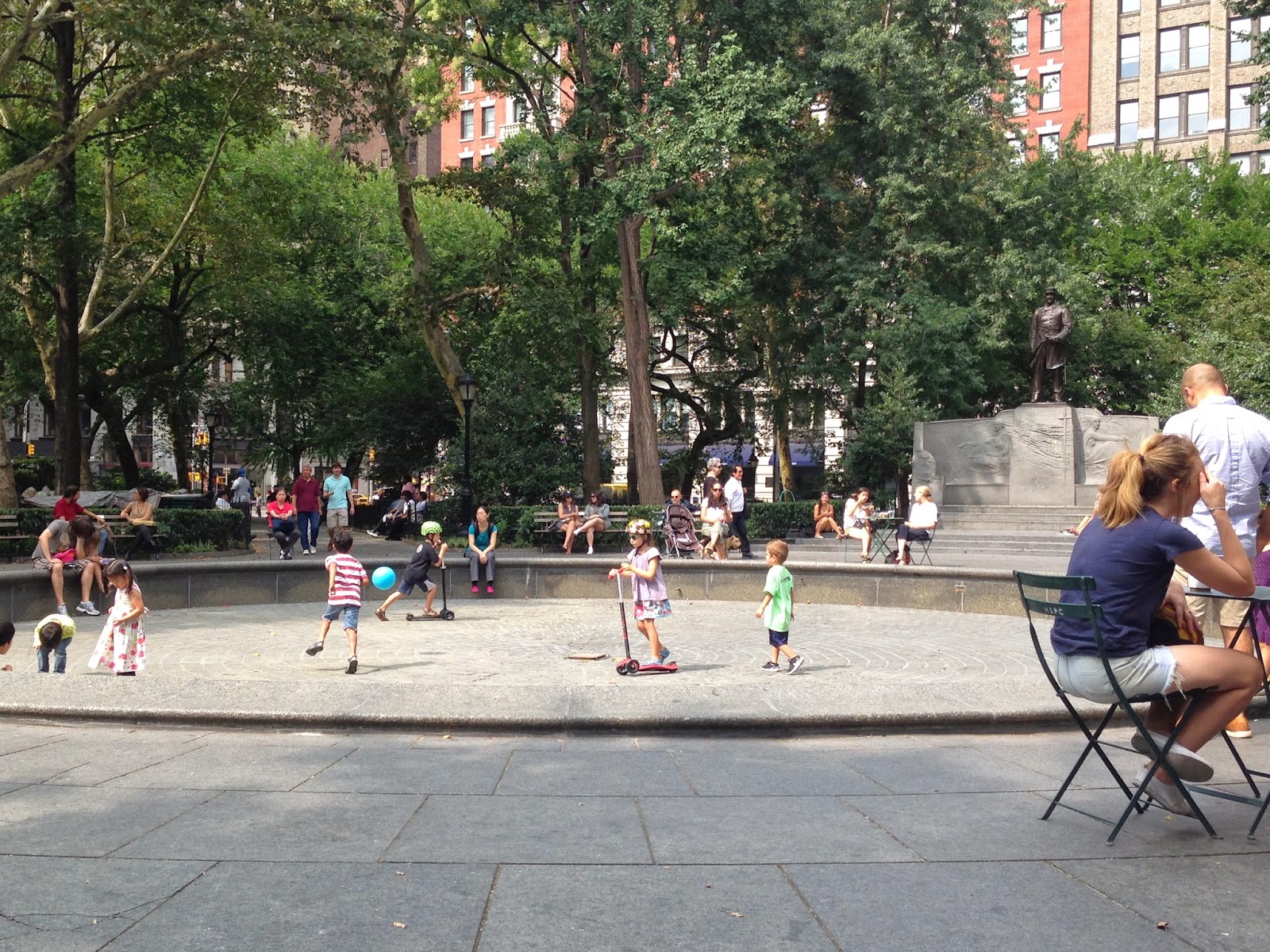