The wall of humidity hit this week.  Temps in the 90s and there's no walking as far as the corner without dripping in sweat.  I'm ready for a vacation.

Kevin and I started off the week with back-to-back concerts in Central Park on Monday and Tuesday nights.  Throughout the summer, the City Parks Foundation puts on concerts and events throughout the city under the name of SummerStage.  Monday night we joined our friends Sharon and Stefan to see The Counting Crows - a former favorite band of mine. 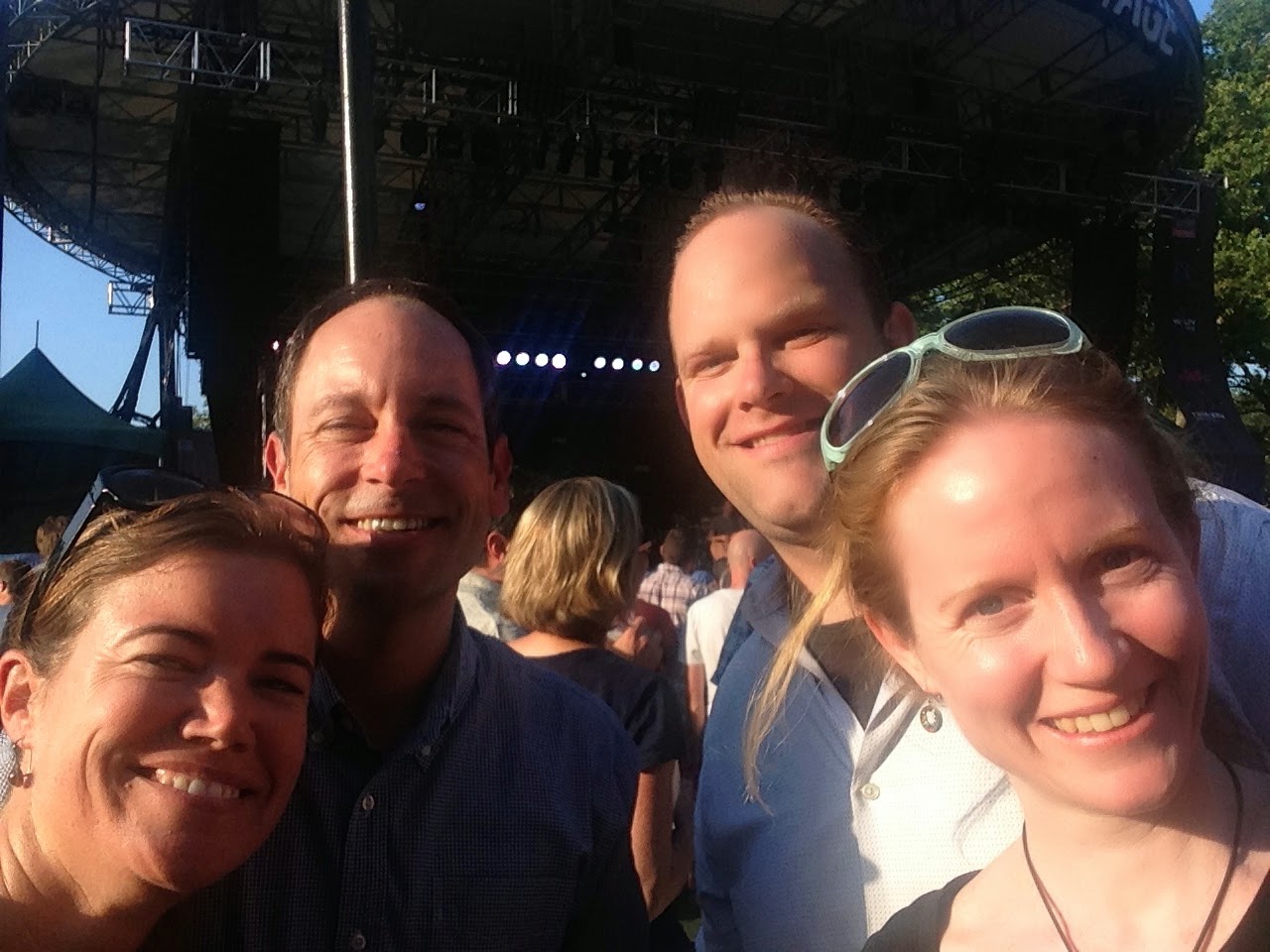 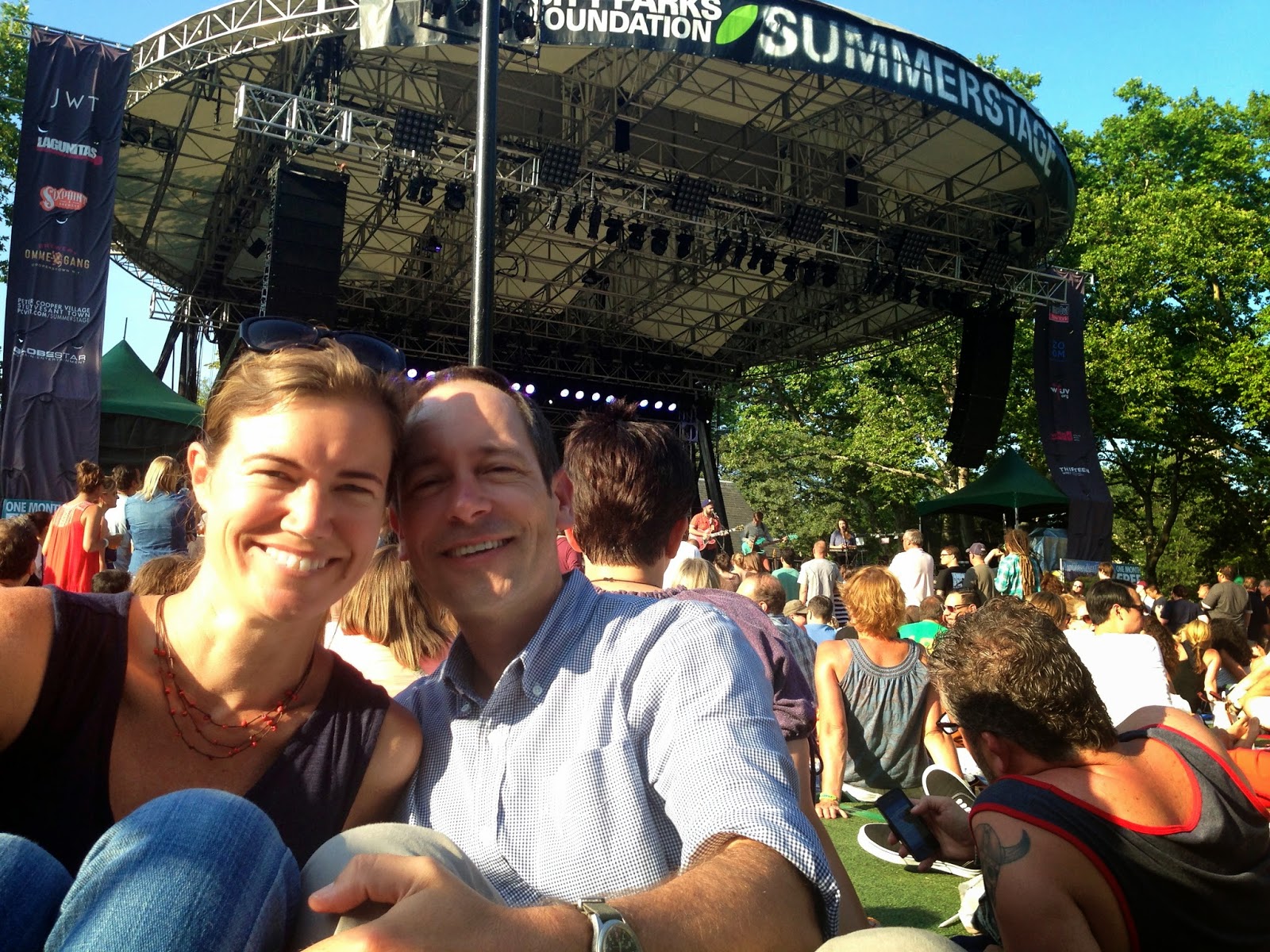 Tuesday night we saw one of our very favorites, Beck.  He always puts on a great show and is so talented.  The great part is that the venue in Central Park is so small that everyone is really close to the stage.  I was feeling my age after two nights in a row of dancing in a crowd for a couple hours each night and have been popping Ibuprofen ever since.

But before Beck came out, the opening band started playing.  We had never heard of the band and were only slightly paying attention, still finishing up our beers.  Then Kevin realized that the lead singer was Sean Lennon, the only child of John Lennon and Yoko Ono.  It was pretty cool to watch him perform just steps away from the memorial to his father in Central Park, Strawberry Fields. 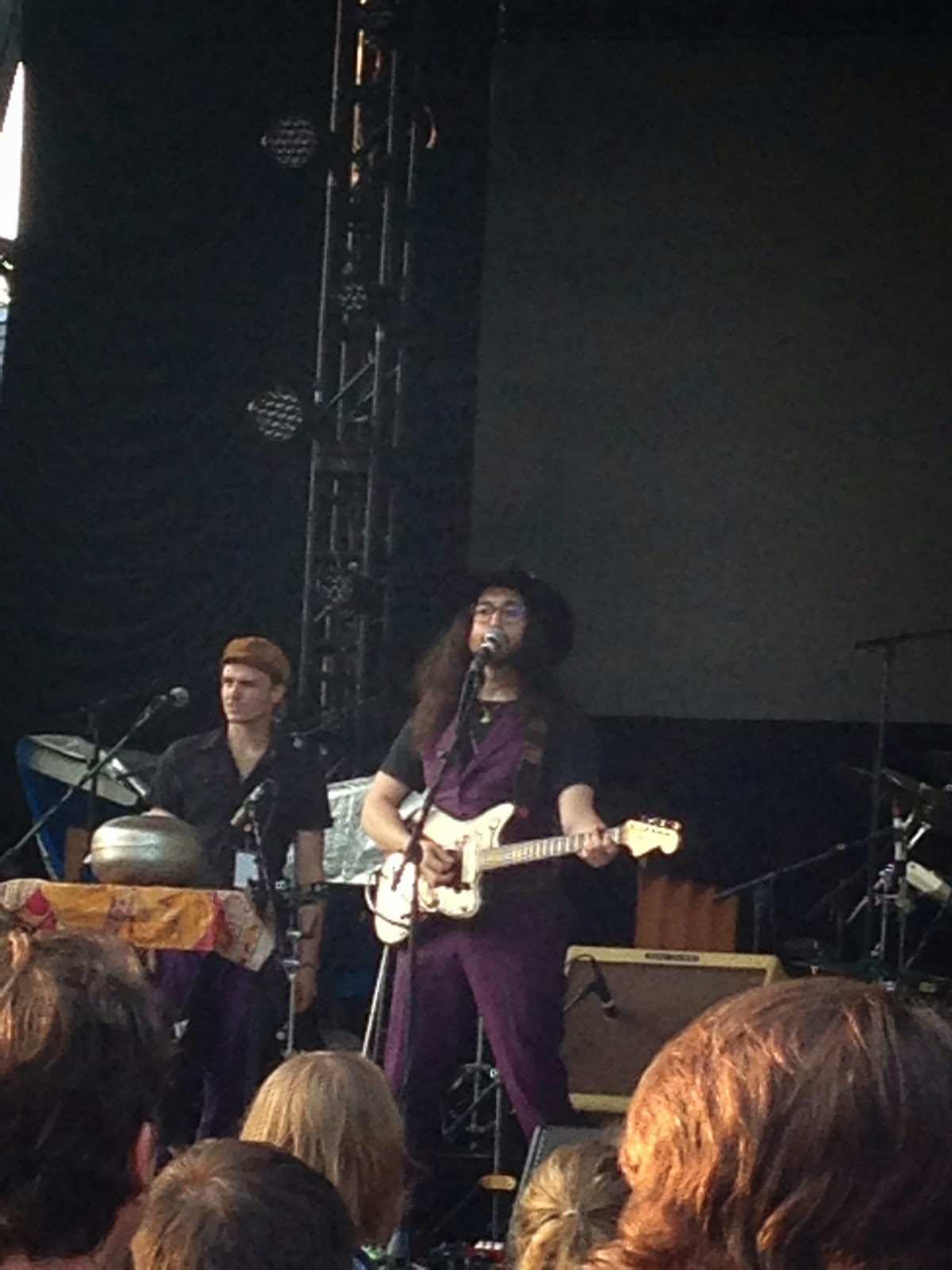 While the big kids were having fun listening to music in the park, the little kids were also enjoying Central Park with our awesome babysitter, Casey. 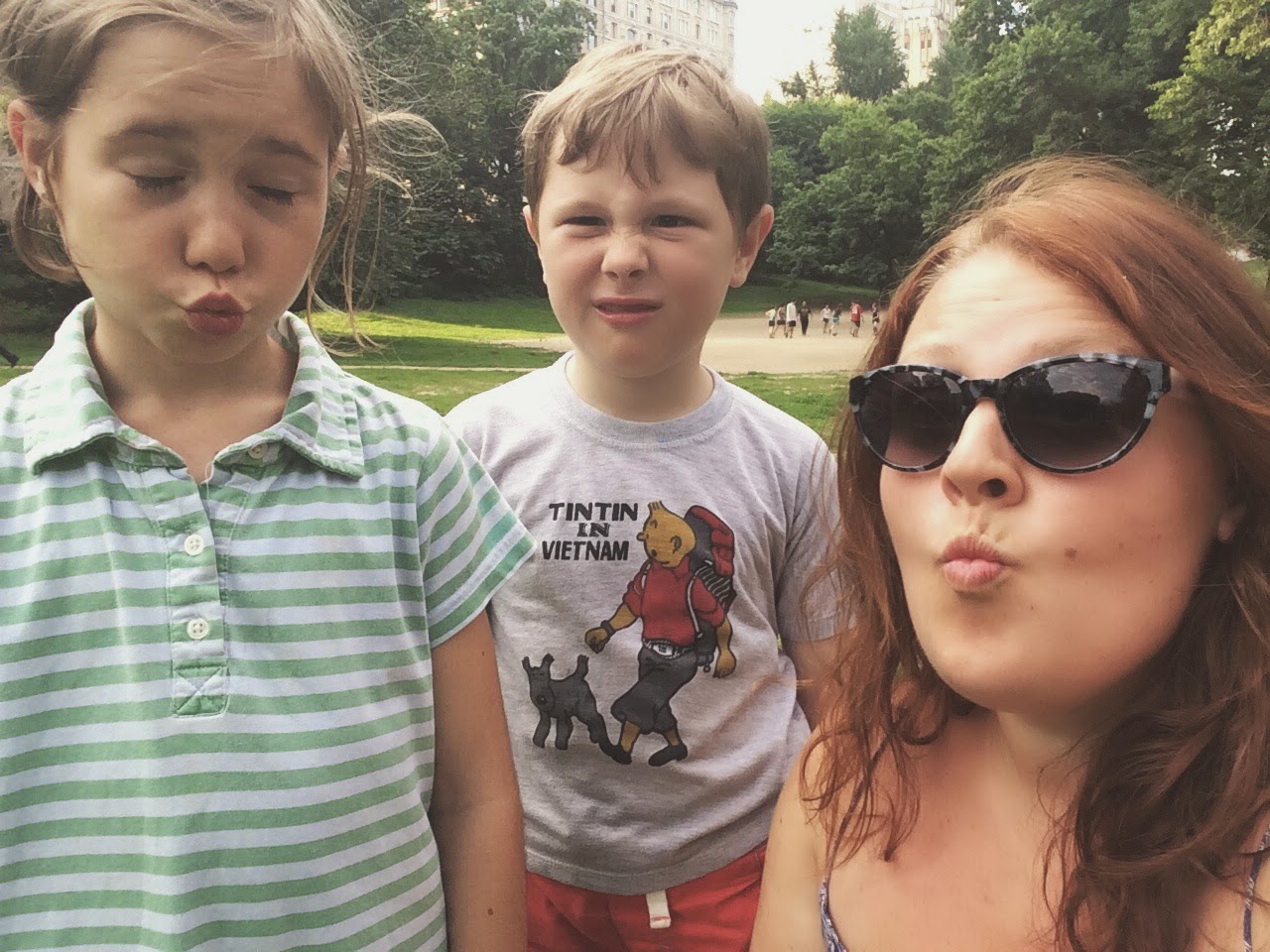 During the day on Monday the kids and I took our time getting up and ready.  We eventually made our way into the park for a picnic and some reading time. 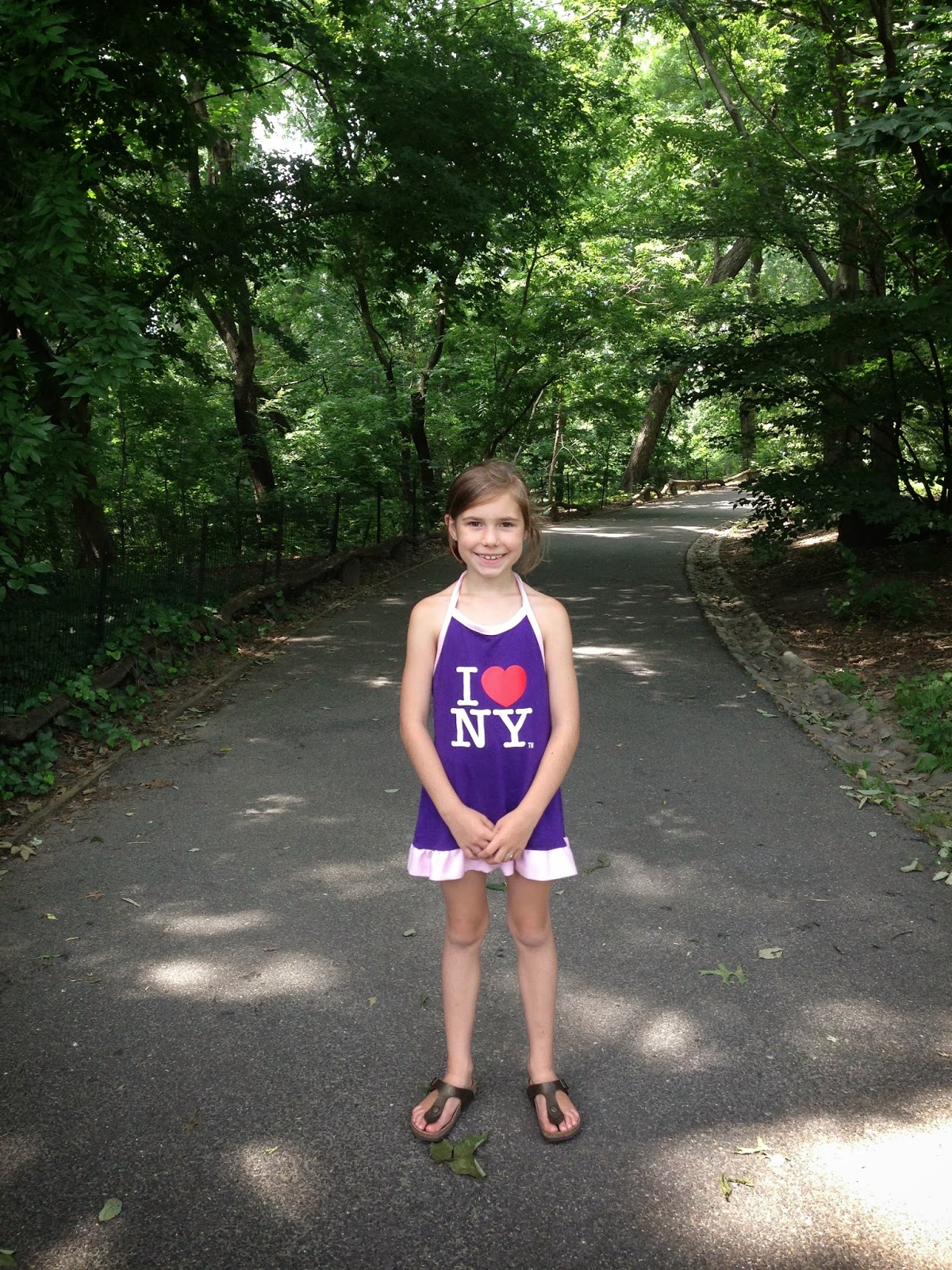 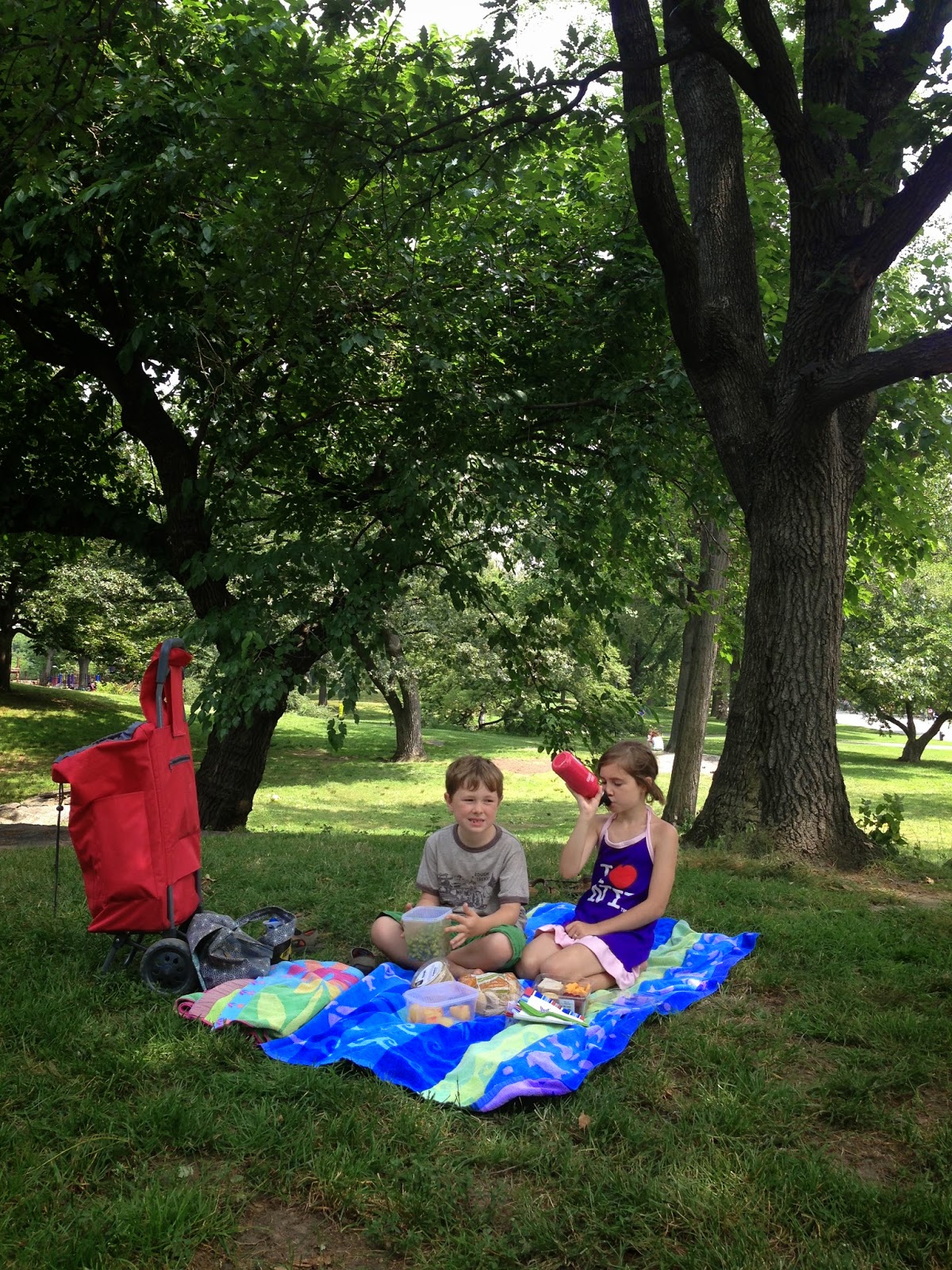 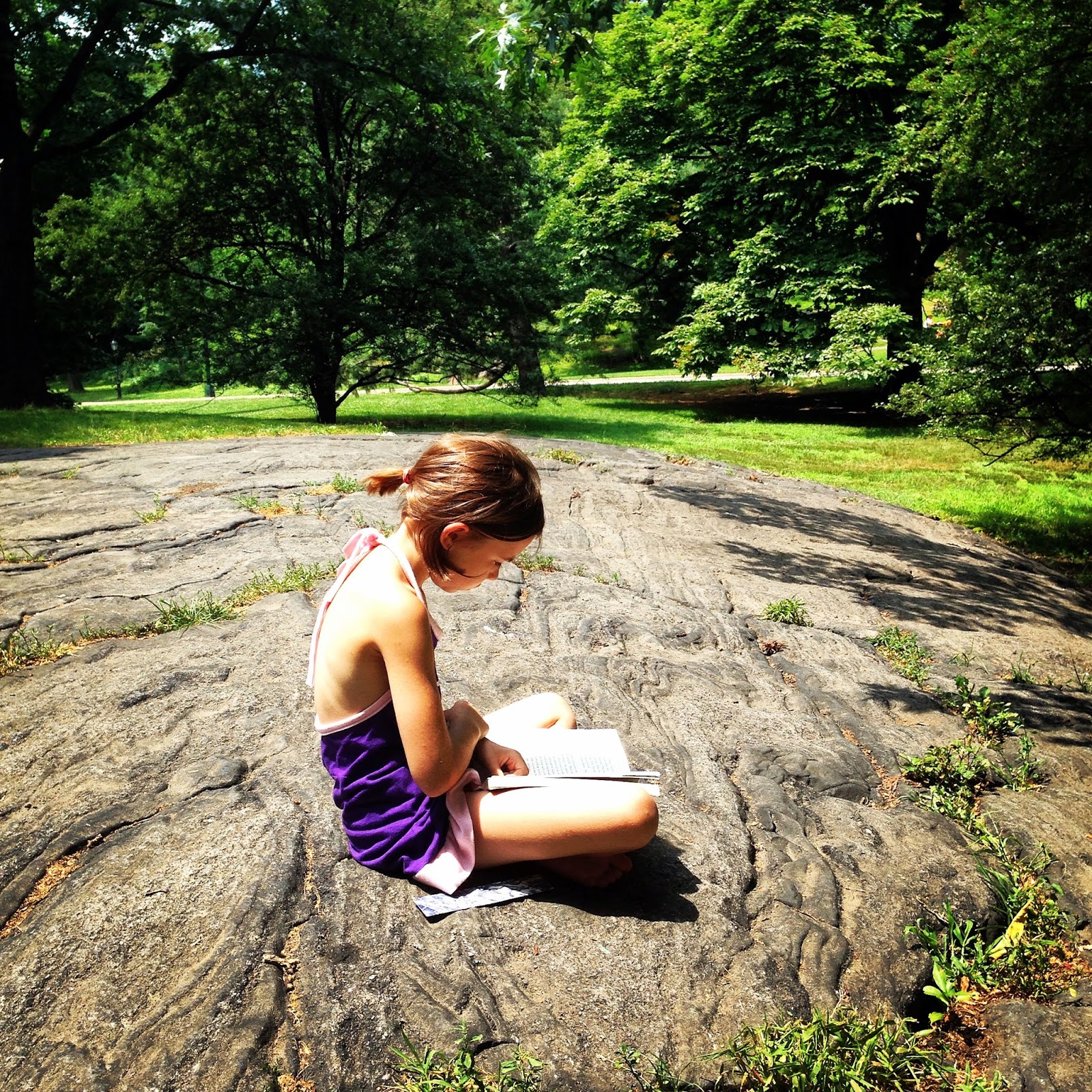 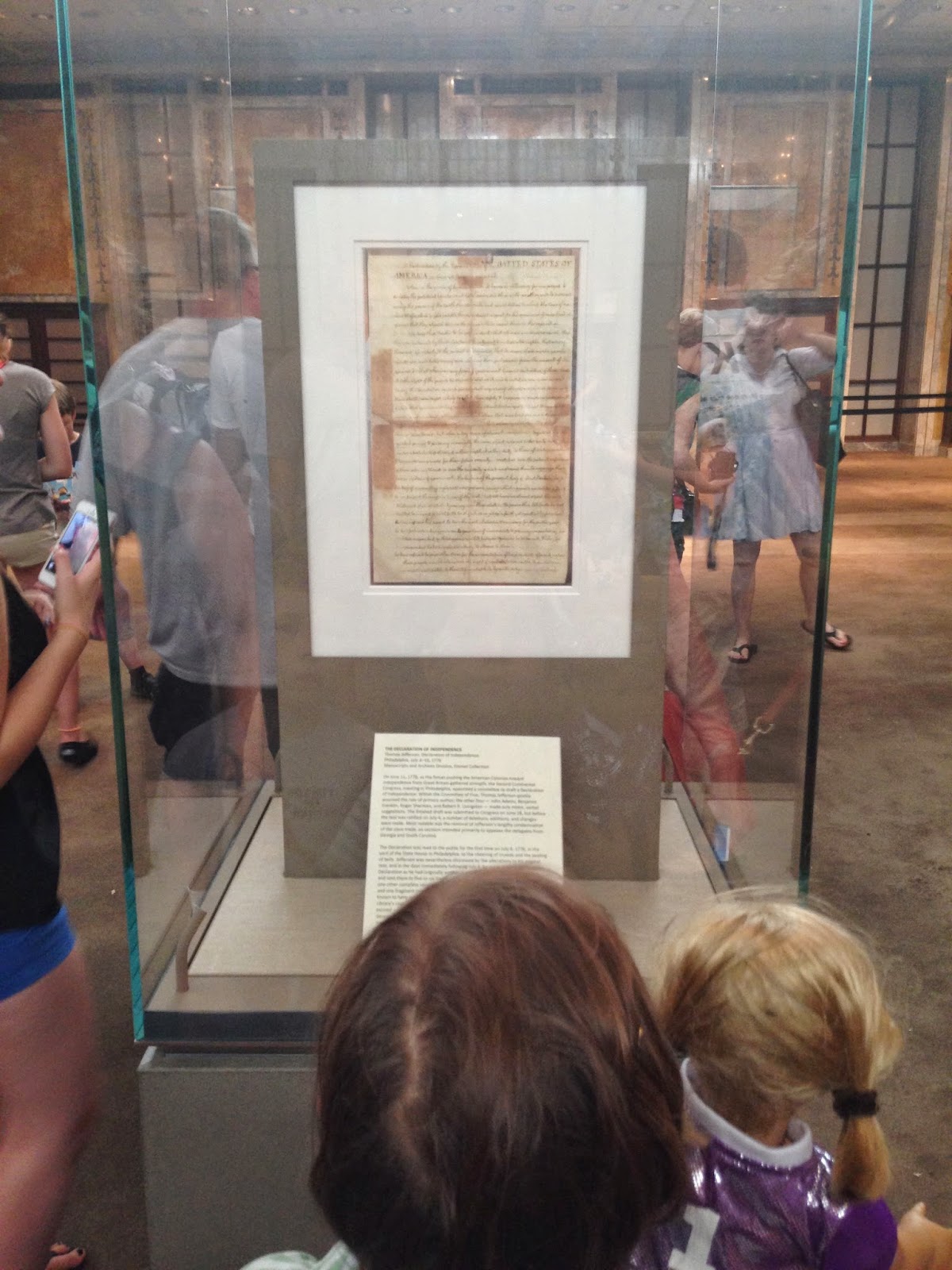 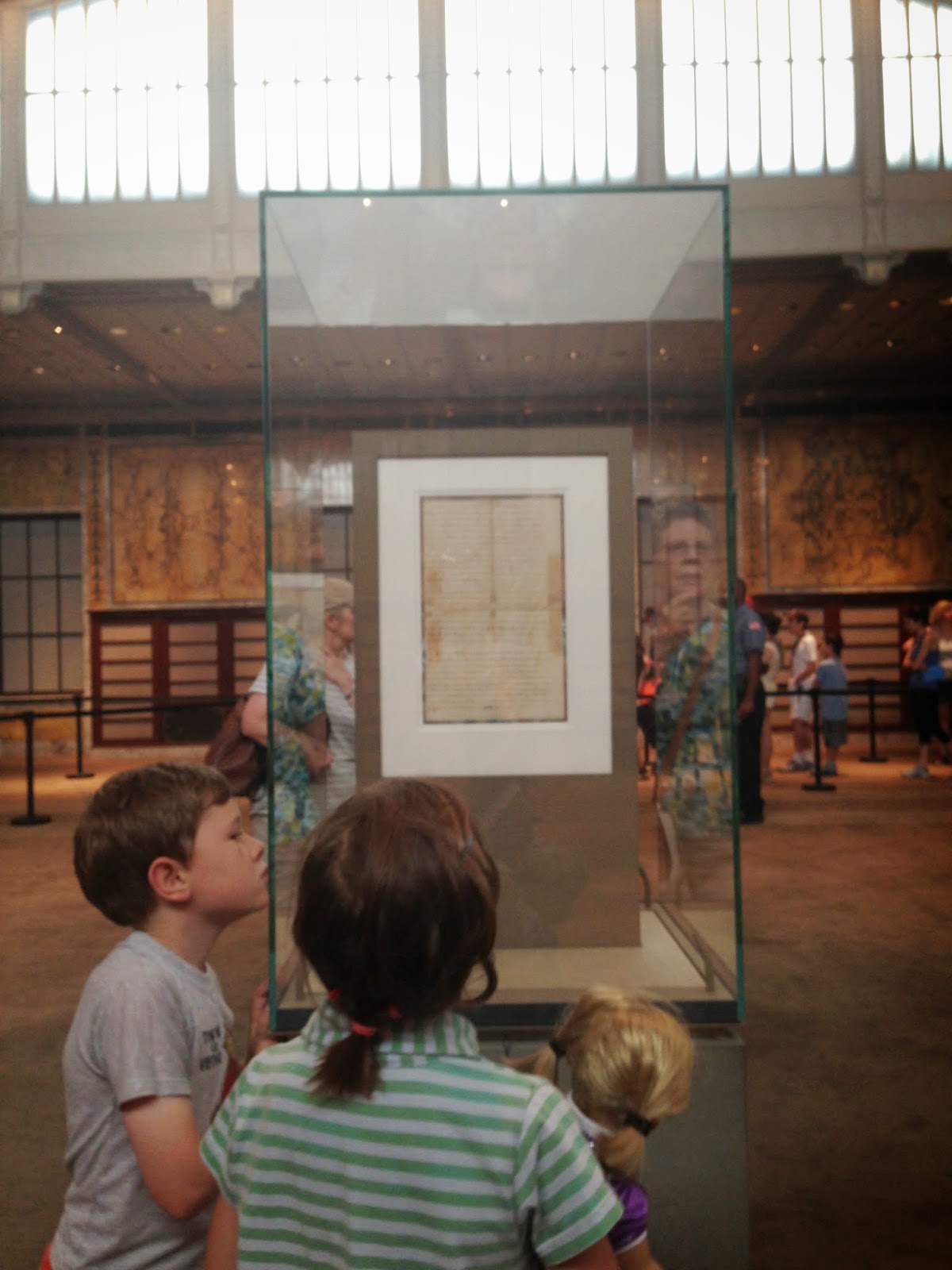 The library is located in Bryant Park in midtown.  We wandered around the park, rode the carousel and discovered that Tuesday was game day in Bryant Park.  There's a big cart of board games that you can choose from and take a seat and play, all for free.  After Kevin returned to work, the kids and I spent some time playing several rounds of UNO. 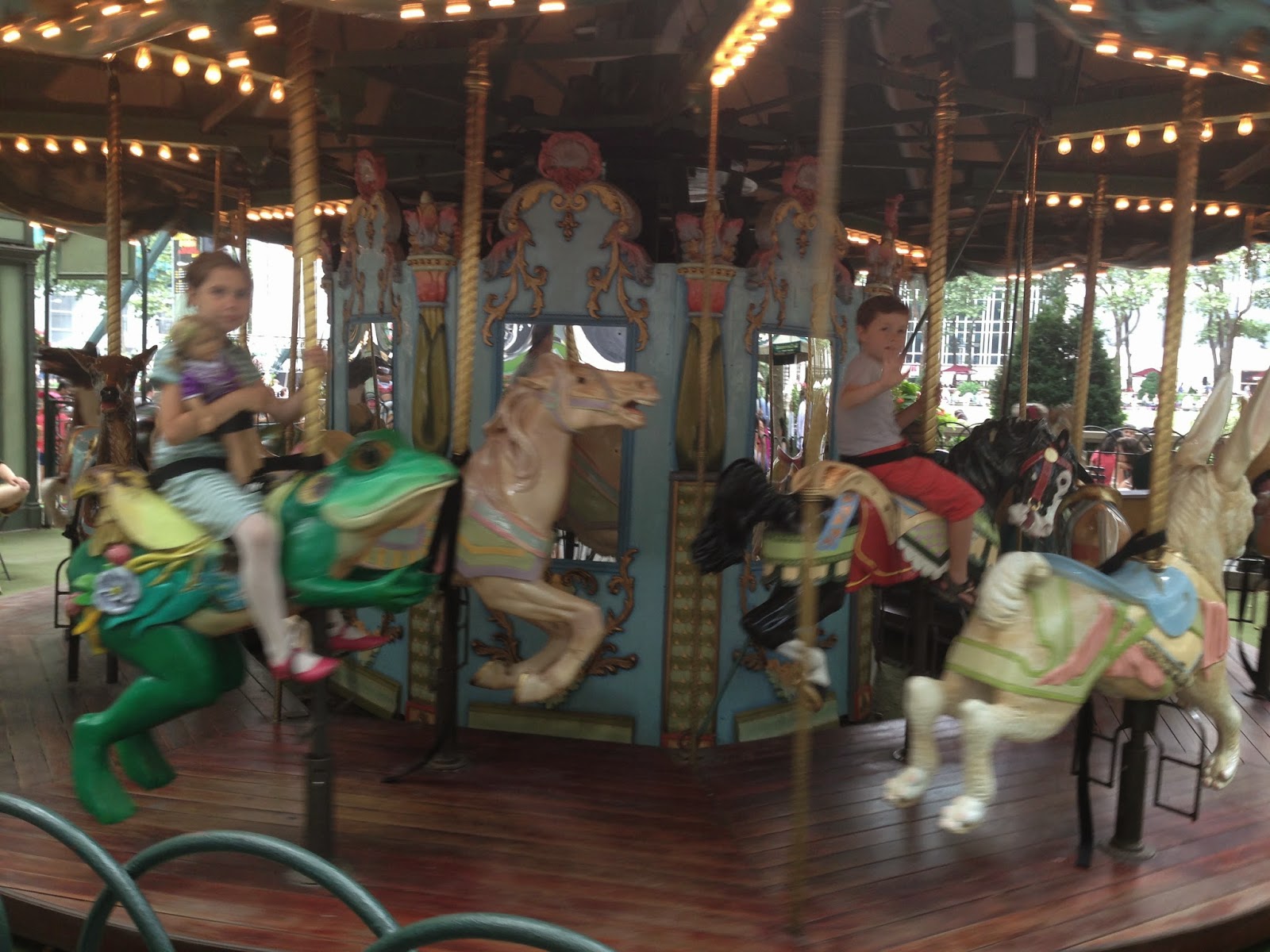 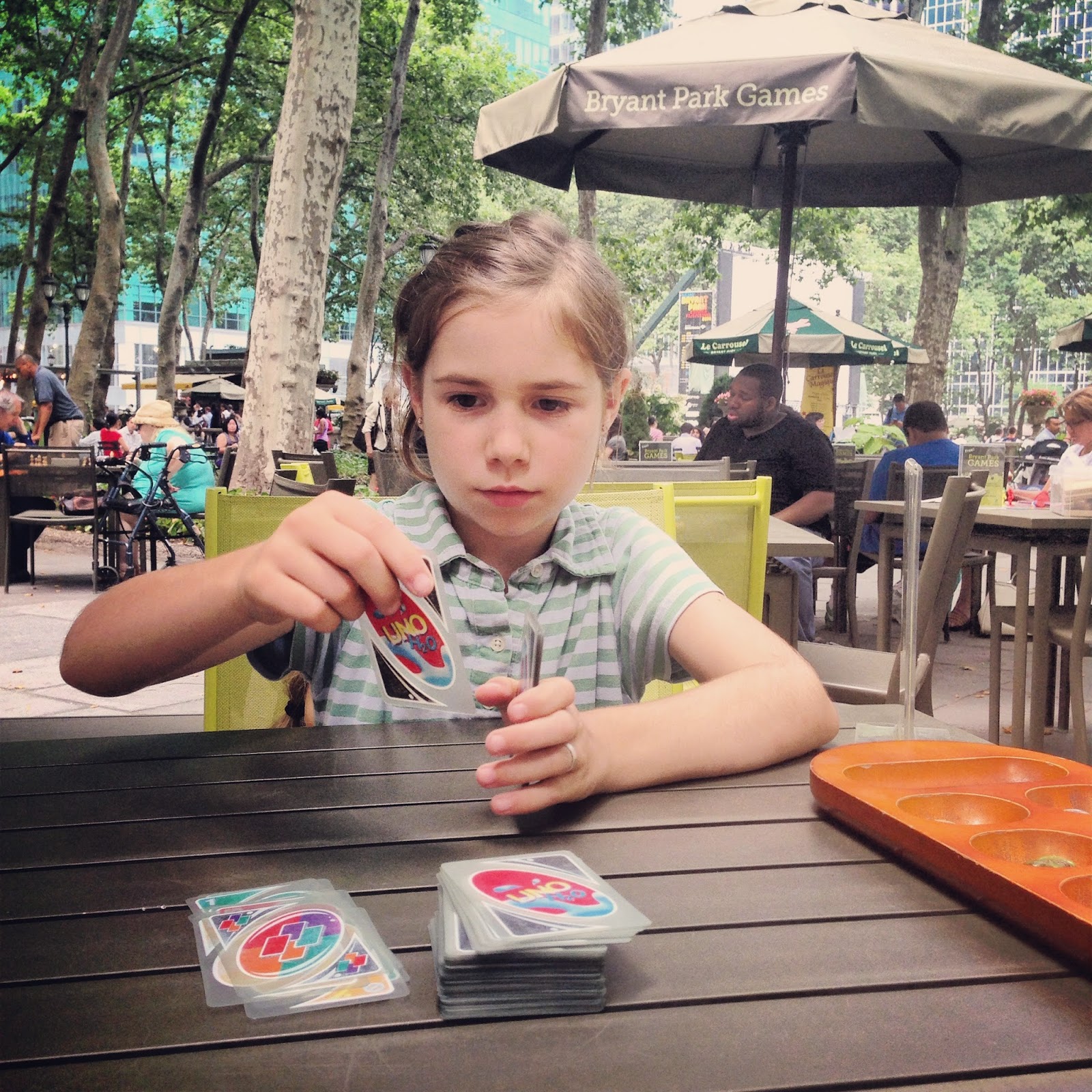 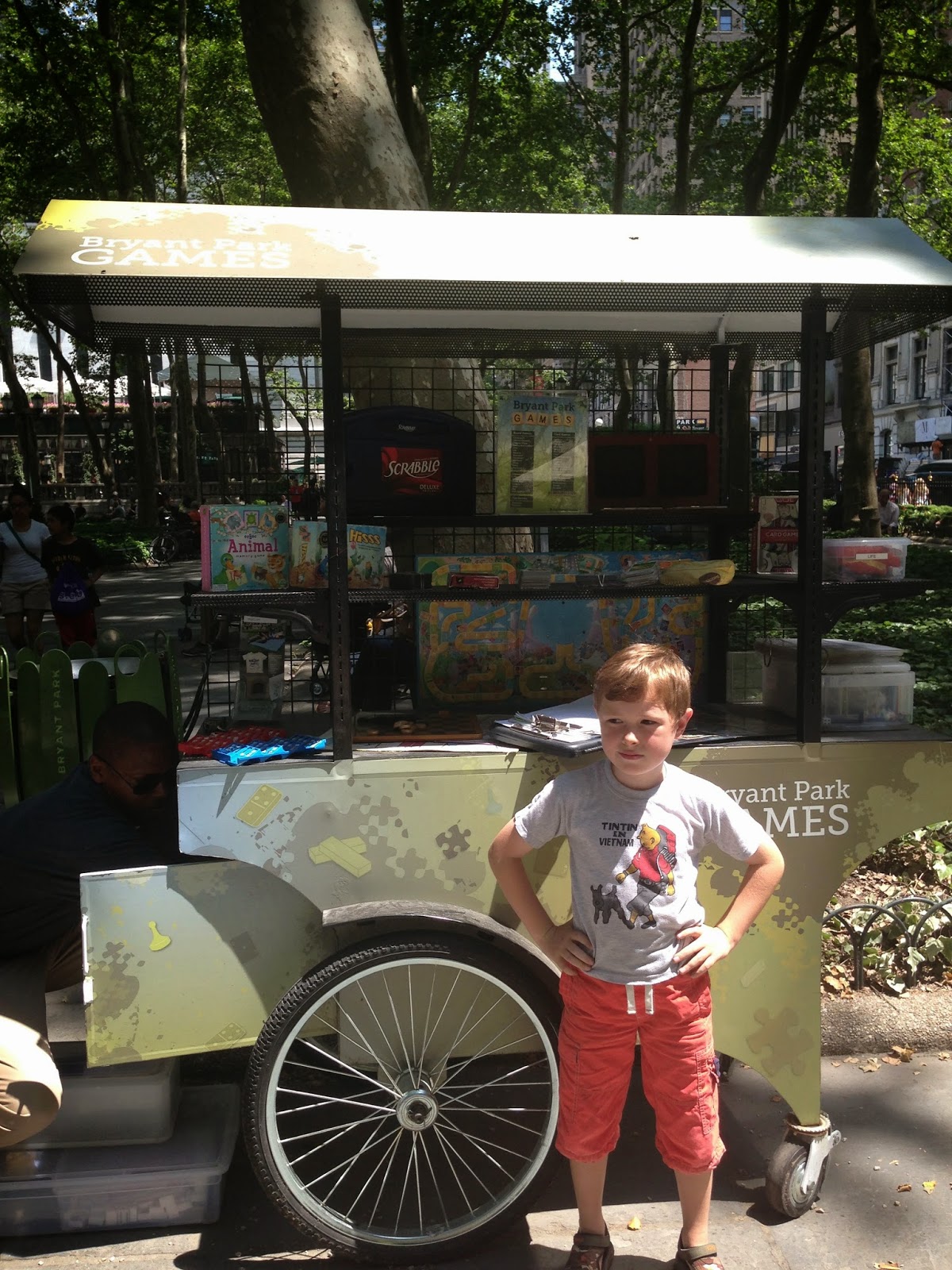 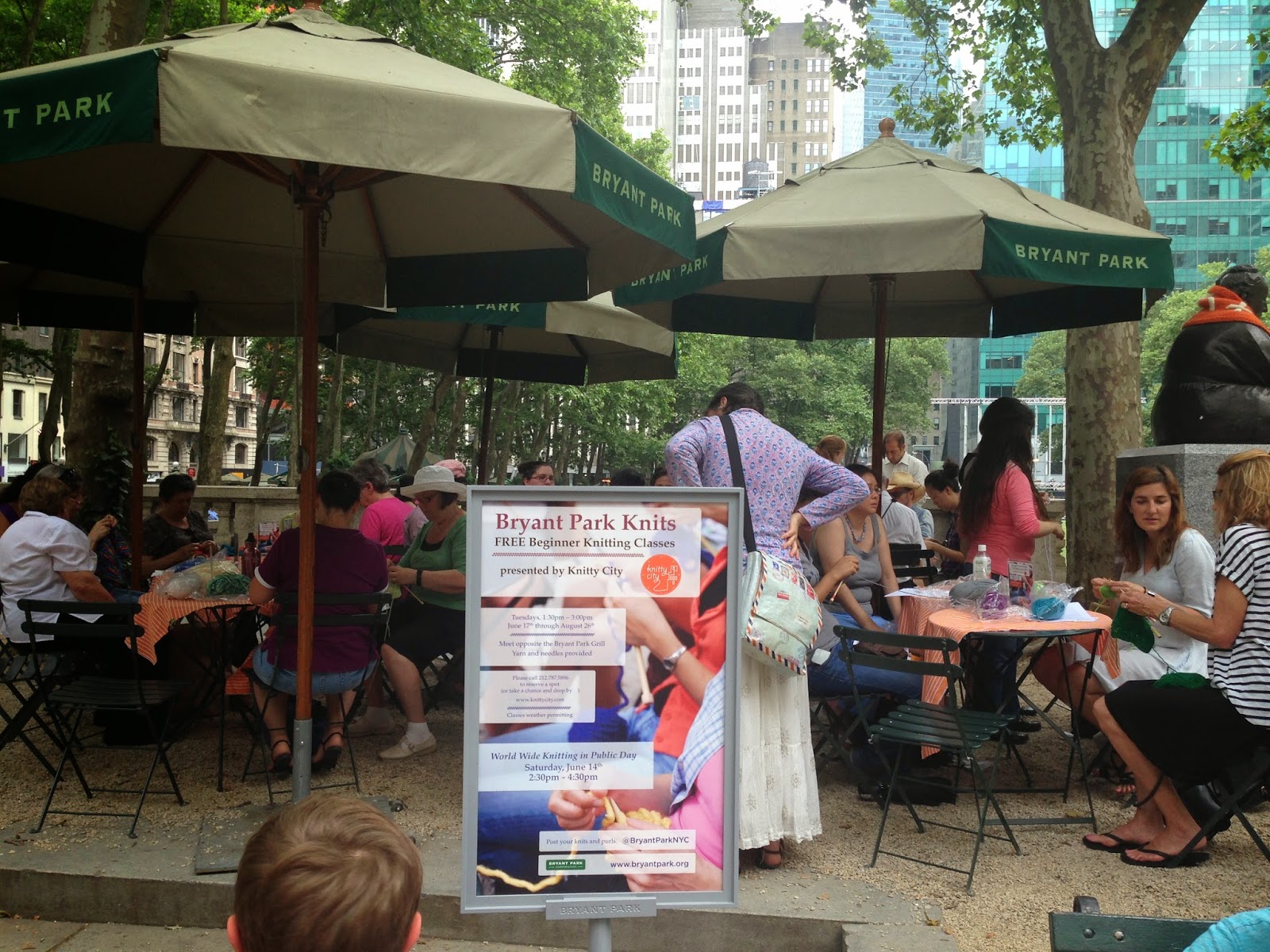 They even had free knitting classes going on.  Apparently they happen every Tuesday throughout the summer so don't worry Jay, we'll try to get back for one of those!

The next day was really when the wall of humidity hit.  So we found ourselves once again in Central Park, hundreds of water balloons in pocket, ready to be filled and catapulted.  We met their friend Luke at a playground and cooled off. 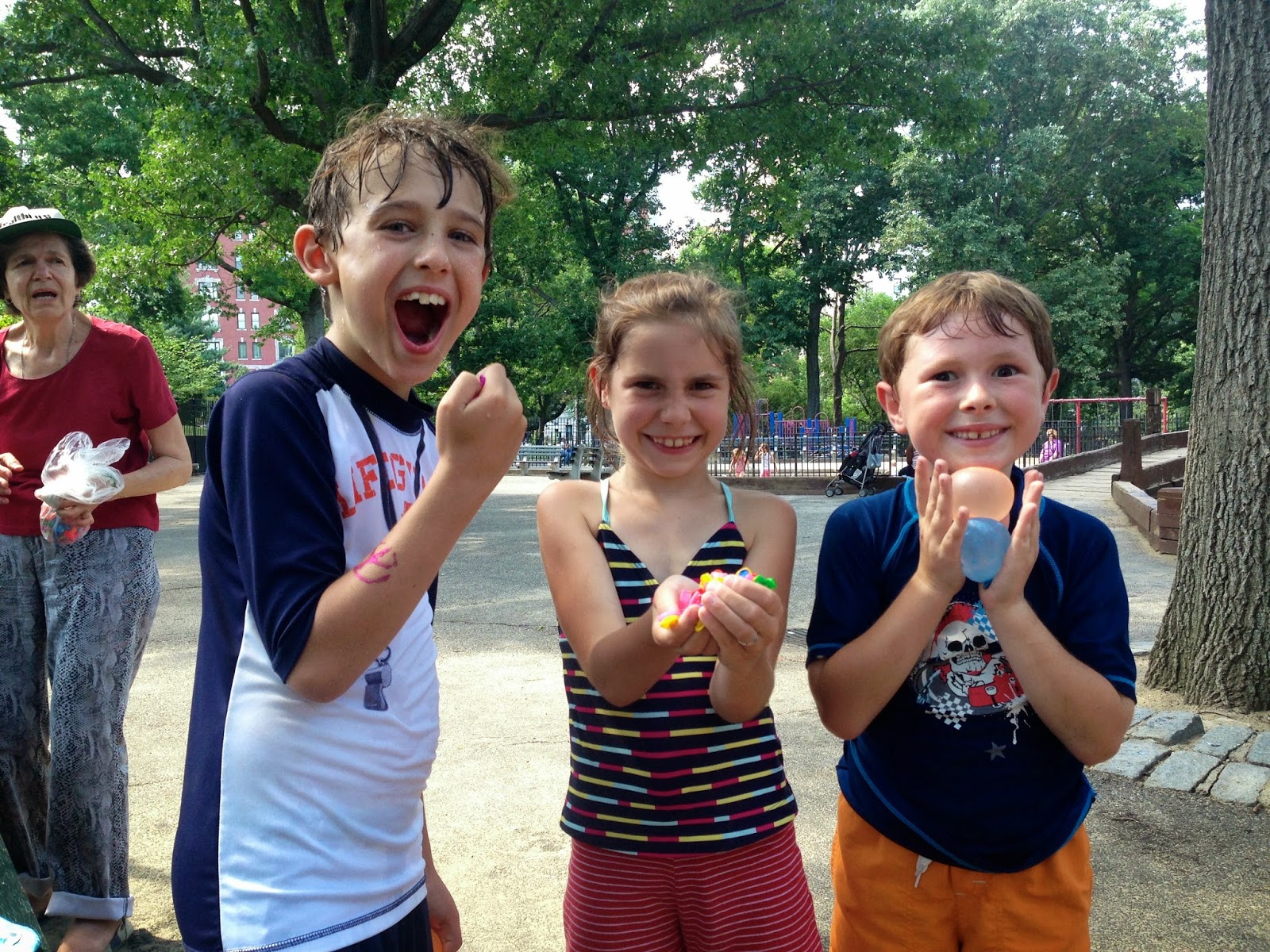 Late in the day I had a doctor's appointment not far from Kevin's office so we met up with him after work.  We wandered past the United Nations buildings and vowed to return for a tour soon.  Thunder and lightening started to strike so we ran for Grand Central Station.  It turns out Kevin had an ulterior motive for getting us there.  Ella has been begging to try raw oysters lately (remember her sour face in Mystic?).  The Grand Central Oyster Bar is world famous and as good a place as any to lose your oyster virginity.  It opened along with the terminal 101 years ago and has been in business ever since. 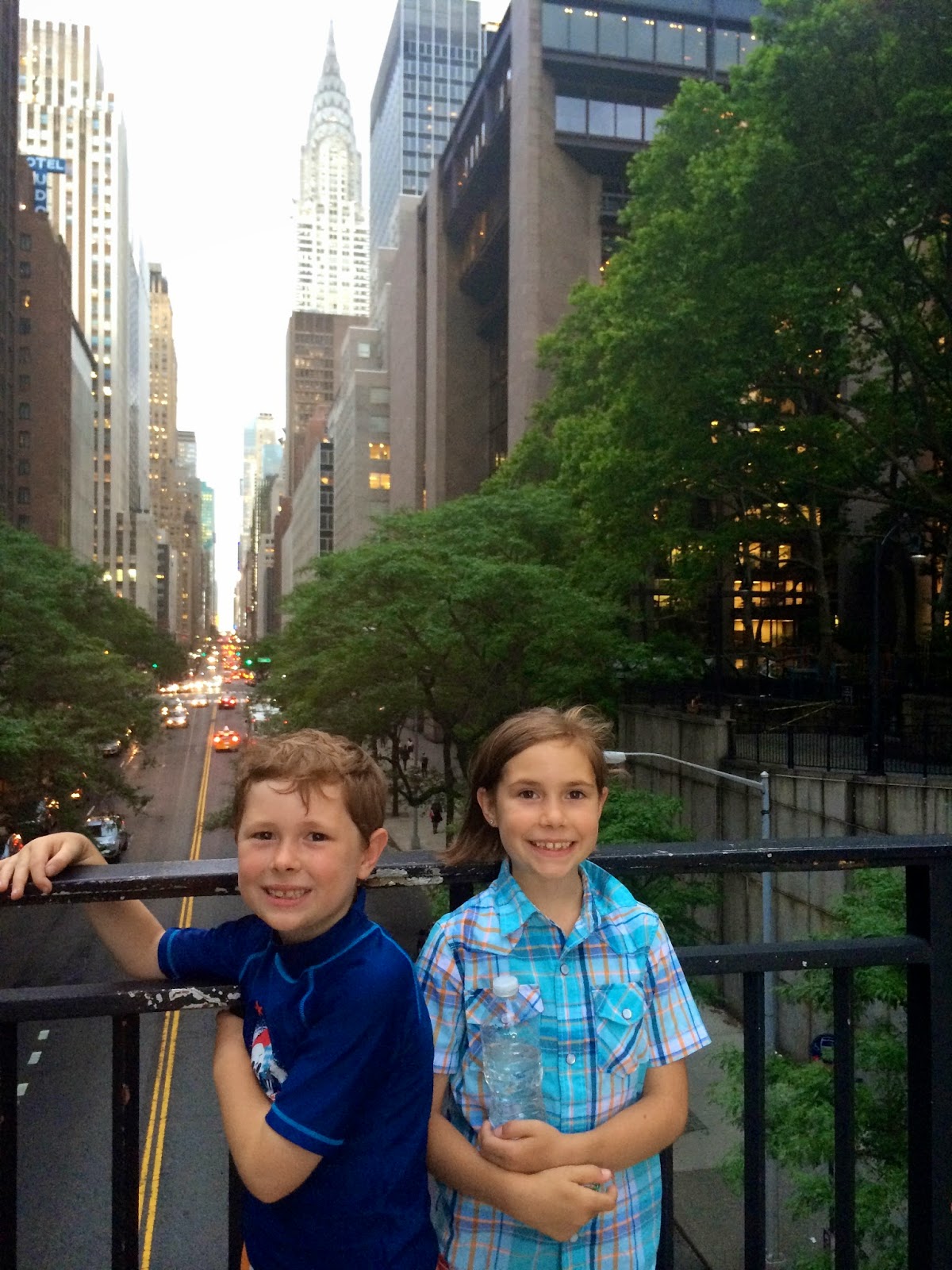 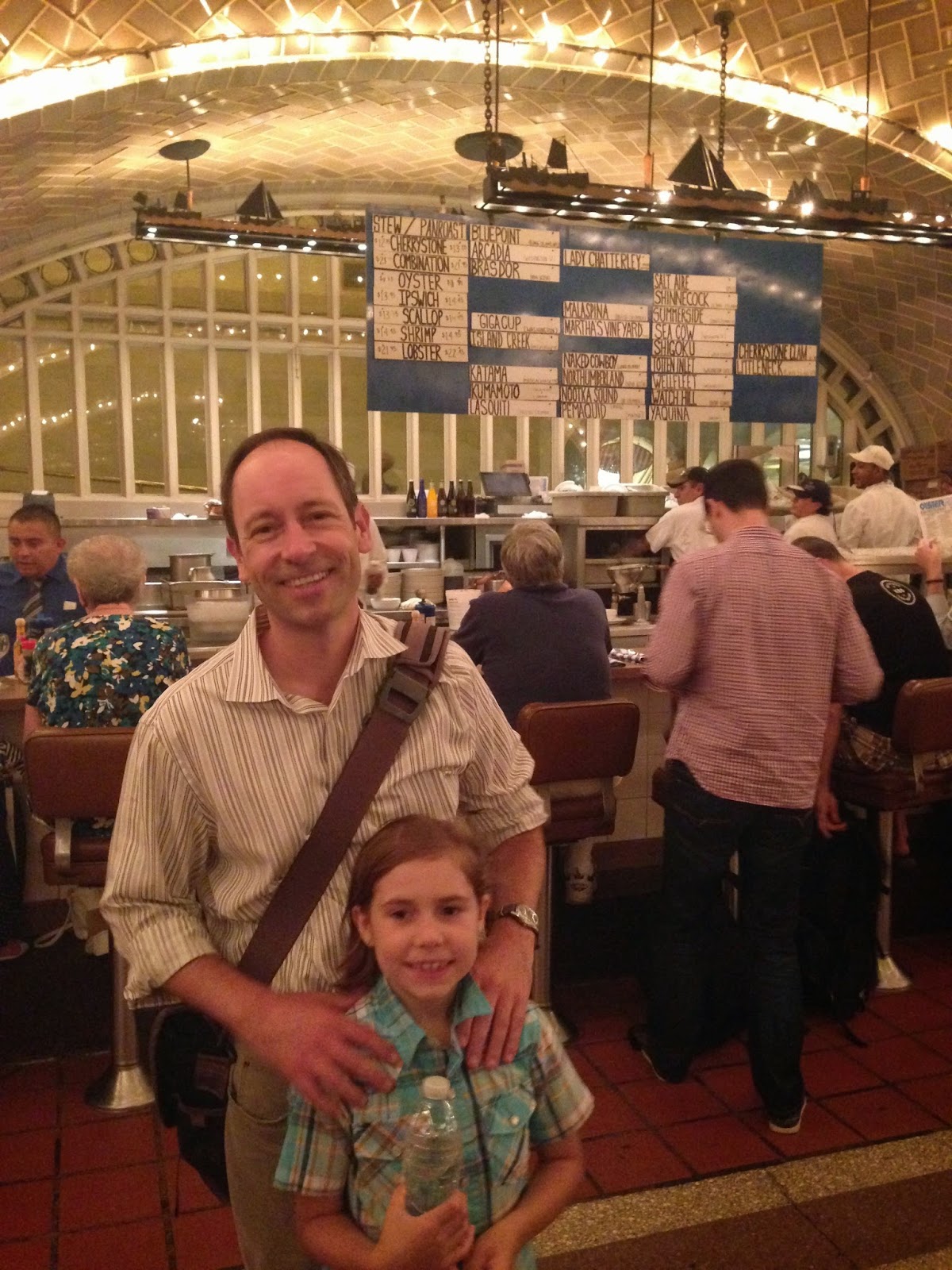 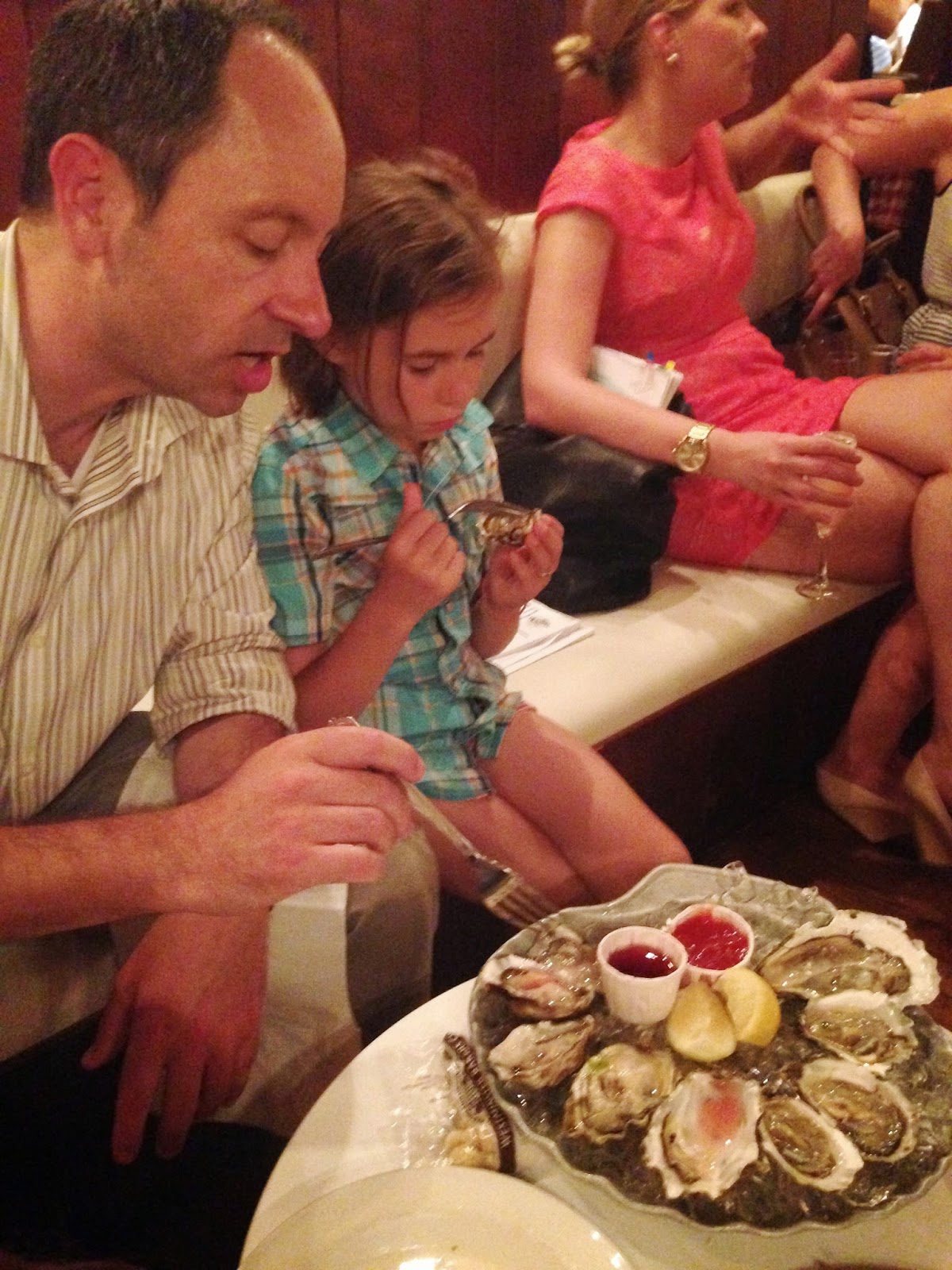 Much to my complete shock, she gave them two thumbs up.


We wrapped up the week swimming in the suburbs again.  This time we went to Hastings-on-Hudson, a cute little town just 15 miles north of the city.  Our friends have a summertime membership to the neighborhood pool.  We were threatened with thunder clouds all day but the flash floods held off until we were bundled up at home, watching Mrs. Doubtfire (I forgot what a great movie that is).  That's something I still haven't gotten used to: thunderstorms on a hot day.  Where I come from, if it's raining and thundering, it's cold out.  It never rains when it's hot. 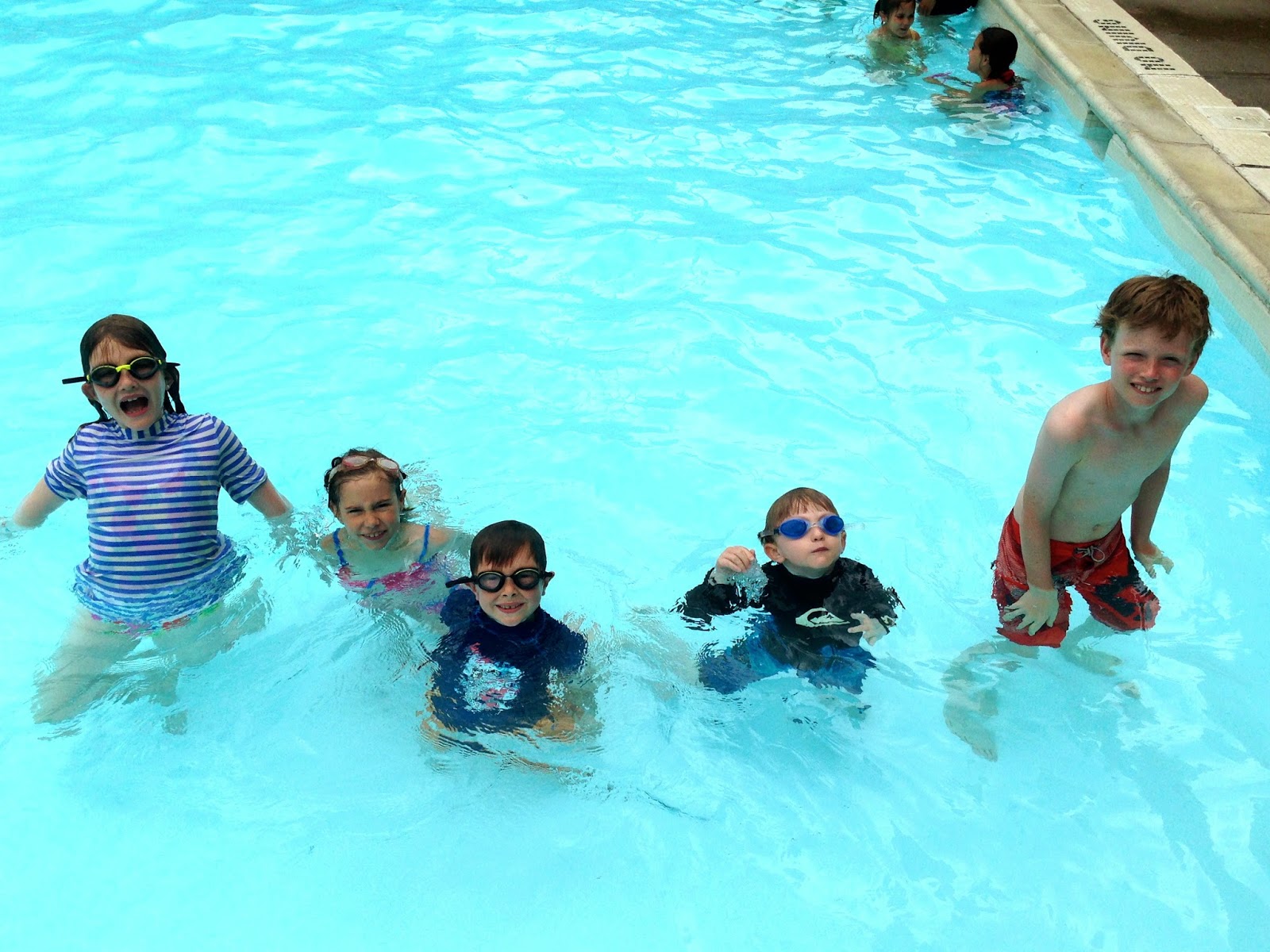 I will try to post again before the kids and I leave for Costa Rica on Sunday morning (Kevin will join us ten days later).  But considering I haven't even packed yet for any of us, I make no promises.  I do plan to blog while we're there though, although possibly on a less frequent basis.

After all, I'll need to tell you all about how Holden turned seven years old!