[Finally posting this 3 days after I wrote it. I'm also posting it from Costa Rica on a computer I'm unfamiliar with, using shotty internet service, so please excuse the strange font and any other problems you may see.]

I’m sitting on the airplane on my way to Costa Rica and realize that I never got up a post about our Fourth of July and Holden’s birthday celebrations.


Independence Day was rainy and cloudy all day here in New York.  The city is completely empty (relatively speaking) and it sure didn’t feel like any Fourth of July I’ve ever experienced.  At one point I told Kevin that this should be our last Fourth in the city.  The holiday is supposed to be one spent outside, barbequing, swimming.  Not wandering around a city under umbrellas wondering if we’re going to be able to see any fireworks.


We spent a big chunk of the day inside at the New York Historical Society.  It was opening day of a new exhibit of original paintings and drawings from the Madeline books written and illustrated by Ludwig Bemelmans.  He lived and worked in the city which is why it was being shown at the NY Historical Society.  We all really enjoyed it and it always makes it more fun for the kids (little and big) to get an audio guide with it, explaining what we’re seeing and why we’re seeing it.

Unfortunately, I cleared out my phone of all photos before leaving on our trip to make room for more, so if you want to see a cute photo of Ella at the exhibit, you'll have to go to the trouble of clicking here.  Sorry about that.


After the exhibit we did a scavenger hunt that the museum has for kids that takes you around all four floors, seeking out clues.  It was a special kids scavenger hunt just for Independence Day so again, it made the visit a lot more fun.  We learned a lot about George Washington, how he was inaugurated in New York City which served briefly as the capital of the United States, and even got to see several chairs that he sat in.


Even though I knew the chance of our seeing fireworks in such yucky weather was low, I agreed to head downtown near where the fireworks would be set off over the Brooklyn Bridge.  We continued the George Washington theme by eating dinner at Fraunces Tavern. After British troops evacuated New York in 1783, George Washington bade farewell to his officers in the Long Room of this building. It is just down the street from Federal Hall where he was sworn in as President.

We struck up a conversation with a woman and her son sitting next to us.  It turned out that it was her son Dylan's birthday and they had decided last minute to take the train down from Greenwich, Connecticut to see the fireworks.  He and Holden hit it off and they ended up inviting us to join them in trying to get close to the edge of the river using their hotel room key, as their hotel was near the water but within the restricted areas to pedestrians.  There were barricades and police all over the place but we were able to get past several barricades and police lines by just flashing her room card.


I still don’t know how it happened, but somehow we went from assuming we wouldn’t see any fireworks at all and were resigned to trying to see them on the bar television set, to getting a second row seat on the edge of the river, directly across from the three barges that were launching the fireworks.  And to top it off, the sky cleared up as if by magic and turned an amazing shade of blue.  I have no doubt that we had the absolute best seats in the entire city. 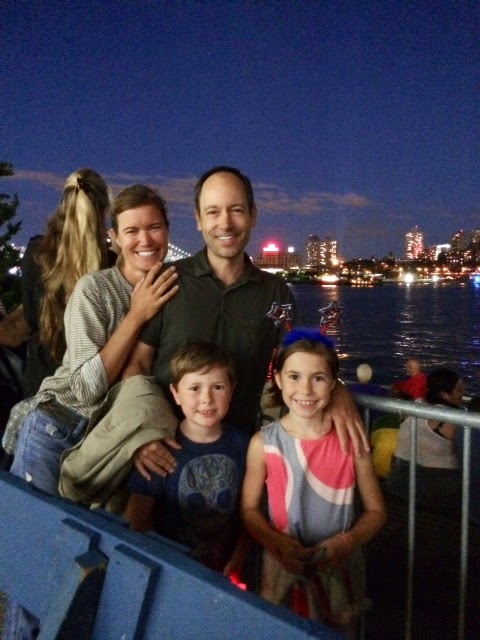 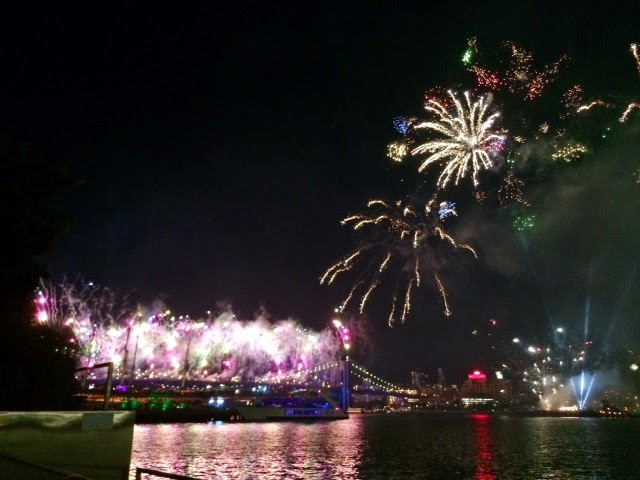 The next morning we woke much too early to Holden racing upstairs and jumping in our bed, so excited to finally be seven.  He tore through all of his gifts as though it were Christmas morning.  We got ourselves ready, picked up our Zipcar and made our way through the Lincoln Tunnel and over to Secaucus, New Jersey, home of Field Station.  Field Station is kind of like a zoo for dinosaurs.  They have dozens of robot-like dinoaurs, fun shows to learn about what dinosaurs ate, how they lived, theories about how they died. 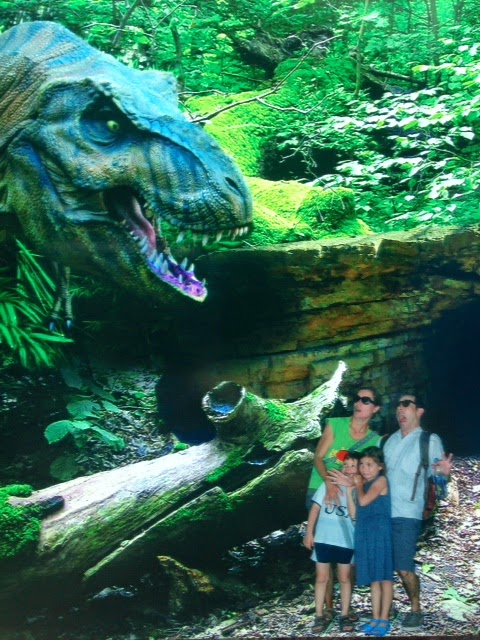 We spent the rest of the afternoon watching Costa Rica play The Netherlands in what will hopefully be the last World Cup game I see for a long time.  We found our favorite sports bar in the Columbia University area and watched the heartbreaking loss in the very last kick of the game  It would have been oh so fun to arrive in Costa Rica on the heels of a victory.


Over nachos and french fries Ella asked, “Why do we always eat in taverns?”

Time for this World Cup to end.
Posted by Gretchen at 10:17 PM