From Shakespeare to the Sea

You must think we've fallen off the face of the Earth.  No midweek post last week and now I'm late for my Monday morning post.

Honestly, last week was pretty dull - nothing to write home about.  Ella's class took a mini field trip down to the corner of their block with a volunteer from an organization called Landmark West.  The kids were supposed to take in the local flavor - buildings, sounds, environment - and be inspired to write poetry about it. 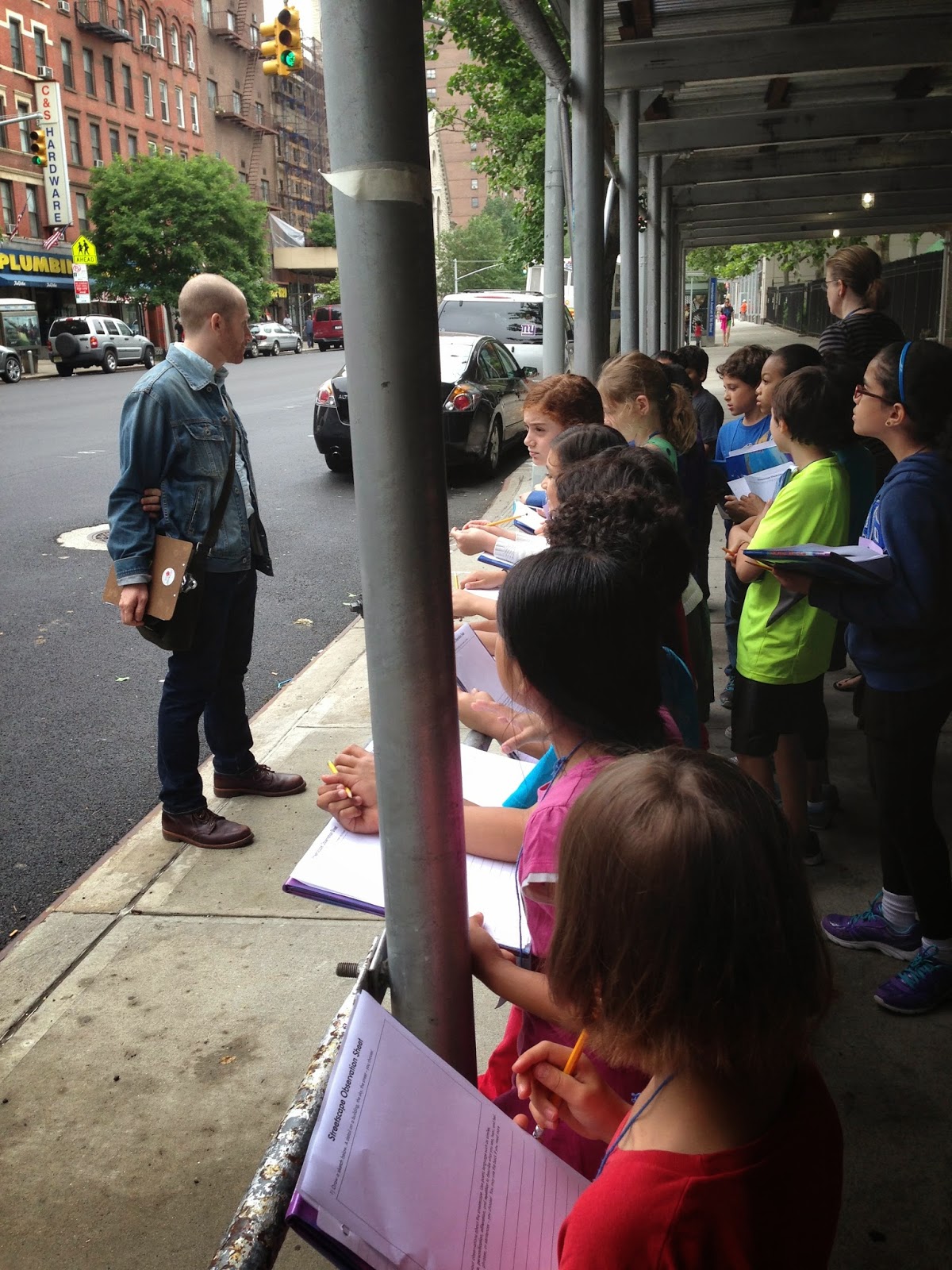 It was a drizzly day, we were standing under scaffolding, we couldn't hear the leader over the sounds of sirens and horns.  I don't see how anyone would feel inspired to write poetry under those circumstances.  It was truly an urban field trip.

I was also able to help in Holden's class last week with making Father's Day gifts. 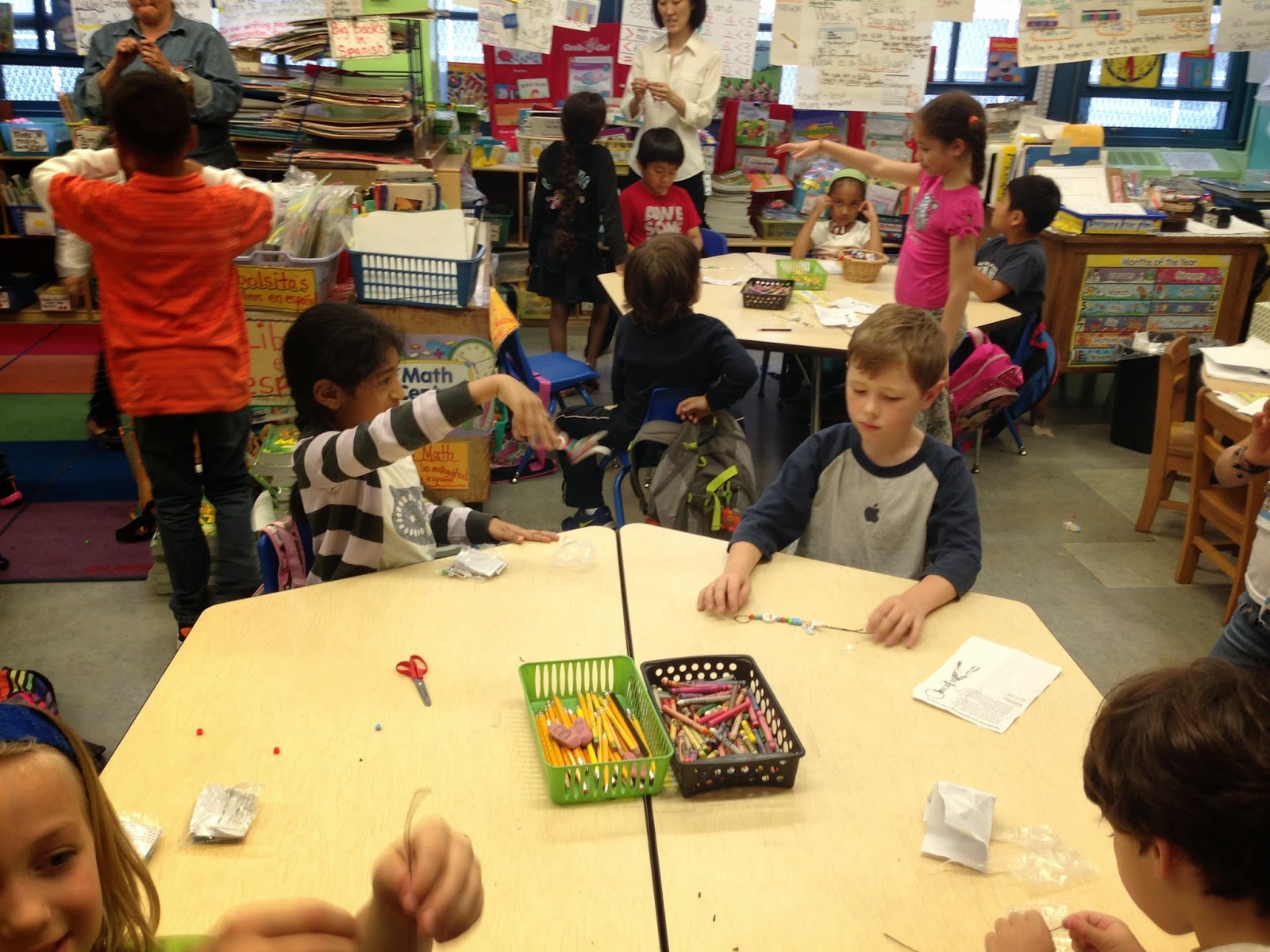 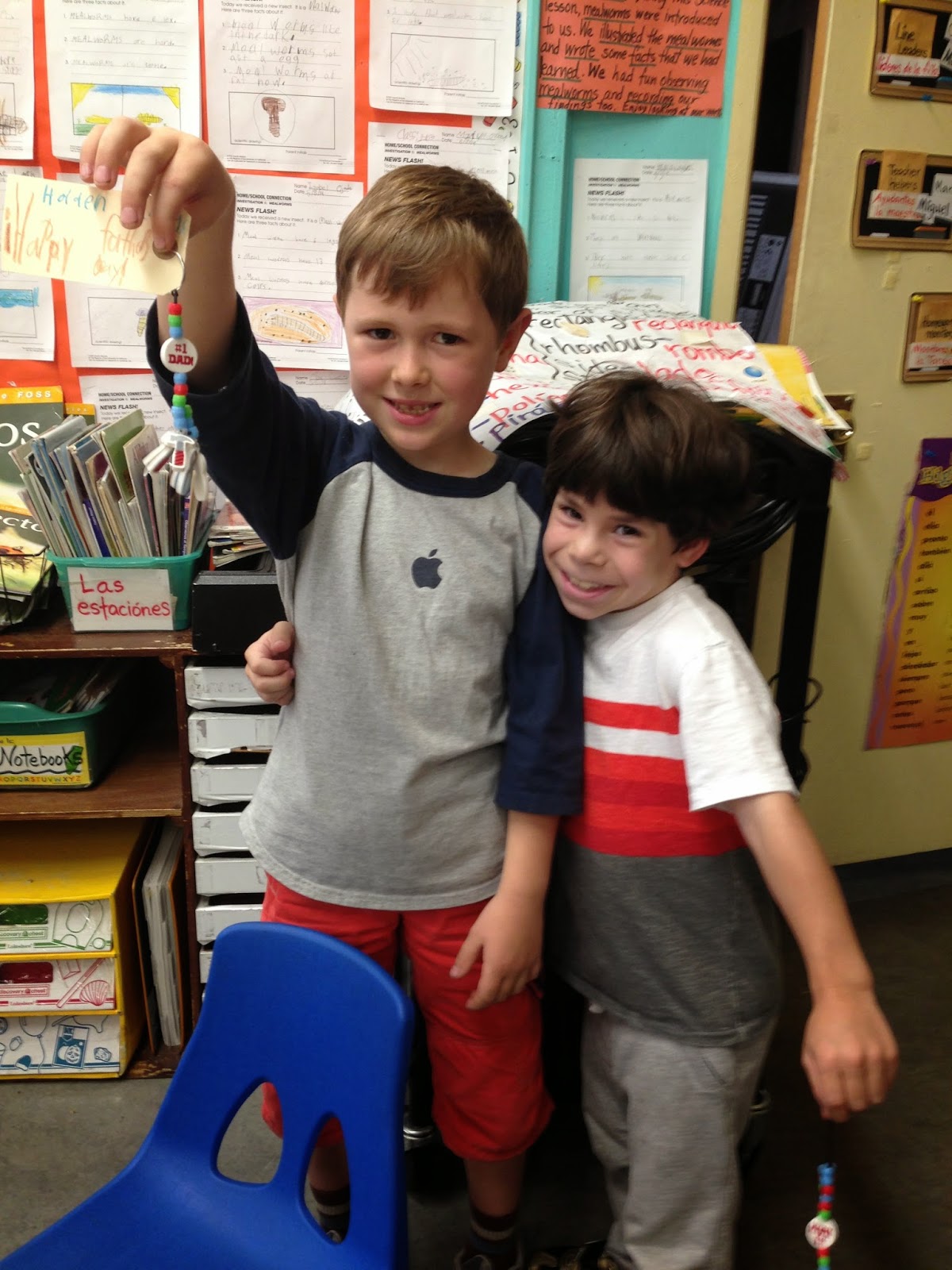 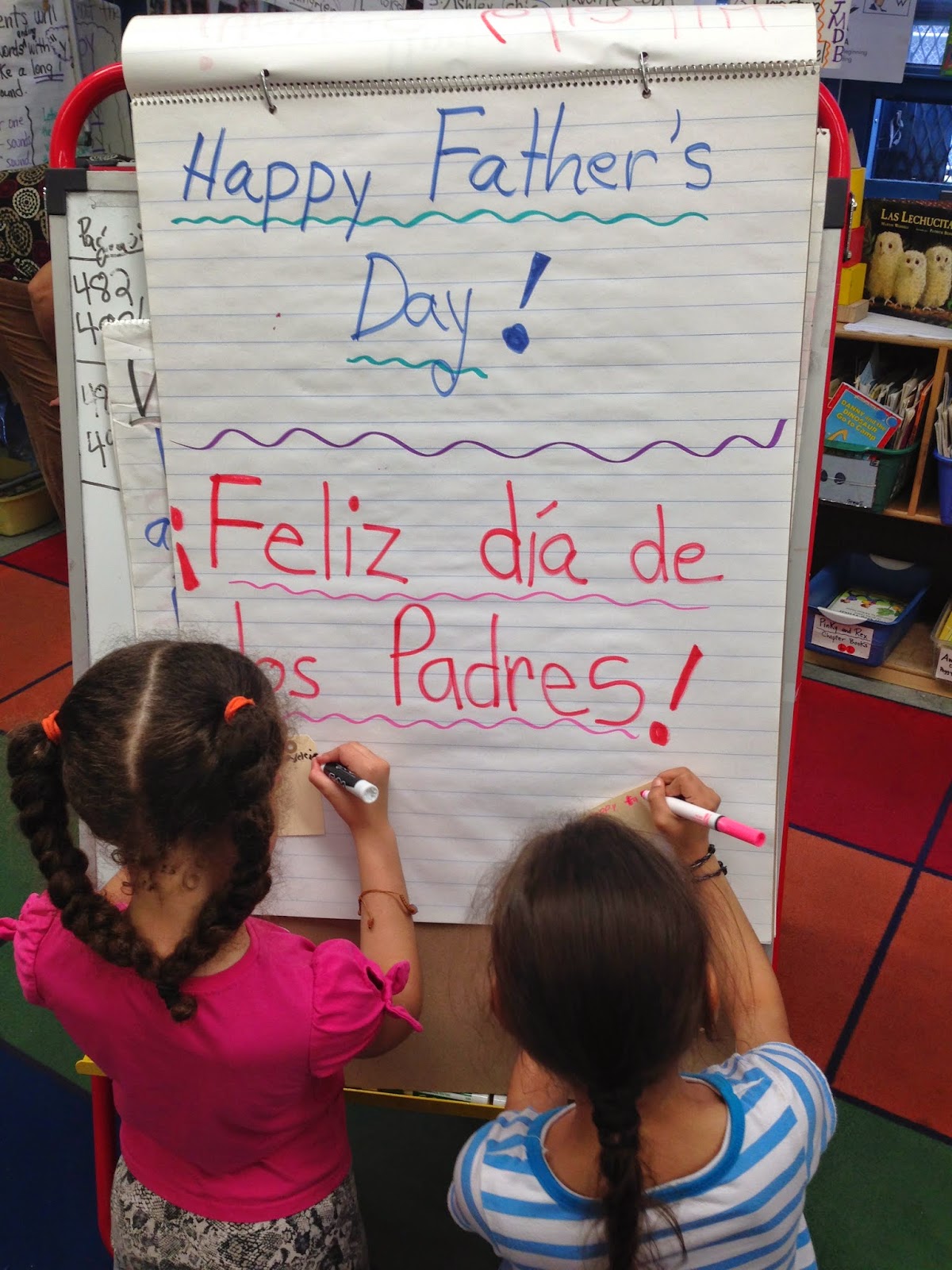 And the kids had their last Scratch class - the computer class where they learned how to create and program their own video games.  The parents got to come on the last class and try out each student's game.  My kids just fell in love with Scratch and will continue doing it on their own over the summer online. 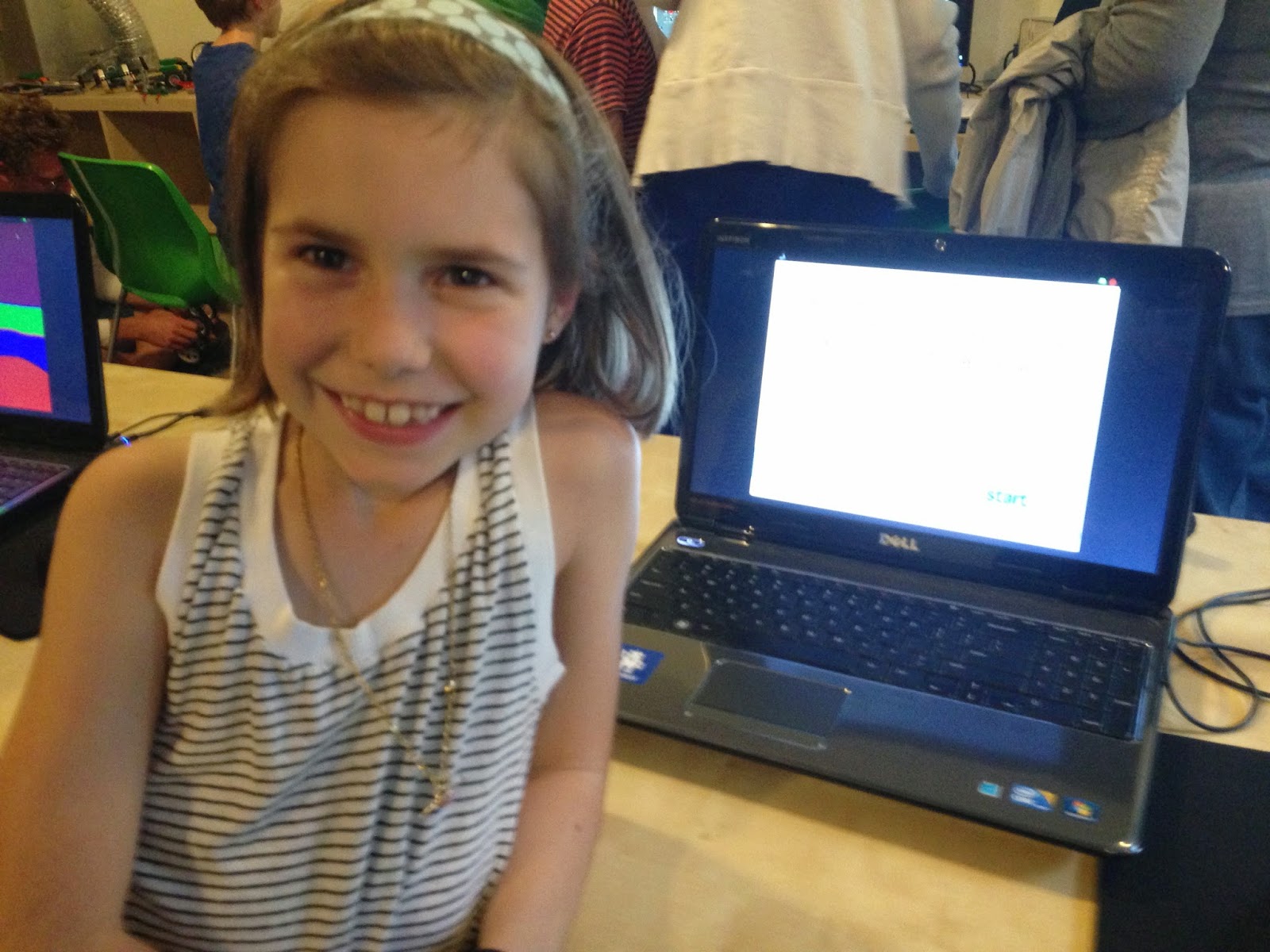 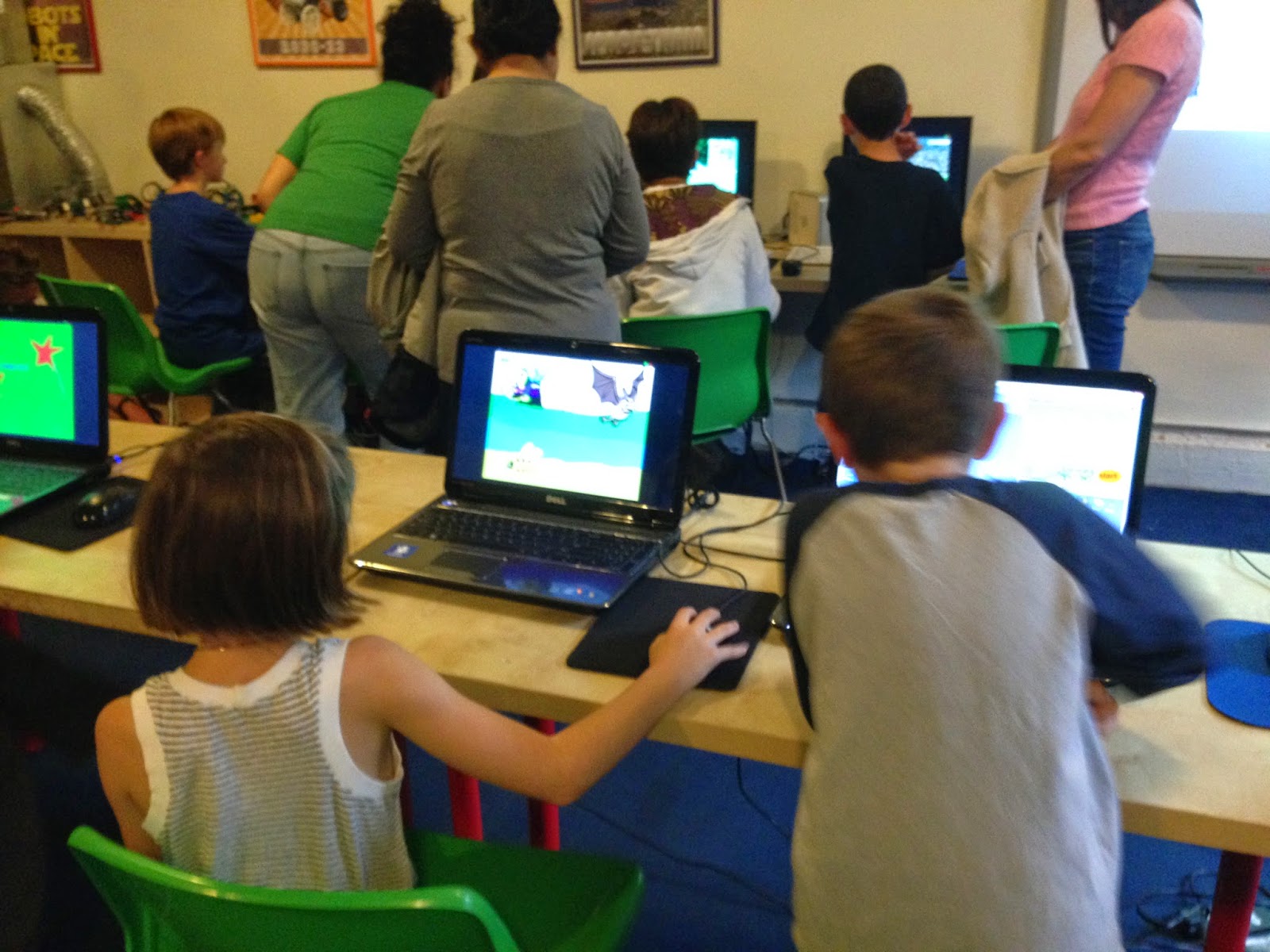 But our weekend...oh boy, was it a good one!

Saturday morning I met my friend Alina and some other moms in Brooklyn to participate in the Moms Demand Action for Gun Sense in America march.  Their name says it all.  I walked with a couple thousand moms across the Brooklyn Bridge and then participated in a rally to bring attention to the problem of guns in America. 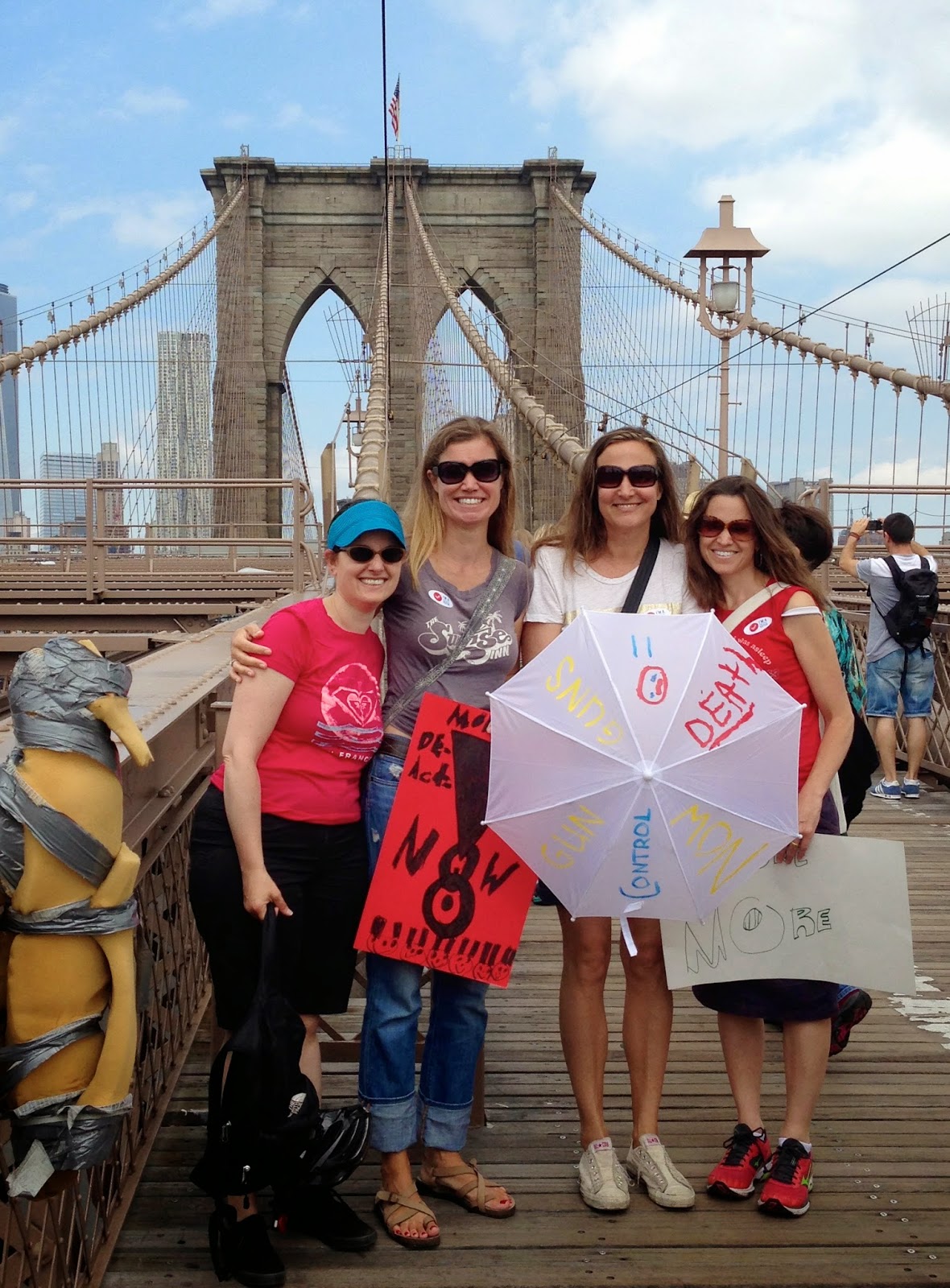 It was a beautiful day to walk across the bridge and the rally at the end was very emotional.  They had speakers such as the daughter of the principal who was killed at Sandy Hook Elementary School, the mother of the African American boy in Florida who was shot and killed just for playing his music too loud (his white killer was acquitted), a man who was shot in Brooklyn and was saved by another man who had previously been shot and who has since been killed by a gun.  Heartbreaking stories of loss.  It was enough to drive us to find an Irish pub and a pint of beer after. 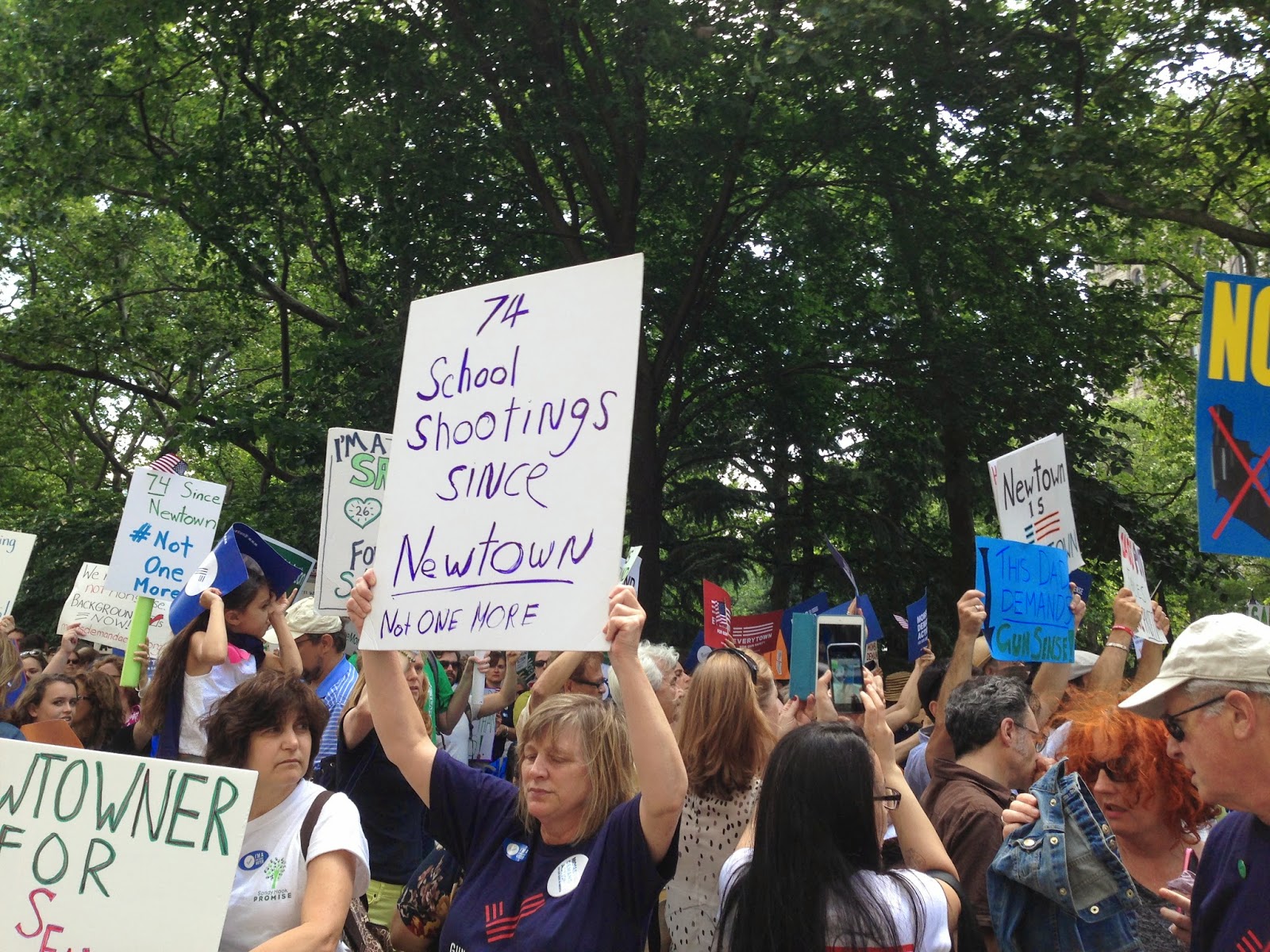 Meanwhile, the kids were a little more upbeat in Central Park and discovered a woman making giant bubbles.  Apparently, it kept their attention for quite a while. 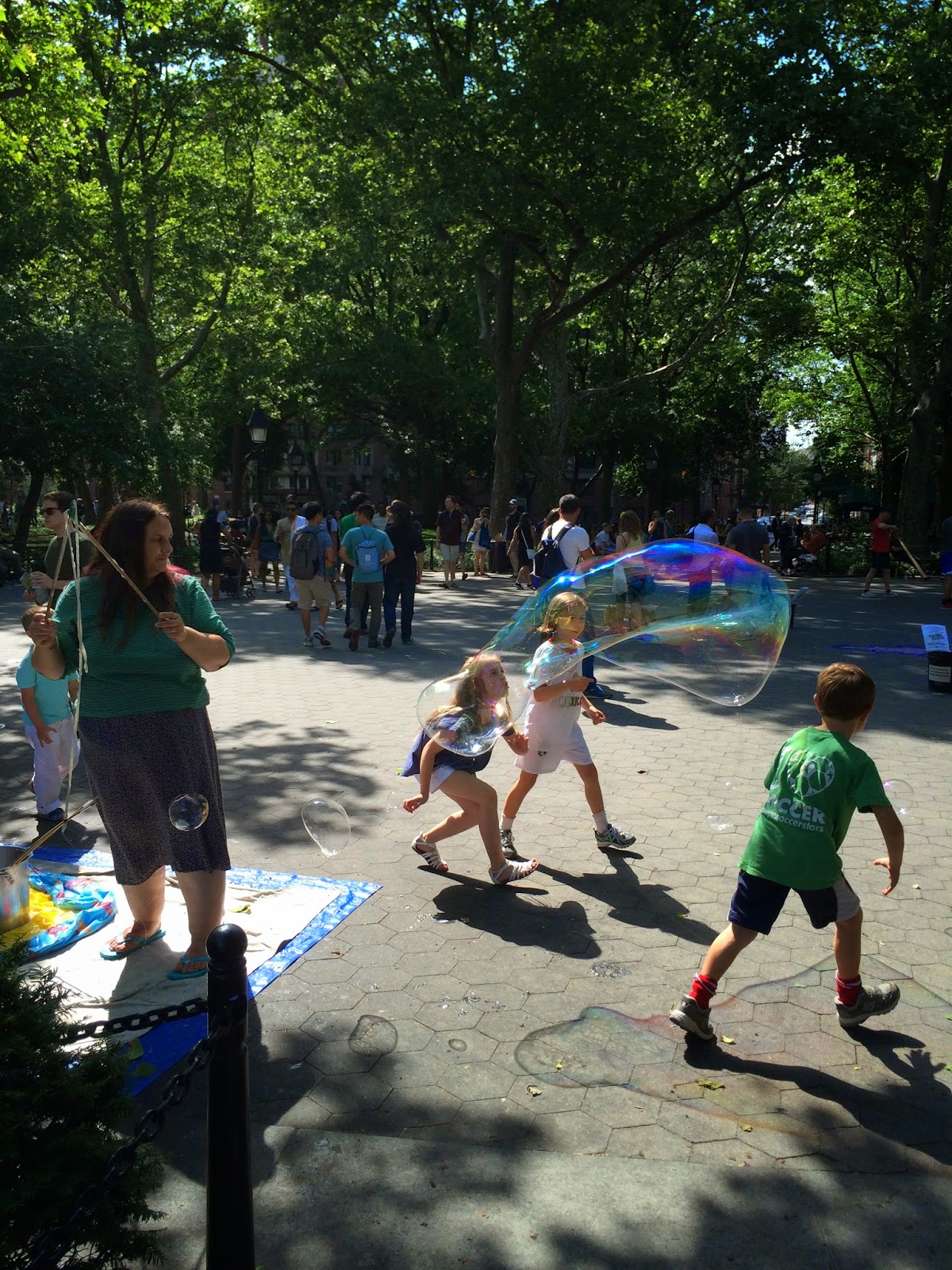 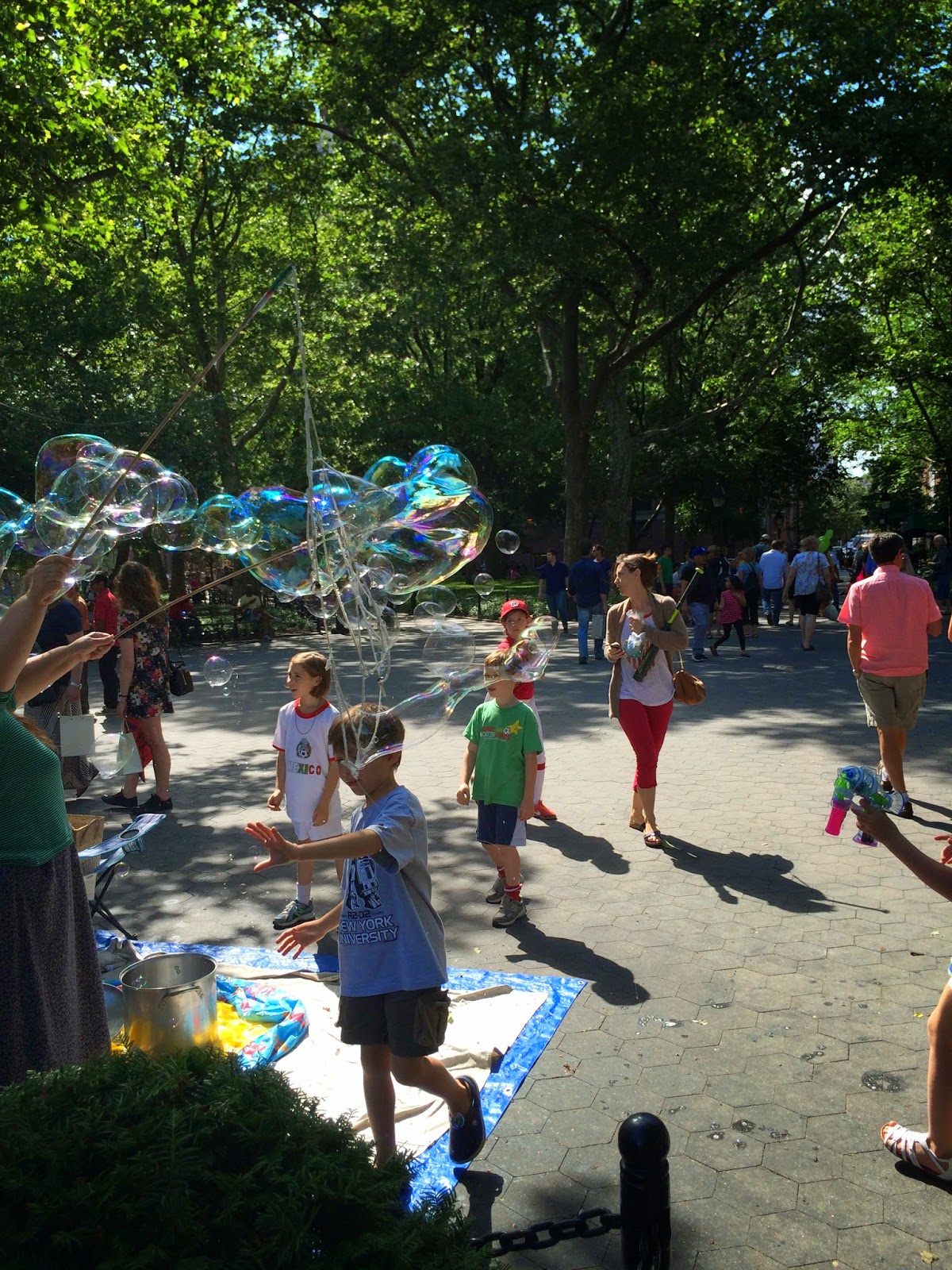 That night Kevin and I saw what is by far the very best stage performance I have ever seen.  We saw Macbeth at the Park Avenue Armory.  Absolutely incredible.

First it helps to know a little about the space.  The Armory was built in the Upper East Side by New York State's Seventh Regiment of the National Guard, the first volunteer militia to respond to President Lincoln's call for troops in 1861.  It's an enormous space with soaring ceilings and rooms to the side which are considered some of the best preserved 19th century rooms in the country.  It is now used for as a cultural space for unusual or interactive art that cannot be shown in traditional museums.

When we arrived we were told which Scottish clan we belonged to and were sent to that room to join our clan. 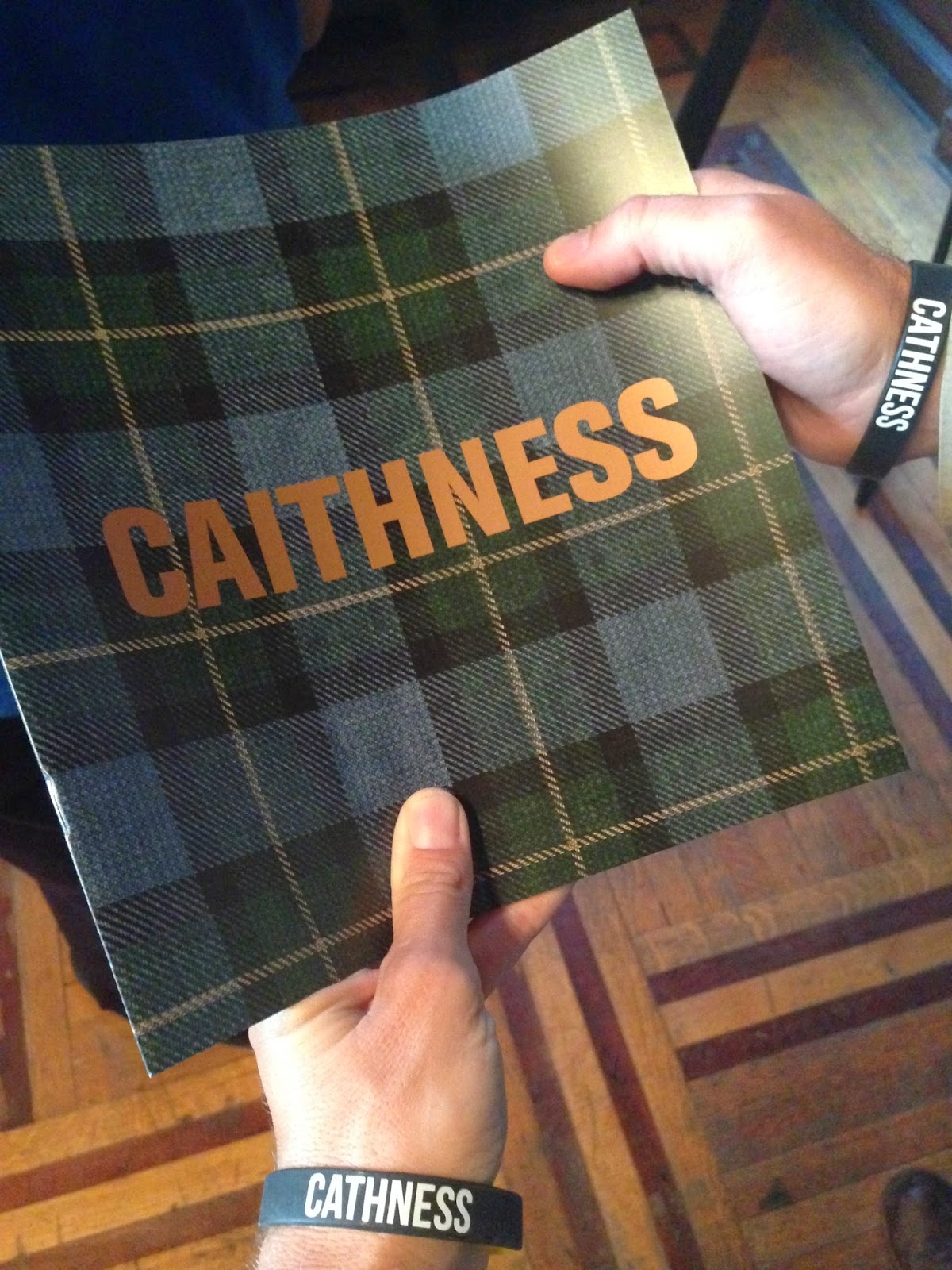 Once our clan was assembled we were taken to the performance hall.  We entered a dark, silent room the size of football field.  No photos were allowed inside so I pulled some off the internet to show you (you might want to click on them to enlarge them). 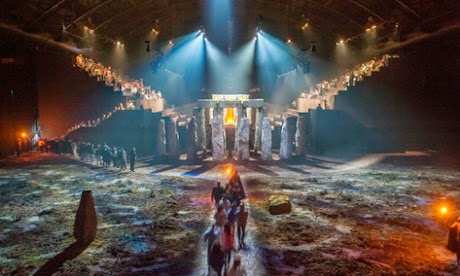 We walked down the path (seen above) through the mud and past people wearing dark robes toward a Stonehenge-looking sculpture.  The setting was 1000 A.D. in Scotland.  The audience was seated in rows on either side of a long narrow stage in the middle (although it wasn't really a stage, more of a play space).  The play was so intense and immersed the audience so much (at one point it rains during a horrific battle scene) that there was no clapping at all during the performance - we were all so drawn into the play that we forgot we were spectators. 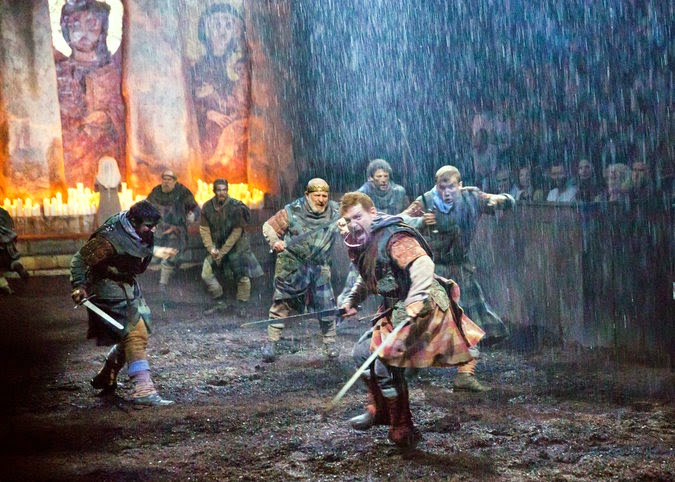 It helped also that the actors were some of the best in the world (Kenneth Branagh who has been in dozens of Shakespeare plays and movies, played Macbeth) and Alex Kingston played Lady Macbeth (you might recognize her from ER). 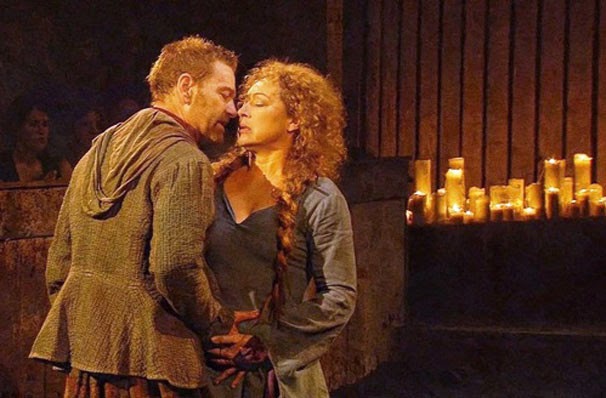 It was so incredible that I am still thinking about it days later.  I wish I could see it again.

And of course Sunday was Father's Day.  Now I know that Coney Island wouldn't have been Kevin's first choice if he had been really honest about how he wanted to spend Father's Day.  But I guess choosing an amusement park over a museum and then a bar to watch the World Cup is what makes him such a great father. 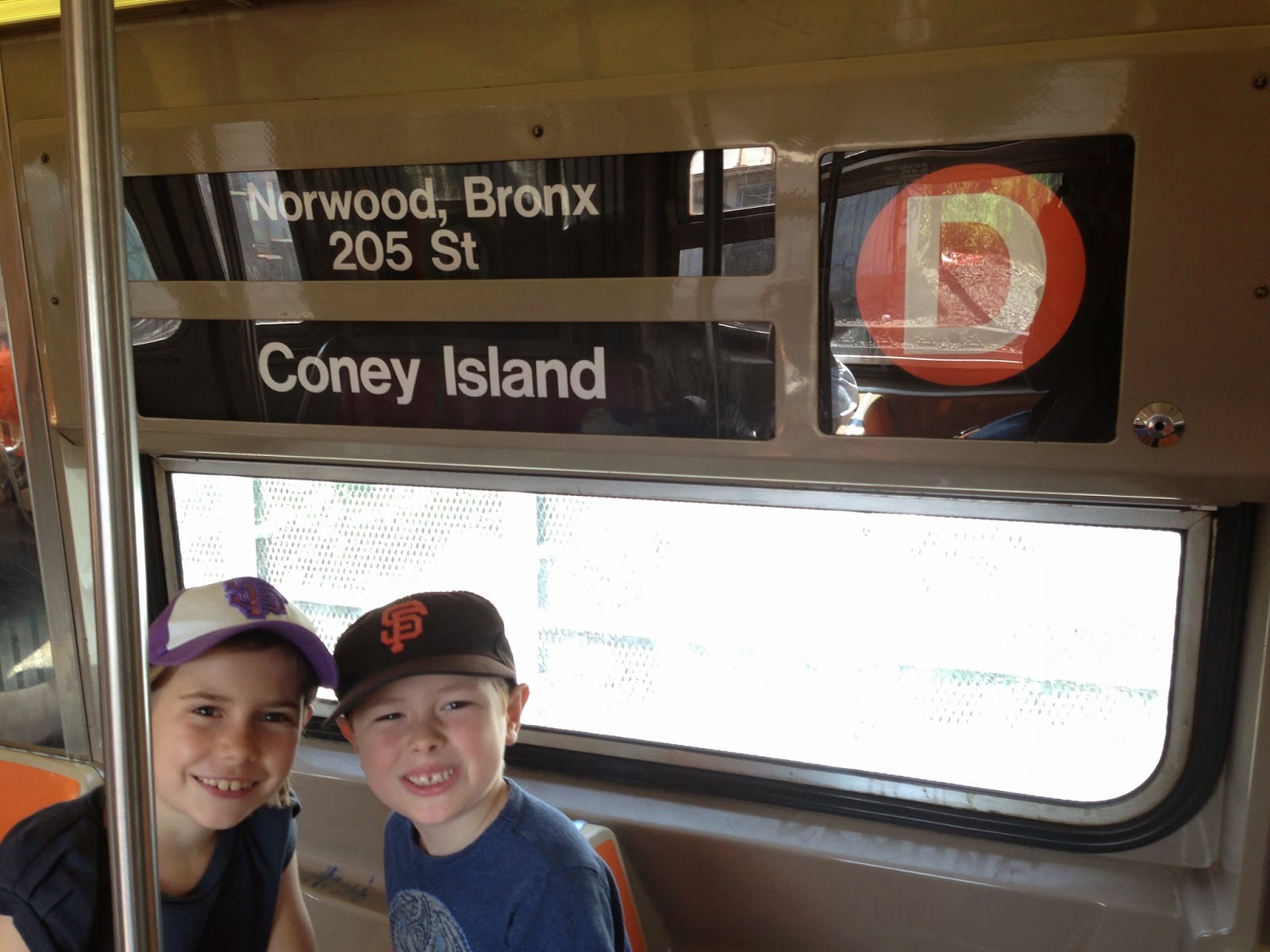 We took the hour and a half subway ride all the way out the end of Brooklyn where Coney Island (not actually an island, by the way) is found.  It is the East Coast version of the Santa Cruz Beach Boardwalk but with far less attractive people.  I know, that's not very kind of me to say, but it's the truth.  There were some doozies. 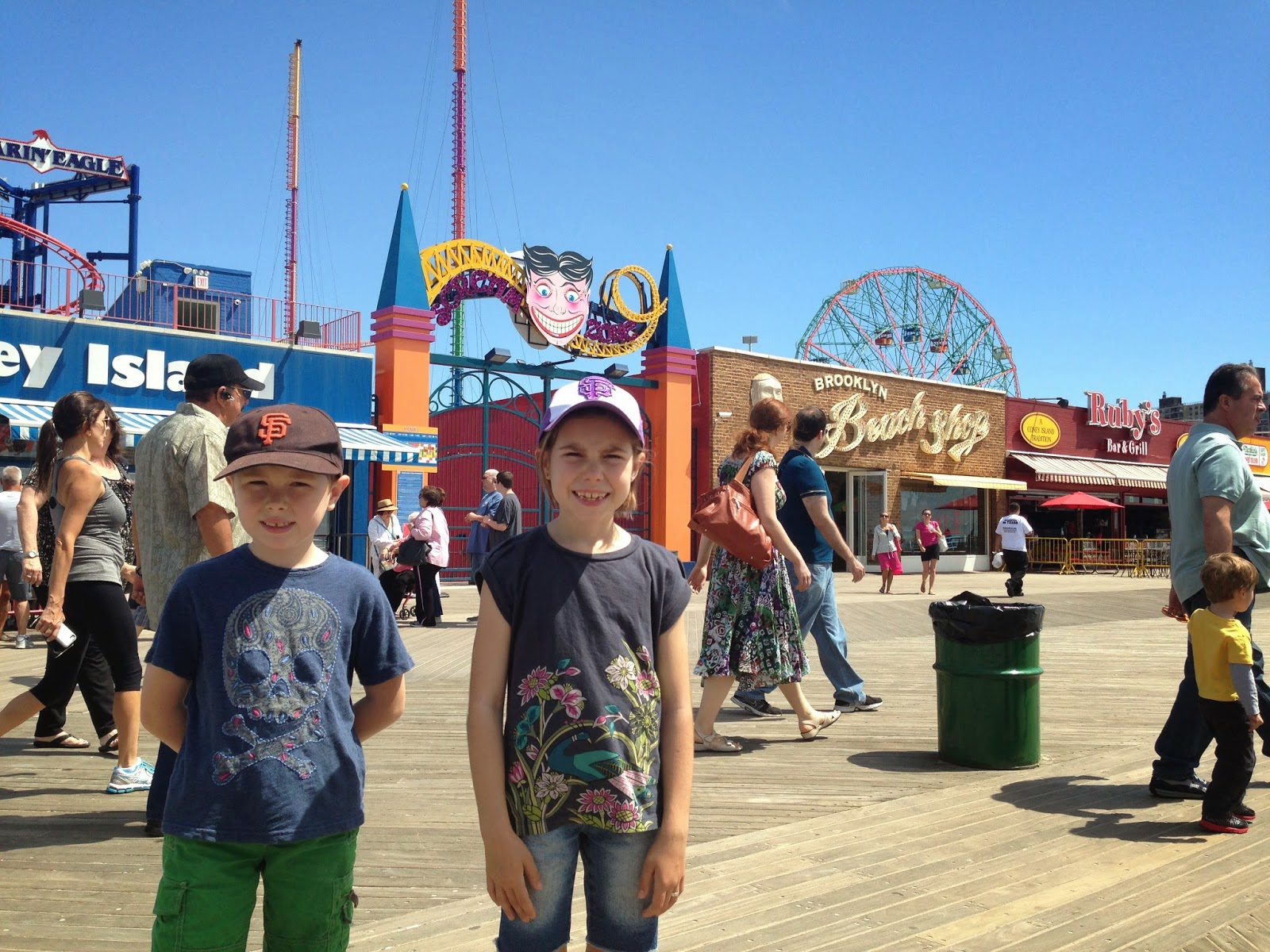 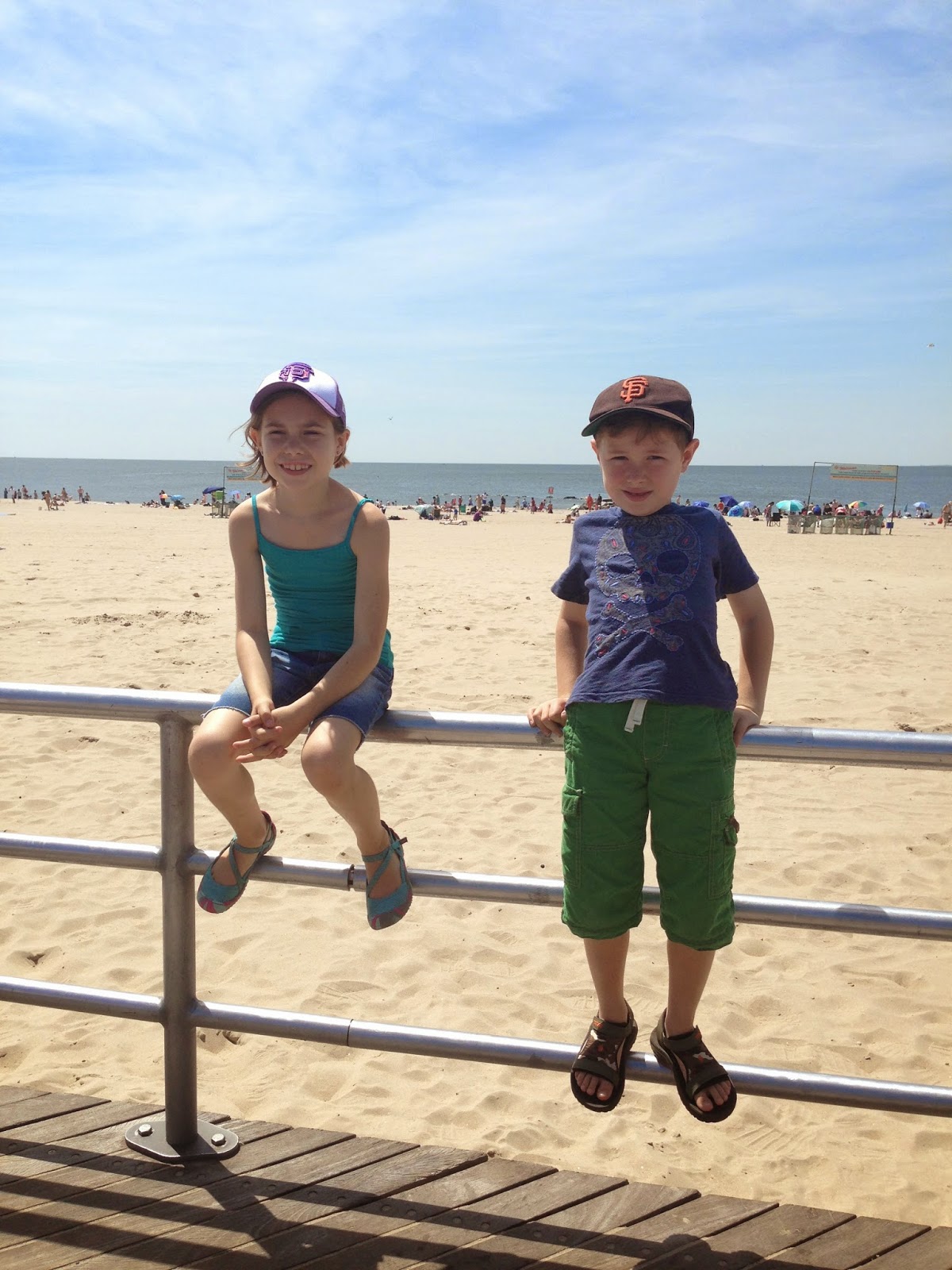 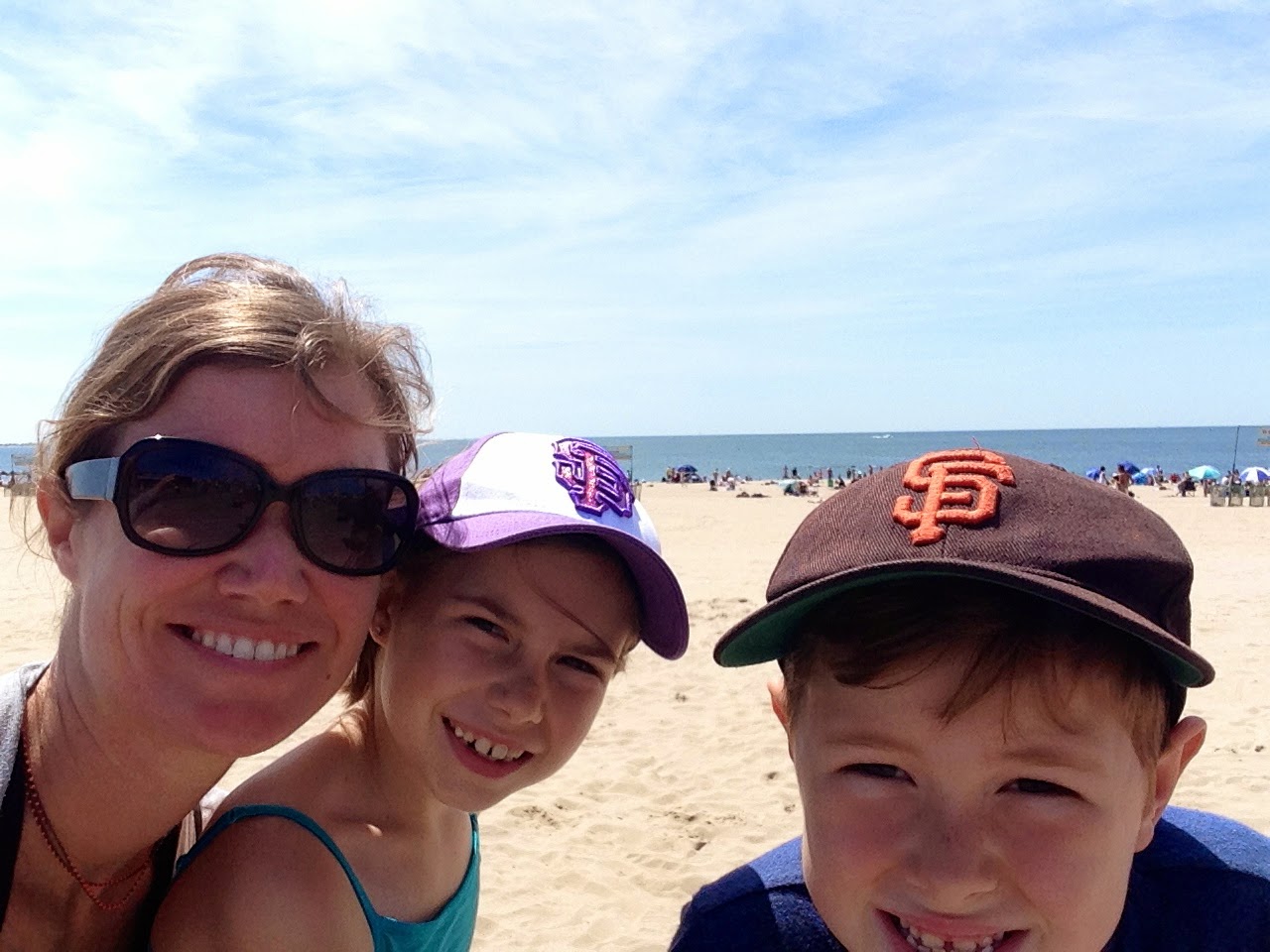 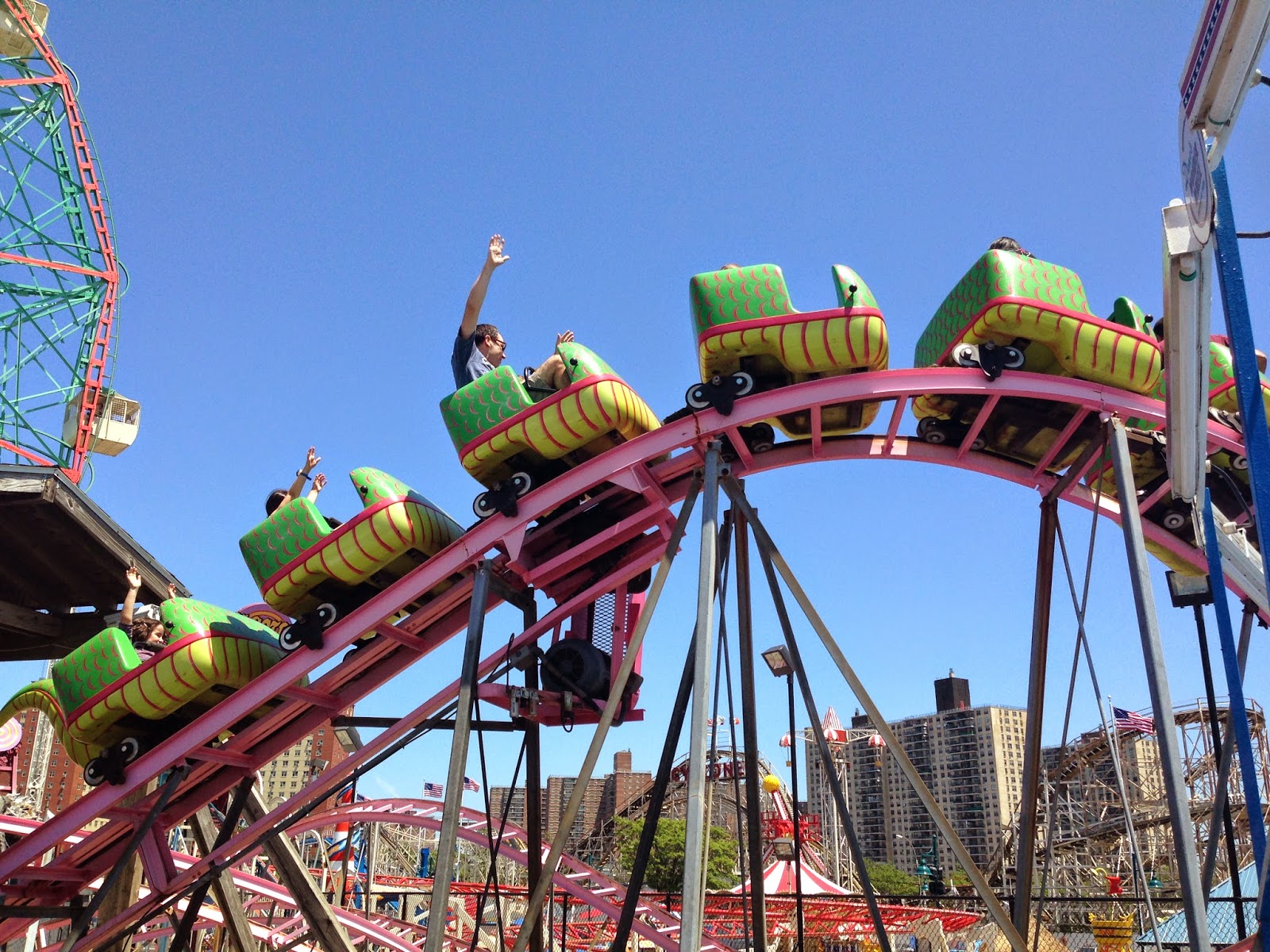 Holden rode his first roller coaster (above) and loved it.  The kids played carnival games, ate junk food and ice cream and even took a dip in the ocean. 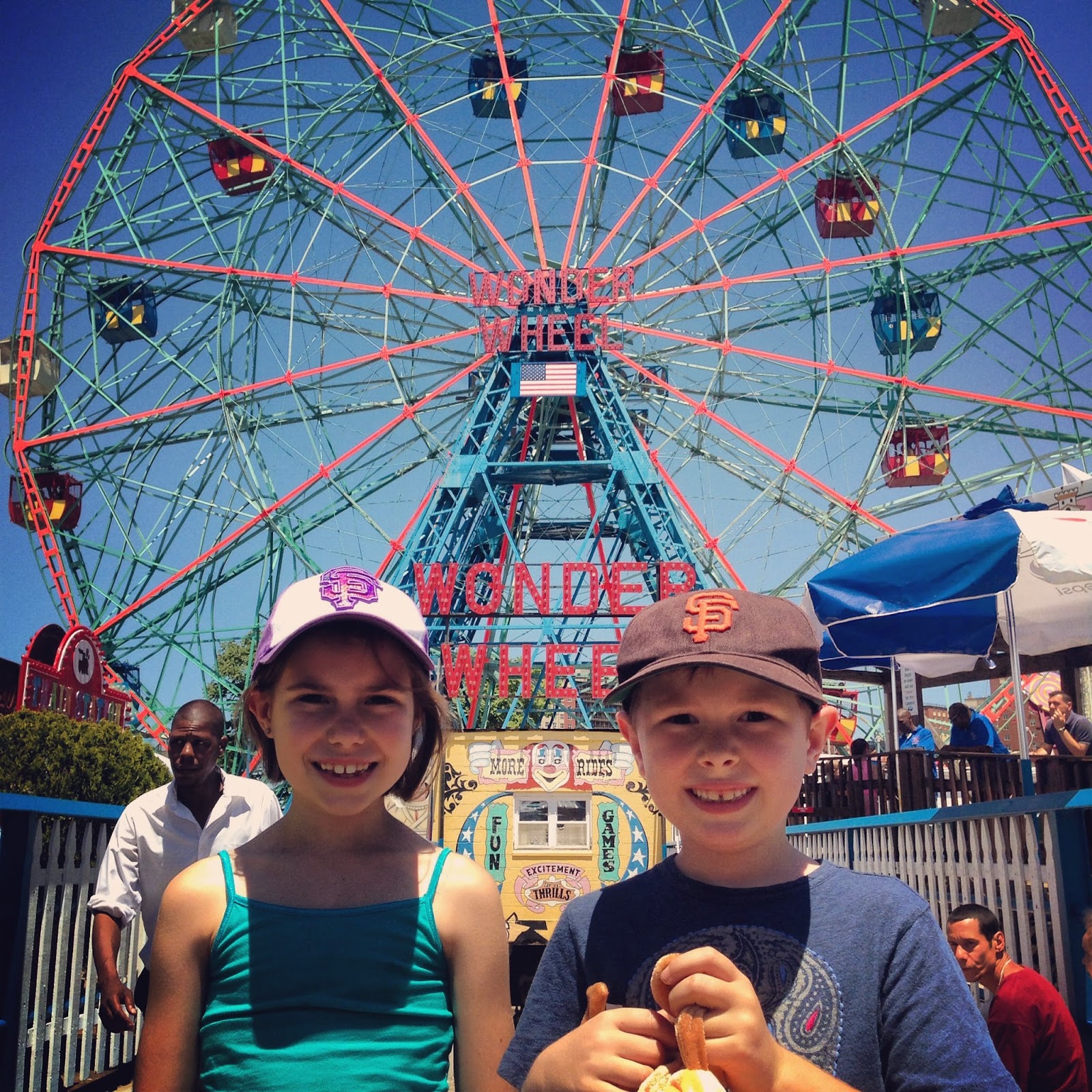 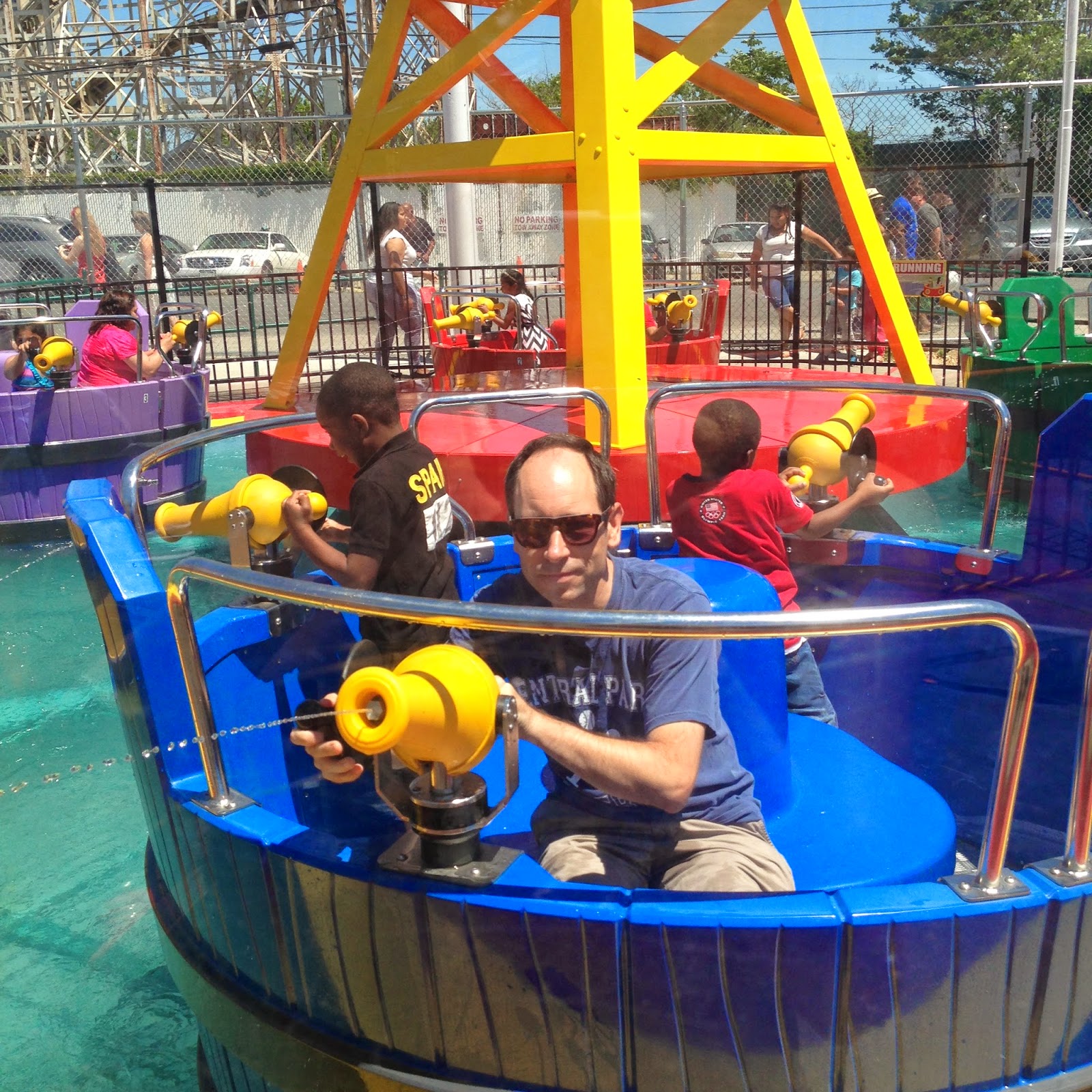 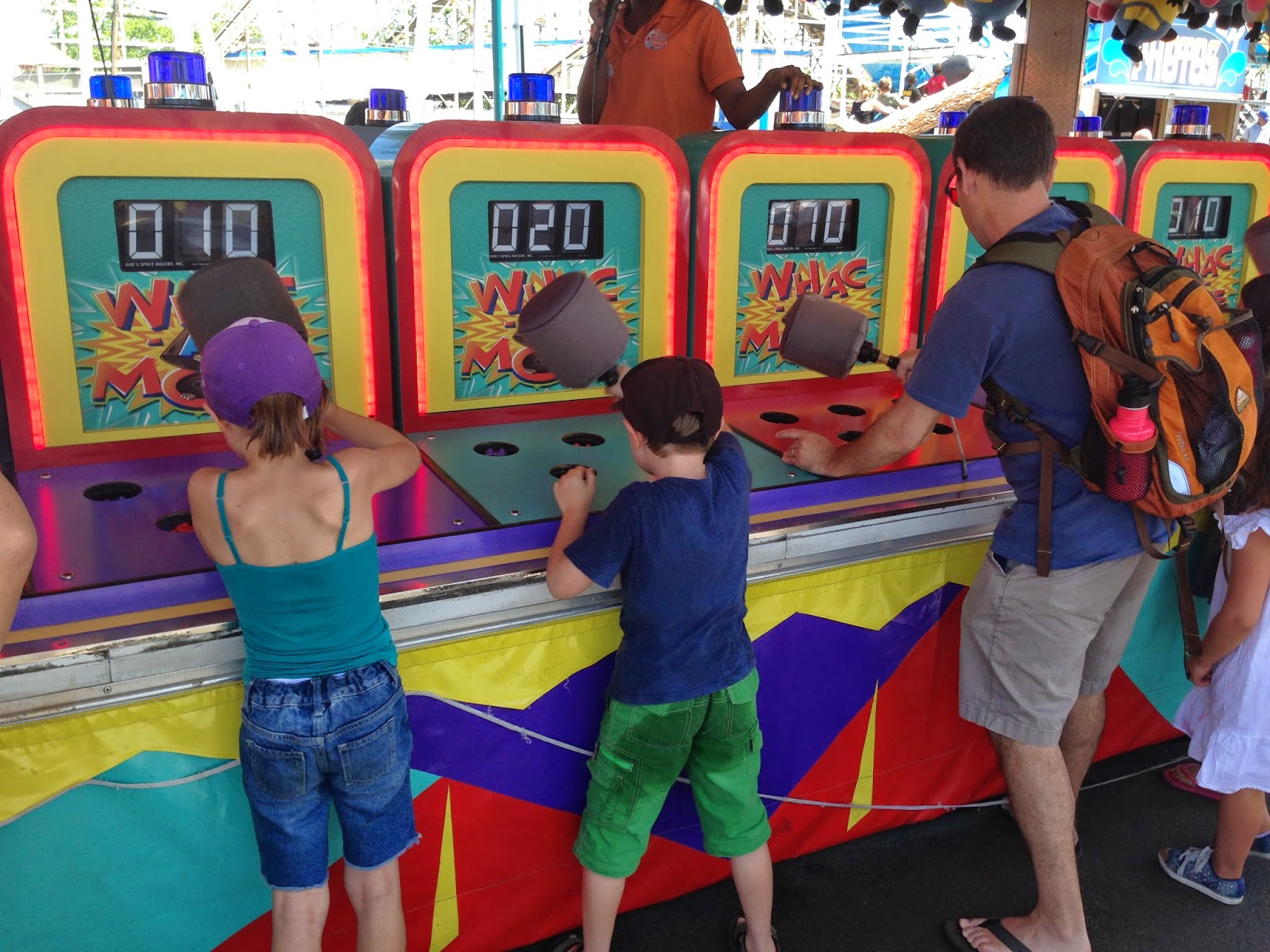 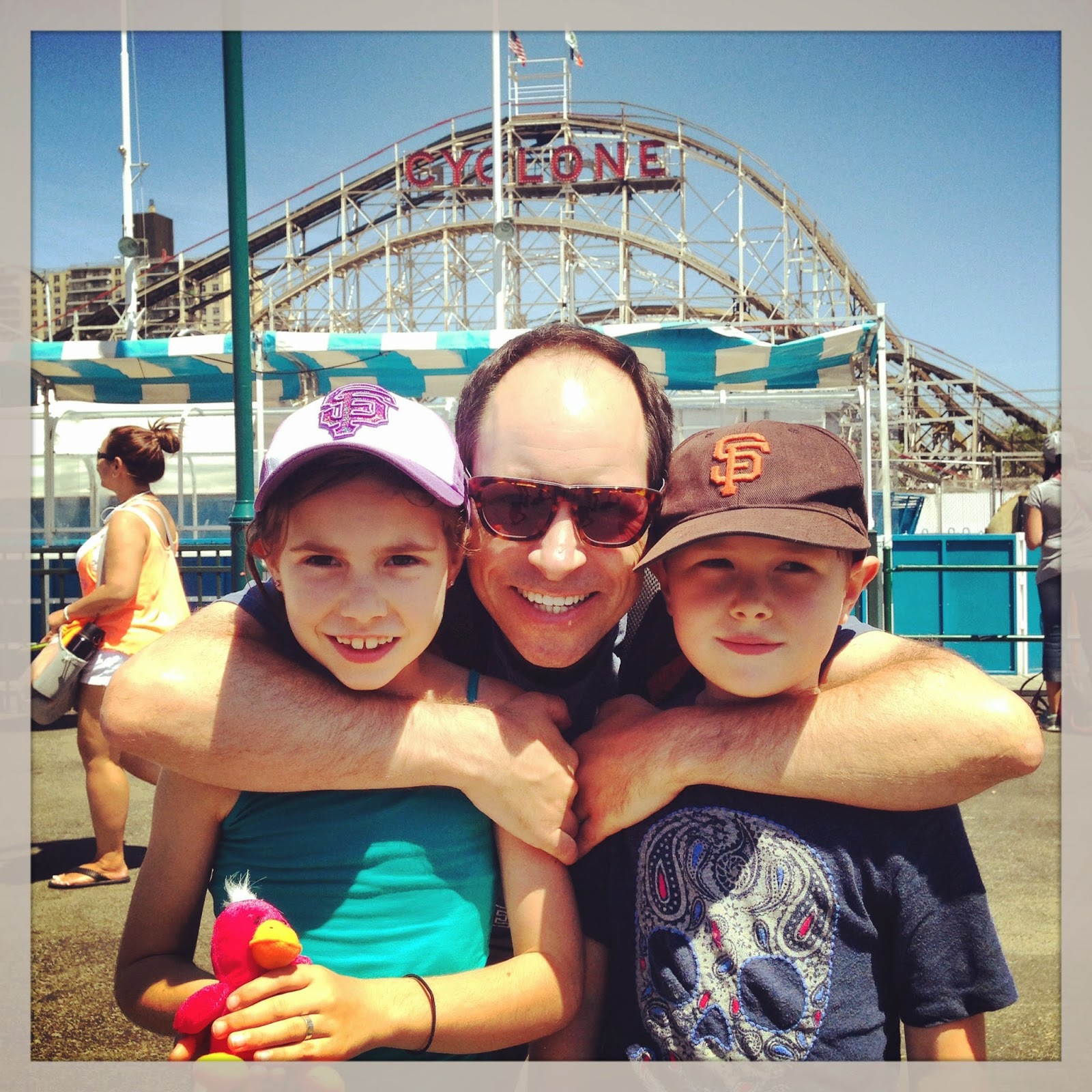 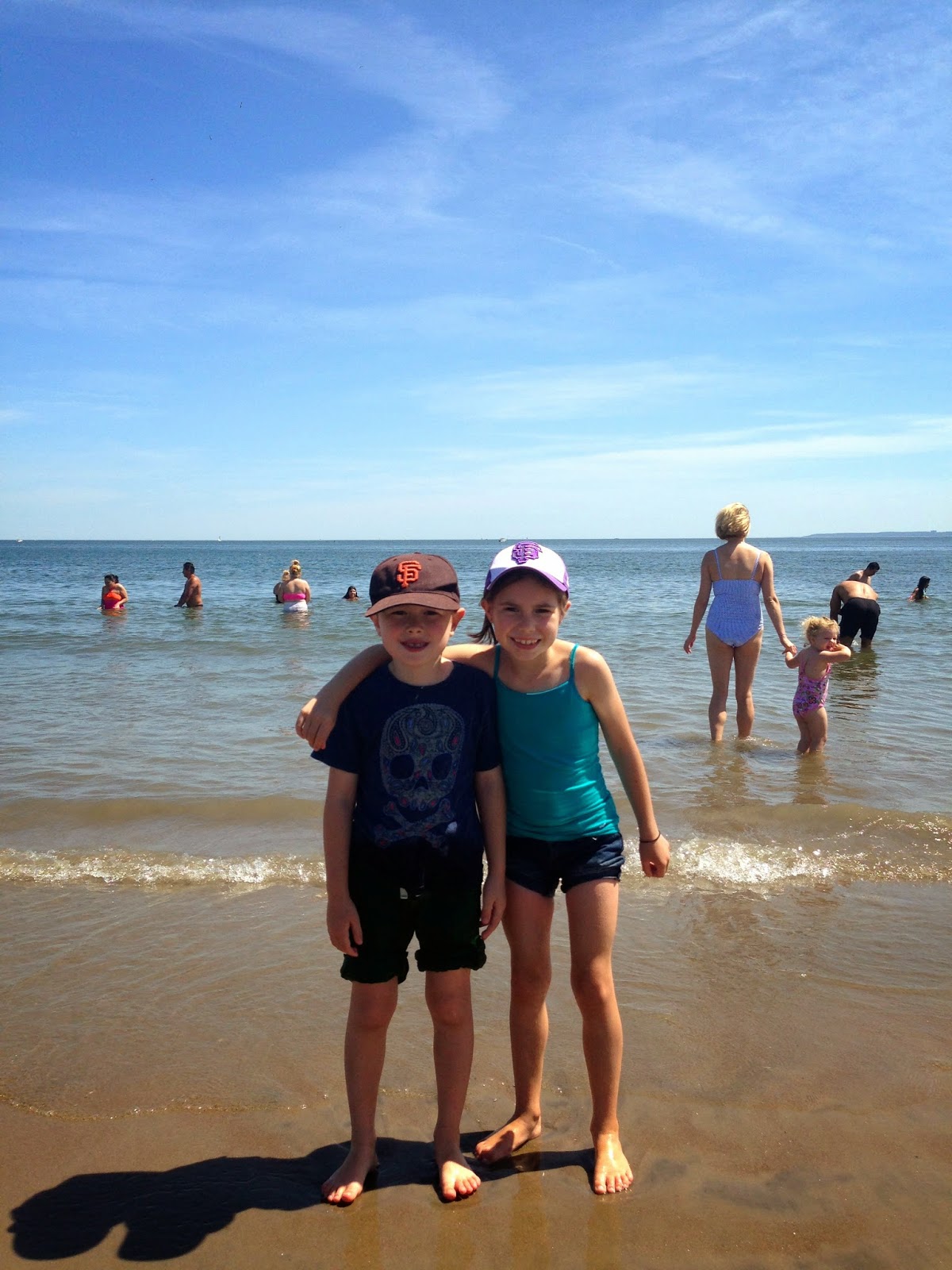 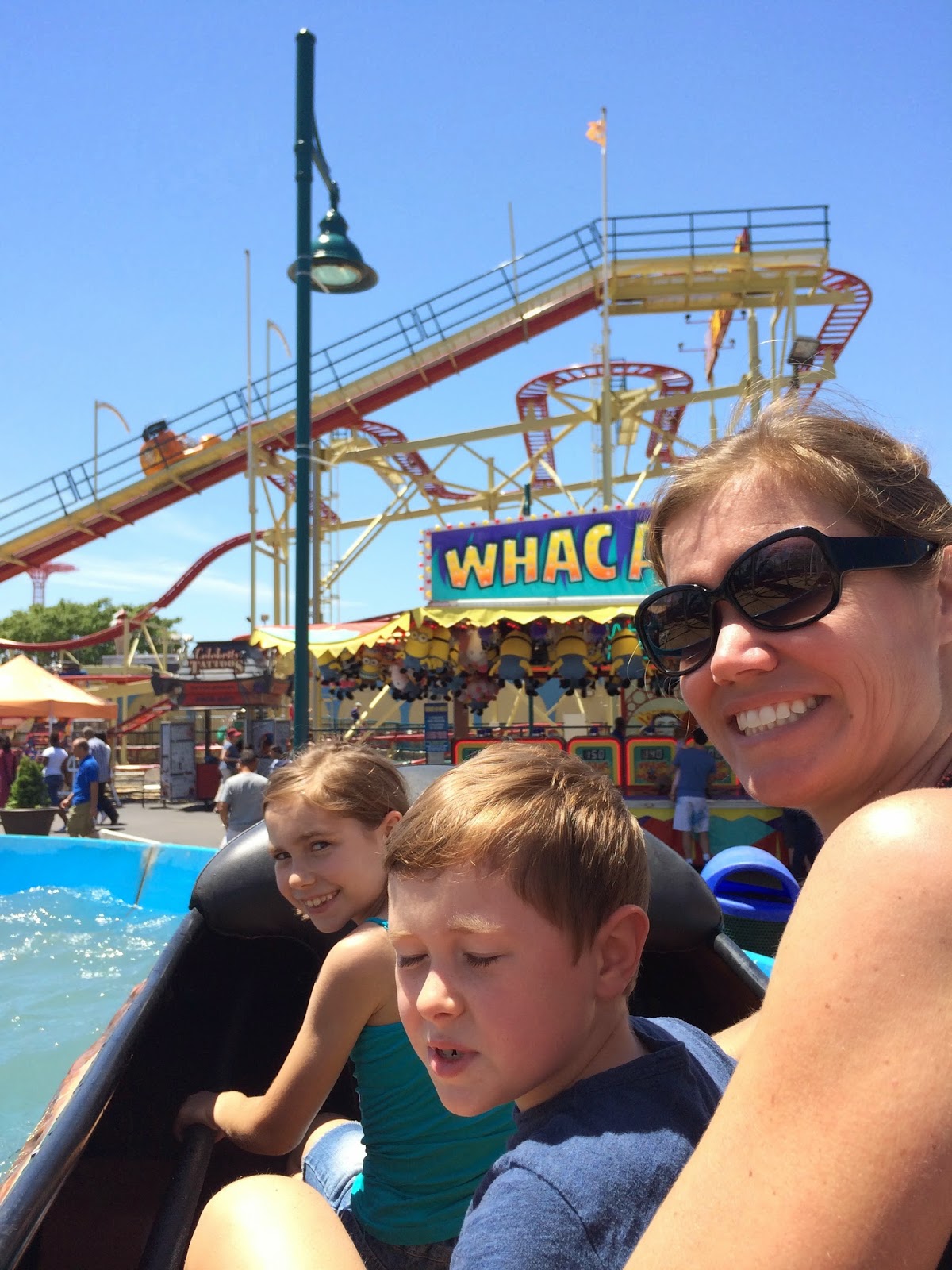 And all the fun helped take my mind off the fact that I was missing my dad a lot.  My first Father's Day without a father hit me in the gut at times throughout the day, especially once we were settled back at home, barbequing in the backyard and listening to the Giants baseball game. 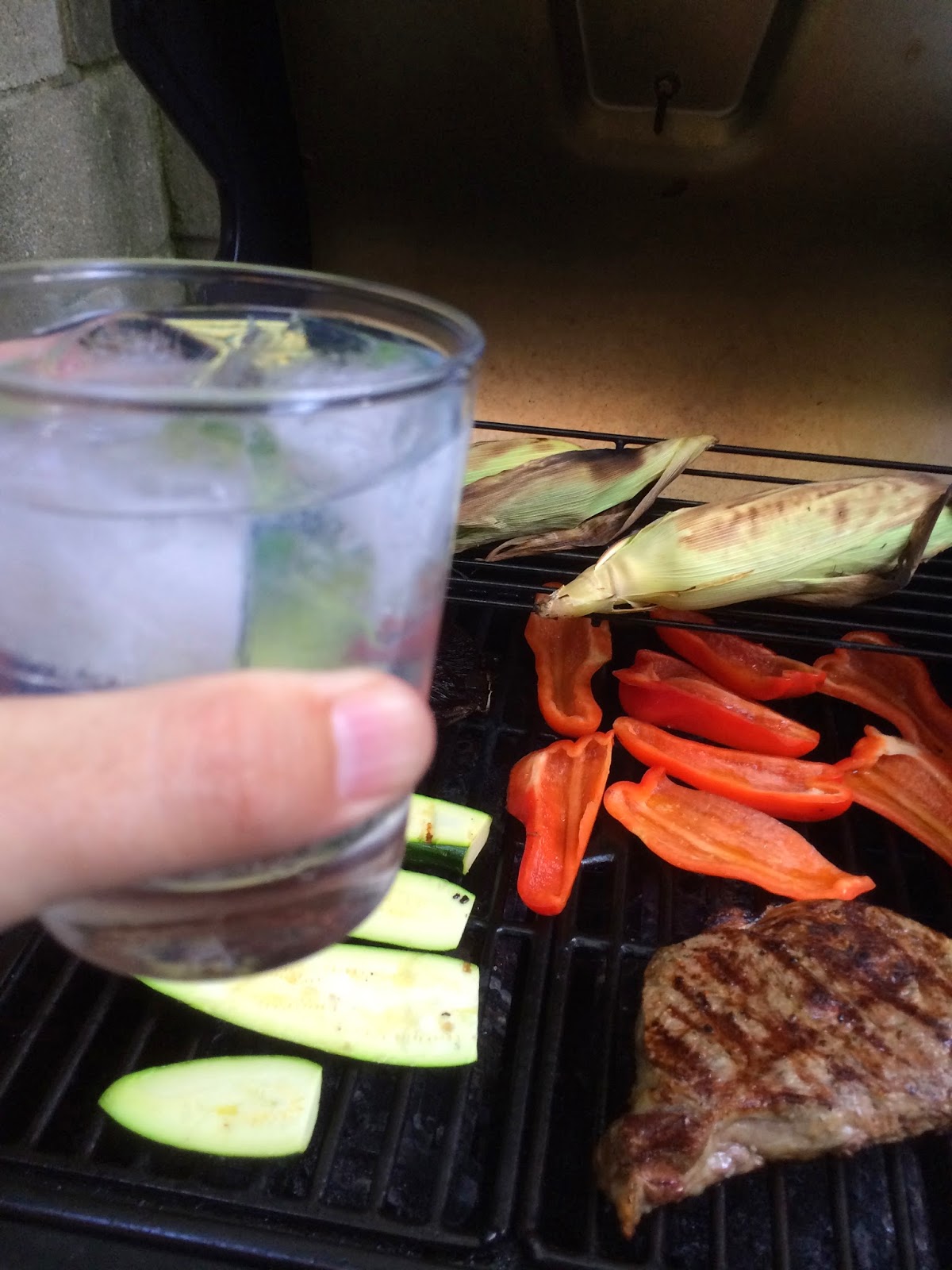 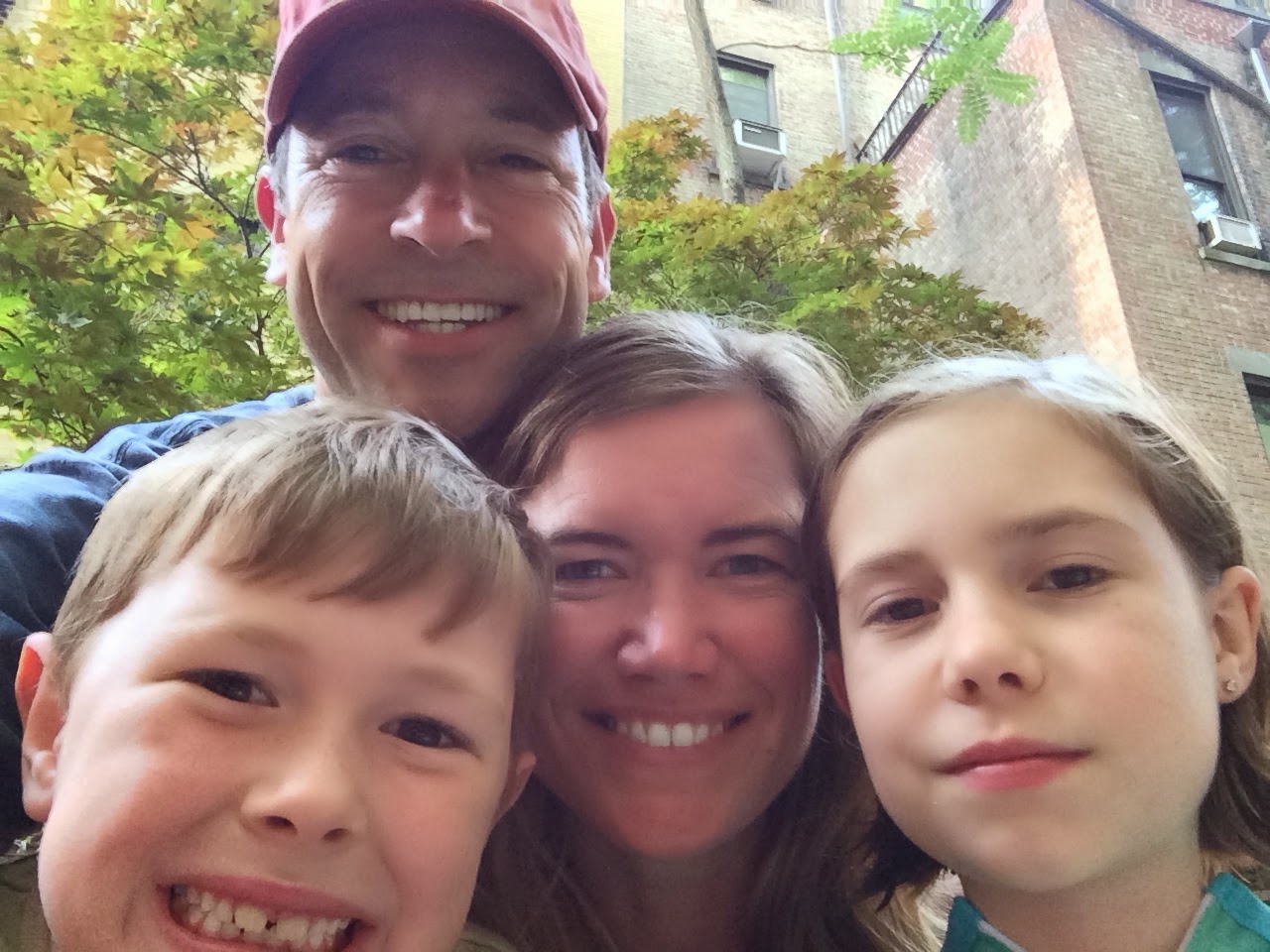 Happy Father's Day to my dad - one of the smartest, funniest, most generous people I've had the pleasure to love.