Saturday marked the eleventh anniversary of our beautiful wedding. 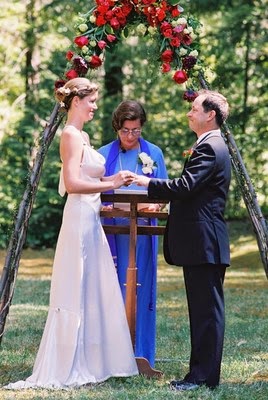 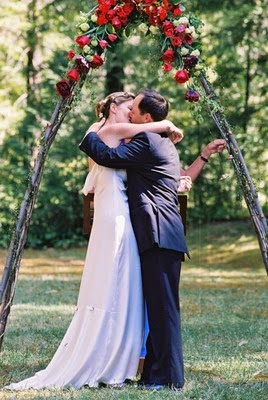 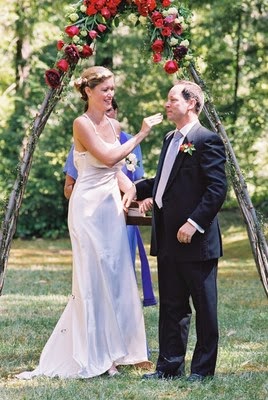 We had a quiet day leading up to a fun night out.  Holden was invited to a birthday party and although it was a very difficult decision for him whether or not to miss soccer in order to go to the party, in the end the party won.  And it was such a refreshing birthday party.  He was dropped off at Nathaniel's apartment.  There were two other boys from their class there.  The four of them apparently played in Nathaniel's room with his toys for an hour or so, then they walked down the block for some pizza.  They hit the ice cream truck on the way out for some popsicles and then spent another hour or so playing in the courtyard next to the apartment building.  They finished up by watching a video in his living room.  No hired entertainers.  No expensive birthday cupcakes.  No wasteful goodie bags filled with crap to take home.  And Holden said "it was so awesome!"  I think I really like this Nathaniel's mom.

Meanwhile, Kevin and Ella took a bike ride through Riverside Park (no photos because the family documentarian wasn't present) while I enjoyed a nice table in the sun at a local cafe and caught up on some reading.  We were all in our happy place.

The babysitter arrived soon after Holden got home and Kevin and I walked down a few blocks to the newly remodeled Tavern on the Green. 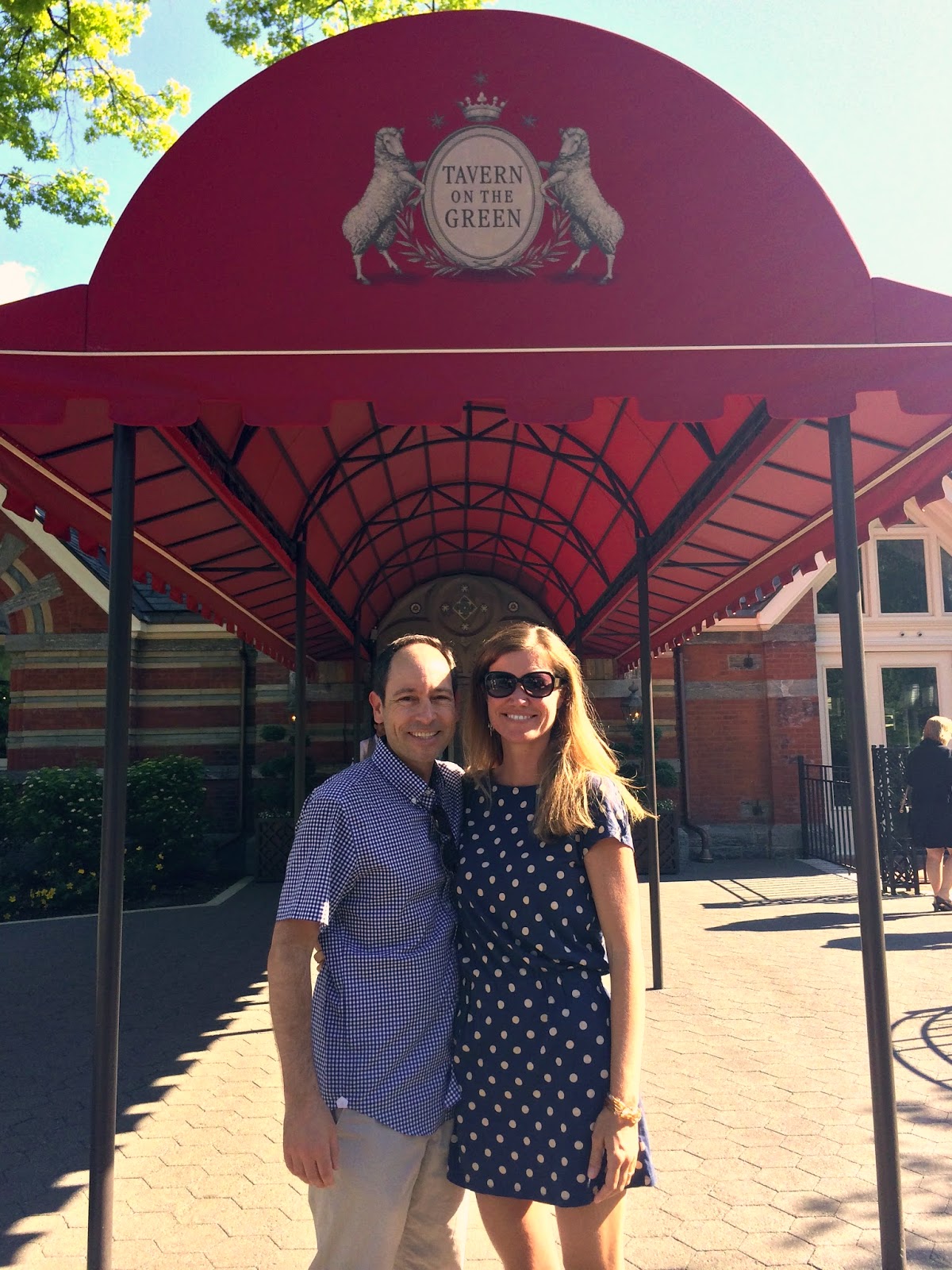 The restaurant was originally a sheep corral with Sheep Meadow (the large grassy area where we spent the day a couple weekends ago) just across the way.  In 1934 it was turned into a restaurant and in 2007 it was the largest grossing restaurant in the United States.  It just reopened in April after several years undergoing a multi-million dollar renovation.  We sat outside on a gorgeous evening, overlooking Central Park, and had a delicious meal.

And then because we live in New York City, we saw a Broadway play.  I have to admit, I wasn't blown away by the show, The Realistic Joneses, but it had some big name stars in it so it was fun to see them (Toni Collette, Marisa Tomei, Michael C. Hall).  It wasn't terrible but the story was odd and I've realized that when you see actors who are used to doing film or TV, they often aren't very good on stage doing the same show over and over and over.  They come across as bored and wanting to get it over with.  I found that with Jane Lynch when we saw her in Annie as well.  But we still had a great time and stopped for a drink on the way home at a hip rooftop bar above the Hudson Hotel. 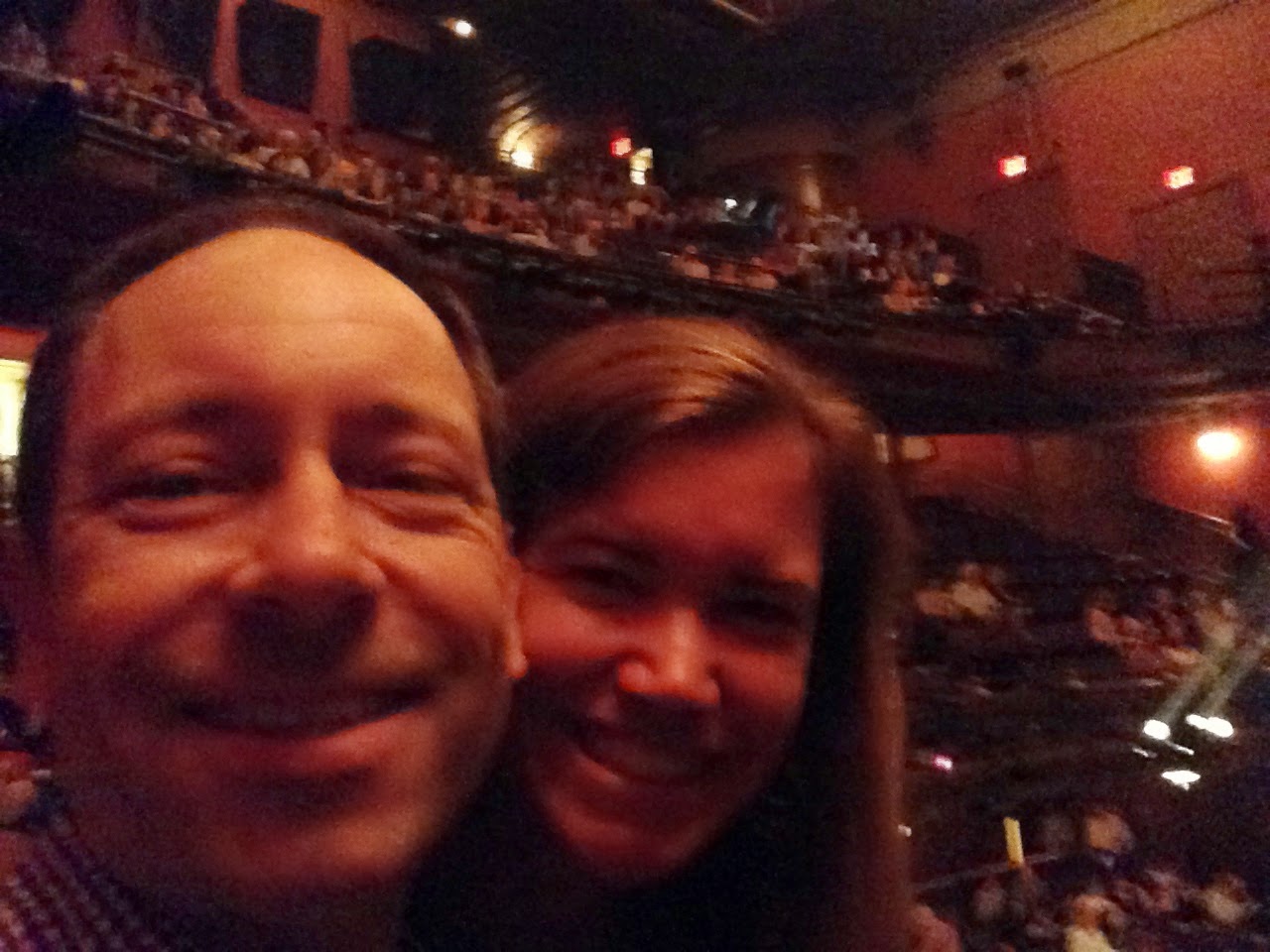 Sunday was still sunny and beautiful so we spent as much time outdoors as possible.  I guess as a late anniversary present Kevin let me sleep in while he and Ella jogged around the reservoir in Central Park (Again, no photos.  Kevin hasn't learned that if I can't blog about it, it didn't happen).  With no plans we started the day slow in our back yard, Kevin and I reading while the kids worked on a science experiment. 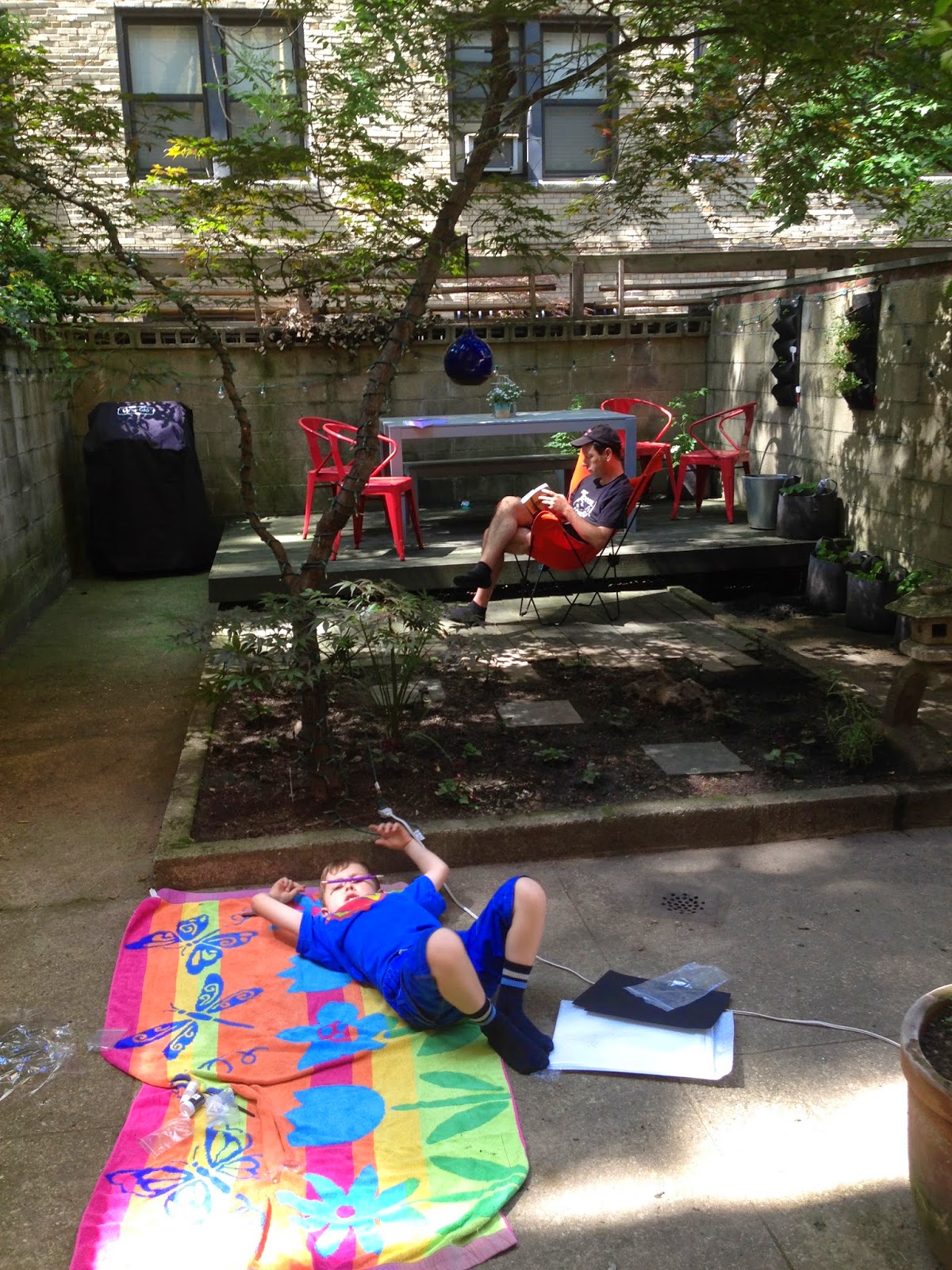 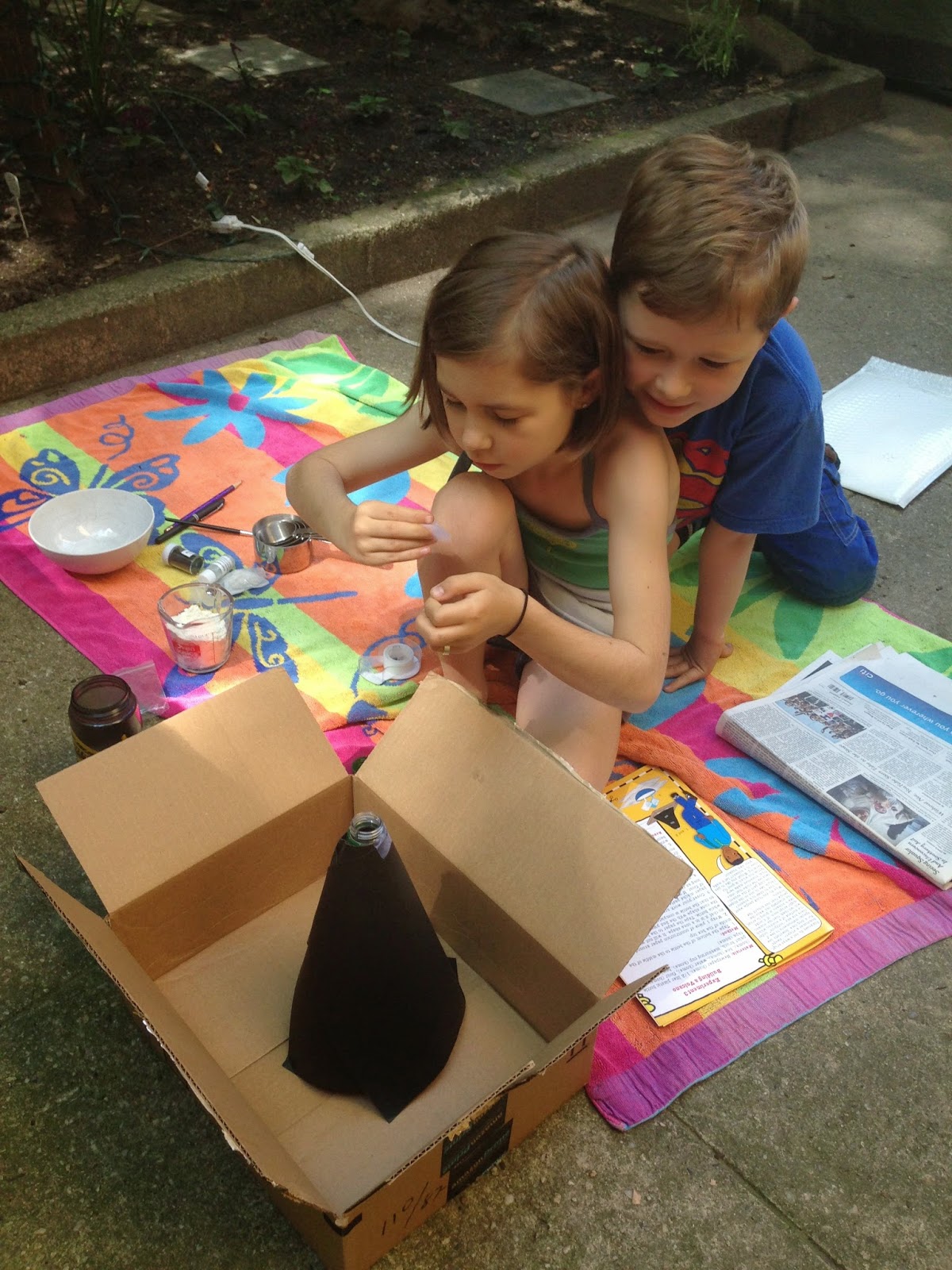 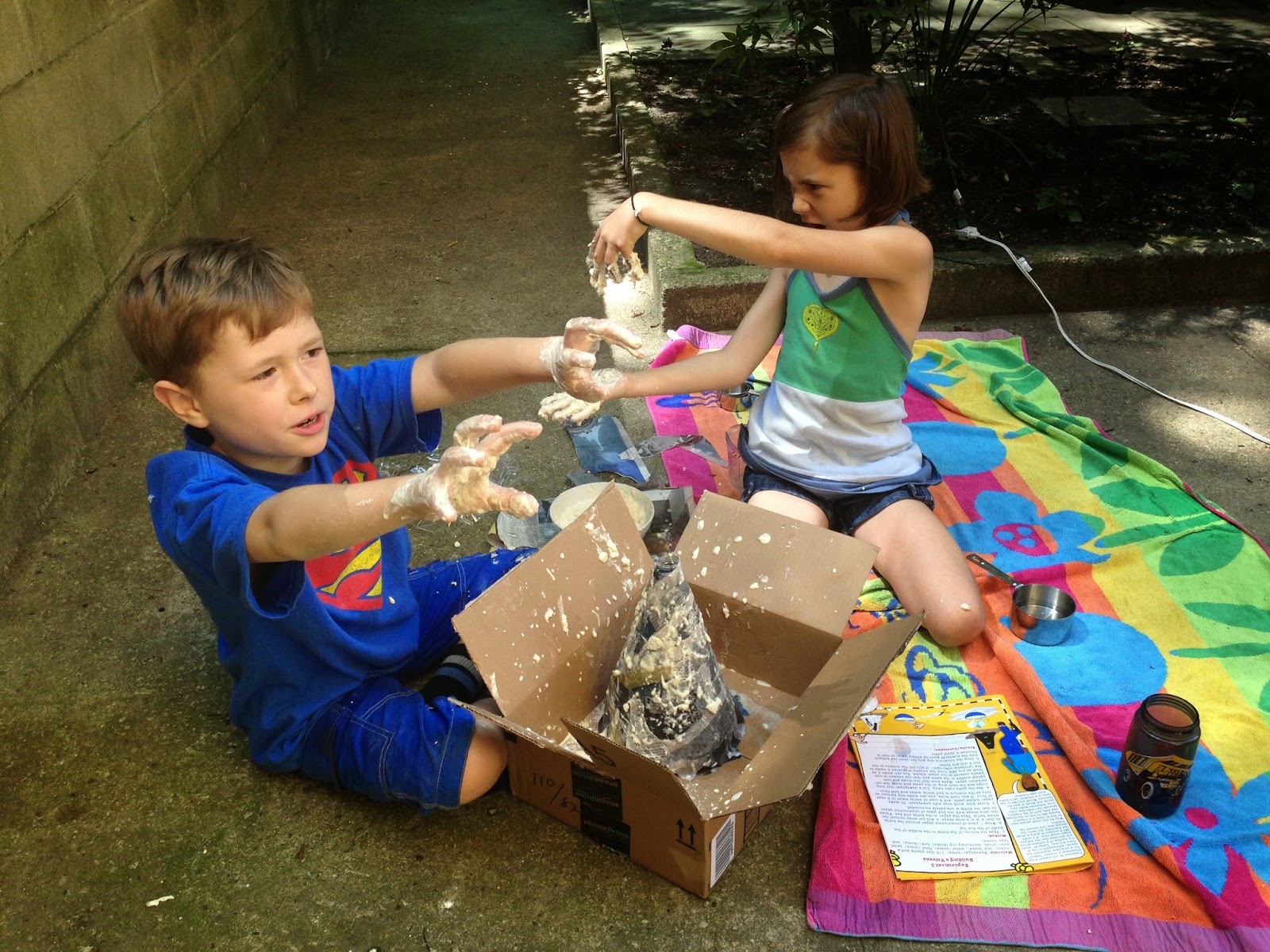 I have the kids signed up for two new box-a-month subscriptions.  Remember our old Kiwi Crate and Little Passports, the art and geography boxes they used to get?  We loved those but they expired and we decided to try something new - both science related.  This volcano building experiment is from The Magic Schoolbus Young Scientists Club.  It was their first box and they had a lot of fun with it.  I found a coupon online to subscribe for a year at half price, so in case you're thinking of signing up, hunt for a coupon.  It also comes with a monthly email with links to educational sites related to the science topic of the month.  The second subscription is for Einstein in a Box (which unfortunately just changed their name to Groovy Lab in a Box).  Their experiments are all STEM related (science, technology, engineering and math).  Those boxes are filled with several activities and a lot of online resources and videos.  It may actually be a little too much because they haven't even finished the first box yet and we've already received the second.  Maybe they'll have more time in the summer.  Oh who am I kidding?  Our summer is planned to the gills.


When we all started to get restless the kids grabbed their scooters and we went in search of lunch, ice cream and the smallest park in Manhattan. 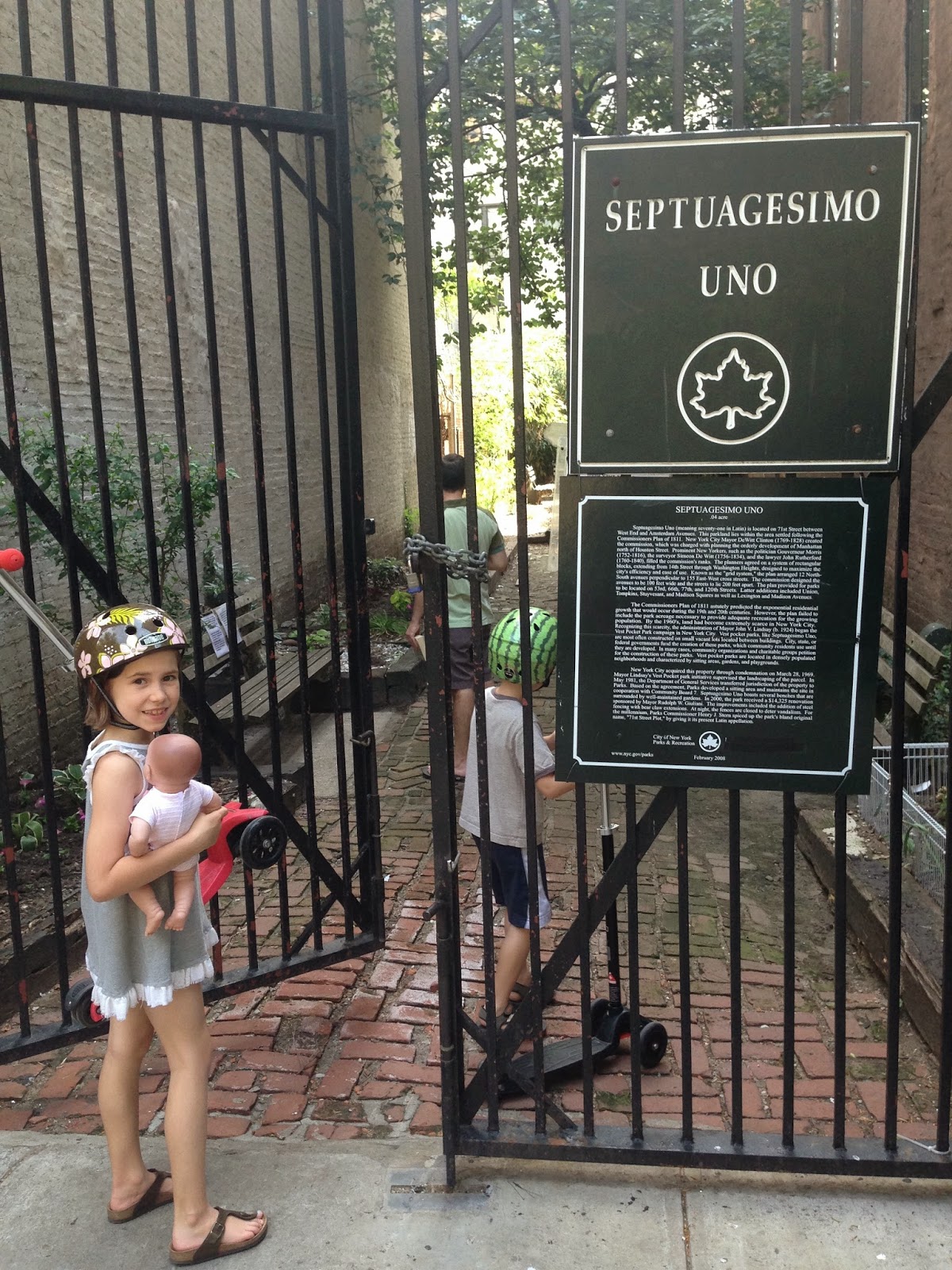 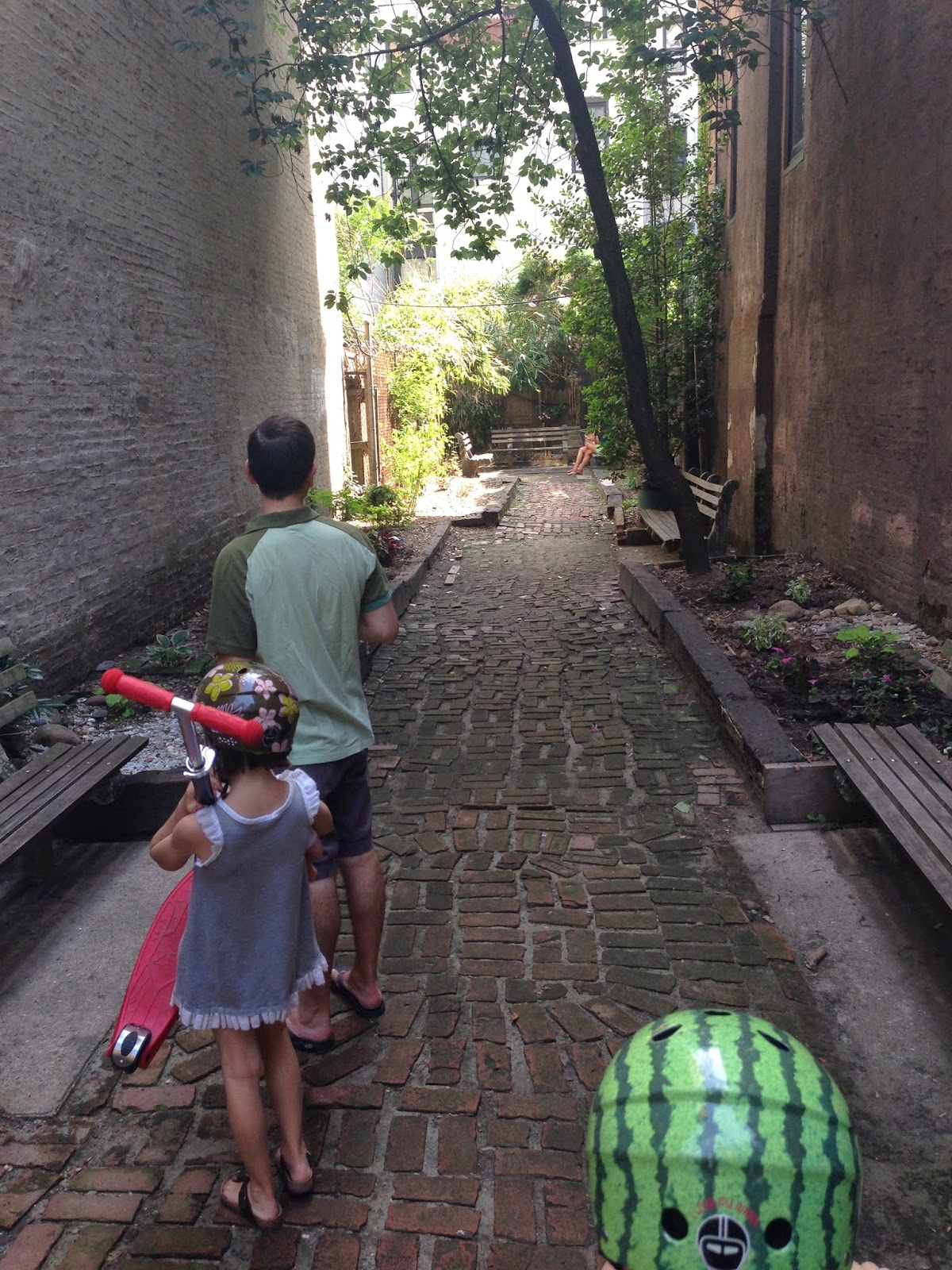 We learned about Septuagesimo Uno as it's called, from a movie we recently watched set in Manhattan.  It's 0.04 acres big small and sits in between two brownstones in the Upper West Side.  It's basically a cleaned up alleyway, maintained by the New York Department of Parks and Rec.  As you can imagine, it didn't hold our attention for long but it was fun to check it off our list.  We took the scenic route home through Riverside Park with a quick stop to climb a tree (the kids) and read (the grown-ups). 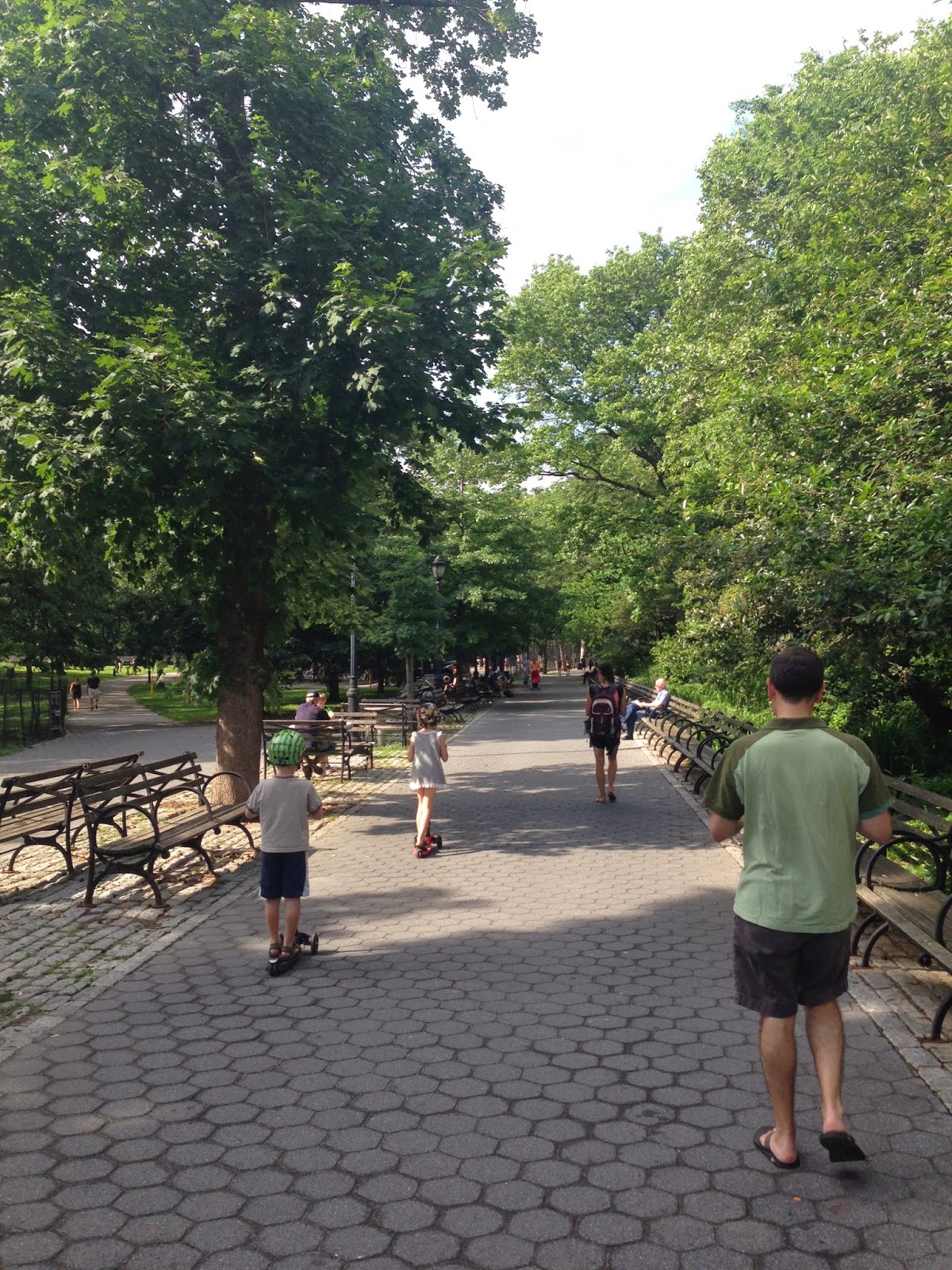 We ended the weekend with another yummy vegetarian BBQ - this time delicious BBQ portobello burgers topped with a BBQ slaw and smoked Gouda. 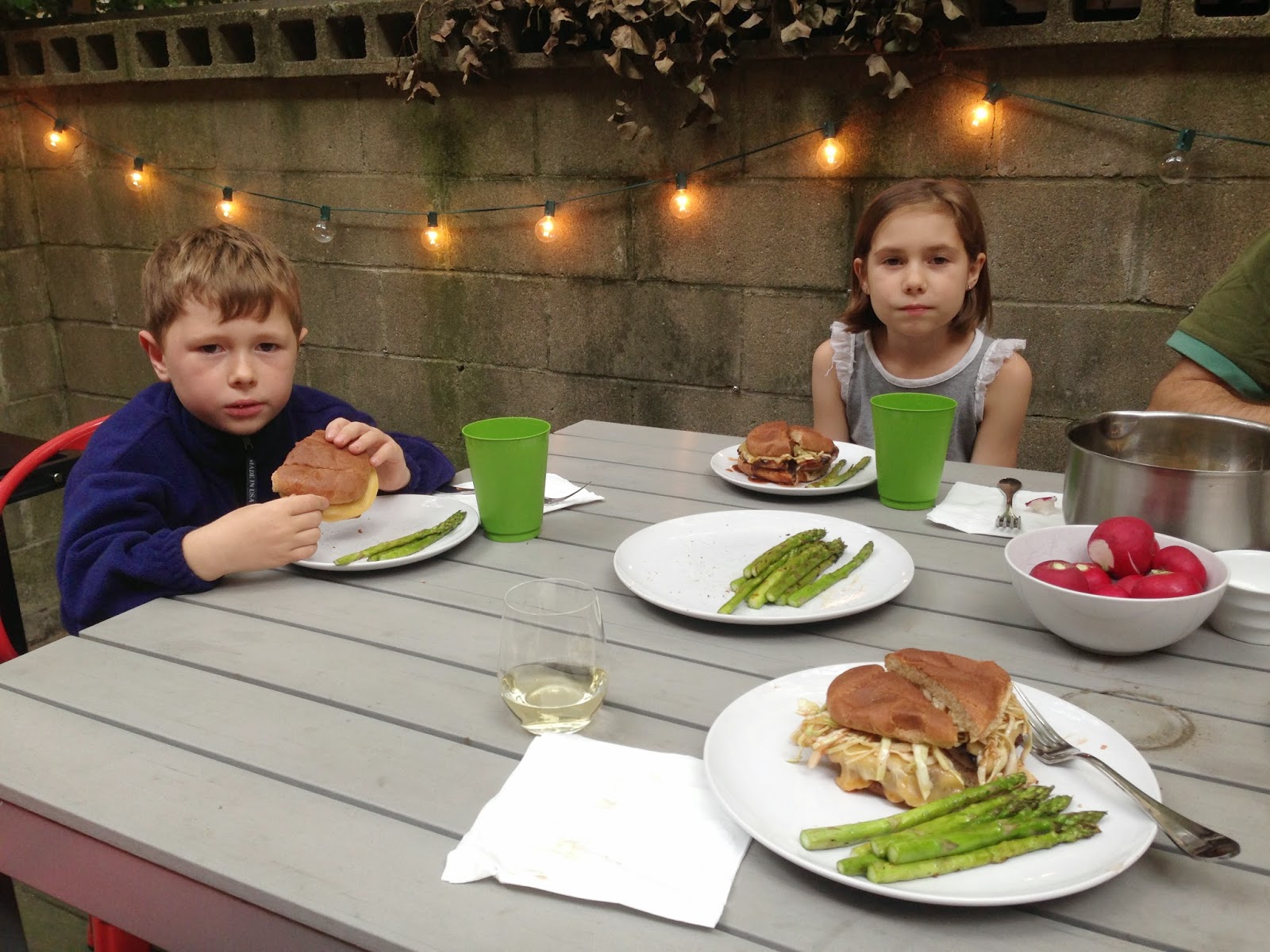 And as though on cue, we woke up Monday morning to a downpour of rain.  Mother Nature sure knows how to time her bad weather. 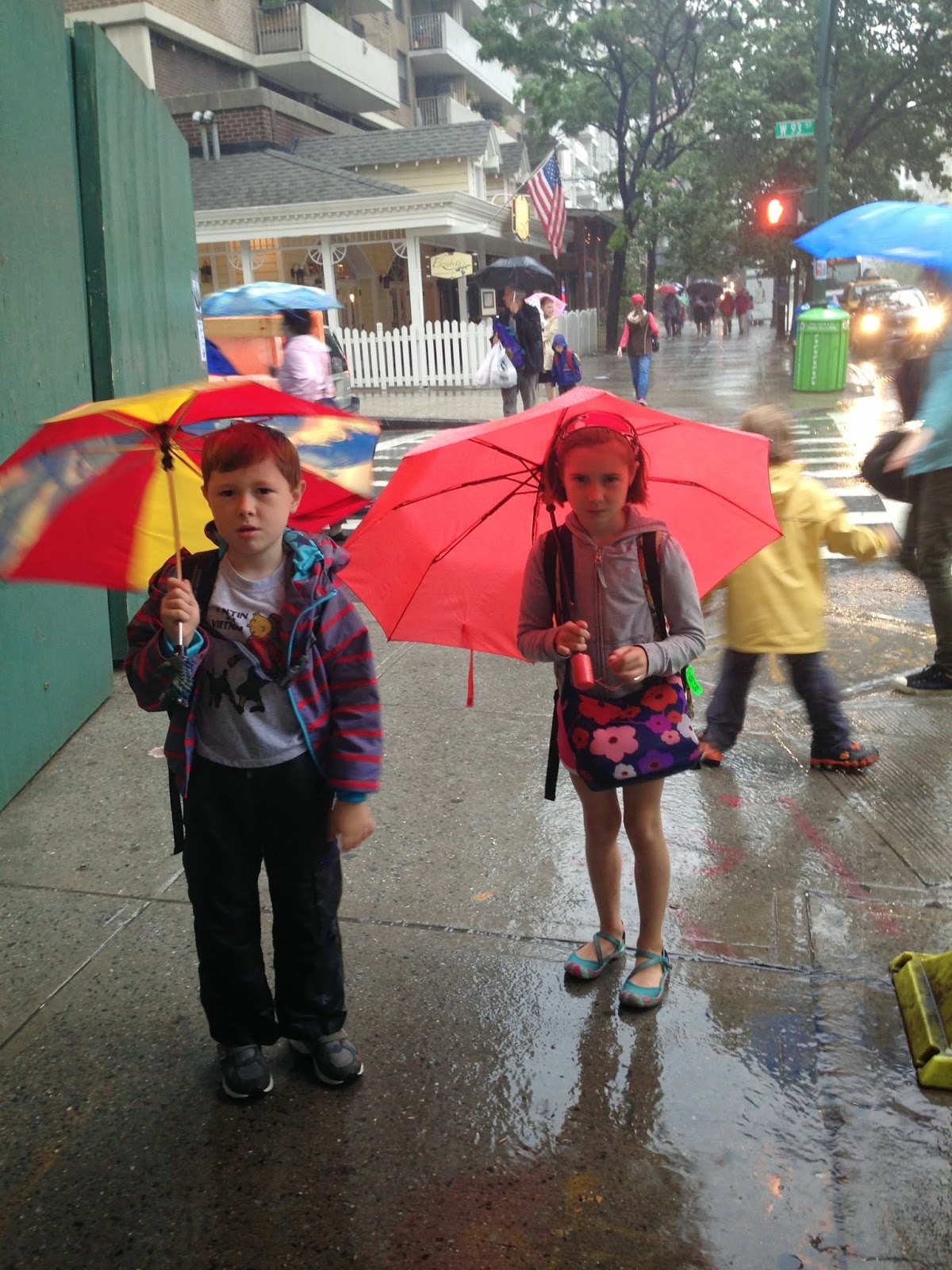