Flat Noémie and a Galaxy Far, Far Away

I started off the weekend doing something I've only done a couple times since moving here but that I should do more often - going to a museum by myself.


While the kids were in school on Friday I walked across Central Park to the Metropolitan Museum of Art.  I spent some time lounging on the roof which had just opened for the season, reading my book.  Then I headed back inside and got an audio tour to walk me through a new exhibit called Lost Kingdoms, an exhibit of Hindu and Buddhist sculptures from the 5th-8th centuries in Southeast Asia.  It's amazing how much more you get out of an exhibit using an audio tour.  Or is it because I don't have small children dragging me through the galleries at breakneck speed?

I hadn't yet mentioned to Kevin that I had spent the day at The Met (perhaps I was feeling a tinge of guilt to be luxuriating while he was slaving away at work) and coincidentally he suggested on Saturday morning that we head over to The Met.  I swear, we couldn't have picked a better location in NYC to live - walking distance to both the Natural History Museum and The Met (not to mention The Guggenheim, New York Historical Society, Central Park...).  Ella has been working on a project for class about Chinese clothing and fashion and we had hoped to get some pictures of her in front of some robes and clothing from Ancient China at the museum but didn't have much luck.  However, we did have another reason for wanting to check out the museum...

We have a friend visiting us this week.  Well, not a human friend.  A flat friend. 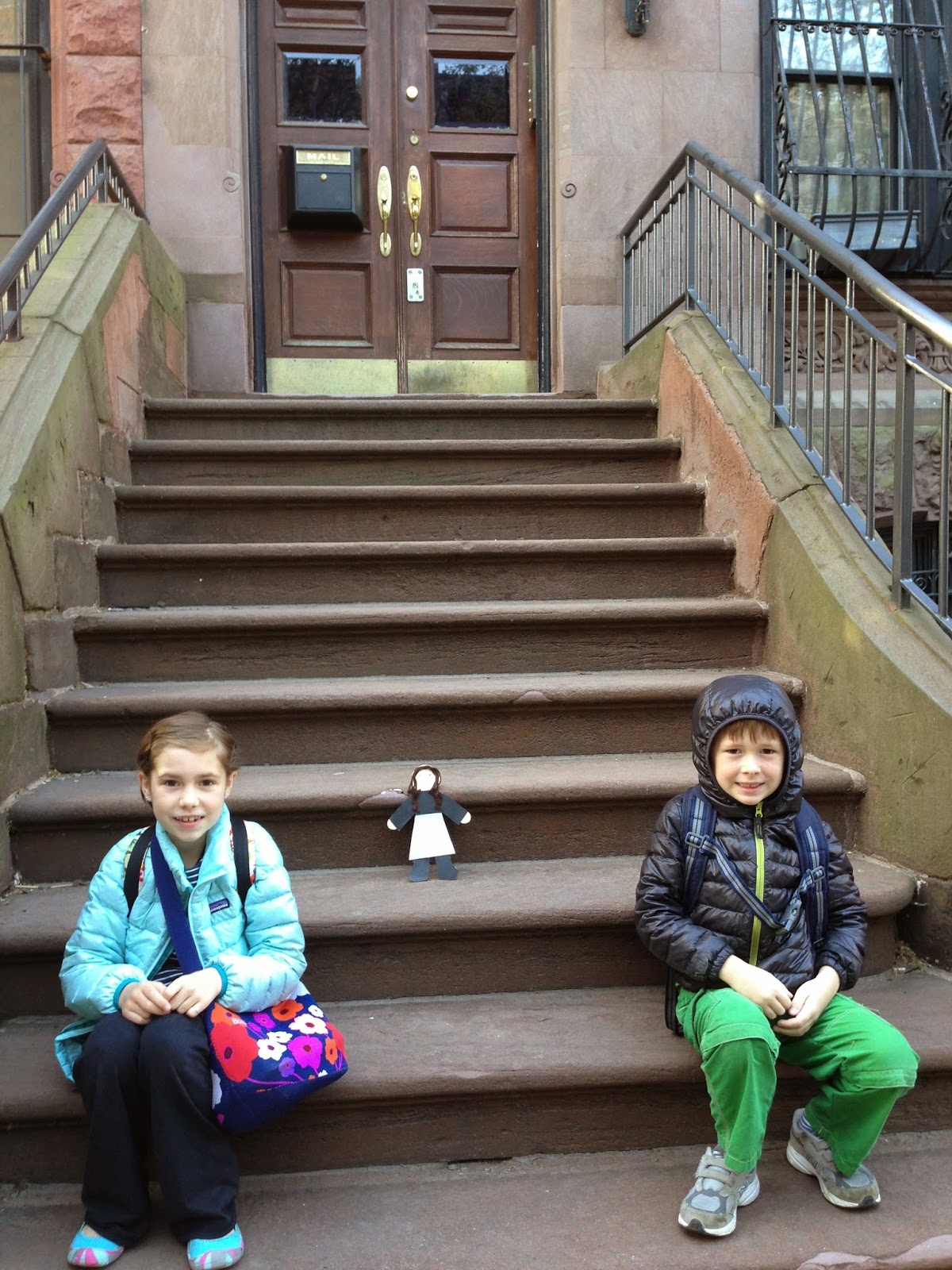 Our good friend Noémie in California sent us Flat Noémie to show around New York City for a week or so.  We will send back Flat Noémie with photos and stories for her to tell Noémie's second grade class.  We strive to show her a good time. 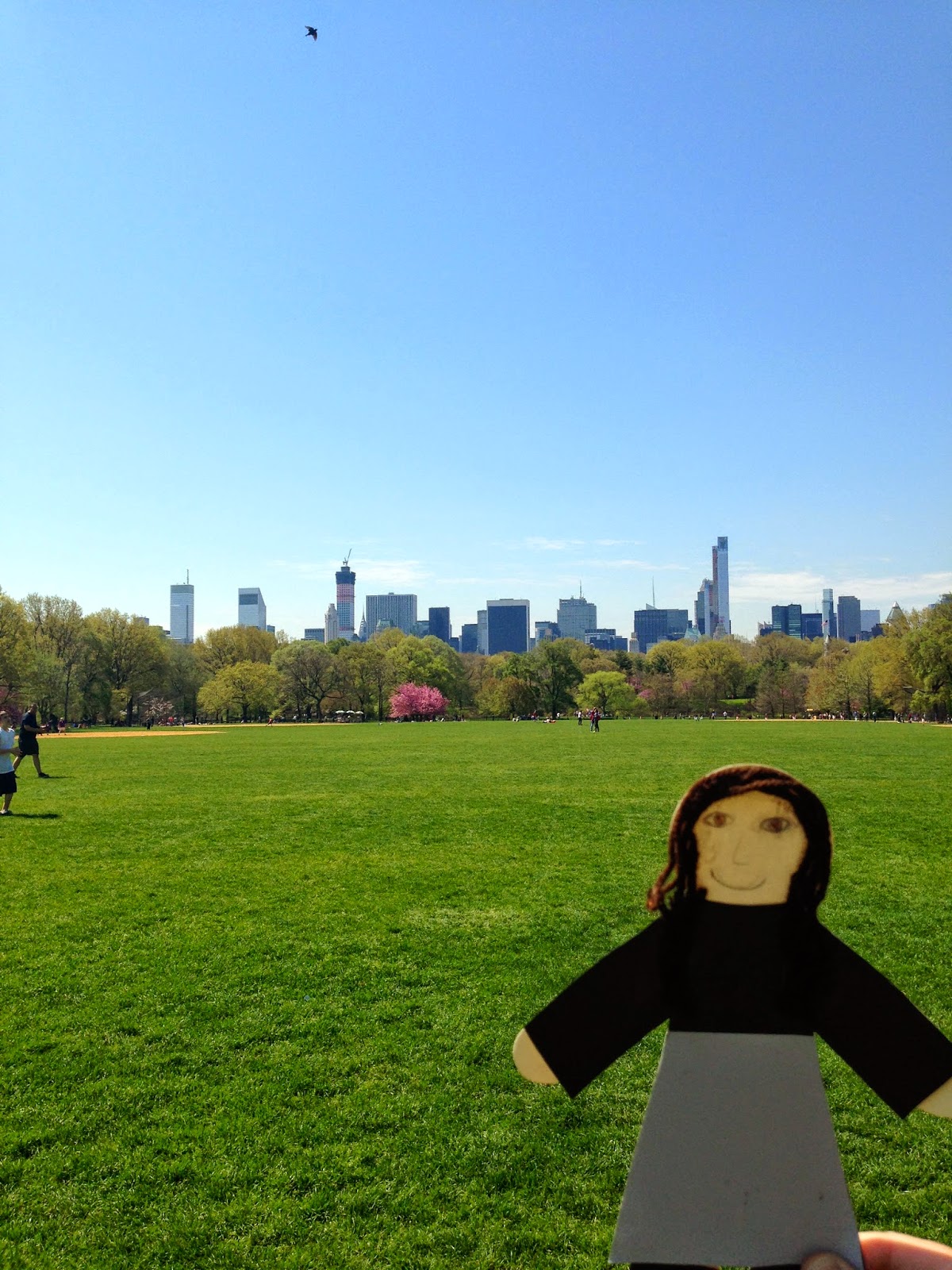 She was impressed by The Great Lawn in Central Park. 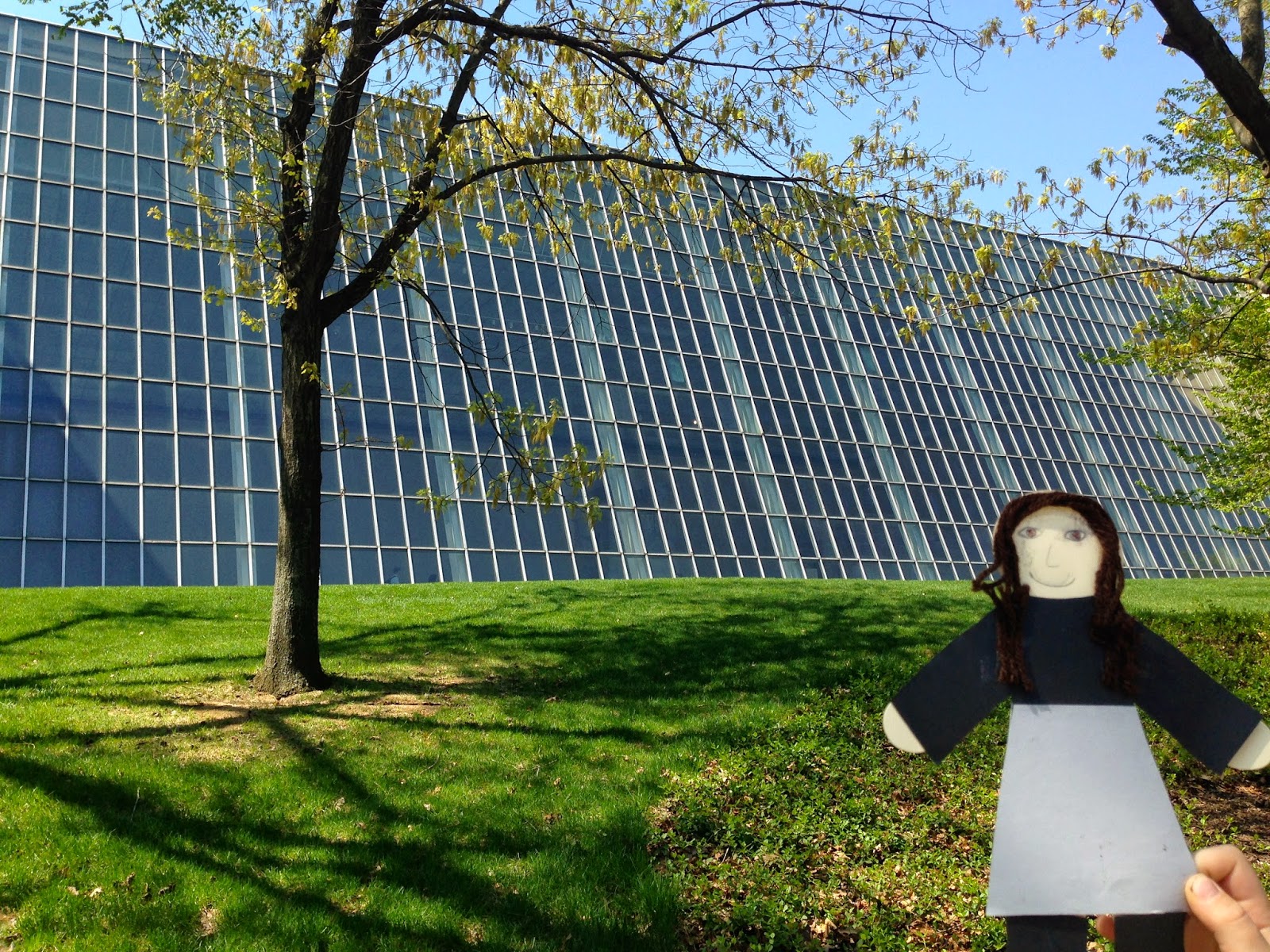 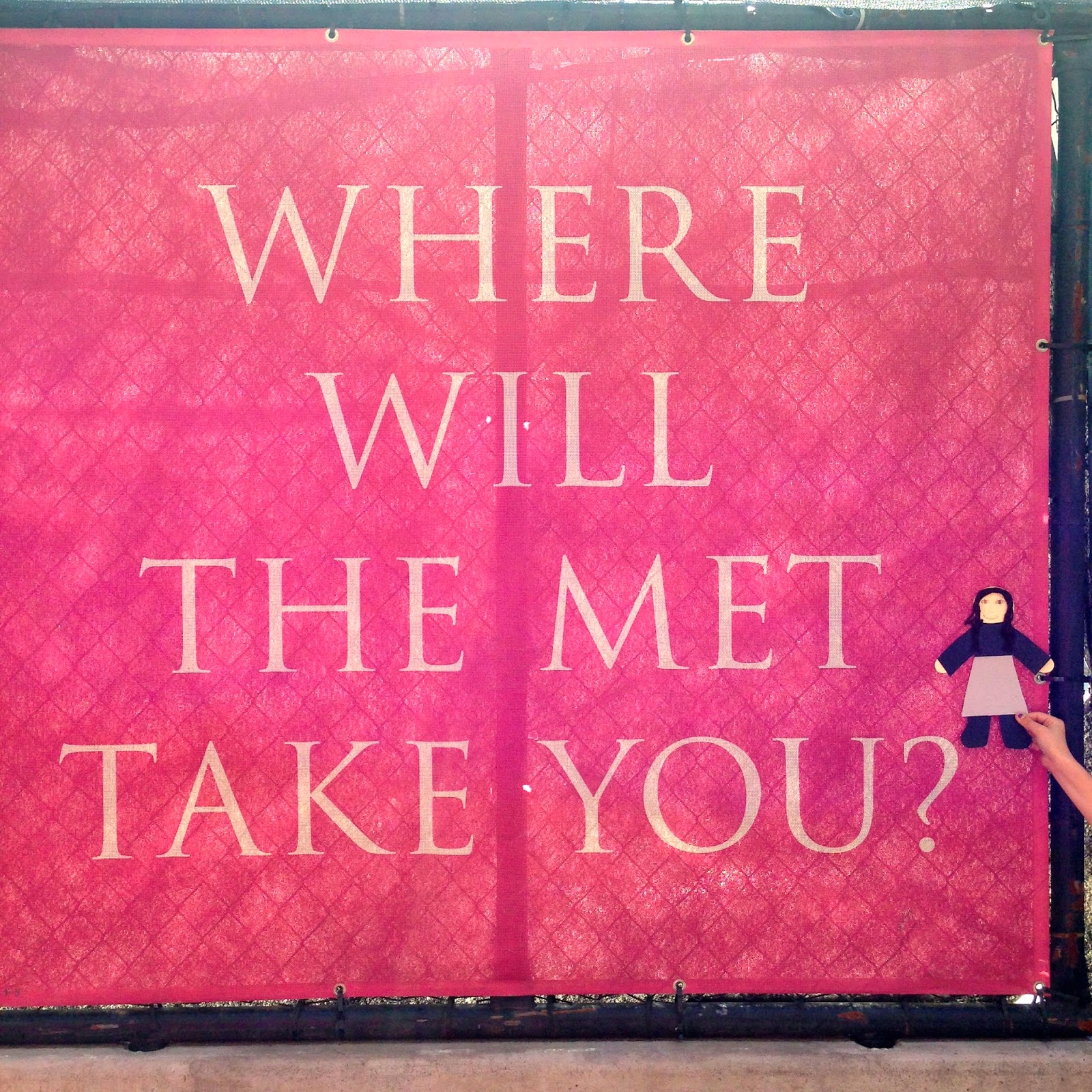 And then of course we had to show her our favorite art at The Met. 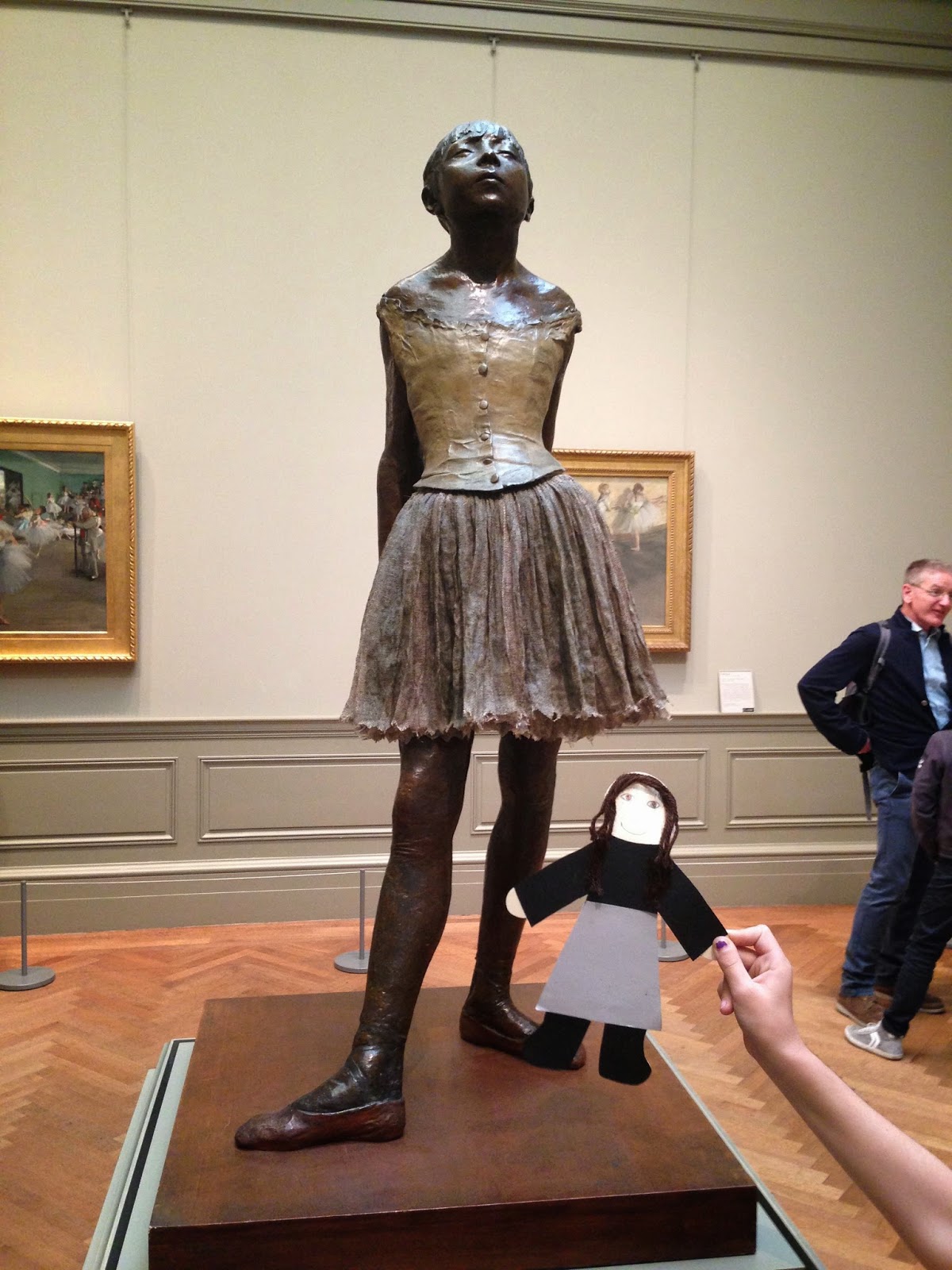 One of Ella's favorites, a Degas sculpture of a ballerina 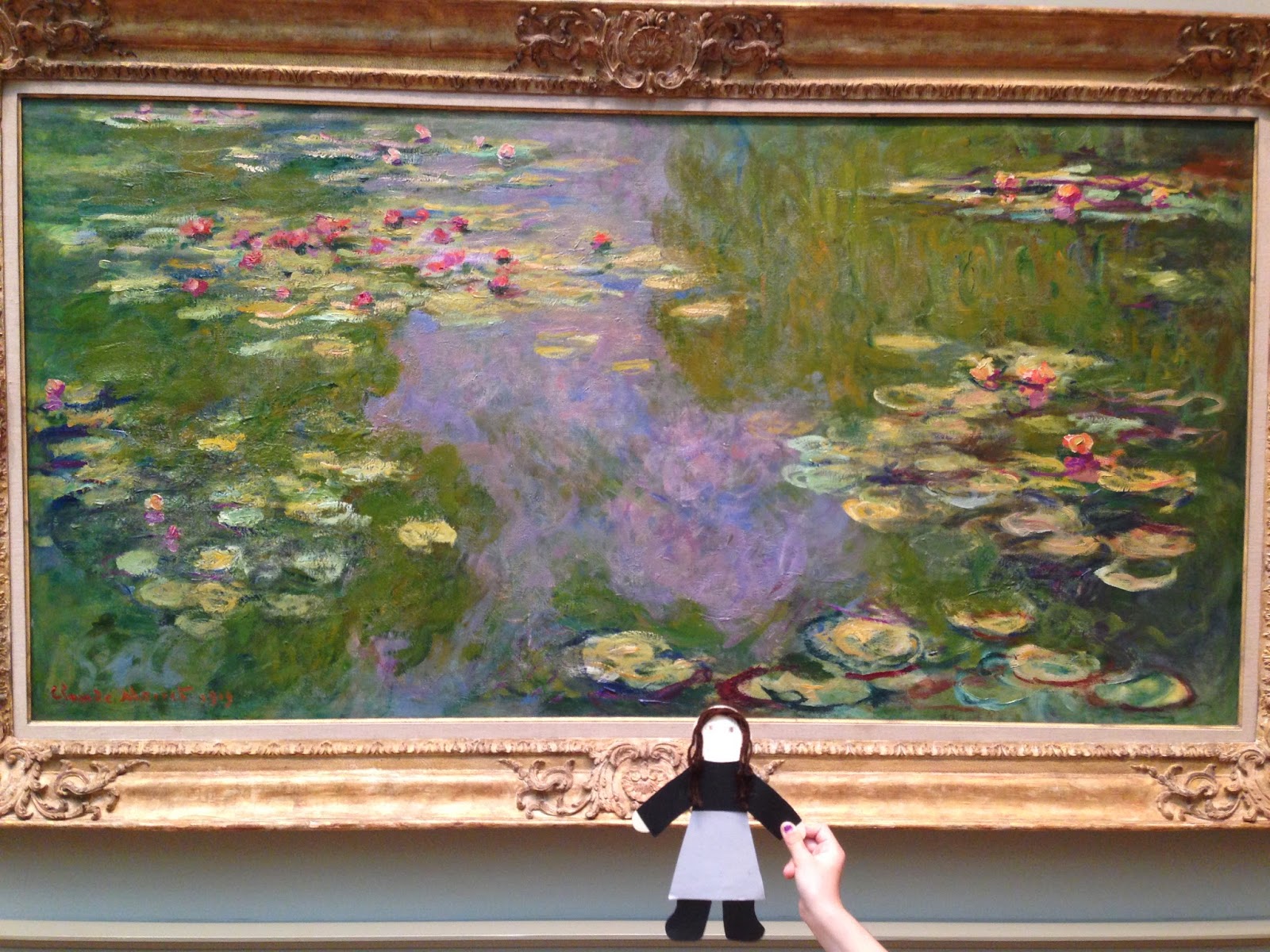 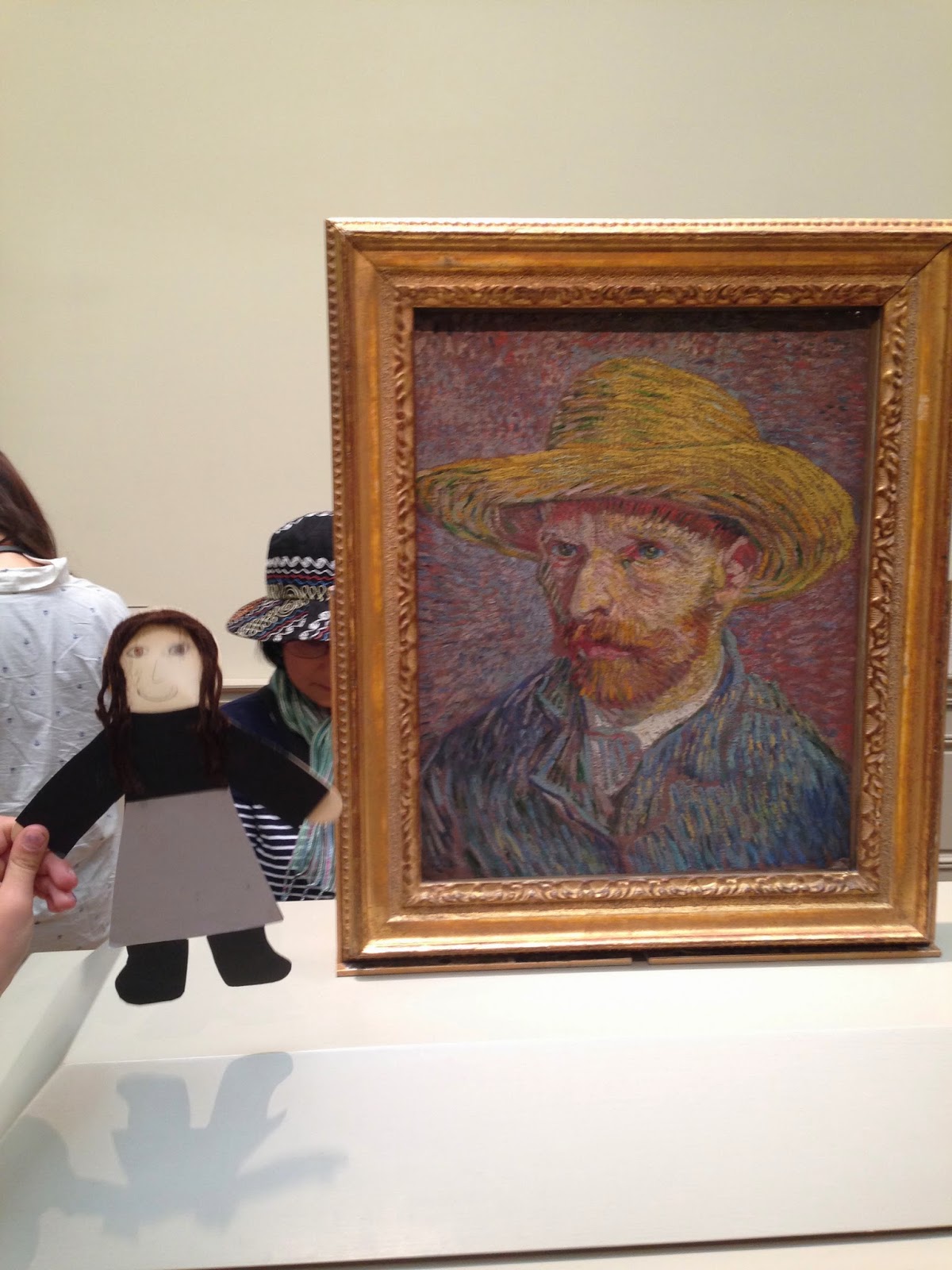 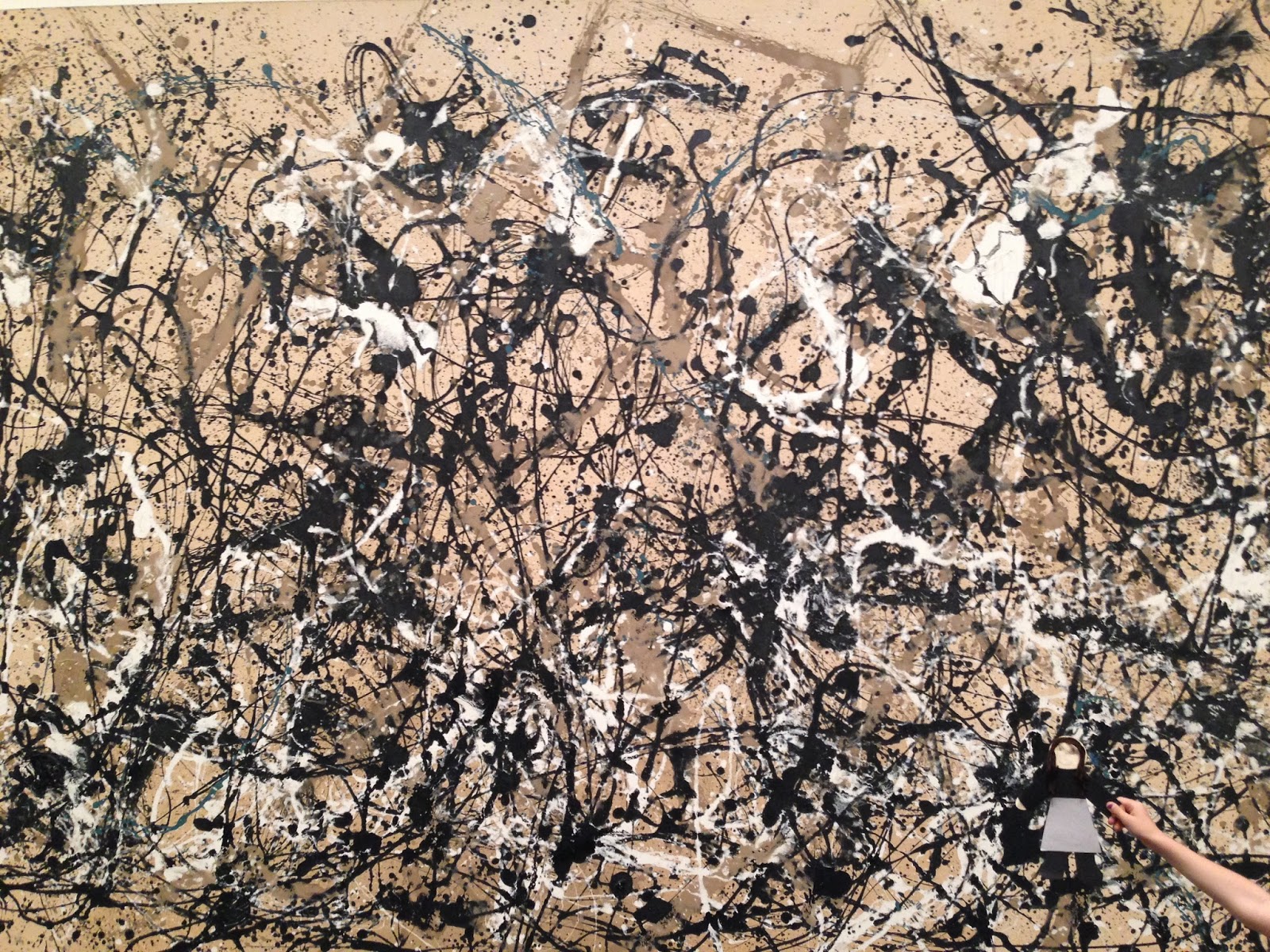 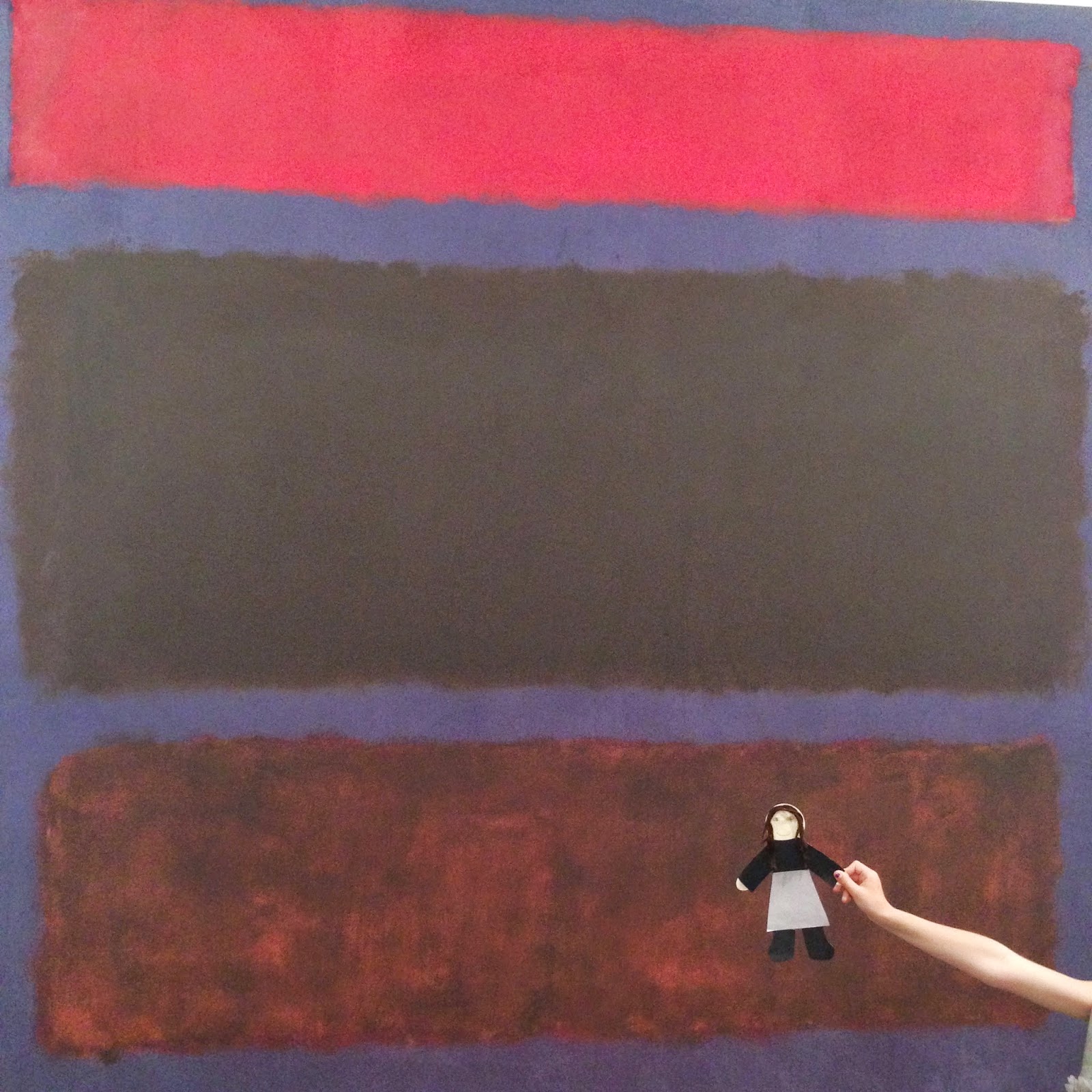 She liked the simplicity and modernism of Rothko 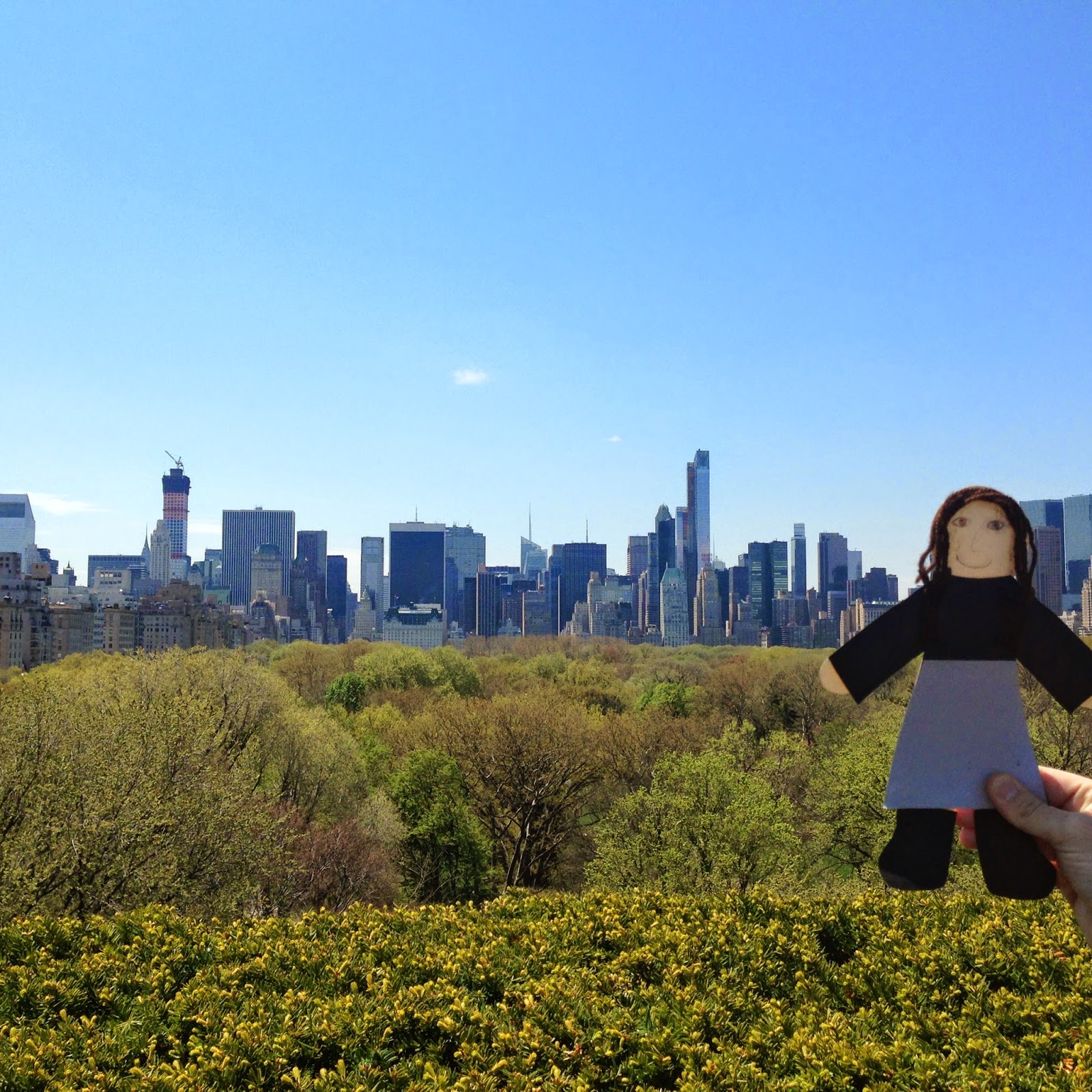 And then she picnicked with us on the roof

We sent Flat Noémie back to our apartment to take a nap while we hopped a train north, out of the city. 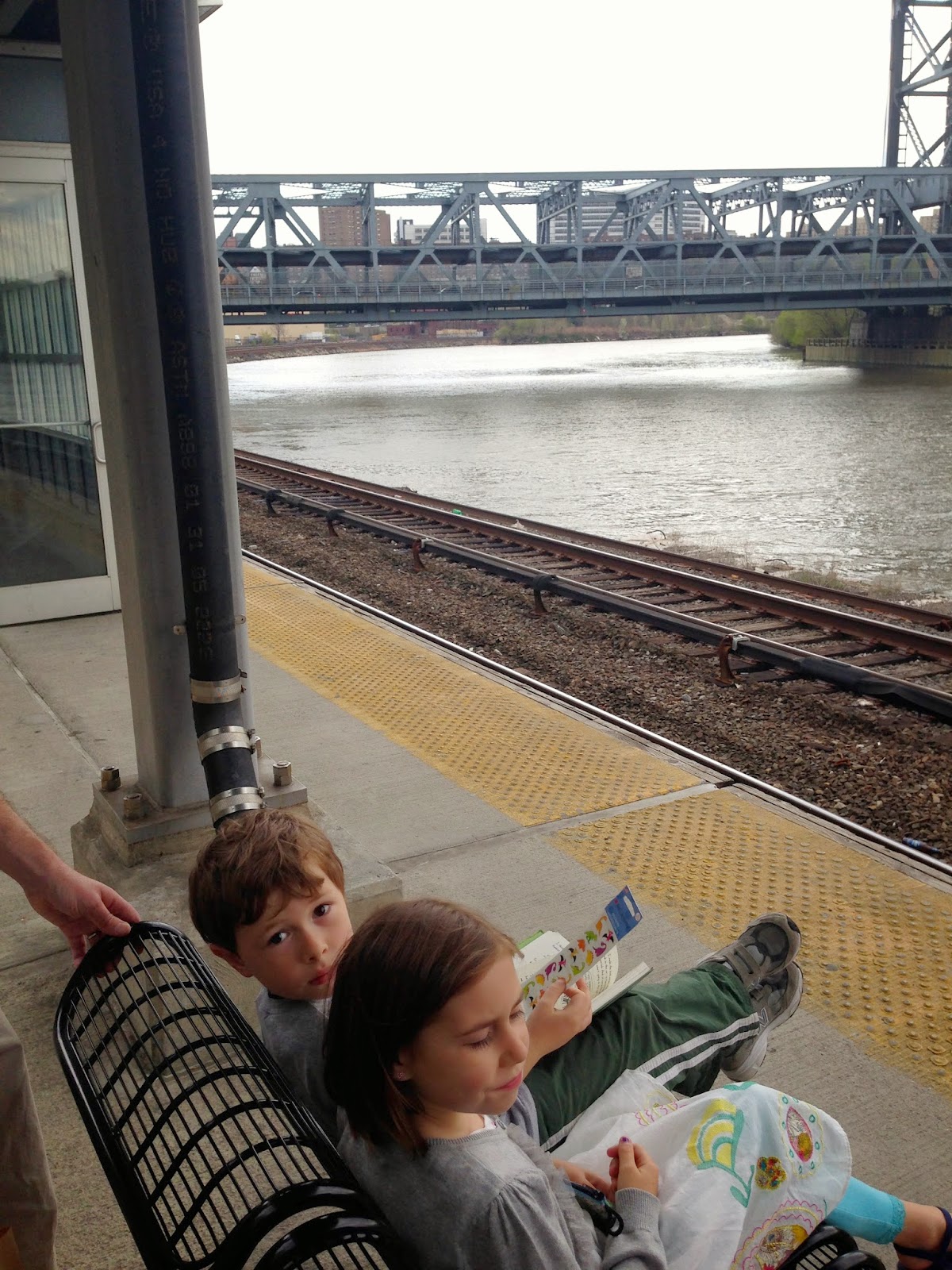 Ella's good friend Maeve and her brother Kiernan had their First Communion Saturday morning and were celebrating with a picnic that afternoon up at a park in the town where their grandparents live, Irvington.  It is a lovely 30 minute train ride north out of the city, along the Hudson River.  We had a great afternoon playing soccer and eating and chatting with friends.  And it's always so nice to have some time out of the crowds and congestion of New York City. 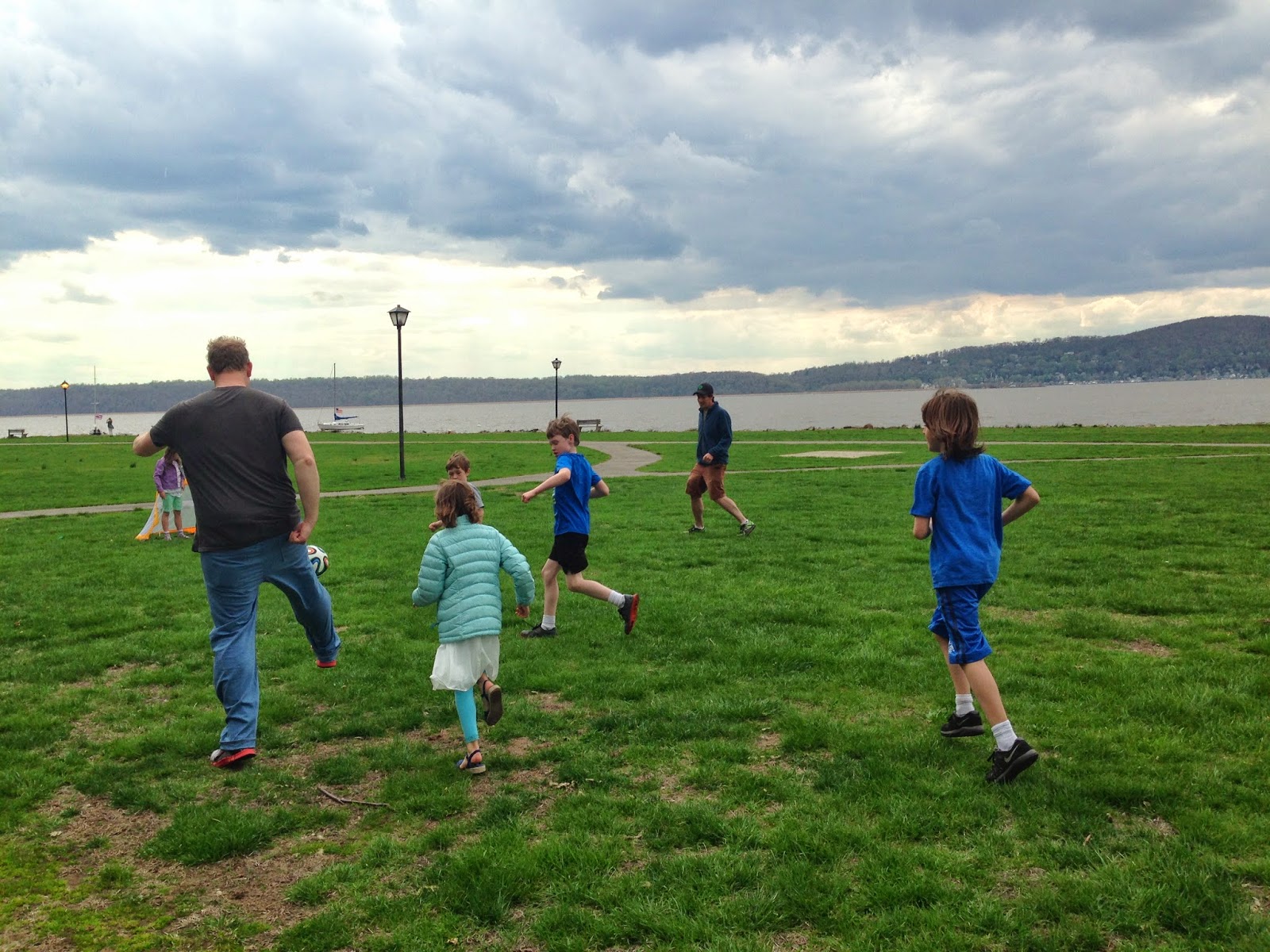 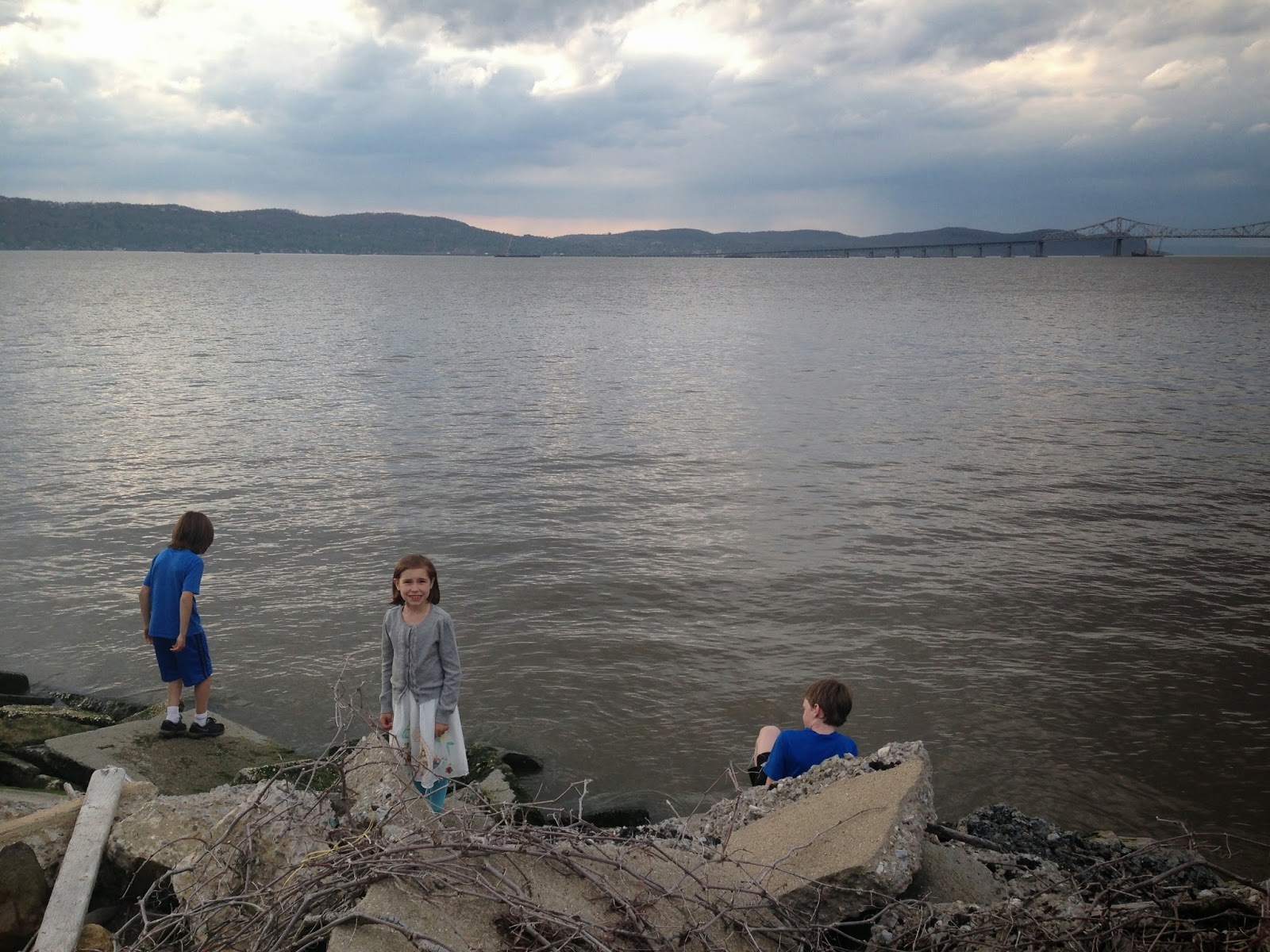 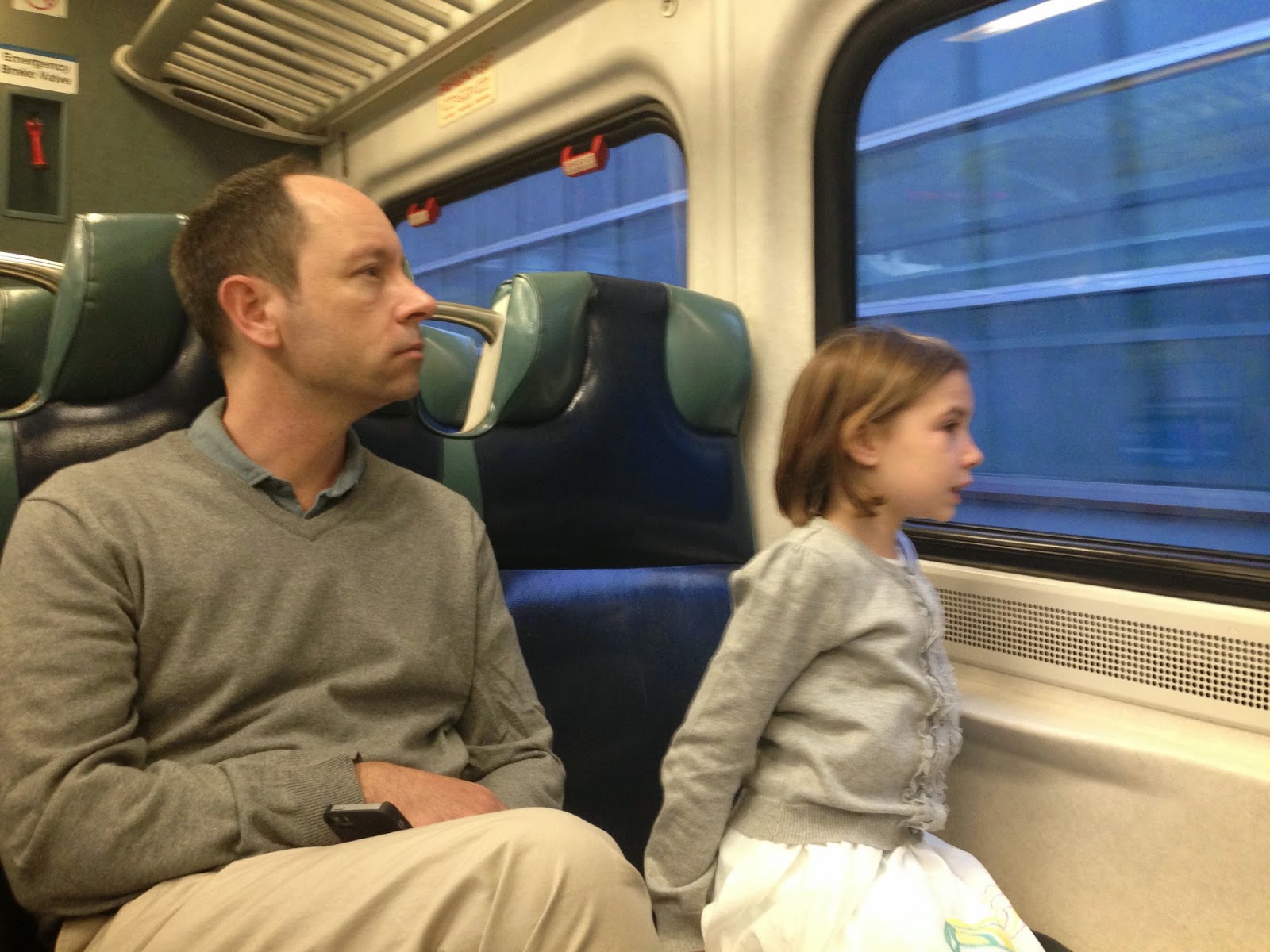 On our way home we walked around Grand Central Station for a bit.  It's so much more impressive to arrive at Grand Central by train and then emerge from the tunnel into the majestic hall.  I can only imagine what it was like in the 1940s when everyone would have been dressed to the nines.  We found a new hidden bar/dinner spot but didn't stay - it was getting late.  But Kevin and I decided that we needed to rendez-vous there sometime after work.
We also stopped by the Whispering Arch before we left.  There is a spot under an overpass in Grand Central where the acoustics are just such that if you whisper into the corner and someone is standing in the opposite corner (a good 30 feet away), you will hear them as though they're whispering right into your ear, regardless of how noisy the train station is (and it's always noisy). 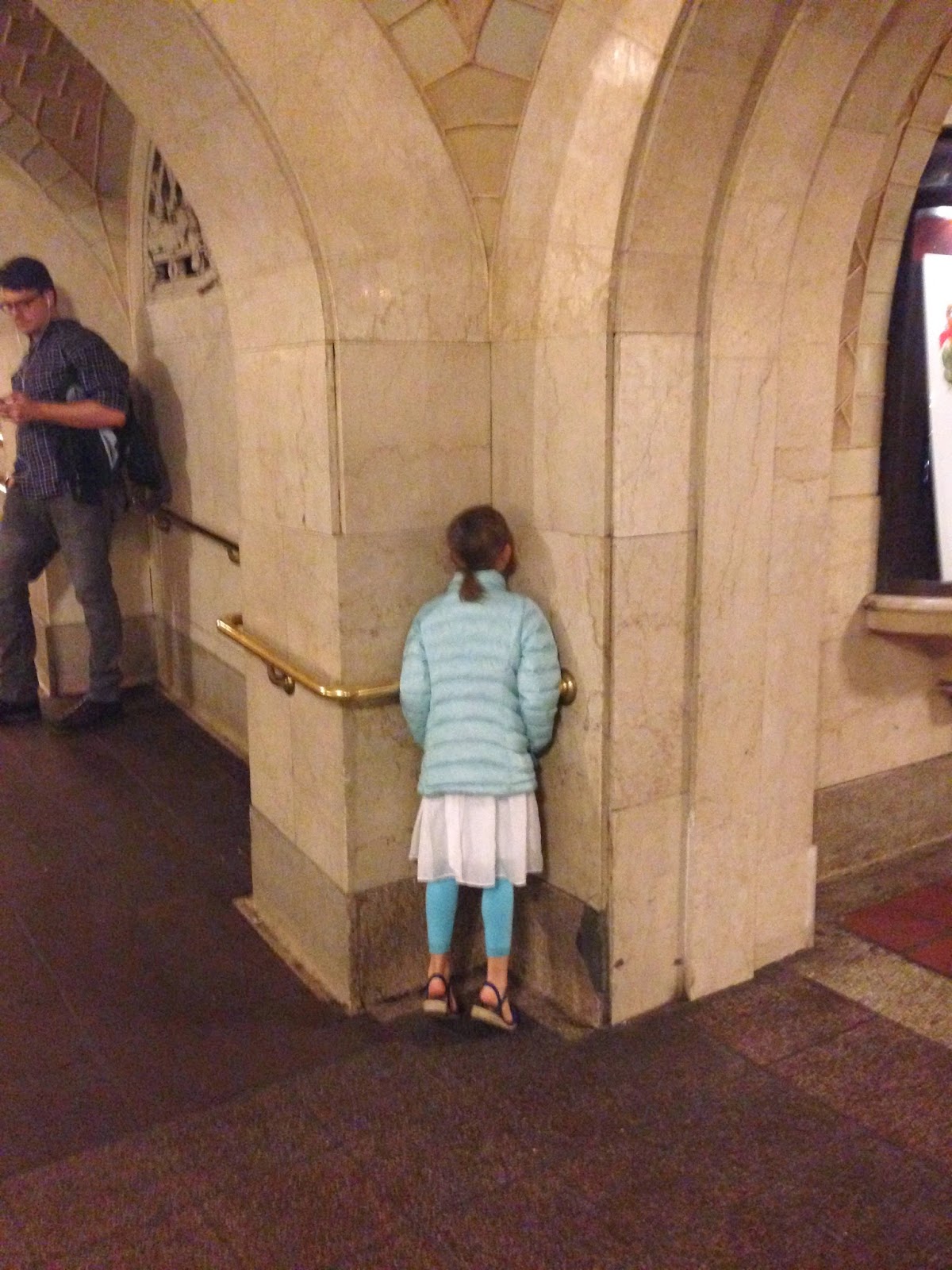 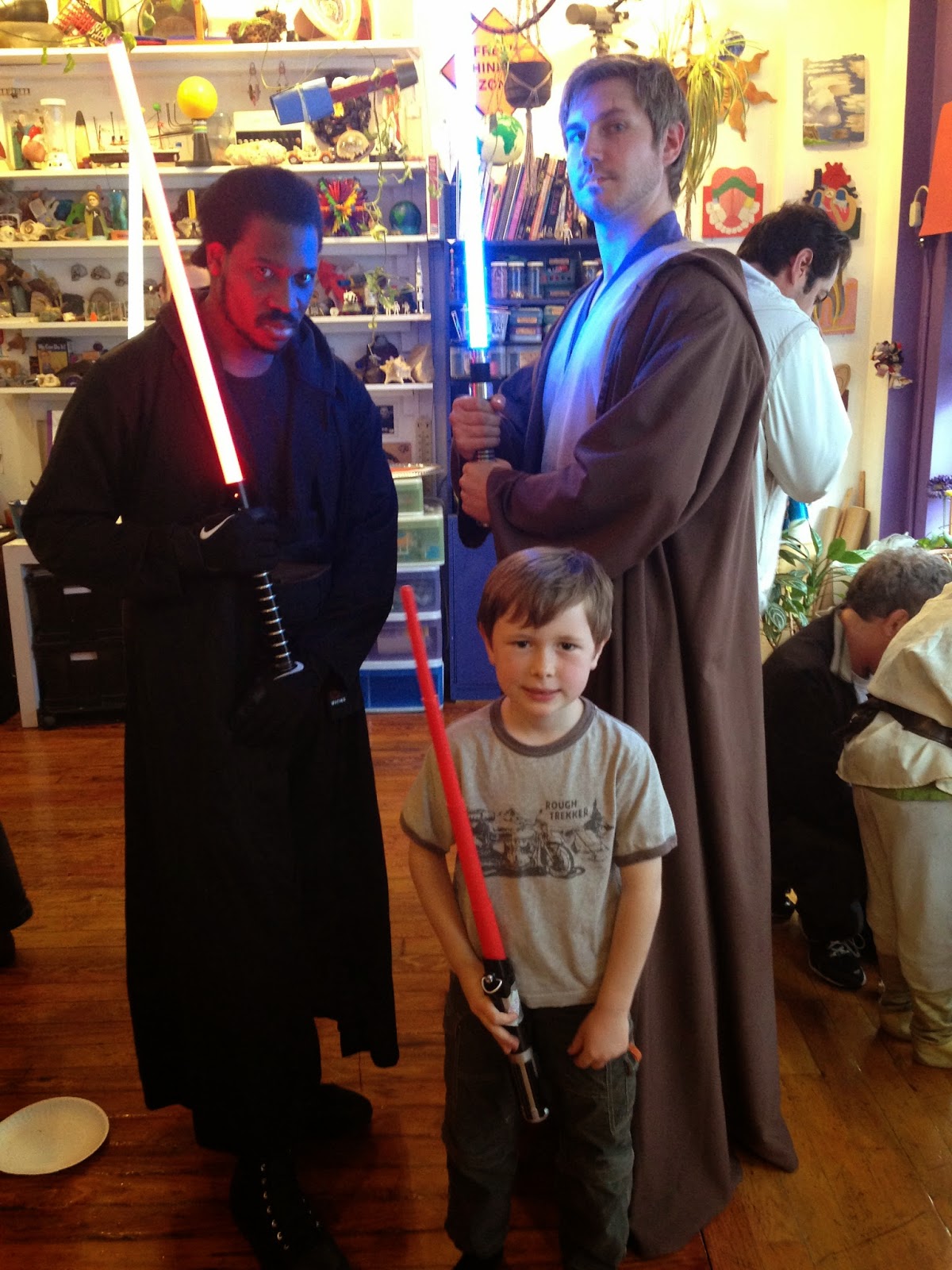 She brought in real Jedi Knights, trained at the Jedi Training Academy to teach the kids a thing or two with their lightsabers.  They also learned a few useful things too, like how asteroids create planets (the kids all got to make their own planets by squishing asteroids (Starburst candies) together).  They learned about force and motion, how storms work on other planets, and the Harvest of Tatooine (I'm not enough of a Star Wars aficionado to explain that one to you).  As they do every time they go to a Science Teacher Sarah class, they spent the entire subway ride home speaking over each other at warp speeds to tell us every detail of the class.  I rarely see them happier than after one of her classes.

While the kids were partying it up in science class, we joined our friends Tom and Alina (who also dropped off their son Luke at Sarah's) for drinks and conversation.  Life is pretty good when you get to spend a leisurely Sunday afternoon hanging out at an outdoor table in a pub in the Village with good friends while your kids are learning and having an equally great time.  Science Teacher Sarah Sundays are a win-win for our family. 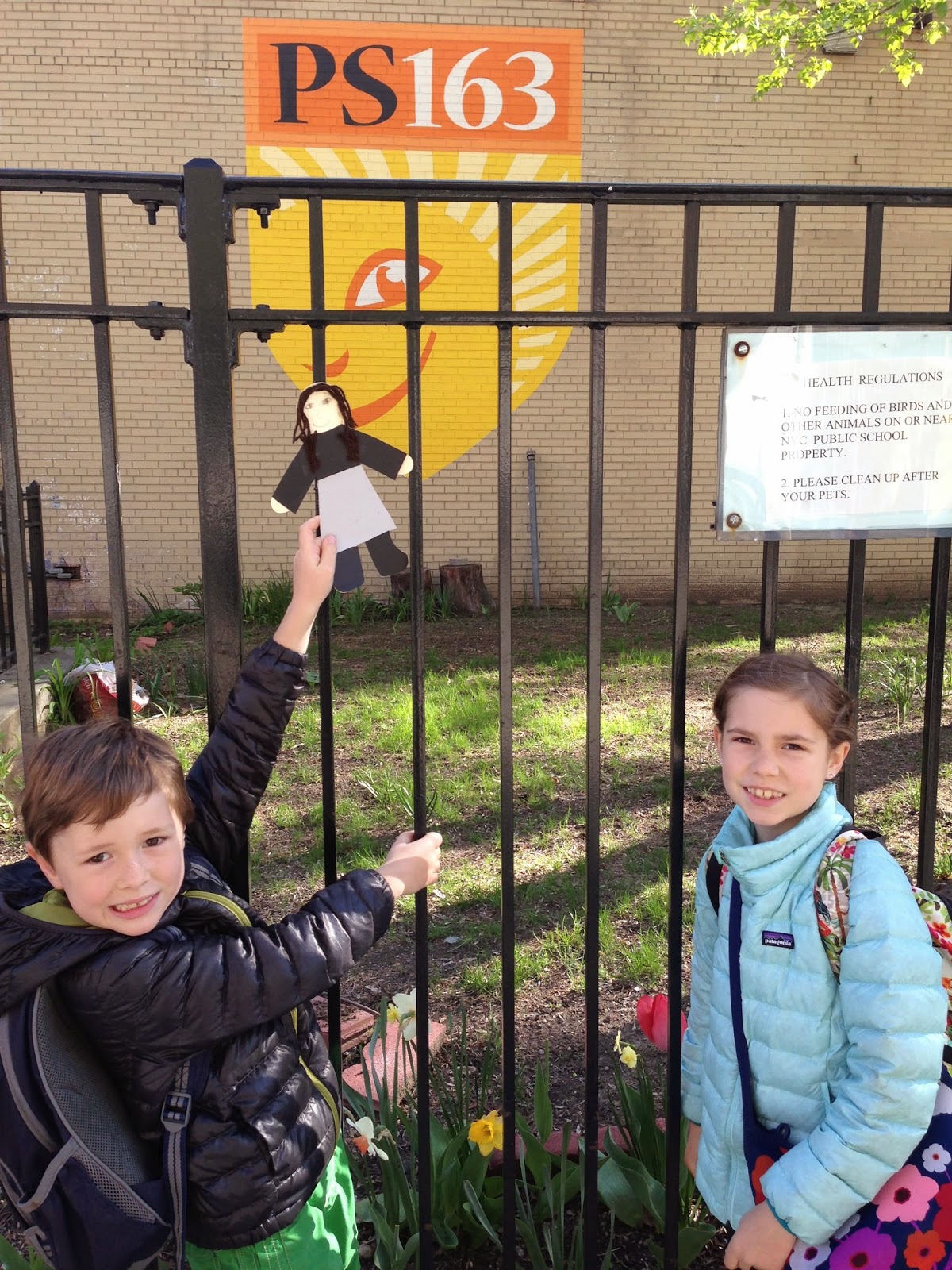 Flat Noémie is having a field trip today to school with the kids.  More on her adventures this week.