It's Monday again and again, Mother Nature seems to know just when to pull back on the bad weather.  After several days of rain last week, Saturday and Sunday were beautiful and sunny.  Not terribly warm, but at least we could be outside and get some sun on our faces.

But first, I last left you when I was heading off to Holden's performance in his class for a weekly drama class I had no idea he was taking.  The teacher announced that no photos or videos would be allowed so that the parents would be "fully present" during the performance.  Holden immediately flashed me a sympathetic look knowing how traumatic this news would be for me.  I did get to take a photo after it was all over though. 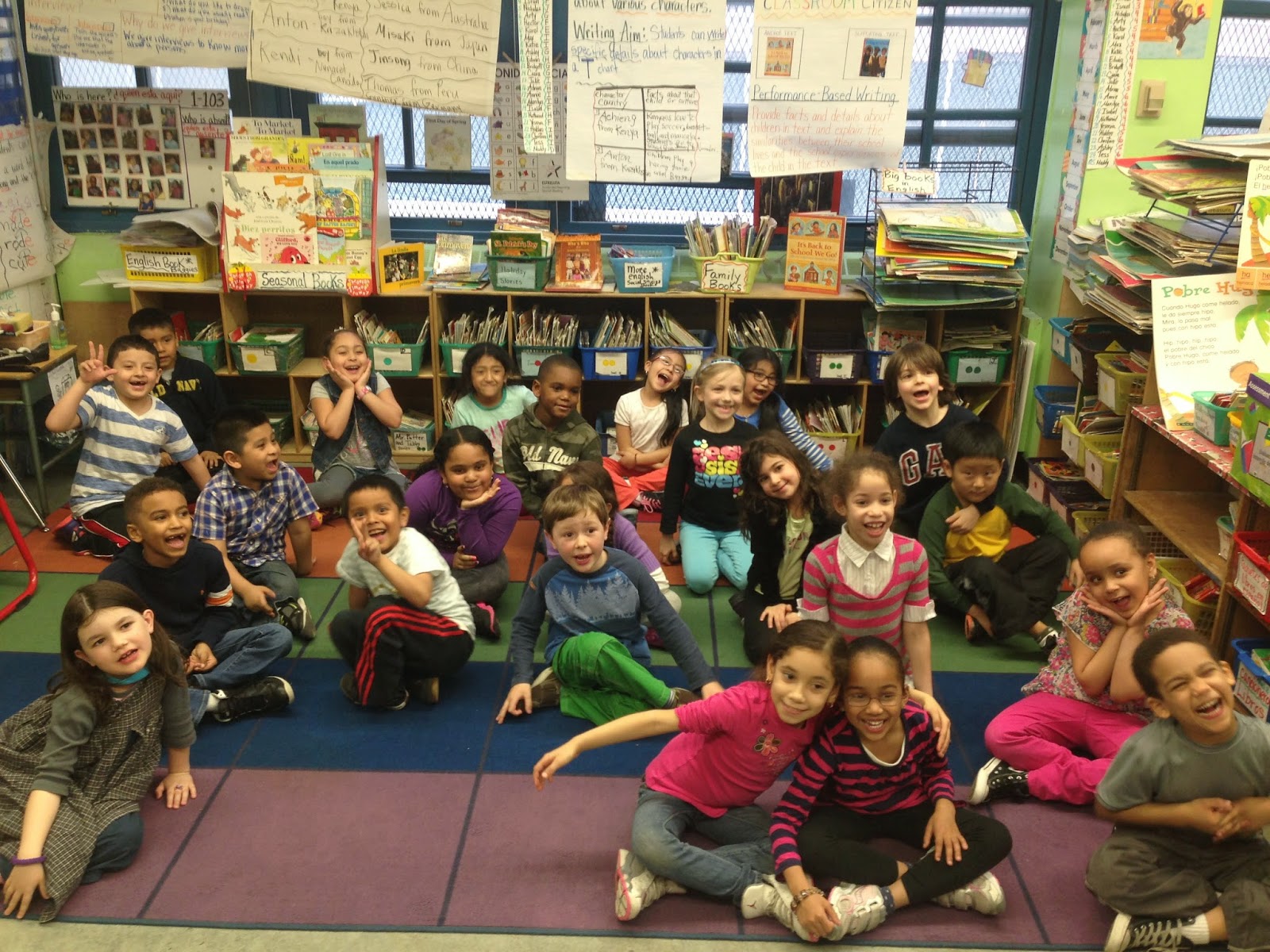 Friday night was their first, and possibly their last, chess tournament. 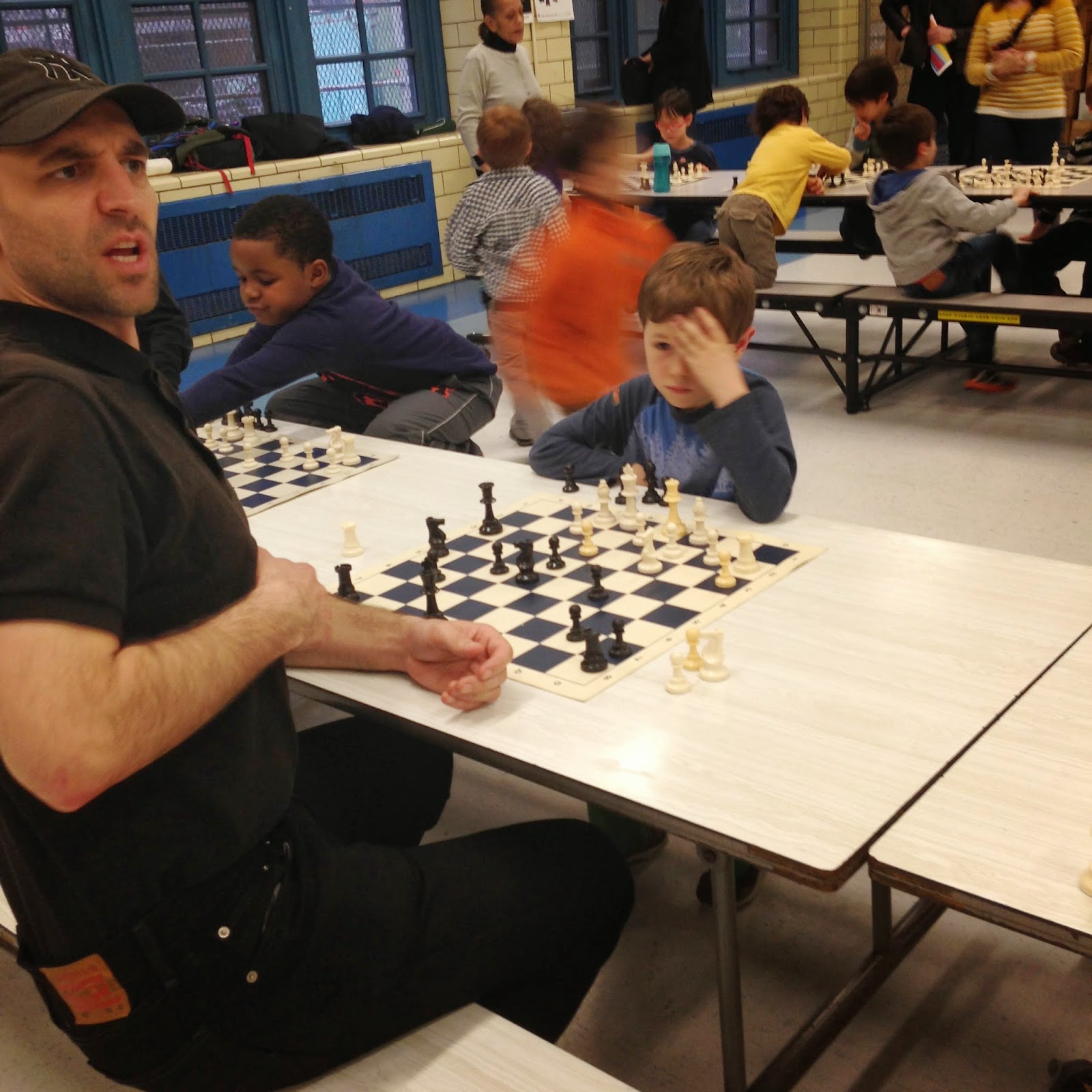 Don't let the trophies and medals fool you.  In the Rookie Tournaments every participant gets one.  I'm not thrilled with that idea - not only because the kids didn't have to work for it, but also because Ella admitted that the only reason she agreed to sign up for the tournament was to get a trophy.  At $30 a kid, we probably won't be doing more of these.  They can play each other at home for free.

Soccer started back up again for the kids on Saturday and then Holden get to go to a soccer birthday party Saturday afternoon. 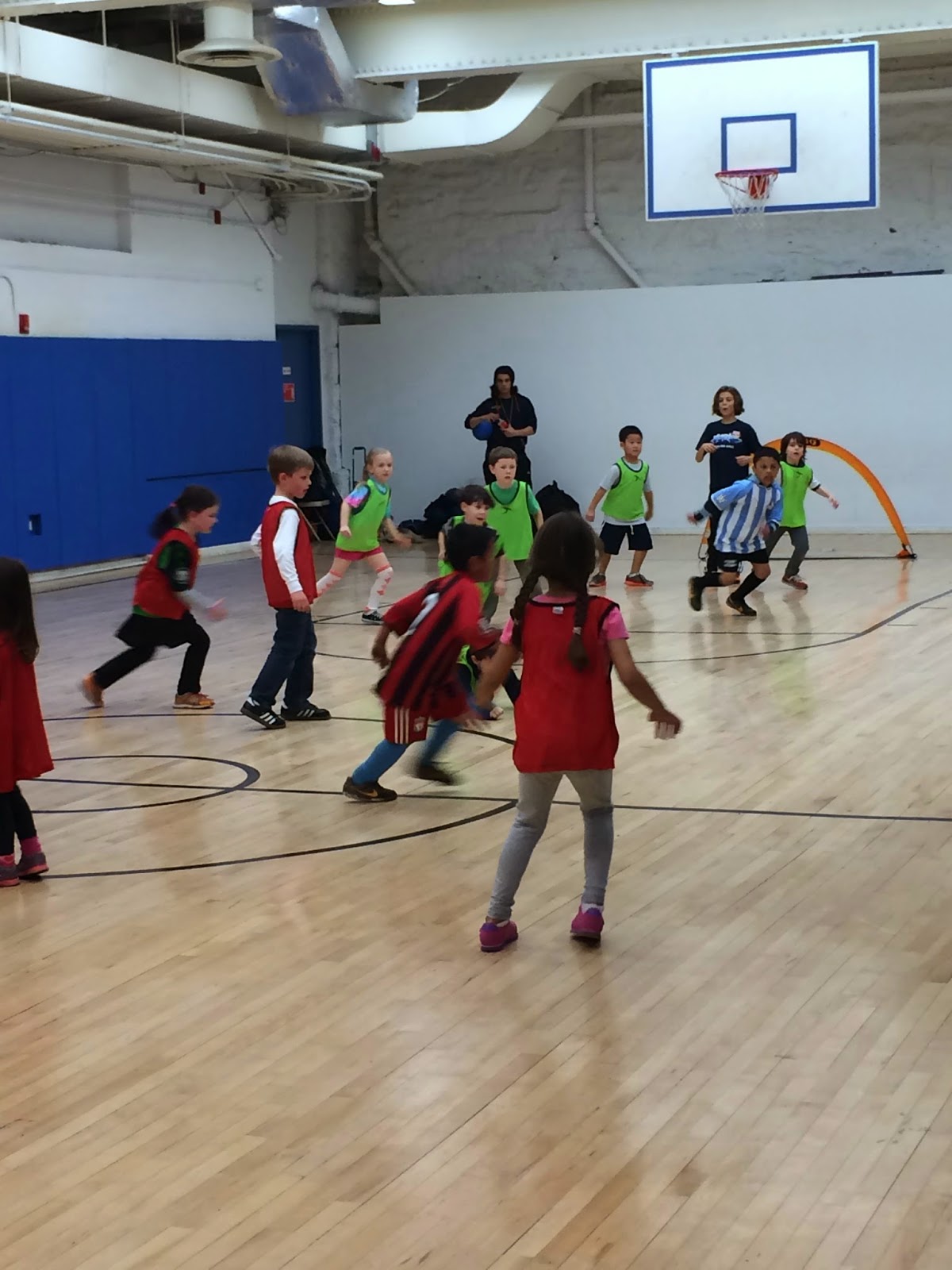 I was really happy for him because he rarely gets to do something that is all his and has nothing to do with Ella.  This is his first birthday party since moving to New York and he was so excited.

On their way to the birthday party Kevin and Holden dropped into the Natural History Museum with a mission.  We recently re-watched the movie Night at the Museum which is set in the Natural History Museum.  The movie was filmed on a Hollywood set, but one item from the movie is really in the museum - Dum-Dum, an Easter Island Head.  And somehow we've never been able to find him there.  Unbelievable, I know, considering how much time we spend there.  So Kevin and Holden got some help from a docent and finally found Dum-Dum. 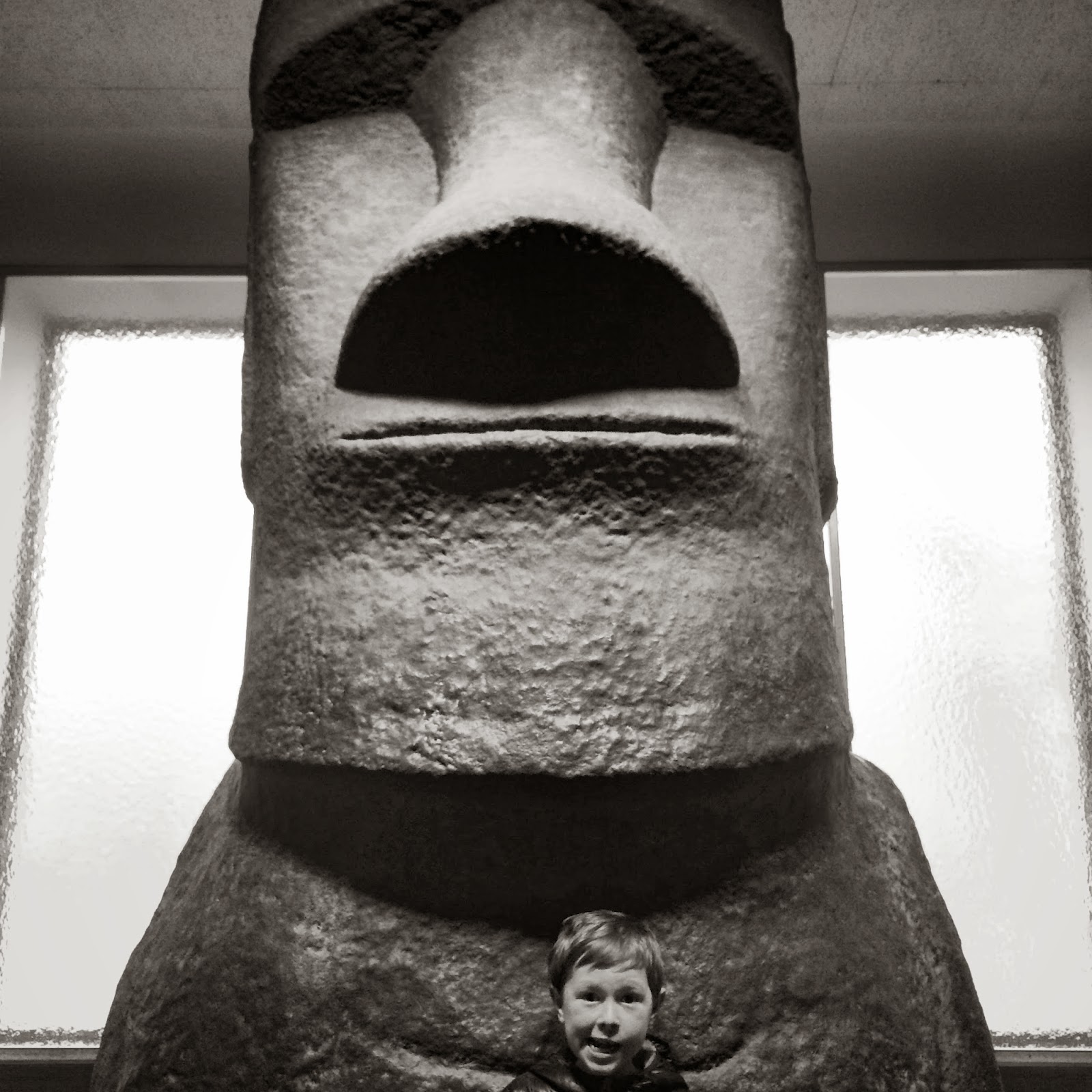 While the boys we're finding Dum-Dum and celebrating a 7-year-old's birthday, Ella and I joined Maeve and her mom Sharon at the New York Historical Society for one of their Spanish tours.  This month the tour was of watercolors by the famous artist-naturalist John James Audubon (as in the Audubon Society). 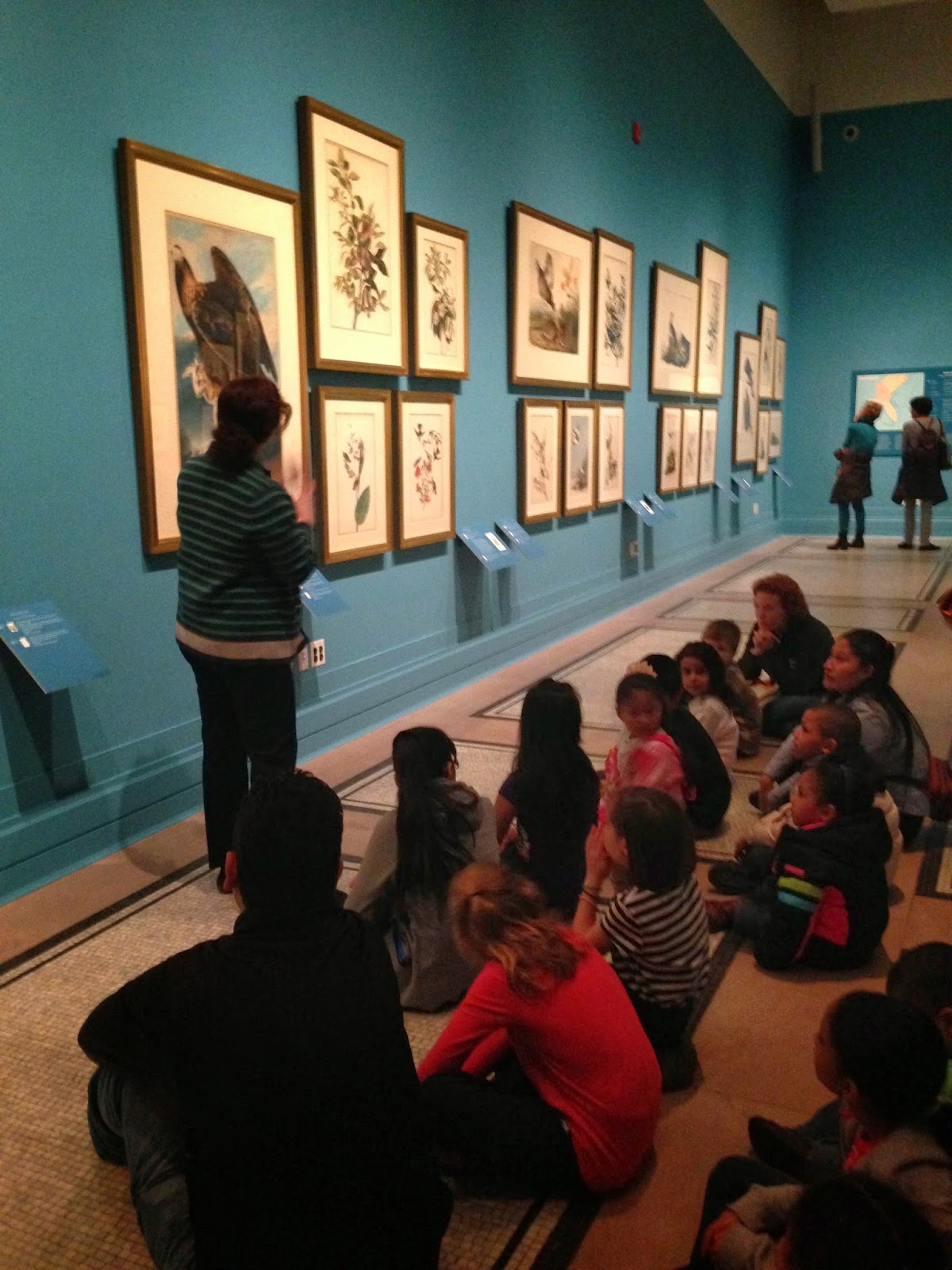 At first Ella wasn't very excited to be going when she heard it was going to be in Spanish (more school, she thought), but once the tour started I think she forgot it was in Spanish and just enjoyed seeing the paintings of birds.  They even got to finish the tour in the art studio creating some bird art of their own. 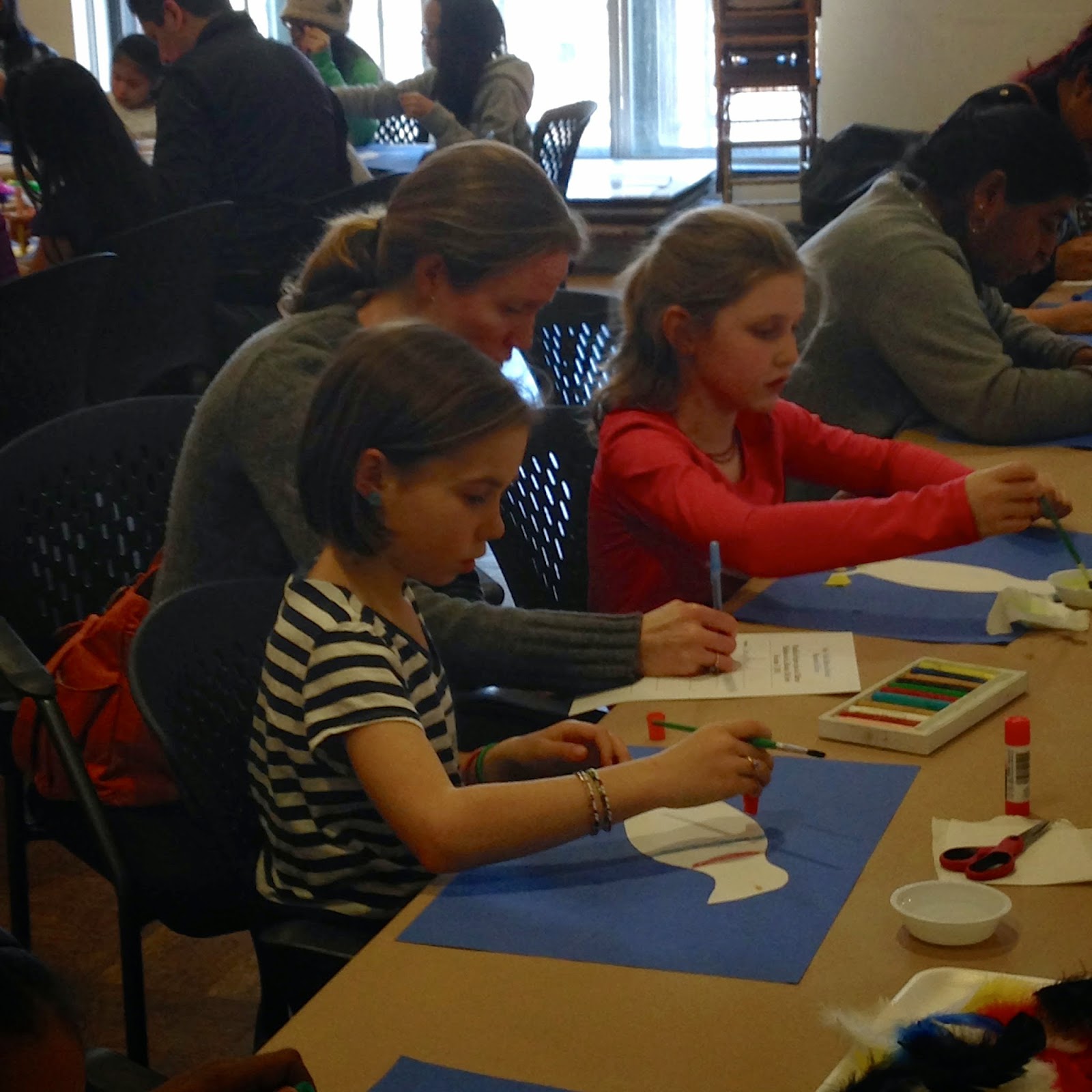 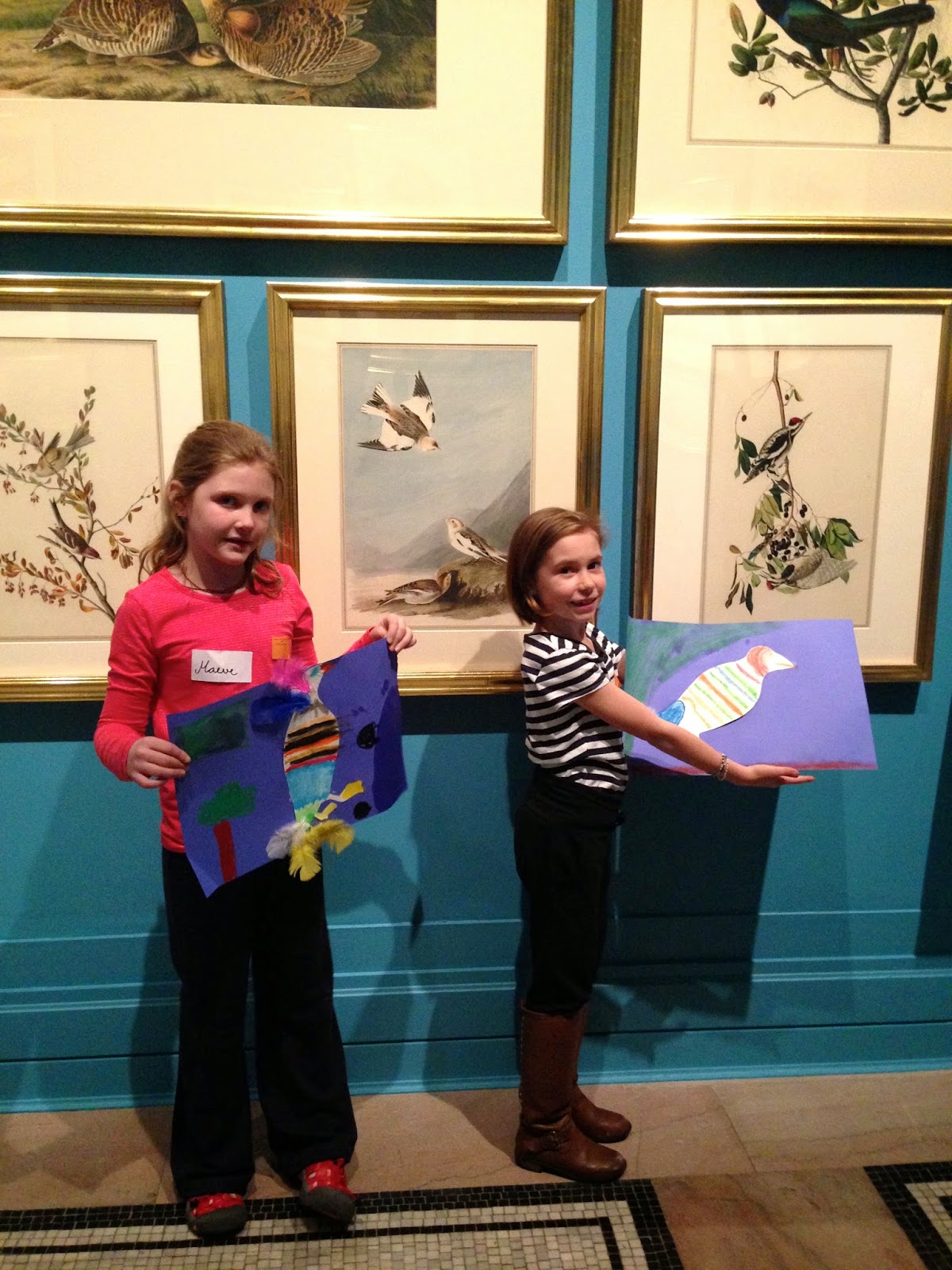 Down on the first floor they were having an exhibit on the Civil War.  This nice soldier was describing in detail to the girls how a bayonette works to remove vital organs from an enemy soldier. 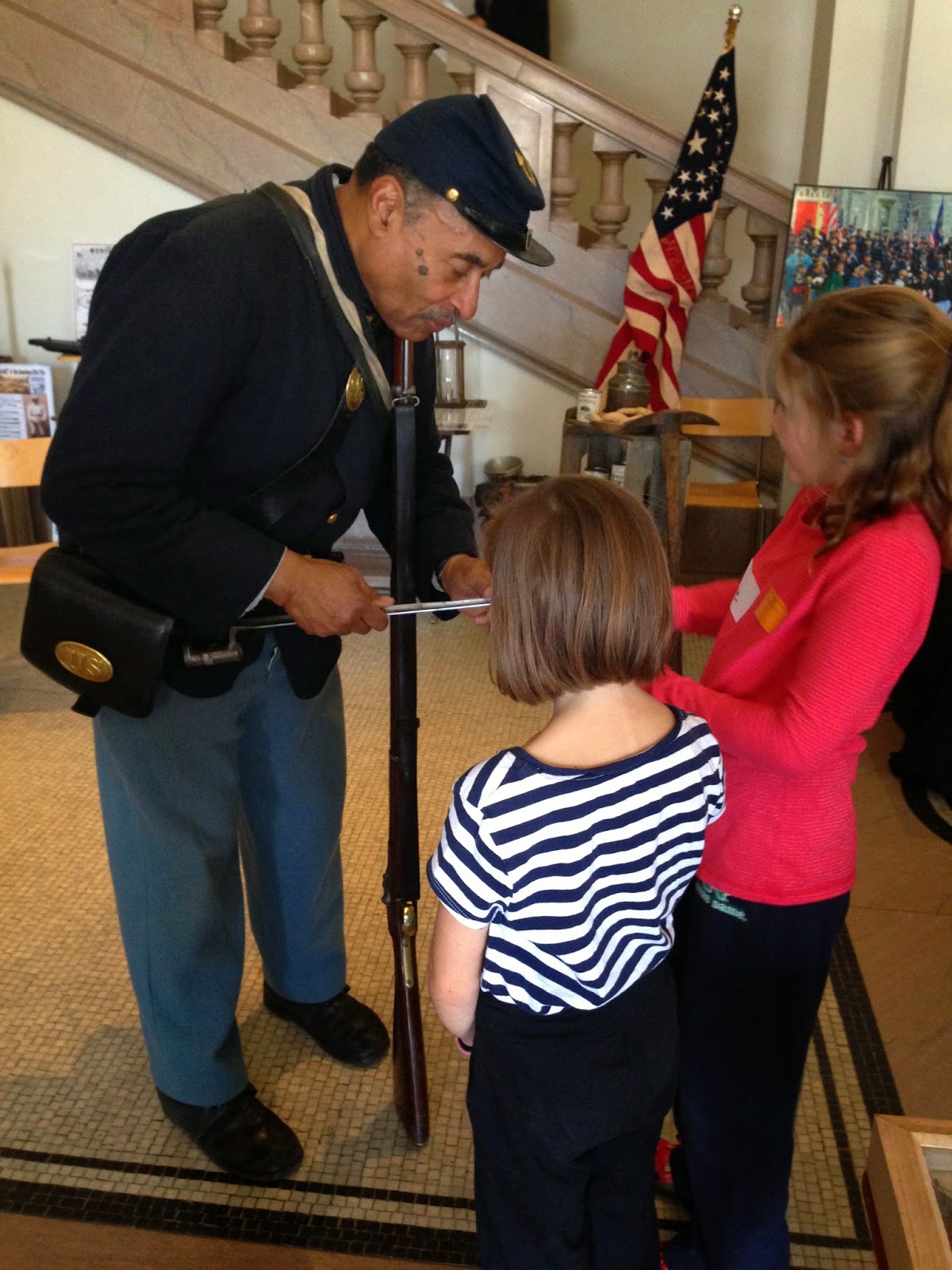 I was craving some good Italian food that night so once the two halves of our family met back up with each other we hopped the subway down to Little Italy. 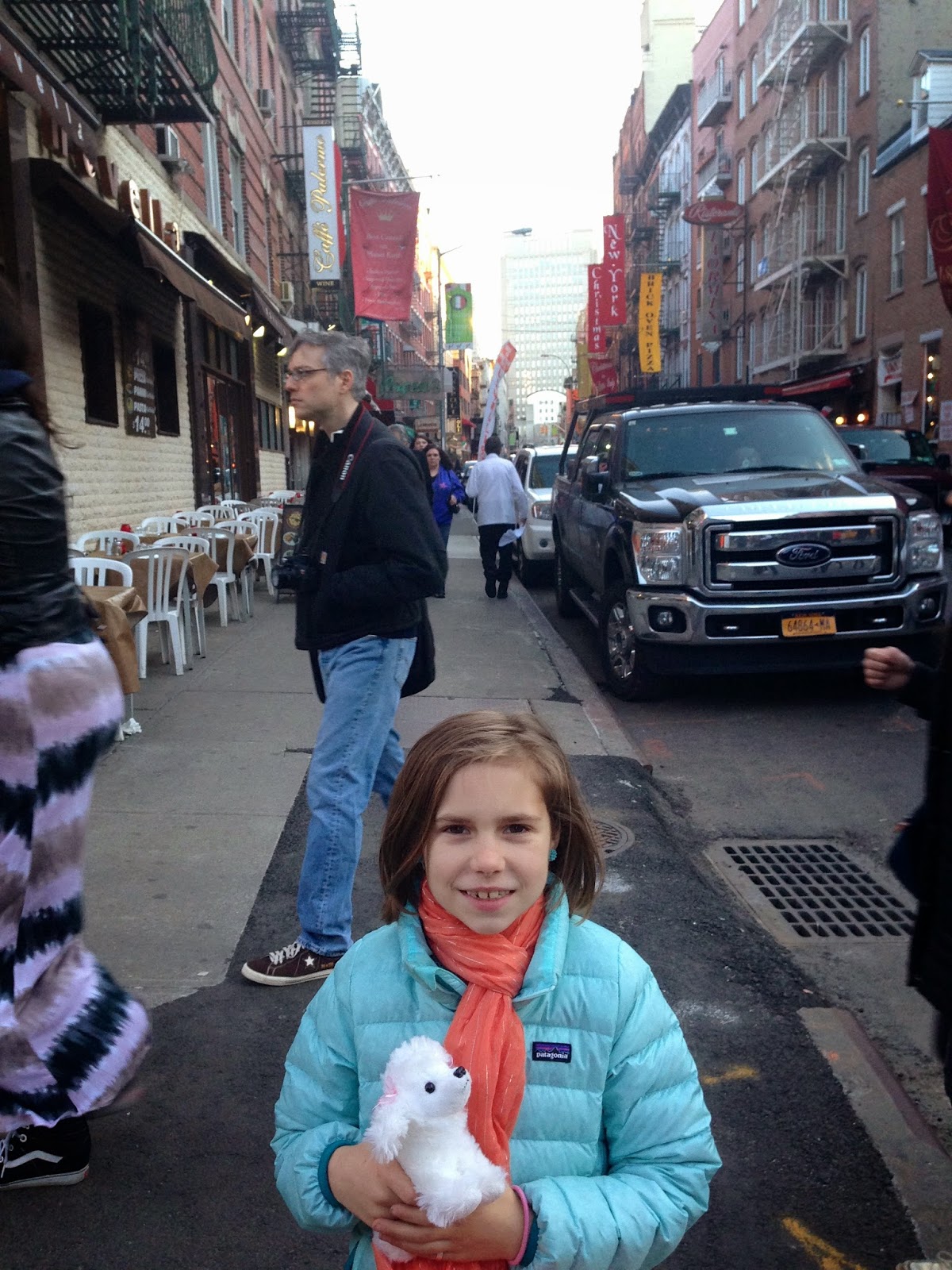 I'm not sure how we went an entire year without going to Little Italy, but this was our first trip.  It turns out it's now quite small, with Chinatown encroaching from all directions.  I guess it's been a long time since immigrants came over to America from Italy, while the Chinese are still coming over in droves. 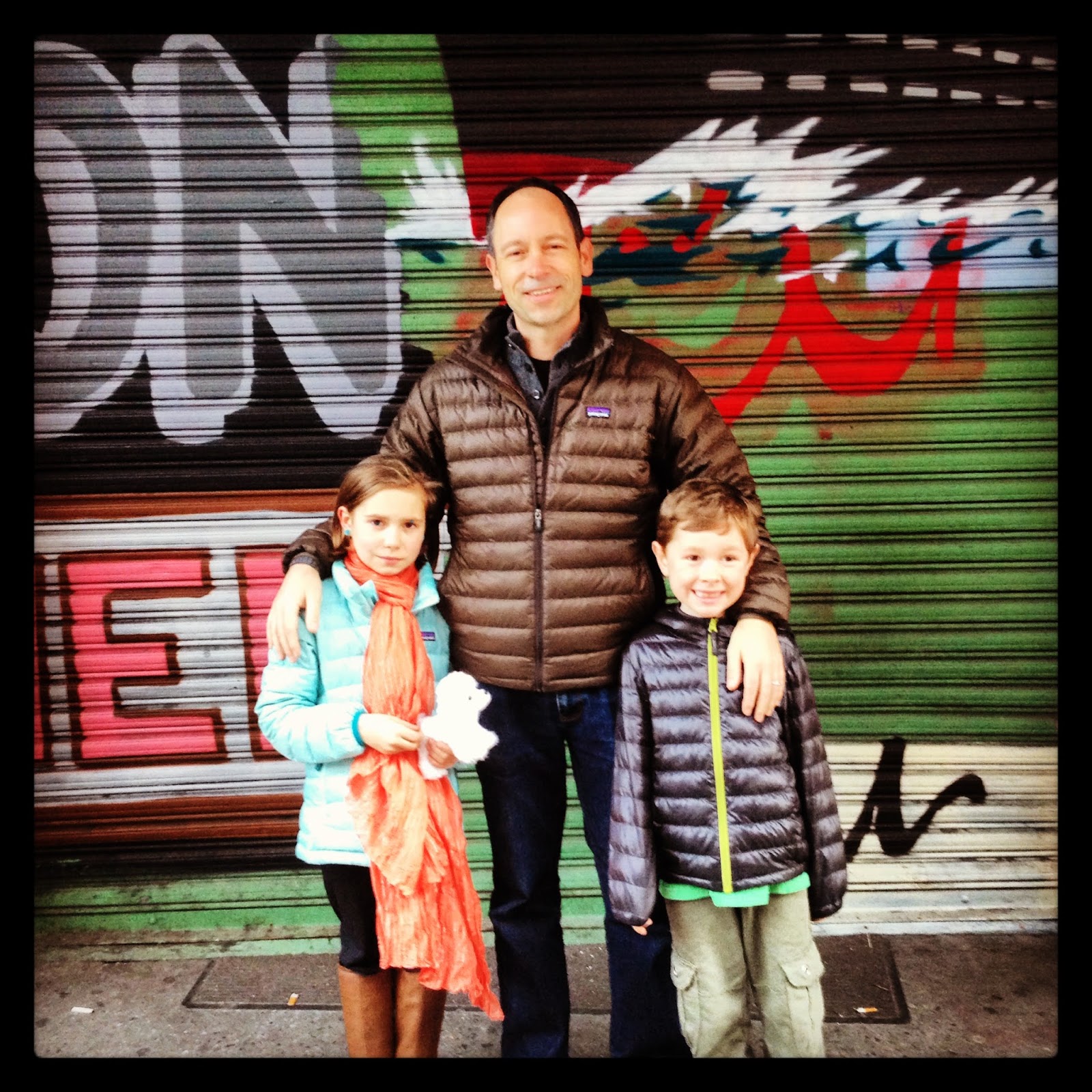 Sunday morning was spent catching up on homework, piano practice, multiplication flashcards and reading.  By noon I insisted that we get out of our tiny apartment and into the sunshine.  We spent a couple leisurely hours wandering around Central Park.  The kids brought their sketchbooks - Ella was now inspired by Mr. Audubon to draw some nature. 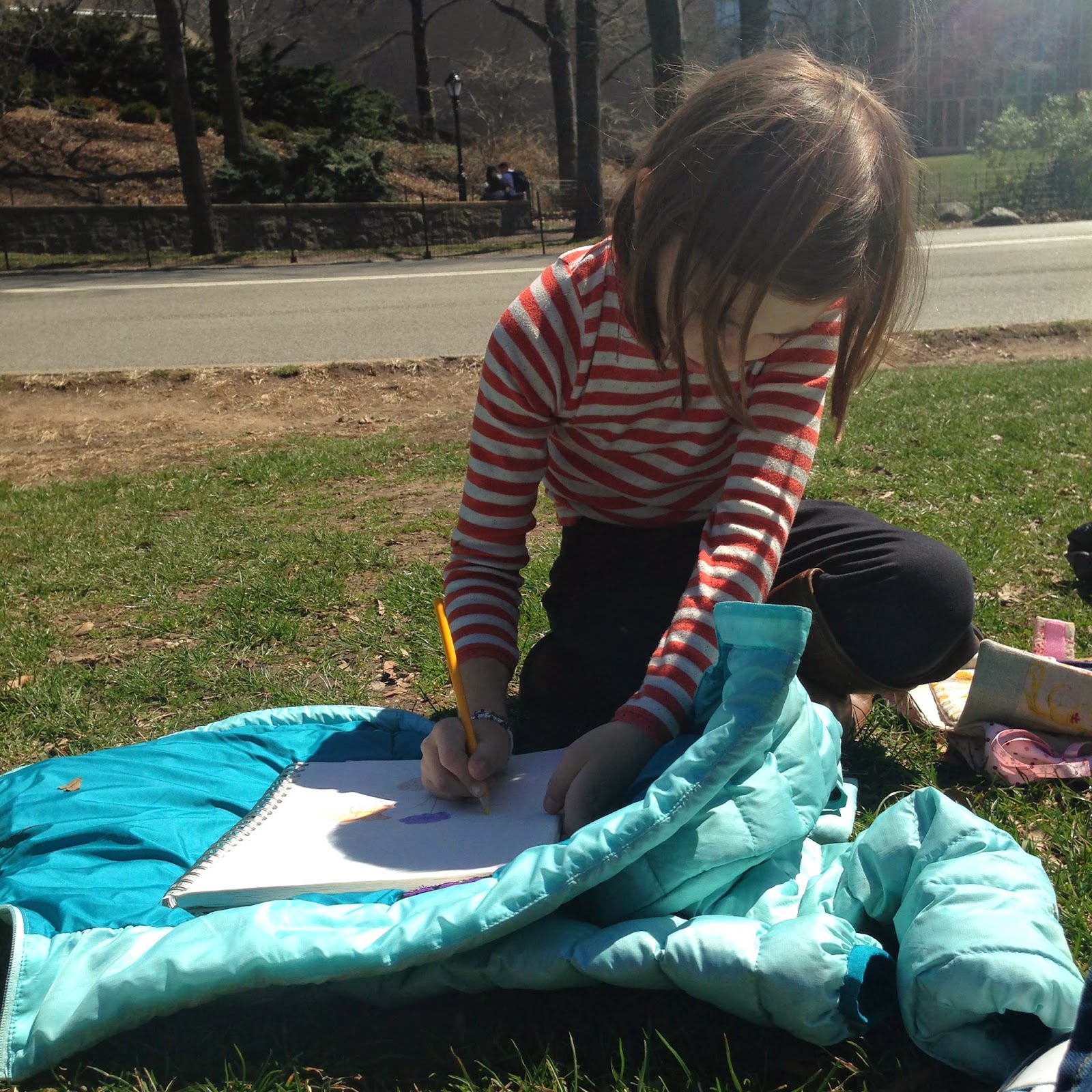 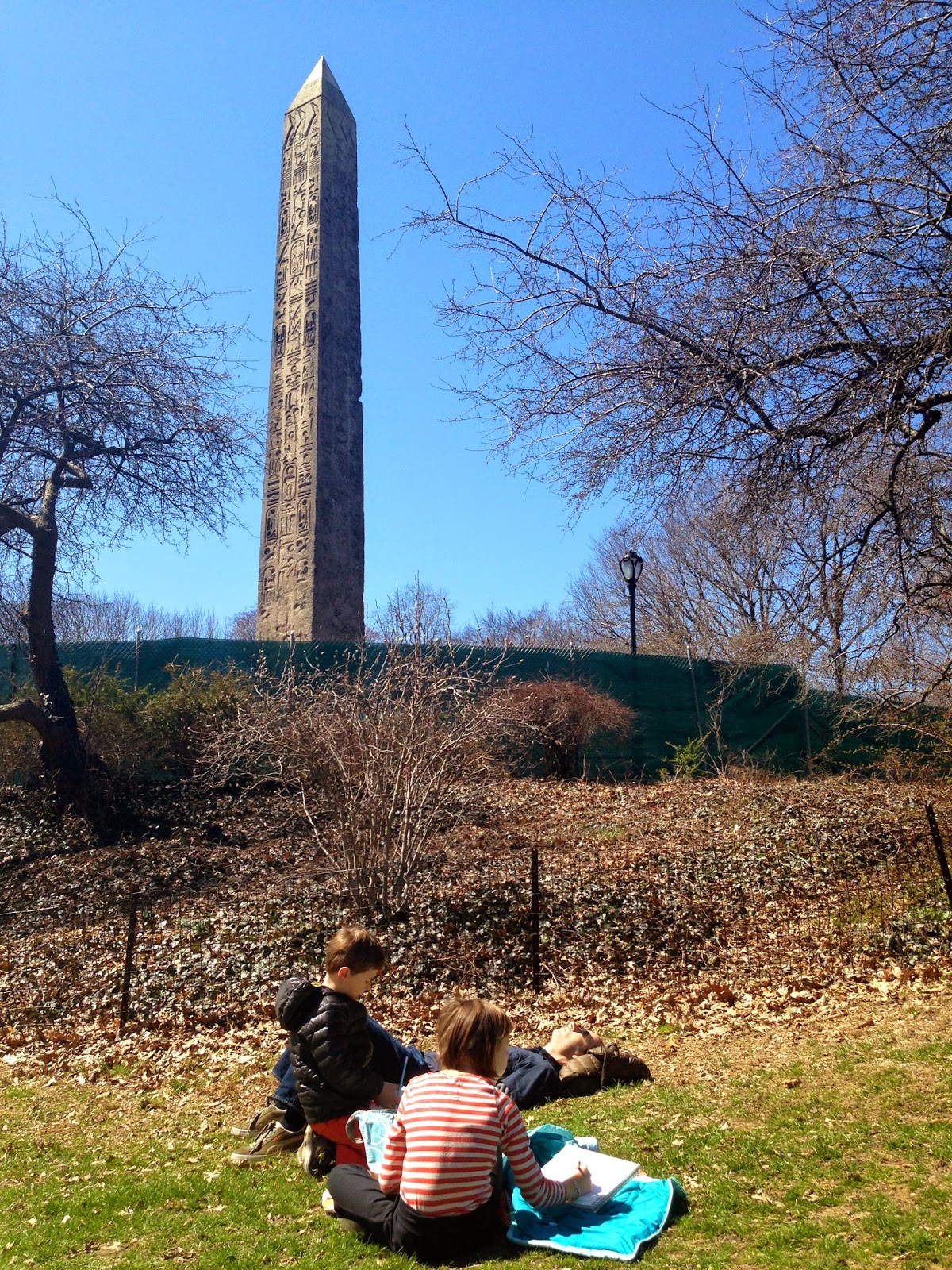 We sat under the 3,500 year old obelisk from Egypt, Cleopatra's Needle.  The name is a misnomer because it was actually built 1,000 years before Cleopatra was born.  But after being burned and buried for 500 years, Cleopatra had it unearthed and erected in her palace dedicated to Julius Caesar.  Eventually it made it's way to New York from Egypt in the late 1800s as a gift for increased trade.

The kids climbed trees and enjoyed the fact that spring has finally arrived. 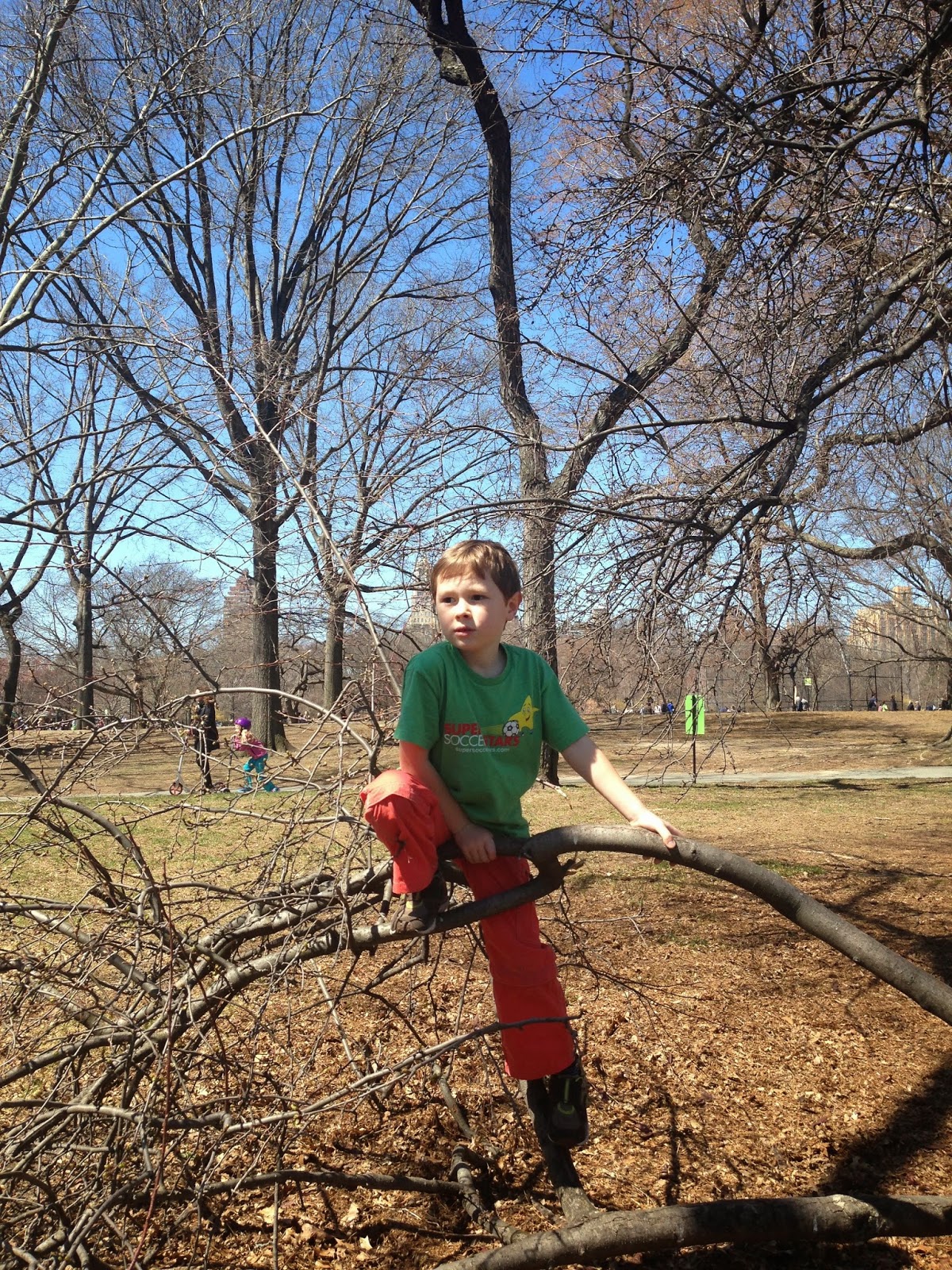 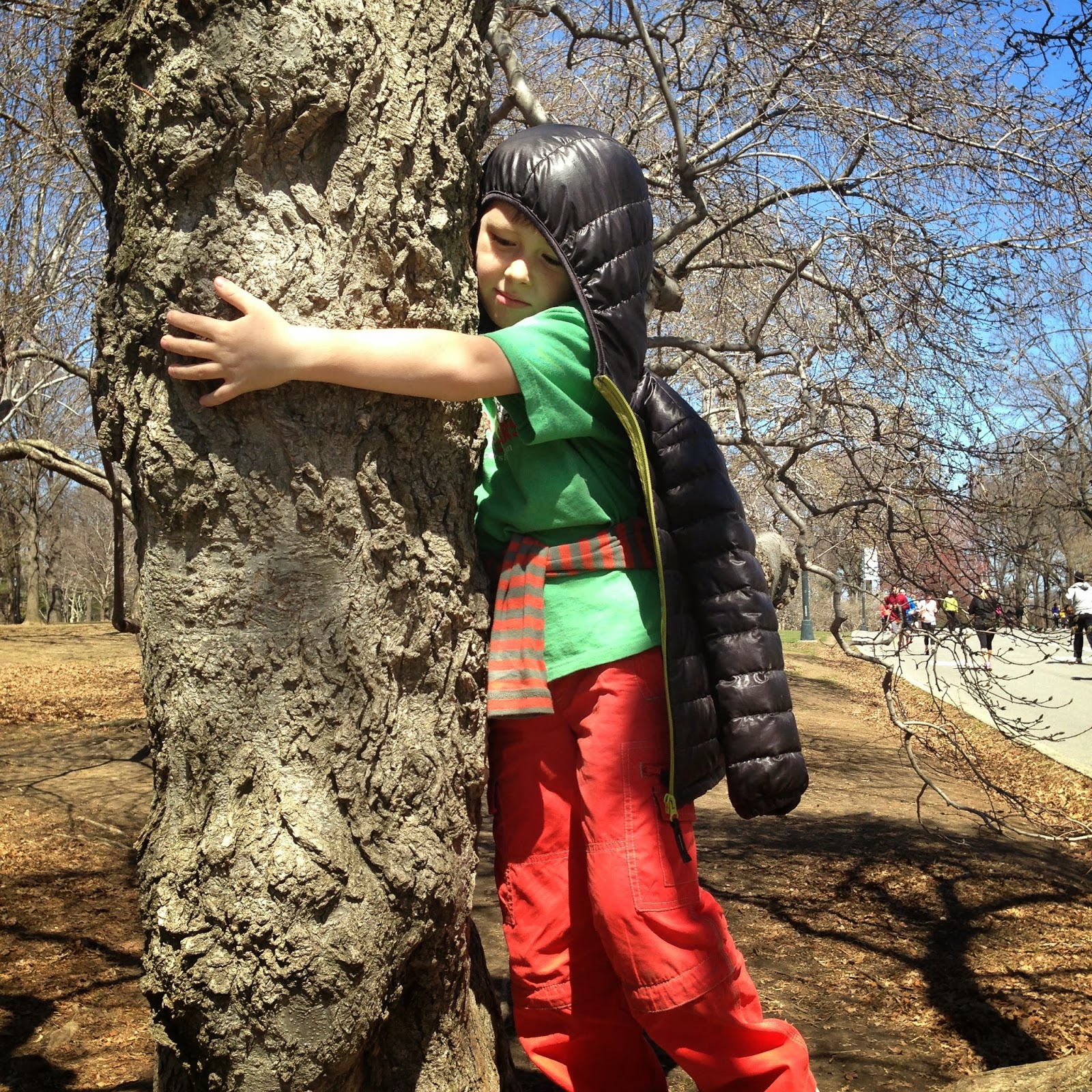 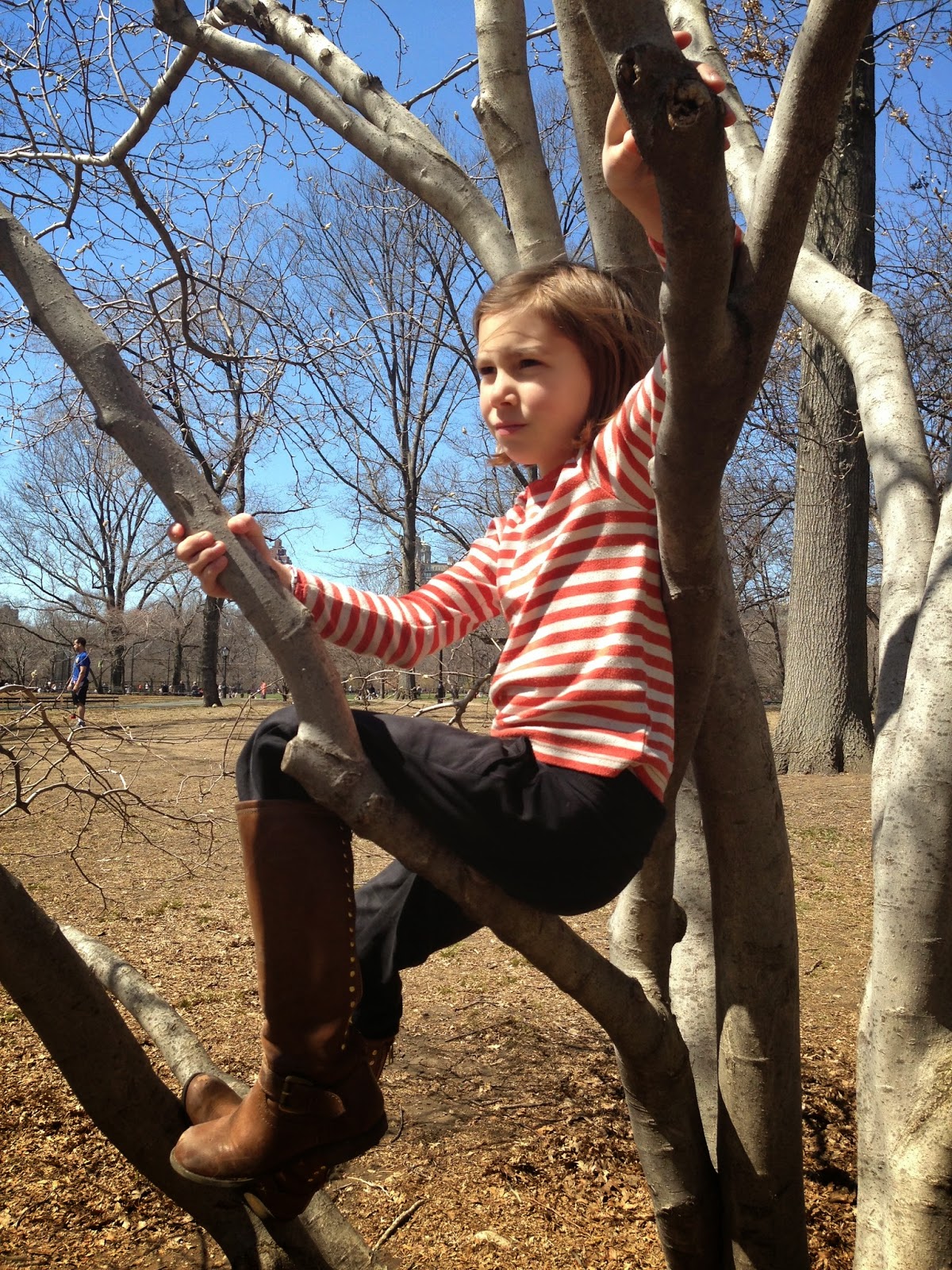 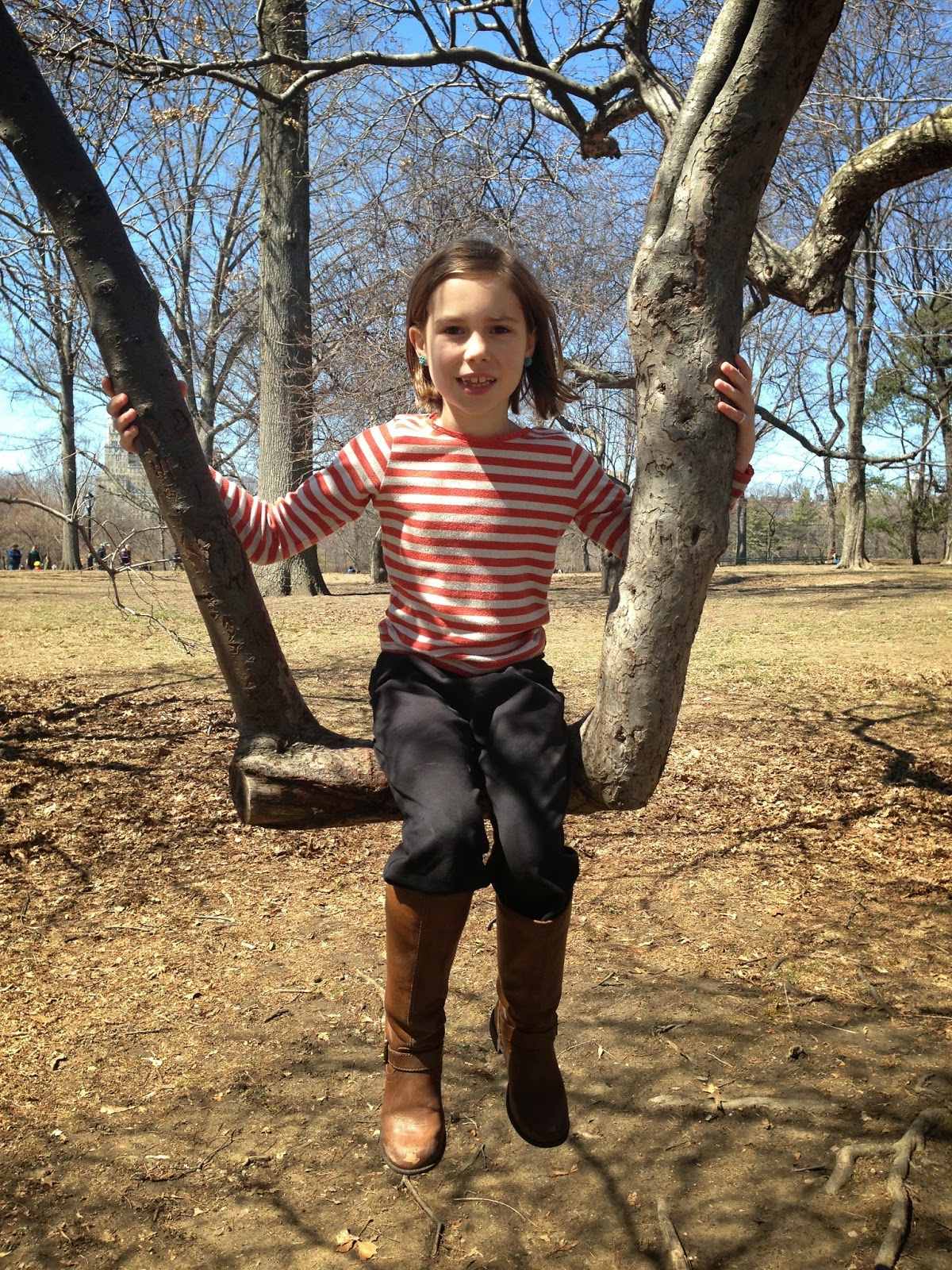 If it's the first Sunday of the month, it's Science Teacher Sarah time!  We made our way south to Sarah's laboratory in the West Village and the kids spent two and a half hours having an under the sea celebration.  They learned all about sea creatures, what keeps a whale warm, how underwater volcanoes make islands, and what lurks at the bottom of the ocean.  They loved every minute of it. 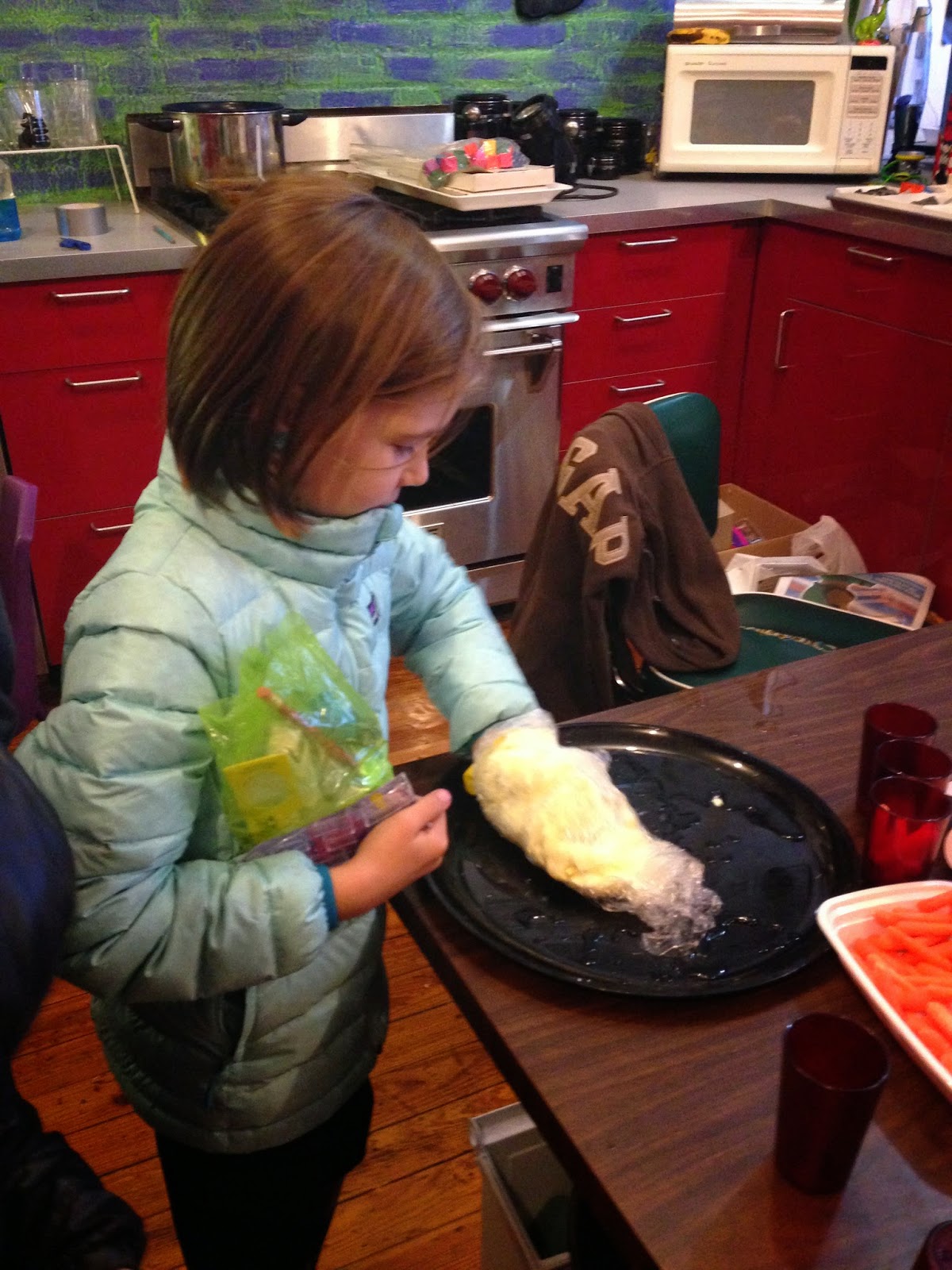 Ella has her hand in a glove that is covered with butter and plastic wrap. The butter simulates animal fat.  They got to stick their hand in ice water to see how the butter keeps them warm.

While the kids were playing with fat, the grown-ups got to play as well.  Our friends Alina and Tom also dropped their son Luke off at Science Teacher Sarah's and the four of us wandered over to the legendary White Horse Tavern.  This bar has been opened since 1880 but came to famed status in the 1950s and 60s when it became a bohemian hang out.  Writers and artists would hang out here, including Dylan Thomas. 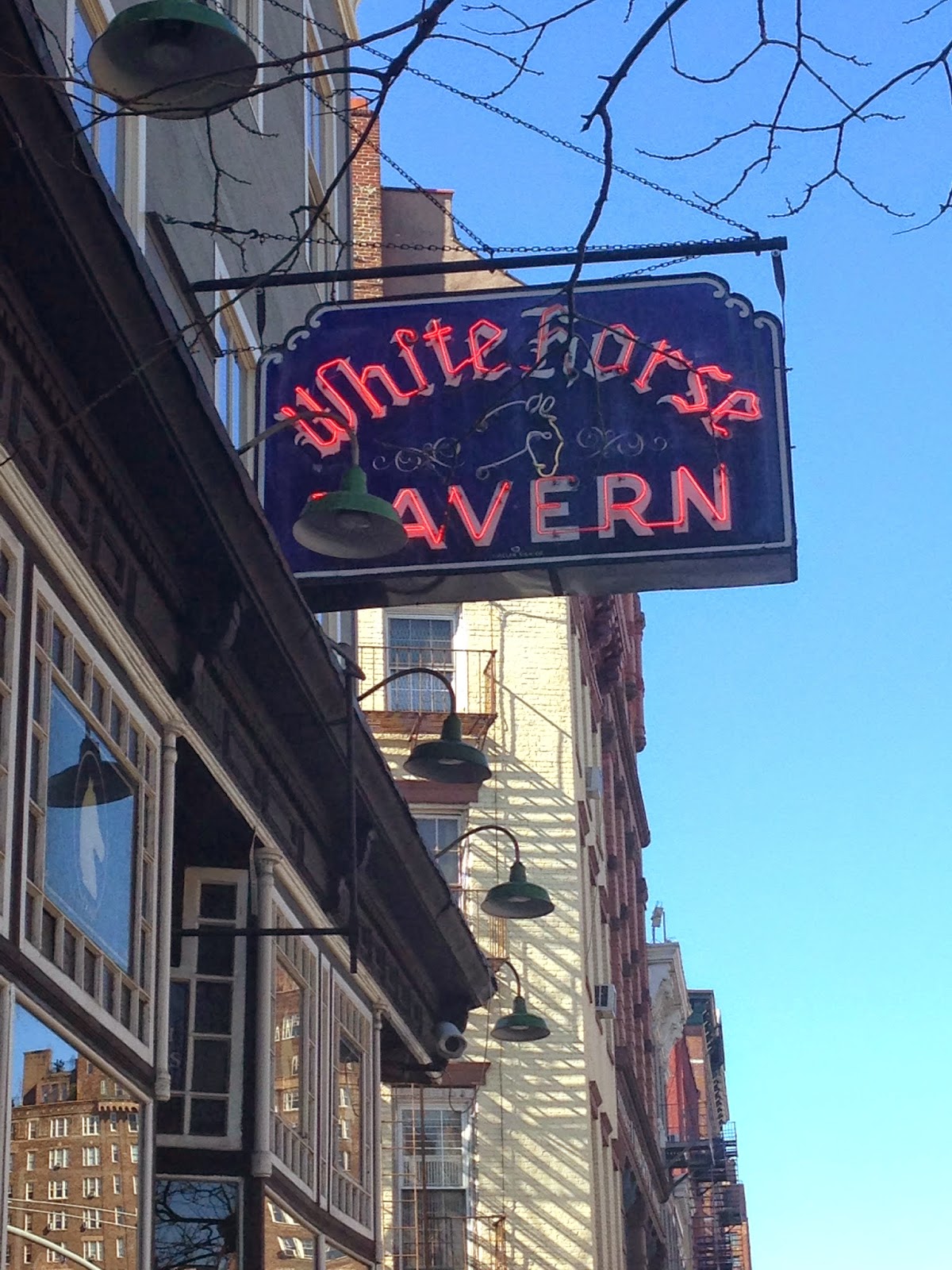 Since the sun was shining we were able to get a table outside and enjoy some cold beers over great conversation with our friends.  The two and a half hours flew by.

And so the rain is back today but that's OK.  I'd much rather have it rain during the week and let us get some much needed sunshine on the weekend.  Thank you, Mother Nature.
Posted by Gretchen at 12:29 PM