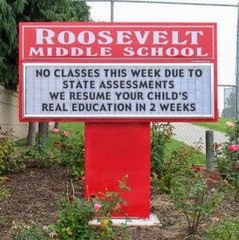 This week is the English Language Arts testing week for all 3rd through 5th grade students at public schools in New York.  They will have three days of testing this week and will have another three days of testing at the end of the month in math.  This morning Ella said, "I can't believe The Big Test is finally here."  My heart dropped a little because all they have been working on since the first day of school this year is preparing for The Big Test.  Ella has become an excellent test taker.  She has taken more practice tests since September than either of us can remember.

All at the expense of a real education.

She can tell you that she'll get a point off if she uses the term "I think" in an essay because essays on The Big Test aren't supposed to have opinions.  And she can tell you that she needs to count the question marks in a math word problem to know how many answers to give.  And her teacher taught her that if the test is almost over and she hasn't finished yet that she should fill in all the remaining 'A' bubbles.  But the real critical thinking that the Common Core State Standards is supposed to support takes a back seat to making sure you fill in all of your bubbles correctly.

Perhaps I should blame the new Common Core Standards (a set of national standards that each student in the public school system is supposed to meet each grade level) for the dramatic change in her education this year.  Having all children in the U.S. meet the same academic standards each year sounds like a good idea in principle.  And raising the bar of education, which the CCSS purports to do, is definitely something I can get on board with.  But a one-size-fits-all approach to education never works.  Children, humans for that matter, all learn at different speeds and in different ways.  Taking the flexibility away from teachers to try to meet each student where they're at rather than trying to get them all to pass the same test at the same time sounds like a disaster to me.  But I can't say it better than this well spoken high school kid.

Perhaps I should blame the fact that teachers now have to teach to the test.  The teachers I've spoken with are heartbroken that their creativity and flexibility in their classrooms are stifled.  In order for states to apply to receive the Race to the Top money they must agree to adopt the Common Core Standards and link teacher evaluations to their students' test scores.  Teachers fearful of receiving poor evaluations need to ensure that their students do well on these tests.  There's nothing wrong with holding teachers accountable but I think teachers can only take so much of the responsibility for their students' test scores.  Factors such as a student's socioeconomic background, parental involvement, physical and emotional health, language ability, and cultural background all need to be taken into account, none of which are in the teacher's control.  And if a teacher has to worry about losing her job if her kids don't score well, then she'll likely start preparing them for the test as early and often as possible.

What's wrong with teachers making sure their students do well on tests, you ask?  If standardized test results were actually a reflection of how much a student has learned, then nothing.  But as the articulate young man in the video says, "If everything I learn in high school is a measurable objective, I haven't learned much of anything.  Creativity, appreciation, inquisitiveness - these are all impossible to scale." So here's where I get a little philosophical.  What good does it do our society to pump out millions of 18-year-olds who all know exactly the same thing?  Especially in a time when any information can be obtained in a fraction of a second.  Filling their minds with facts and then repeatedly testing them to make sure they've memorized those facts is not preparing them for the 21st century.  What advantage will my children have when applying to college if they graduate as replicas of all the other applicants?  If they are just part of the herd?  More importantly though, what will the future of this country be if the majority of our children are educated in a system that produces a single, undeviating mind? 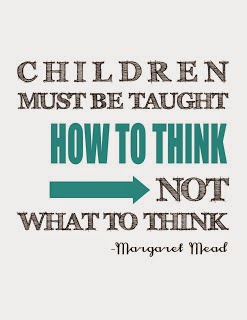 We're finding public school to be both too much and not enough.  Too much testing, too much herd mentality.  One of the reasons we chose Spanish immersion was to give our kids something different, to step away from the status quo.  But even Spanish instruction has been greatly reduced because as we are so often told, "the test is in English."  I often picture all of the children in my children's classes as being pushed through the same small hole all at the same time.  And yet while there is too much focus on testing, they're not getting enough of what they need.  They are bored stiff because their teachers need to push all 25-30 kids through the same hole at the same time.  If my kids make it through the hole first because of any of the factors I listed above, then they sit and wait for the others to catch up.  The teacher doesn't have the time or resources to individualize the learning for each child.  They don't have the luxury of encouraging long discussions or thinking outside of the box.

Because how would we test for that?
Posted by Gretchen at 1:56 PM