So it turns out that blogging while children are home, demanding your full attention, is near impossible.  Welcome to Spring Break.

First I'll give a weekend update.  Ella started Spring Break 2014 off with a nasty bug.  She was up most of Friday night with a fever, nausea and headache.  Way to start off a week and a half of vacation.  We visited her pediatrician on Saturday and ruled out Strep throat (which seems to be rampant in New York City).  So Saturday was spent close to home, cleaning up the back yard and getting ready for spring. 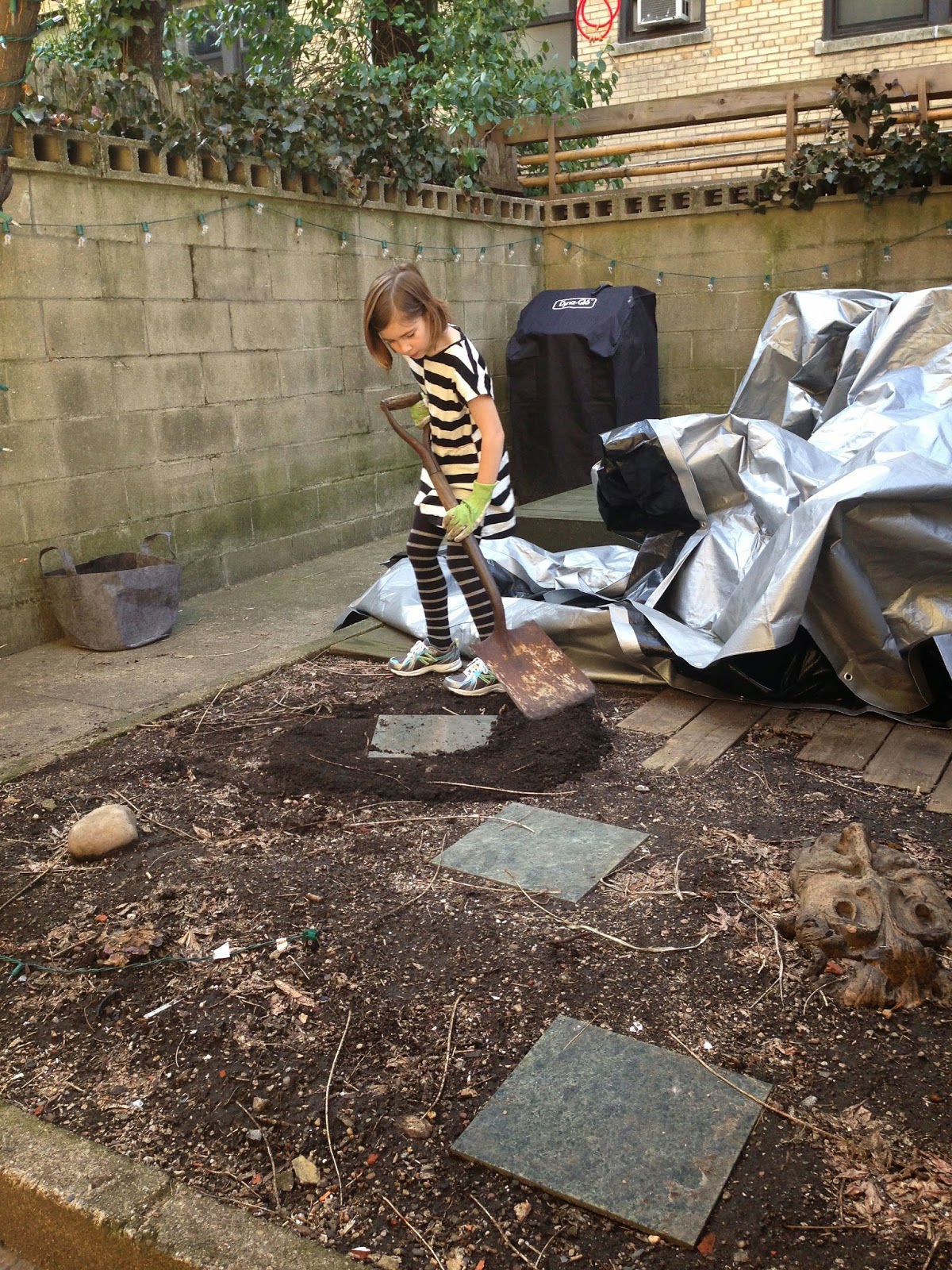 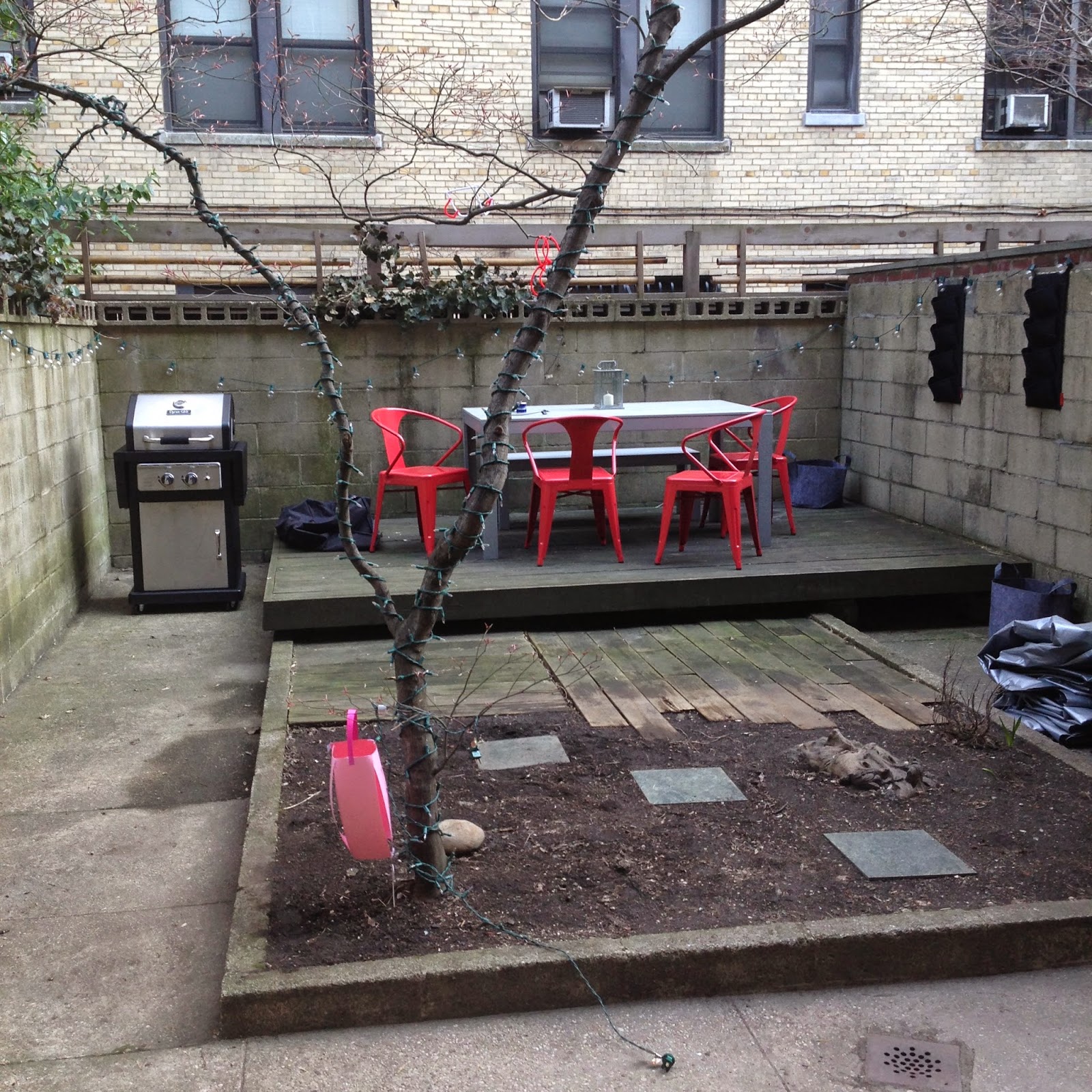 And since it was such a warm evening, our first this year, we did what any respectable Californian would do, we barbequed and ate our dinner outside. 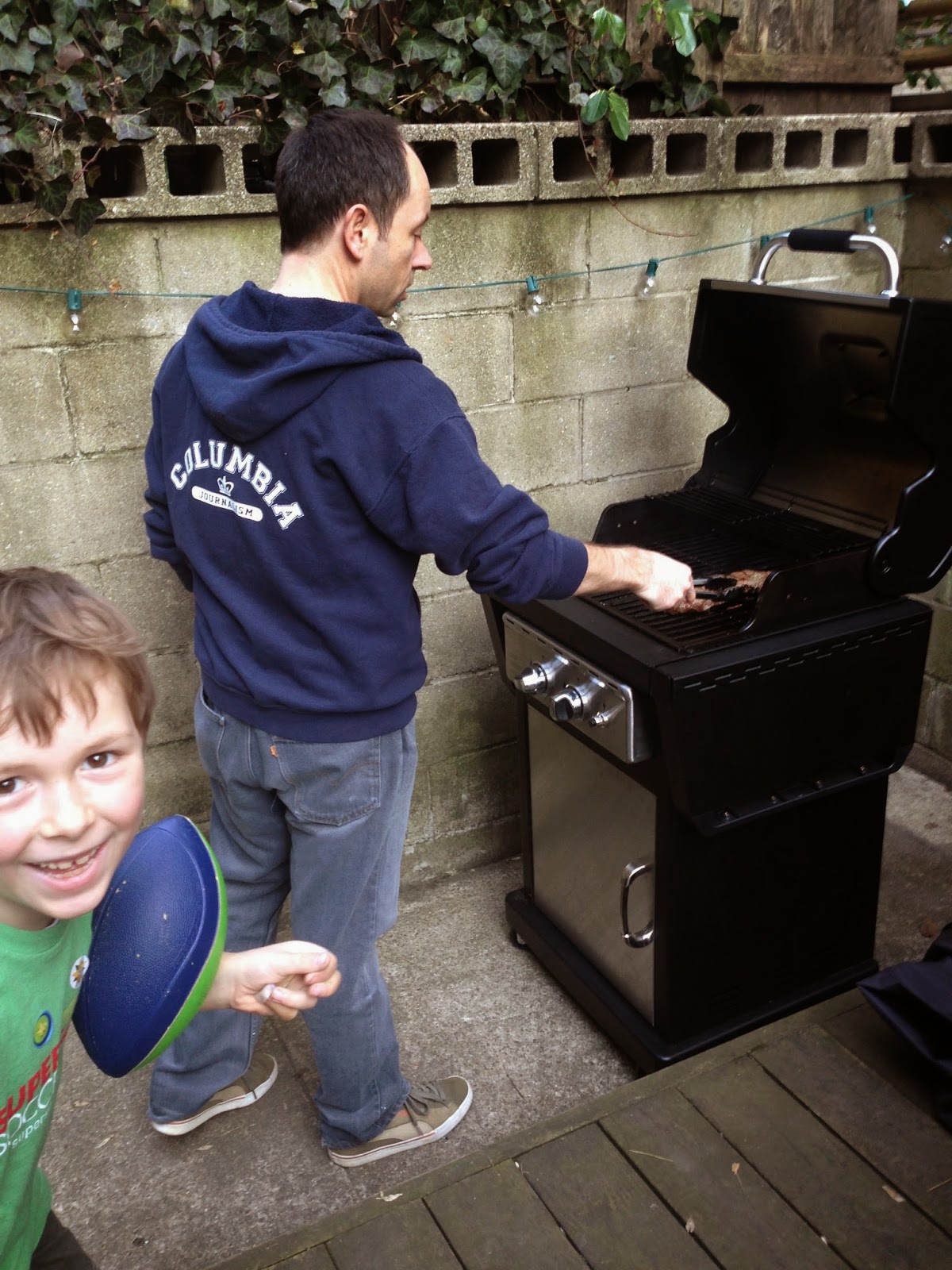 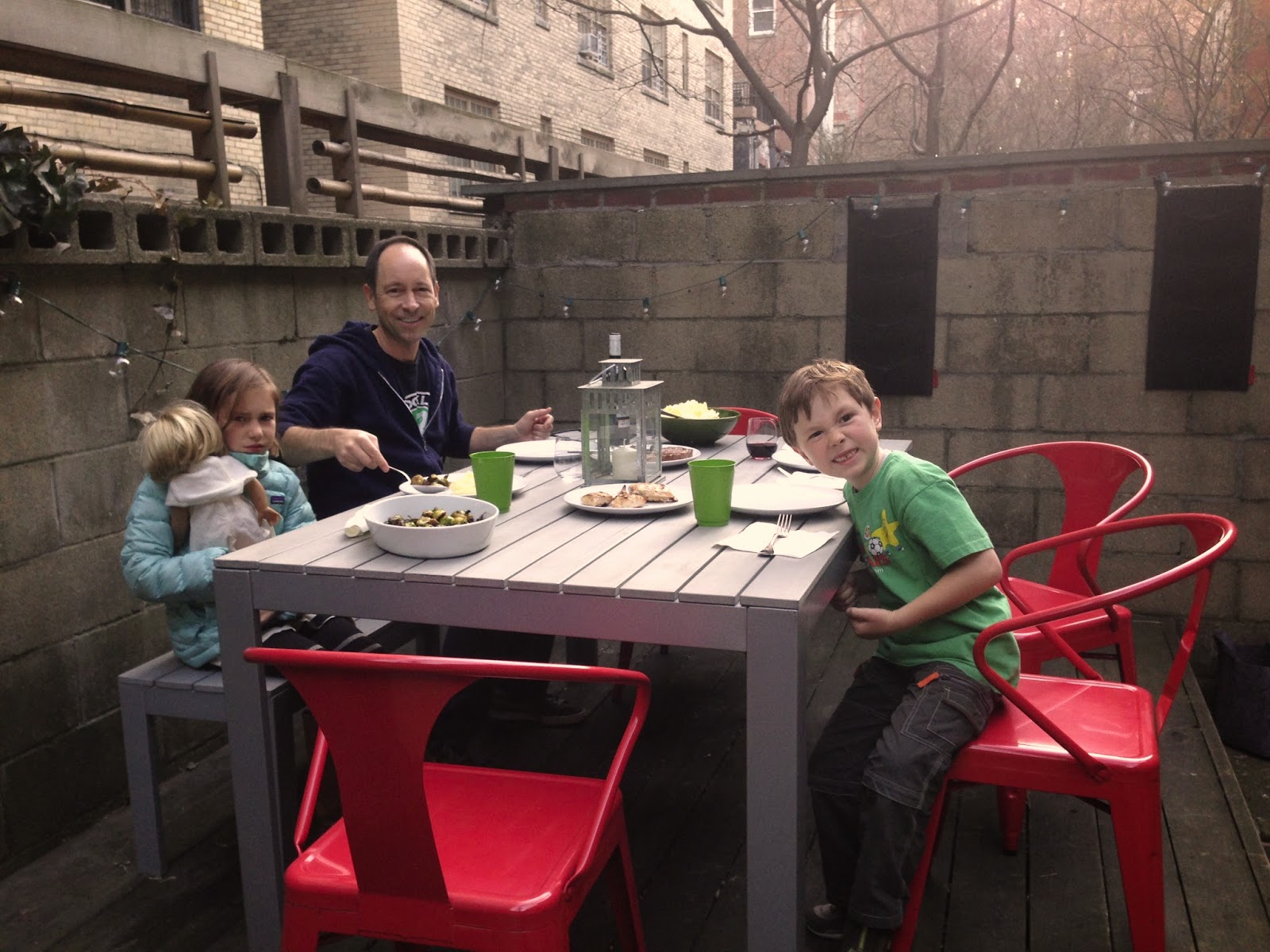 All week long I was feeling really claustrophobic and in need of a day out of the city.  I think we all were.  The only time we've been out of the city in the last three and a half months was our weekend in Disneyworld - not exactly getting back to nature.  So on Sunday morning we grabbed some bagels to go from Barney Greengrass, hopped in a Zipcar and hit the road.

We headed a couple hours north to Woodstock, New York.  It was a beautiful drive and so nice to be out in fresh air, away from the skyscrapers.  Upon the recommendation of my yoga instructor, we made our way to the Woodstock Farm Animal Sanctuary. 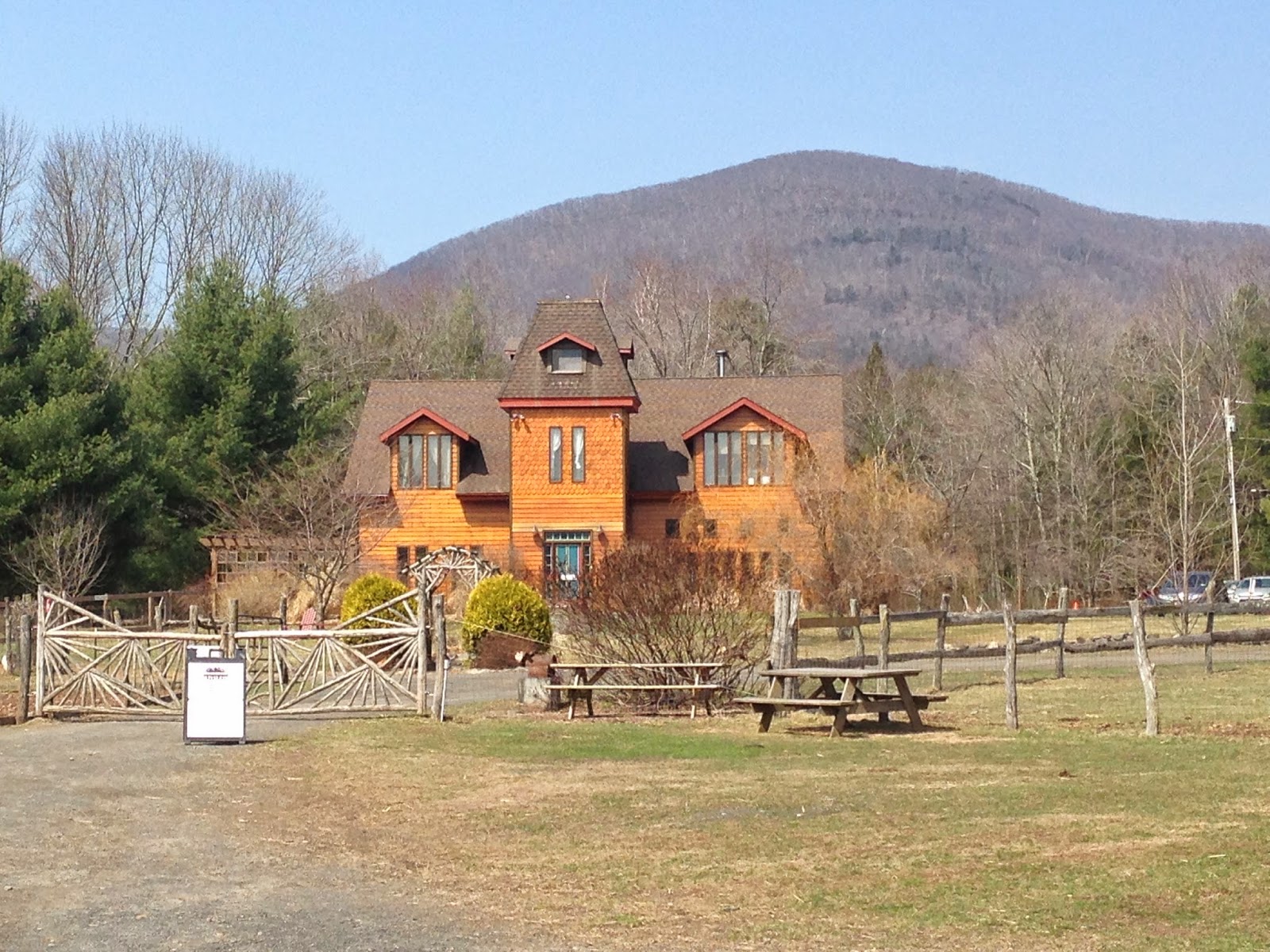 Ella and Kevin have been dabbling with vegetarianism recently (at least until our BBQ last night) and I thought it would be an educational trip for all of us.  Woodstock Farm Animal Sanctuary is a farm that rescues abused farm animals, mostly those headed for slaughter.  They have a strong vegan agenda and spent a lot of the walking tour going into detail of how animals are slaughtered and raised in horrible conditions.  Luckily, the kids were so engrossed in the animals that they weren't listening to much of the gory details. 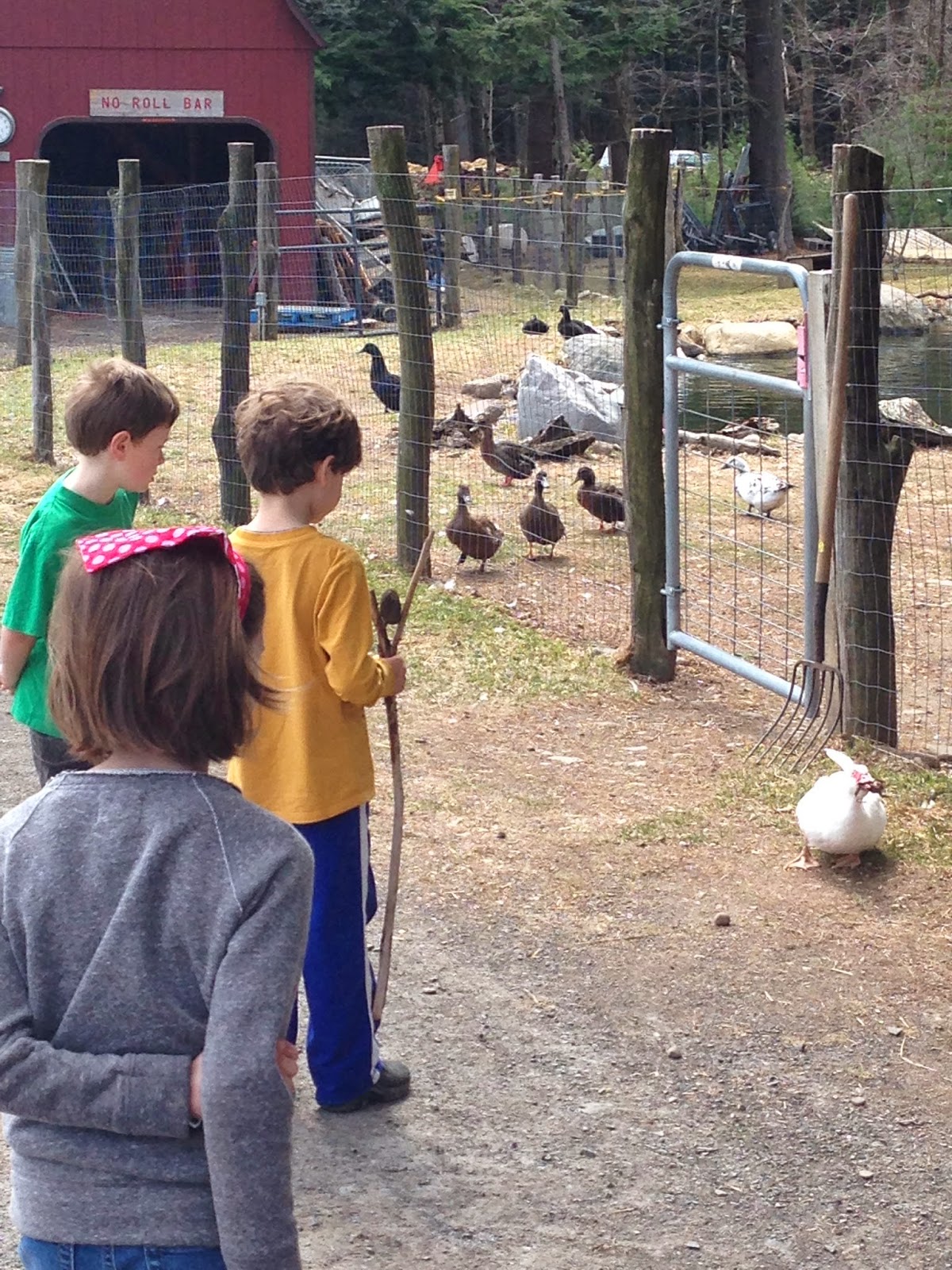 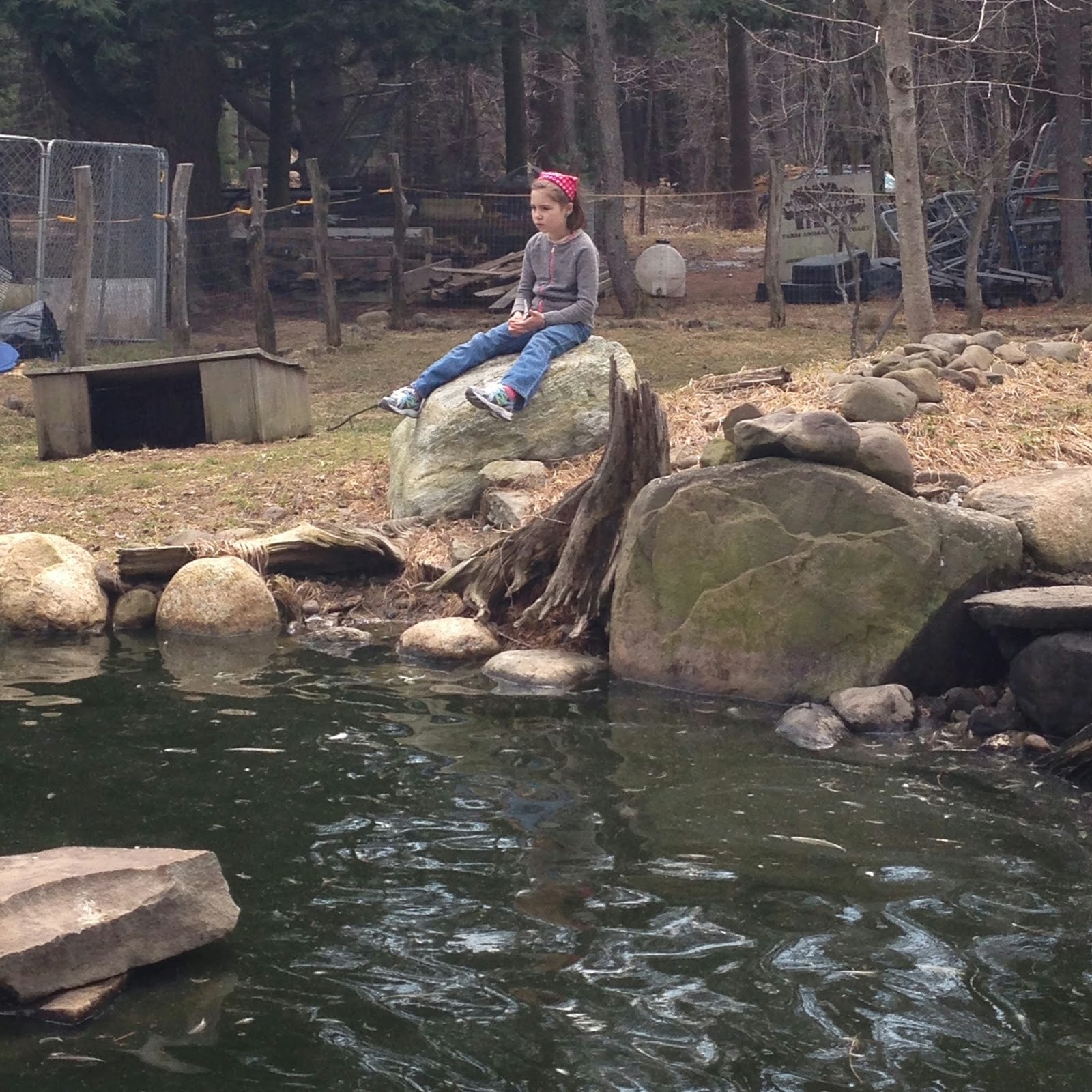 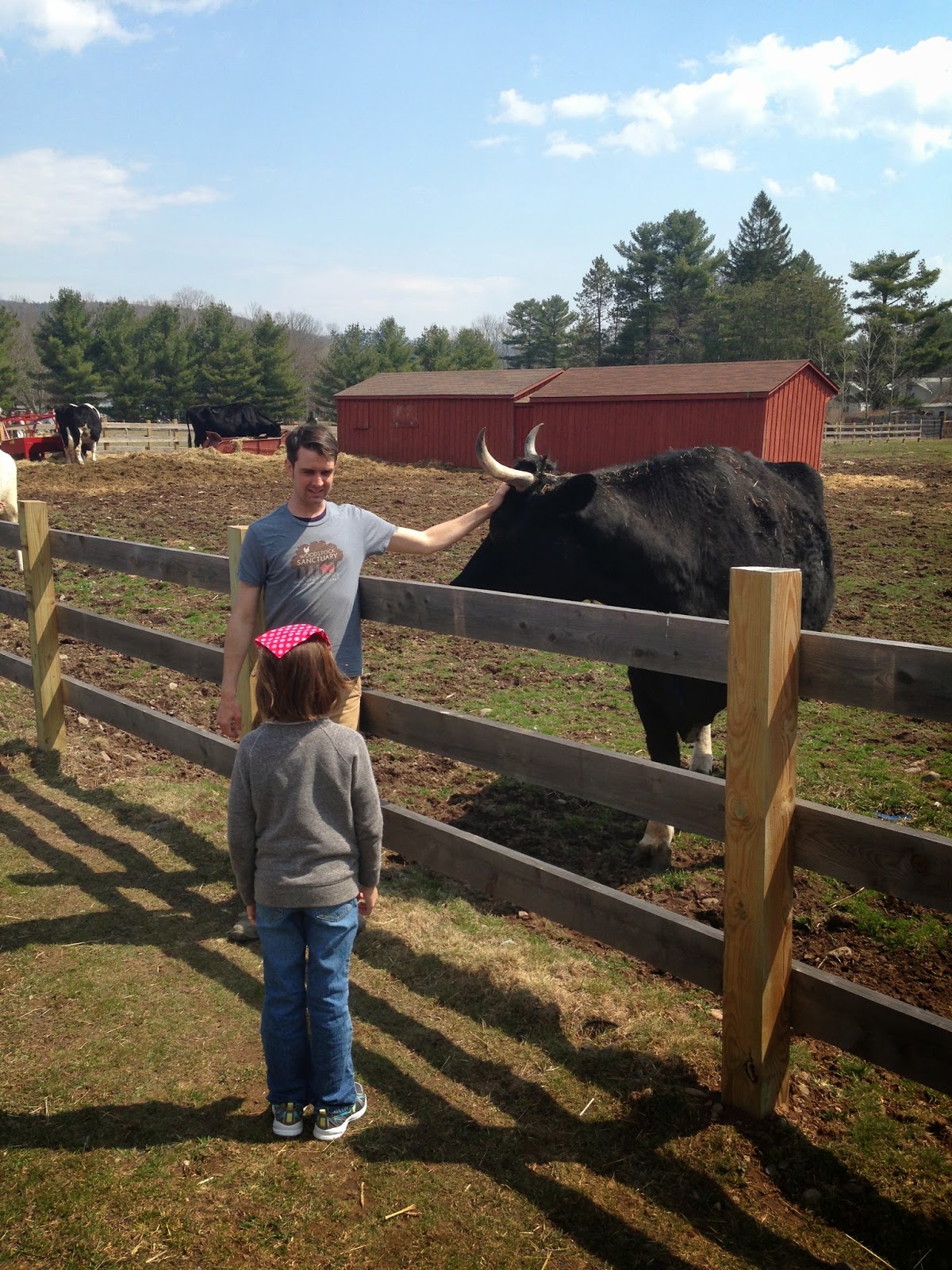 Visitors are allowed to hang out and pet and cuddle with any animal on the farm.  All the animals have names and very sad histories. 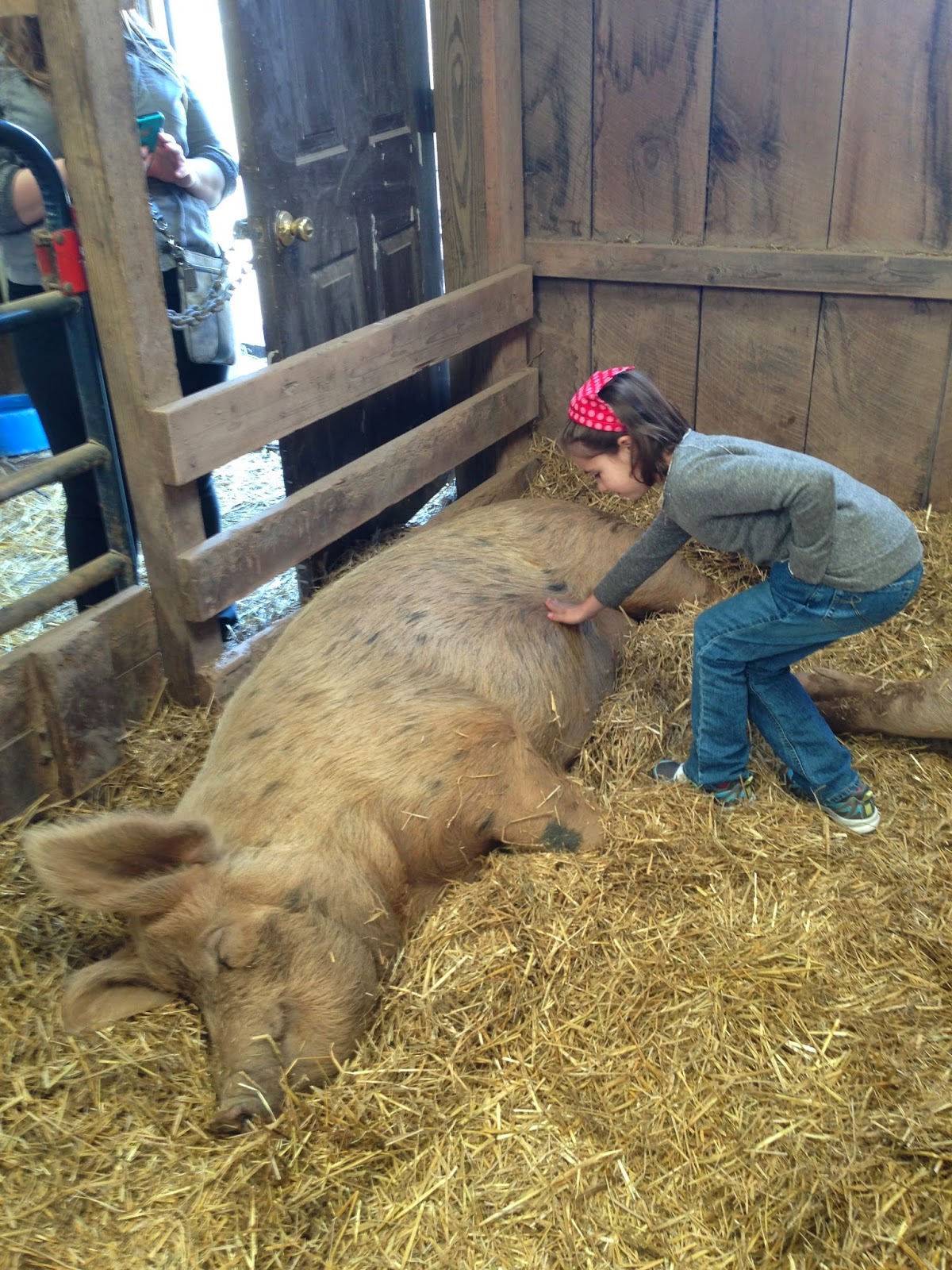 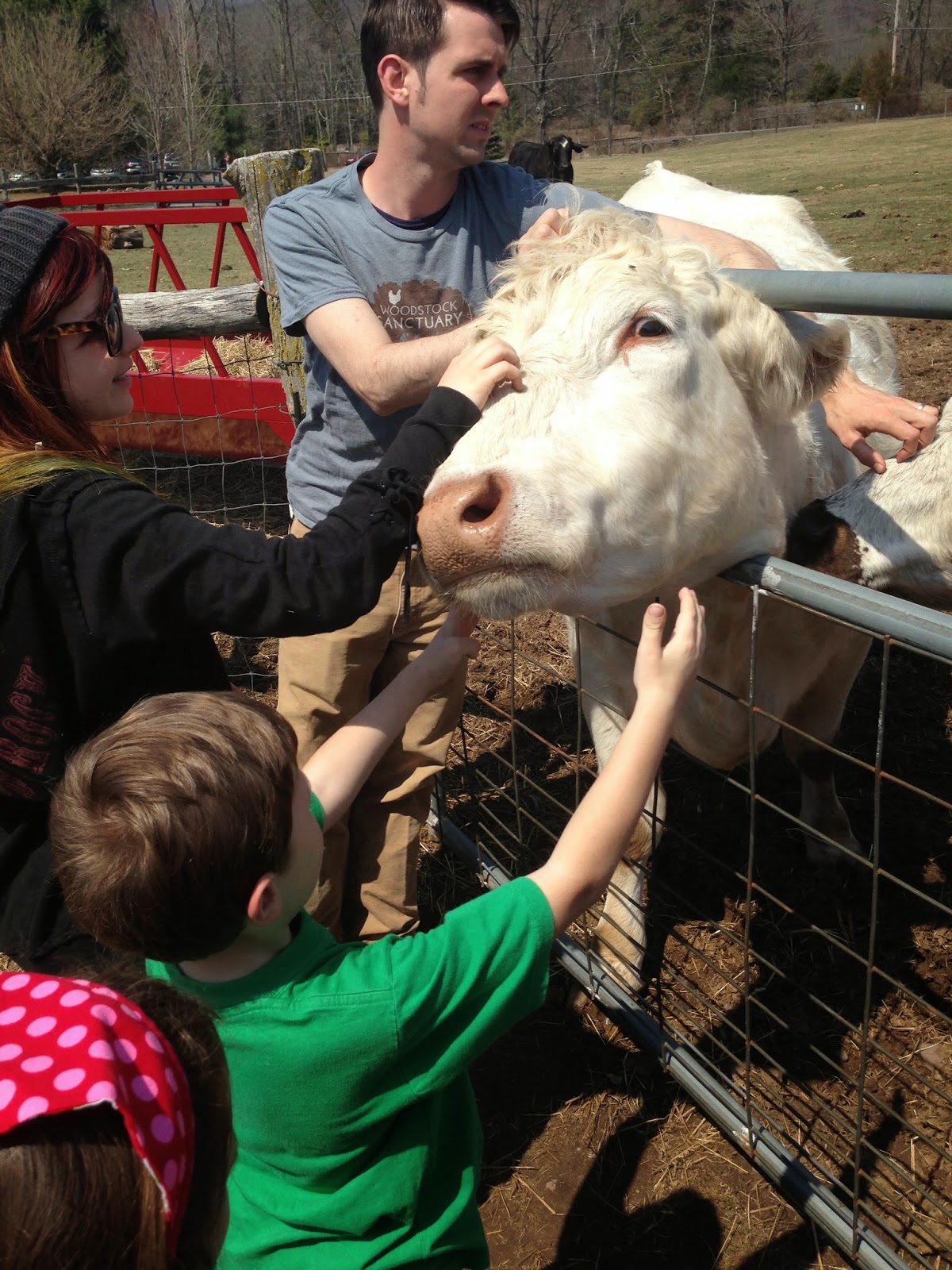 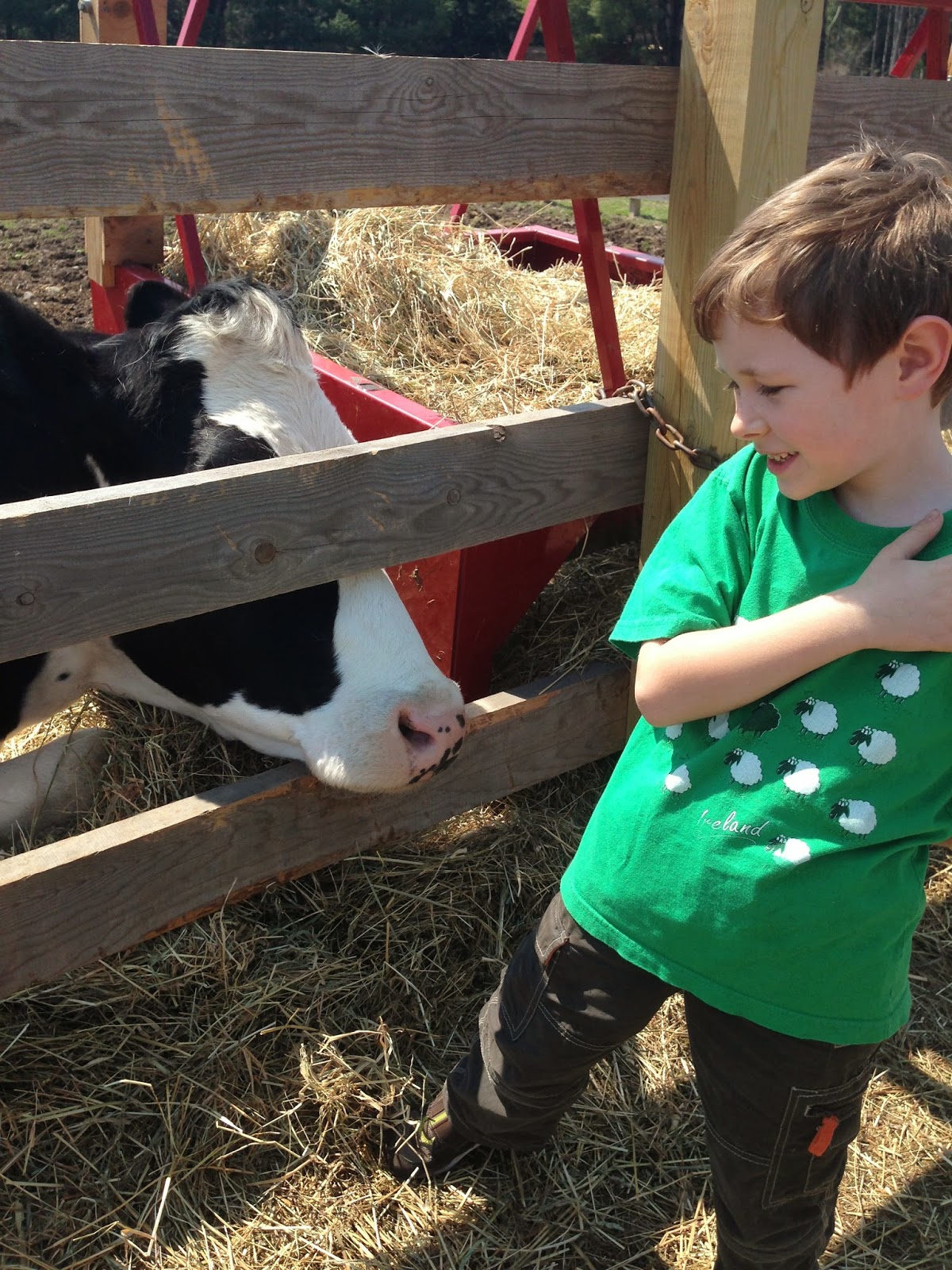 We're mostly a vegetarian family anyway - I don't cook any meat or chicken at home.  I haven't eaten red meat in almost 20 years and only started to eat chicken again during my second pregnancy 6 years ago (it makes eating in restaurants a lot easier).  I decided after this tour to drop the chicken and just go veg again.  When I first stopped eating meat it was for health reasons (and still is - I just don't digest meat well), but the more I've learned about what raising cattle for meat does to the environment (more specifically, their methane) and hearing on this tour how animals are treated in the food industry, it's an easy choice for me.  Ella and Kevin were already on board the last few months after Ella accidentally saw some clips on the computer of animals being raised for food in industrial settings.  It made her very sad.  Holden however, won't be giving up his cheeseburgers anytime soon.

We had a vegan lunch at a beautiful outdoor restaurant in the cute town of Woodstock.  It's exactly what you would think Woodstock would be like.  The tye-dye shops outnumbered the coffee shops and there was actually a drum circle playing in the town square while we were there.  It was an adorable little town and reminded us a lot of the town of Fairfax in West Marin County back home.

Spring Break officially started on Monday and the weather was gorgeous again.  The kids and I picked up a bunch of plants for the yard.  I got some vertical planters to try this year for the herbs.  I'm not sure how vegetable planting works in a city...I mean rats need to eat, too.  So we'll see how this experiment works. 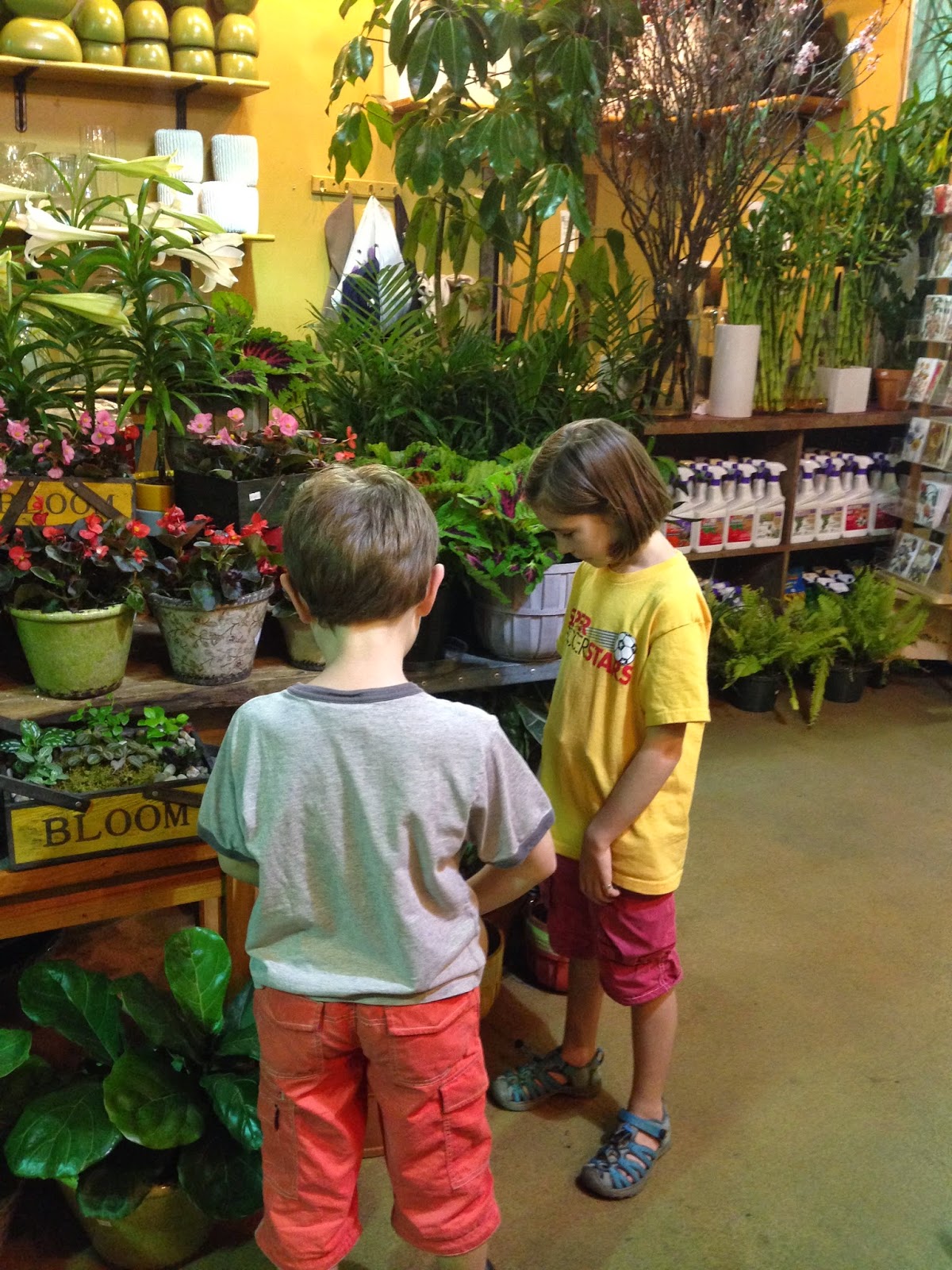 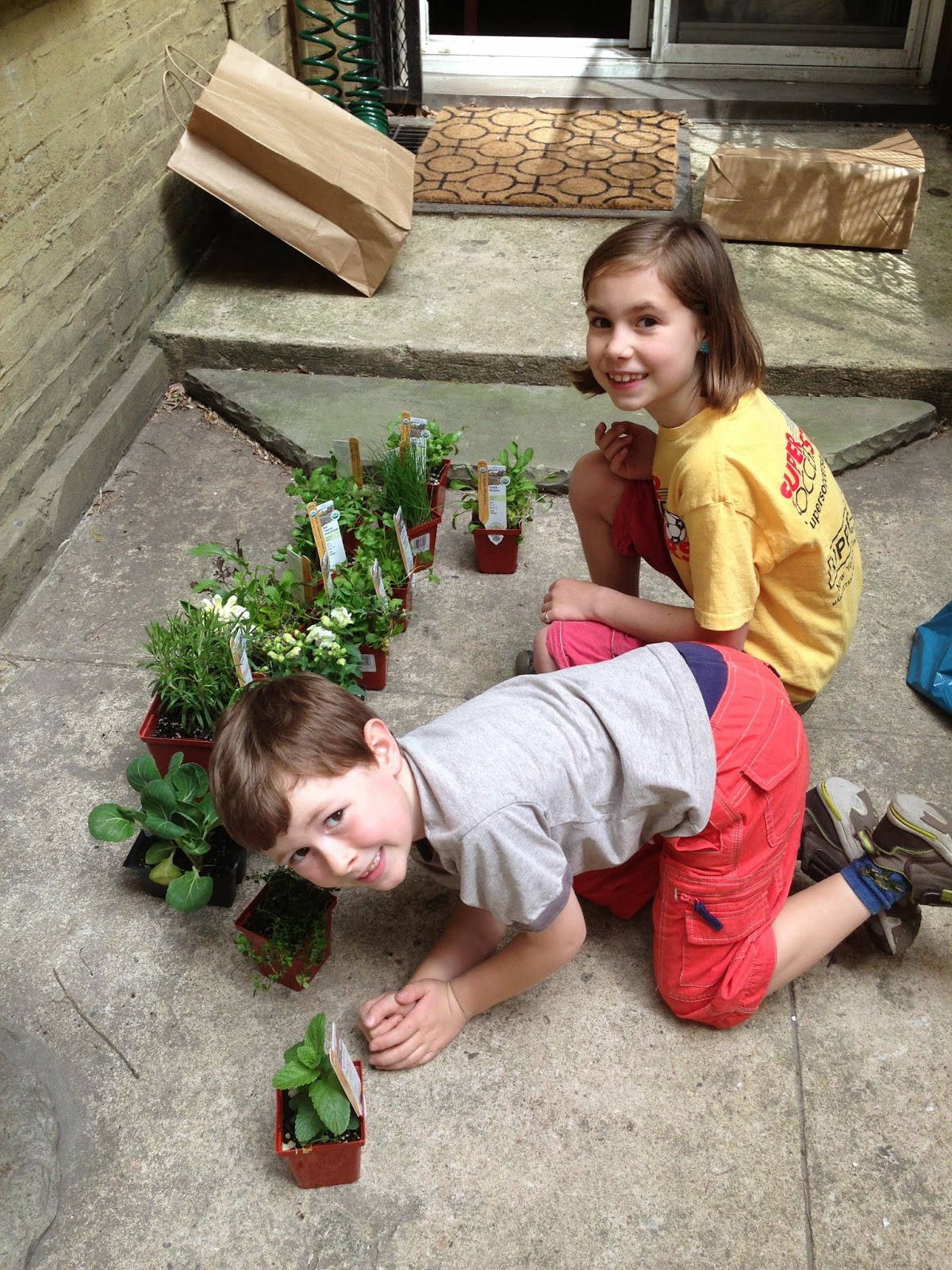 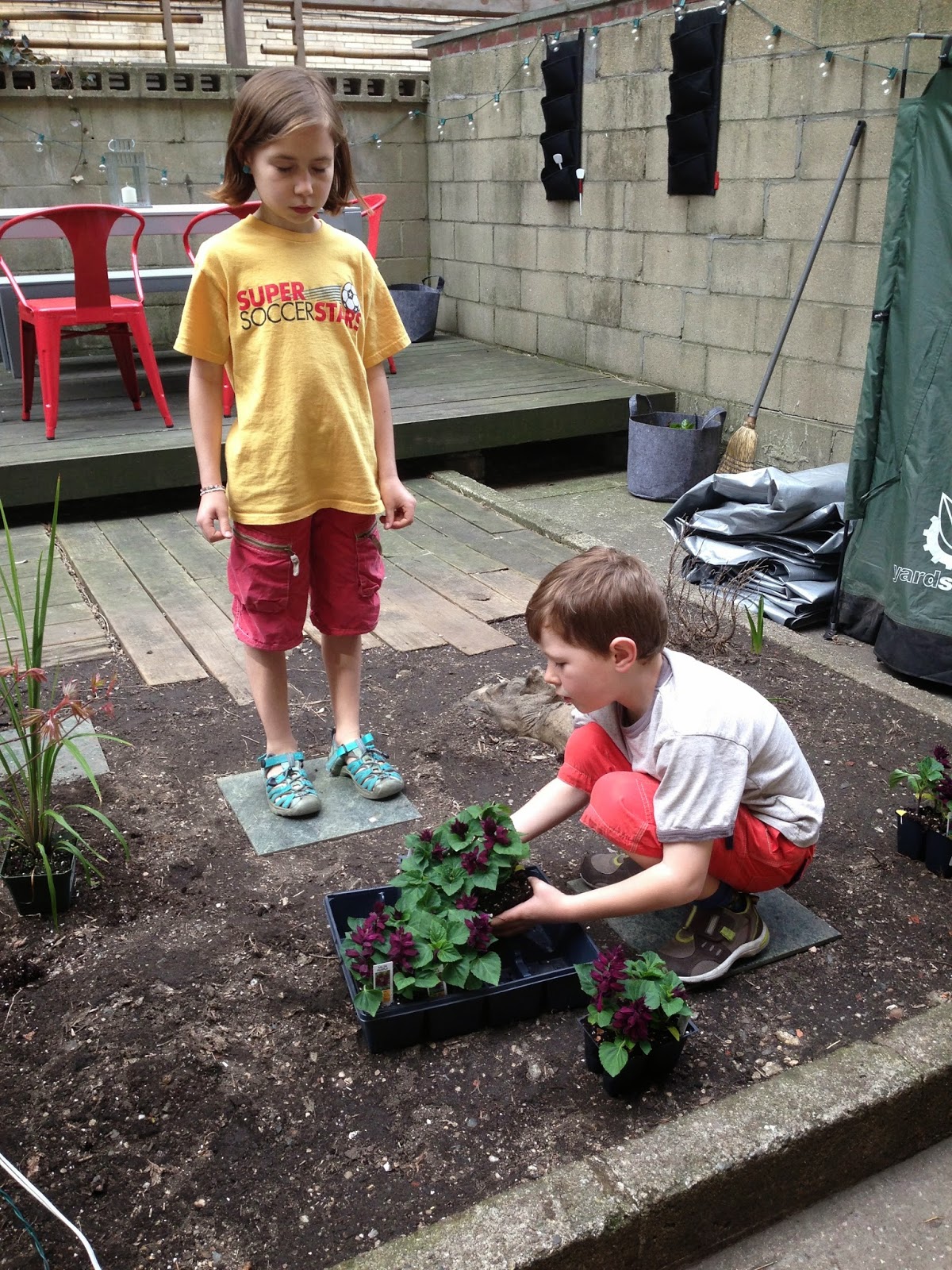 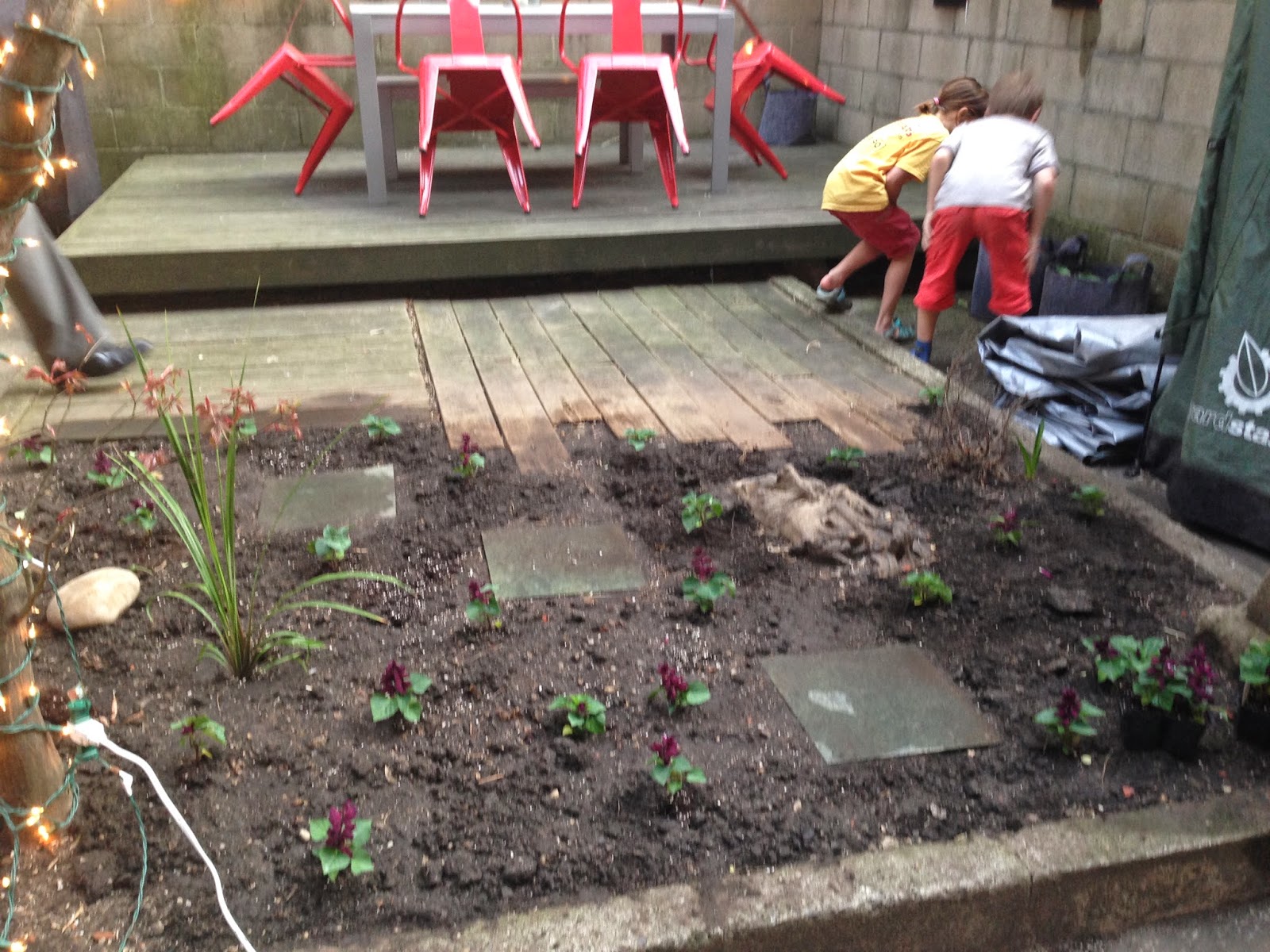 And since Ella was feeling better and the weather was so nice (the forecast for the rest of the week is rain), we joined a free Urban Park Rangers hike in Central Park.  It was specifically a bird watching tour for kids. 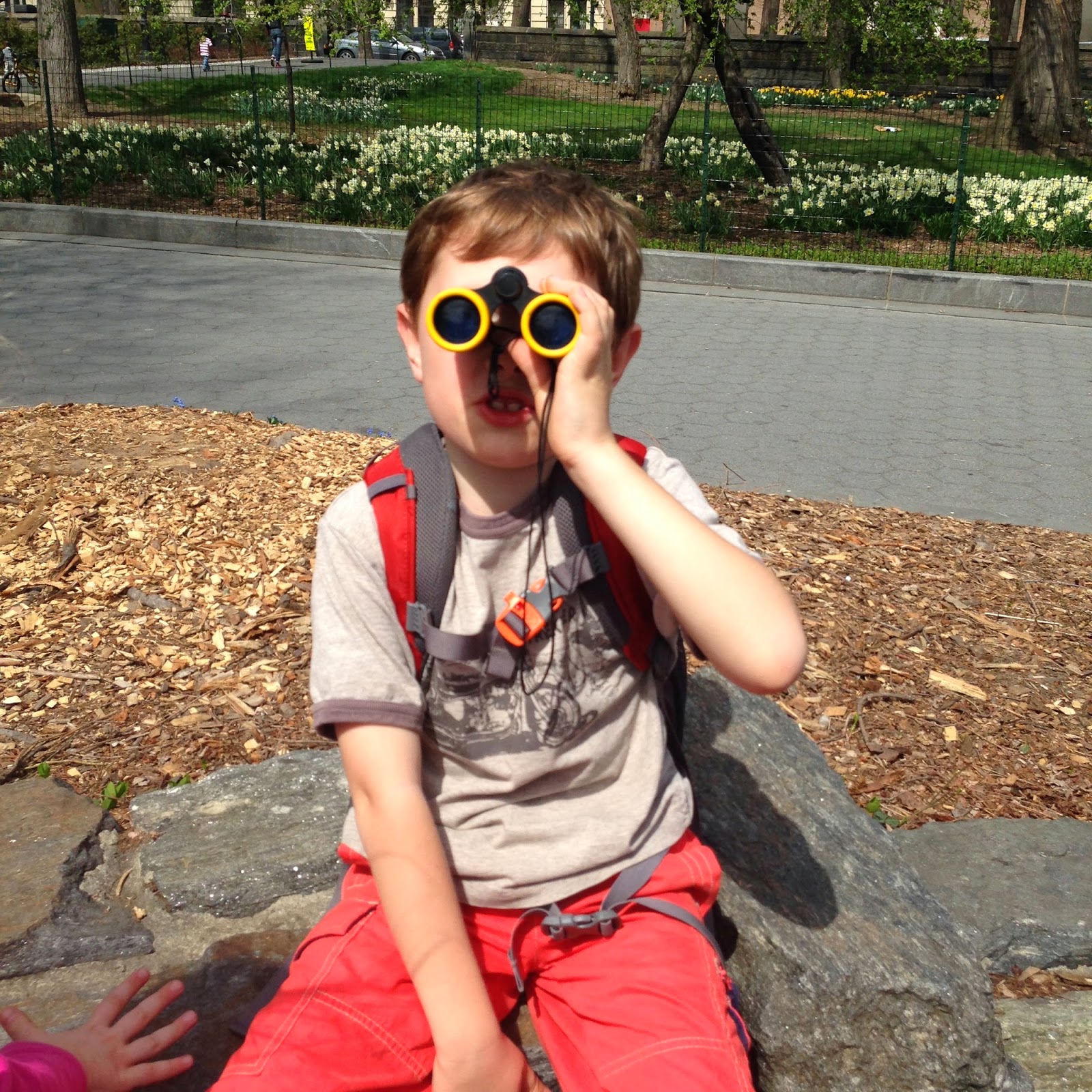 Central Park is a safe place for birds with few predators and lots of food, so it ends up acting as a breeding ground for the entire Northeast for many species of birds.  We also saw lots and lots of turtles and other wildlife on our two hour walk. 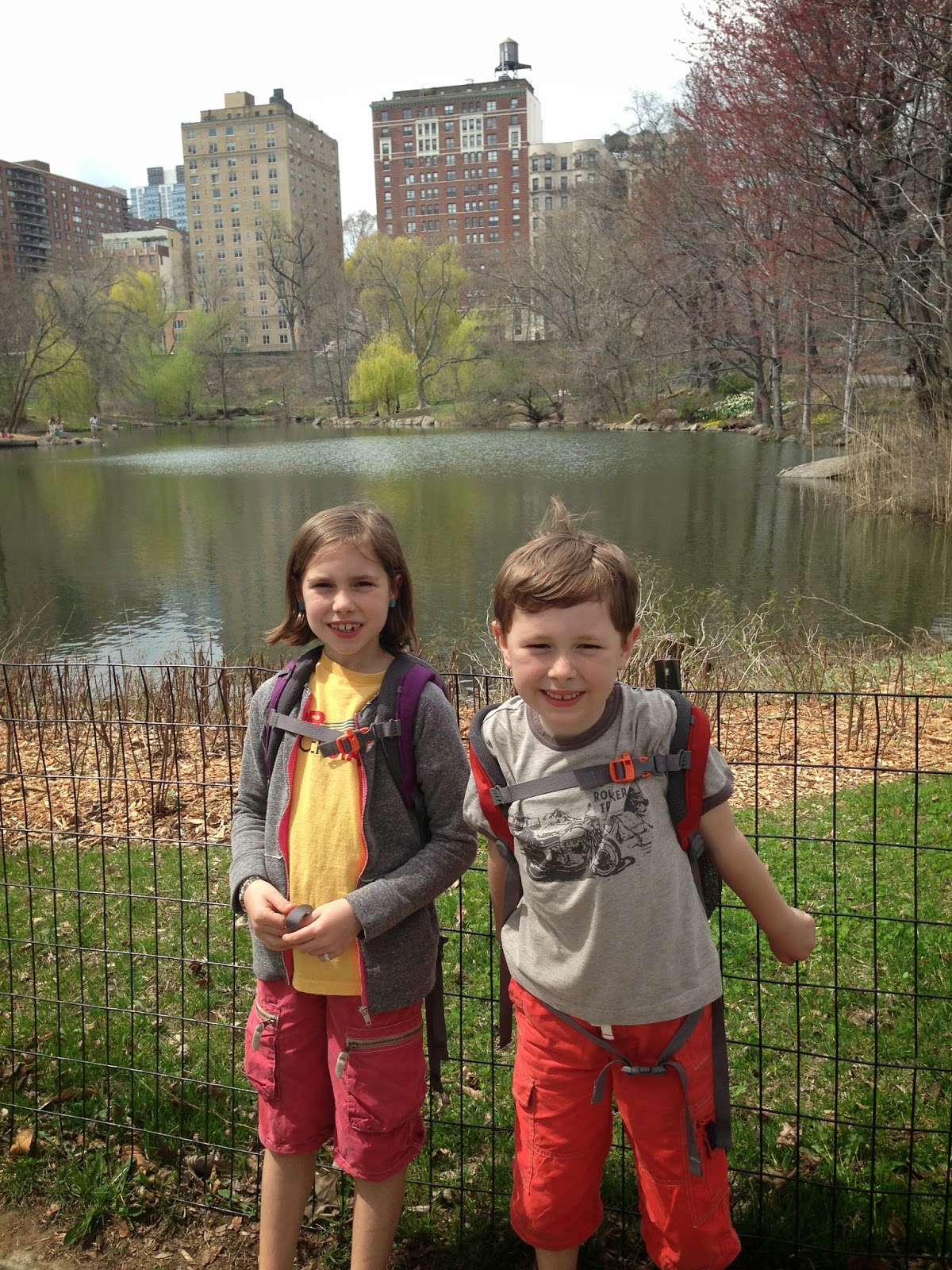 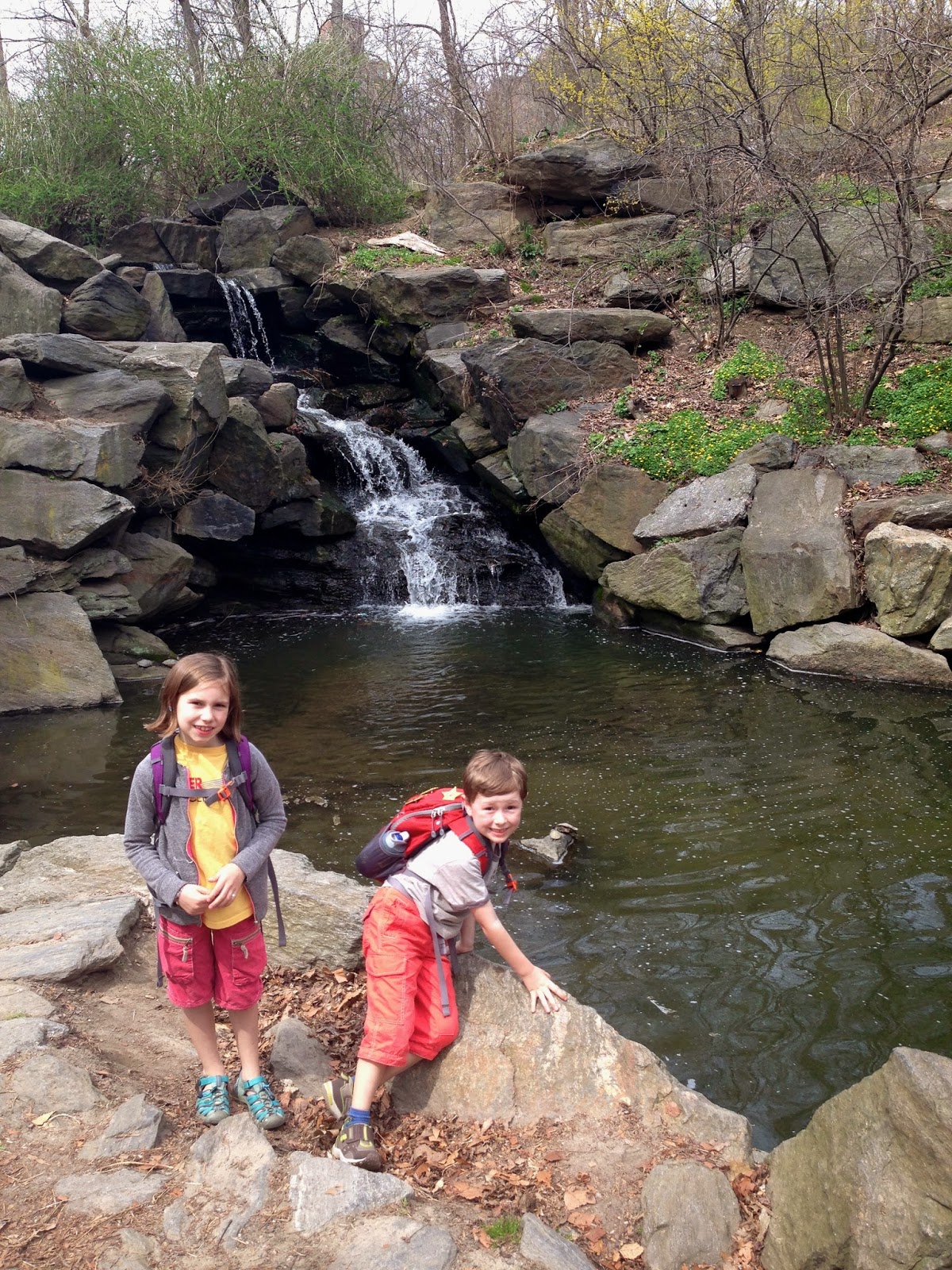 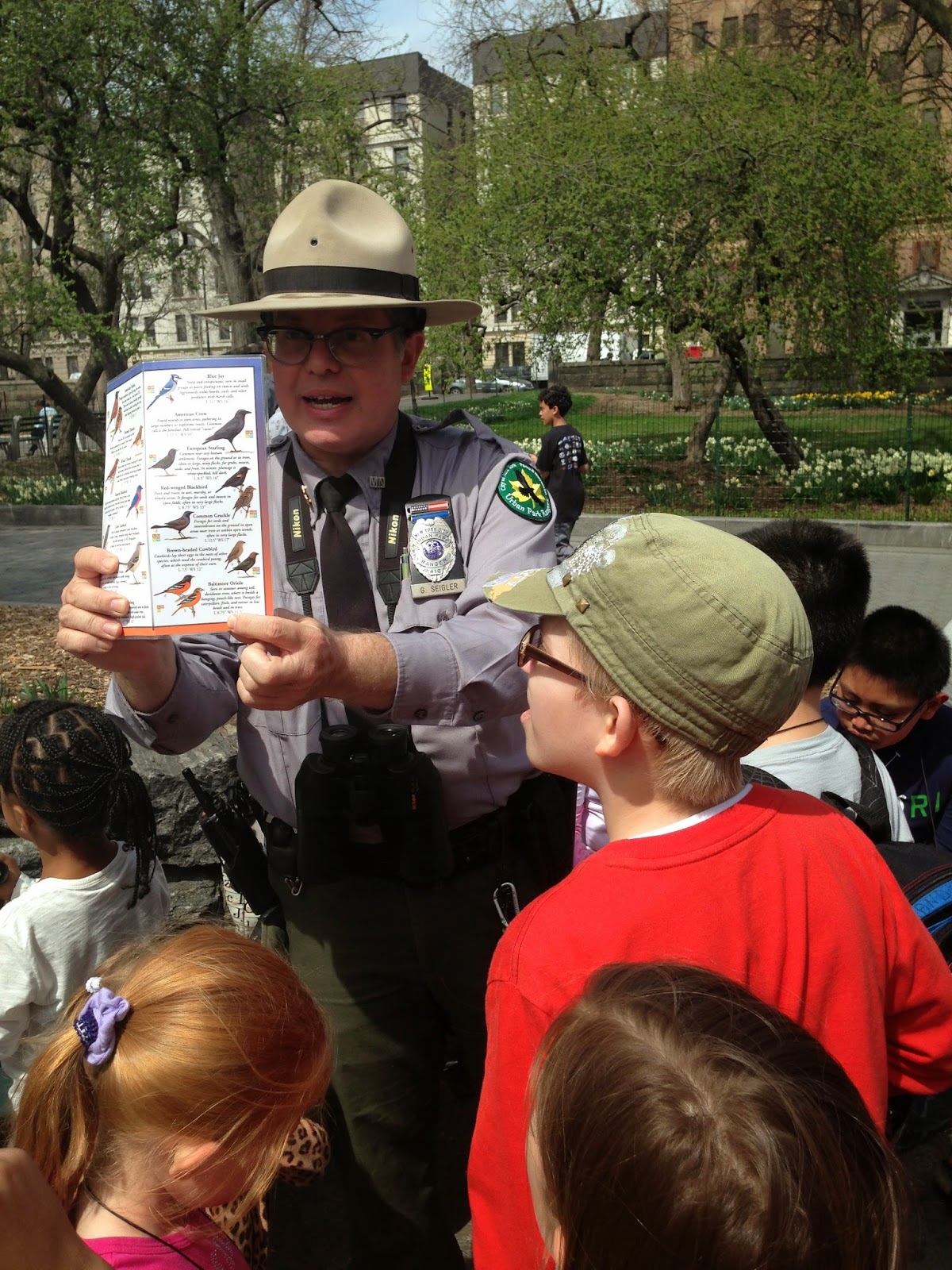 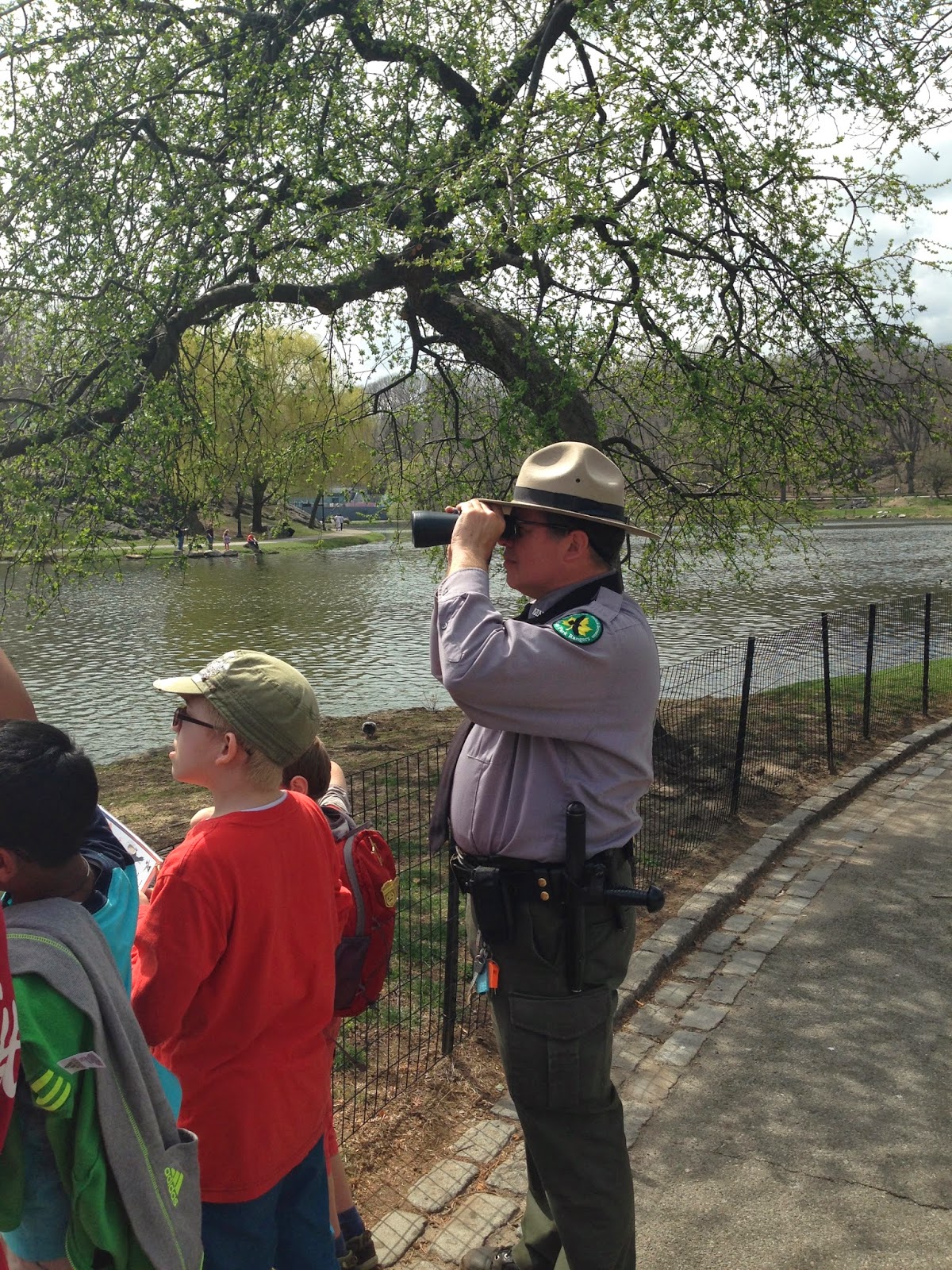 Ranger Jerry did a great job teaching us all about what we were seeing.  I was shocked to learn from him that there are only three Park Rangers for all of Manhattan (not just Central Park).  Now we know all of them. 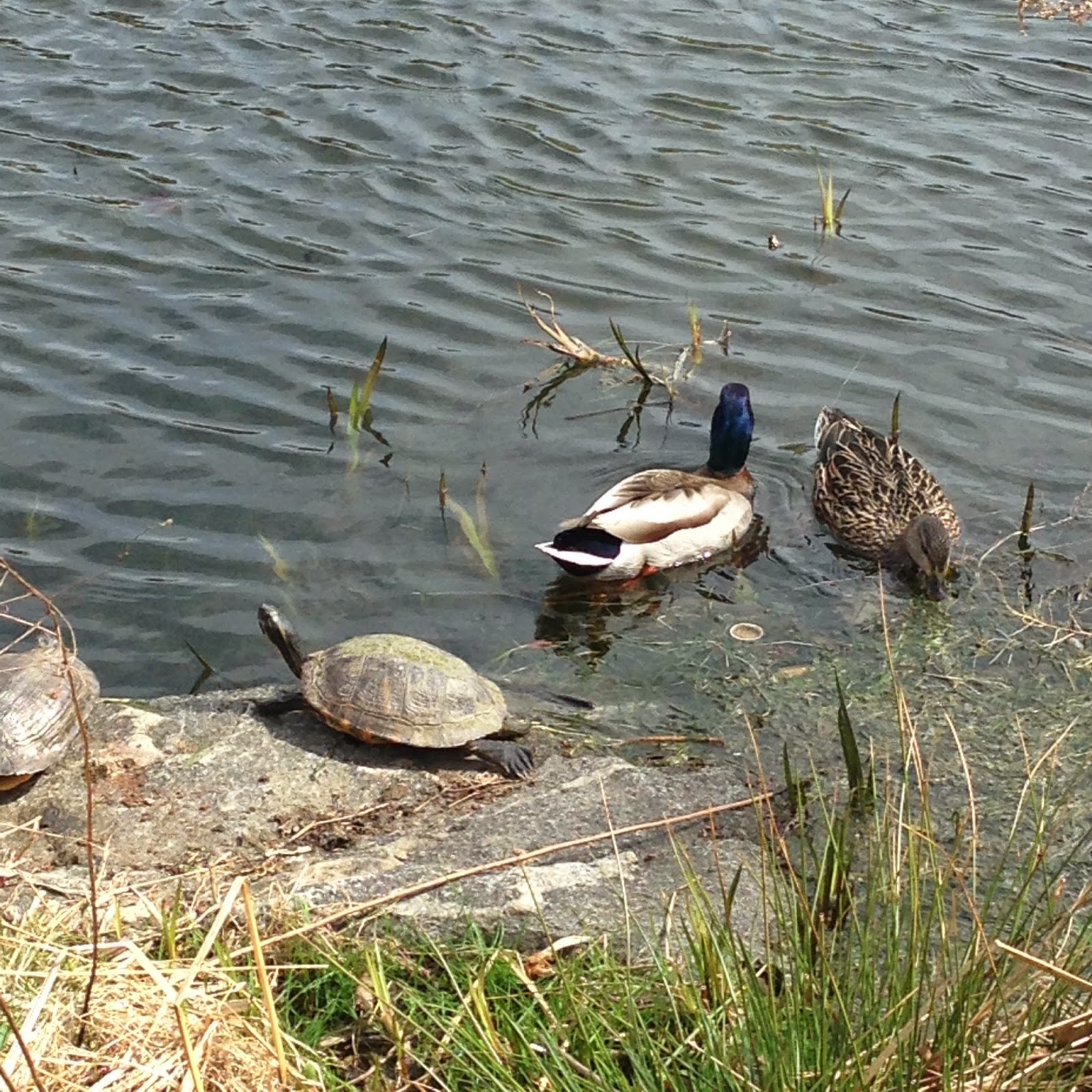 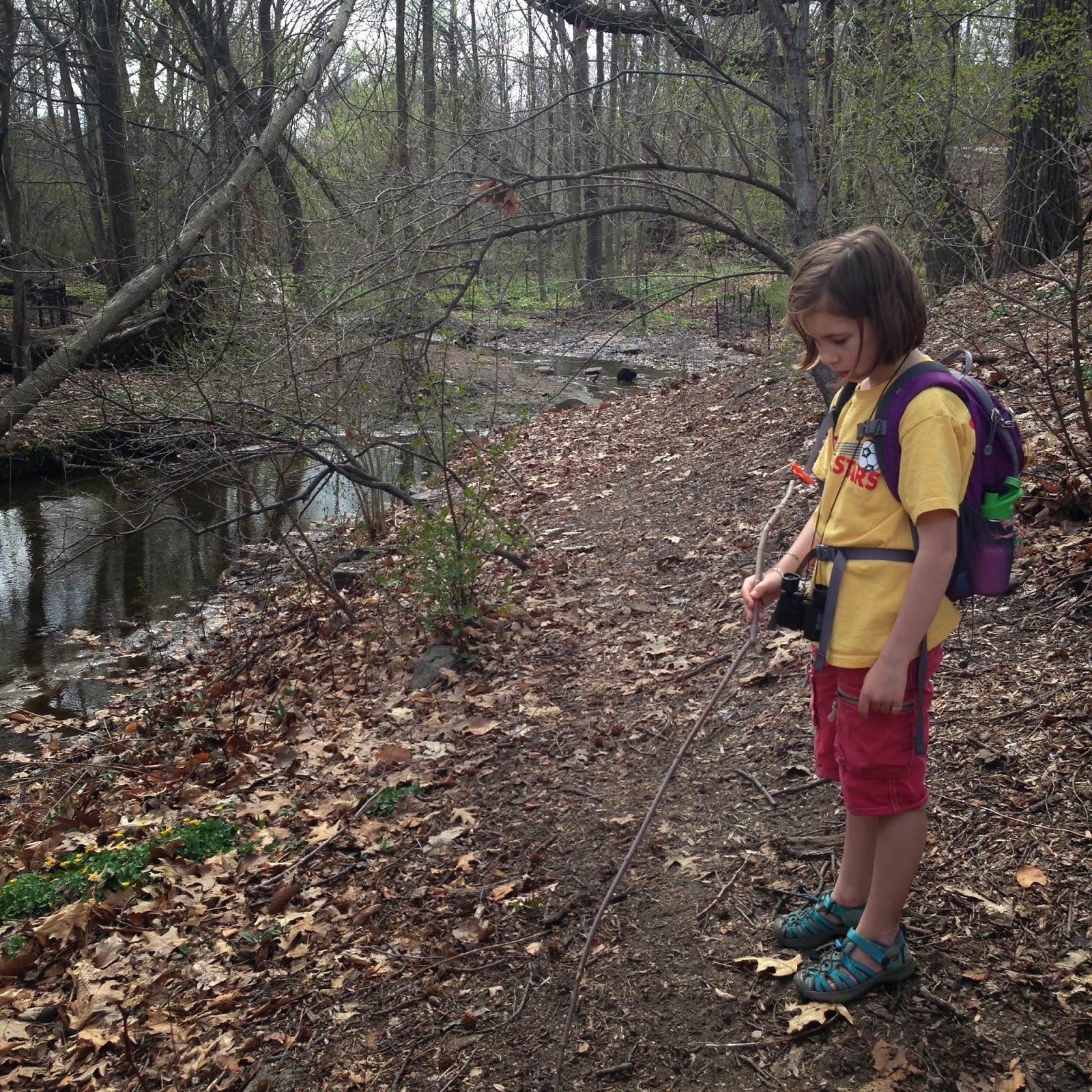 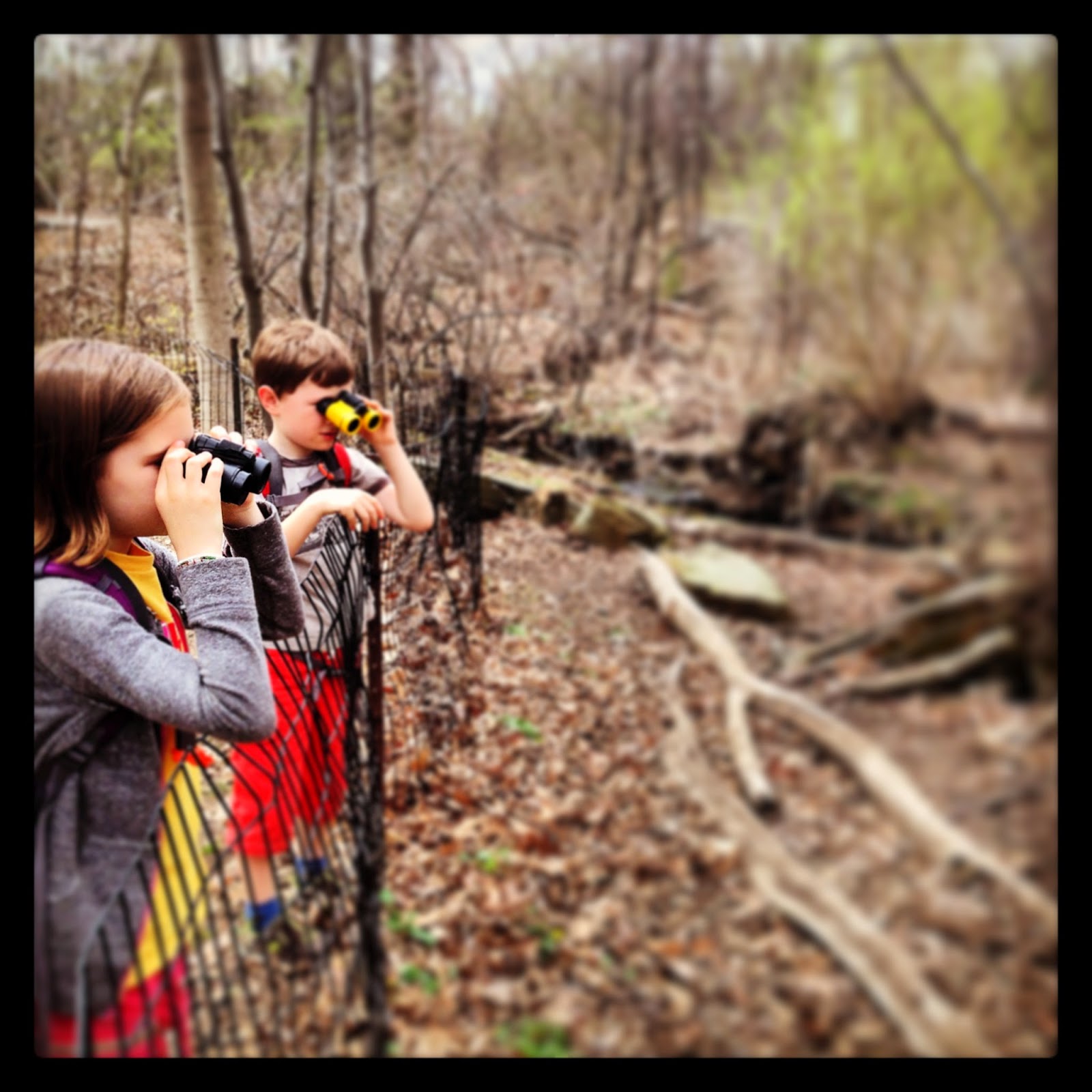 It's nice to be able to get out of the city on occasion, but this city wouldn't be nearly as liveable if we couldn't escape into the wilds of Central Park whenever we needed to.  You walk just steps into the park and you're a world away from the hustle and bustle, noise and traffic.
Posted by Gretchen at 9:19 AM