I've got lots of pictures so I'll keep the words to a minimum. 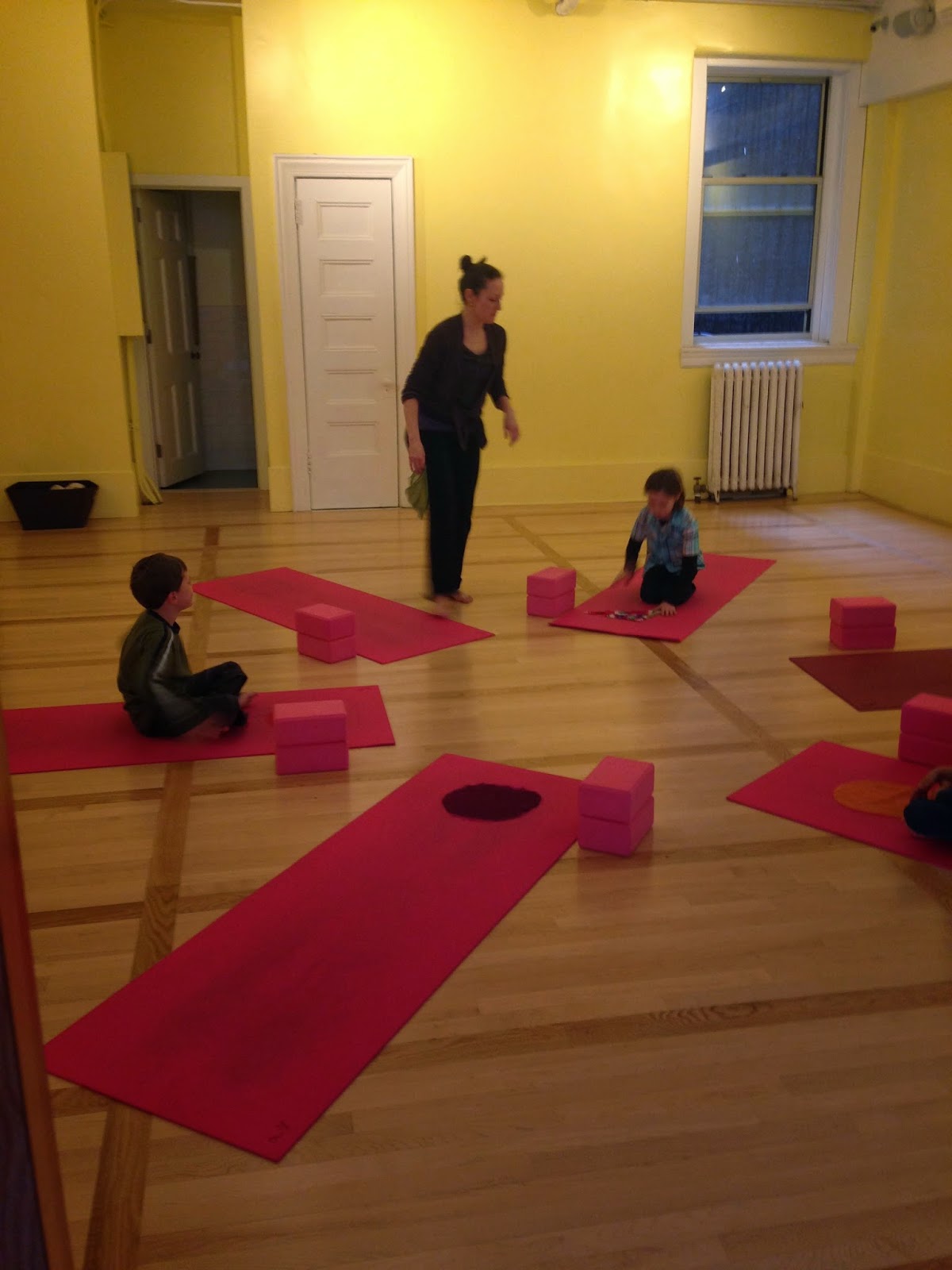 The kids and I continue our yoga obsession.  I'm at the studio three to four times a week.  Ella and Holden still take their Thursday kids' class and Holden does his best to wrangle me to the Saturday morning parent/child class. 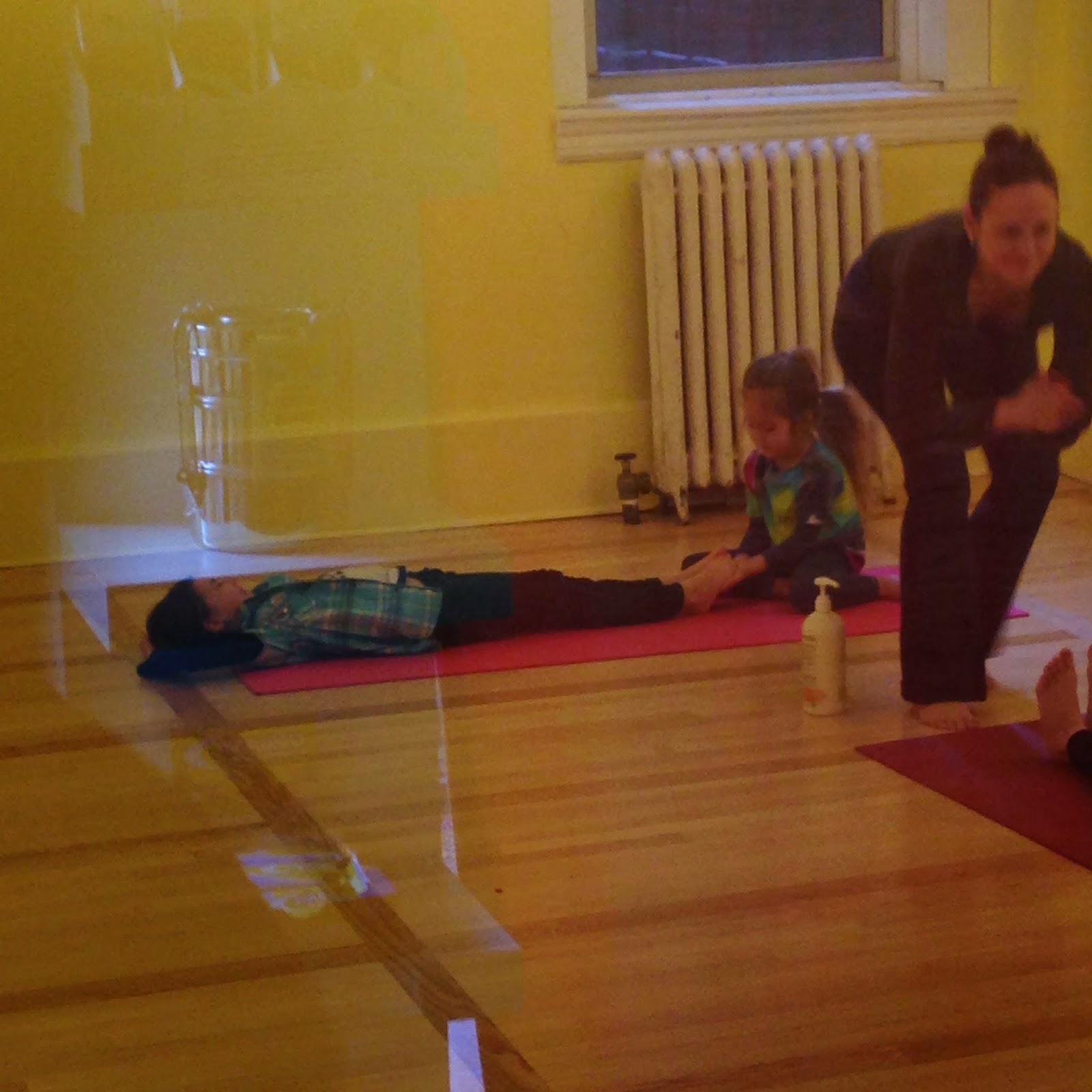 I'm starting to figure out why Ella likes the kids' class so much.  They end with foot massages.  Holden of course lets no one anywhere near his feet. 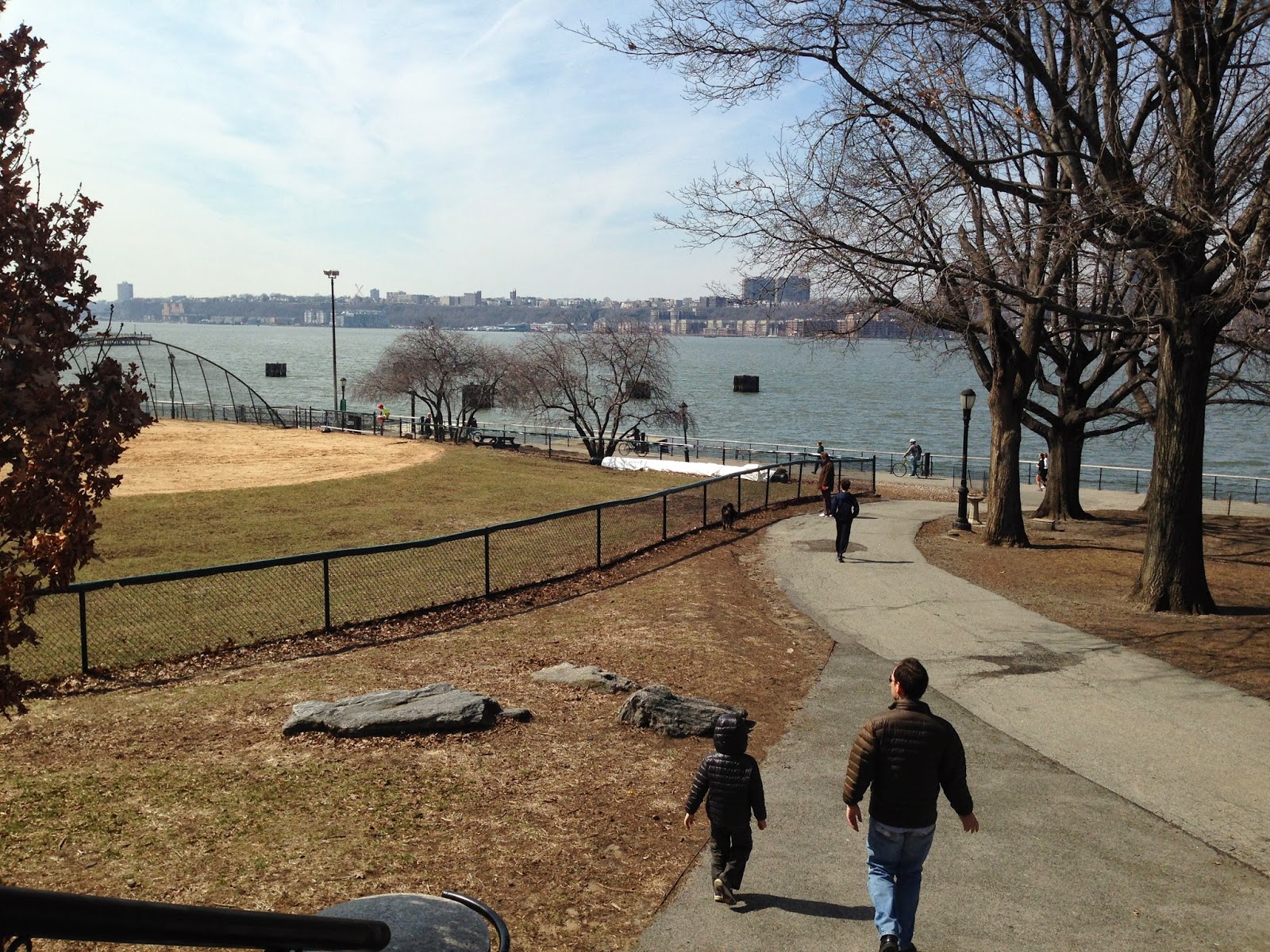 Saturday morning the kids had an appointment to get their teeth cleaned so we decided to walk from our place down to their dentist on West 61st Street.  We took a new path along the river which turned out to be a very nice surprise.  There is a really beautiful walking path dotted with sculptures and gardens (or what appear to be gardens once the temperatures rise). 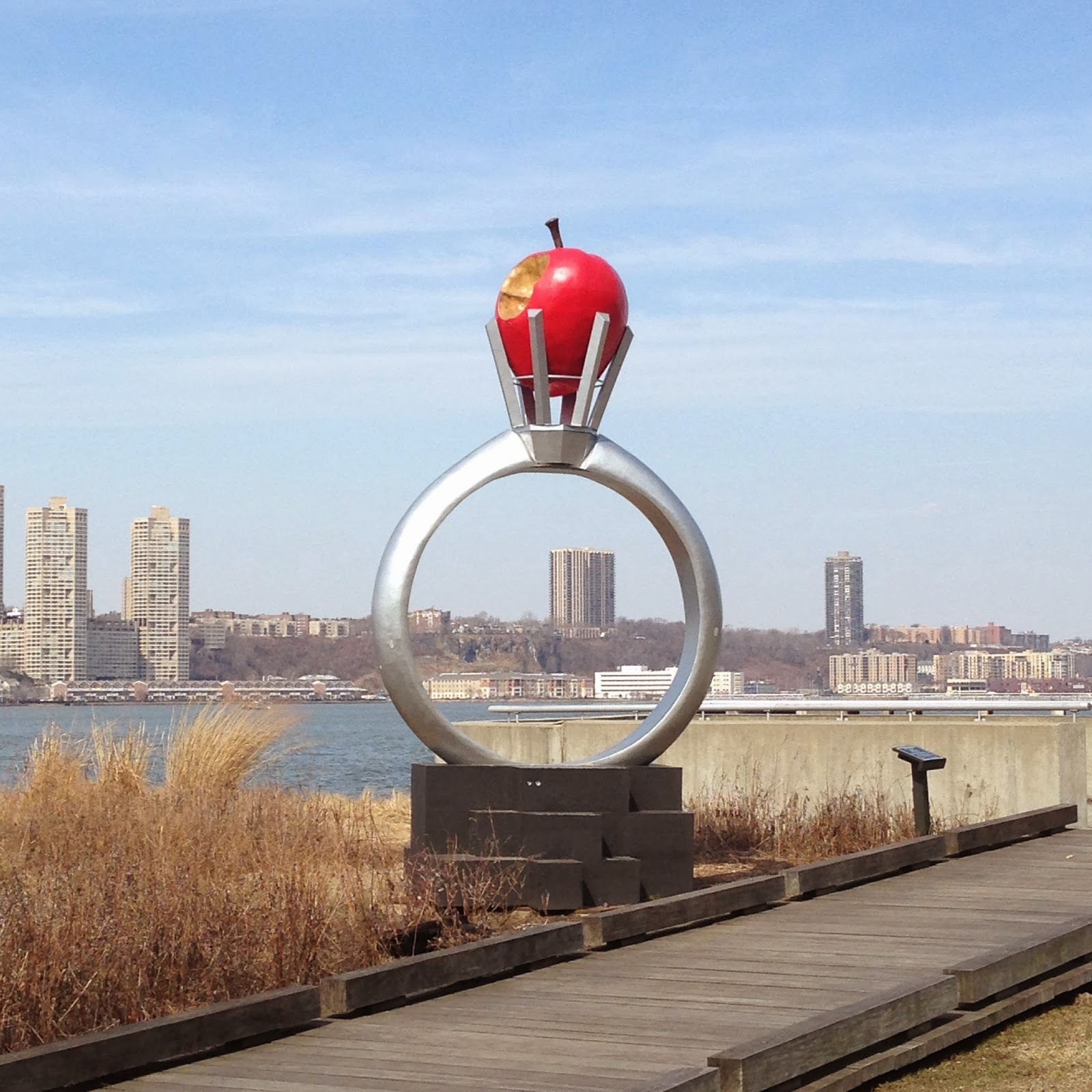 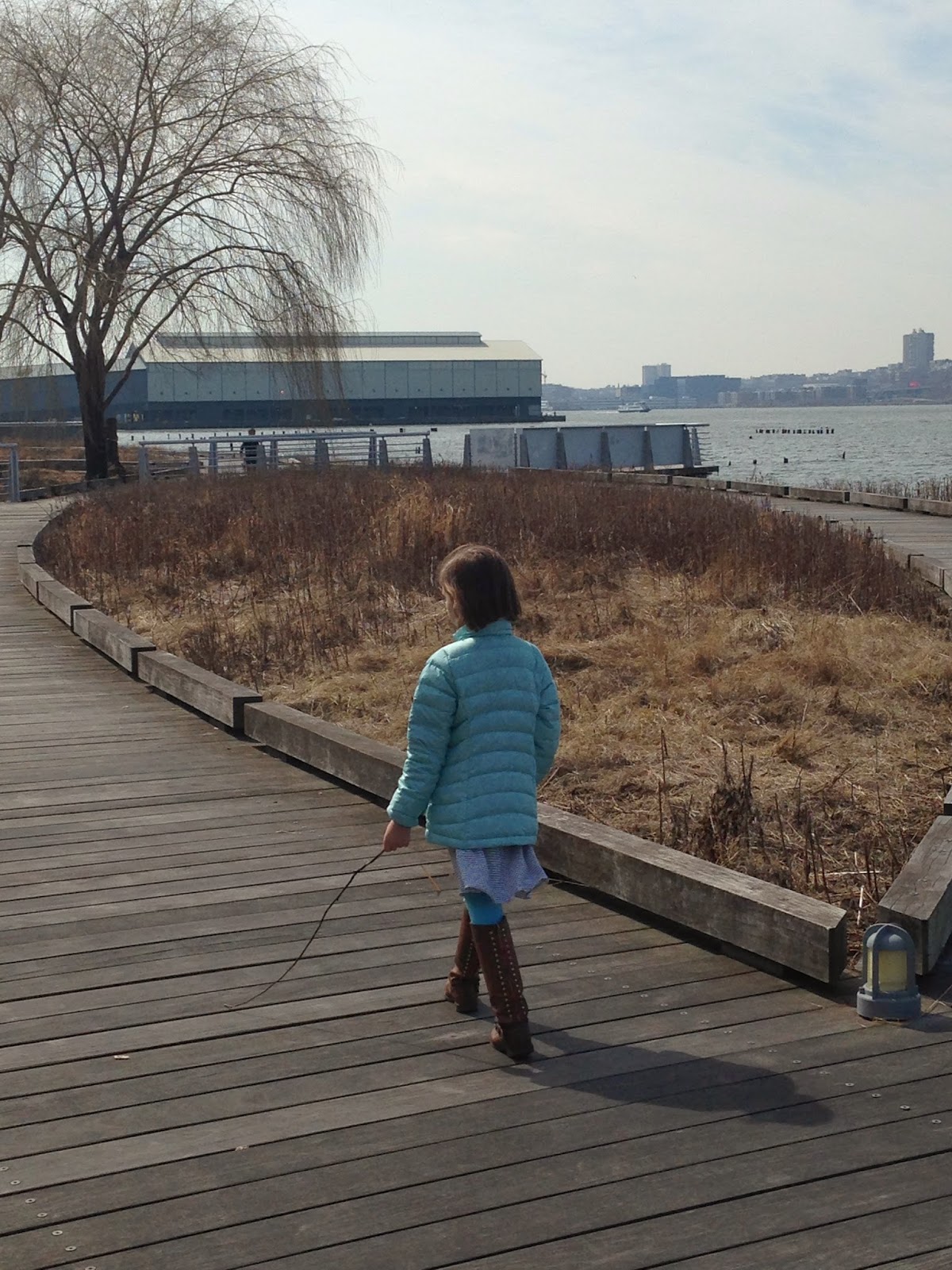 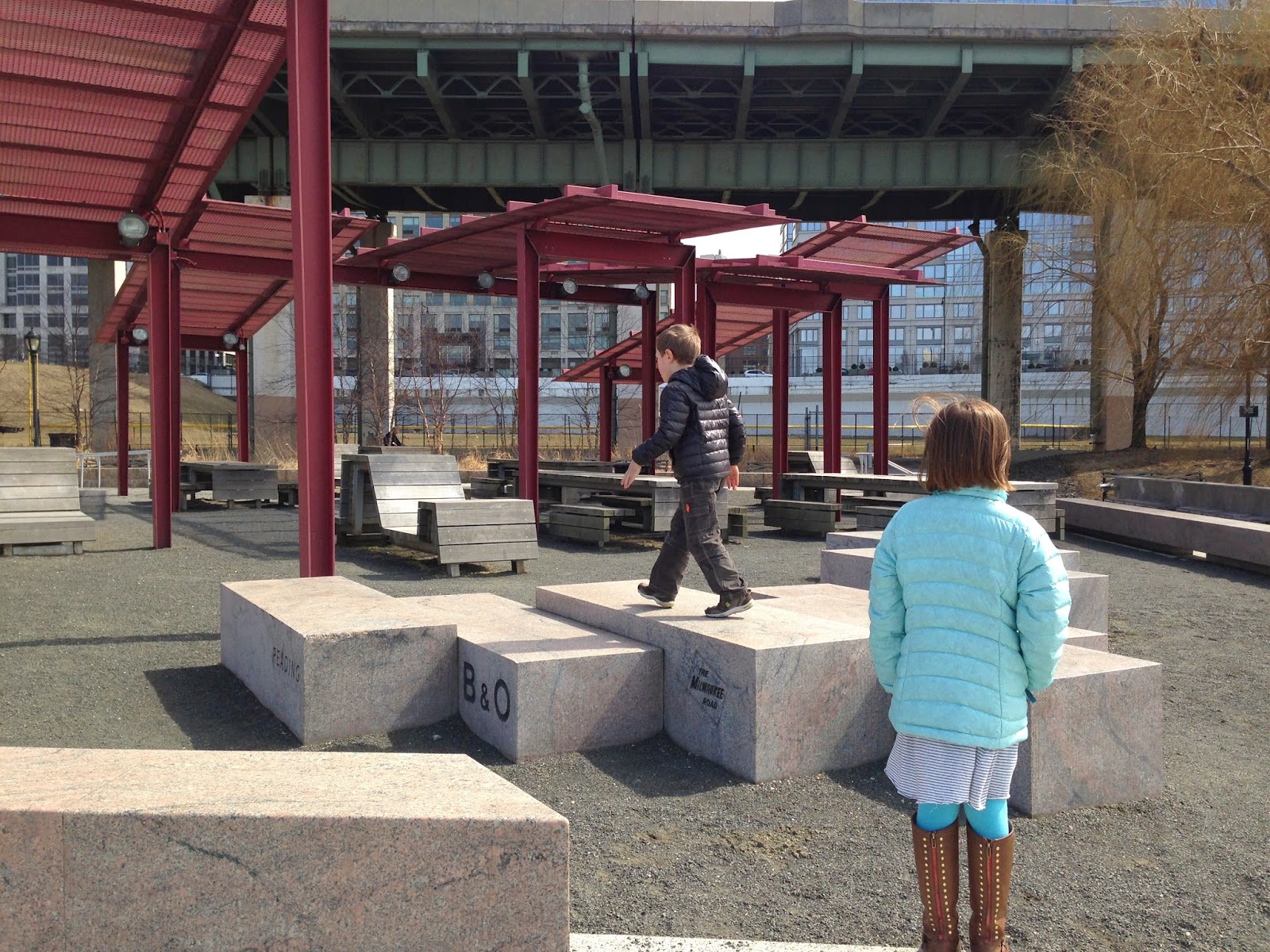 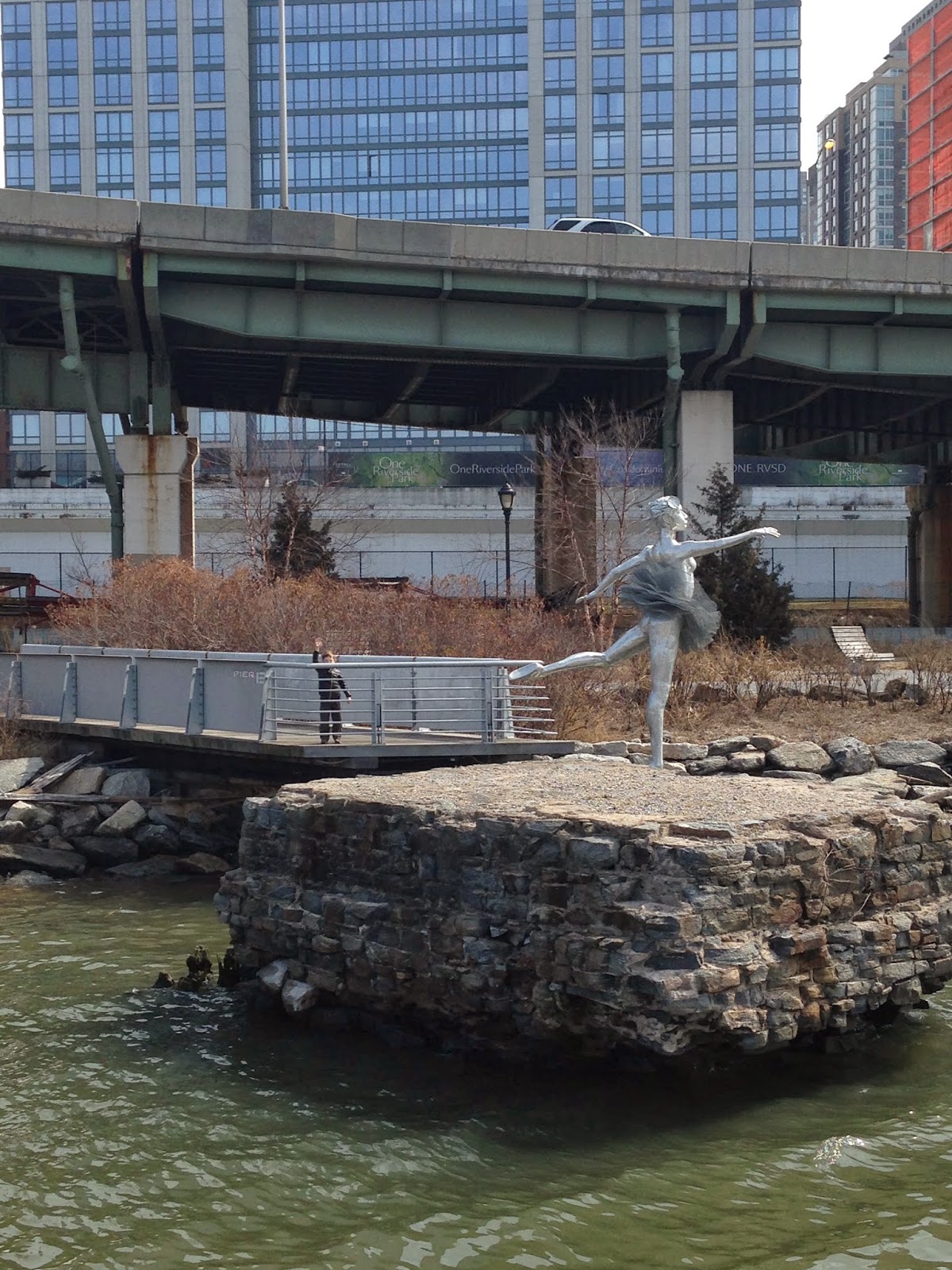 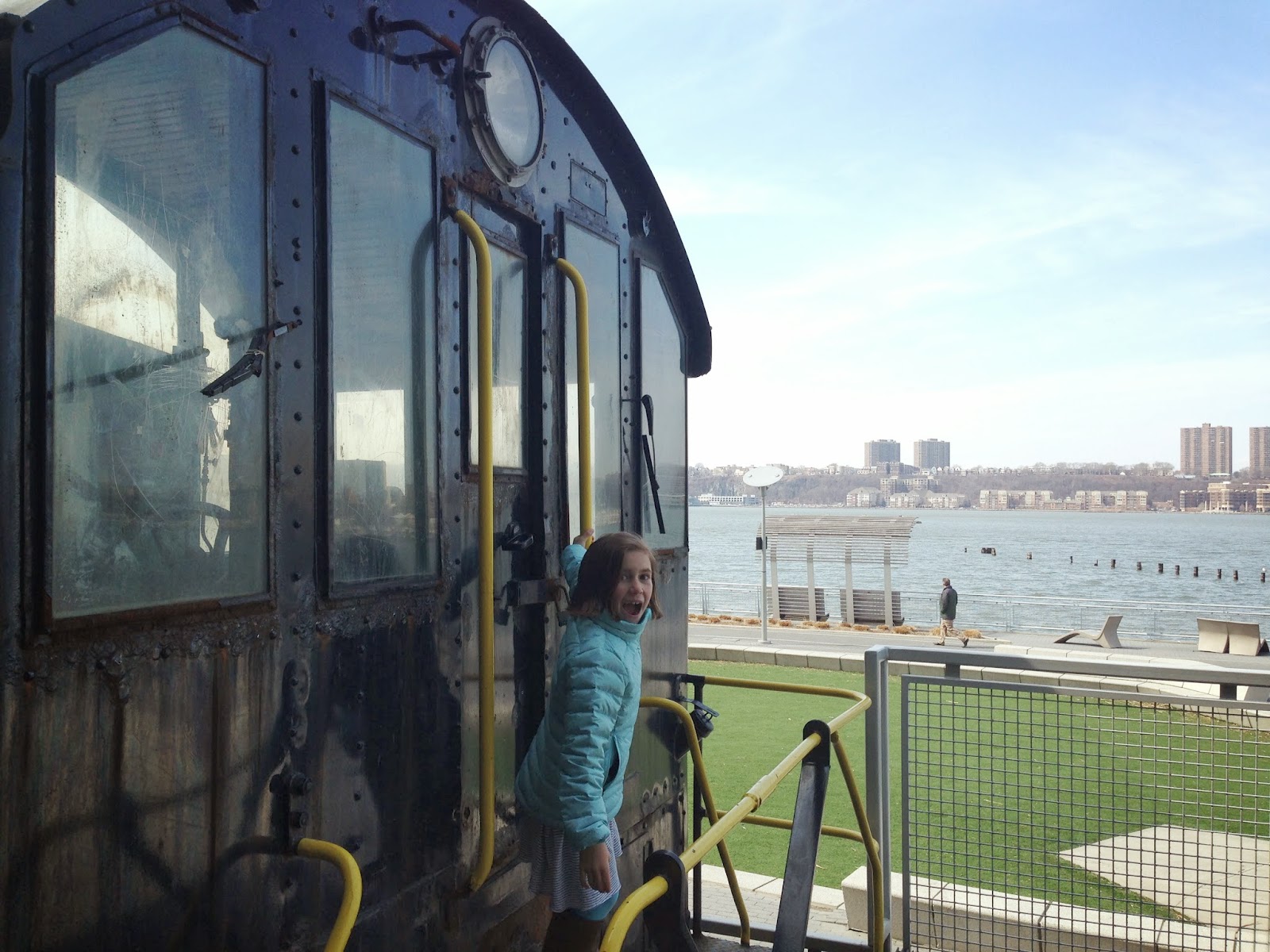 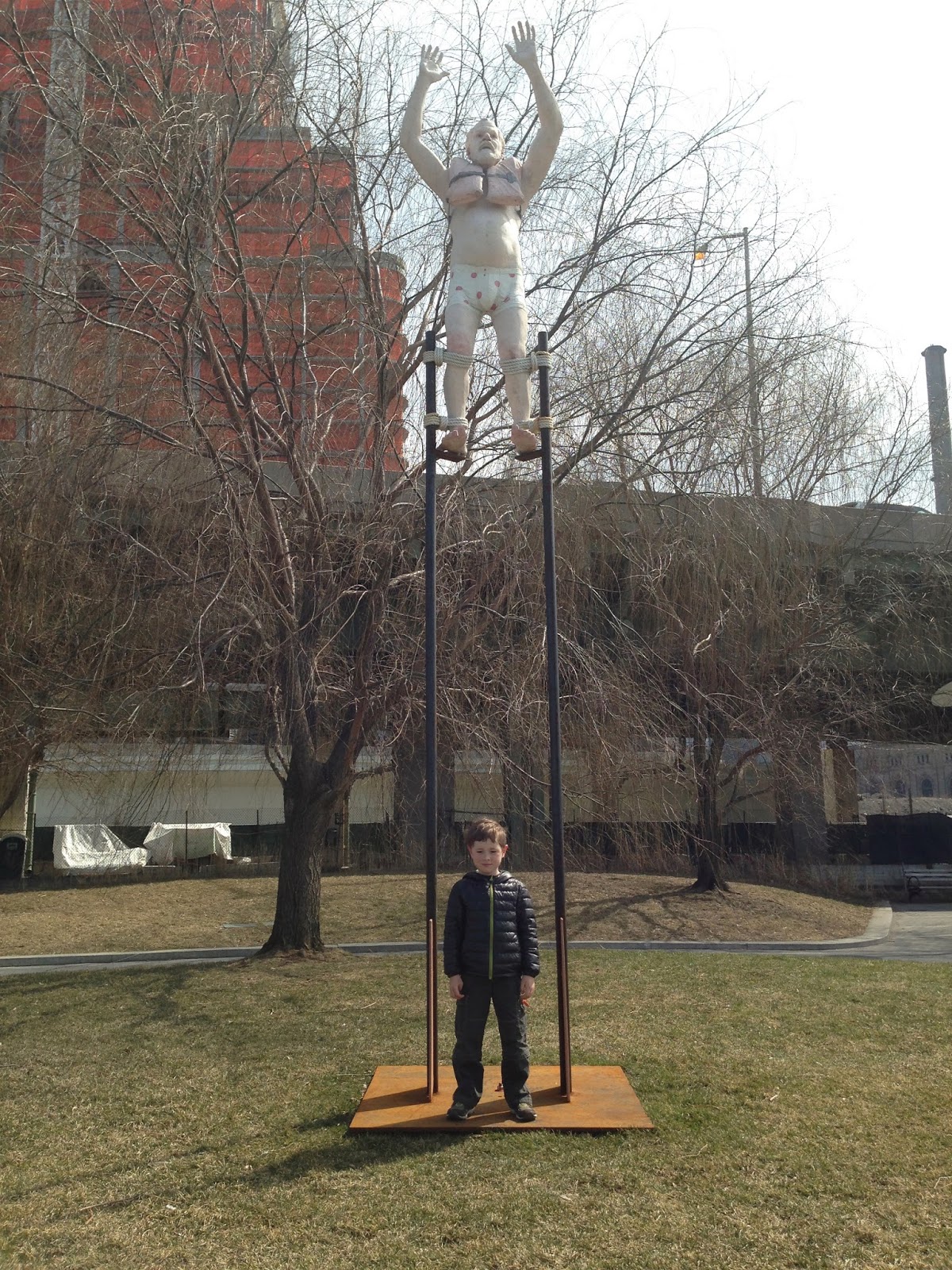 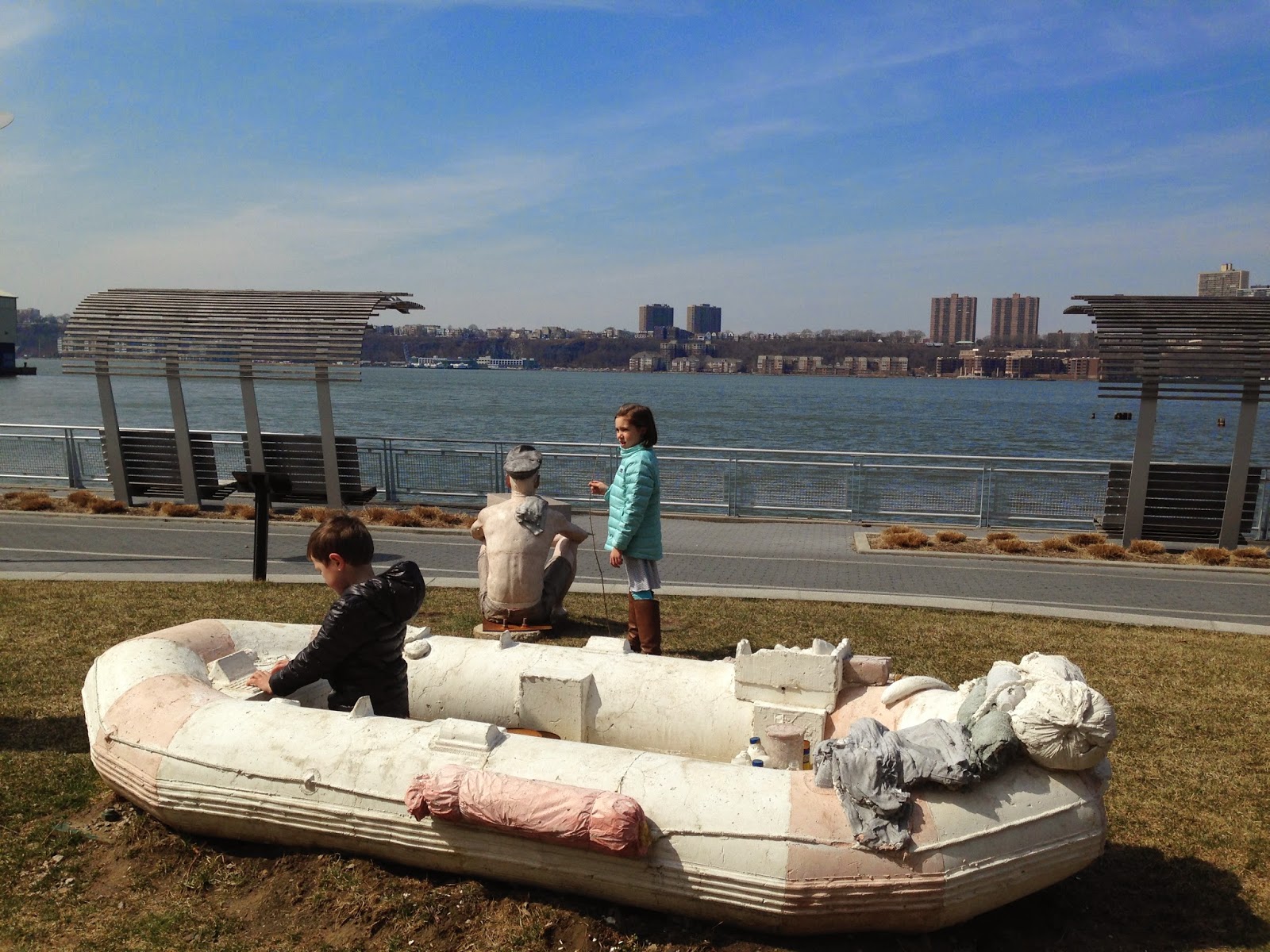 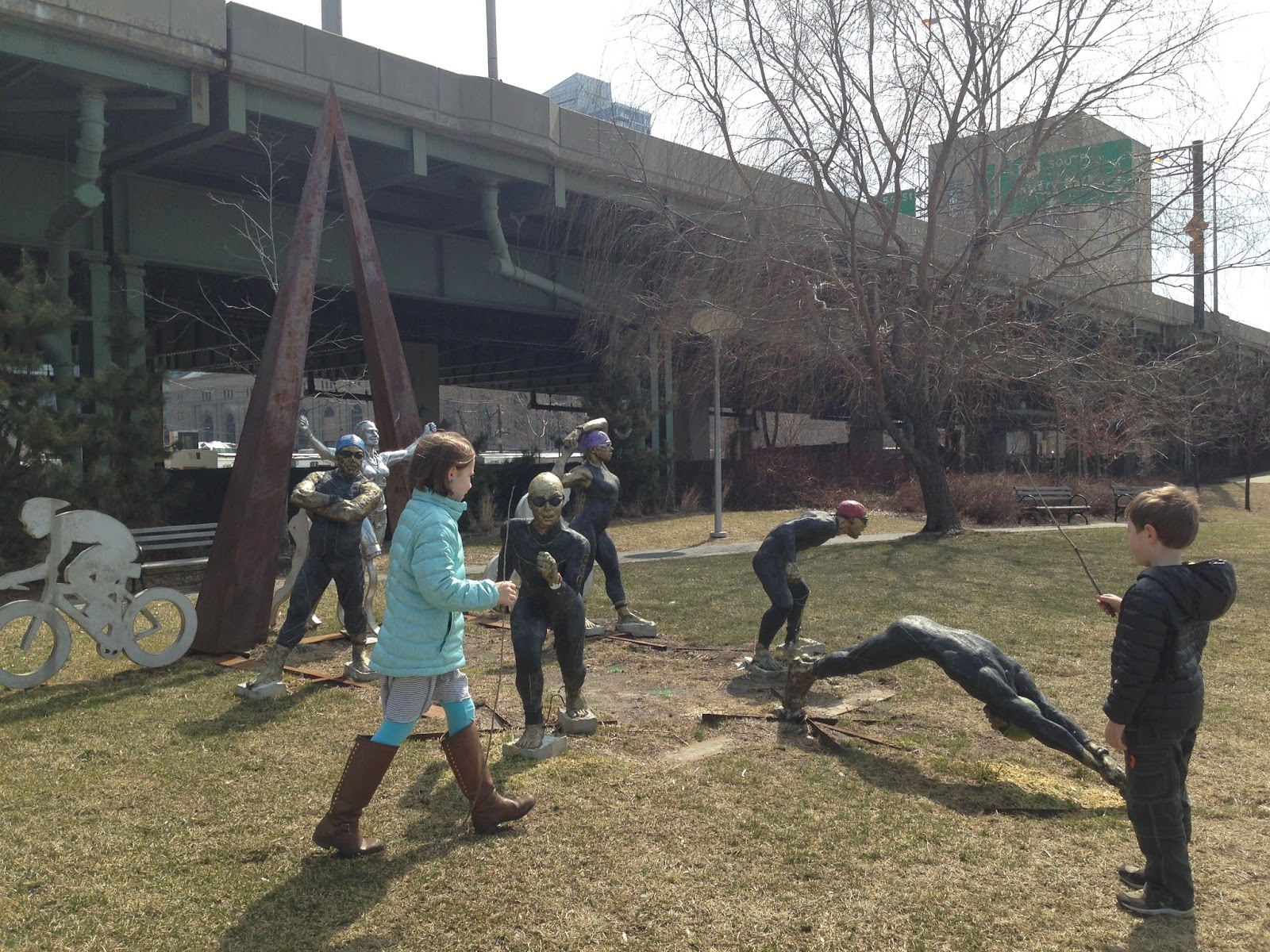 One of the things I love most about New York City are the secret gardens and walking paths and sculpture gardens hidden under overpasses or along the river, right in the middle of a bustling city.

Another thing that we often find hidden among highrises are very old churches. 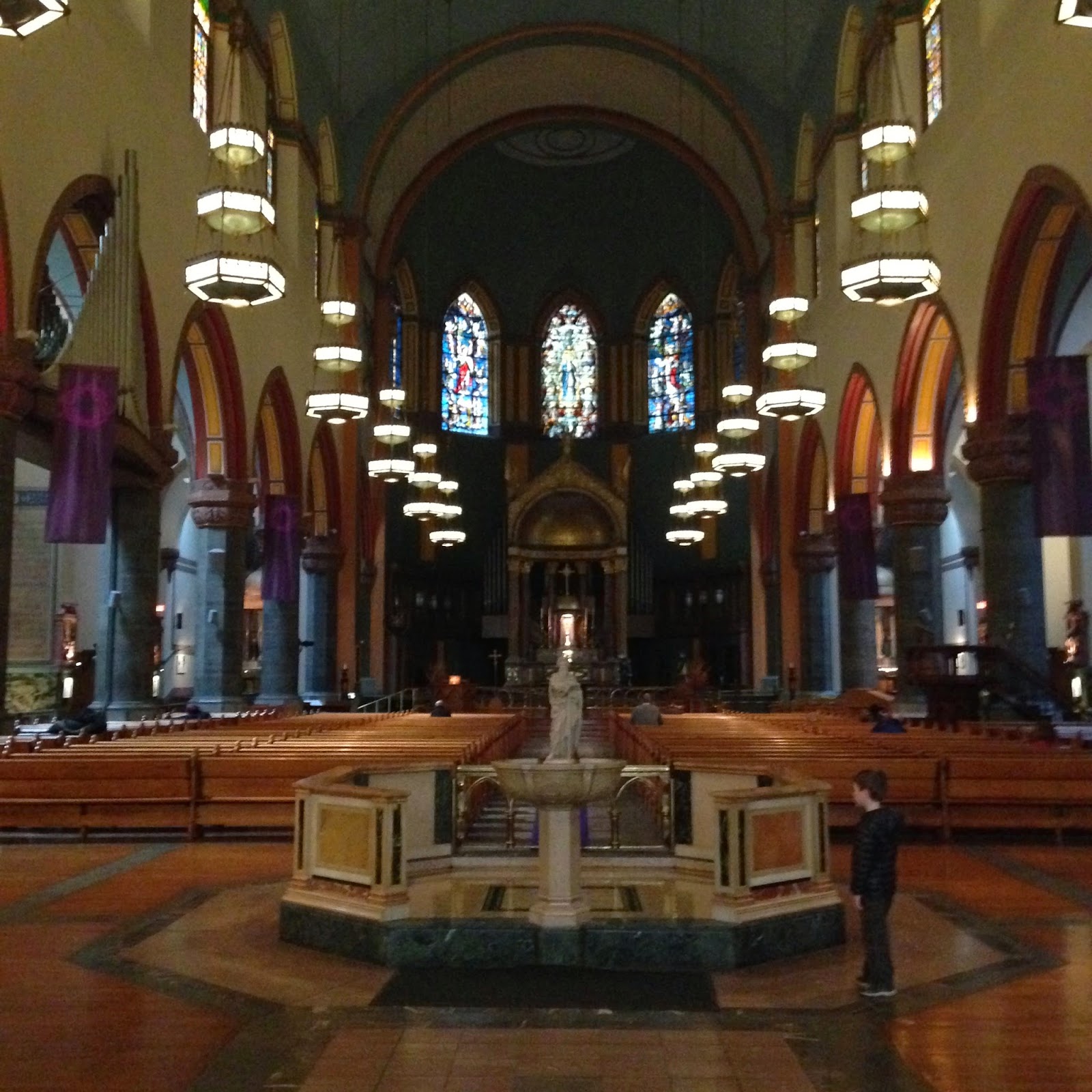 If we have time we often pop in to take a look.  This enormous Gothic church (The Church of St. Paul the Apostle) is 150 years old and once dominated the block.  Now it's dwarfed among highrises and only visible if you're standing right on the same block. 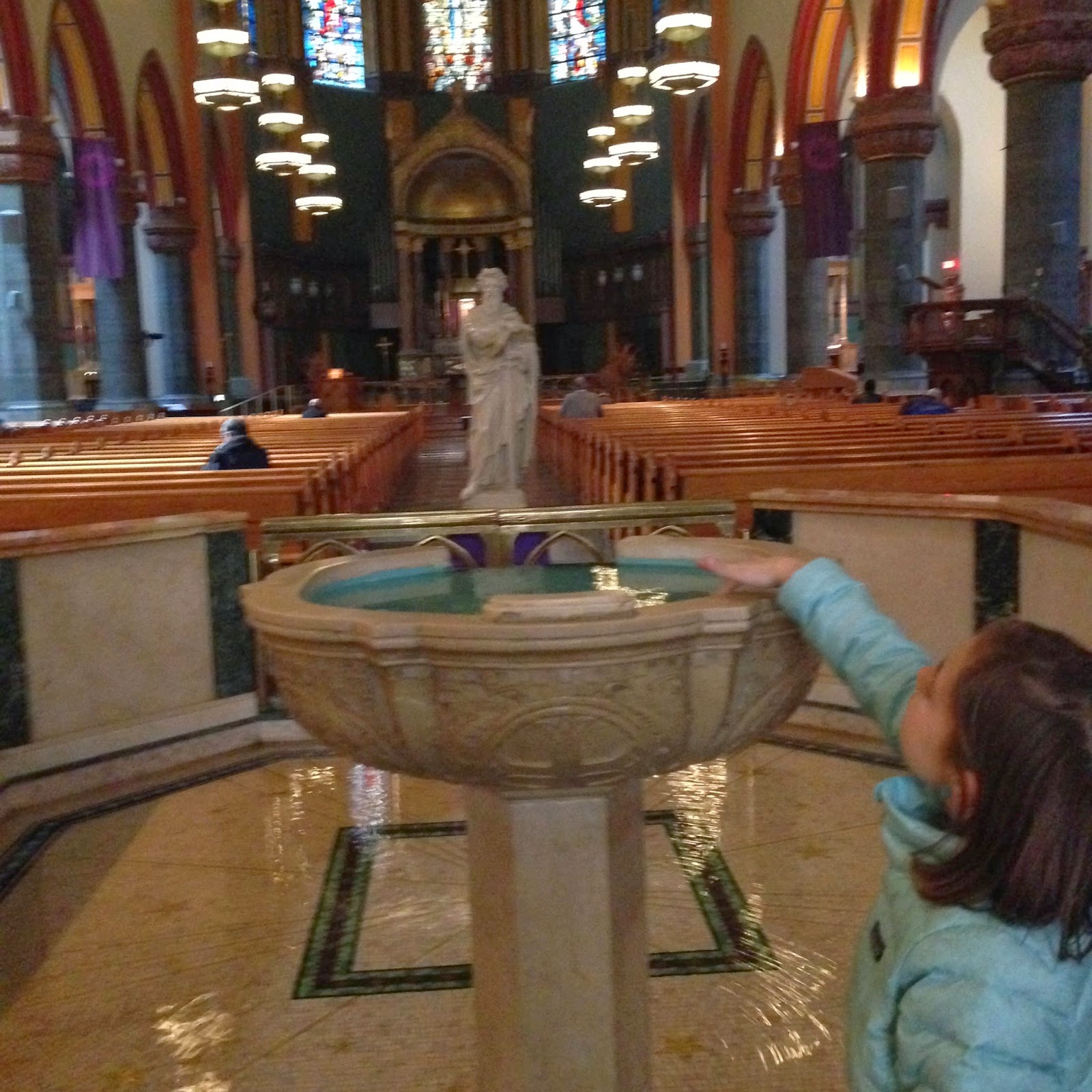 After their teeth were sparkly clean, we found our way back down to Greenwich Village. 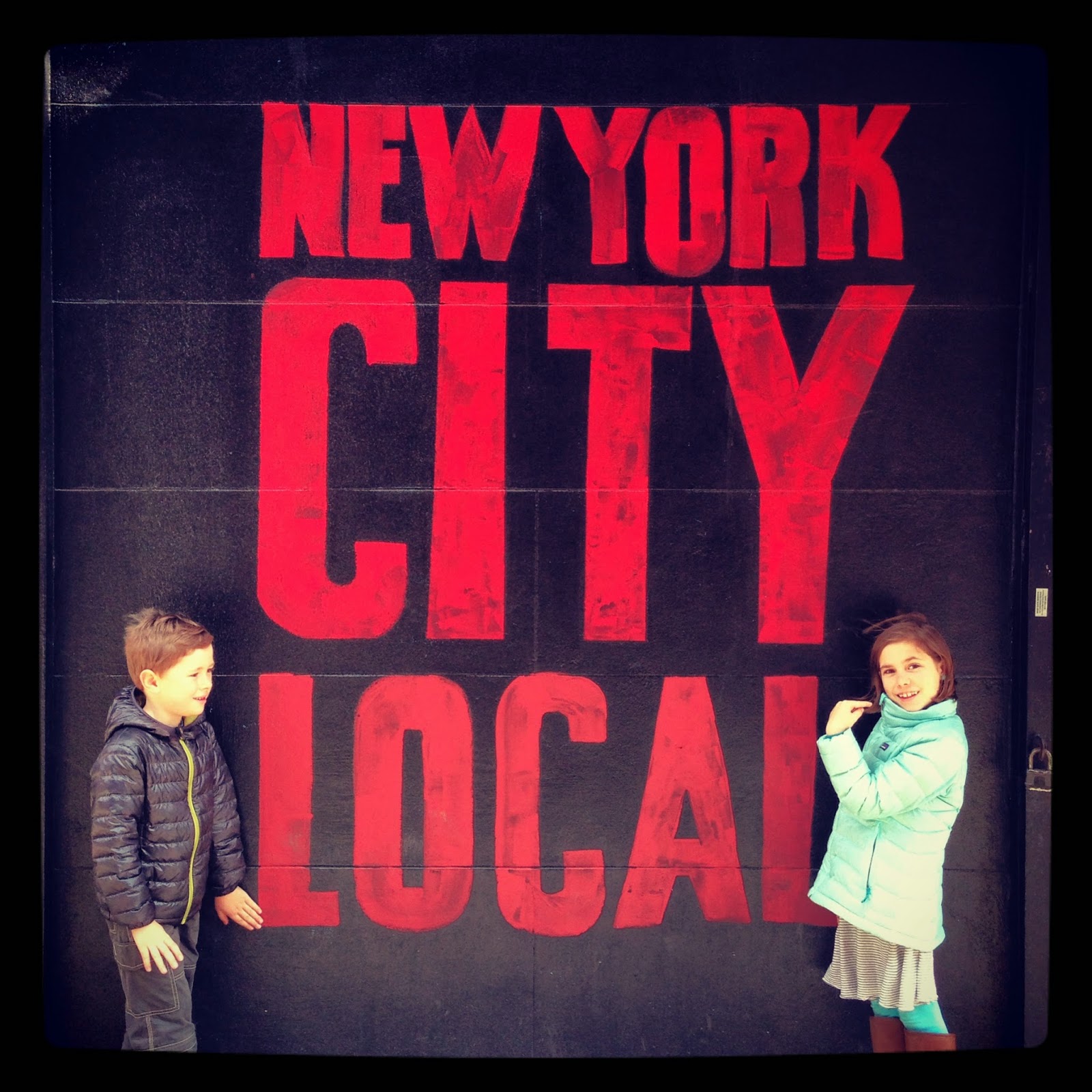 We saw a movie at the International Children's Film Festival called Ernest & Celestine.  I highly recommend it to my friends with young children.  It was nominated for Best Animated Feature Film this year at the Oscars.

Then we made our way to a chess store we walked past a few months back.  Holden has really gotten into chess this year.  He's in Chess Club at school.  Ella also has chess taught in her class once a week.  We had originally planned just to look at all of the amazing chess sets they have for sale but it turns out they have a room off the back where people pay to play chess.  We watched for a couple minutes and the owner quickly got Ella and Holden to sit down at their own table and play a game. 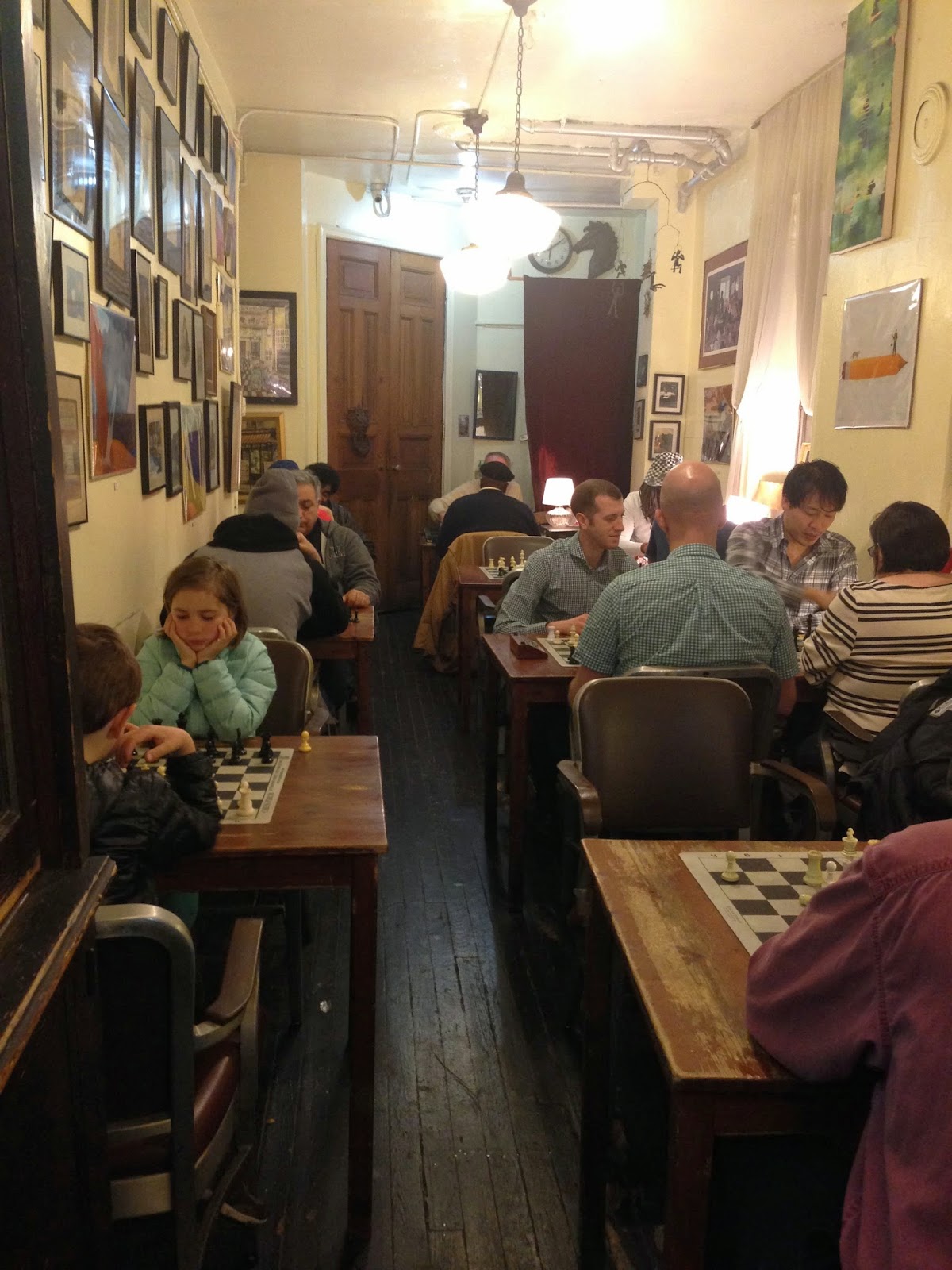 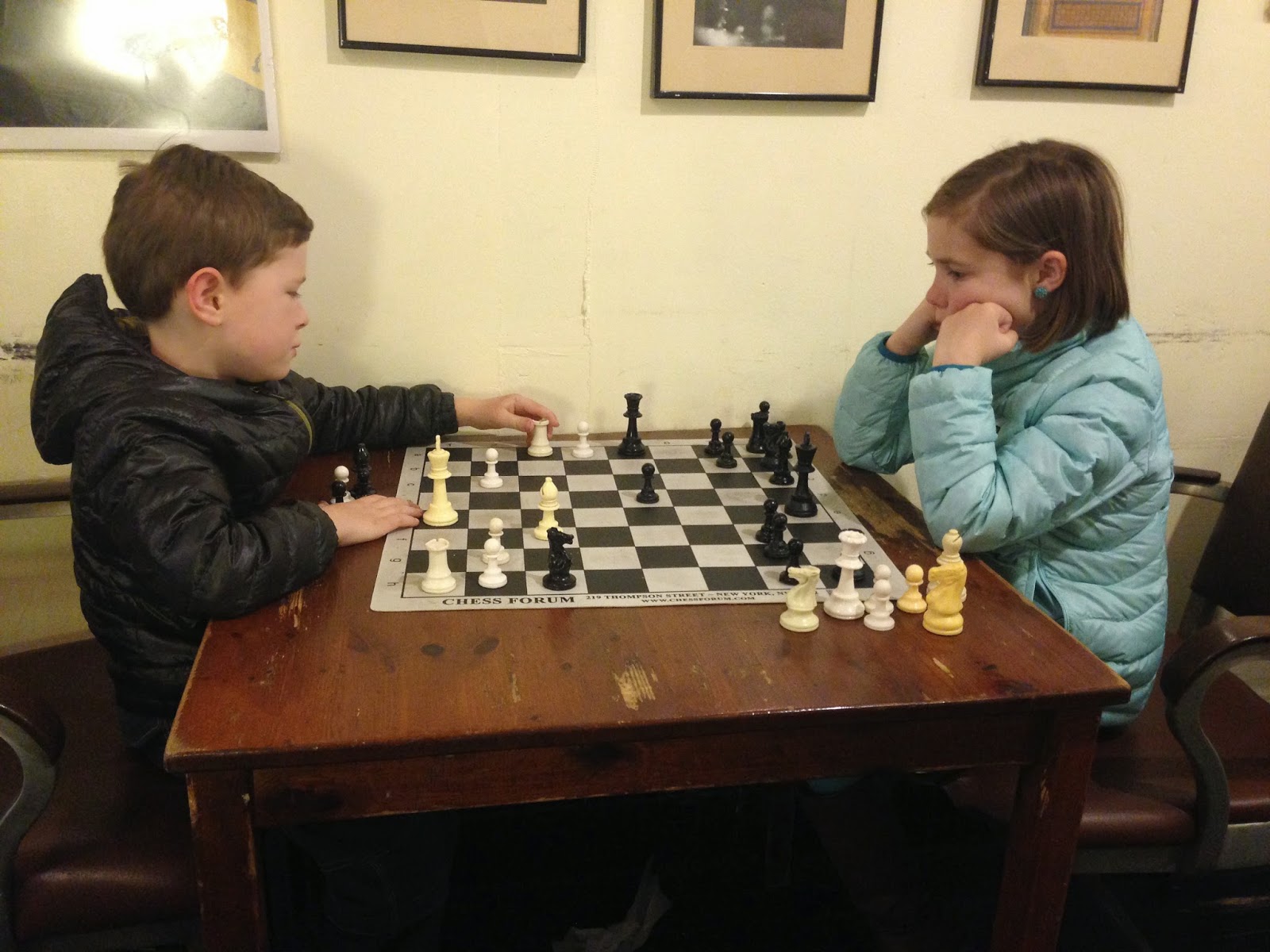 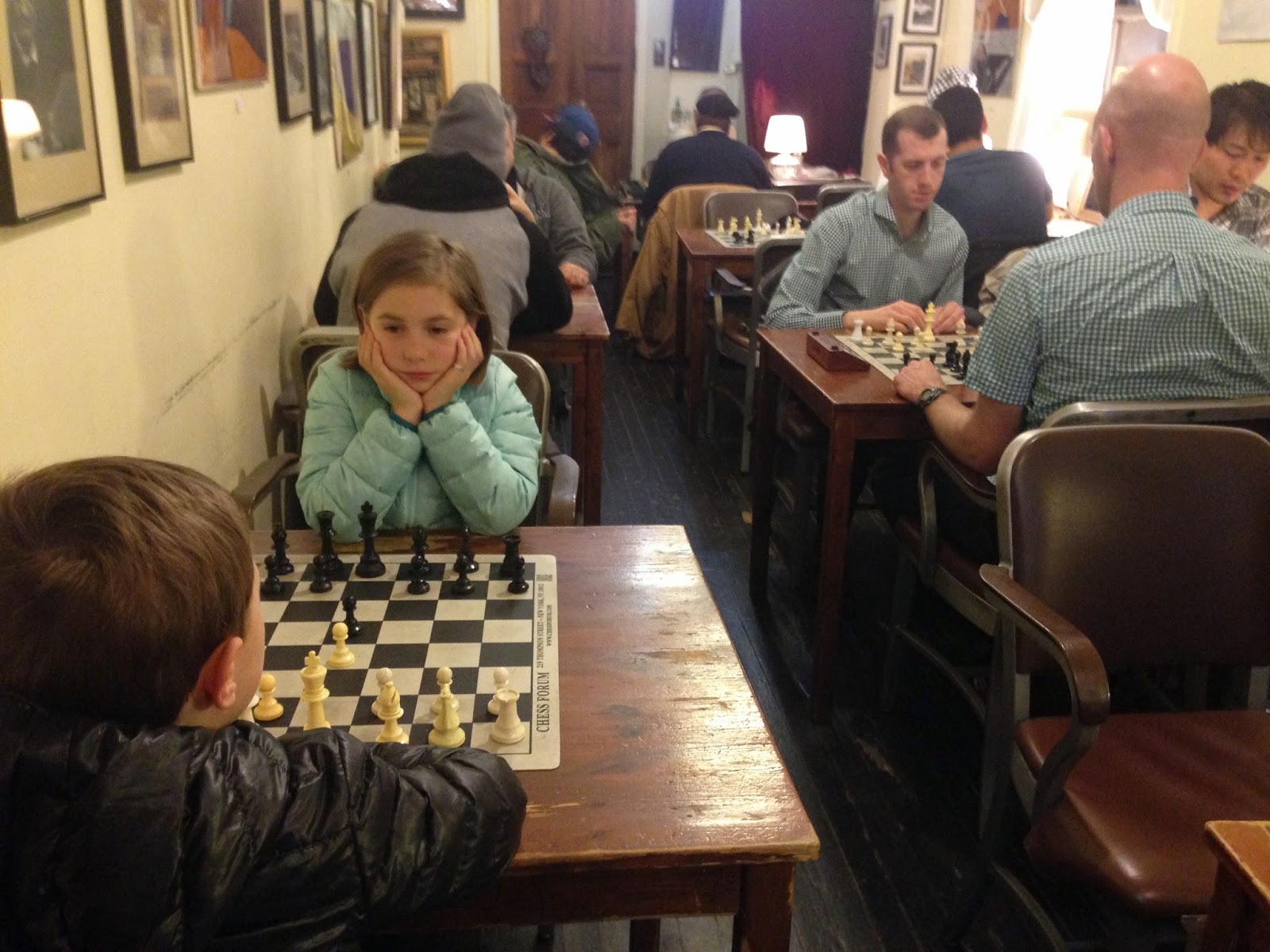 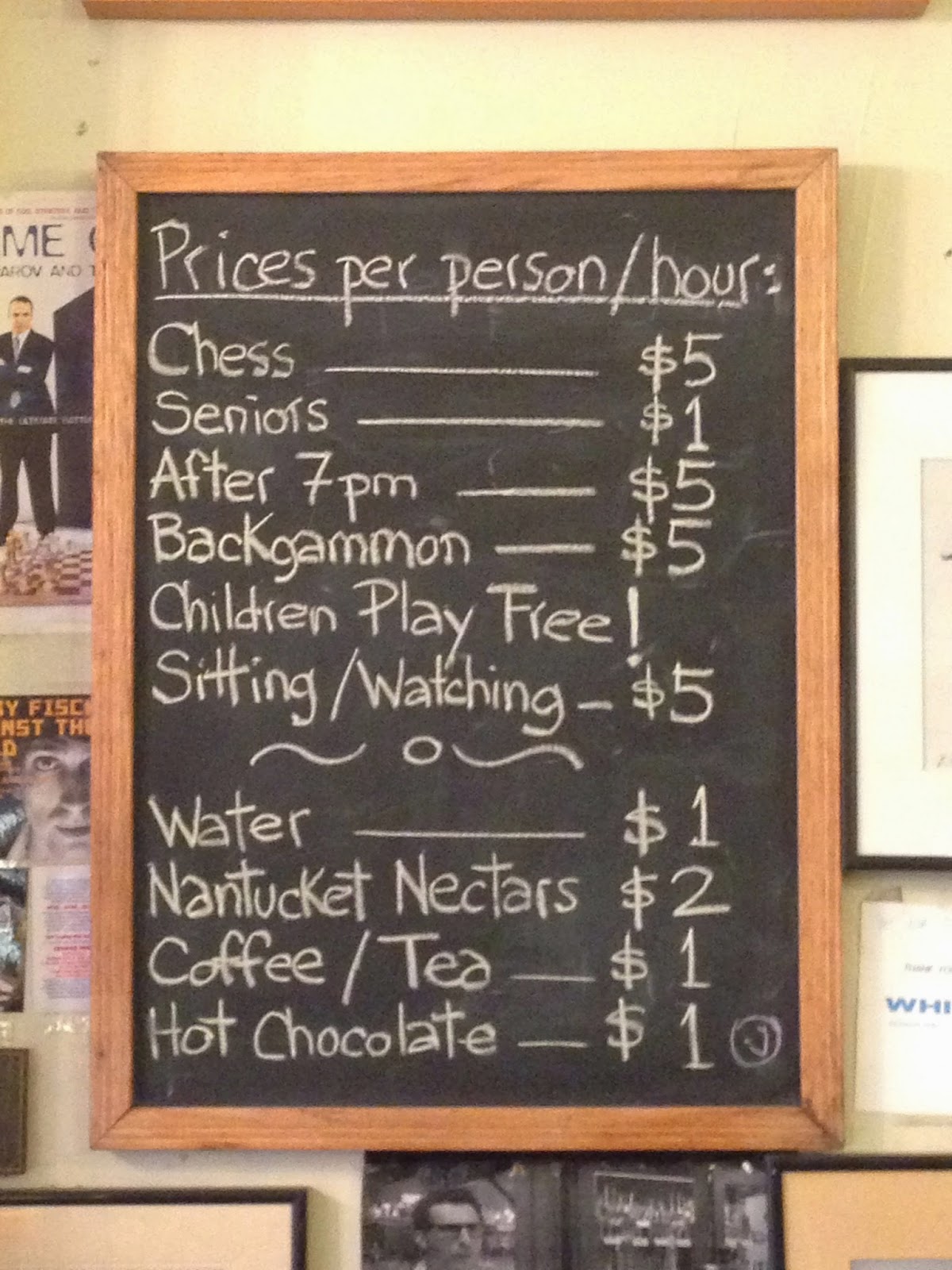 They played for about 45 minutes, concentrating hard and oblivious to the stares they got from a few of the patrons.


Holden got it into his head that he and Kevin were going to leave the apartment early on Sunday morning without the girls and go play baseball.  He was so excited that he came into our bedroom at 5am fully dressed.  Poor Kevin tried hard to get Holden to go back to sleep, but the two of them eventually left before 7 o'clock.  Which was fine with me because then Ella and I got to do what Kevin never lets us do: sleep in for me and watch cartoons for Ella.  After a leisurely shower and taking my time getting ready (something I never get to do with the boys around), Ella and I headed over to Starbucks for a late coffee and breakfast.  Then we hopped a subway down to Macys at Herald Square to see their big annual flower show. 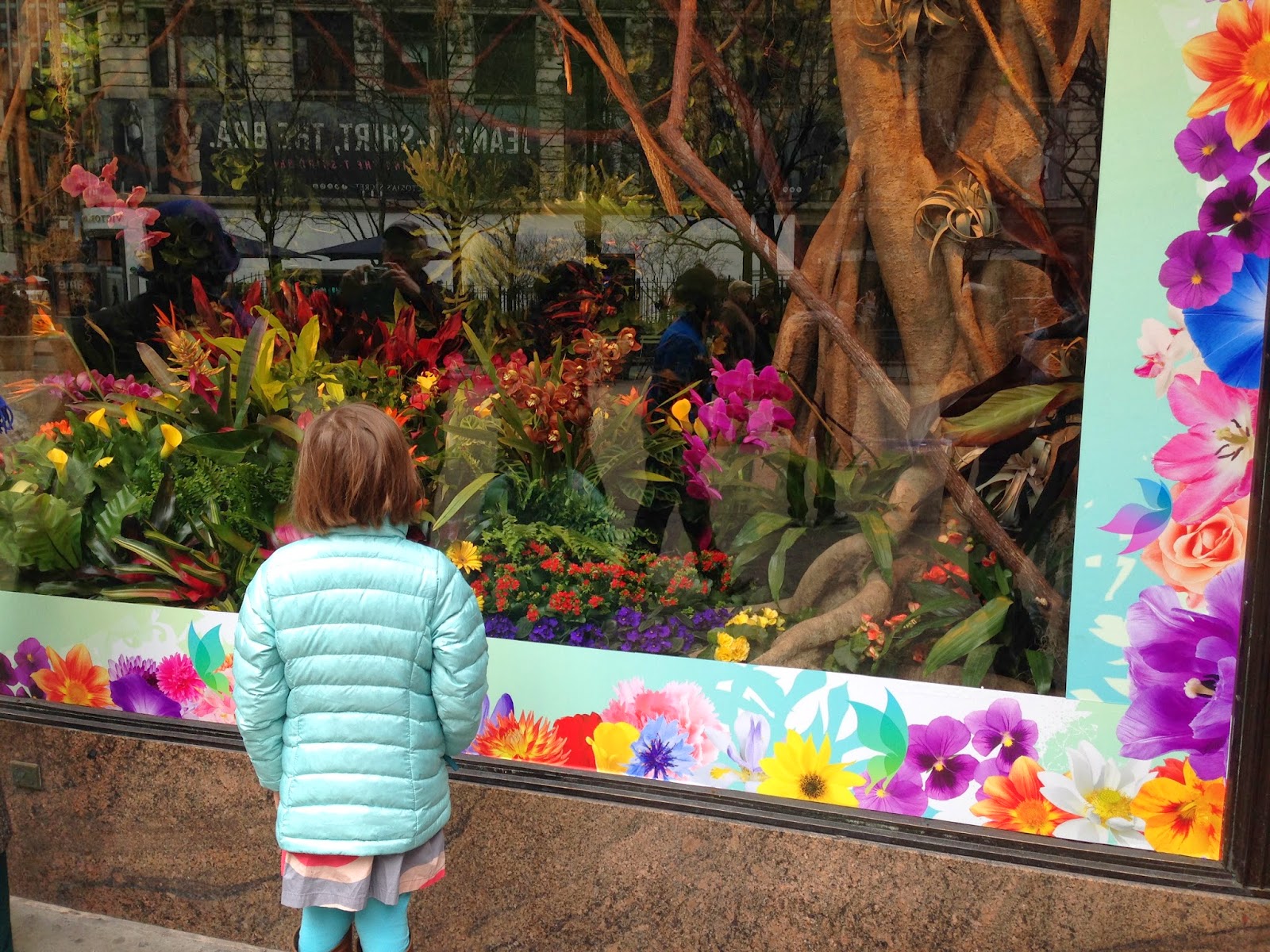 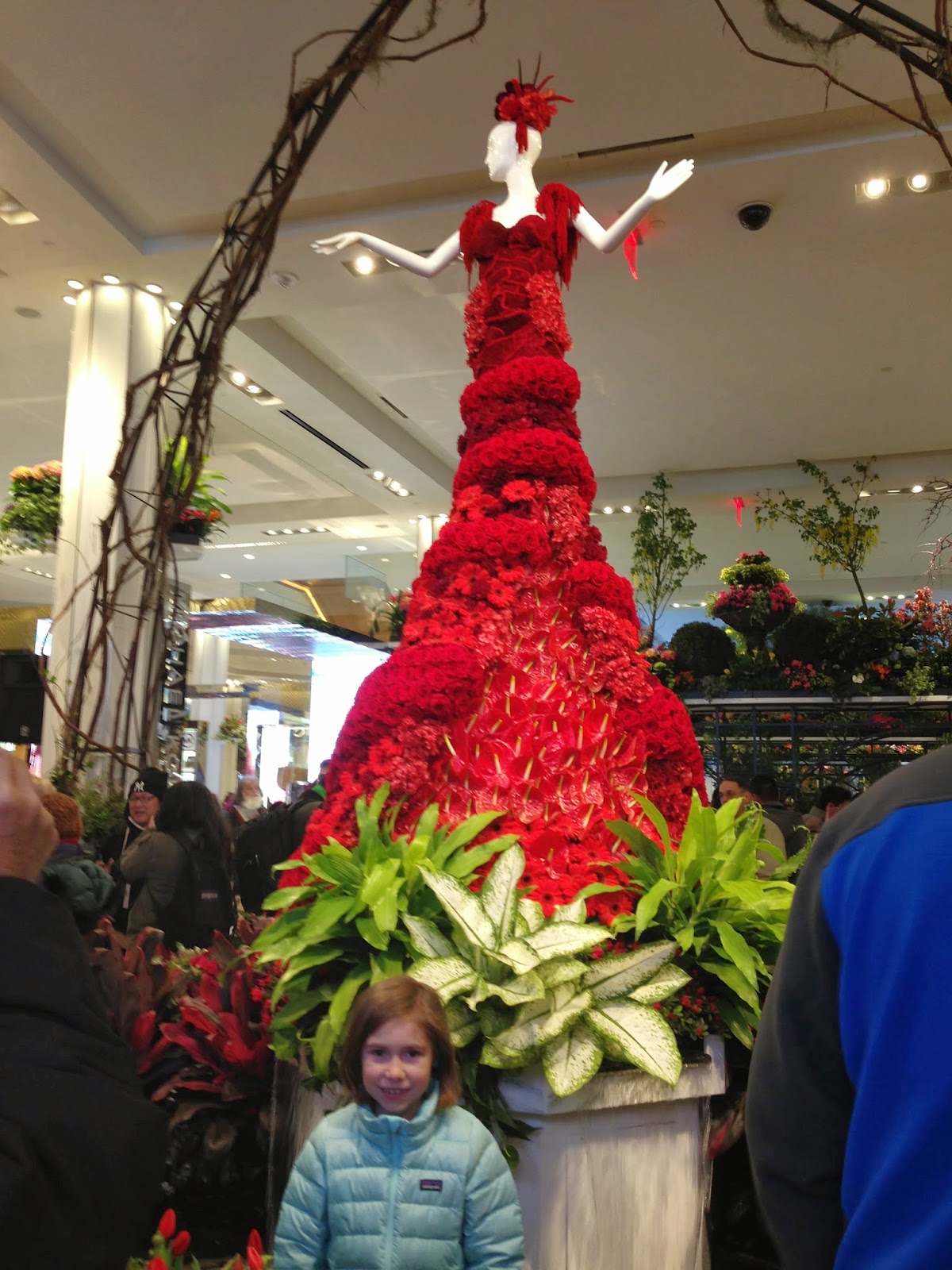 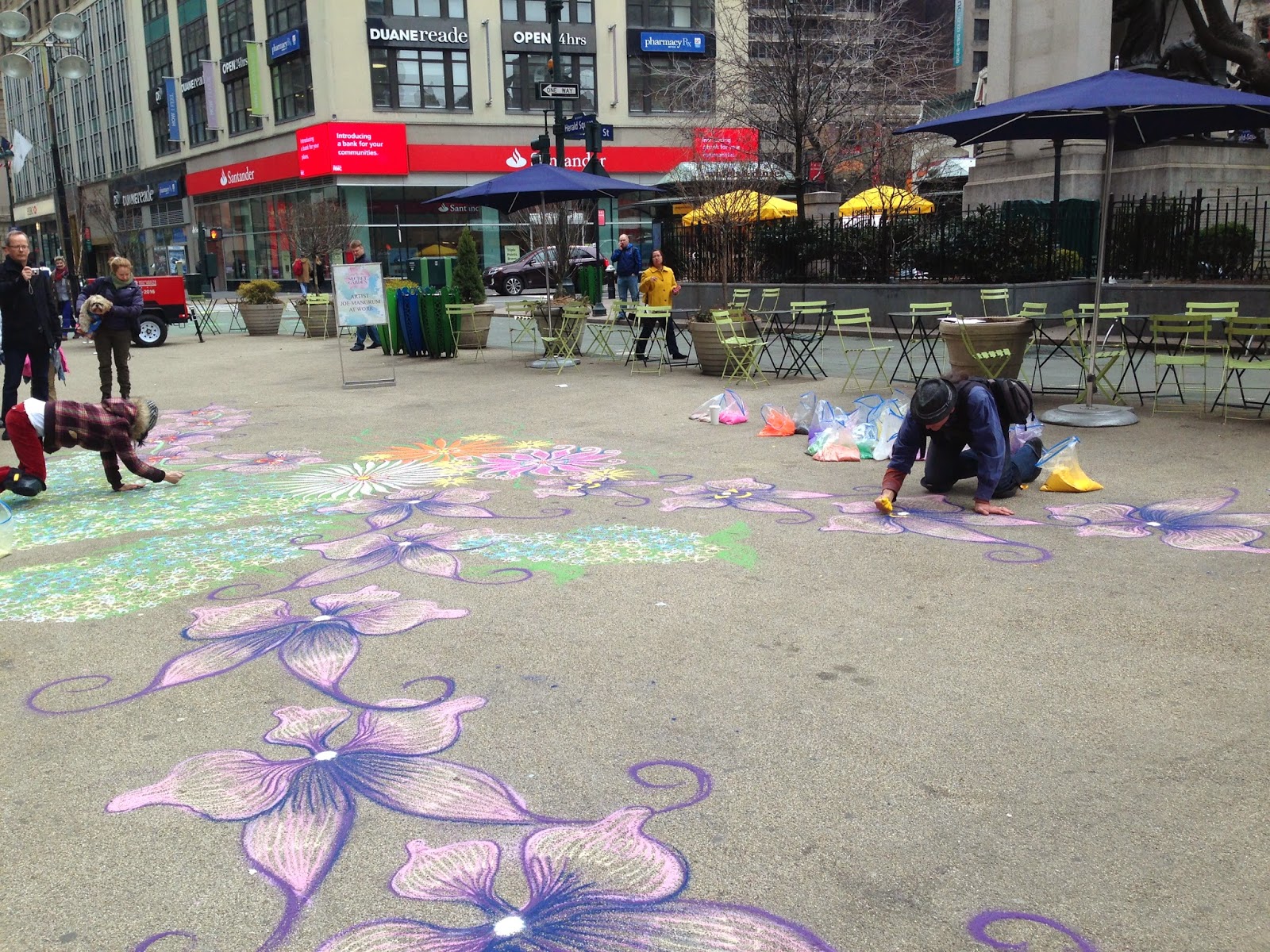 I think Holden's grand plans of spending the day with his dad was really a ploy to get Dad to buy him a new baseball bat. 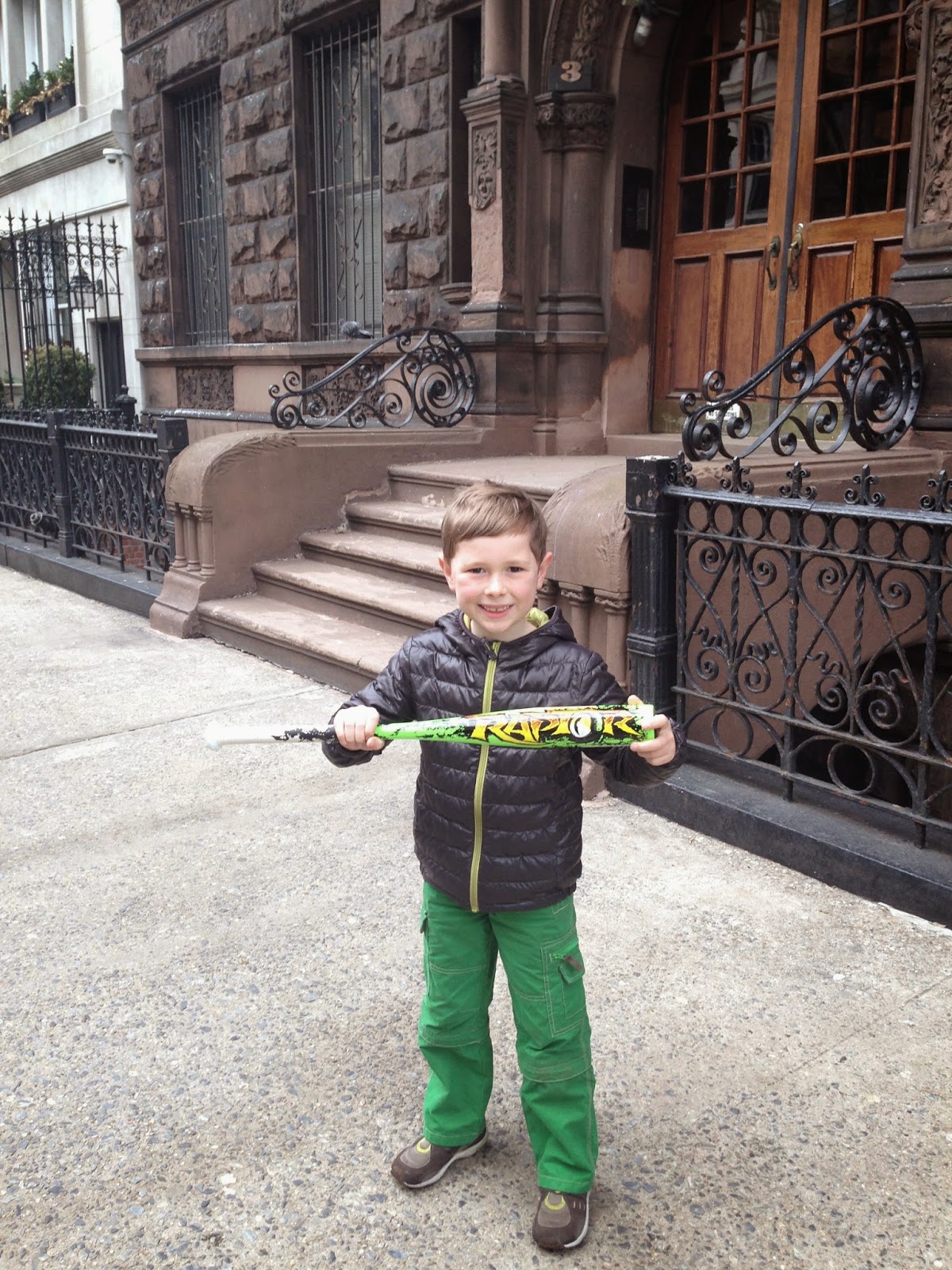 How do you say no to that?

Our family reunited that afternoon at a theater called Urban Stages.  We surprised the kids with an afternoon play about a girl named Ella Lucy who loves science and just wants to conduct experiments all day but feels weird because all of her friends are wearing pink and playing with American Girl dolls. 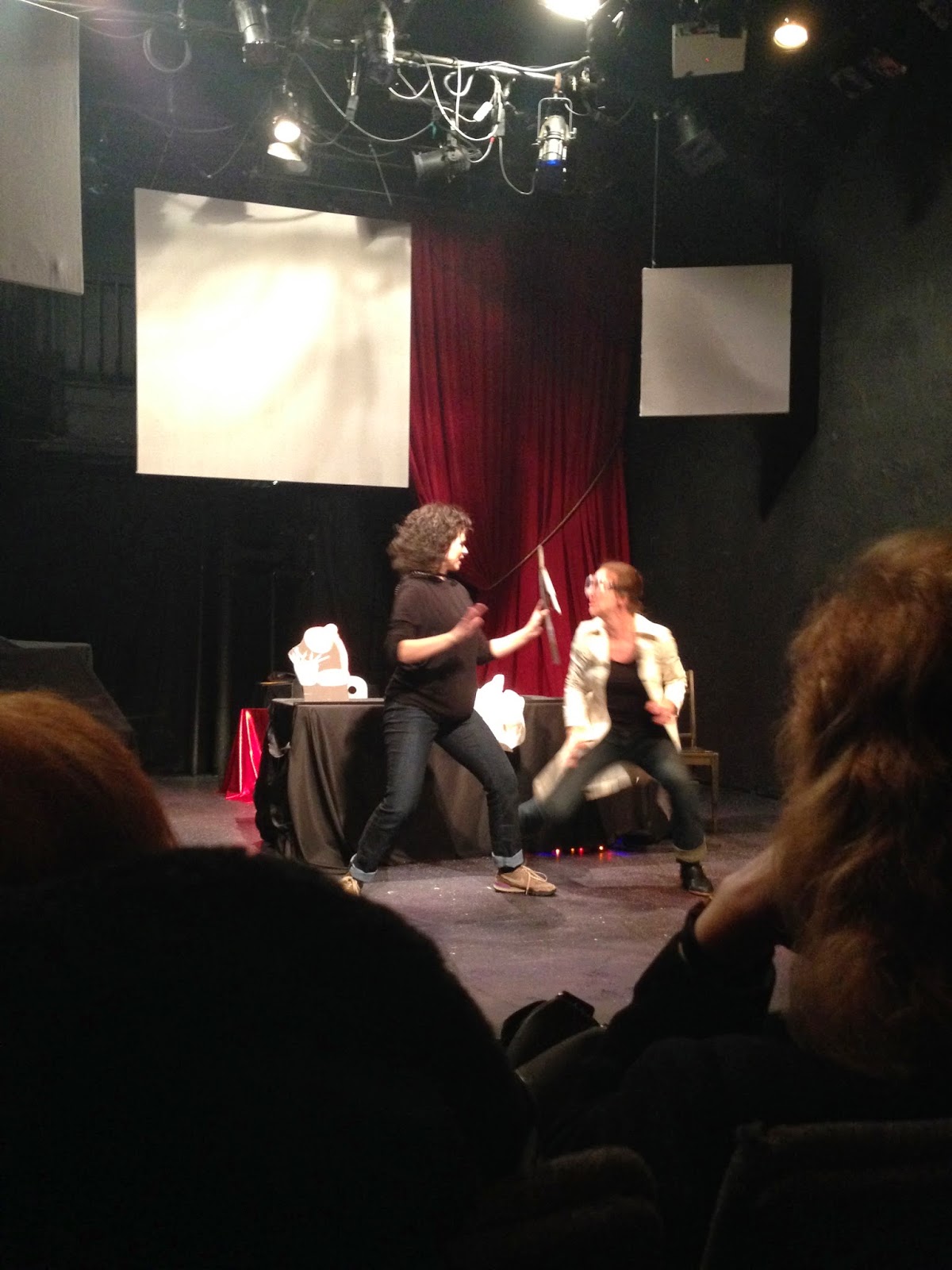 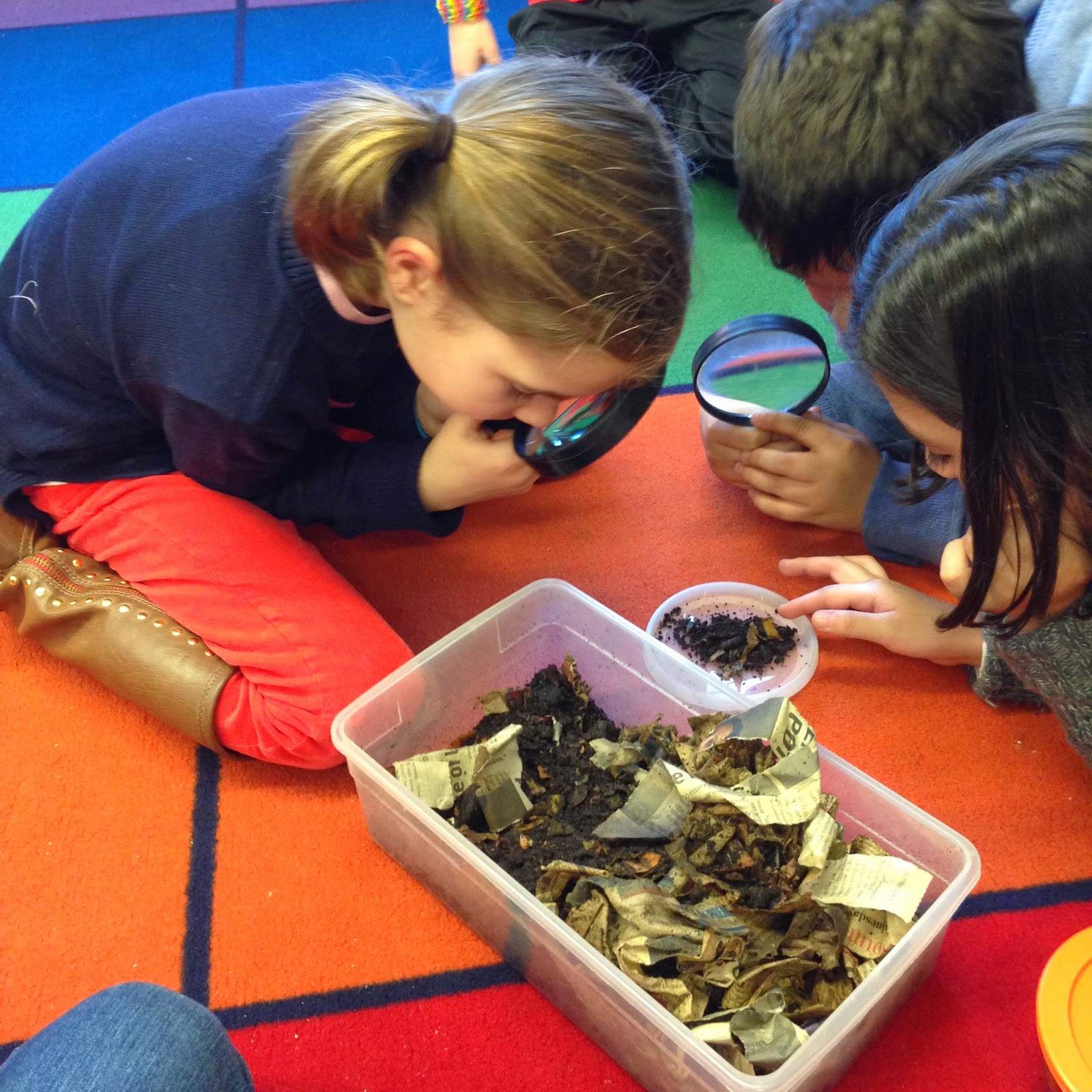