Well, it's official.  I have hit the mid-winter blues.  I think we all have. 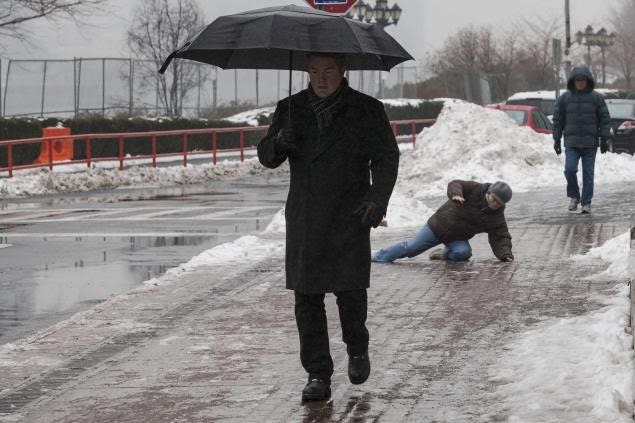 (Not my picture, but a good representation of what it looks like today.)

The beautiful snow of two days ago has now turned into a rainy, slushy, grey mess.  The kids were soaked by the time I finally got them to school.  We had to walk sometimes ankle deep in dirty gutter water just to get across the street all the while dodging taxis and trucks that were having trouble stopping.

I saw that a pedestrian was killed in San Francisco yesterday by a motorist.  It made the local news.  We had three pedestrian fatalities within two blocks of our school in January alone.

Welcome to our new normal.

For the last couple months the kids have had no recess, no outdoor play time.  Instead, their one and only break during their 6.5 hour school day is spent in the auditorium watching a movie (although Ella says you can't actually watch it because the kids are all so loud you can't hear anything).  When parents, including myself, ask the administration why the kids can't run free in the gym instead to get out some energy, we're told that the other gym classes need it.  What we're told by the teachers is that the lunch monitors just don't want to deal with rowdy children running around.  Instead, Ella says the monitors are playing on their cell phones while the kids are sitting in the auditorium.

And as soon as they enter the school the kids are yelled at by the security guards, barked at by the hall monitors, shouted at by their teachers.  I've seen Ella's spirit drop considerably over the last few months.  During the week she's become a sad, angry little girl.  Every morning Holden says he doesn't want to go to school.  When I ask him why not, he says I already know everything they're teaching me.  He's right, he does.

Dragging the kids to a school they hate is my new normal.

I have spent almost every day from dropping the kids off in the morning to picking them up in the afternoon inside our dark apartment this winter.  Sometimes I hang out at a local cafe when I don't have other chores I should be doing at home.  Sometimes I hang out there even when I do have other chores that need to be done, just so I'm not in a dark apartment all by myself.

My posts are always about our fun weekends.  But you should know that our Mondays through Fridays often suck.  I'm working on that.  I'm working on the school situation, looking at other schools, other options.  I'm working on getting my butt out of this apartment more, even when it's freezing cold outside.  I'm working on a new normal for our family so that we no longer have the highs of an amazing weekend followed by the lows of a crappy week.