The weekend is still in full force for us (MLK Day) but we've had such a full weekend so far and have a big day today planned, that I thought I should post an update now.

First, a quick update on last week since, as Grandma Diane pointed out on the phone last night, I didn't do a midweek post last week.

Ella's Garden Club had a visitor from the Lower East Side Ecology Center come and teach them about worm composting.  I was happy to not have to go outside to the garden in the bitter cold again. 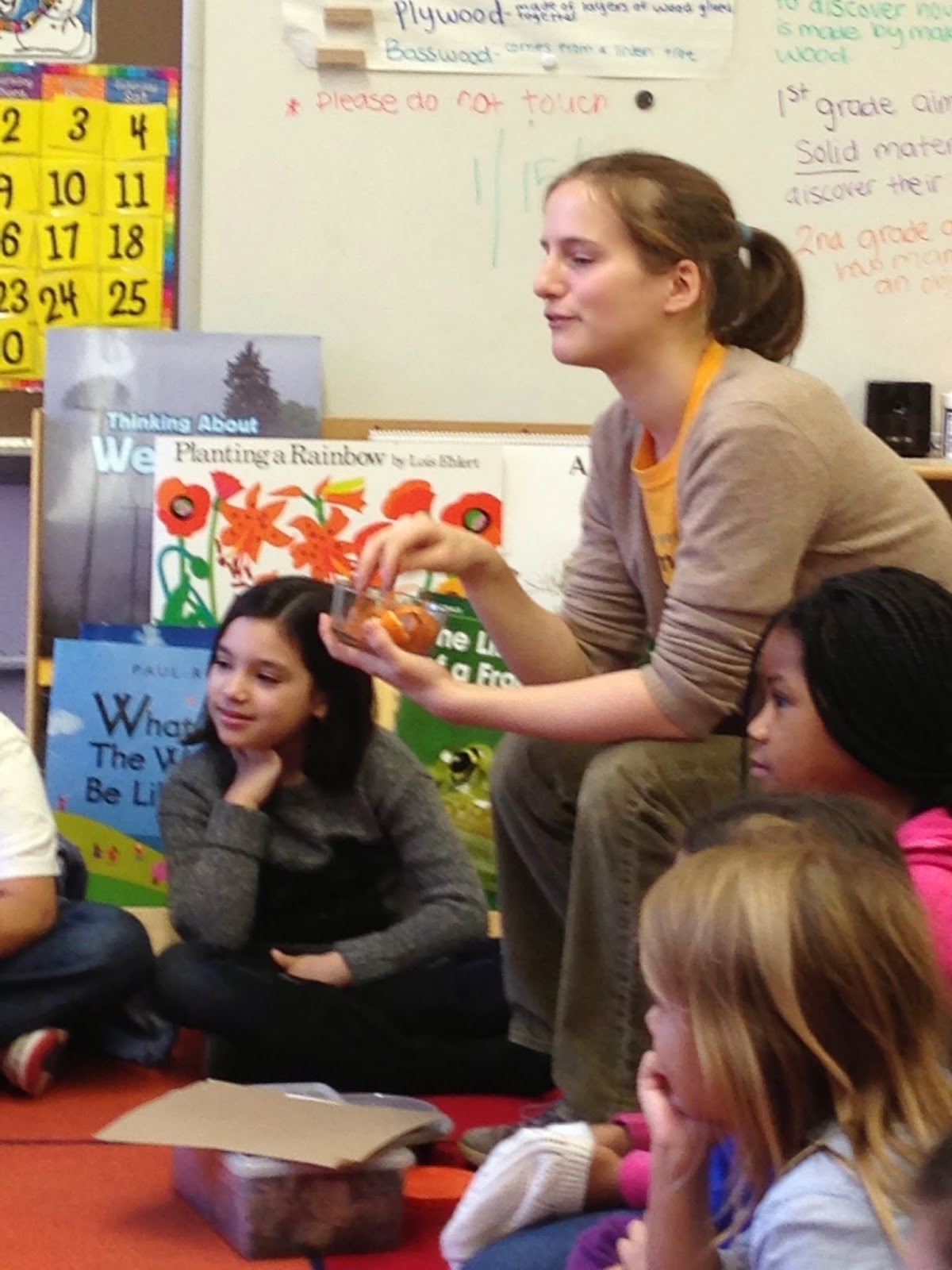 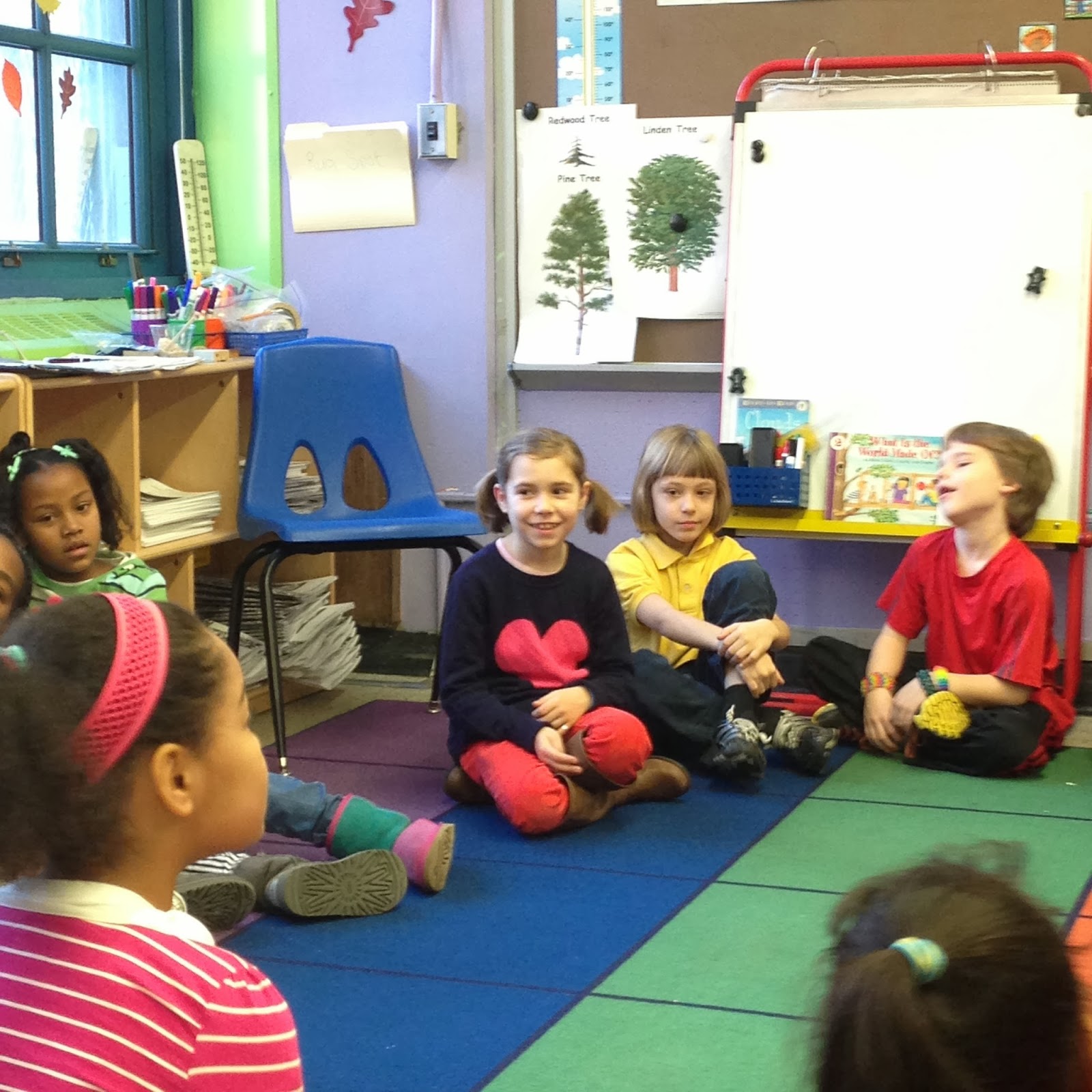 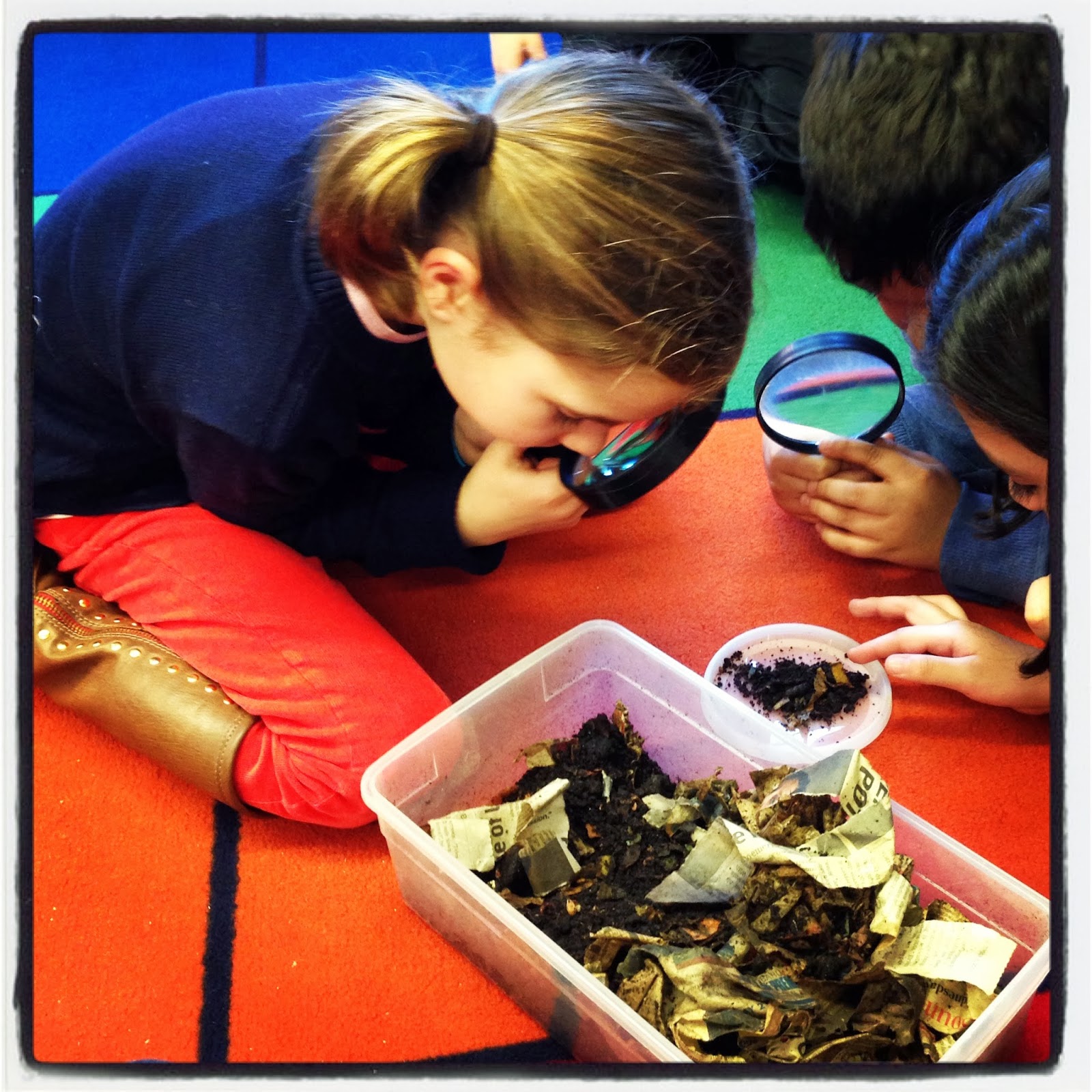 Ella has also taken over Kevin's job of reading a poem to us before starting dinner (our version of grace) with a new book she got for Christmas. 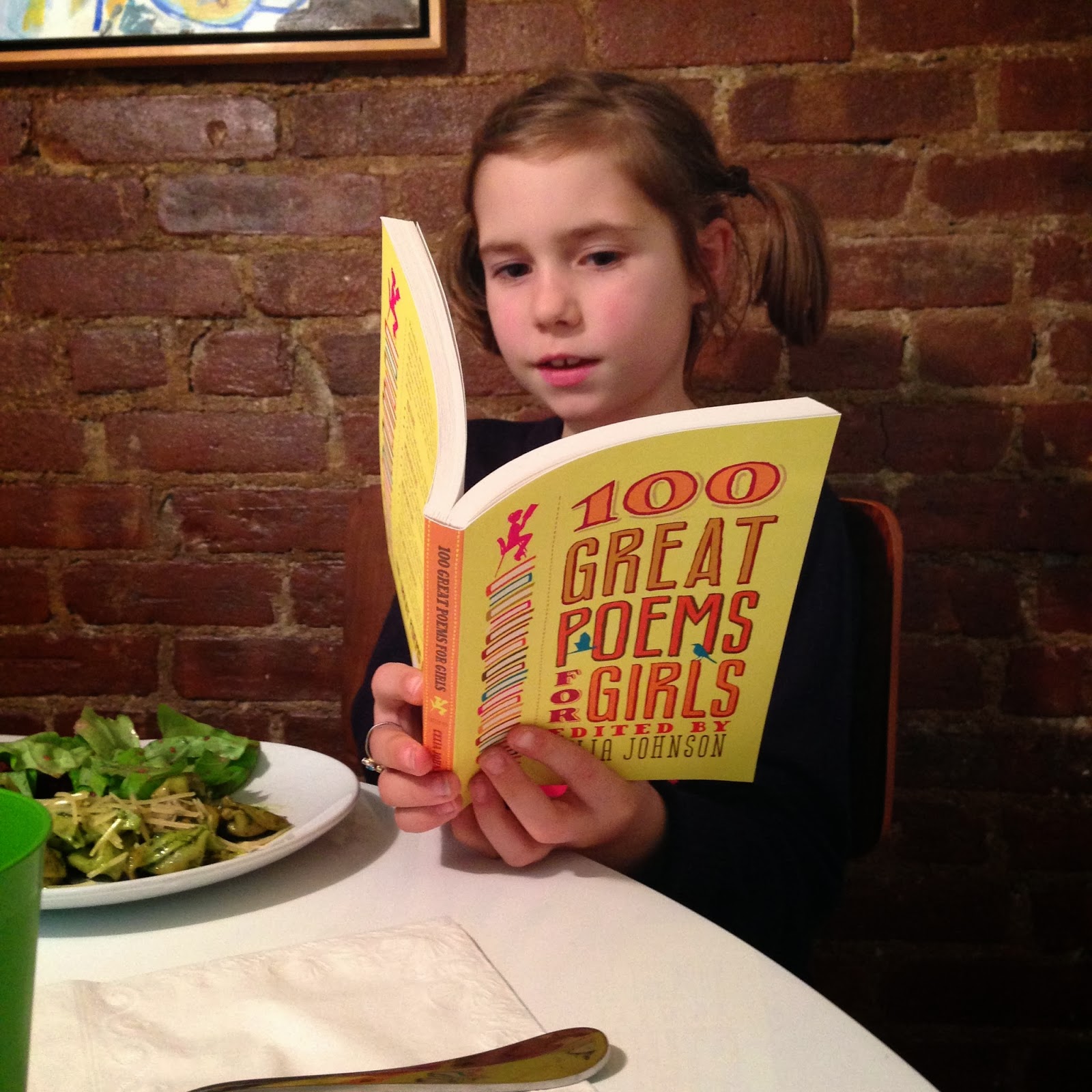 And believe it or not, this dish was a hit (and by hit, I mean the kids both said they loved it but only ate 3 bites, because they are actually birds and can survive on almost no food). 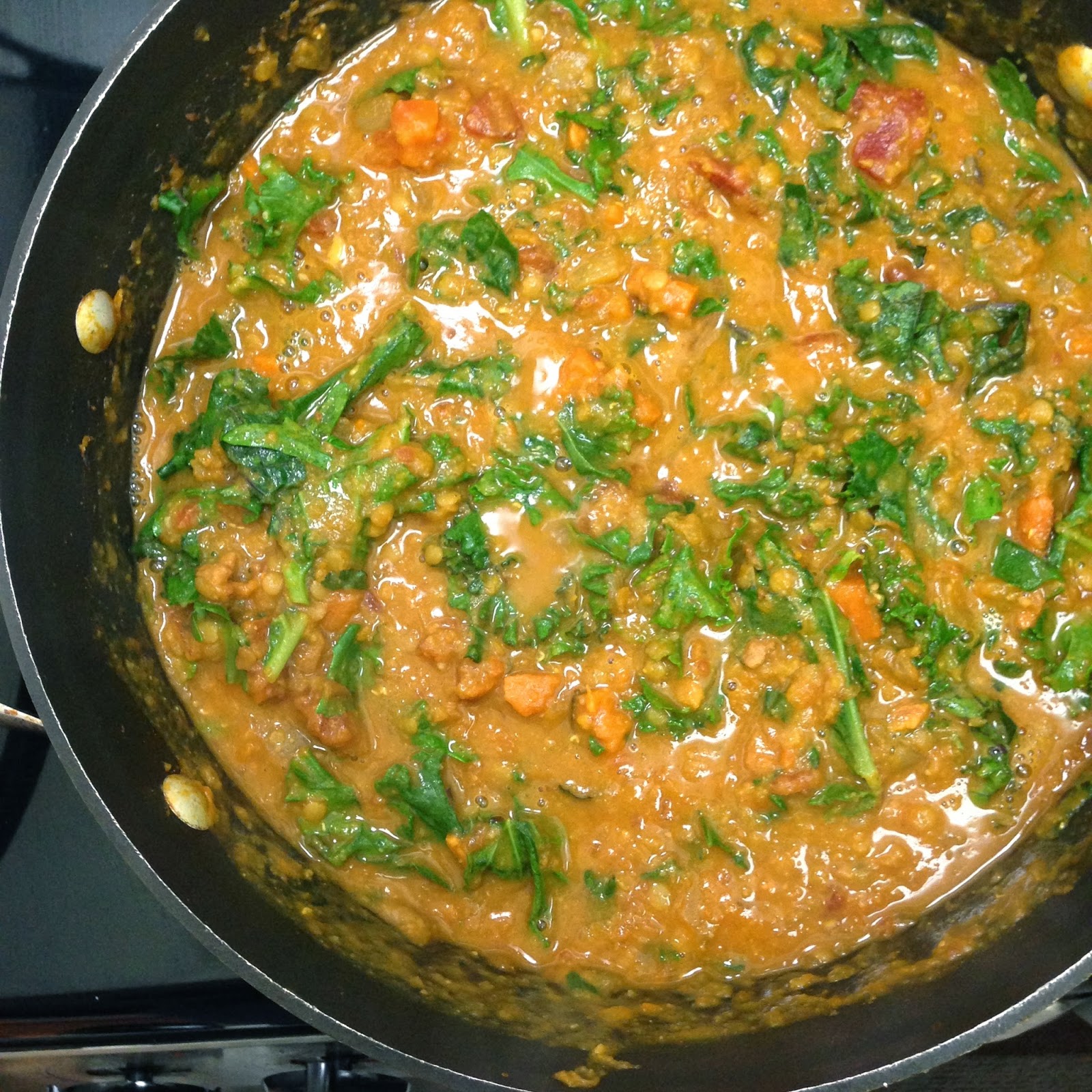 Yam and Peanut Stew with Kale

Friday night Kevin went out with a childhood friend from home who was in town so I got to have a sushi/ramen date with my kids all by myself. 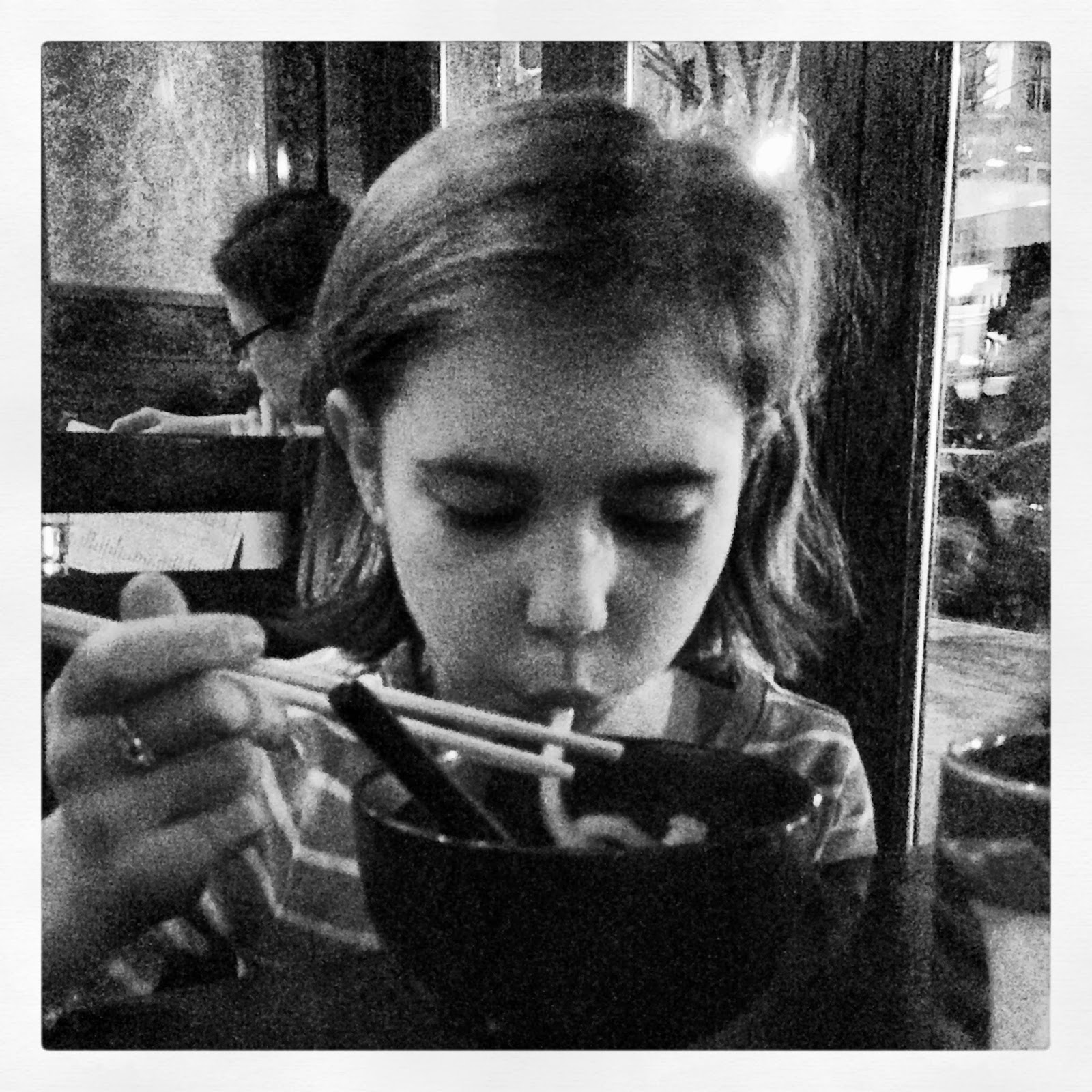 Saturday we had another one of those "Only in New York" moments.  An exhibit at the New York Historical Society was recommended to us - The Armory Show at 100, a look back at a very famous exhibit 100 years ago of famous artists such as Duchamp, Matisse, Picasso, Van Gogh, Cezanne and Gauguin.  It was important because it was the exhibit that introduced Americans to European avant-garde painting and sculpture.  Anyway, we decided given our new membership we would go check it out.  Well, not only were they giving a special tour for kids of the exhibit, it was entirely in Spanish!  Only in New York could we find such a specific tour, completely relevant to us.  Kevin and I had to ask the kids for translation every once in a while. 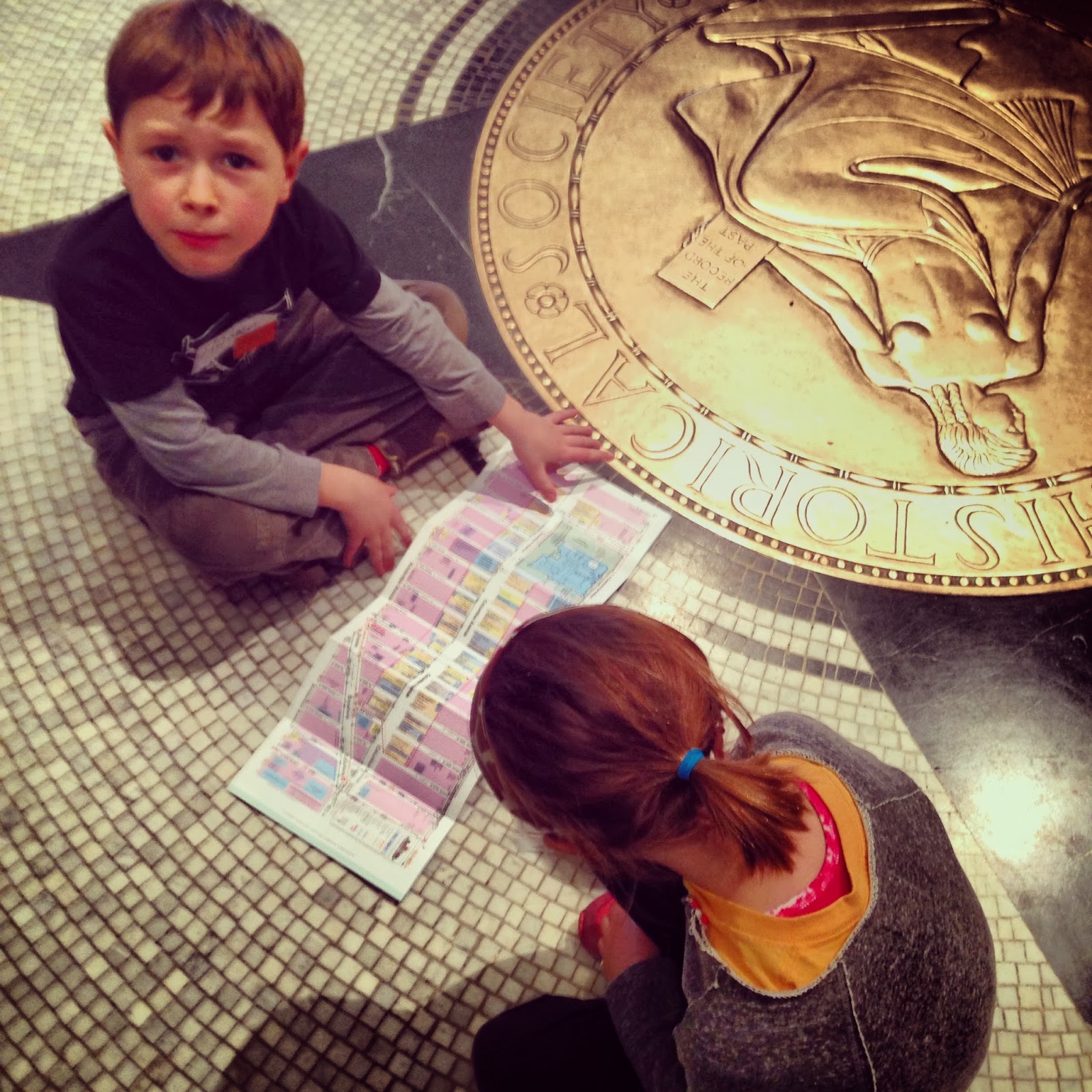 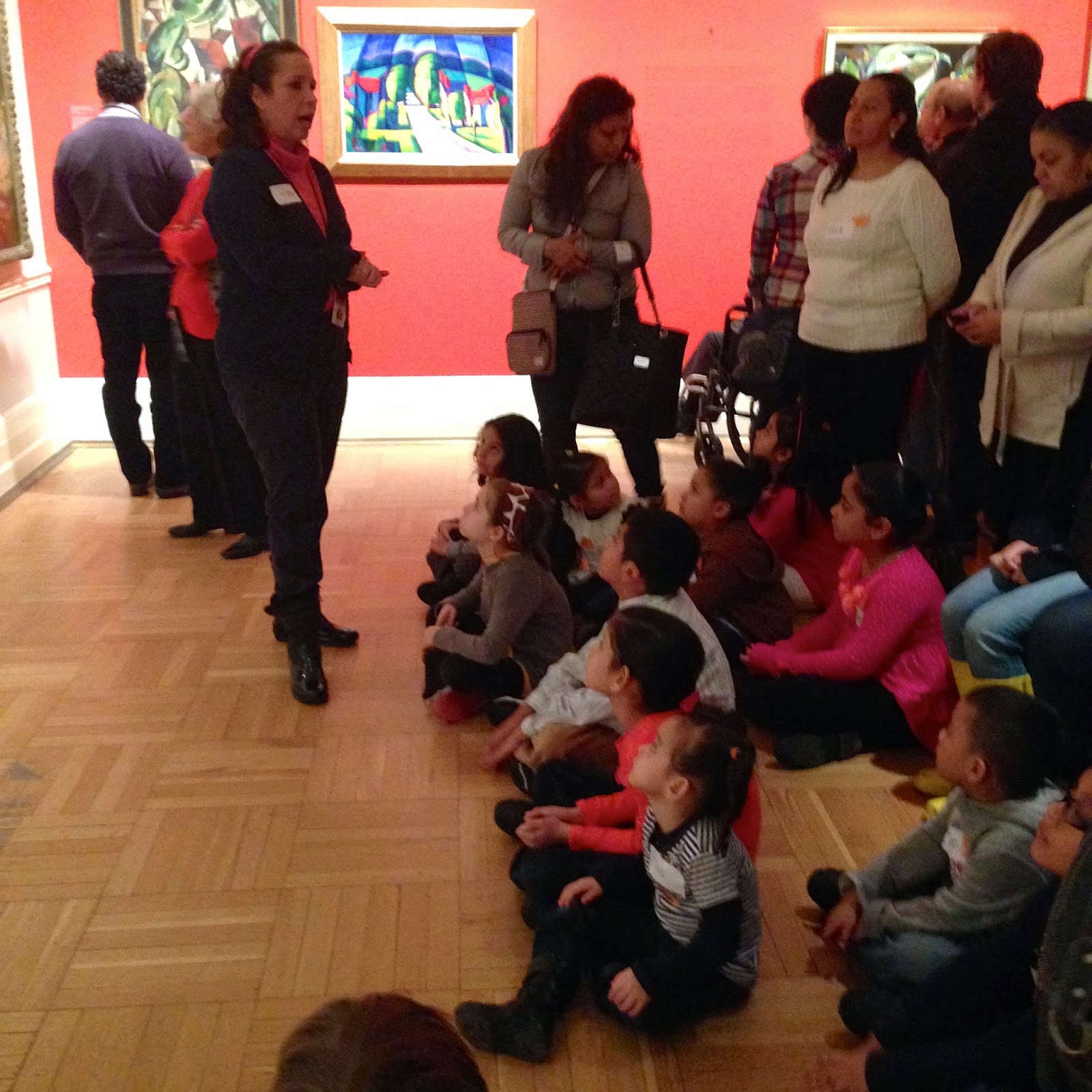 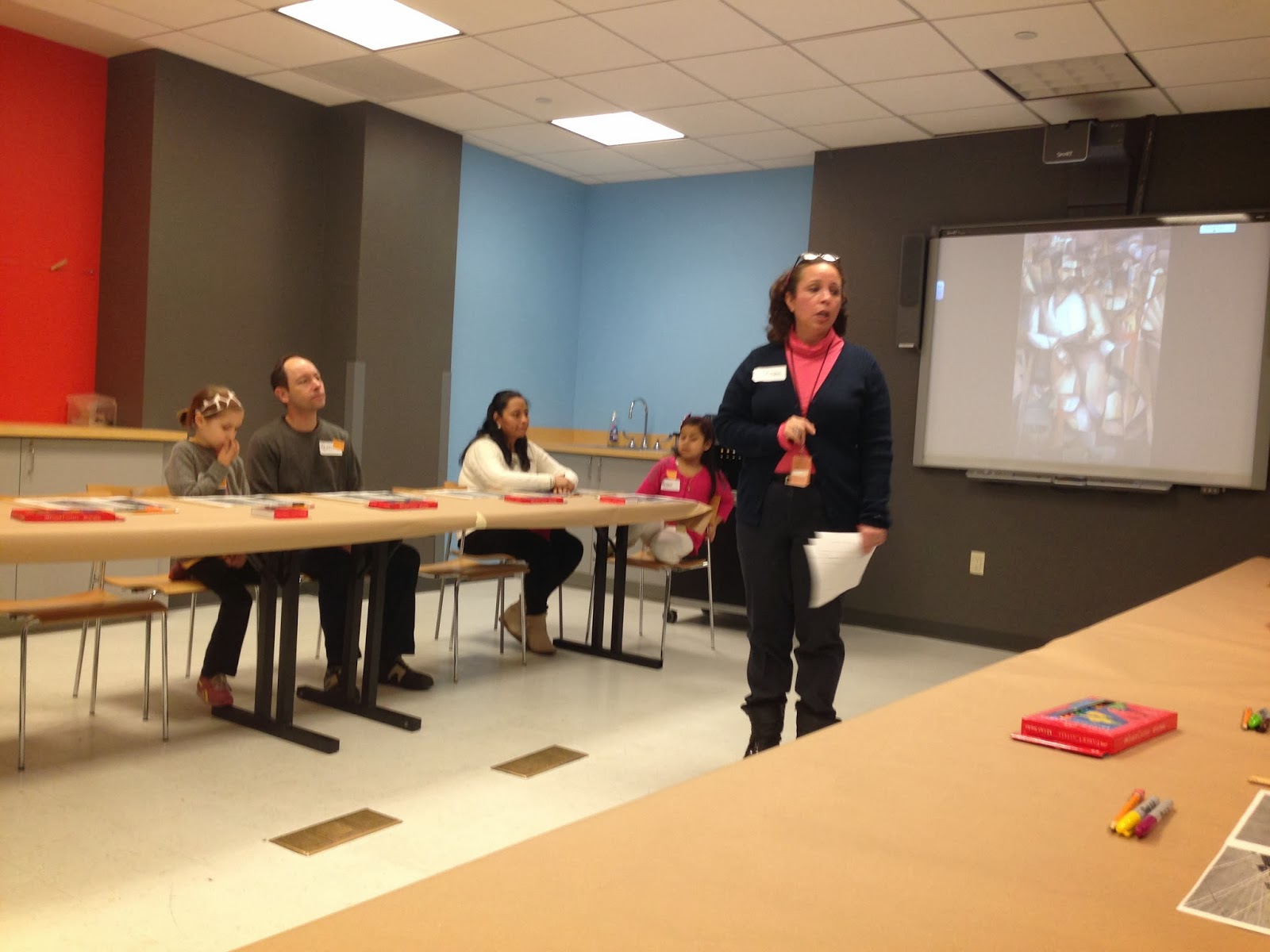 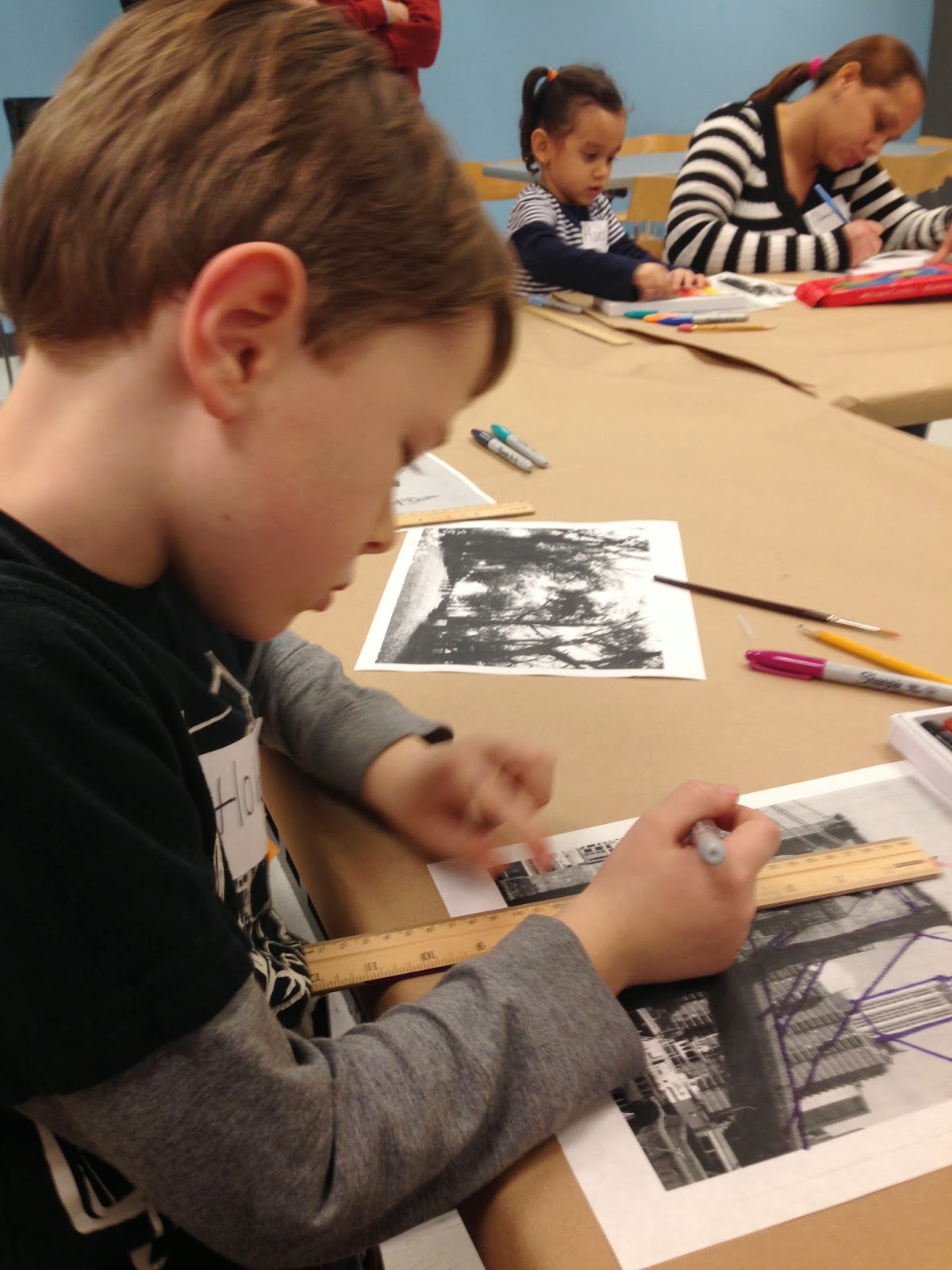 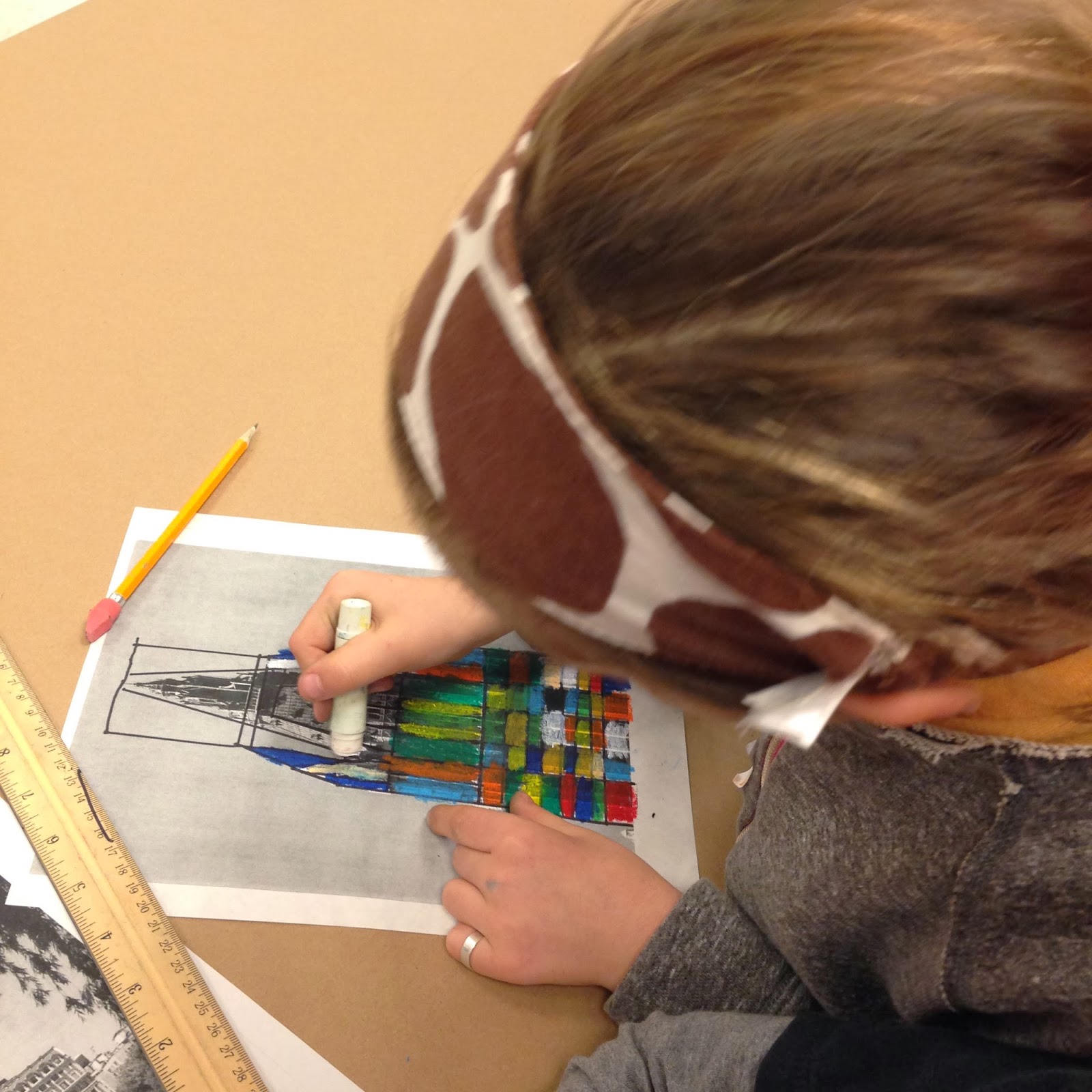 We all even had a chance to do some hands-on "cubism" after the tour.

Kevin's cousin Greg and his family are in town this weekend.  They are an incredibly talented family.  His wife Wynne and both of his daughters are musicians.  Both daughters have gone to (one is still attending) the School of the Arts in San Francisco.  His oldest daughter Grace is now studying at the oldest art school in the country, in Philadelphia.  They are here this weekend because their youngest daughter Ava is singing at Carnegie Hall on Monday night!  Grace and her mom Wynne have also performed in an orchestra at Carnegie ten years ago or so.  So we were lucky enough to get to catch up with them on Saturday night over dinner.  We'll see them again tonight for the concert. 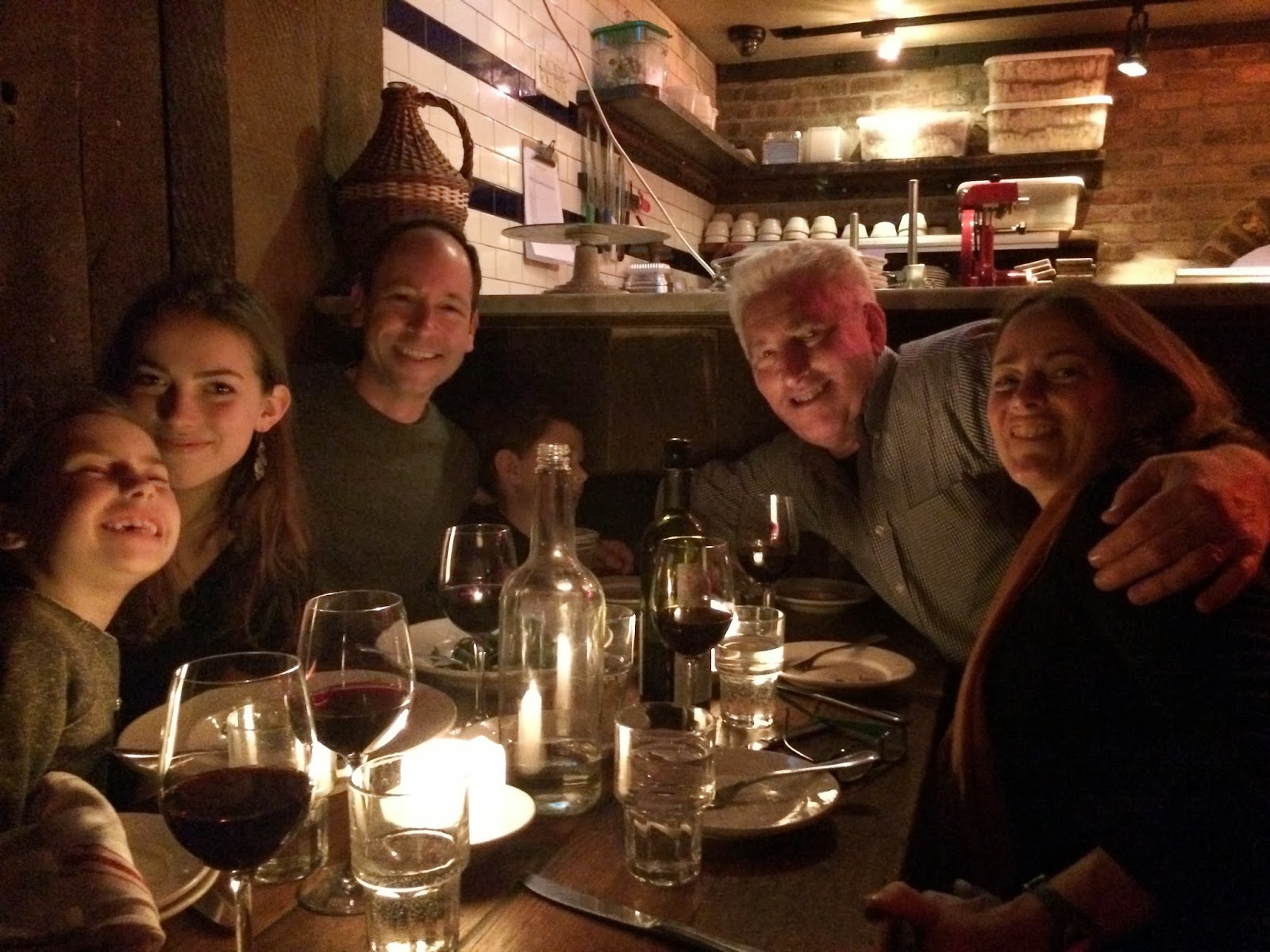 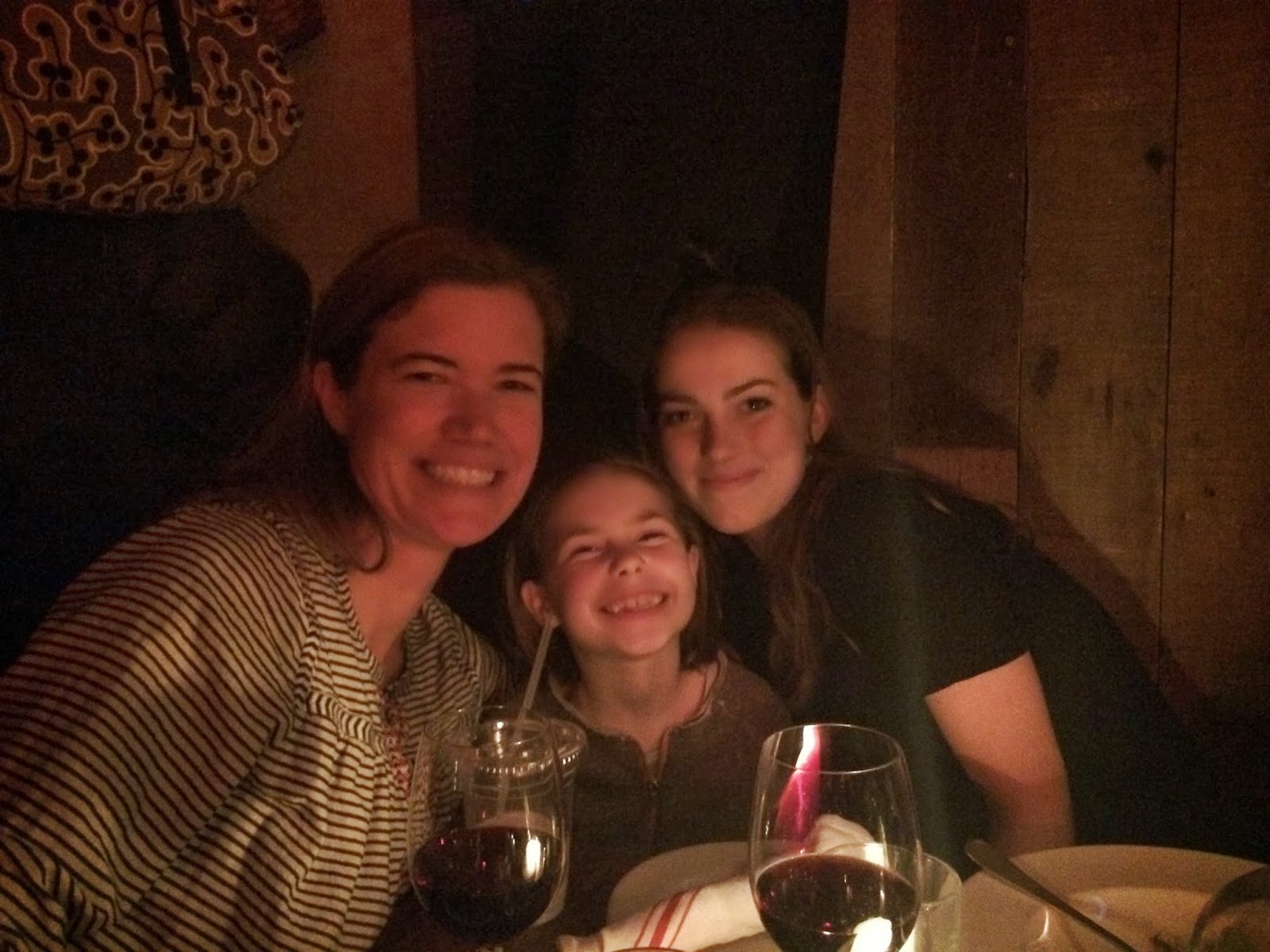 On Sunday, although Kevin really wanted to try to get in on a tour at The Met, I thought we should give the kids a free day to just have no plans.  While they love doing the tours and I'm sure would not have complained if we said we were heading across the park to The Met, they also really need downtime, of which they get almost none.  They put it to good use.  Ella and Kevin have started writing a story together, taking turns on the laptop writing paragraphs.  And Holden has really taken to a new "toy" he got for Christmas, Snap Circuits. 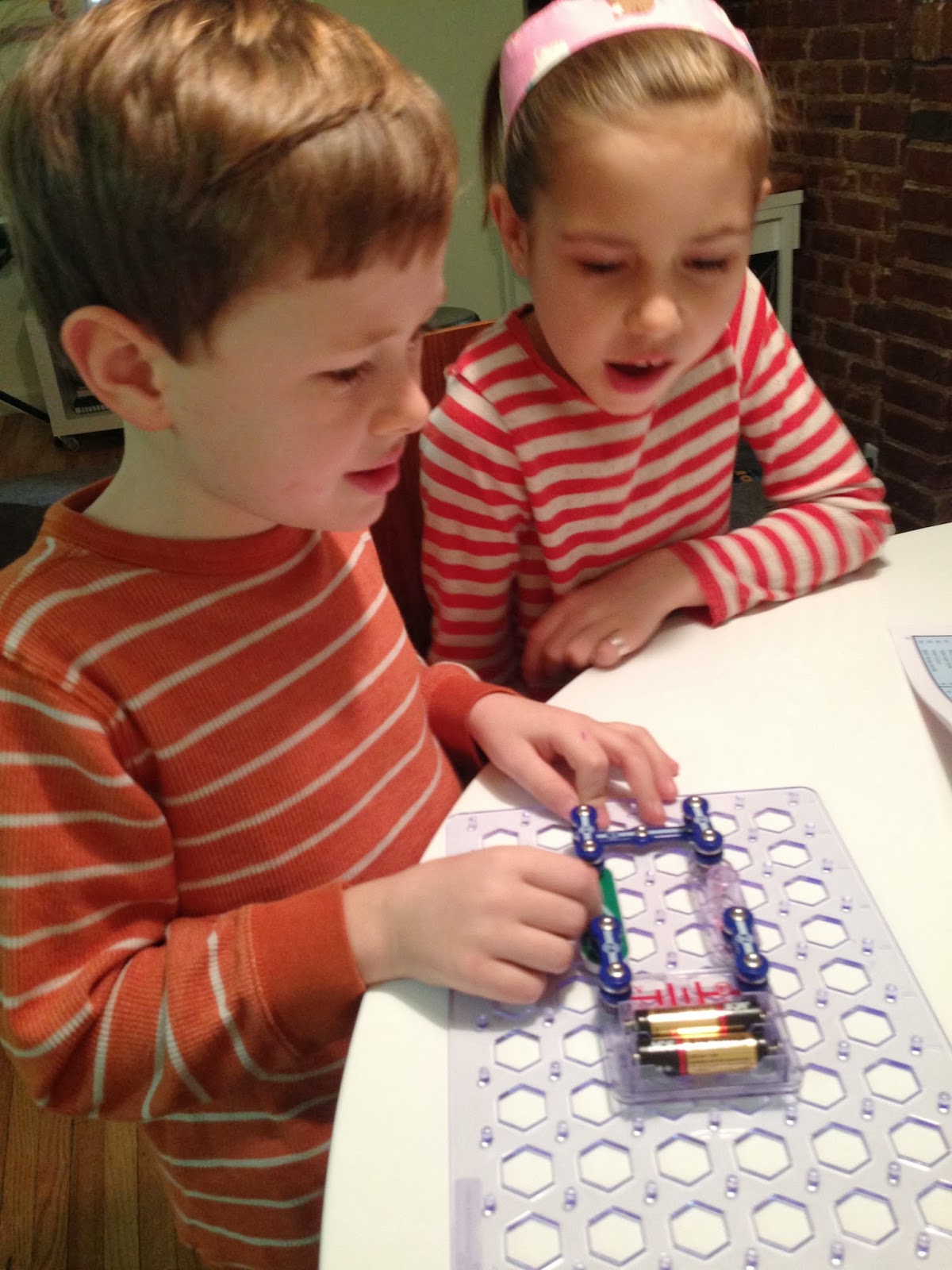 It opened a flood of memories when Holden pulled the circuit board out of the box.  I had completely forgotten that my dad had also bought me a very similar circuit board when I was a kid.  Thirty years ago it wasn't quite as fancy but it was the same idea - learning how to construct electrical circuits to turn on a light, or ring a door bell, or start a fan spinning.  Holden worked on it for hours and can now explain to anyone who asks, the difference between a resistor and a photoresistor.

Knowing that we'd be watching hours of football in the late afternoon with the 49ers in the playoffs, I decided we should get outside and get some fresh air for an hour or so.  We headed a block over to Central Park and Kevin lead us over to The Ramble, an area of the park that has a lake and hiking trails (it was originally intended as an area to escape from the carriages). 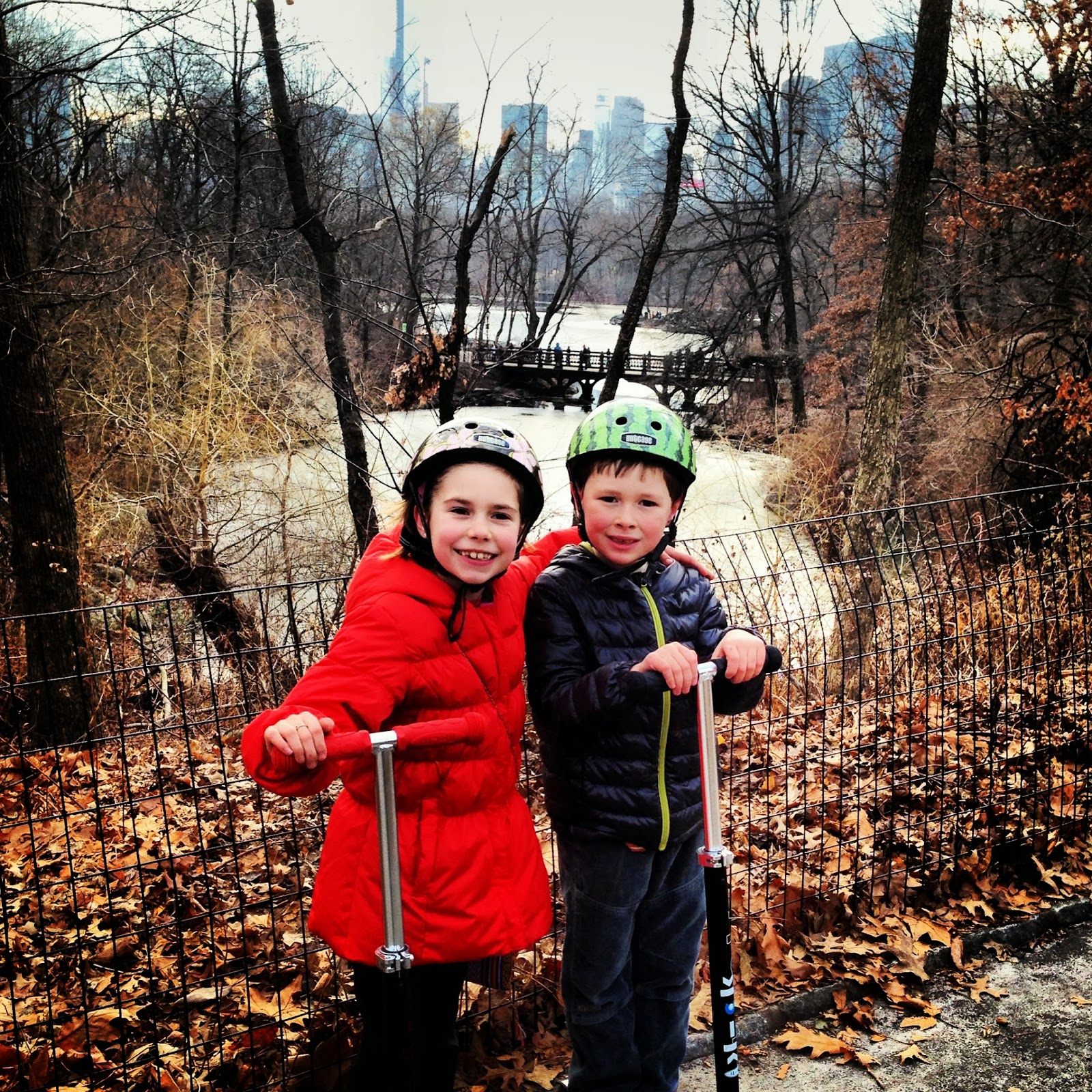 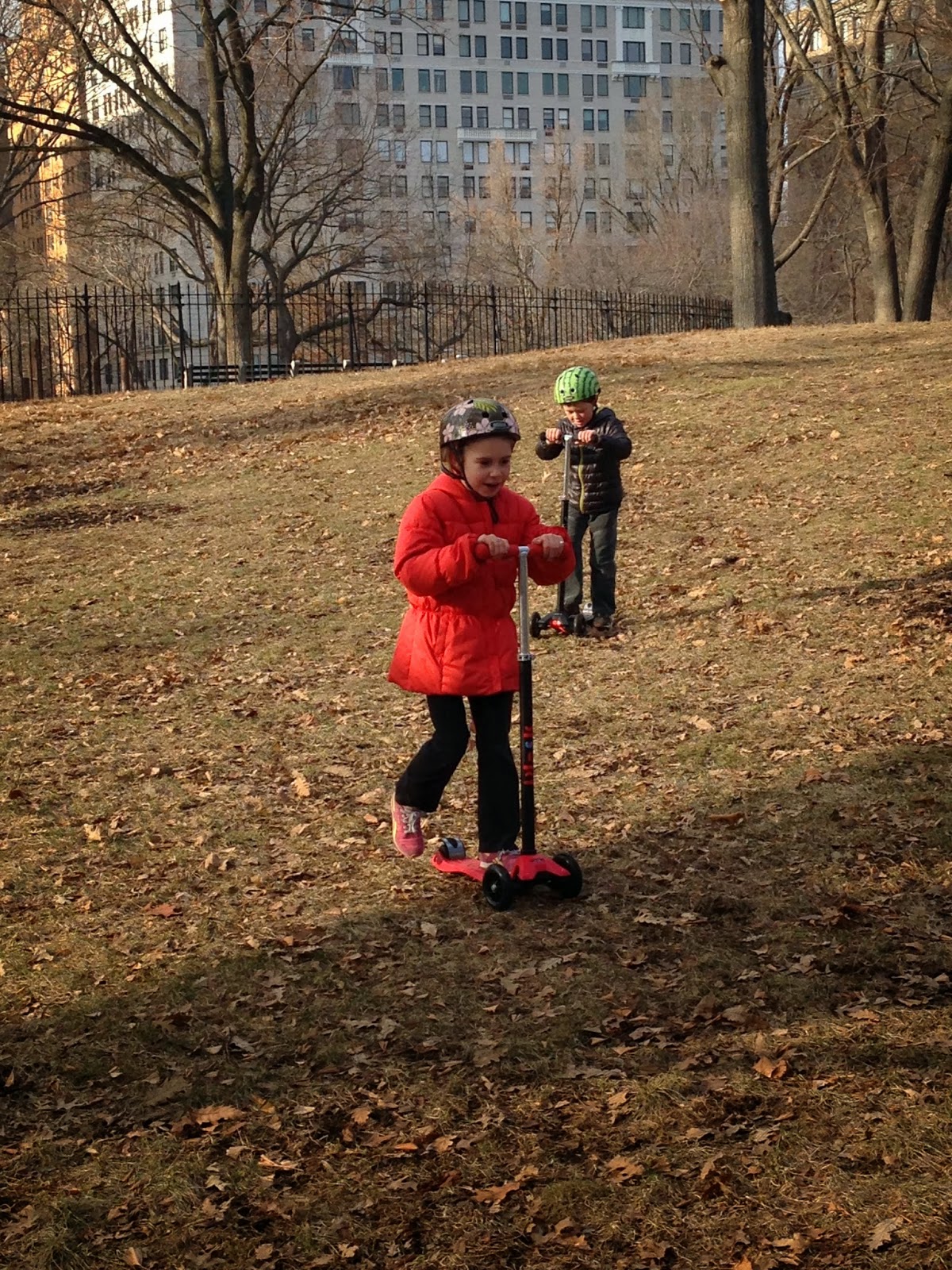 Trying to scooter down the same slopes they sledded down a couple weeks ago. 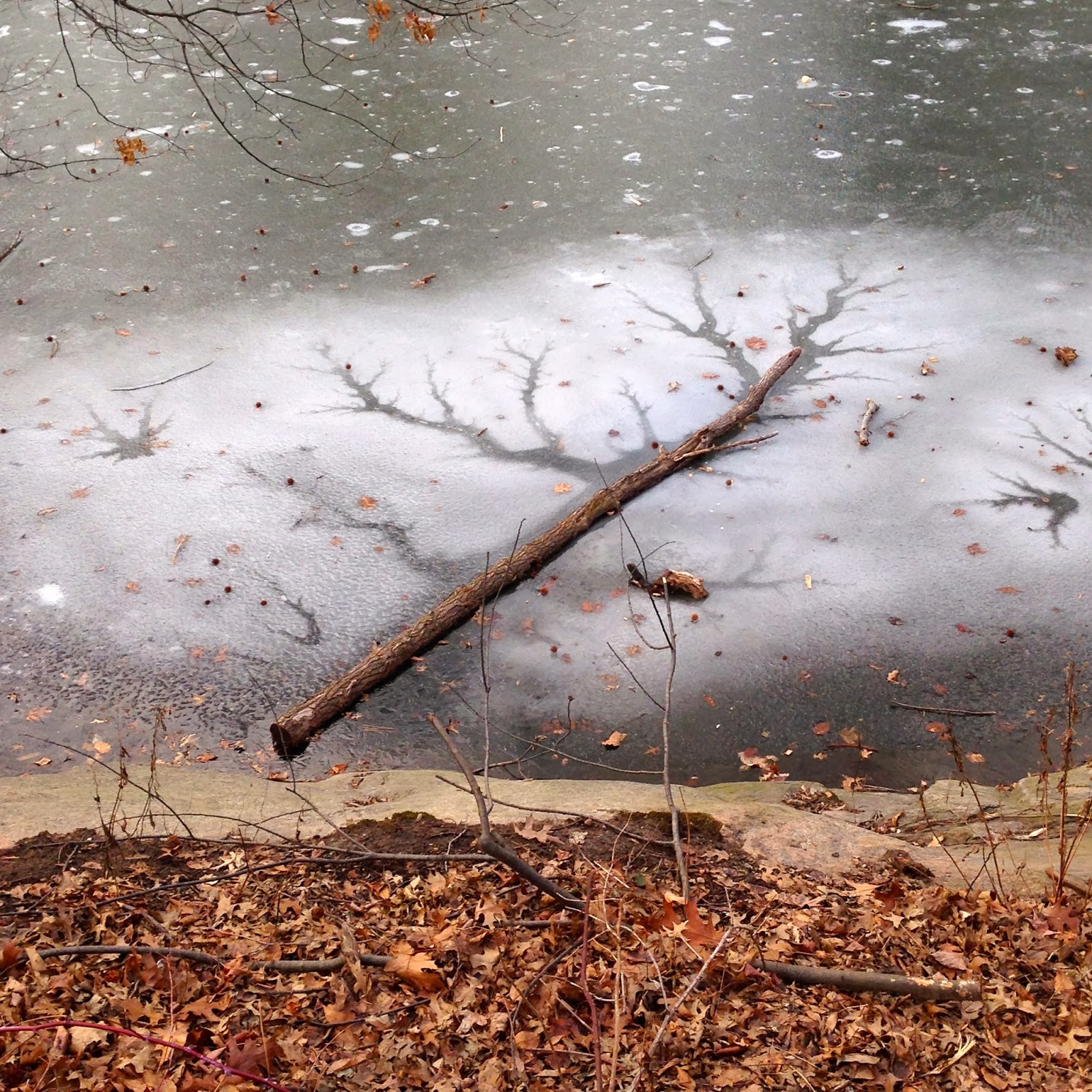 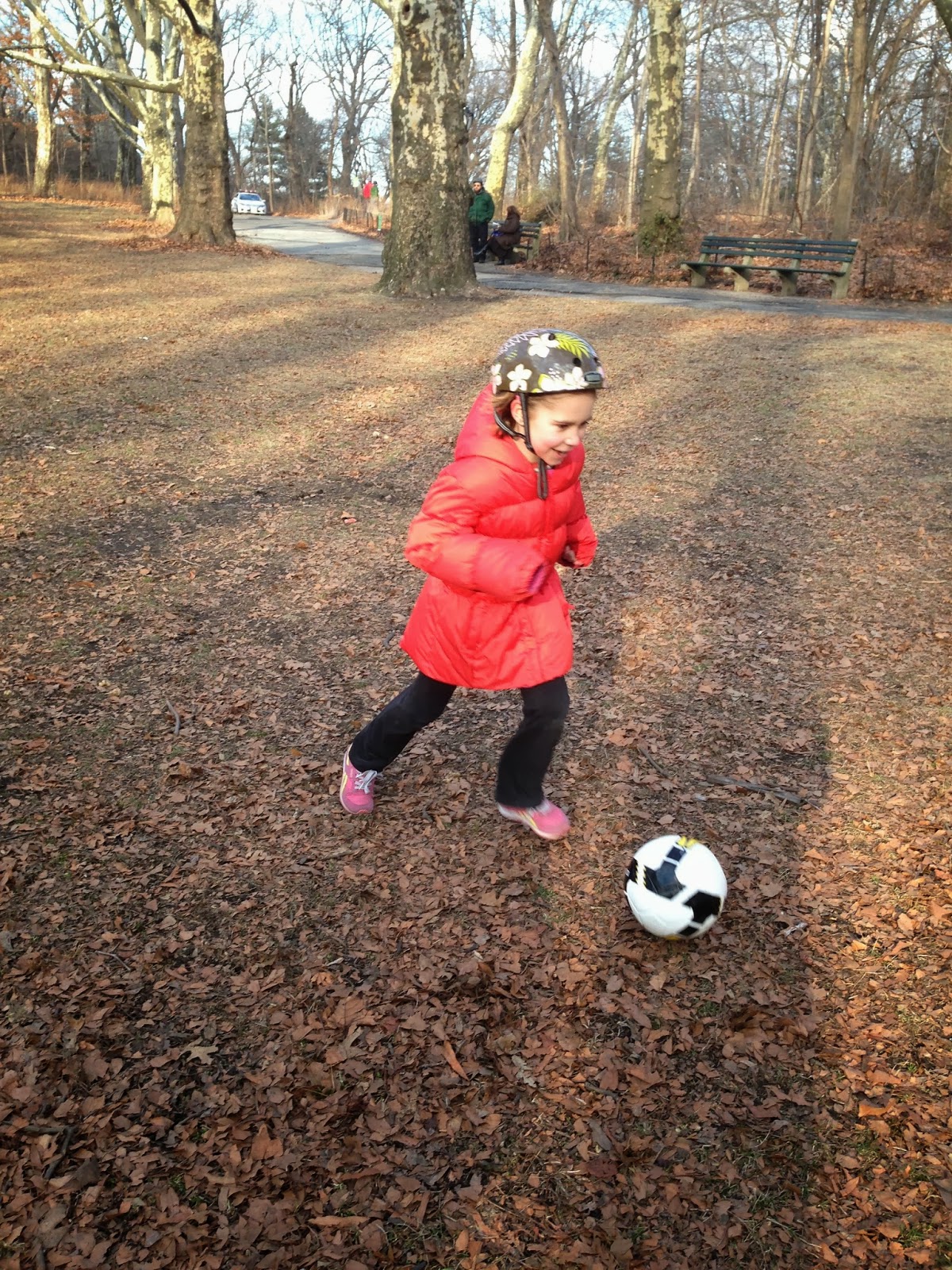 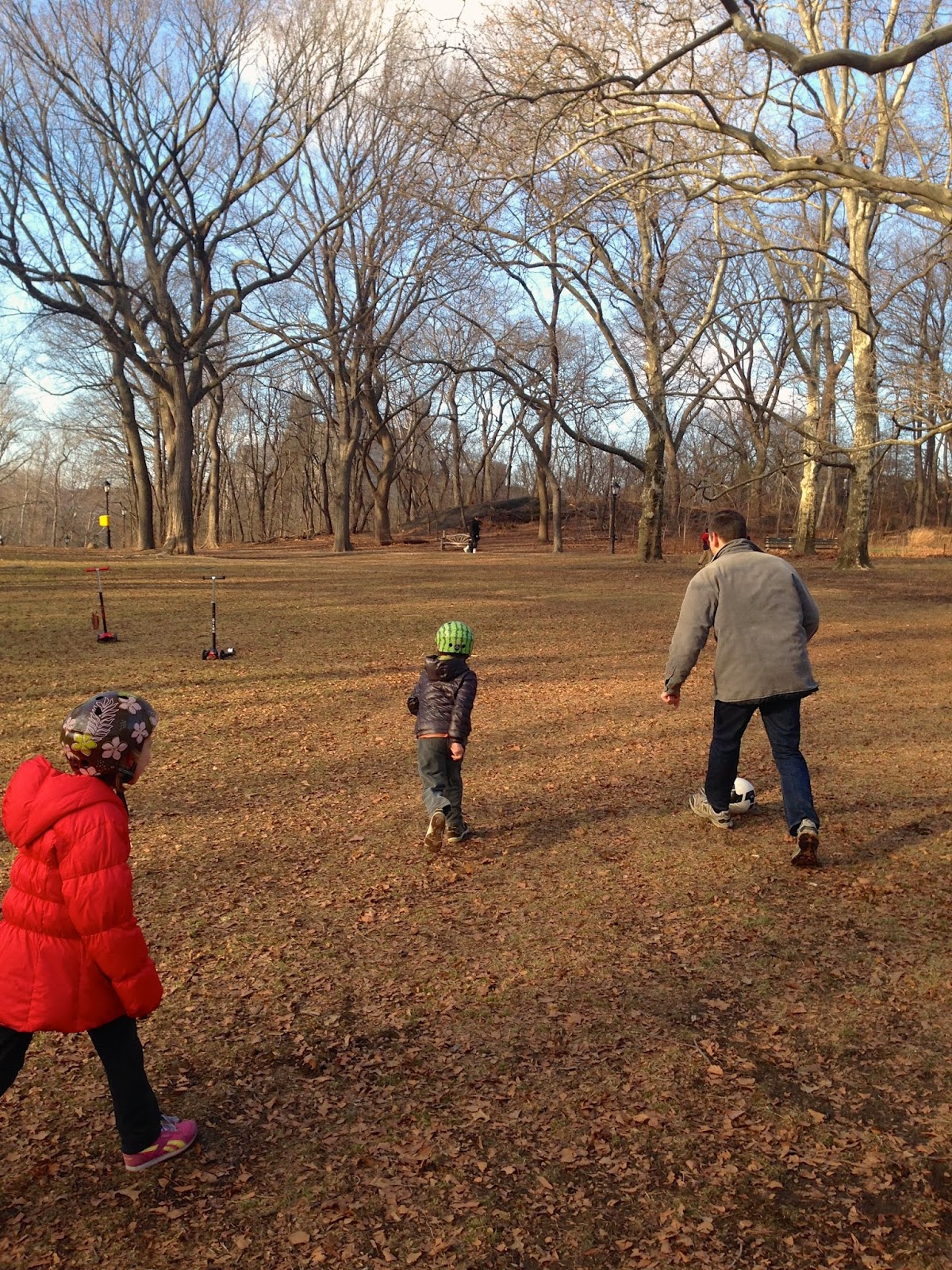 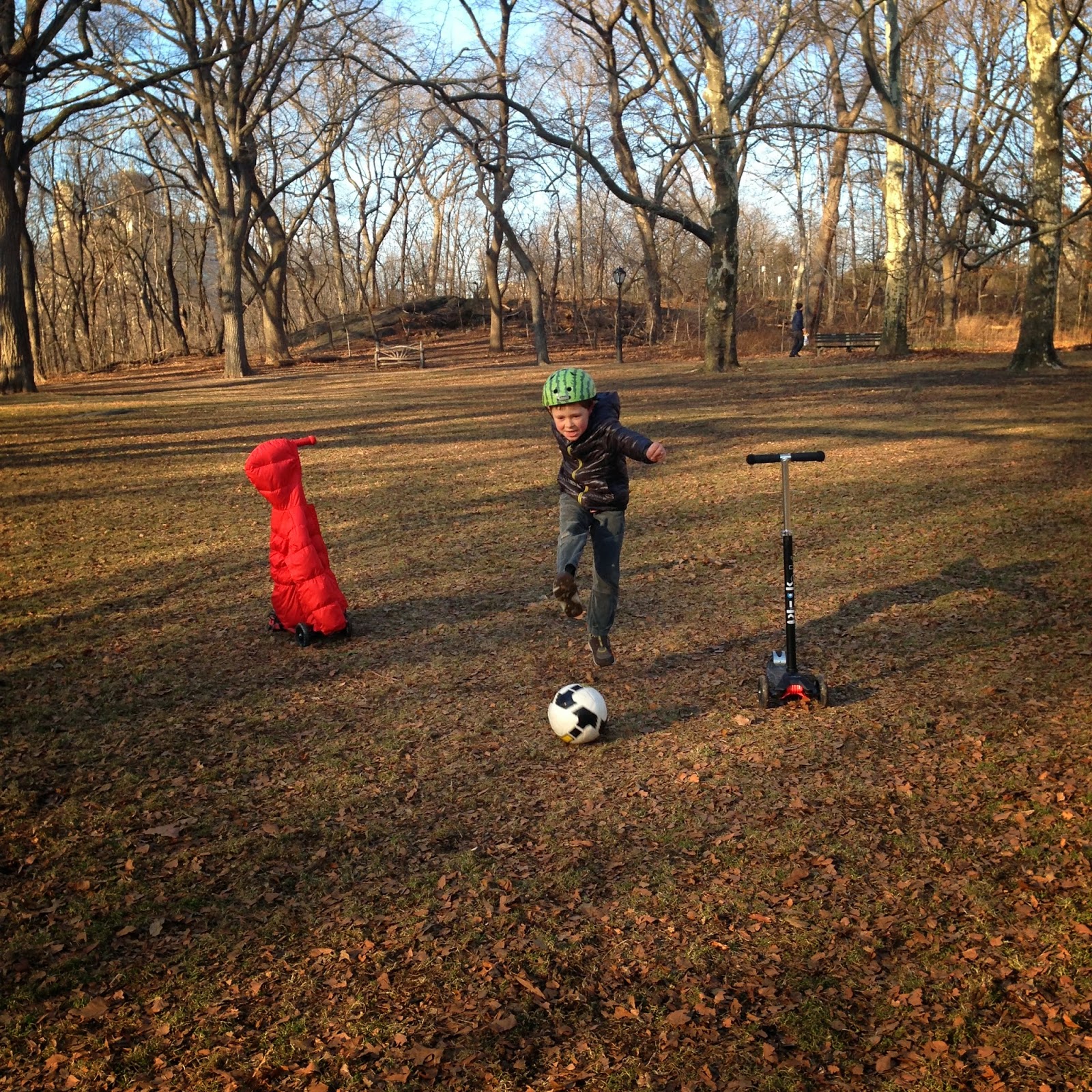 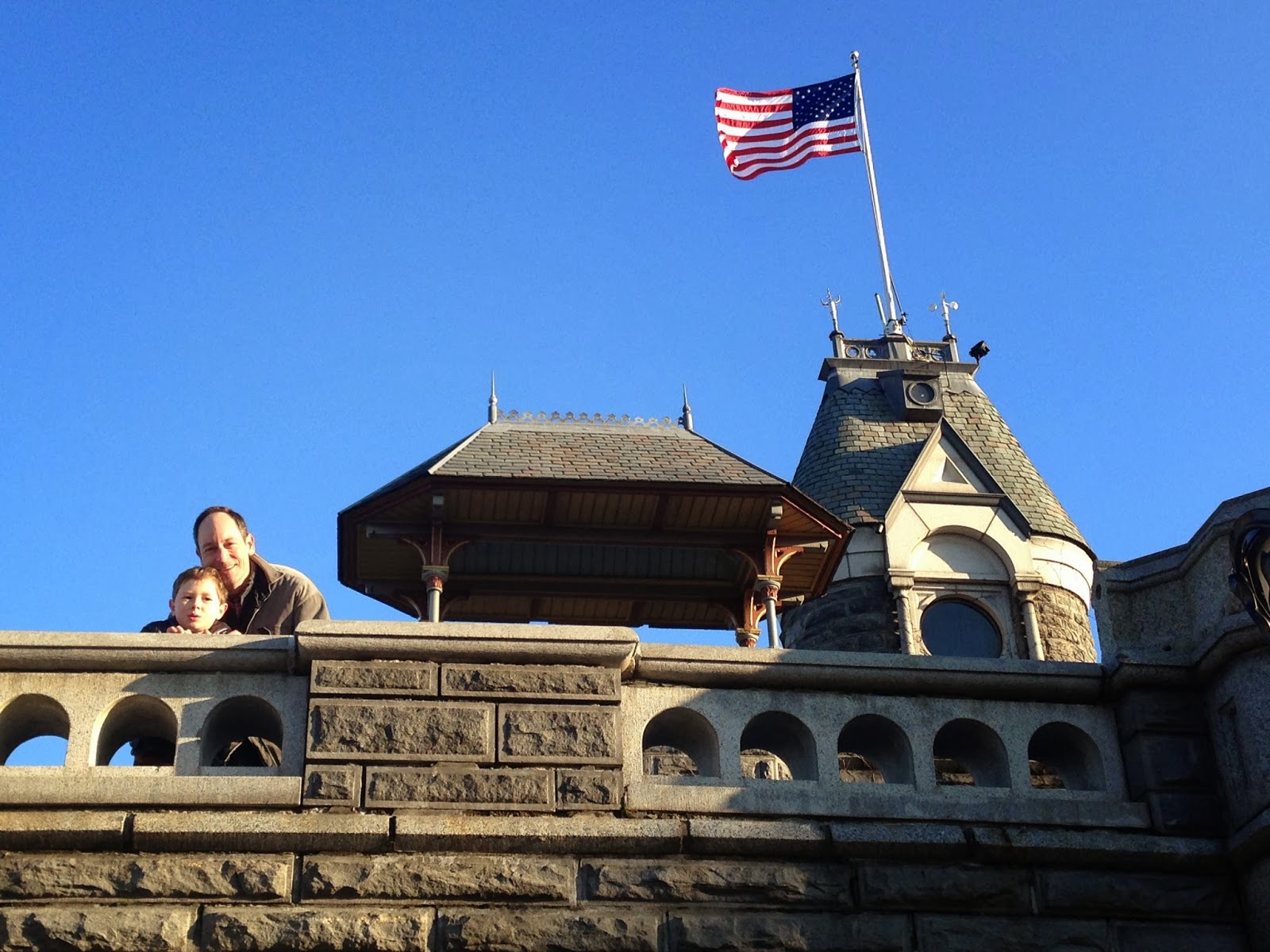