The kids finished their cooking class (in Spanish) last week and the parents were invited to arrive a little early to pick up so that we could taste their creations. 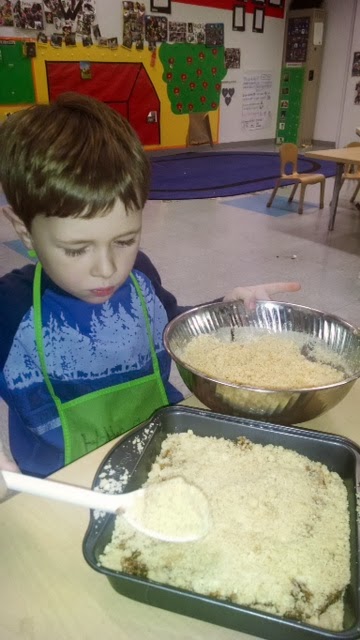 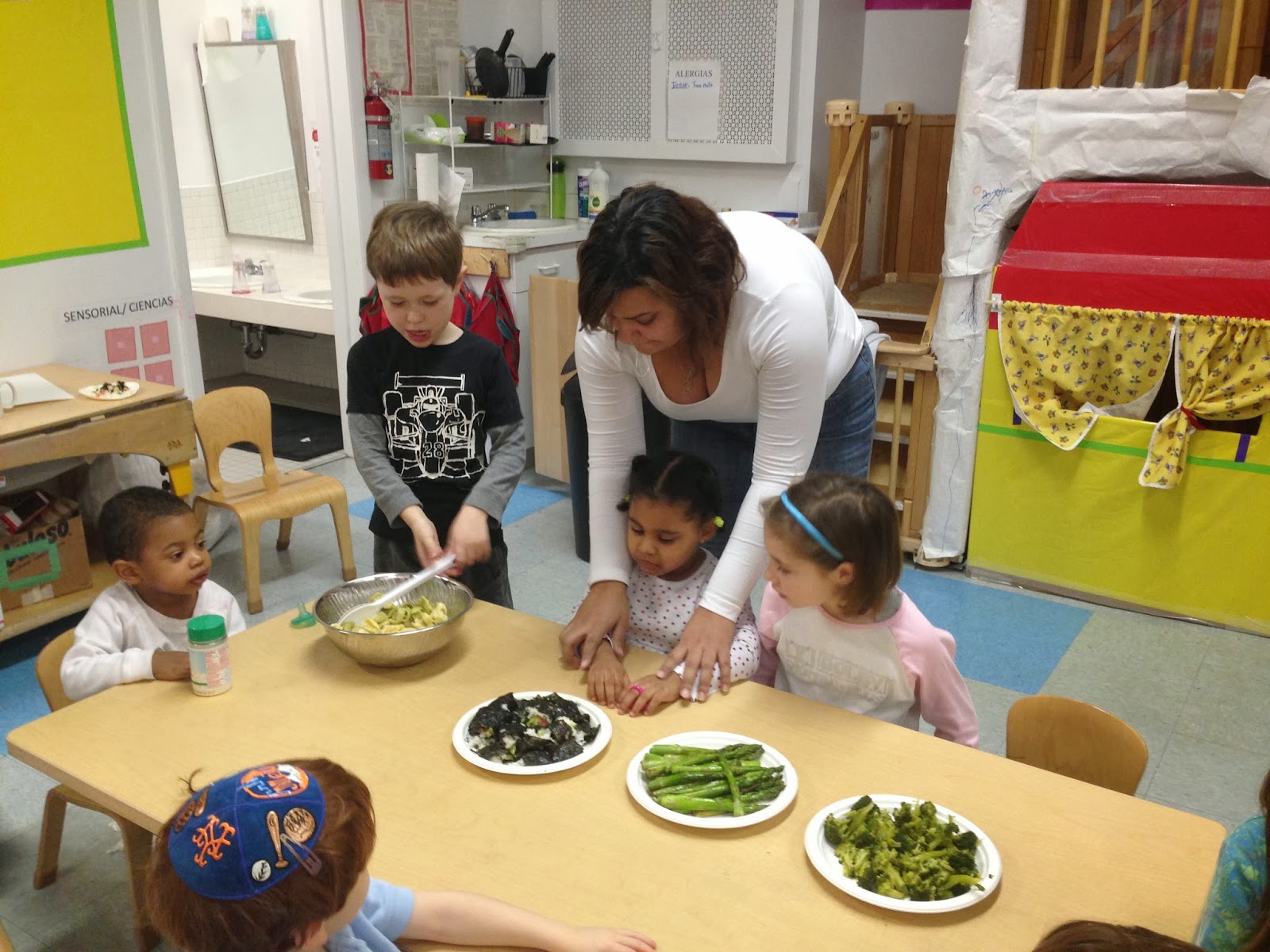 It turned out to be an all green meal: asparagus, broccoli, spinach tortellini and sushi. 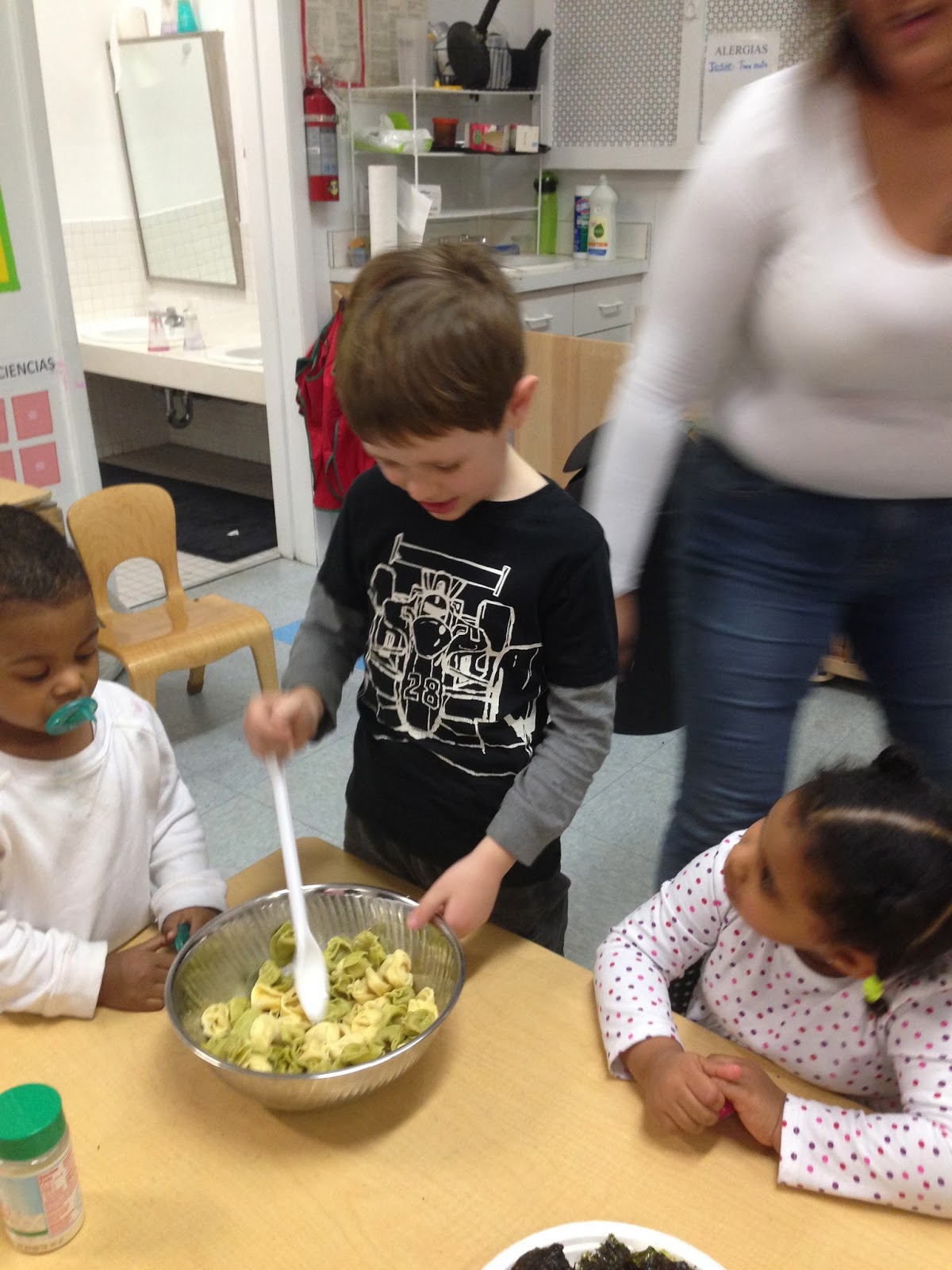 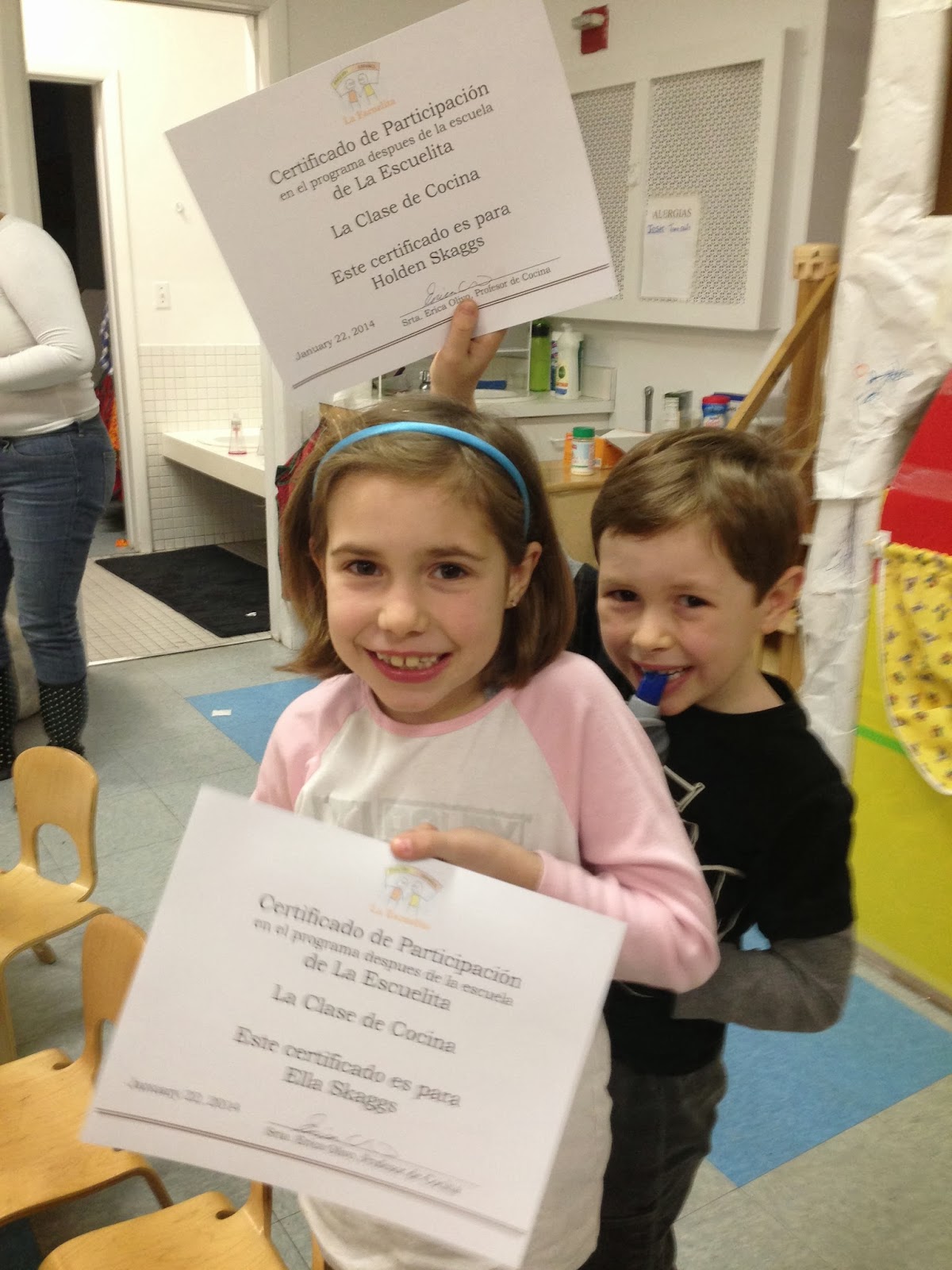 With the weather being so cold for the last several weeks, the kids have been going a little stir crazy.  No recesses, no playground time after school.  And let's just say, they've been a handful...  So Kevin had the brilliant idea to spend Saturday "dividing and conquering".  You've seen our Divide and Conquer days: we each take one child and shower them with one-on-one attention.  It usually does the trick to reset each child's mood.

We split down gender lines with me and Ella going for tea at Alice's Tea Cup and then returning home to work on some sewing projects, while Kevin and Holden "hit the slopes" a block away at Central Park. 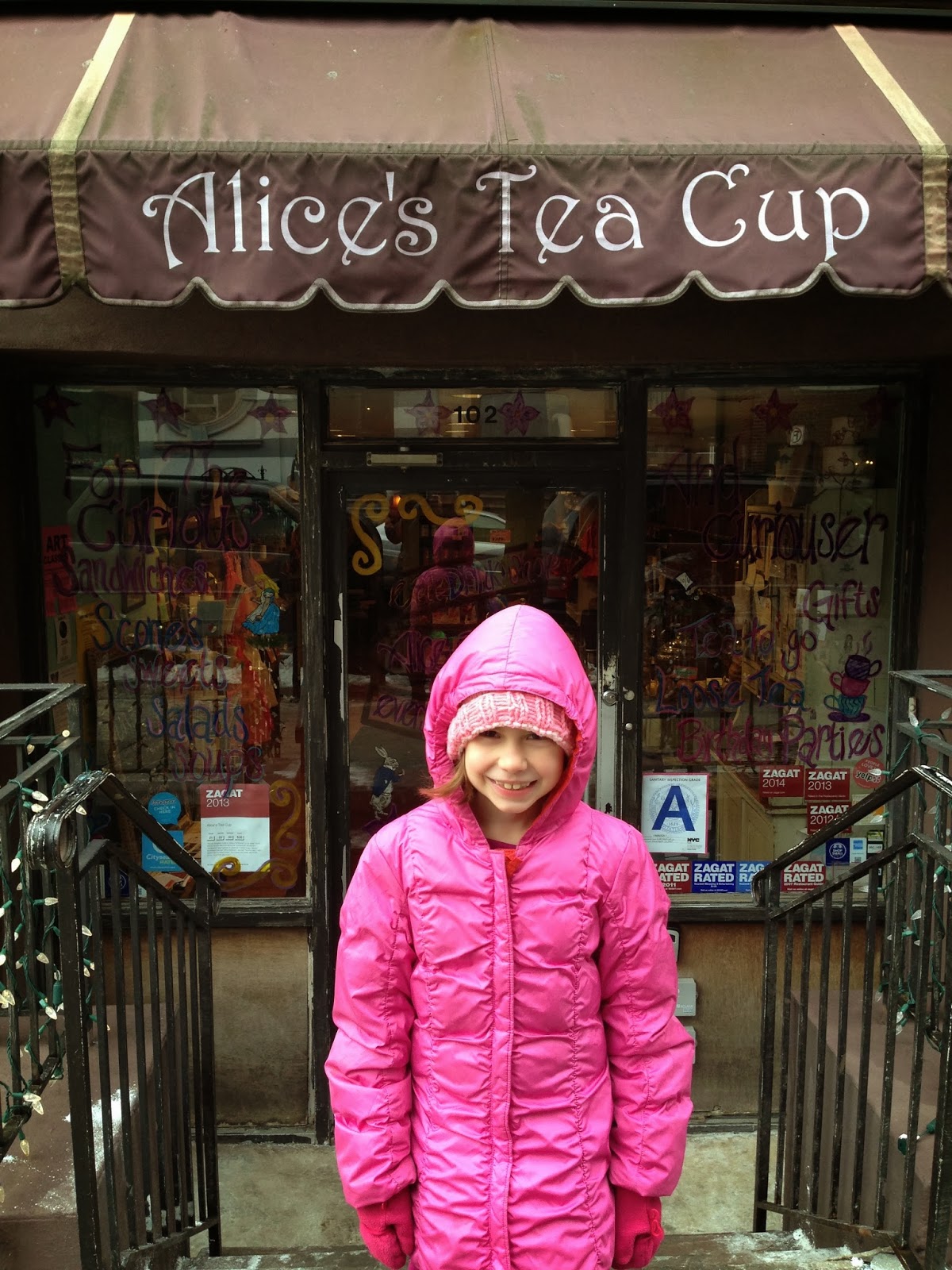 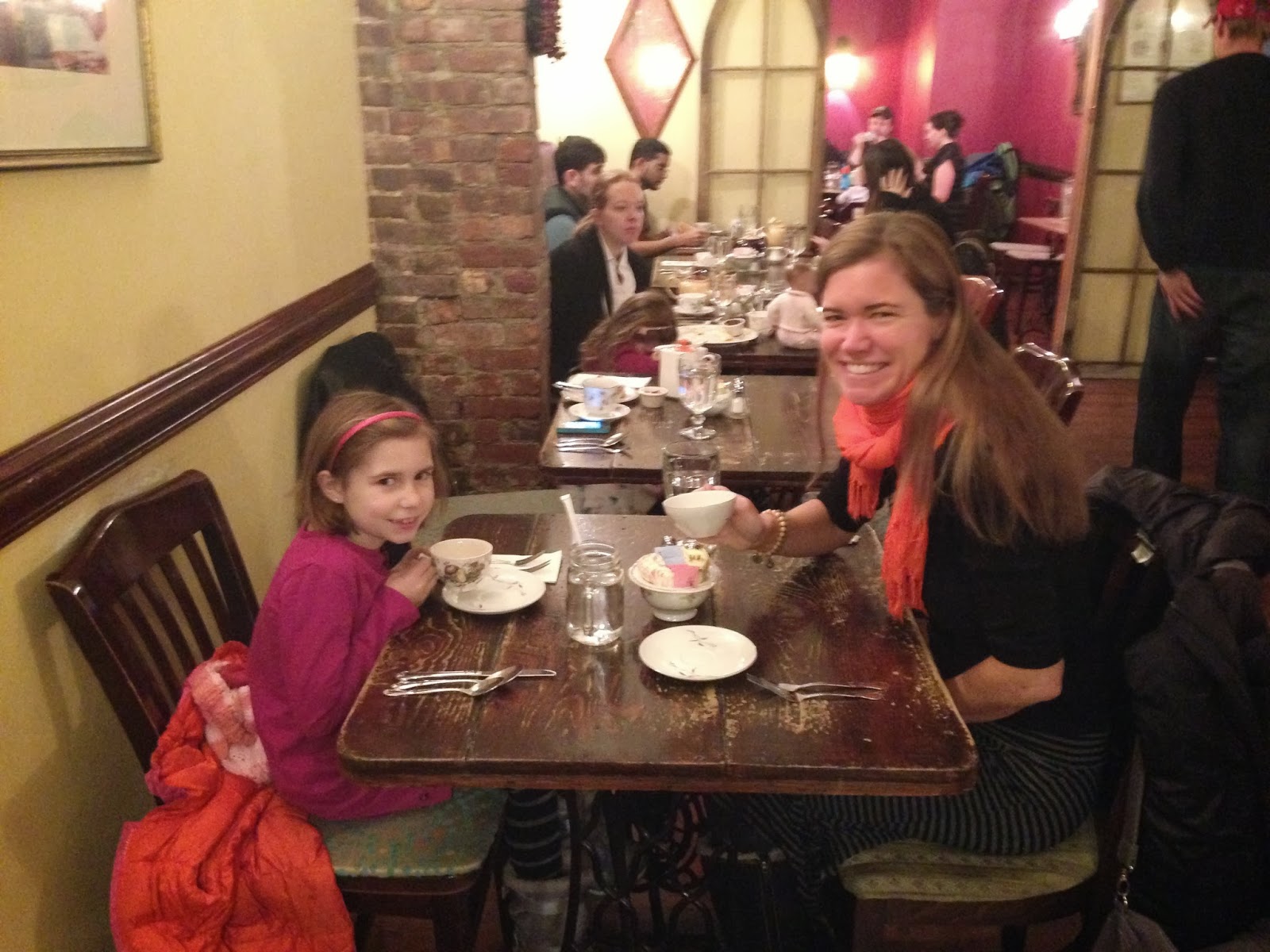 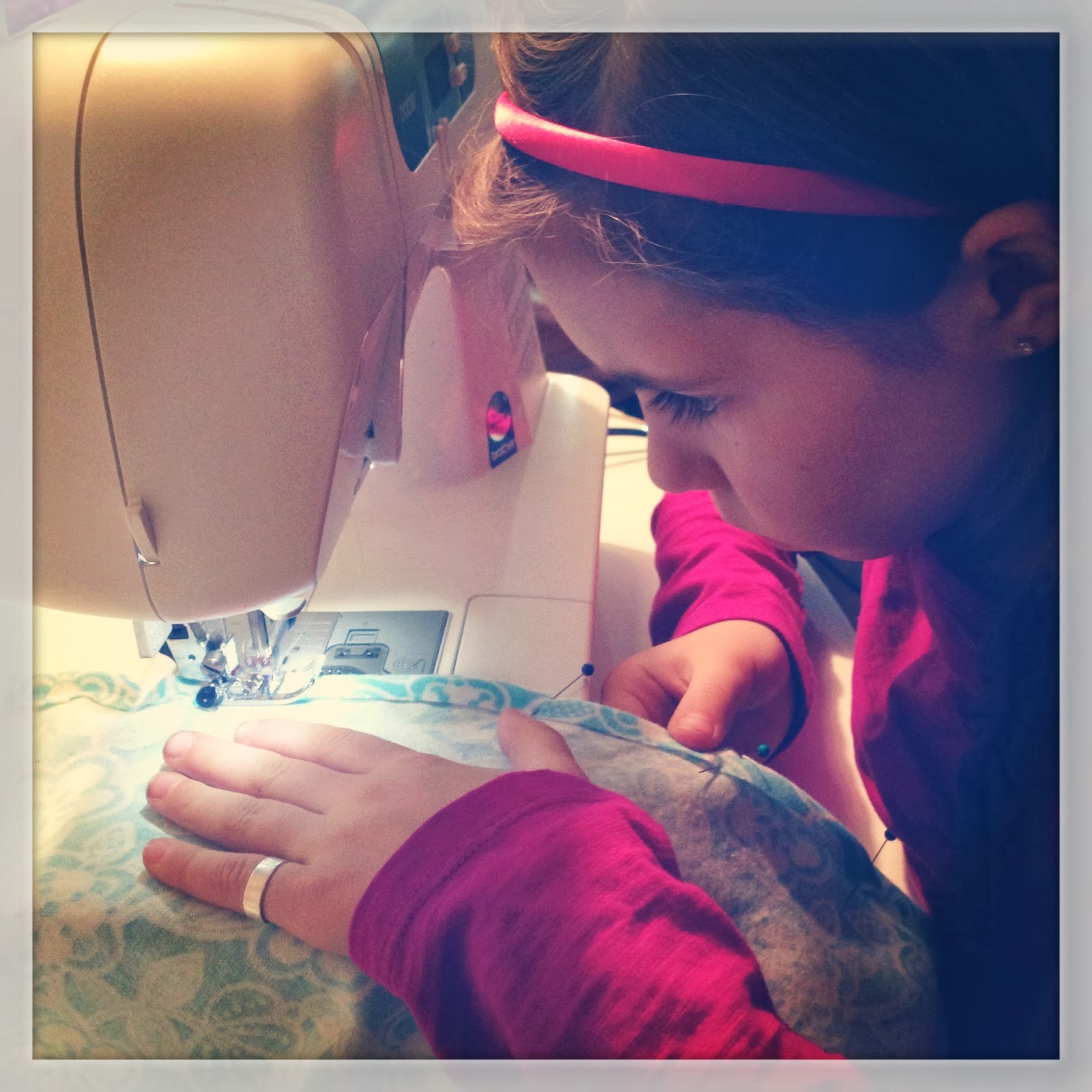 Ella chose to sew a sleeping bag for her American Girl Doll, Kit.  I helped with the cutting but she did all the sewing. 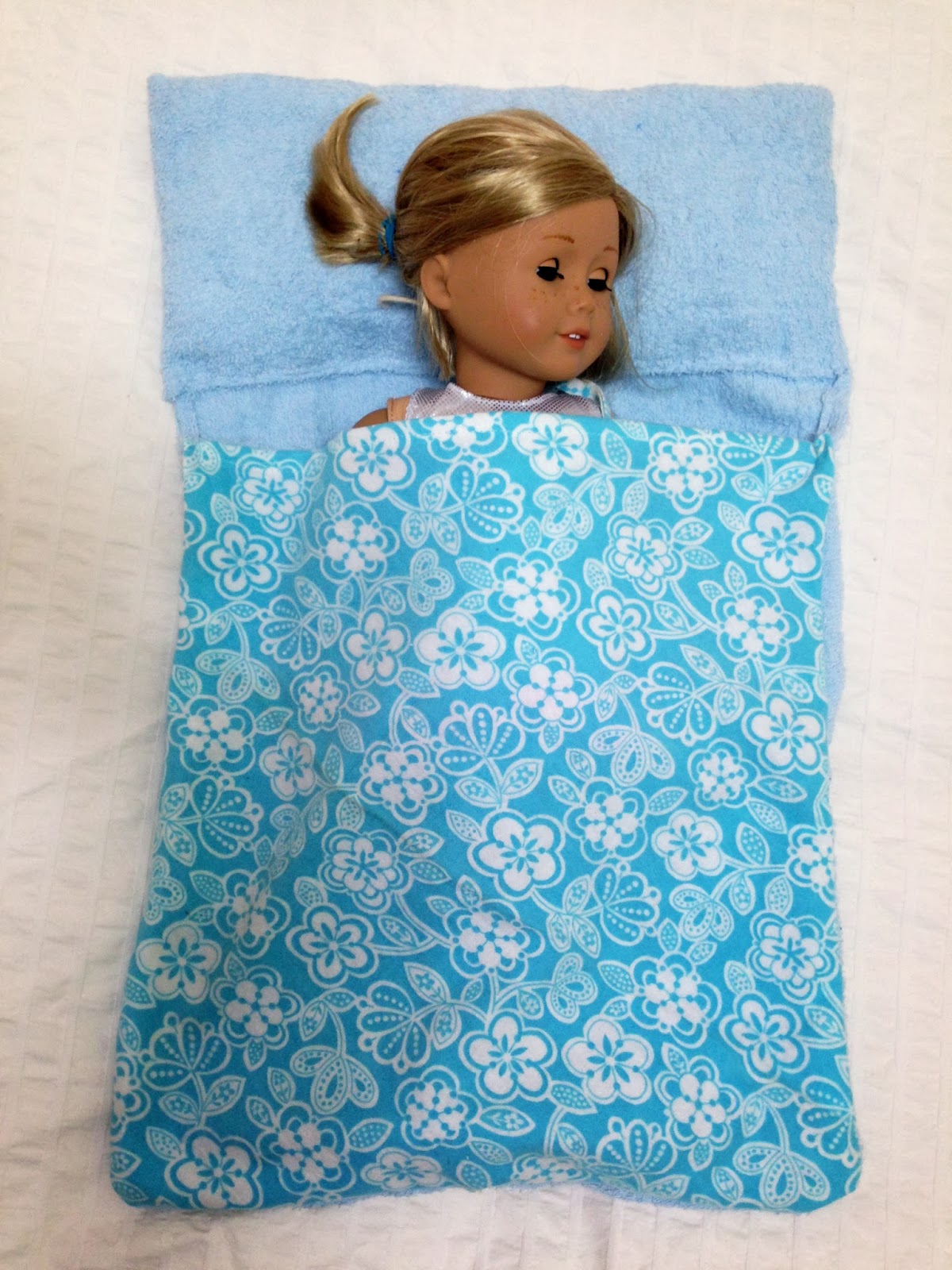 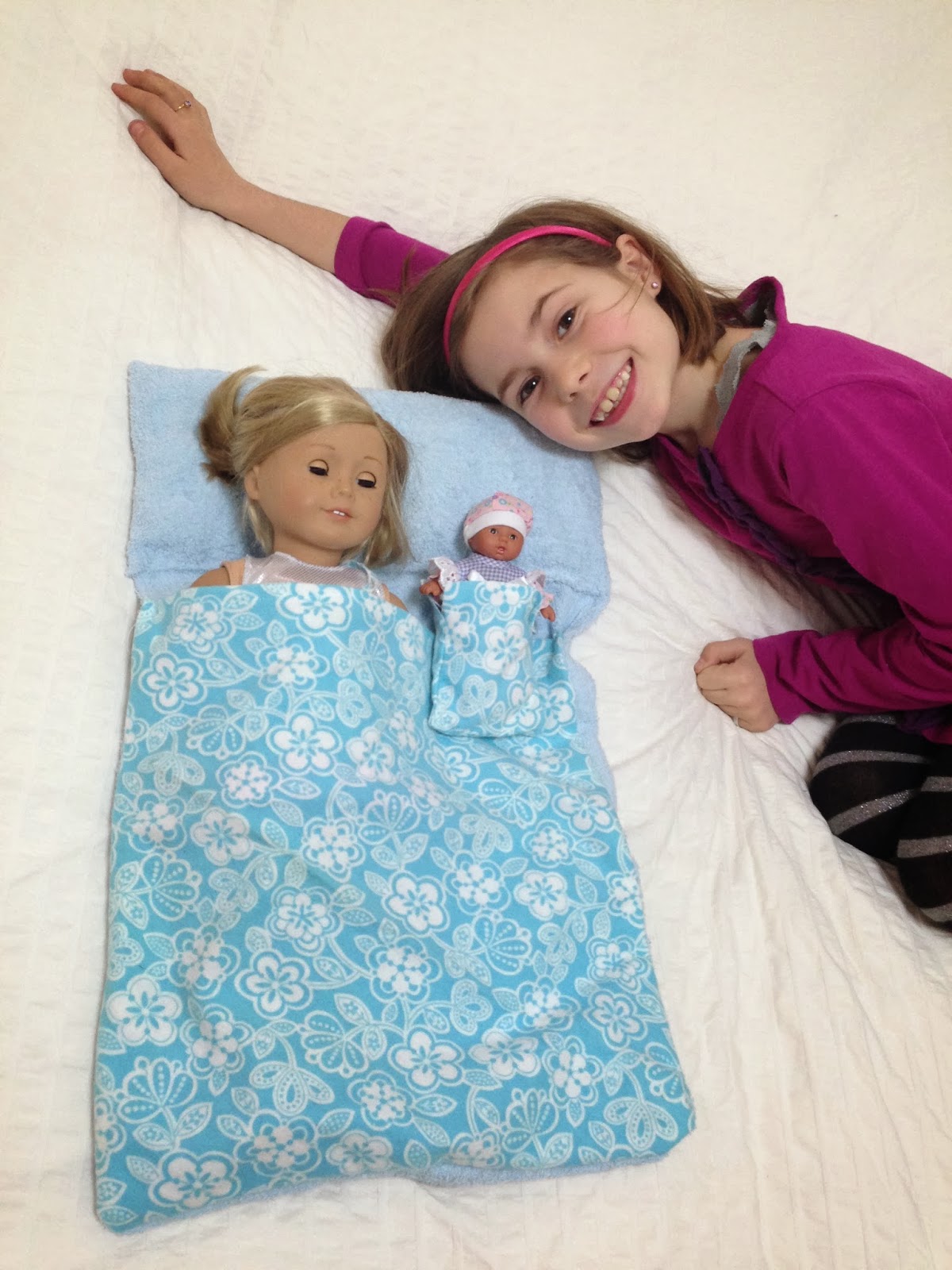 Then of course Kit's doll also needed her own sleeping bag.  Ella made that one when I wasn't even looking.  I was busy sewing infinity scarves (photos to come). 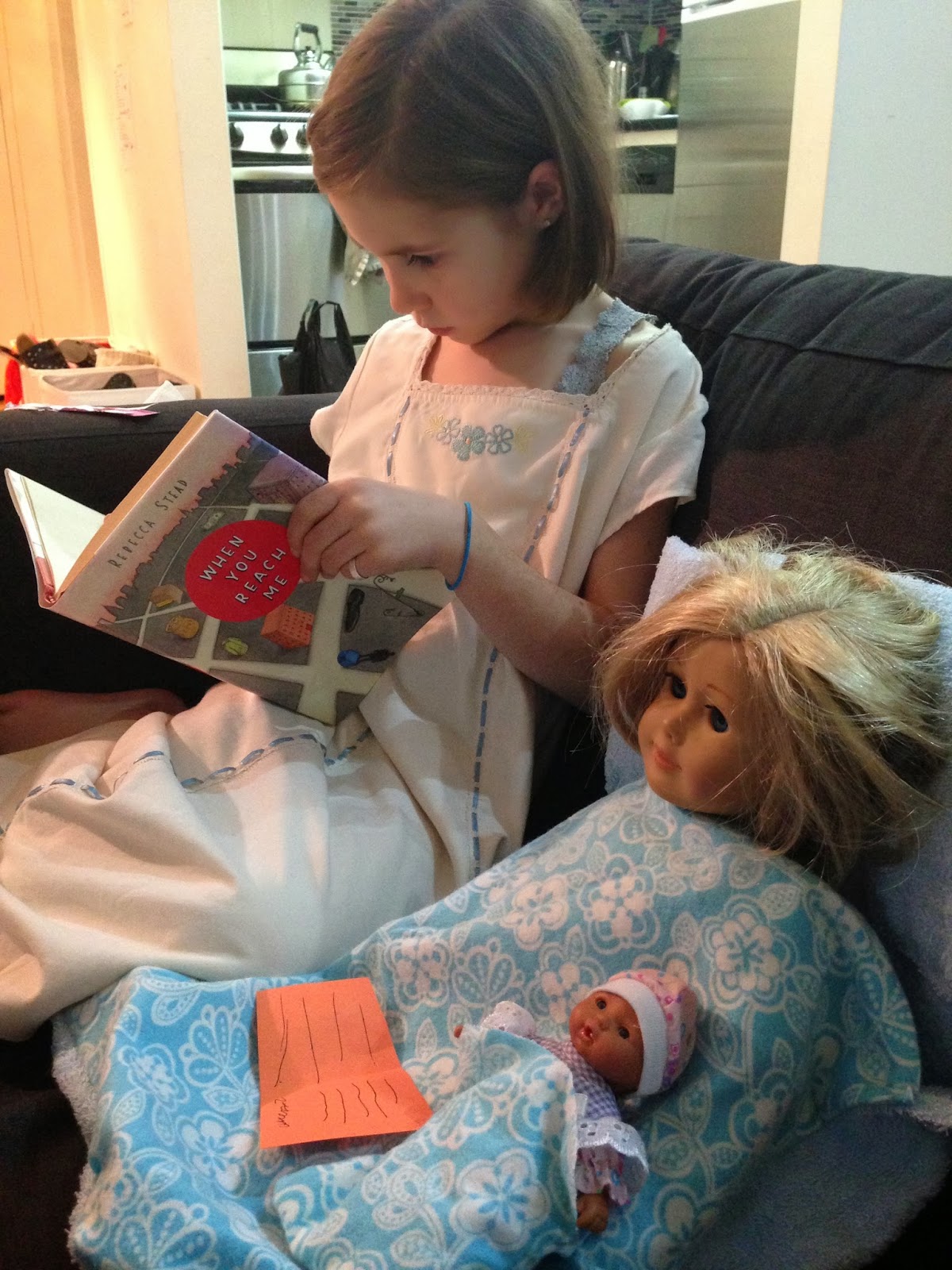 Ella also finished her 100th chapter book, which will be celebrated by going to the restaurant of her choice (she's got a place called Sugar and Plumm in mind). 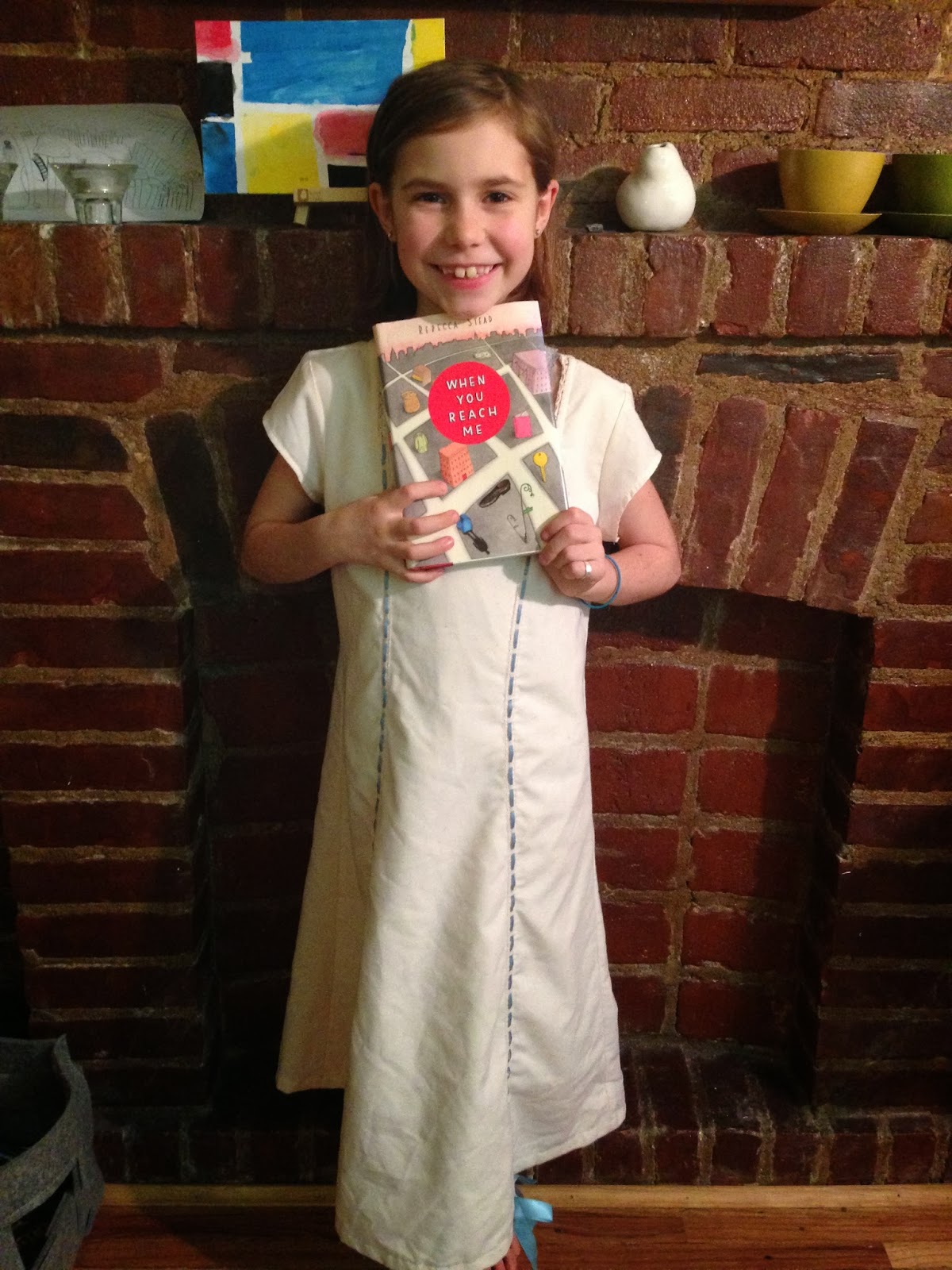 While we were busy being girly, the boys headed over to the "Winter Jam" happening in Central Park.  It's an annual festival of sorts where you can try out winter sports such as skiing, snowshoeing and snowboarding.  I believe there was food and music as well.

Holden was excited to take a snowboarding class and apparently got bit by the bug.  Kevin's already planning our first real snowboarding weekend...ugh. 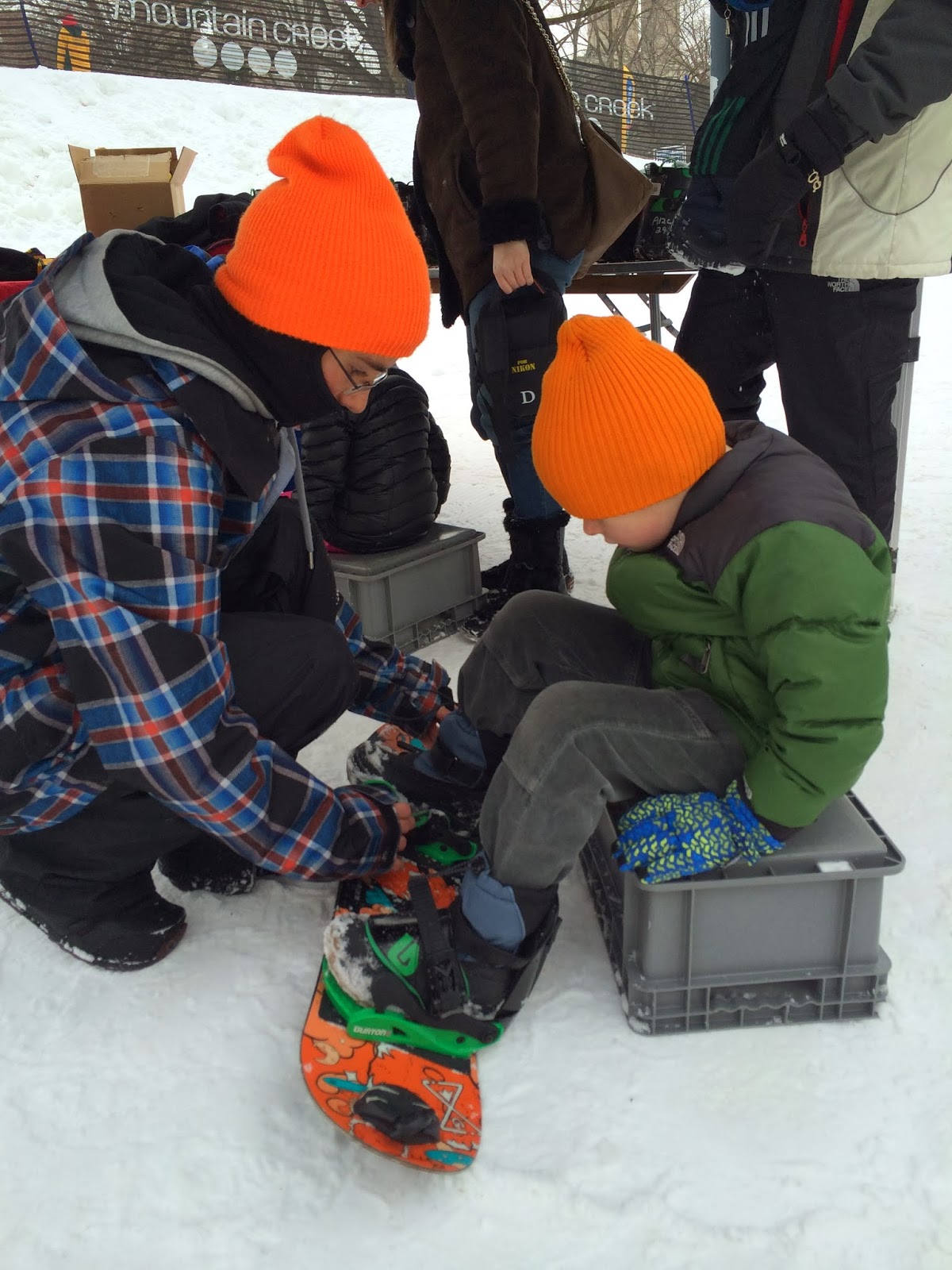 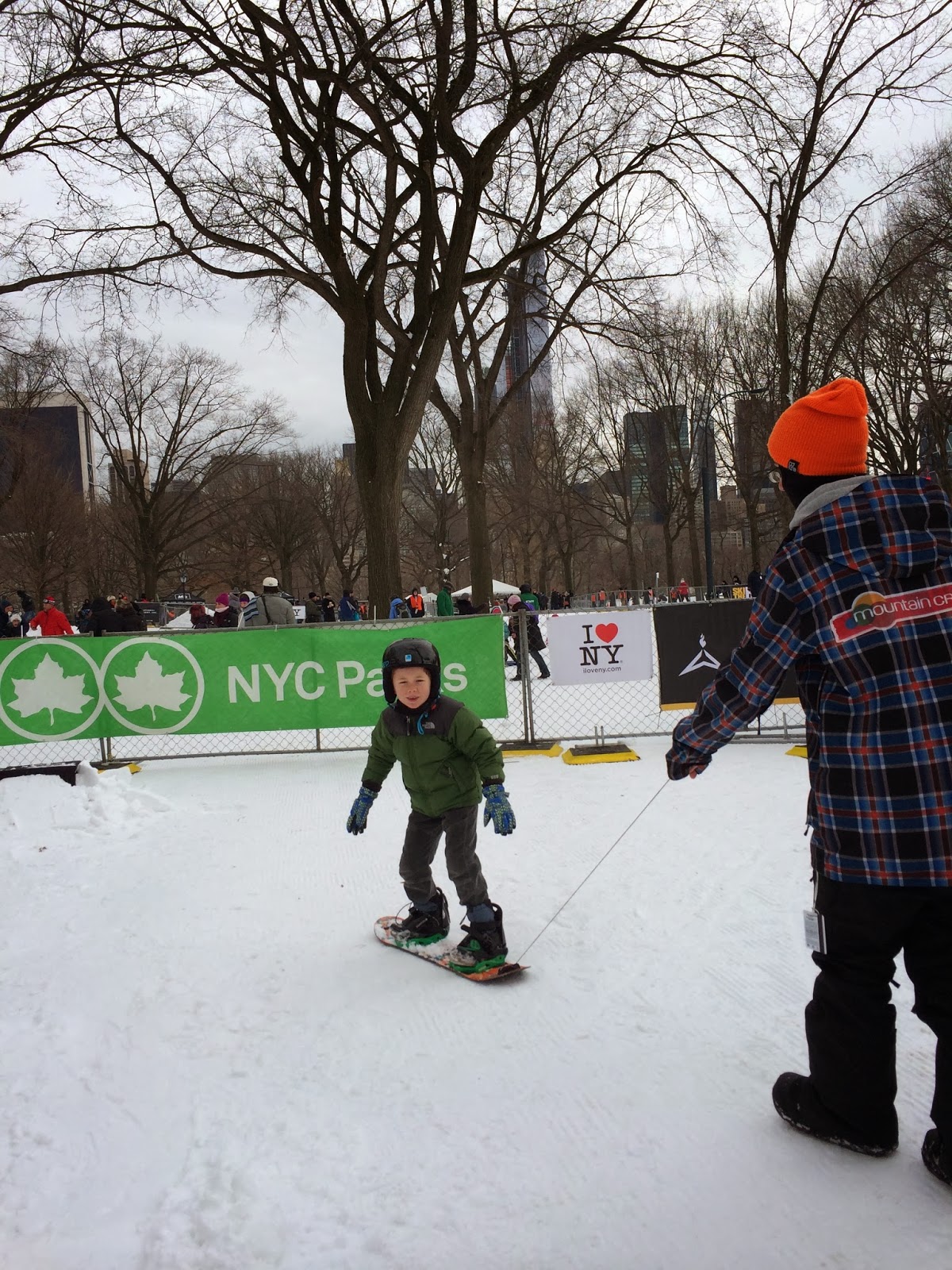 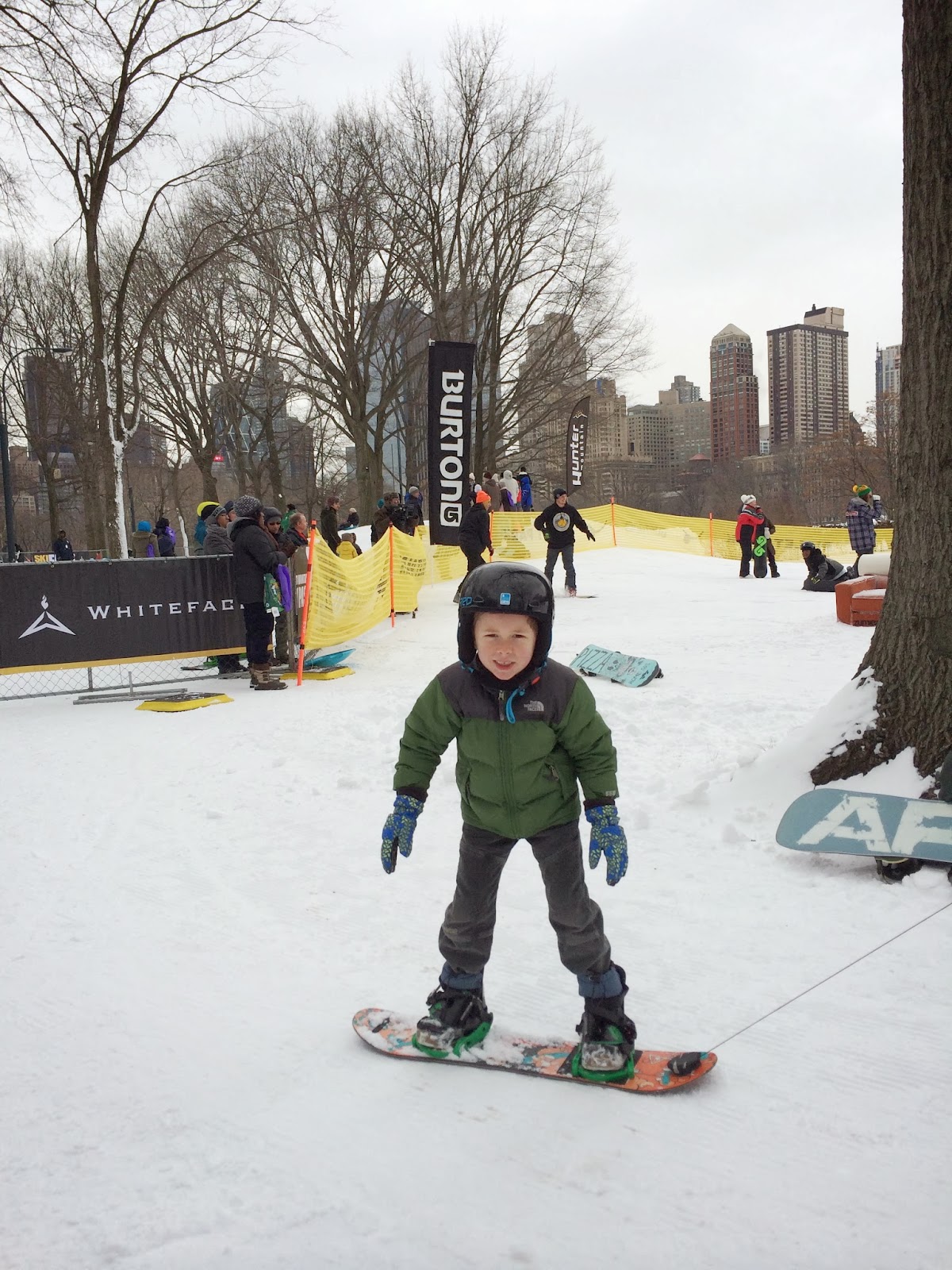 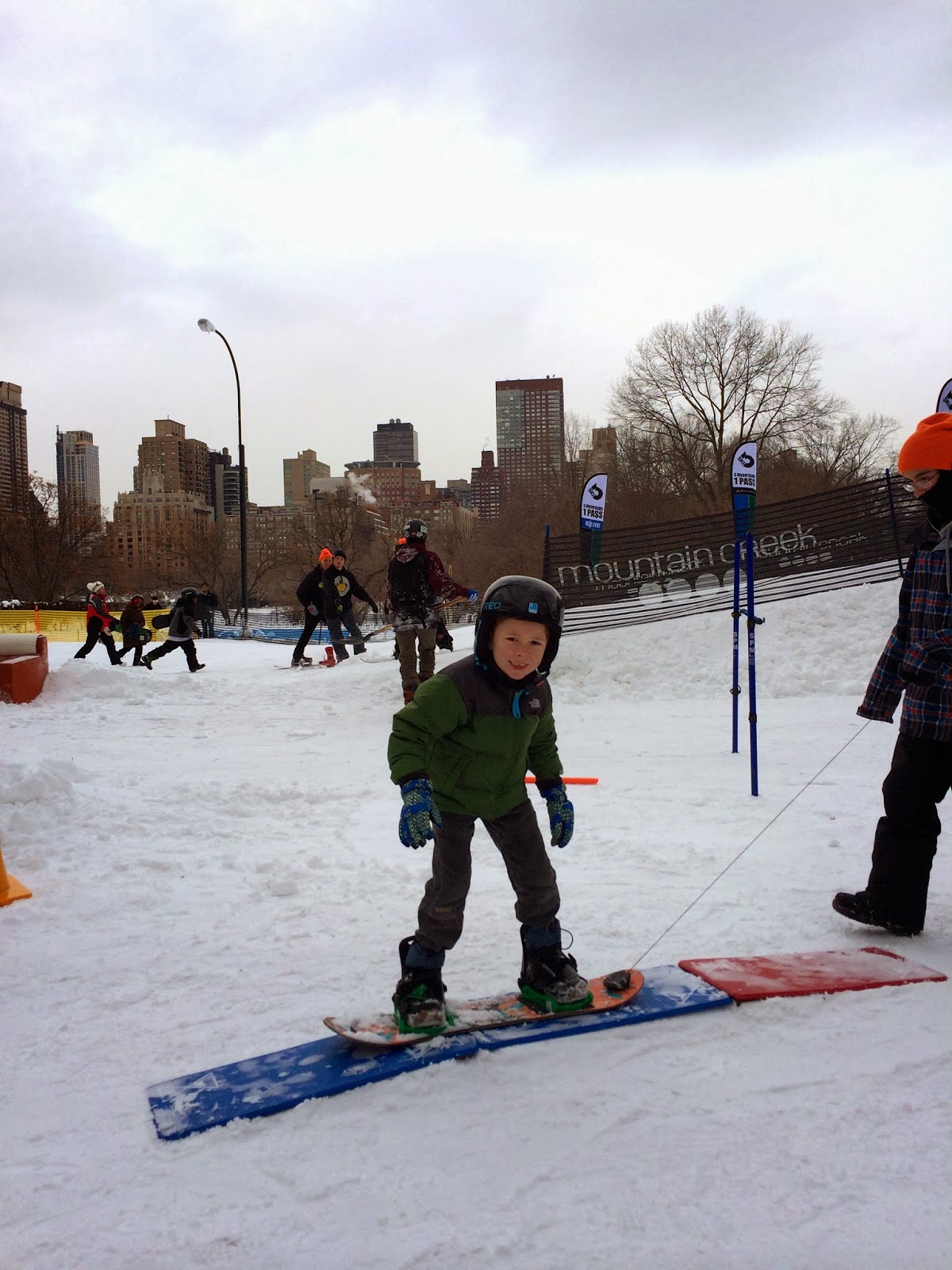 Sunday was another kind of Divide and Conquer day.  Although instead of dividing down gender lines we divided down age lines.  Kevin and I got to participate in a surprise party aboard a bus while the kids went to science class.

Our friend Alina threw a "This is Your Life" type party for her husband Tom's 45th birthday.  We were all picked up downtown by a party bus and spent two hours touring around Manhattan seeing sites such as where Tom first worked after moving to NYC, where he and Alina had their first date, their first apartment, etc.  All while enjoying mimosas and beers and meeting new friends.  We had a such a fun time.  And Tom was completely surprised. 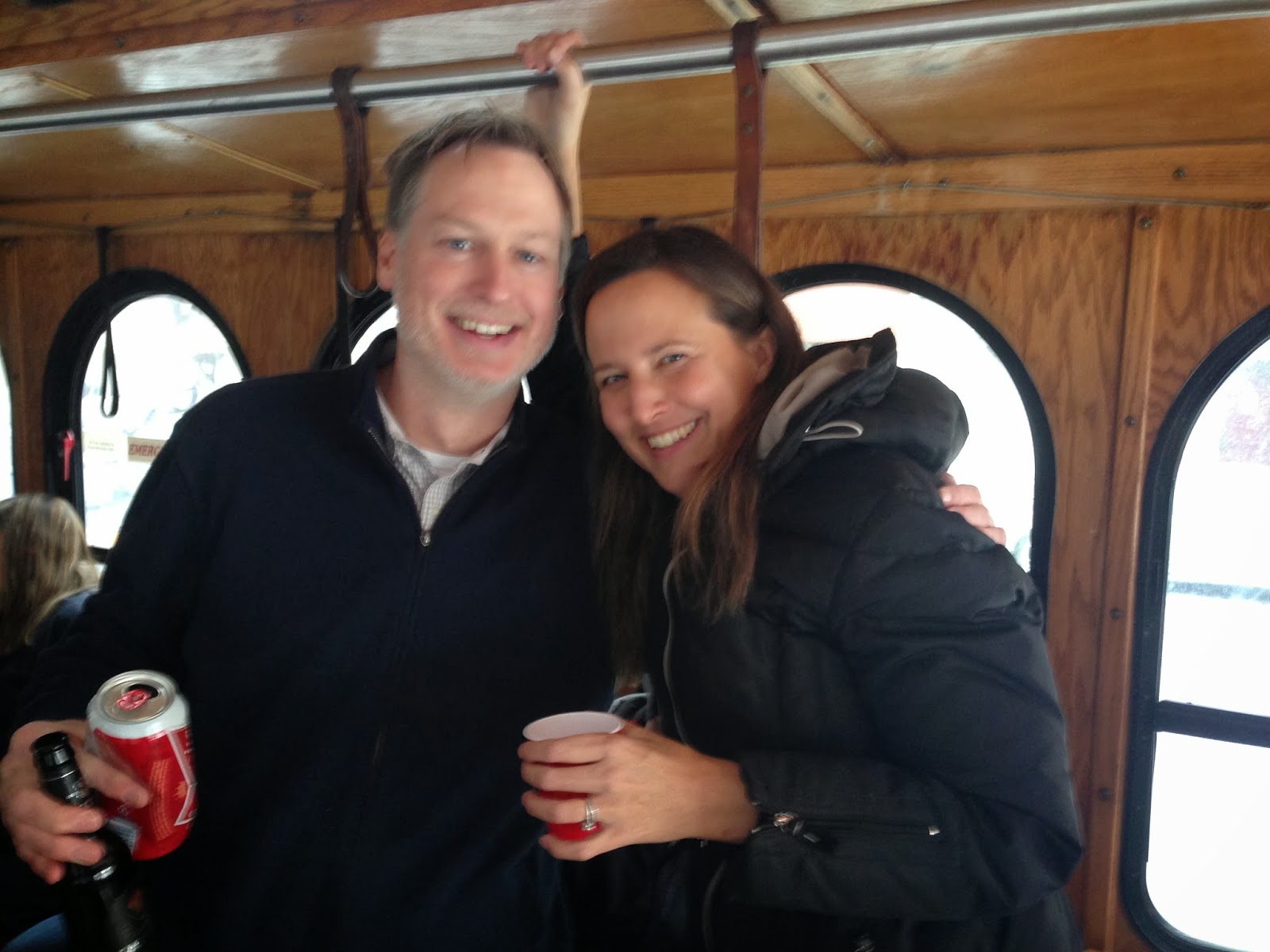 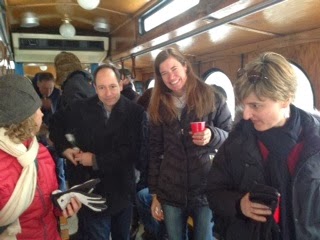 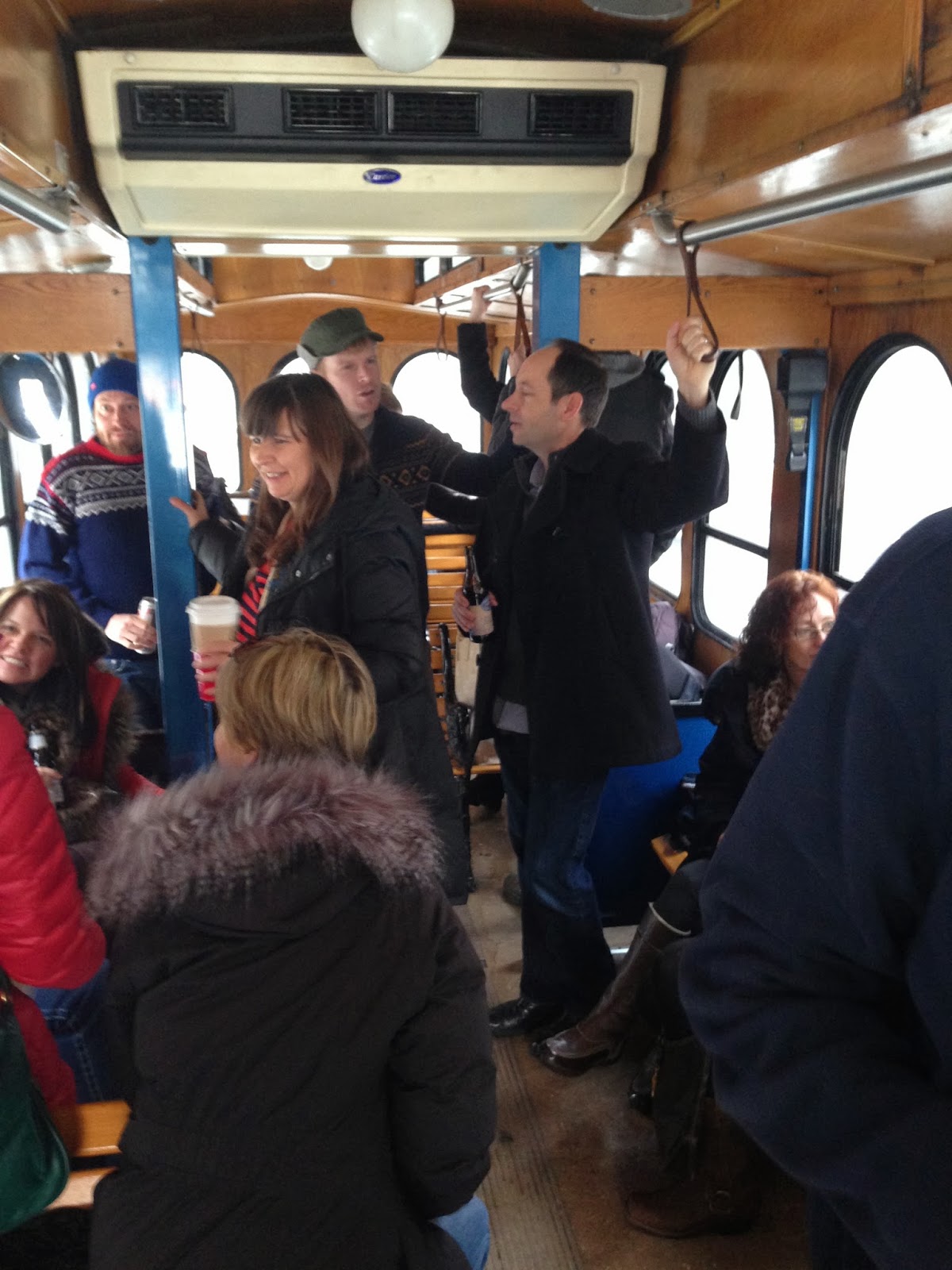 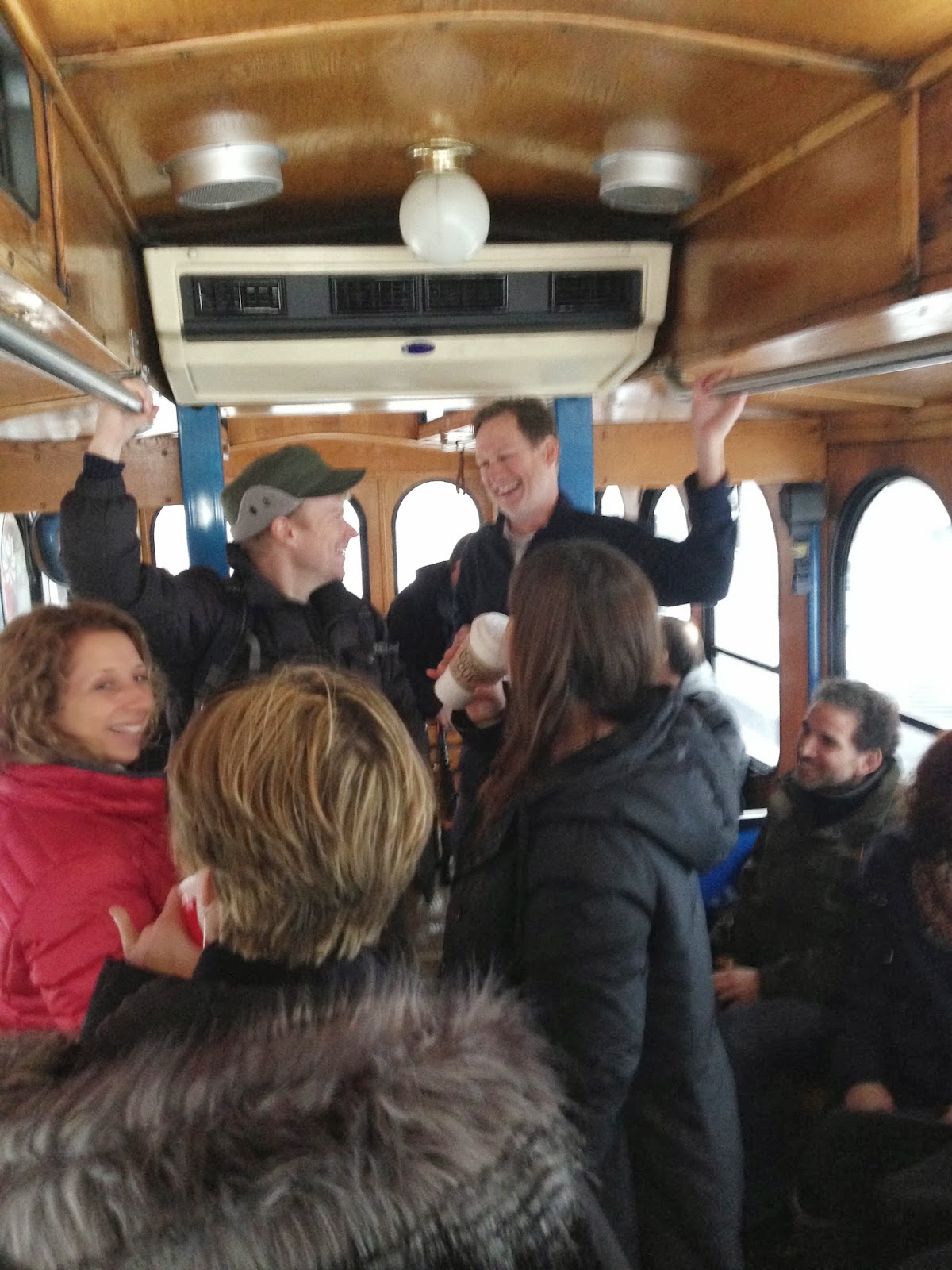 Kevin and I had an hour or so to spare after being dropped off before we needed to pick up the kids.  So we wandered around The Village and had a glass of wine here and a beer there...it was so nice to just have some free time with Kevin.  We even battled over Ms. Pac Man at The Slaughtered Lamb Pub. 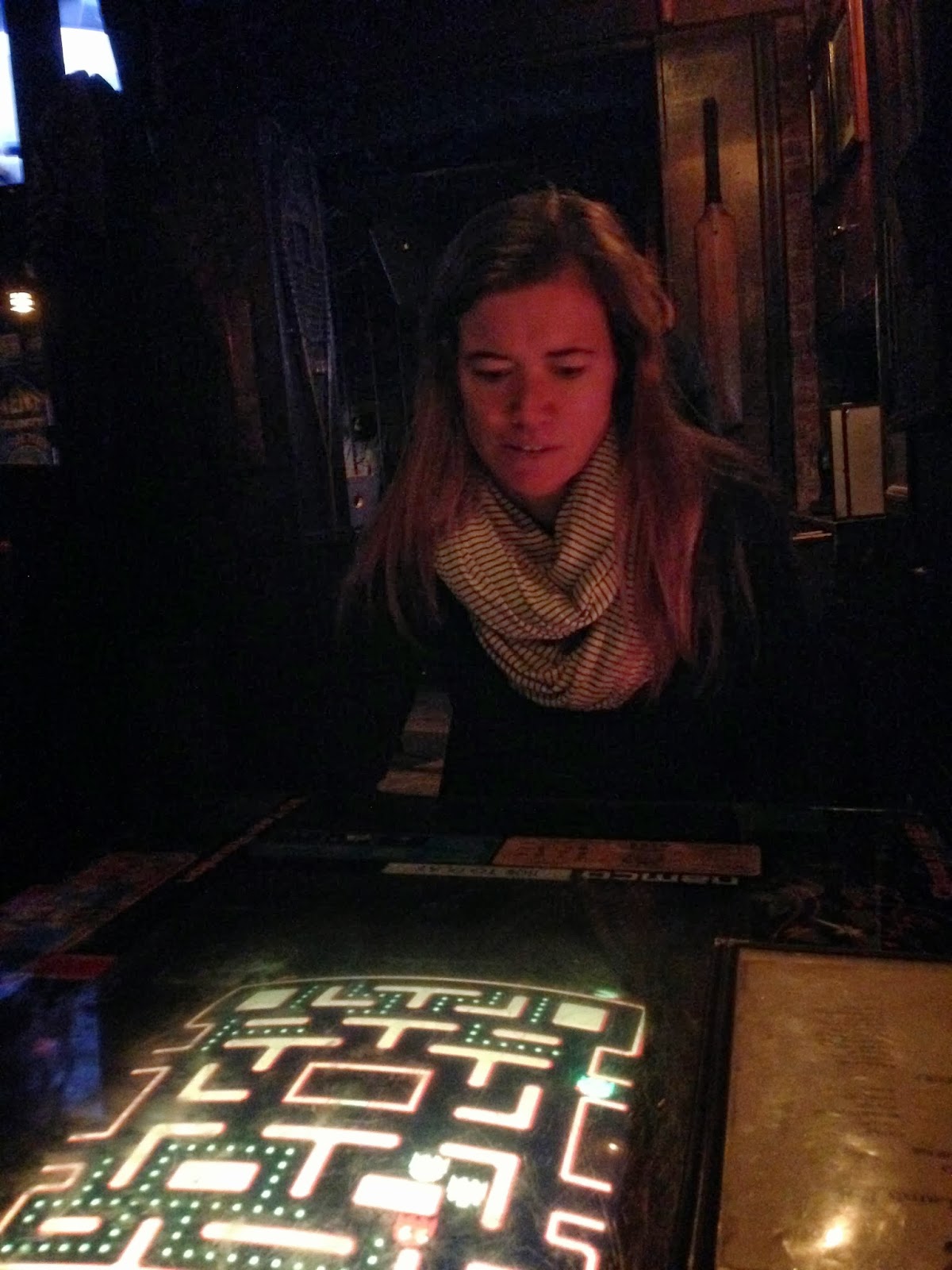 Meanwhile, the kids got to go to a science class at Science Adventure Kids with Alina and Tom's son, Luke.  We've been hearing rave reviews about this science class for a while and Holden especially was SO excited to be going.  This particular class was called The Cellular Experience and was all about cells.  They got to make clay models of cells, see cells in a microscope, sing songs about cells (The Mighty Mitochondria!), get really dirty and messy, playing with gooey things in the lab.  Science Teacher Sarah makes it a lot of fun to learn.  And her lab is a crazy apartment in Greenwich Village - zebra painted walls, an animal room complete with snakes and lizards and hissing cockroaches, and walls and walls of test tubes, diagrams, books and tools.   The kids spent the whole subway ride home telling us all about the nucleus, DNA and the differences between animal and plant cells, much to the delight of the grandma sitting across from us. 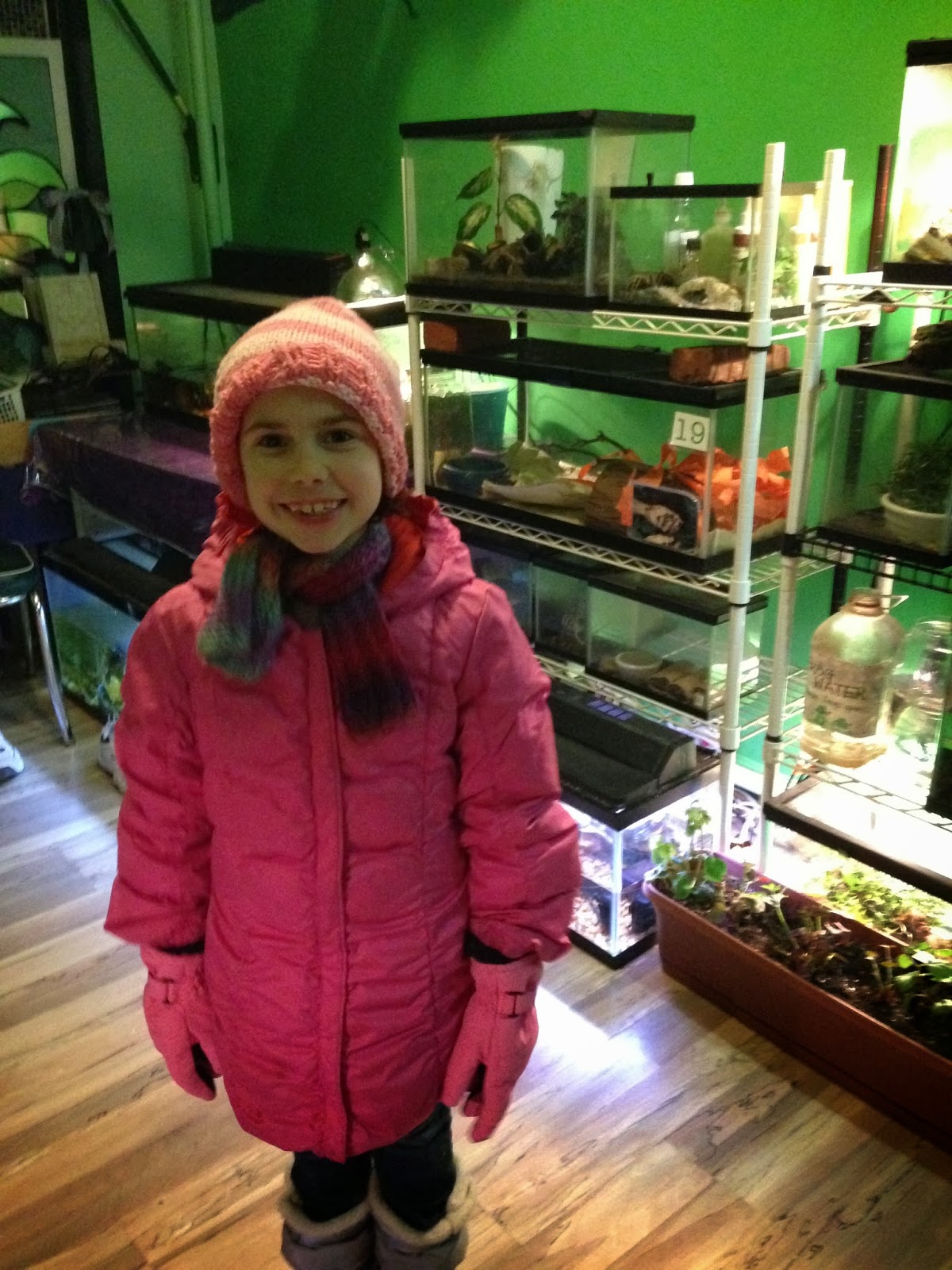 Ella had been skeptical before she went.  More school, she thought.  When we picked her up after the two and a half hour class she had that grin on her face that you see above and said it was WAY more fun than she thought it would be.  When I asked her if she learned some things in addition to having fun, she said, "I learned a lot more than I learn in school."  *sigh*  It's a good thing we do so much "school" outside of school.

I hope you people all had fun weekends.