Last night was the American Museum of Natural History's (aka: our second home) holiday party.  It was actually even nicer than the Halloween party because it was not publicly advertised and members were only alerted via a single email last week.  Therefore, it was a much smaller affair. 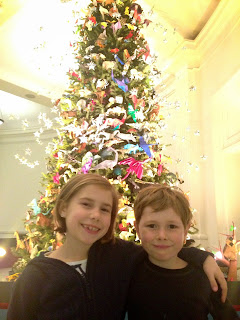 After oogling the Christmas tree in the lobby covered in hundreds of amazing origami ornaments, we headed to the action on the fourth floor - where the dinosaurs reside.  First stop: cookies and milk. 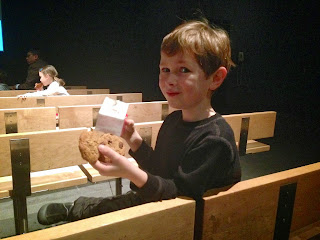 Somehow we got stuck at the cookies and milk station for quite a while.  Luckily, they had a screen nearby with museum trivia.  Did you know that the museum displays less than 5% of their total dinosaur and fossil collection??  Crazy. 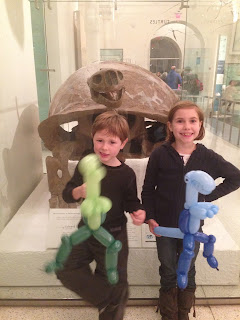 It was fun to wander the halls at night with very few people there.  They had stations set up around the floor including, dinosaur balloons (see above), dinosaur feet making station (see below), 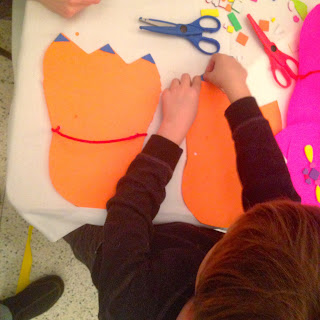 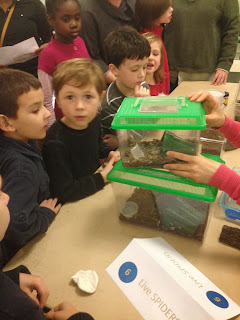 And even several 3-D printers which were printing out tiny dinosaur feet fossils for the kids to take home.  We had never seen one of these printers in person.  Too cool. 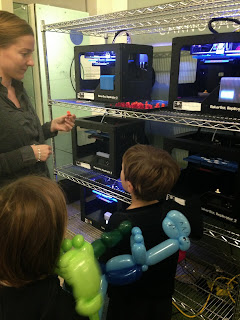 After several more tables of arts and crafts, coloring and puzzles, freebies and goodie bags, we headed home in the bitter cold - a little too late for a school night.

Today I decided to test a new theory that in fact, brunettes have more fun. 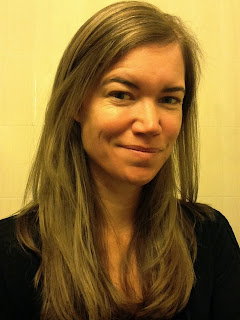 PS - Thanks for asking.  My mom did just fine in the surgery (except for the post-surgery nausea and vomiting - a habit we both share after surgeries).  We'll be able to sign her cast in two weeks when we visit for Christmas.