Sorry Grandmas, for missing Monday.  Since you no longer have children in school you probably forgot that it was Columbus Day.  No one but school age children seem to celebrate it anymore.  Kevin didn't have it off work, businesses are open.  And so with two little ones wanting my attention, there was no time for a blog post.  Instead, we spent the day with our friends at the Bronx Zoo. 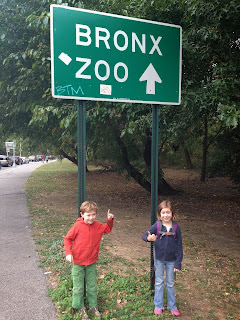 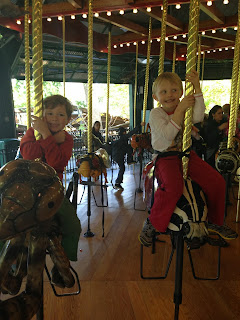 But hold your horses, Gretchen.  These people want to know what's happened since your last post...


On Friday, our little readers were honored with fame and glory for reading at least ten books over summer vacation.  They were entered into the school's Reading Hall of Fame which includes walking onto the stage in front of the entire school, receiving a certificate and necklace from the principal and getting their photos on the walls in the hallways.  You'd have thought Holden won the lottery, he was so excited. 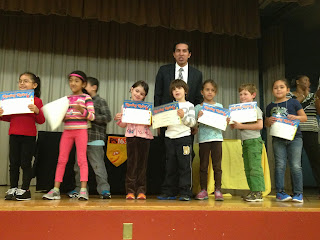 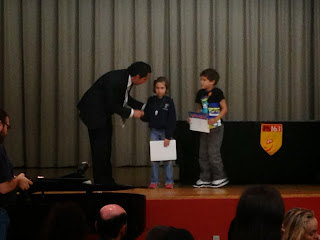 Friday was also Authors Celebration Day in Holden's class where the parents come in after drop-off in the morning and get to read stories the children have written in class so far, illustrated and all.  Kevin and I were pretty proud of Holden (who absolutely hates to write) especially of his Spanish pieces. 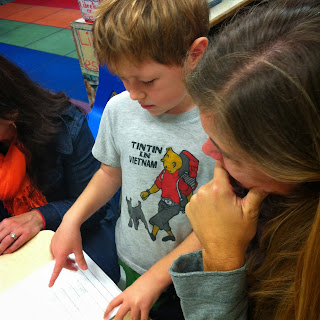 The kids were beyond thrilled this weekend (Kevin, less so) because we got to dog-sit adorable little Chester all weekend long! 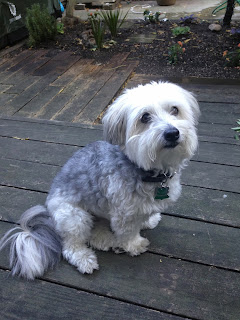 Chester belongs to our friends Joel and Mimi who were headed to Boston for the long weekend.  Chester was a complete gentleman and encouraged us to explore more parts of Central Park that we had yet to discover. 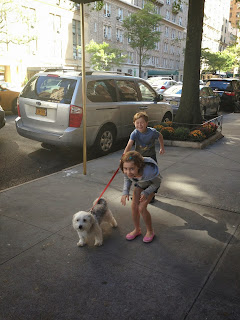 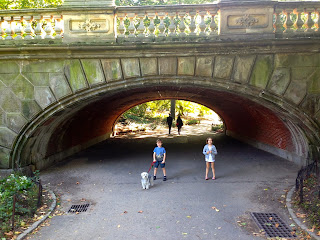 We walked for a few hours on Saturday, finding new sculptures, bridges and lakes.  We even witnessed a marriage proposal and a wedding.  There's a lot going on in Central Park on any given Saturday, especially a beautiful fall day like this one. 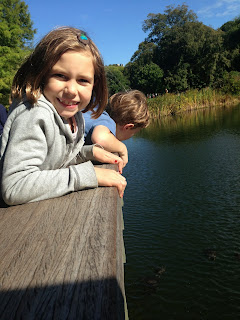 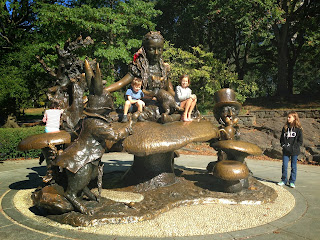 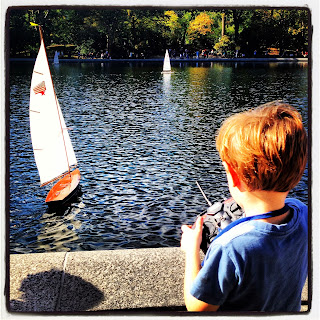 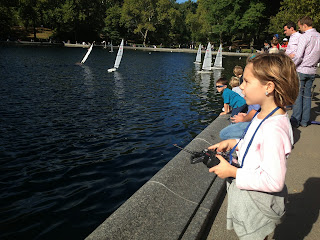 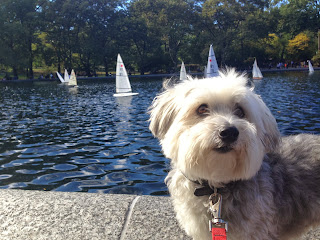 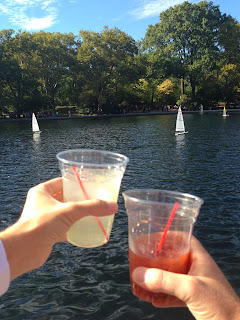 Mom and Dad even got to enjoy a Margarita and Bloody Mary, lakeside.


Sunday morning while Kevin and Holden were at Little League, Ella and I devised an urban adventure for the four of us. 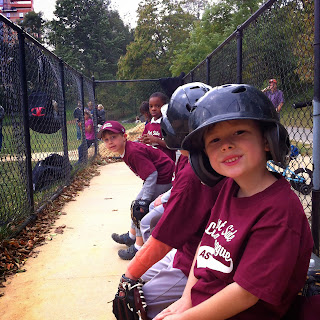 A British street artist named Banksy has been in New York City this month covertly putting up art installations in the middle of the night around the city.  Some of his art is big, some small, most of it is satirical and/or political.  What he does is illegal (vandalism) and so no one knows his real name or what he looks like.  Kevin and I watched a movie made by him last year and have been wanting to see his work ever since.  Through Twitter I was able to find where three of his recent works are in Manhattan (he's recently done others in the other boroughs as well).  I mapped them out and the four of us set off to find them.  We found two of the three but the third one was already painted over (perhaps law enforcement is trying to discourage him).  You can see more of his New York works at his website.  But here's what we found. 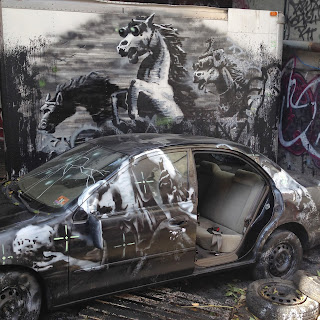 This piece was done in an abandoned lot on top of an old delivery truck and junked car.  Someone has already stolen the back door of the car since he did the piece.  His work is worth a lot of money now. 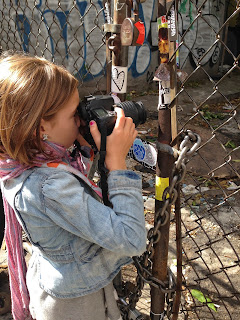 Ella brought my good camera for the day to record what we saw.  They were both pretty impressed by this piece. 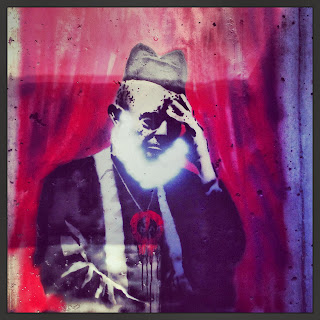 This is the second one we found.  It's in a concrete box at a construction site and it's called Concrete Confessional.  Someone has already vandalized his vandalism by adding the beard. 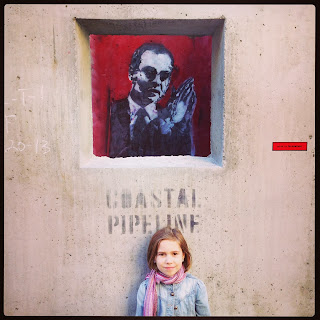 And then a copycat painted a similar one right next to the original.

It turns out the Lower East Side of Manhattan is filled with street art and so the day turned into a lesson for the kids on street art, street artists, and how art can come in all different forms and all different places.  Ella, especially, was taken with it all. 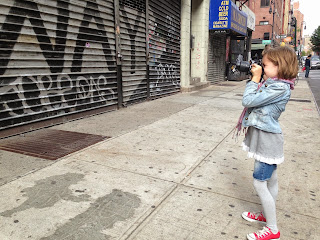 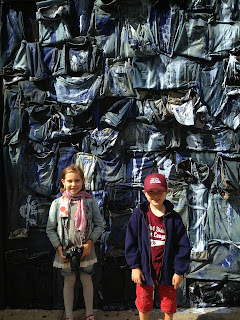 (a wall of jeans) 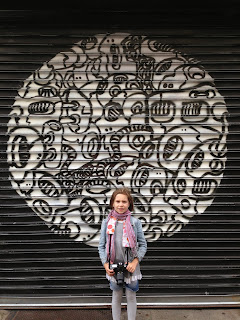 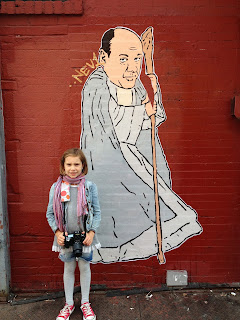 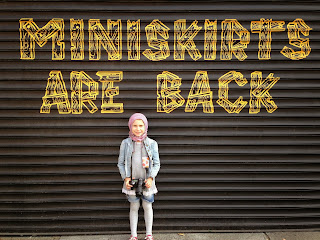 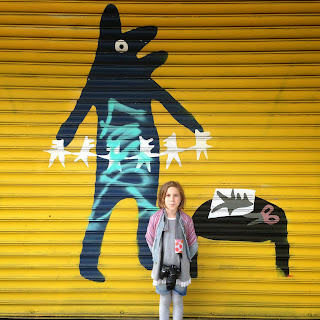 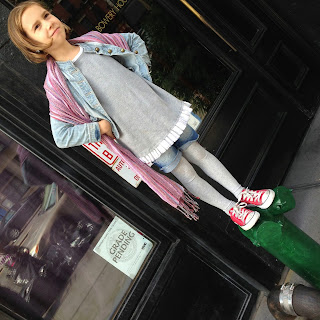 While in the area, we quickly stopped in The New Museum, to see a new exhibit by Chris Burden. 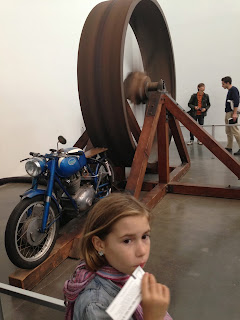 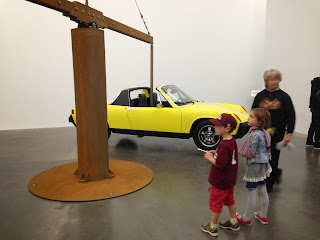 And then took the subway home after a long day of discovering our city. 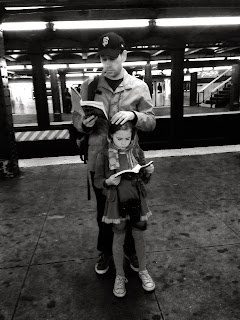 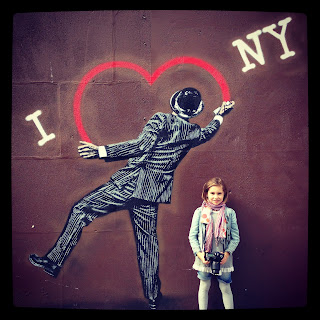