Healthy Eats in the Big Apple

Our farm box is coming to an end in a couple weeks (no year-round growing season here as in California).  But our haul each week is bigger than it's been all year long.  I'm completely overwhelmed at the amount of veggies we're getting and having a small sized refrigerator isn't helping.  I learned one trick online that's been a Godsend with all of the greens we're getting. 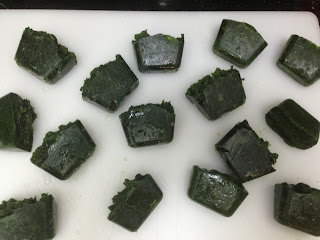 These babies are like little magic health nuggets.  I packed my blender as full as I could with greens (in this case spinach and kale) and added a bit of water.  I pureed them up and spooned it into my ice cube tray.  Once they were frozen I popped them out and put them in a Ziplock in the freezer.  Every time I make the kids a smoothie I toss one of these in there and then add whatever fruit I have (fresh or frozen) with either milk or water or juice and they get a smoothie with a big boost of nutrition.  Depending what I put in there with these cubes, the smoothie may or may not be green (blueberries hide the green, for instance).  The first time I made it for them I told them to taste it with their eyes closed.  Once they realized it was delicious even if it looked green, they never complained again.


Did I also tell you that I have a gallon size Ziplock bag that I keep in the freezer at all times?  Every time I have a piece of fruit that's about to go bad or half an eaten apple or banana left on the kids' plate, I just cut it up and pop it into the Ziplock for future smoothies.  No waste.

I've also made another loaf of no-knead bread.  It is ridiculously easy to make and tastes, so, so good.  My friend who introduced me to this technique recently discovered a yummier way to make it using Chapati flour.  He bought a 20 pound bag and offered me a pound.  I also threw in some ground flax seeds for added healthiness.  The kids and Kevin asked me to make this every week.  I just need to figure out how to halve the recipe since it made a loaf the size of our dining room table. 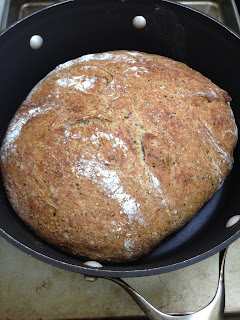 And finally, another friend shared a homemade granola bar recipe that involves NO COOKING!  I swear people, these took under 10 minutes to make and I made the mistake of cutting them up and bringing them all to the playground after pick-up.  I came home empty handed. 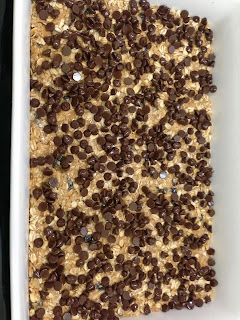 You can throw whatever you want in these but mine included raisins, slivered almonds, flax and chia seeds and then topped with vegan carob chips (totally taste just like chocolate on these).  No one but me knew how healthy they were and a good pick-me-up at the end of a long school day.