Spontaneity in the City

We had what is my favorite kind of weekend: the kind where you have no plans and so you can be spontaneous and let good things happen.

On Saturday morning when I woke up Ella was already in the kitchen making us all breakfast, so I snuck downstairs to crawl into bed with Holden.  He was already awake and reading the mini magazine that came with this month's Kiwi Crate. 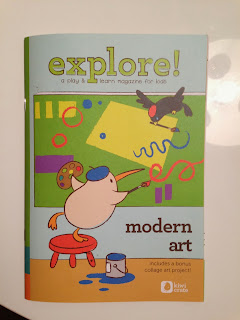 Those are the monthly boxes we get filled with craft projects for the kids.  This month's focus was on modern art and the kids made a Calderesque mobile and this Mondrian painting: 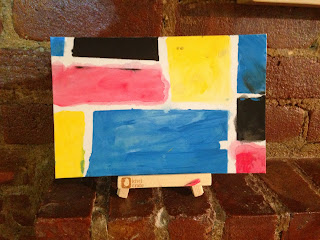 Holden was excitedly reading to me from the magazine about how Jackson Pollock painted on the floor by throwing paint at the canvas and about the difference between pointillism, abstract, cubism and pop art.  We decided to see if we could find a video on YouTube of Pollock actually painting and over breakfast the four of us ended up watching this documentary on Jackson Pollock (it's only an hour and really good - I recommend watching it).  When I told Holden that there are Jackson Pollock paintings, as well as the very paintings his magazine gave as examples of the other types of modern art, just 20 minutes away from us at the Museum of Modern Art, he decided we needed to go see them right away.

Ella and Kevin went to her soccer game while Holden and I went to a parent-child yoga class, then the four of us met up and headed to midtown to see the paintings in person. 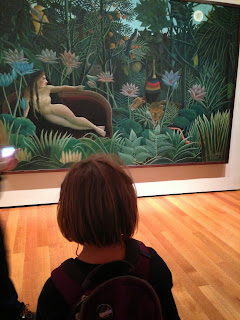 Ella's favorite, The Dream by Rousseau.

The MoMA gives out headsets for free and they have a wonderful kids tour on there which chooses several paintings and has a child-friendly narration and even will play the music that the artist liked to listen to when they painted.  It really made the visit come alive for them. 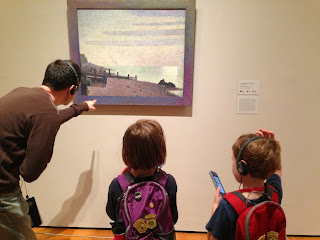 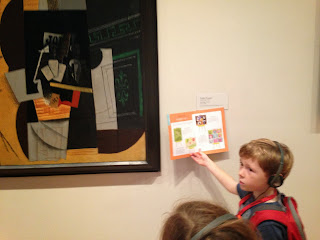 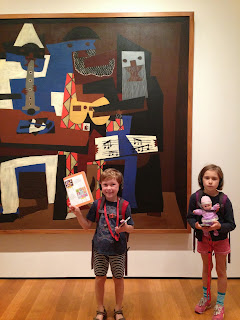 We even found the exact example the magazine gave for cubism, this Picasso. 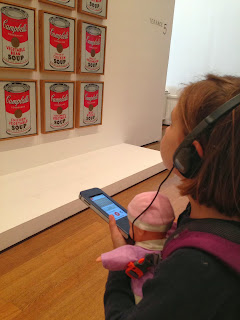 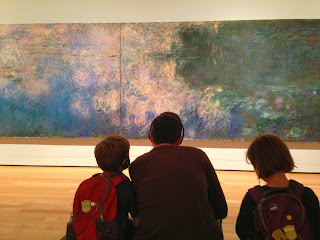 Impressionism.  Not in our magazine but the audio for this Monet was very relaxing so we stayed here a while.

And we finally ended up at the Jackson Pollock gallery.  The kids spontaneously sat on the ground and took our their sketchbooks and pencils and started creating.  I kid you not, several museum goers were taking pictures of our kids drawing on the floor in front of the Pollock painting. 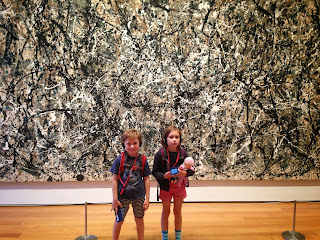 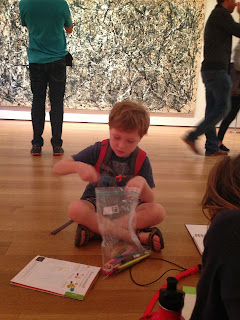 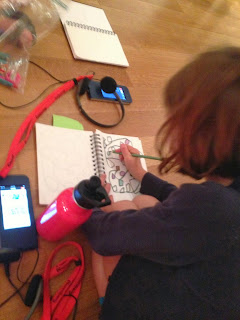 The next morning we again split up while Kevin took Holden to T-ball and Ella and I had some much needed one-on-one time (at Starbucks, of course).  Originally I had planned for both kids to take their sports at the same time on Saturday mornings so that sports didn't take over our weekends and we could still have one entire day each weekend free.  And I was disappointed when they changed Holden's Little League to Sunday mornings, meaning that now both weekend days were half taken over by sports.  Ugh.  But, it's turned out to work out perfectly.  On Saturday morning Kevin and Ella had some good Daddy/Ella time.  Before soccer they went to the book store to get a book on Greek Myths and ended up reading it aloud together at a secret garden that we discovered a couple weeks ago on the way to soccer (we're discovering a lot of these hidden gems in Manhattan).  As I mentioned, Holden and I had a nice morning at yoga together.  Then on Sunday, Kevin and Holden got to bond over baseball while Ella and I had a really great conversation over coffee and hot chocolate.  The result was that the kids were SO much better behaved all weekend long.  Getting a chunk of individual attention led to almost no fighting with each other or fighting for our attention.  Our scattered schedule has worked out much better than I could have planned.

After T-ball, the four of us met up at a newly renovated playground on the Harlem side (north side) of Central Park.  It's an absolutely gorgeous playground that rivals even the best playground I've seen in San Francisco and it's just one subway stop away. 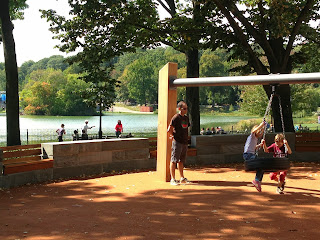 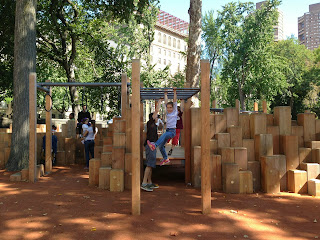 It turns out the playground is right next to the Harlem Meer (Dutch word for lake) which offers the use of free fishing poles and bait for catch and release fishing. 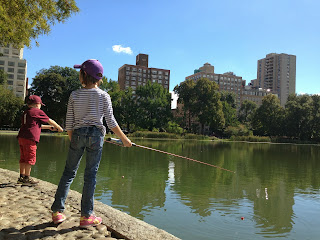 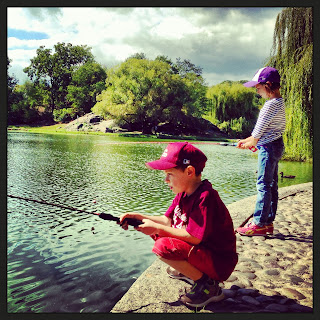 I'll bet you never knew Harlem was this beautiful.

From there we walked along the north side of the park and then down the east side.  We stumbled upon the Central Park Conservatory Garden, a beautiful, huge secret garden (at least to us) that is divided into three parts: Italian, French and English.  It is set away from the street and is designated a quiet zone, so from the street you'd never know it was there.  The kids thought it was like discovering a magic land. 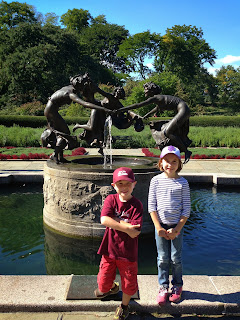 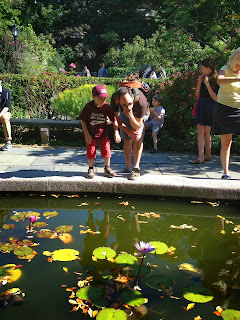 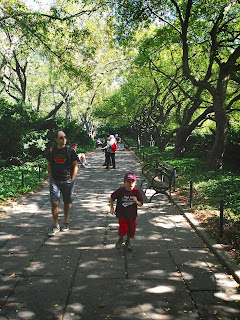 We continued wandering down the Upper East Side and ended up at the Metropolitan Museum of Art.  Since we have a membership, we decided to pop in to see another Jackson Pollock painting as well as to see if we could find anything about Cleopatra, whom Ella has decided to be for Halloween. 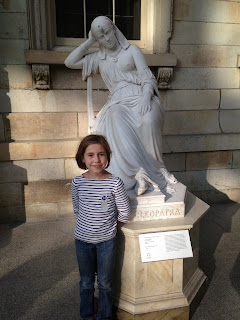 This was the only reference to Cleopatra we could find: an American sculpture of her.  I told Ella she better make sure to keep her dress up on Halloween. 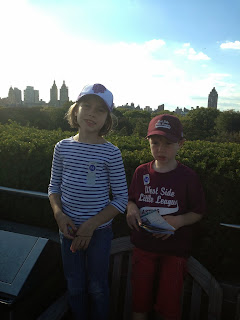 The view from the roof of the Met. 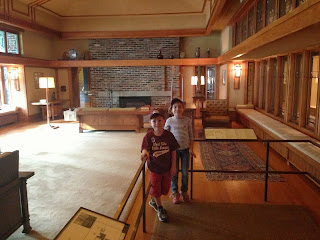 The weekend ended with Family Movie Night watching the final Star Wars.  With nothing planned ahead of time but soccer and T-ball, it could not have turned out to be a more perfect weekend.