There's a cooking blog that I've been following for the last year or so, Smitten Kitchen.  I started reading it before I had any idea that we were moving to NYC.  The author lives and cooks here in the city and in the 'about' section of her blog she says that her kitchen is a mere 42 square feet.  I've always been amazed at what she can produce in such a small kitchen. 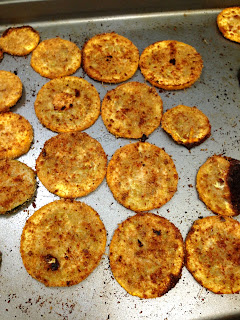 So today as I was preparing her Zucchini Parmesan Crisps, I thought, "I wonder how small my kitchen is."  I pulled out the measuring tape and, wait for it...

Yep.  It's six feet long and six feet wide, but then cut in half on the diagonal. 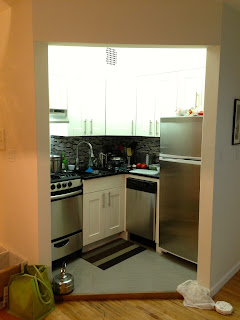 I figure it's lucky that I already loved cooking before moving into this apartment because it would be hard to learn to love to cook in such a small place.  It feels very much like camping cooking.  Actually, it's become a big puzzle most of the time.  The old adage of "clean as you go" is never more true than when you have such a tiny kitchen.  And I've been known to set prepped ingredients on the living room coffee table as I finish preparing other ingredients.  As you may or may not notice there are no drawers in this kitchen so every time I need a utensil I have to go to the sideboard in the living room.  It's also lucky that I'm so tall because we had to hang the knife holder overhead since the walls of the entire kitchen are tile. 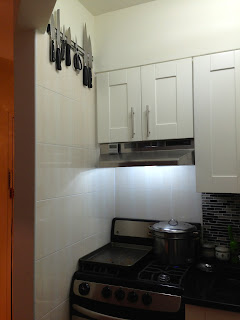 When you cook in a tiny kitchen in a tiny apartment, just turning on the oven to preheat to anything higher than 400 degrees will set off the smoke detector...even if the oven is empty. 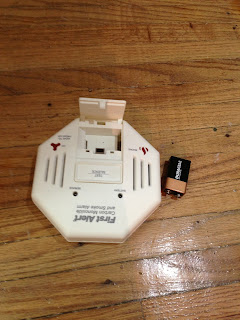 The Zucchini Parmesan Crisps were to-die-for yummy.  They even got small thumbs up from the small people in this apartment.  They also used up a couple zucchinis from our huge farm box this week.

I also made this Quinoa with Tomatoes, Green Beans and Basil but threw in some corn and roasted bell peppers and eggplants.  All ingredients except the quinoa and feta were from the box.

So, the cooking continues, micro-kitchen and all.  Now if the kids would just start school again so I could do some sewing...
Posted by Gretchen at 11:51 AM