Time for a Rain Dance

Many of you have asked about my mom and her house so I thought I'd do a brief post on the Rim Fire that is raging in the Sierras. 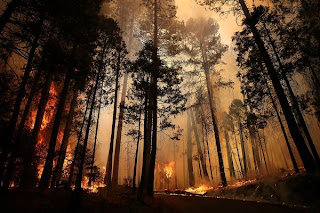 In the midst of packing the last several days, I have been closely watching the progress of the enormous fire that is burning California right now.  It is an area that is near and dear to my heart because not only have I camped and hiked at probably dozens of places around there, my mom has called the Sierras, and more specifically a small town called Twain Harte, home for the last 20 years.

She's had her car packed for the last couple days and was on the first level of evacuation notice which is to have a plan and be packed.  She had firefighters come walk her property and ask her where all of her water sources are, should they need them.  They've shut down her town to anyone who isn't a resident and have roadblocks set up to check IDs.  Mom says it's surreal.

The fire is about 5 miles from her house but that isn't as bad as it sounds because in those 5 miles are two deep canyons.  The fire has already consumed a favorite camping spot, Berkeley Tuolomne Family Camp, and I suspect that Camp Mather where we've attended the Strawberry Music Festival for the last 7 years is probably at least heavily damaged, if not destroyed as well.  Luckily, most of the fire (which is larger than the city of Chicago now) is in the wilderness although it is fast approaching what they are calling the 108 corridor, the area along Highway 108 that is dotted with small towns such as Twain Harte.  All of those small towns are filled with houses and cabins.

I just talked to my mom and she and her dog are leaving today, not because she is worried about the fire getting too close but because it's finally getting too hard to breathe.  The air quality is terrible and getting worse as they are starting to set backfires along the ridge behind her house to fight off the wildfire.  So she is safe.  And she has a car filled with photos and paperwork and even Ella's first doll.

It got me to thinking, how hard would it be to pack that car?  To decide what few possessions to take with you?