This was our first weekend in weeks (months?) that we have had a wide open schedule.  Nothing at all on the calendar.  And it felt so good.  Now mind you, we still packed it full of fun stuff, no laying around on the couch for us.  But it still was a nice feeling to wake up each morning with nothing hanging over our heads to do and nowhere to be.  It was also very good to have time with just the four of us.  Again, something we haven't had in a long time. 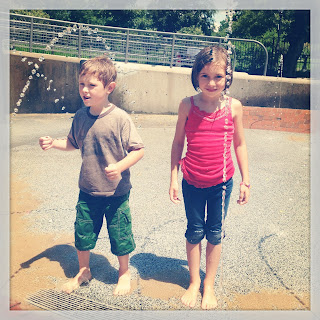 Cooling off in Central Park

As I mentioned, the kids have been in Spanish summer camp.  Each week they learn about one or two new Spanish speaking countries.  Last week it was Guatemala and Nicaragua.  They made masks and other arts and crafts and learned songs related to the area.  On Friday they had the parents come to pick up a half hour early so the kids could show us what they learned and what they made.

The teacher asked for a volunteer to tell the group of parents assembled how they made the volcanoes that were displayed.  I'm not sure if I'm more proud of the fact that my shy daughter raised her hand immediately and was excited to speak in front of a room full of adults or the fact that she did it all in Spanish.  Either way, I was bursting.

Due to the ridiculous amount of money Kevin and I have had to part with recently with the new apartment and all (more on that soon), we are making it a game to try to find as many cool FREE things to do in New York as possible.  It's not a hard task.  There is a ton to do for free in this city.  On Saturday we checked out Summer Streets, an annual event in NYC where they close down 7 miles of the city streets to traffic so that residents and visitors can walk, run, bike or just hang out in the street.  This year it was along Park Avenue. 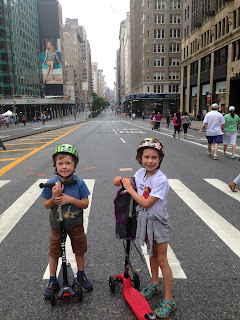 The kids brought their scooters along. 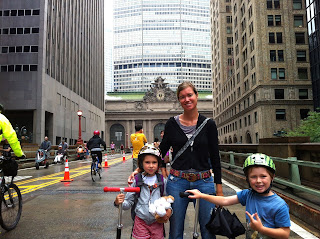 Grand Central Station in the background. 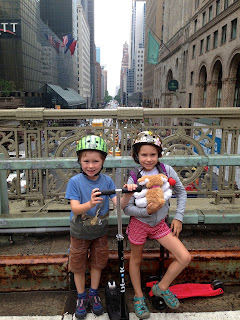 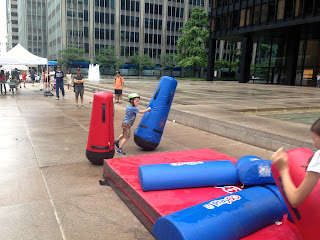 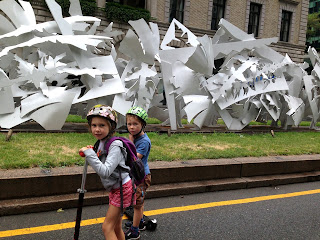 We noticed a lot of sculptures and art work along the medians that we had never noticed before. 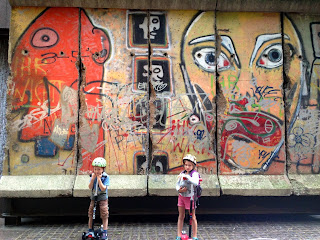 And even ran into a section of the Berlin Wall.  Who knew? 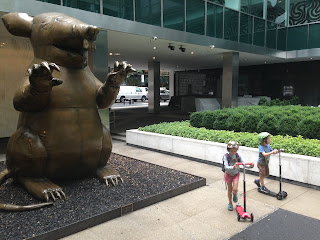 The best part was that they closed down the Park Avenue tunnel to traffic for the first time ever and an artist from Mexico created a light and sound art installation inside called Voice Tunnel that was amazing.  He set up lights all along the walls that spread up and down the tunnel at random intervals.  Then there were speakers all over the tunnel that broadcast voices recorded by pedestrians walking through. 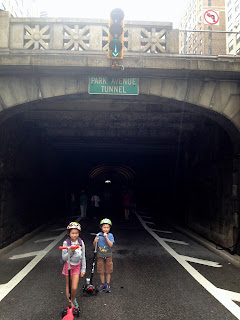 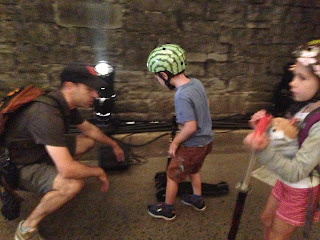 A light and speaker.  Kevin explaining to the kids how this works. 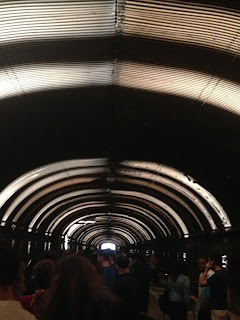 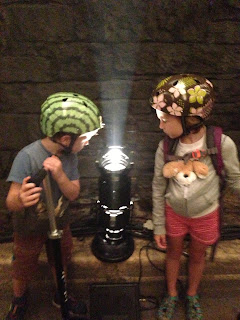 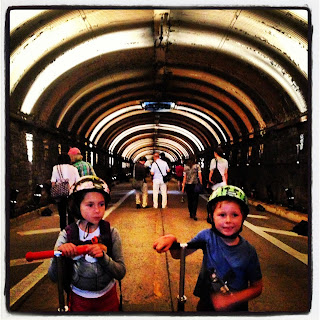 In the afternoon my friend Leslie who is in town visiting stopped by our apartment with her family so that the kids could see each other.  The adults enjoyed a bottle of Champagne on the roof top while the kids played. 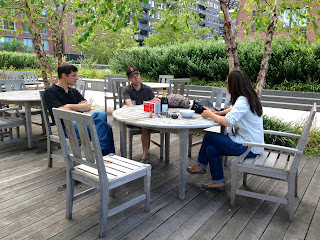 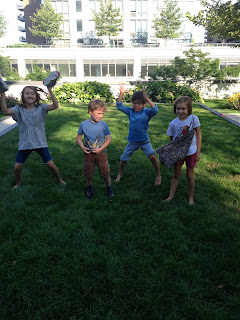 On Sunday we slept in (which for us is only 8am, but still nice) and had a quiet morning.  In accordance with our new austerity plan, we headed down to the National Museum of the American Indian which is always free.  A mom-friend told me about it because she said it's housed in a beautiful old building, the original Customs House.  Just like most museums in New York City, they make an effort to really engage children.  They had some trading cards at the front with photos of various pieces of art and artifacts that can be found in the museum with a simple description of them on the back.  So it made a sort of scavenger hunt for the kids, which they loved.  Instead of being overwhelmed by all of the pieces in the museum, they could focus on finding a dozen or so and leaning about those.  Amazingly, Holden said it was his favorite museum after we were finished and they learned a thing or two about American Indians. 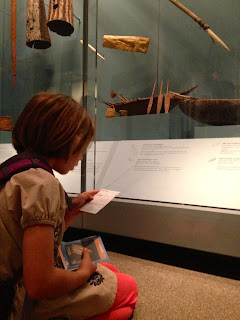 On the walk from the subway to the museum we inadvertently had another history lesson for the kids.  We emerged on Wall Street and walked by the site where George Washington was inaugurated as the first president of the United States.  They learned that not all presidents worked in Washington DC.  Then we walked past the New York Stock Exchange and Kevin did his best to make stocks understandable to 6 and 7 year-olds. 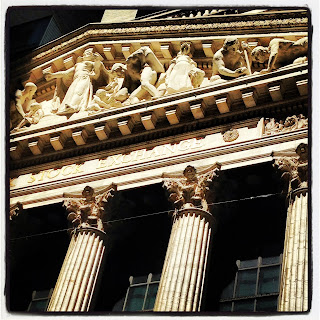 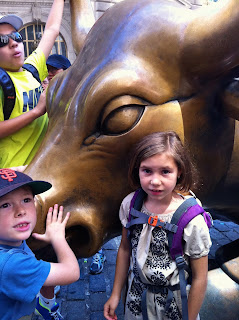 We even got to see the oldest building in New York, The Fraunces Tavern.  We agreed to return to eat there someday when we're past our belt-tightening.

Ella said her favorite part of the day was visiting the oldest church in New York, Trinity Church, built in 1698!  With Sunday mass going on, it was really pretty spectacular.  And Holden loved the gravestones in the adjoining cemetery, many dating back to the 1600s. 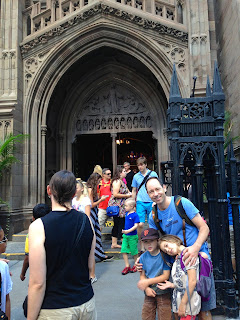 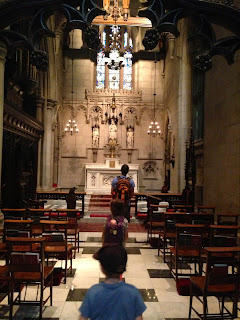 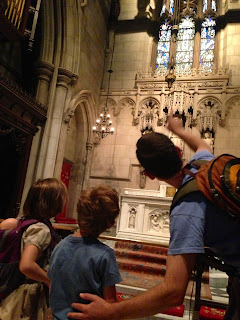 As always, I leave the religious education to Kevin. 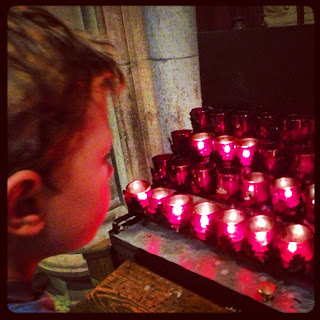 This is what I love about New York.  We were headed for the museum and on the way got to give the kids a surprise history lesson and see things and places that people from far and wide come here to see.  And all because that's where we happened to get off the subway.

And some things that made me laugh this weekend: 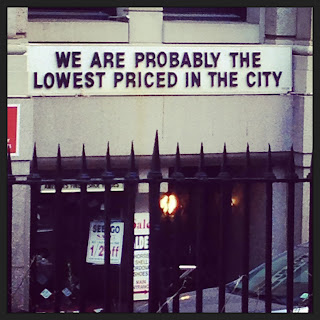 I think they're suffering from under-confidence. 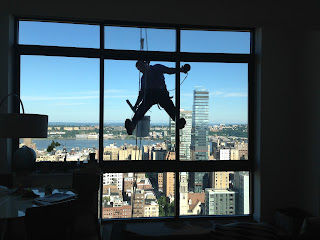 We woke up to this guy on Sunday morning.  Remember, we're 31 floors up.  Would you do this job?

Hope you all had as good a weekend as we did! 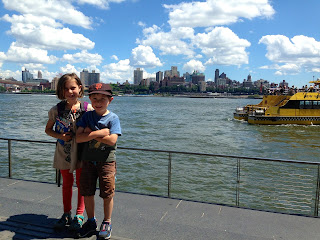