A backyard? In Manhattan?!?

Well now it's a full blown record - three posts in three days.  I've been holding off on posting this until we actually had keys in hand and the lease signed by the landlord.  And guess what?  We finally do!  So here you go:

I'm going to erase from my mind the stress of the last few months since we found out our current landlords were raising our rent almost $1,000 a month.

I'll forget the sleepless nights wondering if we'd find a decent two-bedroom apartment in New York City for somewhere near what our tenant in California is paying us for our four-bedroom house.

And I'll forget the last two weeks of racing through the Upper West Side with a broker to see apartment after apartment, all too small, too dark, too far or too expensive.

I won't even remember losing out on two apartments that we submitted applications for because of greedy brokers fighting over commissions or eager tenants willing to pay more than we were.

And I certainly will delete from my brain the stomach turning ransom brokers fee we had to pay the agent for kindly unlocking the apartment doors for us.  Seriously people, it's almost TWO MONTHS RENT.

Instead I'm going to focus on our adorable (read: tiny) garden apartment on a sweet tree-lined block filled with Brownstones built in the 1870s.  You read that right, garden apartment.  We have a backyard! 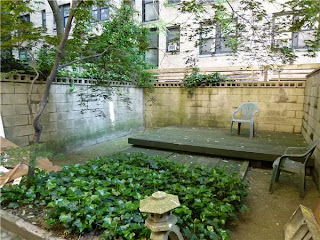 It needs some TLC, but we're good at that.  That's a maple tree and some wooden decking.  The first thing we'll do is rip out that ivy - great hiding spot for New York City rats.

Now, even though it's a larger 1100 square feet, compared to our current 800 square feet, it certainly doesn't feel bigger.  There aren't the floor to ceiling windows that we currently have to exaggerate the space.  In New York, a "queen bedroom" means that a queen-sized mattress fits in it. 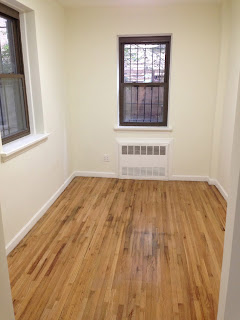 OK, stop laughing.  Or pick your jaw up off the floor.  This is a real bedroom in New York.  We'll just have to get creative.

Or don't stop laughing because this is the kitchen. 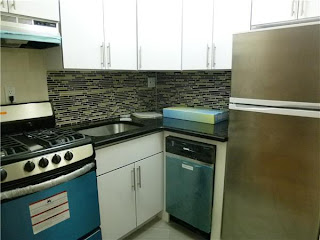 It looks nice and all brand new, right?  Well, it is.  But once we move in I'll have to take a picture of it with someone actually in it to give you some perspective.  I'm pretty sure I can touch both walls while standing in it.  As my mom would say, it's a one butt kitchen.

Besides the backyard, the kids' favorite part of the apartment is that the entire dungeon downstairs is theirs.  This is what they call in New York, a duplex, meaning it has two levels.  From the living room you go downstairs to a finished basement which has a bathroom for the kids and a small storage area/closet (advertised euphemistically as a den/office). 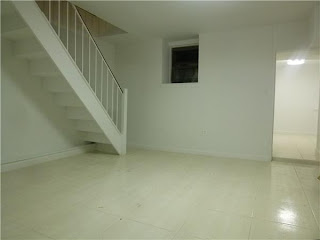 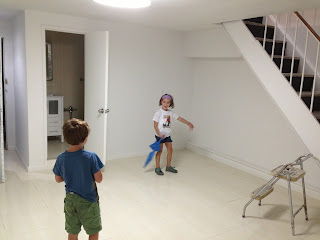 It is windowless, which is creepy to me but the kids love it.  As you can see, it still has plenty of unnatural light.  And the open door to the left of Holden in the photo above leads to the washer/dryer which is shared by everyone in the Brownstone - about 9 apartments, but the other apartments have to pay $20/month for access to it while we get it for free since our apartment leads directly to it.  The others have to access it from a door on the other side which is locked and requires a paid card to enter.  So I'm hoping most of them just send their laundry out, as many New Yorkers do.

And Kevin loves the brick wall in the living room.  I'm not a brick fan but Kevin loves that the apartment feels much more "New York" than our current, modern highrise which feels more like a nice hotel. 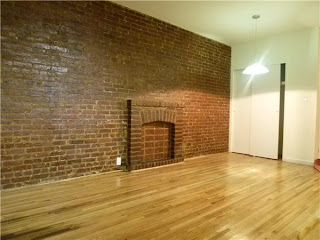 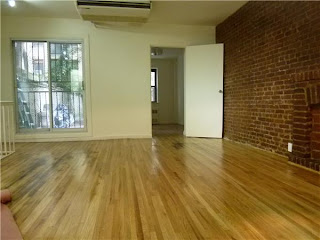 Originally, I told the broker that we wouldn't go below 90th Street.  The kids' school is on 97th and I still want to be within walking distance.  I can't imagine having to cram the kids onto a New York City subway at 8am during rush hour.  Well, this is on 87th.  At first I was a little worried about the extra distance.  Then I realized that it's still just a 10 minute walk.  So I decided to measure the distance from the new apartment to the kids' school on Google Maps.  I was shocked that it's still only 0.6 miles!  And for fun, I decided to see what a 0.6 mile walk from our old house in San Mateo would feel like.  So I plotted that on Google Maps too.  And I was shocked to see that our walk from our house to our rec center (a walk we did all the time, especially when Ella was in preschool there) is also exactly 0.6 miles!  It's crazy how your perspective can change so much.  In New York, a 0.6 mile walk will take you by dozens of restaurants and shops, hundreds of apartments, a dozen or so intersections.  In the suburbs of San Mateo, it just takes you down a few tree-lined blocks with 10 or so houses on each block.  It feels so much shorter.  Plus, in that short distance, Manhattan has three different elementary school zones, each with at least 500 children.

Being on 87th Street also takes us right to the heart of the Upper West Side.  For those of you from San Francisco, it's as close to Noe Valley as New York gets.  Lots of strollers and children's stores.  And so many amazing looking restaurants and cafes.  We're really excited to be down a little lower from where we are.  I will miss living upstairs from Whole Foods though :) 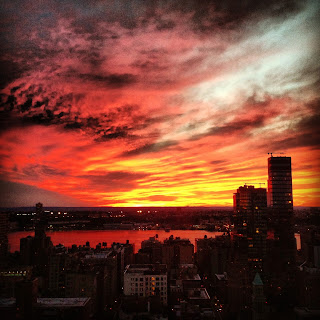 And we'll all miss the view from our couch.