Well, we tried to have a lazy week but it never seems to turn out that way.

After recovering from our red-eye we hit the road in search of a new apartment.  I dragged the kids up and down the Upper West Side.  The first day we did it alone, hitting three apartments of greatly varying quality.  We found one we liked in a Brownstone on a sweet, tree-lined street and had Kevin check it out on his way home.  The kids liked that one because it had two TINY bedrooms (in addition to the master bedroom).  Ella thought it would be nice to have her own room.  Holden wasn't so sure.  Anyway, we did submit an application but were turned down because someone else was willing to move in right away (we're hoping for a mid-month lease start).  Sigh.

The next day we broke down and let a broker show us around.  I say broke down because most apartments here are only available through a broker and brokers steal charge 15% of the annual rent (or about a month and half's rent) if you sign a lease through them.  That's thousands of dollars, people.  Amazingly, the first apartment we saw seemed pretty good - not perfect but great location and get this...a huge backyard!  OK, all concrete, but still, you could fit a table and chairs, BBQ, planters... After much drama which included competing brokers fighting over our commission, we're still not sure if we're going to be able to get the apartment.  Sigh.

I don't think I'm cut out for the cut-throat nature of apartment hunting in New York City.

On the brighter side, we had a few visitors this week from California.  New York really is the crossroads of the world.

On Tuesday night Kevin met our good buddy Nate (who was here for business) for cocktails on a roof top in Chelsea.  Luckily, I had caught up with Nate in San Francisco already this month so I stayed home with the kids and indulged my jet lag by going to bed at 8pm. 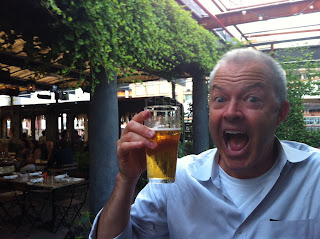 And then on Wednesday night our friends Jay and Greta left their three boys with her brother (who they were visiting in NYC) and met up with us at our new favorite hang out, Jacob's Pickles. 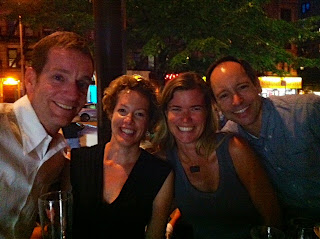 It looks like we all just stepped out of a tanning salon.

It's hard to stay homesick for long when you have a steady stream of friends from home coming through the city.