The Quiet Before the Chaos

We finally had a relatively quiet, uneventful weekend.  The quiet before the chaos.  For the next three weekends in a row we have company coming to stay with us in our micro-apartment.  We're thrilled to see each and every one of them, but we're getting a little nervous about logistics.  We can't even all eat together.  But I know it will all work out and we're so happy to have visitors.

So this weekend we laid low and took it easy.  Friday night Kevin and I saw Comedy of Errors in Central Park, which was amazing.  There were a ton of huge actors in it - most big on Broadway so probably not names that you would recognize but two big TV stars: Jesse Tyler Ferguson from Modern Family and Hamish Linklater from The New Adventures of the Old Christine.  It was hilarious and so much better than we even expected it to be.  We picnicked in the park for dinner beforehand and after sunset the weather was still in the 70s, so a perfect evening. 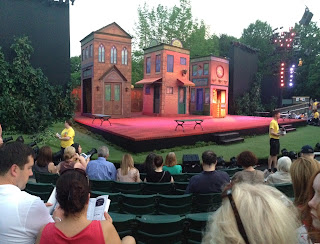 Last week I was chatting with my new mom-friend from the kids' Spanish class.

Her: You're so awesome, we should double date sometime.  (OK, I added the awesome part.)

Me:  Sounds great!  But it would have to be this weekend because after that we have house guests for the following 3 weekends and then we're in Minnesota/California for the next 3 weeks, then camping, then the Jersey Shore...our next available weekend is August 24th.

Her: This weekend it is.

It turns out she had her son signed up for a Lego robot building class (I know, only in New York) for 3 hours on Saturday morning and asked if we'd like to go out to brunch with them.  After twisting Ella's arm (Mommy and Daddy want to make new friends so you have to go to Lego class!), I signed them up for the Lego class too and we had a great brunch with our new friends.  We discovered we have lots in common and didn't run out of things to talk about the entire three hours.  I hope they still remember us in late August. 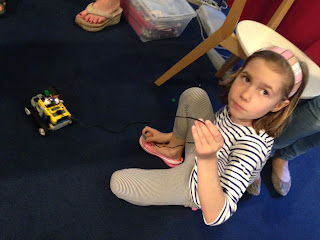 And guess what?  Ella had a great time building this remote control car. 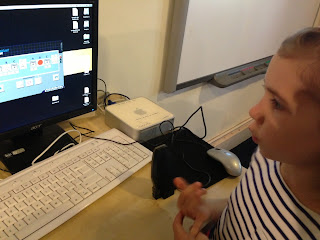 She said the best part was learning how to program it from the computer.  Kevin and I sighed with relief.  Not only that Ella loved the class, but that she loves computer programming!  Needless to say, Holden loved it, too, although he was much more interested in the building part than the programming part.

We spent the afternoon cooling off in the air conditioned Natural History Museum.  This is now our fifth visit and believe it or not, we found two more halls we hadn't been to before.  It's like the Winchester Mystery House - it never ends.  The great thing about having a membership there is that we can just pop in like we did on Saturday, wander through a couple rooms, and head home.  No pressure to see it all or make it a big event.  This weekend the kids learned a lot about our ancient ancestors. 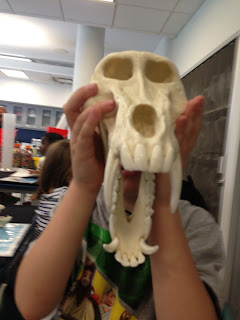 Sunday continued to be just as hot and humid.  We started off with a nice picnic in front of what has become the kids' favorite playground in Central Park.  All playgrounds in New York City have water play features and this is the first weekend where they're all turned on - sprinklers, sprays, fountains.  The kids are in heaven. 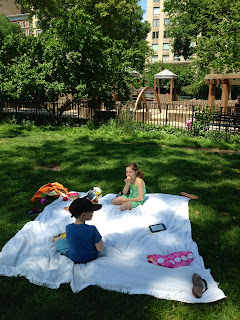 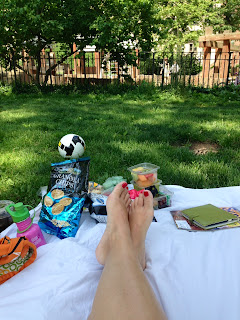 But even the water play and shade couldn't cool us down from the afternoon heat so we packed up and headed out to more air conditioning: our first movie in New York.  We saw Epic which while it has a terrible title, is a beautifully animated movie and a good story.  I highly recommend it to my mom friends.

And of course the entire weekend was peppered with many visits to the pool, before heading out, as soon as we arrived home, before dinner, after dinner.  It sure is convenient to have a pool in the building. 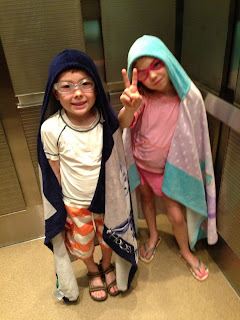 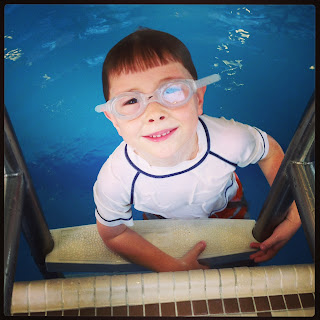 Now that I write it all out, it doesn't sound like a quiet weekend, does it?  But it felt relaxing to us and Team Skaggs is ready for the arrival of friends and family!