Still do. Always will.

Friday was our tenth wedding anniversary.  In some ways it seems unbelievable that we've been married for ten whole years.  That sounds sooooo long.  And it makes me feel soooo old!  But in many ways it feels like yesterday.  I remember every detail of June 7th, 2003.

We had an amazingly romantic day.  Really, even if we had done nothing other than just spend an entire day together with no kids and no family or friends, just the two of us, it would have been romantic.  But add in New York City...and wow!

It was a storming day... 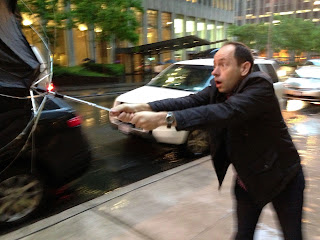 But that didn't matter.  All of our plans were indoors.  After dropping the kids off at school we headed down to the Lower East Side for a quick breakfast at a spot we've wanted to try for a while: The Clinton Street Baking Co.  We had a delicious breakfast and jetted off to our 11 o'clock spa appointments.  For Mothers Day Kevin and the kids got me a gift certificate for a 30 minute massage and two hours of tub time at the Aire Ancient Baths.  It's a gorgeous place, modeled after Roman baths.  It's all underground with brick walls and lit only with hundreds of tiny votives. 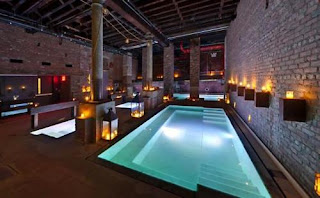 They have a 'Thousand Springs' tub with what feels like a thousand jets going.  They have a calm, 97 degree pool, a hot, hot tub and of course cold plunge tubs.  Our favorite tub was the 'Flotation Tub'.  It is extra salinated so you float very, very easily.  It's like you're just completely weightless.  There's also a sauna and a heated marble slab for naps.  It's silent in there except for the New Age music.  The massages were wonderful but of course, too short.  It was such a perfect escape from the frenetic city.  I know we'll be back.


What I love about Kevin is that when he is tasked with finding the most romantic things to do on our anniversary, he comes up with The Morgan Library.  No one loves books like this guy.  It isn't a lending library but the personal library of the Morgan family (as in J.P. Morgan, the financier).  So it's actually a museum.  And you know what, walking around hand in hand, listening to the audio tour, walking silently through the museum, was actually quite romantic. 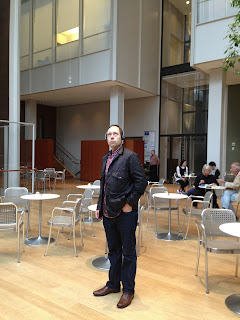 In a new addition designed by the architect Renzo Piano. 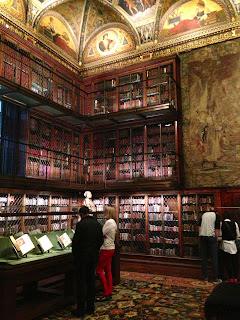 In addition to very old, rare books, such as a Gutenburg Bible and an original Catcher in the Rye (I would have taken a picture if it was on display), they also have original music sheets from Beethoven and Mozart, hand written letters from Presidents and politicians - some VERY old stuff!

After a perfect dinner at Maialino, a restaurant Kevin has wanted to try for a few years, we ended the day seeing the absolute best show I've ever seen in my life, The Book of Mormon.  No exaggeration, the best.  Now I understand all the hype.  It's hilarious.  Seriously, my cheeks were aching by the end and I had tears coming down my cheeks.  It's not for kids, that's for sure.  Some very adult humor.  The music, the singing, the story - all fantastic.  Run, don't walk, to get your tickets.

Over dinner Kevin and I agreed that if we could teach our kids one thing, it's that the most important decision you will ever make is choosing your life partner.  You get that one right and everything else is easy.

So glad I got it right.