Lots of fun stuff happened in this short week so I had better get a blog post out now so that I don't have a super long one on Monday that no one would read because it would be too long...

Remember how I said one of the very best parts of being a stay-at-home mom is getting to chaperone all of the kids' field trips?  Well, that was never more true than yesterday.

Ella's class took a boat ride around the entire island of Manhattan!  How cool is that?!?  And I'm not the only parent who thought so.  Out of a class of 21 students, we had 18 parent chaperones!  So I also got to know some more moms and dads, which is always cool. 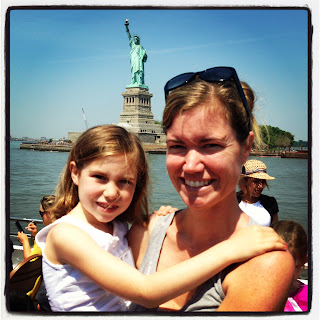 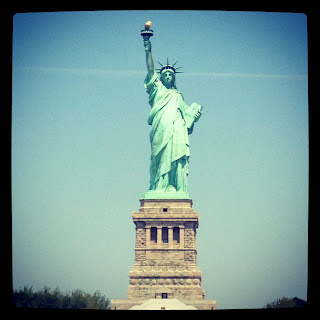 Her class was most excited to pass by Ellis Island and the Statue of Liberty since they just finished studying immigration for the last few weeks.  Both are still closed due to damage sustained during Hurricane Sandy last fall, so you can't actually stop there yet.

Grandma Terrie asked Ella to count how many bridges we passed under and I bet you'll never guess... 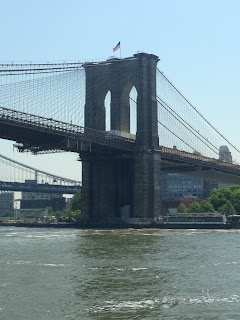 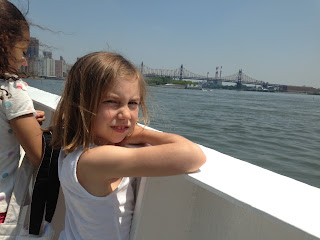 Twenty!  I had no idea there were so many bridges linking Manhattan to the rest of the world! 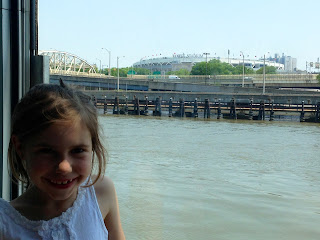 Yankee Stadium (which we'll be visiting in September when the SF Giants are playing!) 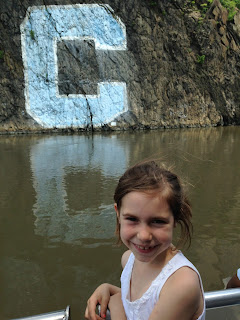 C is for Columbia - one of Kevin's alma maters

We even passed by our apartment while sailing down the Hudson.  It's the one in back, just left of center with the three large black solar panels on the top.  Now I know what all the ferries I see passing by everyday see when they look up at us. 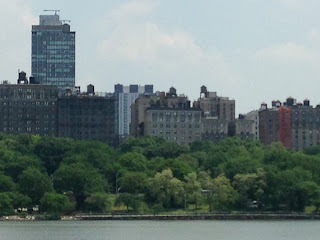 And of course we sailed around downtown Manhattan.  It may not seem like it, but to the left is the tallest building in the Western Hemisphere: One World Trade Center (although I think they cheated by putting the spire on). 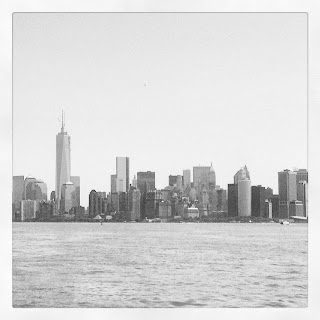 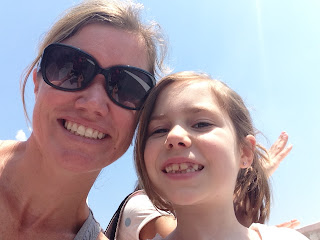 This morning I rose early and headed over to Central Park with a beach towel, a book and a large coffee.  Summertime is Shakespeare in the Park time and the tickets are free but that means waiting in line.  A long time. 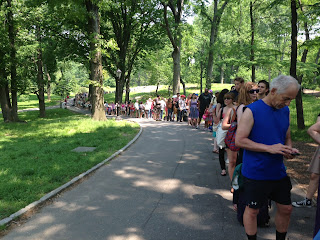 They hand out the tickets at noon but people start lining up by 5am.  I'm not that crazy but I did get there at about 7:15 and there were probably 50 people in front of me.  They're very strict about not holding spots in line for anyone.  The person getting the tickets has to be the one going and you can only get two tickets per person.  It would have been fun to take the kids but since it's in a huge outdoor amphitheater, it has to start after dark, which around here is 8:30pm.  Not that the kids would have lasted more than 15-20 minutes watching a Shakespeare play (even if Jesse Tyler Ferguson from Modern Family is staring in it).  So the babysitter arrives at 7 and Kevin and I will have a picnic dinner in the park and celebrate 9 years and 51 weeks of marriage. 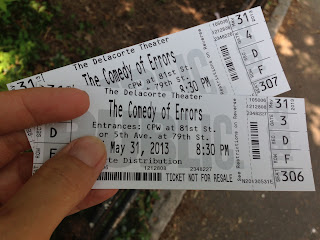 Several people have asked lately what happened with the apartment saga.  We decided to extend our lease through the end of August (at the ridiculous rent for one month), to avoid ruining our summer by having to move in the middle of July (when the kids and I will be in California).  We'll be able to enjoy the pool and roof deck for a few more months and start looking for a new (cheaper) place in June/July.  Meanwhile, we're enjoying every minute of this view. 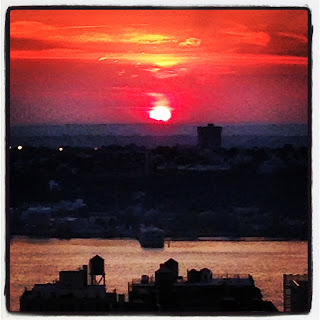