First, a big apology to the parental units who I'm sure have been checking this blog hourly for updates on our Boston trip.  Our desktop computer is ill and in the Apple hospital so I am doing my best to write this blog from Kevin's laptop (and from a cafe down the street) which isn't as easy for me, especially figuring out how to get my photos.  But I did it and I will now fill you all in on our fantastic road trip. 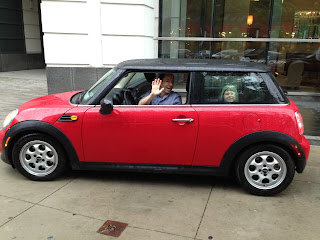 We rented Holden's favorite car - a Mini Cooper - and surprised him on Friday after school.  After Kevin picked it up and took a look in the trunk (which is the size of a glove compartment in an SUV), he had me repack everything to consolidate our goods.  The four of us and our luggage squeezed in and we set off for what is supposed to be a 3.5 to 4 hour drive, in the best of conditions...

Memorial Day weekend is the worst of conditions.

On top of which, it was storming out, so our hopes of arriving for a late dinner were dashed when we pulled up at our Boston hotel at 12:30 in the morning.  Not a great way to start our trip.

We did however, get to stop on the way in Hartford, Connecticut, the home of Auntie Maxine's alma mater, Trinity College. 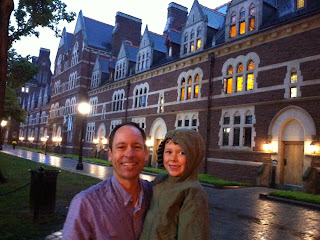 It was absolutely gorgeous and Holden thought it looked like an awesome summer camp.

The next day we set about seeing the city in our miniature car. 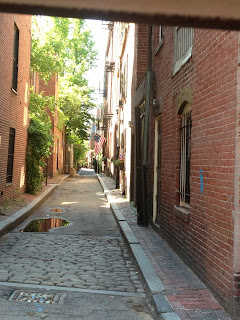 Going down tiny alleys we never could have navigated in a normal vehicle. 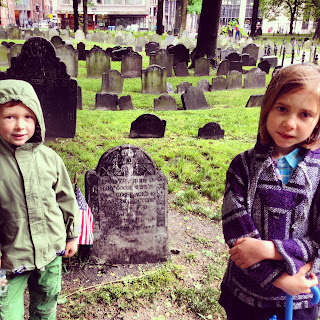 We visited an old graveyard across the street from our hotel where Samuel Adams and Mother Goose are buried. 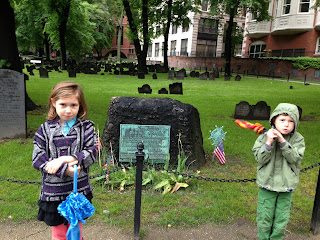 Holden's choice for the day was the New England Aquarium, which was a good choice on what turned out to be a rainy day. 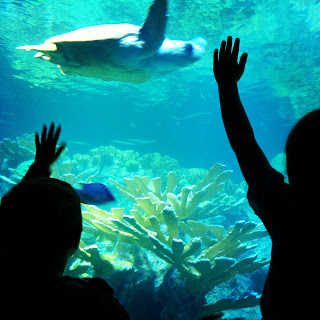 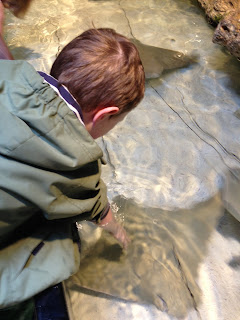 They even got to pet sting rays!

We then walked over to the Institute of Contemporary Art which as luck would have it, was having a Family Day complete with activities for the kids and free admission for families. 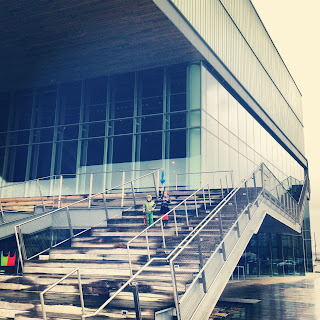 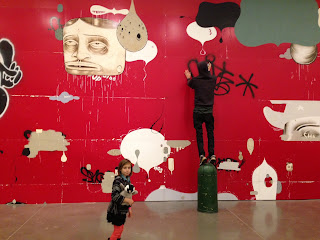 There was an exhibit of a graffiti artist from San Francisco, Barry McGee, which the kids loved!  "Spray painting on walls is art?!?" 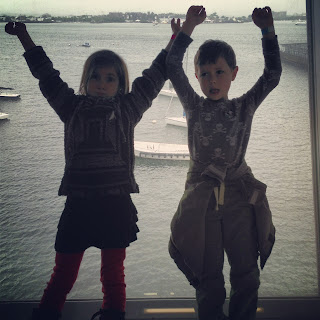 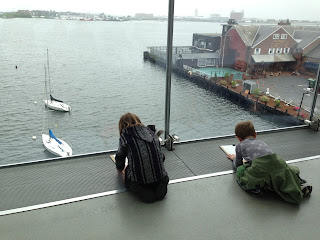 The kids drawing the harbor.

One of the main reasons we chose to come to Boston this weekend was because Kevin's cousin Tim, who has lived in Boston for 15 years, is moving back to California next week.  So this was our last chance to see him and his family in Boston.  We lucked out and happened to hit it when it was also Tim's birthday, so we got to celebrate his 41 years together. 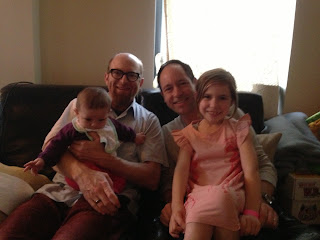 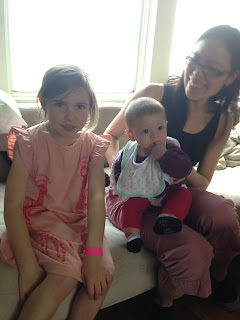 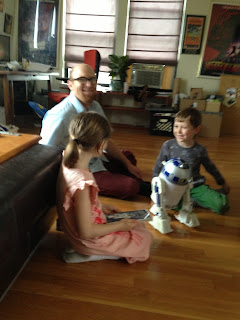 Sunday we set out early to meet up with an old college friend of Kevin's (who he hasn't seen since college), Simon and his wife Suzanne and their kids Maddie and Miles.  We met them at the Museum of Science - a combination of the Natural History Museum in NY and the Exploratorium in SF. 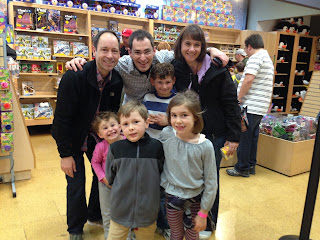 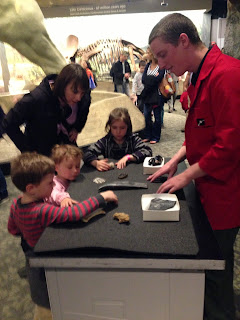 The weather was slowly improving so we headed over to the Boston Public Garden where one of the kids' favorite books, Make Way For Ducklings, takes place. 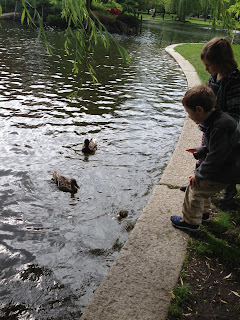 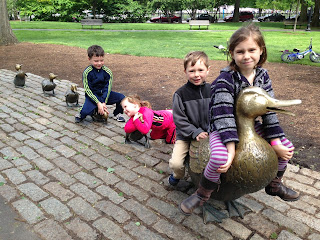 ...and the monument to the book. 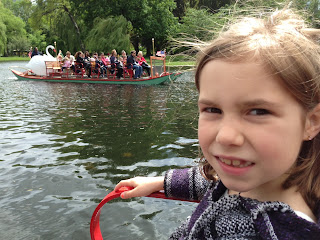 We rode the Swan boat around the lake. 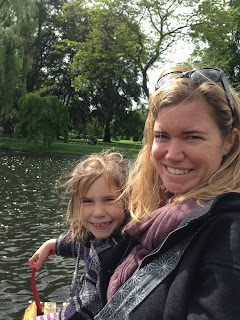 (Evidence that I was in fact on the trip.)

We saw many memorials to the recent Boston bombings.  It seemed like every shop had a Boston Strong sign in the window. 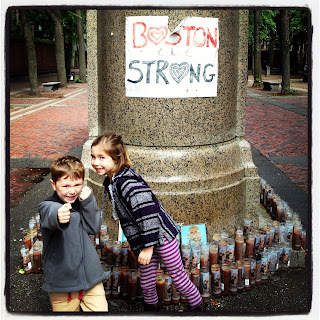 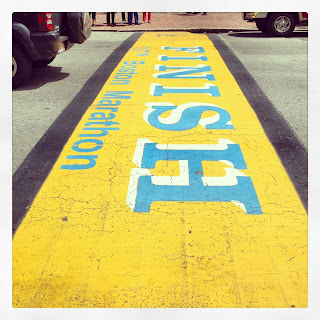 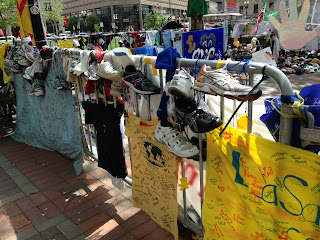 This was a large memorial filled with running shoes, signs and flowers at the site of the second bomb.

On Monday we headed across the Charles River to Cambridge.  We zipped around the campuses of MIT and Harvard.  We happened to hit the Harvard graduation and told the kids we expected to be attending another Harvard graduation in about ten to twelve years... 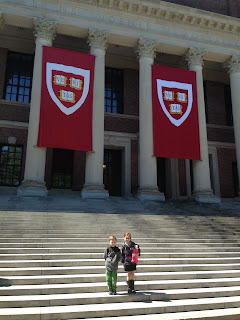 Both Boston and Cambridge are beautiful cities which I'm sure are even more gorgeous in nice weather, so we are already planning our next trip.  Also, there are just so many sites we missed and didn't have time to see.  It's not a place you can do in three days.

The drive home luckily took about half the time as the drive up.  All four of us were wiped out. 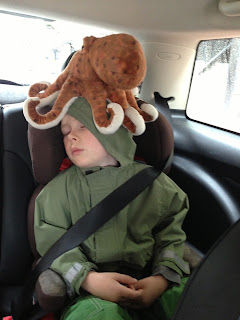 As soon as we got home we went straight up to the roof deck for our now traditional end of weekend ritual. 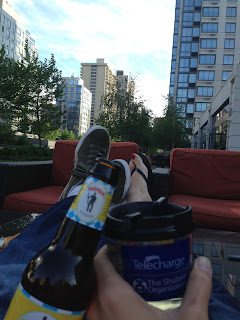