Kevin and I try to have regular "Divide and Conquer" days with the kids: one weekend day where we each take one kid and shower them with lots of one-on-one attention.  This actually benefits us more than it benefits them.  We both agree that when we are alone with one child - far, far away from their sibling - they are at their best.  We enjoy spending time with them so much that way.  They are happy, inquisitive, adventurous.  They aren't wasting any precious energy worrying if their sibling is getting more cookies, more iPad time, more attention.

What mother-daughter day would be complete without: 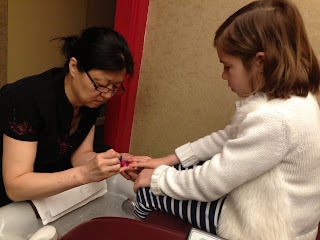 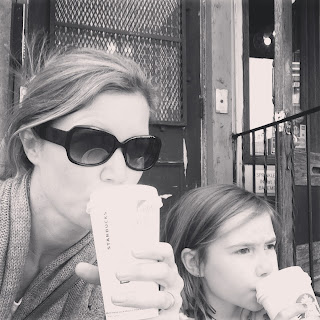 While we were relishing in being girly, the boys headed to Central Park and played baseball.  No photos of course, because I wasn't there ;)

But our little family unit can't stand to be away from each other that long so in the afternoon we met up with each other at the TriBeCa Family Festival, a street fair that is part of the world famous TriBeCa Film Festival going on right now.  It was massive and happened to be the nicest weather day since we arrived here three months ago.  There was face painting, arts & crafts for little people, music, food, even a giant castle made completely out of cardboard that the kids could crawl around in and decorate with chalks laying around.  They even had film screenings of children's movies but the weather was too beautiful for us to waste time indoors. 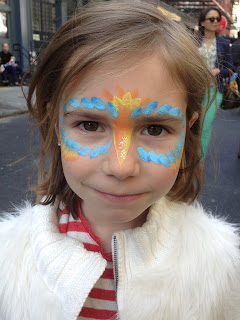 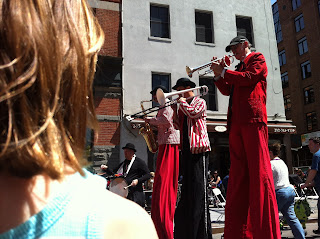 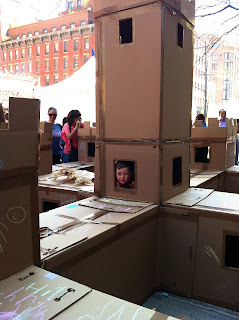 When we were finished at the festival we met up with Maeve's family for some more baseball in Central Park.  The park was crawling with city dwellers like ants to spilled honey. 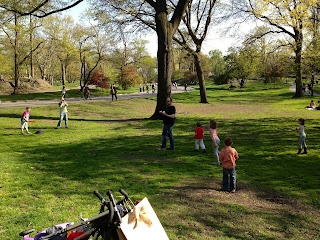 Sunday inadvertently became another Divide and Conquer day.  Holden woke up sick.  I suspected it all afternoon on Saturday but was in denial.  I couldn't deny it anymore on Sunday morning when he was hacking up a lung and then eventually vomited.  So I sent Ella and Kevin off for a daughter-daddy day while Holden slept and I sewed.
They had a great time exploring the Morningside Heights neighborhood just north of us.  They cruised around campus at Columbia University and Kevin showed Ella where his classes were and they ate lunch in the quad.  They caught part of a Shakespeare performance going on outside and did a lot of people watching. 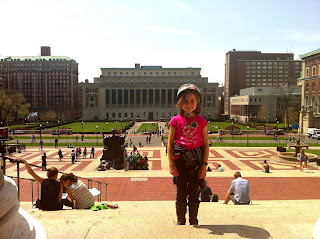 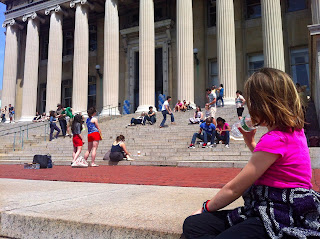 Then they stopped by St. John the Divine to see an art installation by Jane Alexander.  The church allowed this artist to place sculptures of half-human, half-beasts around the church and it's surrounding gardens. 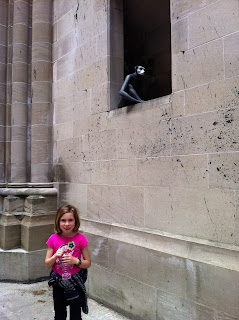 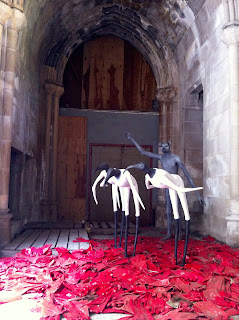 Friday night Kevin and I attended a celebration of life for an old teacher of mine.  Howie Leifer was my art teacher for about ten years at the French school.  We reconnected a few years back when he flew out to San Francisco for my 20 year high school reunion.  He grew up in Brooklyn and returned to New York in 1998, but for all of the in-between years he lived in San Francisco.  Howie was an amazing puppeteer, a free spirit, and the kindest soul you could ever meet.  About a year ago when Howie was helping his brother Neil (who is a very famous sports photographer) sort through his paperwork, he came across a letter to Neil written by a Kevin Skaggs.  Howie asked if it could possibly be my Kevin Skaggs.  It turned out that Neil had been a guest speaker at one of Kevin's journalism classes at Columbia and Kevin had dropped him a note after, that Neil still had.  After some funny emails back and forth about what a small world it is, about a week later a signed copy of one of Neil's coffee table books arrived in the mail from Howie.  He never mentioned that he was sick.

Howie is also responsible for this awesome picture of the kids.  He sent it to me after Obama was elected in 2008. 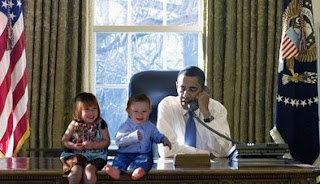 I'm happy I got to hear stories from friends and family on Friday confirming to me that Howie was one of a kind. 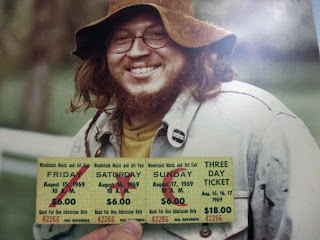 Howie at Woodstock.  How cool is that??