One of the best parts of being a stay-at-home mom is that I get to go on every single field trip.  Especially now that we're living in New York because everything is new to me.  I get to cross off a bunch of places I already had on my Places to Take the Kids list (aka, my The Big Apple with Little People Pinterest board).  And a bonus that I didn't even think of until this week is that chaperoning a field trip means meeting other chaperones, so I've had a chance to make a few new parent-friends.

Yesterday I got to go with Holden's kindergarten class to see a puppet show of Aesop's Fables.  Coincidentally, my earliest memory of going to any kind of child-centered performance was seeing a production of Aesop's Fables at San Francisco State University. 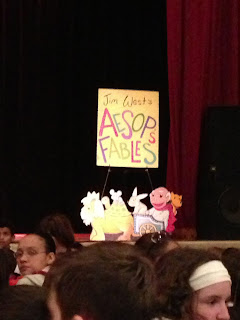 Holden was thrilled to get to ride a school bus again and frankly, the kindergarteners were much better behaved on the bus than the second graders were on Tuesday.  The show was really great and they even taught the kids how to make their own puppets. 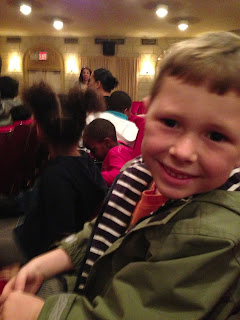 On Tuesday the kids finally got their scooters that they have been begging for for weeks.  Anyone who has spent any time in New York (outside of Times Square) knows that every small child rides a scooter around the city.  There really is so much walking required of living in the city that for the parents' sake, once a child is out of a stroller it's necessary to give the kids some wheels of their own.  Plus, the scooters can easily be brought on a subway or stashed in a taxi.  Kevin and I figure they will make our lives easier on the weekends when we want to keep going and the kids start whining and complaining about all the walking. 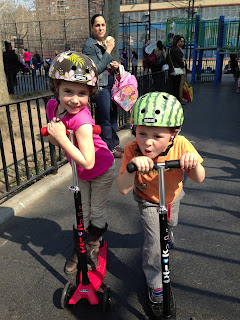 Last night the Central Park Conservancy was having a fireworks show to celebrate the arrival of spring.  I'm realizing that in a place that has such long winters, spring arriving is a BIG deal.  There's all kinds of celebrating going on.  So even though it would mean the kids would stay up past their bedtime, the plan was to meet Kevin down at 72nd Street where the show was supposed to be.  The kids rode their brand new scooters to the subway. 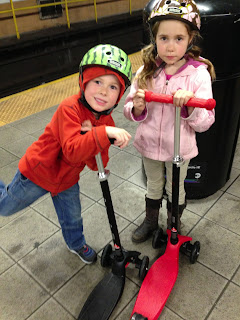 As soon as we got above ground and met up with Kevin it was like a scene out of The Wizard of Oz.  Scary, dark black clouds were coming over from the Hudson River and the winds were insane.  We could barely open our eyes and Ella and I almost got taken out by a sign falling off the scaffolding above us.  It was all we could do to hang on to the scooters.  Kevin and I made a quick executive decision to forgo the fireworks (if they were even still going to happen) and duck into a restaurant.  We had to console the crying kids who were so looking forward to the fireworks show with a giant plate of chocolate empenadas covered in mountains of whipped cream and piles of powdered sugar.  We consoled ourselves with wine, naturally.  We hopped in a taxi (scooters and all) and heard the fireworks overhead.  By this time a lightening storm had also started, so there was a somewhat divine light show going on.  Kevin asked the driver if he could take Central Park West back to our apartment (not the easiest way to go but it would give us the best view of the fireworks).  He flipped an illegal u-turn and we got a full ten minutes of the fireworks show on our drive home, looking out the back window. 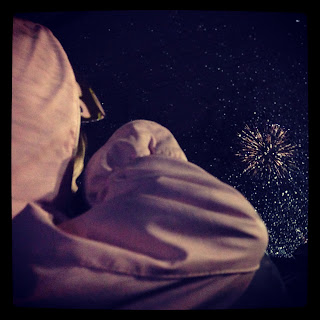 A perfect New York moment.
Posted by Gretchen at 10:40 AM