Shoving Culture Down Our Throats

It's like you can't even sneeze in New York City without it being a cultural event.

On Thursday I took a little Gretchen-adventure to check out Eataly in the Flatiron District.  Eataly is a huge Italian Gourmet mecca.  It was started by Mario Batali (or at least his name is attached to it) and it sells amazing Italian import foods, cookbooks, kitchenware, produce, baked goods, coffee, desserts - anything and everything you can think of.  It also has several mini-restaurants inside where you can sit at the counter or at a small table and eat charcuterie at one counter, try Italian wines at another or as I did, eat a bowl of Tuscan bean soup and portobello and caramelized onion on a baguette.  This place definitely kicks the Chelsea Market's ass in foodie destinations. 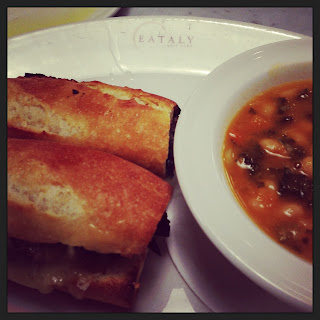 I tried wandering around the Flatiron for a while after my solo lunch but the weather was just too cold to stay above ground long.  I can tell it is a great place on a nice day and I'll return.

Then on Thursday night Casey came to watch the kids and Kevin and I got out for our first Broadway play together.  We saw Scarlett Johansson in Cat on a Hot Tin Roof.  We were a little prepared to be disappointed because Kevin read a bad review but we actually loved it.  I bought nosebleed seats off a site I found that emails me discount codes for theater tickets but when we arrived there were so many empty seats that the usher brought us down to the orchestra section and let us sit in some amazing seats up close!  I'm sure that added to our enjoyment of the show.  When you're sitting that close you forget you're in a theater and just get absorbed into the play.

I got to chaperone a fieldtrip for Ella's class on Friday although when we woke up in the morning this is what we saw out our window: 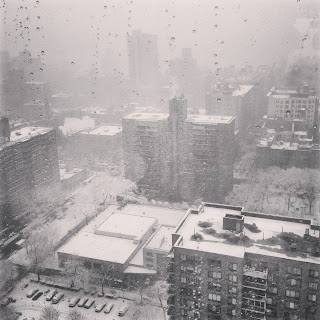 This storm was even worse than Nemo, I think.  It felt like a lot more snow.  And this was the day that I had volunteered to chaperone a field trip for Ella's class.  We walked 5 blocks in this weather to a local theater called Symphony Space where they were performing Latin American dance and music for school kids.  Here we are walking to the show: 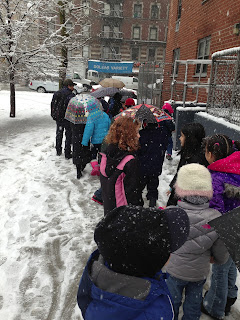 As much as I didn't enjoy walking in the snowstorm with wind and snow blowing in my face and trying to keep the kids from getting hit in the crosswalks as they threw snowballs at each other, the show was worth it.  They had a Cuban band, Capoeira dancers from Brazil, Argentinian tango dancers, Mexican Ballet Folklorico - it was really amazing.  The kids had a great time.
Friday night was our new school's auction/fundraiser so Casey came for a second night and Kevin and I had a fun night out.  The theme was Mardi Gras complete with a live cajun band.  We met some really nice parents from our school and had a great time.
We woke up Saturday to the best weather we've had in the entire 6 weeks we've been here. 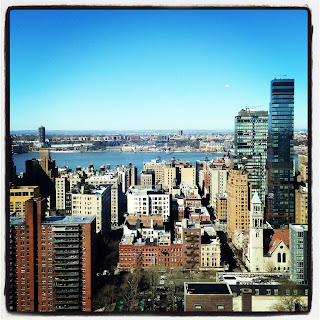 As I said on Facebook, I'm learning that New York is like a fickle girlfriend: one day she's bitterly cold and the next she's sunny and happy to see you.  It was like the population of NYC doubled over night.  The sidewalks were packed with people and everyone was in a great mood.  I got a small taste of what spring is going to be like.  A New Yorker told me that spring is even better here than California because everyone appreciates it so much more.  I can see that.
We returned to Symphony Space this time to see an Oscar nominated documentary (we got free tix from school) called Chasing Ice.  I highly recommend it.  It's about the melting glaciers but really it becomes a personal story about the man who is making the documentary.  Holden loved seeing the shots of glaciers because he still hasn't stopped talking about Alaska since our trip last summer.  He says it's his favorite place in the world :)
We had our first dinner party in our tiny apartment on Saturday night!  We hosted Maeve's family of 5 which made a total of 9 people.  We ate in two shifts since we can't all fit at our table at the same time.  I'm learning to get creative in a small space.  Her family is so great and the kids all got along and made an enormous mess while the adults talked travel and drank wine.  A good time was had by all and since the apartment is so small, it only took a fraction of the time to clean up after than it would have in San Mateo.
Sunday morning we dashed off to the Museum of Modern Art in the morning for a kids program.  They gave a tour to the kids and talked about how art tells stories and had them create some art of their own to tell their own stories.  I almost got whiplash seeing all of these famous pieces and I'm no art connoisseur.  The kids had a short attention span so I'll need to return on my own soon.  Luckily, Kevin got a membership for his birthday from his parents. 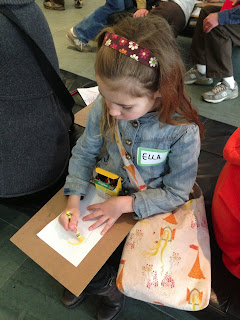 The budding artist brought her own art bag. 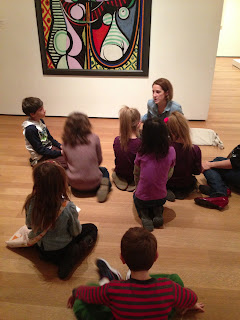 Bad photo - I should have gotten the entire Picasso in so you could see it. 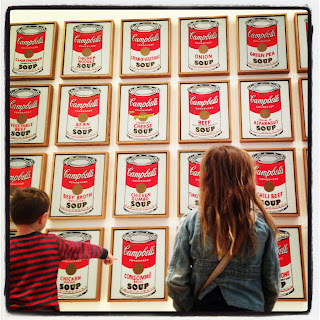 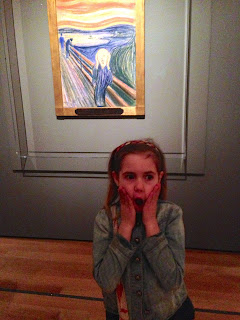 I'm sure she wasn't the first person to pose like that in front of The Scream.

And this last one was taken for their Grandma Diane who apparently loves this Picasso sculpture. 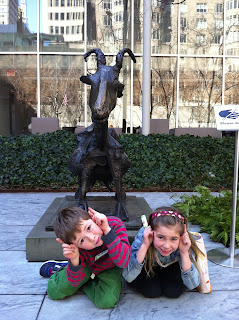 We then hopped the subway downtown to meet up for brunch with our friends Katharine and Paul which in New York is apparently an afternoon event.  As Ella said, it should be called linner.  Katharine and Paul live down by Wall Street so after "brunch" they showed us around Battery Park.  We got another view of the Statue of Liberty and had a really nice walk to a great kids' playground that is under the backdrop of the new World Trade Center.  In New York fashion we ended the day on their roof deck with a bottle of wine while the kids played on our iPhones.  It doesn't get much better.

Maybe next week I'll post what a terrible, boring week we had so that these posts don't get too annoying.  Happy Monday, y'all.