My editor has informed me that I should write shorter and more frequent update posts.  Apparently reading one blog post takes longer than his subway ride home from work.  So even though not much has happened since my last update, I'll see what I can scrounge up.

Last night Kevin met an old friend (Chris Lippi for those in the know) for dinner.  It's funny, in the month since we moved here he's seen three of his closest friends who all live in the Bay Area and he hadn't seen in months and months when we were living in California.  I've seen my friend who lives in Singapore.  New York really is the crossroads of the world.

Today was parent-teacher conference day at school and I don't want to brag but....OK, I'll brag a little.  Apparently aliens take over the kids' brains as soon as Kevin and I are no longer within earshot.  According to the reports, they become well-mannered, well-behaved, studious, smart kids.  They follow directions and raise their hands and are the apples of their teachers' eyes.  I assured their teachers that they have the wrong kids but as long as the "above grade-level" grades make it on their transcripts, I won't tell.

We will hopefully have two mini-family reunions soon.  We decided to go visit Kevin's cousin Tim and his wife Toby and their brand new baby girl in Boston over Memorial Day weekend (which as luck would have it, is also Tim's birthday weekend).  They will be moving to LA a couple weeks later so we're catching them just in time.  Plus, I've never been to Boston and am so excited to see it!  Then, a birdy tells me that our cousins Michael and Frances and their kids are trying to plan a June visit to see us.  [Bonnie - act surprised when he asks for the time off ;) ]  Our kids LOVE their kids and Michael and Frances are two of our favorite people AND the weather will be a lot better by then, so it should be a great visit and we're really looking forward to it!

Believe it or not, I haven't taken any pictures since my last post so I'll leave you with this one taken a week or so ago.  Someone's been working out... 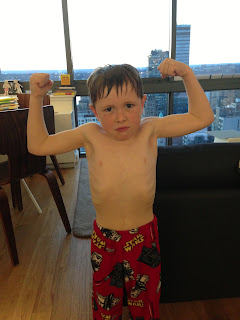