Ask and Ye Shall Receive

As though someone were reading my posts...I got not one but TWO girl talk sessions this week!

My good friend Crystal from San Mateo (who is now living in Singapore) was in town this week and we had a great lunch at Sarabeth's (which will mean nothing to you unless you're a fan of fancy jams) on Tuesday and caught up on all the things that two women who haven't seen each other in months catch up on.  It was so nice to see her and hear about her sons and husband and exotic life living in the far East.

And then like famine to feast, I got a second chance to chat the morning away on Wednesday with a brand new friend - which sometimes are the best kind because you have SO much to talk about and so much to learn about each other.  One of the moms at the kids' school in San Mateo introduced me to a good friend of hers (via email) who moved to NYC three years ago from the Bay Area.  Coincidentally, she happens to live a few blocks from me and has two boys ages 4 and 6.  Needless to say, we had a lot to talk about and really hit it off.  We have a lot in common - she grew up in Hawaii (I lived there for four years) and she and her husband did an around-the-world trip.  We were both shocked when we realized we had been chatting and eating for over two hours and still had so much to say!  So she's invited our family over for dinner tonight (Saturday) to continue the conversation.

And it was all perfect timing too, because Kevin was away in Phoenix for a conference for the first half of the week and I would have had absolutely no adult conversation otherwise.  When he left on Sunday morning I realized that I didn't know anyone else in the entire state (Maeve's family was at Disneyworld and I thought our friend Katharine who lives here was visiting her mother in Kansas City but it turns out she wasn't).  Anyway, I was especially careful crossing streets all week wondering what would happen to our kids if I got hit and couldn't pick them up from school.  I know, I know...

I ventured out of the apartment with the kids and took them on the subway by myself for the first time.  As I stood on the subway platform gripping each child's hand I realized why I could never have a third child.  I can never have more kids than I have hands.  Especially on a subway platform which makes me completely paranoid.  We made it to midtown and I bought nosebleed tickets for $15 to take the kids to see their first NYC play.  We saw Zorro (which Holden quickly taught me means fox in Spanish - did you know that?).  The kids loved it even though I think they didn't understand a lot of it.  The acting troupe was from Scotland complete with very thick accents.  But the kids loved being in a huge theater and all of the action and sword fights. 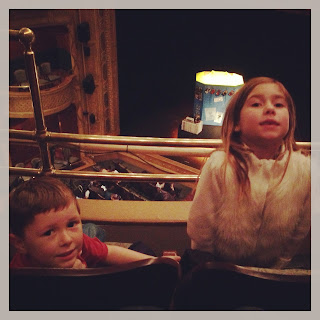 I also ventured out on my own this week and made it to the Chelsea Market.  It's supposed to be the Ferry Building of the East Coast.  The shops were all very much the same - amazing bakeries, gourmet foods, high-end coffee, seafood, meats.  The space was very cool but not at all like the Ferry Building - no windows, dark, beautiful reclaimed wood flooring, brick walls.  Very cool, but not the Ferry Building.  The best part is the Food Network is upstairs so I sat for a good hour with my cup of delicious coffee and pain au chocolat hoping to get a celebrity sighting (or at least what I would define as a celebrity), but no luck. 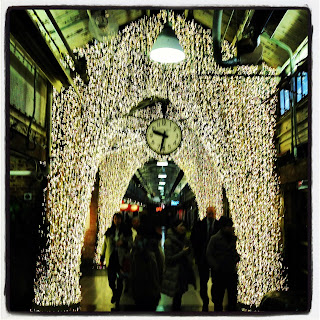 The kids were playing scientist all week for some reason: 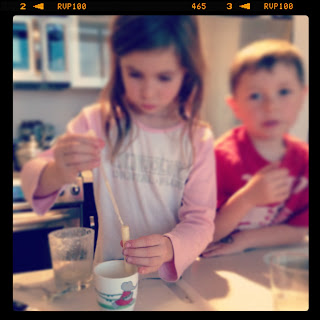 And Holden and Ella continue to have lessons from Kiara - Spanish tutor for Holden and piano teacher (in Spanish) for Ella.  Ella's homework this week was to write her own song.  This is my favorite photo of the week: 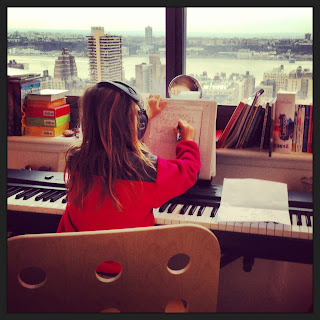 We're now off to see the play Cinderella in Spanish at a Puerto Rican theater (not even kidding).  More on that later...