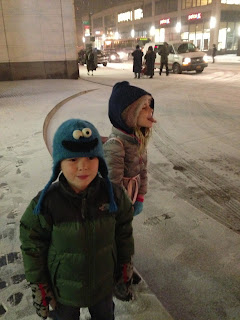 Two of the things we were most looking forward to came to fruition for us on our first full day in New York City.  For the kids it was snow.  On our very first day, it snowed!  The kids squealed with delight as they had a snowball fight with Kevin (they knew better than to throw them at me).

And for me, it was being able to finally walk to amazing restaurants without having to shlep in a car for 30 minutes.  My last restaurant meal in California was to a Mexican restaurant because I was warned that I wouldn't find any good Mexican restaurants in NYC.  And ironically, on our first night out we wandered a block away and found Cafe Frieda - a delicious, high-end, Mexican restaurant.  I had some scrumptious poblano stuffed with sweet potato and smothered in mole with pumpkin seeds on top.  We both had a couple Margaritas each, since hey, we're not driving.

Before dinner though we rented our first Zipcar to take us to IKEA in Brooklyn to get stuff for our new home.  A pretty seamless experience - there was a car available in the parking garage next door and Kevin did well driving in NYC for the first time.  Did you know that you can see the Statue of Liberty from IKEA Brooklyn?  A little bit of sightseeing while shopping. 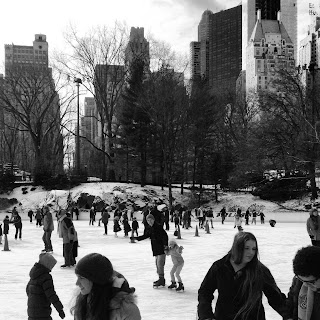 We had promised the kids that we could do whatever they wanted on Saturday and Sunday.  No unpacking or shopping or setting up the apartment.  Ella chose ice skating in Central Park.  Holden had no interest which was fine with me because we got to stay warm in the observation room.  Although Ella looked as though she was being tortured the entire time, she came off the ice beaming and asking to do it again soon. 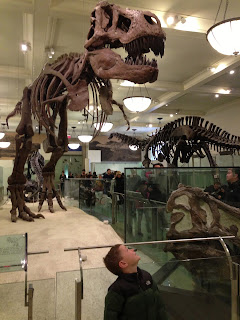 Holden's choice was the American Museum of Natural History.  Surprise, surprise.  If you know Holden you are likely aware of his obsession with dinosaurs.  It was awesome watching him run into the museum shouting out the names of all the dinosaurs...without even reading a single sign.  He knew them all.  This is Holden's heaven.  Luckily we got a family membership and he's already been begging all week to go back this weekend.

The vacation is coming to an end.  School starts on Monday!