Well, it was another amazing week here in NYC.  Kevin and I haven't celebrated Valentine's Day since long before kids but we have such a long list of must-try restaurants that we used it as an excuse to get a babysitter and get out.  We went to a very romantic, underground (literally) place called Shalel.  It's a Moroccan restaurant that has very little signage outside and you go down these stairs (covered in rose petals - apparently not just on Valentine's Day) and through almost a tunnel into a dark, brick walled, candle-lit room.  The room has lots of different nooks and crannies so wherever you're sitting you're pretty much alone.  The food was good and we had a nice long walk home and even popped into a local bar on the way home for a last glass of wine.

I went to my first PTA meeting at the school on Friday.  It's nice to be able to get involved with the school and I also met a few more moms.  On my way out of the meeting I saw this coming down the hall with bells ringing and drums beating: 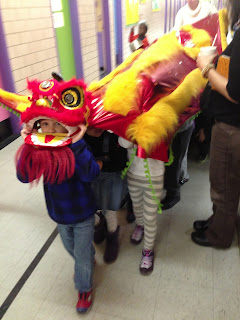 I quickly recognized Holden's shoes underneath.  As he walked by me he gave me a swift kick in the chin!  He hadn't even looked out from under the dragon - I guess he recognized my shoes, too :)  I love that his class did this for Chinese New Year's.

Friday night was the rescheduled Valentine's Day party at school (cancelled due to the blizzard last week).  After school Ella's friend Maeve came home with us for another play date and then her family met us at our apartment and we all went over to the school together for "Noche de Amor".  We still don't have a couch or chair to sit on so it was a little awkward standing around in a circle in the middle of the apartment with Maeve's parents without anywhere to sit.  The couch is supposed to arrive tomorrow - can't wait.  The kids had a great time at the party.  Lots of games and food and candy and an art auction.

Then Saturday morning we decided to try a Dim Sum restaurant recommended to us.  The big Chinese New Year parade was the following day (Sunday) so we got to see lots of smaller dragon dances - practicing for the big parade the following day.  There was lots of celebrating going on, lots of firecrackers and confetti.  The restaurant was ENORMOUS!  The size of a football field.  And it was packed.  As a matter of fact we waited at least 30 minutes to get in.  But it was worth it.  Delicious dumplings and two different dragon parades made their way through the restaurant while we were there with much drumming.  The kids loved it. 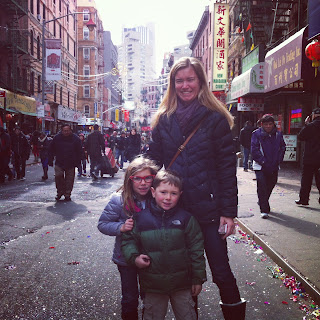 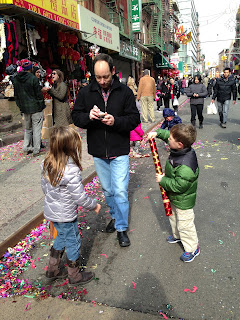 We had a relatively quiet day on Sunday.  My old friend Andi from grad school in Hawaii lives in New Jersey and now has three kids - all about the age of our kids.  They came over for the first half of the day and the kids got along like best friends who had known each other for years.  The original plans were to go out to a Children's Museum but they were playing so well together that we just hung out at the apartment the whole time.  It was really nice to catch up with Andi and meet her kids.  We'll hit the Children's Museum with them in a few weeks. 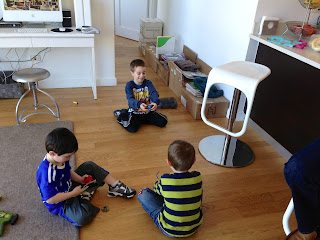 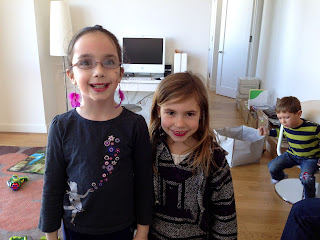 The four of us just read and relaxed in the afternoon so on Monday morning we all had the energy to get back out into the city again.  It was President's Day so Kevin was home again.  We decided to visit the Intrepid Sea, Air & Space Museum which is housed on an old aircraft carrier, permanently docked in the Hudson River.  Since we had to get off the subway at Times Square to get there, we decided to surprise the kids with a quick visit to Times Square.  They've been reading The Cricket in Times Square every night with Kevin this week so they've been dying to see it.  They were pretty overwhelmed. 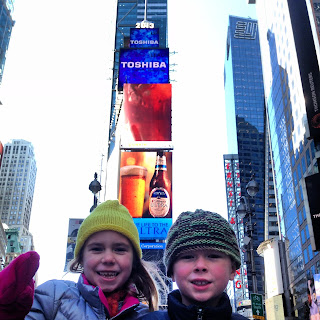 And of course since we were there we had to hit the Toys R Us which houses a full size, operational Ferris Wheel inside as well as a life-size T-Rex.  I think the kids think we've moved to Disneyland. 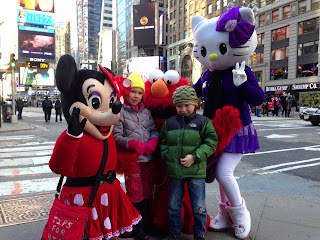 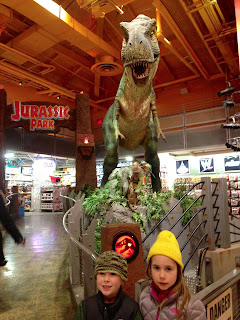 When we finally dragged them out of the store, we made our way to the Intrepid (with a quick stop over for Ramen in Hell's Kitchen).  The photos here look sunny but believe me, it's bitterly cold out.  The Intrepid is having Kid's Week this week which means they had a bunch of special activities and exhibits for kids.  The theme today was "Science Fact meets Science Fiction" so there were Star Wars characters wandering around and a stage with some kid plays going on.  We got to go down into a real submarine and saw dozens of airplanes used in battle and even saw the real Concorde that was retired in 2003.  Again, I don't think the kids can quite figure out how they got so lucky. 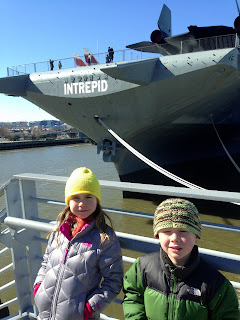 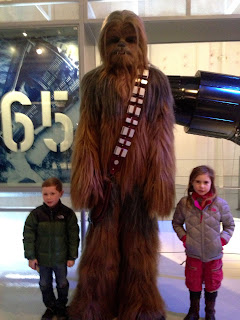 Today is Tuesday and the kids are still out of school.  They were supposed to have the entire week off of school for "Mid-Winter Break" but Hurricane Sandy closed down school for 3 days so the school district took them back out of this week's break.  Which is fine with me because after this weekend I'm exhausted!  I did promise them a trip to The Natural History Museum today if they get all of their homework done.  But frankly, I'd be happy to lay around and read all day instead.  If only we had a couch...