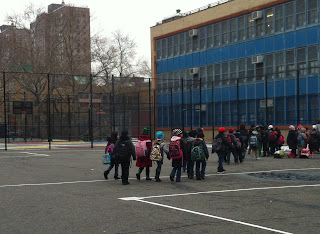 Monday was the kids' first day at a huge, urban, public school, starting mid-year and they were completely fearless.  I really have been bursting with pride all week.  Ella was really excited to start a new school and meet new friends.  Holden was lukewarm but not because it was a new school.  He was just enjoying being out of any school for the last five weeks.  But he didn't complain or get clingy.

Kevin took Ella to the playground where the older kids gather in the morning while I took Holden to his classroom (which is in a portable behind the main building).  He and I walked up and Mrs. Mamdouh opened the door and grabbed his hand and shooed me away.  That was it.  No lingering, not even a hug goodbye.  Over in a second.

Kevin and Ella were apparently hanging out on the playground waiting for the bell to ring when a little girl and her father walked up.  The father asked, "You wouldn't by any chance be Ella?"  Apparently Ella's teacher had told the class on the previous Friday that they were getting a new classmate on Monday.  Maeve immediately took Ella's hand and walked her over to the line.  The photo above was taken as they walked into the school (Ella's wearing the light blue hat).  Pilar is holding her other hand.  That's how her P.S. 163 experience started for her - by being led into class with both of her hands being held by new friends.  Second grade girls are awesome.

On Tuesday we met with each of their new teachers.  I was so impressed that they each spent almost an hour with us.  They discussed the curriculum and testing, asked us to describe the kids to them.  They really wanted to get to know them.  Mrs. Bautista, Ella's teacher, said that she wanted to give Ella a few days to settle in and start to trust her before she evaluated her.  If it turns out that Ella needs some additional help (as I assume she will, especially with writing and spelling in English since she's only done it in Spanish so far) then the school has two options, both for free.  There is a daily after school program run by volunteers (seniors and parents) who provide one-on-one tutoring for the students.  The other option is before school at 8am with the teachers.  All the teachers come in early to work with their students who need extra help.  Then they get a free breakfast and are sent off to class at 8:40.  I am just so impressed with the New York school system so far.

Holden's teacher had already evaluated him and had nothing but wonderful things to say about him.  He's reading at the top of his class (even though he's only been taught to read in Spanish so far).  She's been teaching for 23 years and is planning to retire after next year.  She said if she could be guaranteed that all of her students would be like Holden she'd keep working another 5-10 years.  My eyes filled with tears and I had to hold my breath for 10 seconds to make sure I didn't completely break down.

We've already been invited to dinner at Maeve's house.  Her parents seem like people we'd be friends with.  Her father even works in Digital Media like Kevin.  First friends!

Please leave comments so I don't feel like I'm typing to the void!
xo
Posted by Gretchen at 11:09 AM