A Visit From Nemo!


Another exciting weekend!  Friday afternoon our first blizzard started coming through town.  And the kids were pretty thrilled that it was named Nemo.  The Mayor had ordered all cars off the streets after noon and the snow started coming down.  That didn't stop the Friday Farmers' Market from taking place in front of the kids' school though. 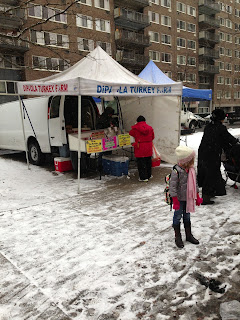 And there were plenty of customers!  New Yorkers are hardcore.

It did mean that the Valentine's Day party at the school scheduled for Friday night was cancelled though.  We made it up to the kids by walking to our neighborhood sushi restaurant.  It was a little eerie.  There were very few people on the sidewalks (and no children) and only a few taxis and delivery trucks on the roads.  The quietest I've seen the city, yet.  The sushi was good and again I was so happy to just be walking out to a yummy restaurant.

Saturday we headed on the subway up to 169th St. for brunch at our new friends' house.  Ella's little friend Maeve and her family had us up to their apartment for a delicious brunch and sledding.  When they asked if we wanted to go sledding I assumed that we'd just pull the sleds around out in front of their building but instead we hopped on the subway and took the train to the last stop north, at the tip top of Manhattan island. 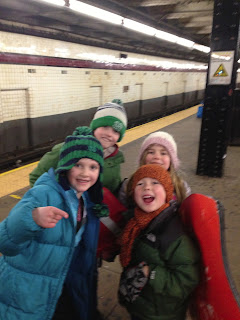 Here are the kids waiting with sleds in hand for the subway - so urban!  We were taken to what is supposed to be a gorgeous park in the Spring and Summer, The Cloisters.  This weekend it was just a giant swath of white snow with dozens of kids and their sleds. 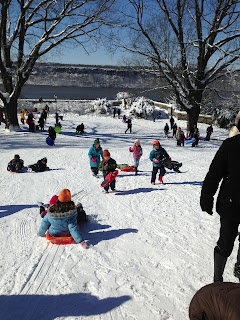 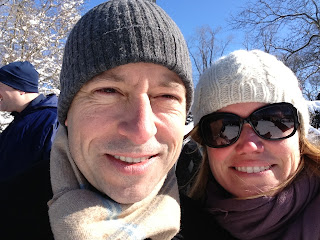 Even though we don't have snow pants or snow boots, the kids had a fabulous time.  Coming home soaking wet on the subway was a bit of a nightmare but we all hopped in a hot shower as soon as we got home.

That night, we had already lined up a babysitter (our college student from 2 floors down) to babysit.  We were supposed to go out with our friends Katharine and Paul (the only couple we really knew upon arriving in NYC) but their flight from Las Vegas where they had been all week for a conference was cancelled due to Nemo.  I never want a babysitting opportunity to go to waste so instead of cancelling her, Kevin and I had our first date night in New York.  We checked out a restaurant recommended by our new friends Sharon and Stefan, The Mermaid Inn.  Delicious seafood and very cool atmosphere.  On our walk home we popped into a local bar for a glass of wine.  Perfect evening.

On Sunday Kevin and the kids let me sleep in until 9am!  This really does feel like a vacation.  Then we walked all the way through Central Park over to The Metropolitan Museum of Art.  Back in California Kevin and I had started a tradition several years ago of Sunday Morning Museums (in place of church).  When the weather is really nice, museums are sometimes replaced with a hike.  We really want to keep up the tradition here and it should be very easy.  The Met was actually Holden's idea this weekend because he read somewhere that they have mummies.  And they do: 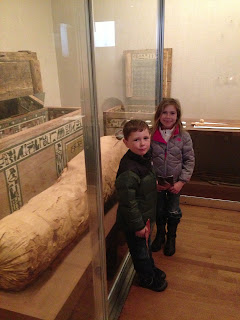 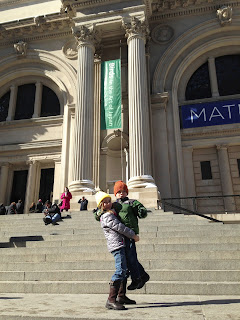 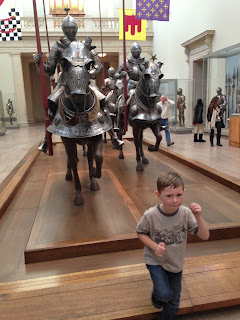 The museum is unbelievable.  Being one of the largest museums in the world we of course had to get another Family Membership because we will definitely have to come back many times to try to cover it all.  In addition to the Egyptian exhibits we also checked out the Matisse exhibit which will only be here a little while longer.  The kids actually recognized some paintings from a children's book on artists that we had in California.  The museum also has a branch up at The Cloisters where we were sledding yesterday so we can check it out again when the snow melts.

The walk through Central Park was absolutely gorgeous.  The sky was sunny and there were hundreds of people enjoying the park.  Lots of sledders and walkers and even skiers!  I was shocked. 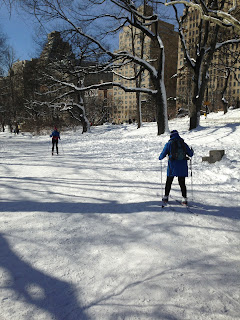 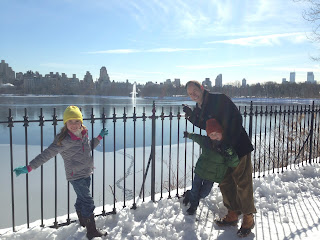