A Couch with a View 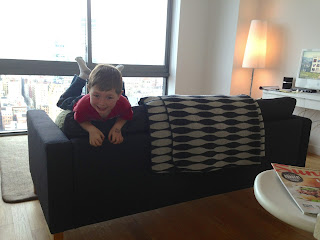 The couch has finally arrived!  It's amazing how much more homey and less hotel-like it makes the apartment feel.  I realized that our minds play tricks on us.  The apartment looked so small when we first walked in and it was completely empty.  Then, the more furniture and stuff we put in it, the larger it feels.  It's as though your mind says, "If they can fit that much stuff in here, it must be a big room!"

I've also realized (not surprisingly) that having a small apartment and living within a few blocks of everything I need, means I have a lot of extra time.  I can clean the entire apartment top to bottom - vacuum, dust, clean bathrooms and the kitchen - in about an hour.  In San Mateo, that would have taken me most of the day and wouldn't have happened in one day but spread over a few days, which meant I felt like I was constantly cleaning the house.  Also, the other day I left the apartment at 2:42pm.  I went downstairs to Whole Foods and bought everything I needed to make dinner.  Came back up to the apartment and put everything away and then walked to the school to pick up the kids.  I arrived at Holden's classroom a couple minutes early.  They get out at 3.  Seriously, in San Mateo that set of errands would have taken me easily and hour to an hour and a half.

It also means that our mornings are SO much more enjoyable than they were in San Mateo.  In San Mateo, our house was a battlefield between 7 and 8am.  Easily, the most stressful 60 minutes of my day.  I nagged and begged and threatened the kids until they got dressed, ate breakfast, brushed their teeth and packed their backpacks.  By the time I dropped them off at school I needed a stiff drink.  Now that we live right next door to the school and our commute time is dependent only on how many people get on our elevator on the way down, we have an entire extra 30 minutes to linger, take our time eating breakfast, get dressed, enjoy a second cup of coffee.  It starts all of our days off on such a better foot.

So I did end up taking the kids to the Natural History Museum last Tuesday - our new home away from home. 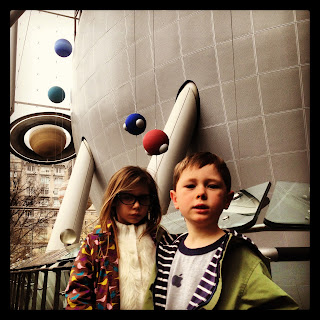 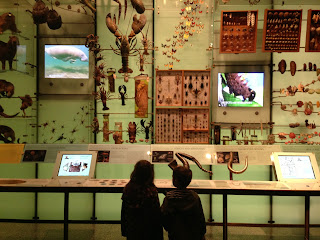 We got to see a show at the Hayden Planetarium which was pretty amazing.  Holden was a little scared flying through space and spent much of the show curled up in my lap.  We have still only hit a fraction of what the museum has to offer.  It'll be the best value membership we've ever bought.

Then Friday night we tried Dominican food for the first time.  The kids were a little confused in the restaurant.  Most of the clientele were Dominican (which we took as a good sign).  The kids couldn't figure it out - they were all speaking Spanish but looked more like African Americans.  Holden said, "Is this a Mexican restaurant or what?"  The food was delicious and it's right around the corner from us, so we'll be back.

Saturday we made it to Kevin's mecca: The New York Public Library by way of Grand Central Station. 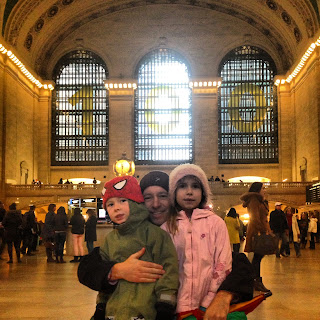 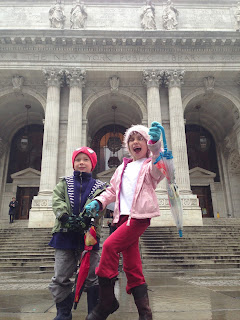 Front steps of the library

The library is pretty incredible.  First of all, it's HUGE.  It's the entire city block.  And it's gorgeous.  Holden said it looked more like a museum than a library.  And it is a bit of both.  We got to see the real, original stuffed animals that A. A. Milne bought for his son Christopher Robin that inspired the characters in Winne the Pooh. 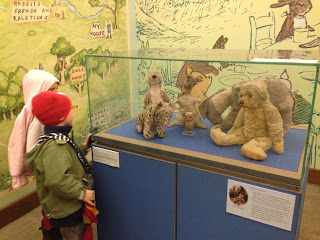 They're kept in the Children's Library section which itself is about as big as our entire local branch library in San Mateo.  We also saw the Gutenberg Bible - the first book printed in the West, from the 1450s. 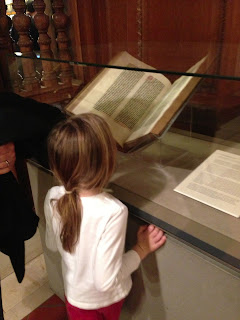 We originally went to the library in the first place to see a performance by a Grammy-nominated kids band called the Pop Ups, which was fun and wandered around some more and got our very own library cards.  All for free! 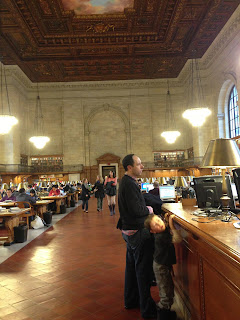 And of course on the way home, Kevin had to stop for a cocktail at The Algonquin Hotel.  Apparently, it was where the famous literati of the 1920s drank and intellectualized.  The drinks must have been a lot cheaper then, because apart from Danielle Steel and J. K. Rowling, I don't know any writers who could afford a drink there now. 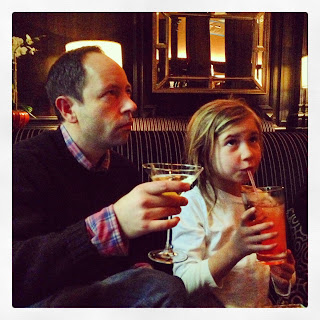 Ella was impressed though.  We walked in from the rain and Ella looked around at the chandeliers and said, "Now this is more like it!"

Kevin left at the crack of dawn this morning for a 3 day business trip to Phoenix so I'll be flying solo.  First stop today, the theater!